The series was conceived when Dan Levy wondered how wealthy families, as frequently depicted on American reality television, would react if they were stripped of all of their money. He further developed the series with his father, before pitching the series to several networks in Canada and the United States. The series was first sold to CBC Television in Canada and secured final funding to be able to start production in its sale to Pop TV in the United States, where it debuted on February 11, 2015. Although limited in popularity throughout its first few seasons, the series’ appearance on Netflix after its third season is credited for the show’s sudden rise in stature, attributed to the “Netflix bump” and a dynamic social media presence.

Schitt’s Creek received critical acclaim, particularly for its writing, humor and acting. The series has won various accolades, including two ACTRA Awards and 18 Canadian Screen Awards. It is the first Canadian comedy series to be nominated for a Critics’ Choice Television Award for Best Comedy Series. It also received two Screen Actors Guild Award nominations, including Outstanding Performance by an Ensemble in a Comedy Series and a total of 19 Primetime Emmy Award nominations, including Outstanding Comedy Series twice. The show received 15 of these nominations for its sixth and final season, setting a record for most Emmy nominations for a comedy series’ final season. For its portrayal of LGBTQ+ people, the series was nominated twice for a GLAAD Media Award for Outstanding Comedy Series, winning once.

At the 72nd Primetime Emmy Awards, the series’ final season swept all seven major comedy awards (the first time for a comedy or drama series) — Outstanding Comedy Series, Outstanding Writing, and Outstanding Directing for Dan Levy (the last shared with Andrew Cividino), and setting a record for winning all four major acting categories (Lead Actor/Actress and Supporting Actor/Actress) for O’Hara, Murphy and both Levys. At the same time, the series set a new record for most Emmy wins by a comedy series in a single season, beating The Marvelous Mrs. Maisel’s 2018 record. 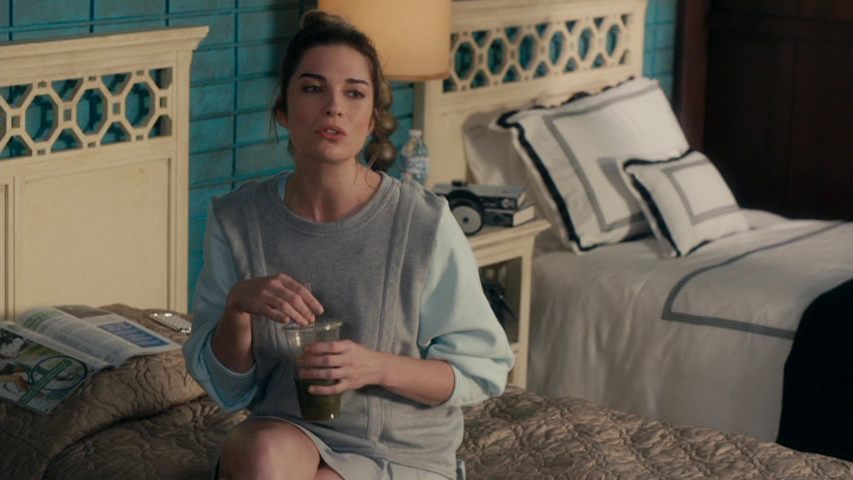 At first, sitting down with Schitt’s Creek, I was hesitant.  Honestly speaking, I wasn’t much of a fan of the very first season; but, this is a common reaction to a lot of shows, so it deserved to be persevered.  Boy, am I glad that I did because the comedic genius that is the Levy father/son combo really shined with this show and made the overall experience significantly worth it.  As you watch along, you will very easily find yourself engulfed in what’s happening within the storyline, laughing your ass of at the reactions and shared experiences that are had by the lead family.  Growing with them as they adjust outward from their moves in life from being rich and fabulous with everything, the show in its entirety was wholesome to watch and overall made for a fantastic time. 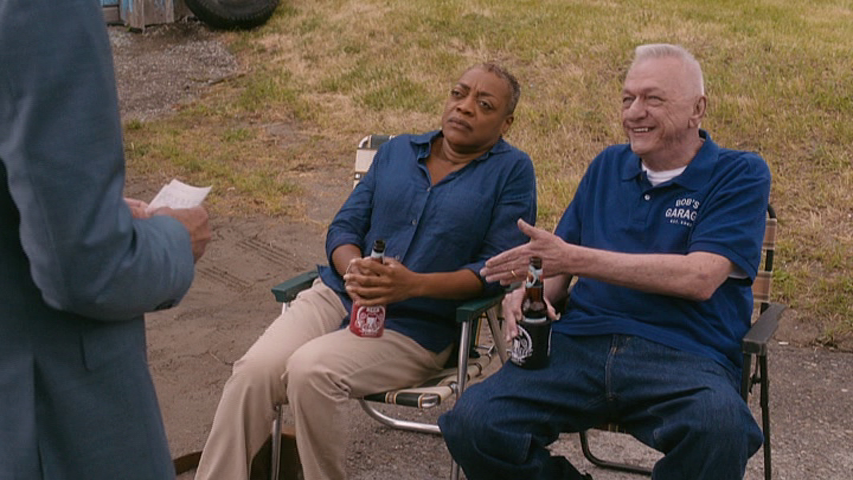 The DVD copy of Schitt’s Creek: The Complete Series looks just as you would really expect any standard televised show to look on DVD.  Sure, it’s not considerably high definition; but, the upscaling that my Blu-ray player did at making the image look better was definitely noticed.  There weren’t really any parts that stood out more than others; and everything was clean and able to be seen without having to add any extra focus to the scene.

Bundled with a Dolby Digital 5.1 audio mix, the DVD release of Schitt’s Creek: The Complete Series really does a solid job at bringing the story around you from all possible sides.  Dialogue is spoken cleanly, and everybody was able to be heard and understood without having to rely on the use of subtitles or bumping the volume levels up any. 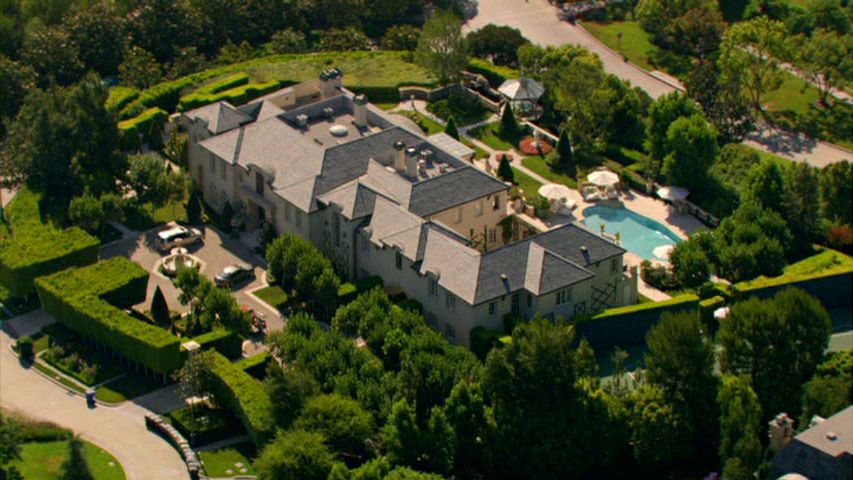 The DVD release of Schitt’s Creek: The Complete Series comes packaged in one of those gigantic hard-shell multi-disc DVD cases that you can normally find with complete series collections like this.  Personally, I’m not a fan of these styles of packaging; but they are definitely better than any release like this that could come in those thicker cardboard sleeves.  There aren’t any digital copy redemption pamphlets included with this release; but, there is a slipcover that’s been included that features the same artwork as the case.  All six seasons of the series is packaged within. 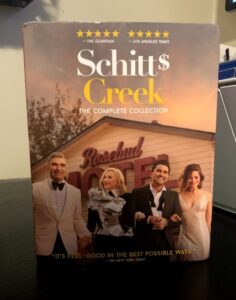 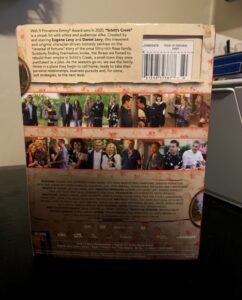 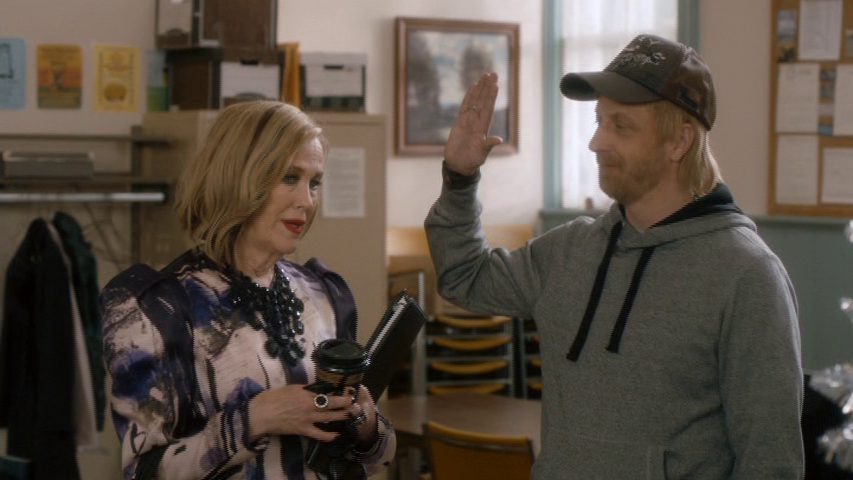 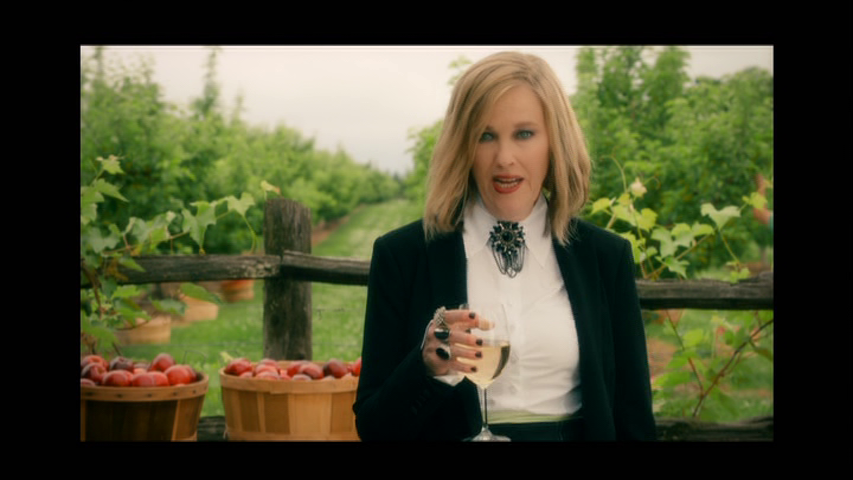 I was honestly very surprised with this show.  Watching the first season was rough, very rough; but, once the show really started to take off it just skyrockets from there and does a very beautiful job of doing it.  The visual and audio presentation of the series as a whole looked really good; in fact it was pretty much better than anything I can get with my OTA Antenna.  The special features being unique to each season were a nice touch; and overall, I was really happy that I was given the opportunity to review this release.  If you’re considering it for your collection, I would without a doubt recommend picking it up.  Schitt’s Creek: The Complete Series is available on DVD today.