Pitch Black was the final film credit of PolyGram Filmed Entertainment, which merged with Universal Pictures during production. It was shot on a modest budget of approximately $23 million. Despite mixed reviews from critics, Pitch Black was a sleeper hit, grossing over $53 million worldwide and developing its own cult following, particularly around the antihero Riddick. A sequel, The Chronicles of Riddick, was released in 2004 by Universal Pictures, with Diesel back as the title character and Twohy returning as writer and director. A third film, simply titled Riddick, was released in 2013, with Diesel and Twohy reuniting once again.

Pitch Black is a movie that I’ve enjoyed with every viewing I’ve had the pleasure of carrying out. The way that Twohy uses his characterization, the visuals, and the overall ability to tell a story without missing a beat. While it isn’t a part of my top-10 films; it is definitely one that I’ll enjoy from time to time.

This UHD release of Pitch Black offers an extremely fresh, bright and overwhelming new scan into the tales it seeks to share. Boasting its use of Dolby Vision, it was pretty amazing to think that this movie is able to be improved upon significantly (the previous Blu-ray, which I’ve had for a while had me at bay until I got the opportunity to check this copy out. The finer details of things, like the spacecraft and the various blood spattering really popped in this release. I didn’t really notice much in terms of DNR; but then again DNR never really bothered me.

The UHD release of Pitch Black is packaged with an English DTS-HD Master Audio 5.1 lossless audio track courtesy of Universal Studios. As much as I would have preferred to experience this movie with the Atmos effect, the decision to use the previously made DTS track still wasn’t all that bad. It still packs one hell of of a punch and makes sure to place you right into the middle of everything. The transitions between channels were effortless and the dialogue was spoken cleanly that it allowed for everyone to be heard and understood without any issues.

Arrow Films’ 4K release of “Pitch Black” comes packaged in the typical single-disc case that’s made out of a thicker plastic, much like many other Arrow releases. In that case is the 4K copy of the movie. There are no Blu-ray copies included, nor are there any digital copy redemption pamphlets. It’s a simple setup and perfectly represents the film at hand. Unfortunately, there are no slipcovers available for this release at this point in time. 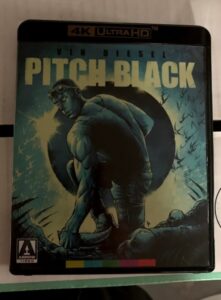 There’s a number of special features that come with Pitch Black. I was really excited to see them all included on the UHD disc and not be an extra Blu-ray disc. The content that’s included offers a nice look at the production work that went into the movie as well as some of the experiences that were shared among cast members. Included with this release is:

Pitch Black is and always will be a solid science-fiction/thriller film that features the one and only Dominic Toretto (/s).  Everything about has been significantly enjoyable with every watch.  I am a huge fan of Twohy’s storytelling capabilities because it does great at grabbing and keeping your attention.  The visuals and audio elements that accompany Arrow Films’ 4K UHD release are simply top notch and I really have to applaud these folks at Arrow for constantly putting out top quality releases.  If you’re looking to add Pitch Black to your collection, I would absolutely recommend picking it up.  The 4K UHD release of Pitch Black is available to order today.