Mortal is a 2020 English-language Norwegian fantasy action film that was co-written and directed by Andre Ovredal. The film was inspired by Norse mythology, and stars Nat Wolff. Originally, Robert Sheehan was cast in the role.

Taking place somewhere in the Norwegian wilderness, Eric wakes up from a nightmare that’s managed to cause the trees outside of his tent to burn. He looks over his wounds and decides to head toward the town where he breaks into a clinic for medicine and candy. He treats himself in a gas station bathroom, while walking down a road a group of teenagers begin to harass him, to which he kills one of them with his ‘powers’ by simply saying “If you touch me, you will burn”. Eric is later picked up at a bus stop by the local authorities.

The film was released on February 28, 2020 in Norway and is being distributed by Saban Films. It is supported by a grant from the Government of Norway. The films dialogue is in English and Norwegian and most of the actors are Norwegian, with the exception of Wolff. The film’s original music score by Marcus Paus was nominated for the Amanda Award and as the Norwegian nominee for the Nordic Film Music Days — HARPA Award.

Mortal is a film that I had originally made snide comments or jokes about the underlying premise; only to end up following that premise in the end. The story starts off a bit slow there at the beginning, and the switching between the Norwegian and English tongue can be a little distracting; but overall, it wasn’t all that bad and I managed to find myself fully engulfed into this movie. There’s a significant number of questions that were left unanswered by the end of the movie; but it does set itself up for at least one sequel and I am really hopeful that they make a follow-up film because the insane left turn that the end of the movie takes had me all sorts of excited for what was about to happen, only to be greeted with the end credits.

Brought to us onto Blu-ray courtesy of Lionsgate Films, Mortal is shown in a 2.39:1 visual presentation that appears to have been digitally captured with what looks to be a 2K digital intermediate. The overall dark presentation to the movie shows a side of the mythological that I’d never really considered would happen in movies, and I thoroughly loved it. When the intensity picks up, you can’t help but find yourself glued to the television and this Blu-ray did an absolutely astounding job at making everything known visually speaking.

Packaged with an English DTS-HD Master Audio 5.1 mix, the Blu-ray release of Mortal packs one hell of a punch that tests the limits of your average home theater system. With the roaring bass portions when things are going crazy, to the environmental awareness of the various lightning strikes, this movie gave me goosebumps from beginning to end as it ripped through my home theater. Dialogue is spoken cleanly for the most part. The lines spoken in Norwegian are a little on the softer side; but it wasn’t distracting from the story that’s been told; while the English spoken parts were crystal clear and offered no hesitation whatsoever.  I do wish they would’ve opted for the use of Dolby Atmos with this movie because of the inclusion of the elevation aspect; but I can also understand that this wasn’t done simply out of budget concerns.

The Blu-ray release of Mortal comes packaged in the standard single-disc Blu-ray amaray case.  In that case, the Blu-ray disc featuring the same piece of artwork that’s been provided on the case.  While there are no DVD copies of the movie included, there is a digital copy redemption pamphlet that allows you to add the movie to your preferred digital providers locker.  There is also a slipcover that’s been made available in the initial pressing of the release that also features the same artwork that’s available on the case. 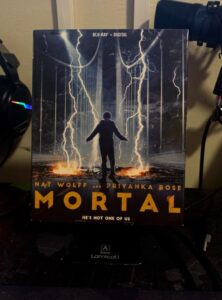 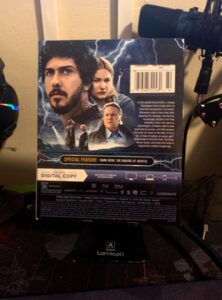 There’s really only one special feat1ure included with the Mortal Blu-ray.  The single piece that’s been provided offers some nice insight into the storyline, and while it may be considered to be a spoiler, the cover art for the movie as a whole does an equally good job at revealing a lot about this movie.  Included with this release is:

Mortal, like I previously mentioned, started out slow and was somewhat rough to get into at first.  But as the story develops, and we grow to learn more about the main character, it does a really great job at maintaining your attention as you too will likely seek out more answers.  The end of the movie, while it makes complete sense, was NOT what I was expecting at all.  The video and audio presentation of the Blu-ray release were really nicely done, despite my thinking it would’ve been better had they opted to use Atmos for the audio.  Special features on the Blu-ray are considerably lacking; however, I did appreciate the brief “making of” featurette that was included.  If you’re looking to add this movie to your collection, I’d definitely recommend checking it out while it’s on sale sometime.  Mortal is available on Blu-ray and DVD today.