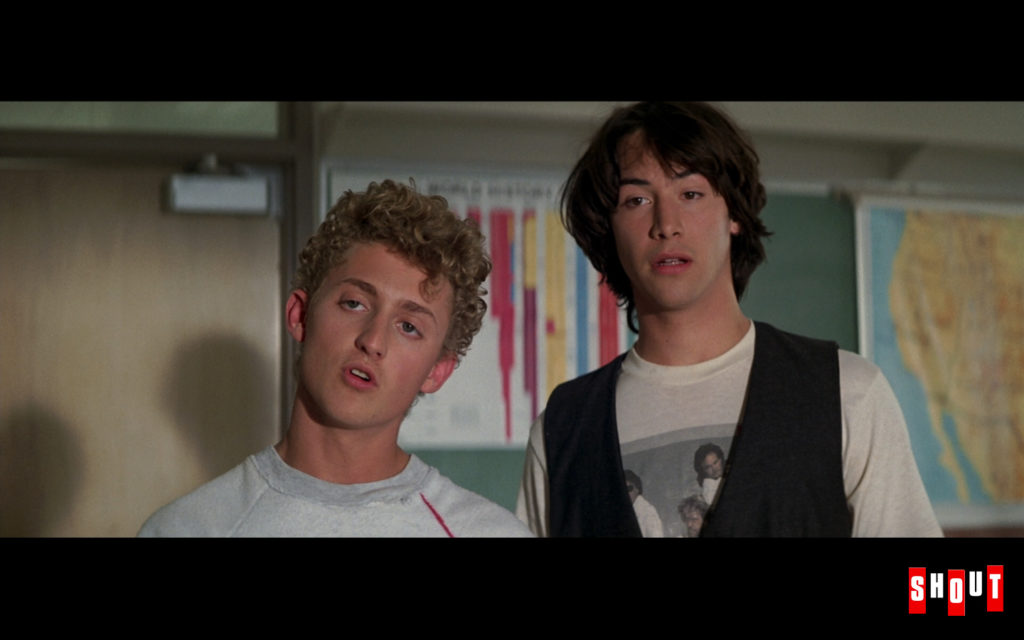 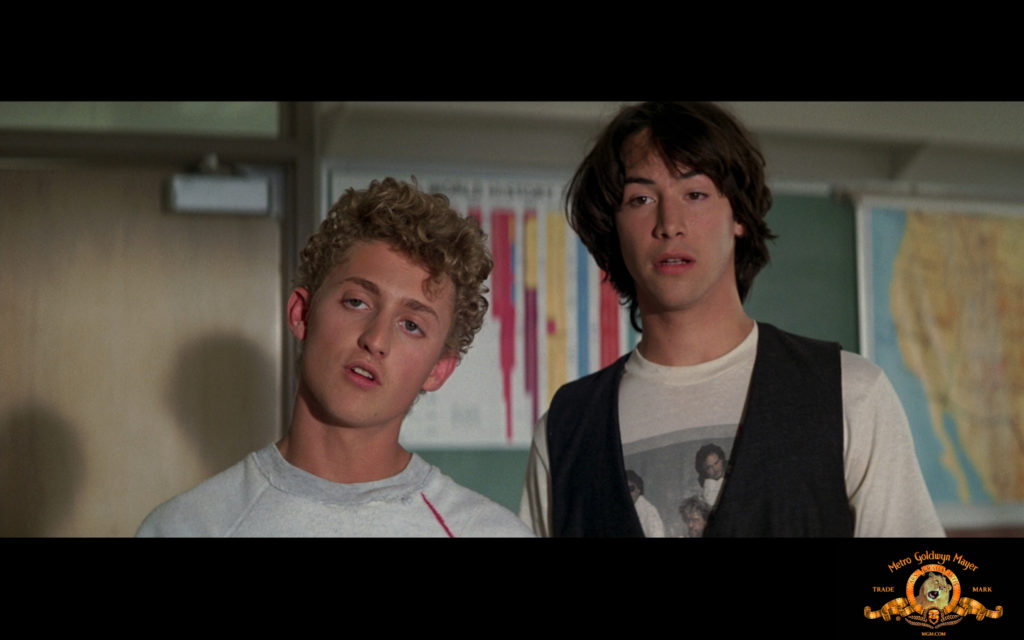 Since that initial 1988 release, Bill and Ted’s Excellent Adventure has routinely come home with audiences in many formats, seeing a Blu-ray release a few years back. Shout! Factory brings Bill and Ted’s Excellent Adventure back to Blu-ray with a new transfer and accompanies it with the first high definition release of Bill and Ted’s Bogus Journey. Never one to leave special features off their releases, Shout! has lined up a bevy of additional content for Bill and Ted fanatics. Does this release make the grade and save the future? Dial for the (near) future and let’s find out! 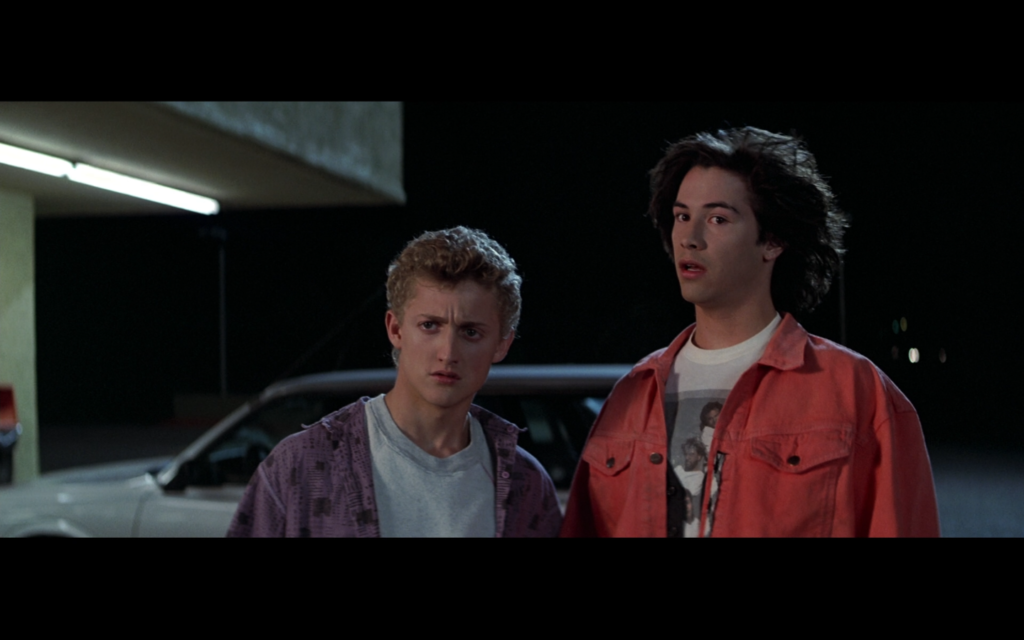 In Bill and Ted’s Excellent Adventure, Bill S. Preston, Esq. (Alex Winter, now an acclaimed director) and Ted “Theodore” Logan (Keanu Reeves, not always sad) are in trouble: their band, Wyld Stallyns, will never make it if Ted fails his history final and his dad ships him off to military school in Alaska. On the last night before their history presentation, Bill and Ted are visited by time-traveling guru Rufus (George Carlin) and told that passing their history final isn’t just important to them, but to the future of the world to come. Thus, the two go on a time-traveling journey, scooping up “historical figures” from Socrates to Sigmund Freud and running into more than a few bumps along the way.

Bill and Ted’s Bogus Journey sees the titular pair reunited with a new threat, this time from the future they eventually save. Killed and replaced by evil duplicate robots, Bill and Ted find themselves working with Death (William Sadler, really). With a little slacker ingenuity, Death comes around to helping out the duo in getting back to the mortal plane and arriving at the Battle of the Bands that serves as the launching point for Wyld Stallyns’ meteoric rise to fame and the beginnings of world peace. 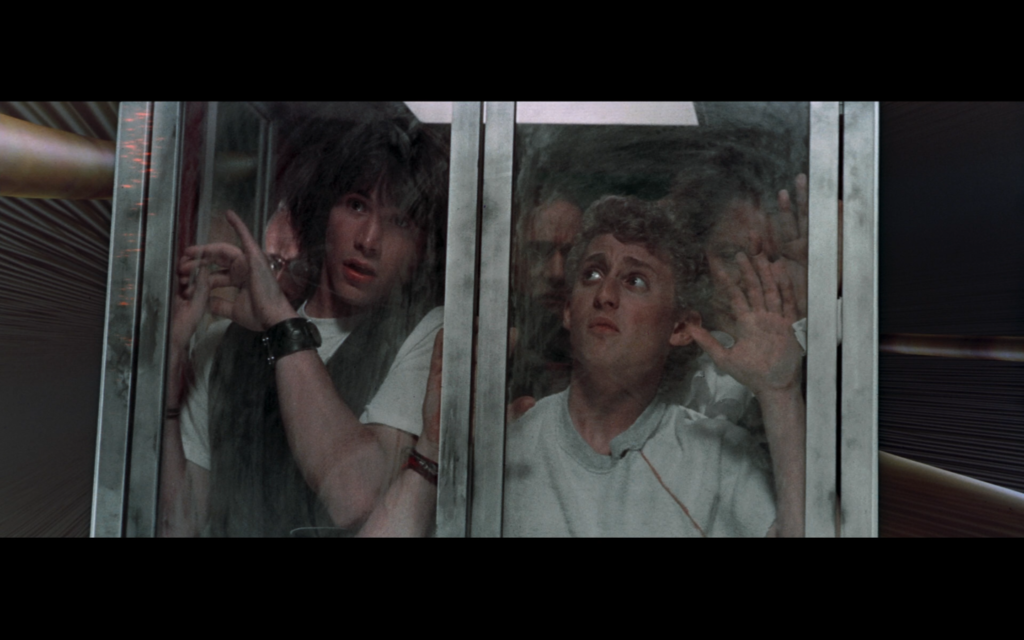 These films are insane. Each plot is crazy, filled with leaps in logic and suspension of disbelief that would ruin virtually any other enterprise, yet both of these films (yes, both) manage to pull it off due to an abundance of heart and earnest dedication to high concept film making. Winter is undeniably charismatic and Reeves dodges the critique of much of his acting ouevre by coming across as a fun-loving slacker with a heart of gold. Toss in the untouchable George Carlin and these films have a strong character core that allows the plots to work as they never overpower the strong character development at work. We see Bill and Ted work for their dreams and develop through the films, strengthening their unique bond and coming to accept their destiny as prophets of world peace. Not bad for two slackers. 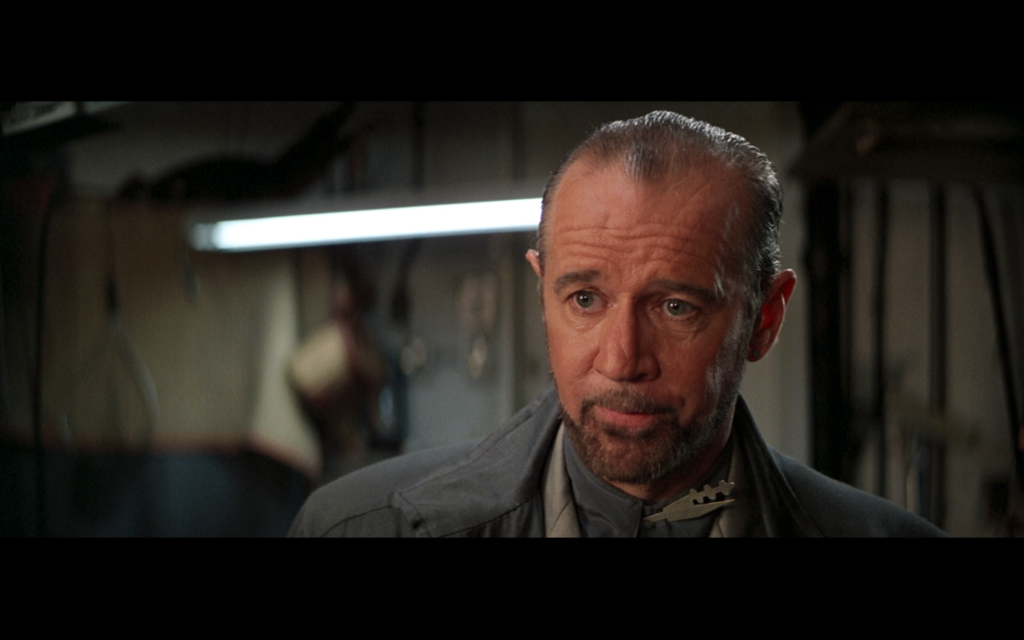 Shout delivers Bill and Ted’s Excellent Adventure to Blu-ray for the second time in a release that looks nearly indistinguishable from the previously released MGM Blu-ray. No record of a new scan is advertised or included in any advertising or packaging for this set, so I feel confident in assuming that this is the same scan used for the previous release. For owners of the previous Blu-ray release, this is both a blessing and a curse. On one hand, not having to repurchase the film if it’s not a priority release for a collector is always a welcome turn of events (save for the new special features), but it’s a bit of a drag to see the film not get the deluxe treatment that so many of Shout! and Scream Factory’s other releases receive. Contrast and color saturation are the primary issues with this film’s visual presentation, sharpness and clarity can suffer in deeply saturated scenes and grain is ever present yet not distracting. It’s a more than acceptable high definition scan, but there’s nothing extraordinary on display. 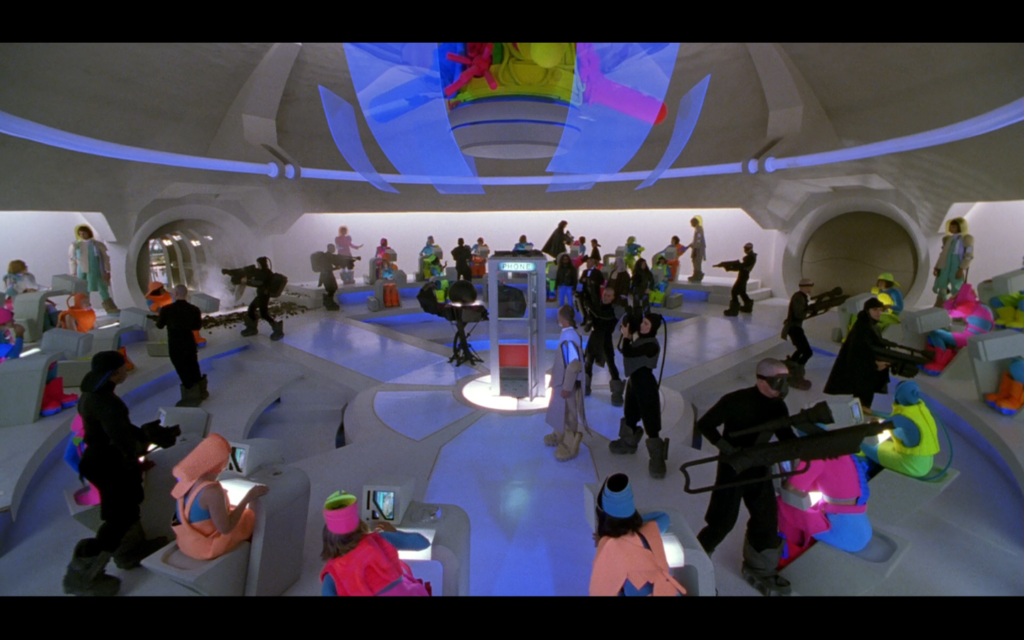 Bill and Ted’s Bogus Journey makes its first high definition appearance with a similar presentation to the earlier film: strong but unremarkable. Bogus Journey features more dynamically colored scenes than the original, particularly in scenes portrayed in the afterlife, and it’s in those scenes that clarity begins to suffer as colors blend together to blur sharp edges and lines. Blacks, on the other hand, are deep and sharp. I could entertain an argument where the presentation of Bogus Journey is slightly improved over that of Excellent Adventure, but that may have something to do with the fact that the second film tends to push the palette in ways that the first film does not. 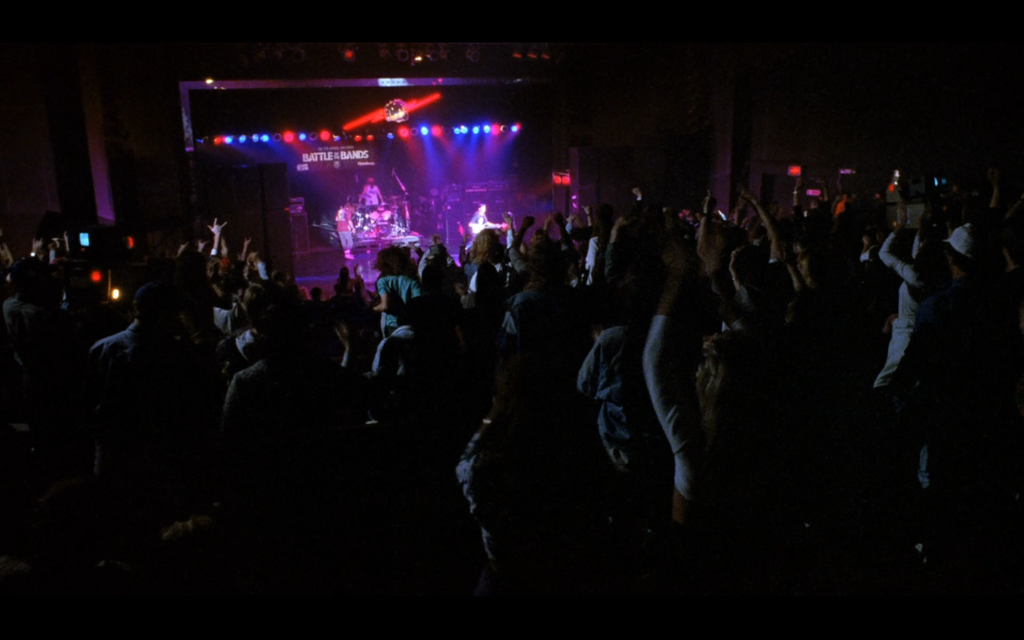 Both films arrive in this collection with almost identical audio presentations. Each comes with a DTS-HD 5.1 Surround and 2.0 Stereo track. Both surround tracks have a pleasant overall presentation with strong support for each film’s outstanding soundtrack, but muddling between conversations and sound effects, especially in the front speakers, is an occasional issue. The failure of both mixes to take full advantage of the full sphere of sound available in a 5.1 presentation makes them a nice addition, but the more even aspects of the 2.0 presentation may make it the preferred choice if watching the film in a less than ideal setting for audio clarity. 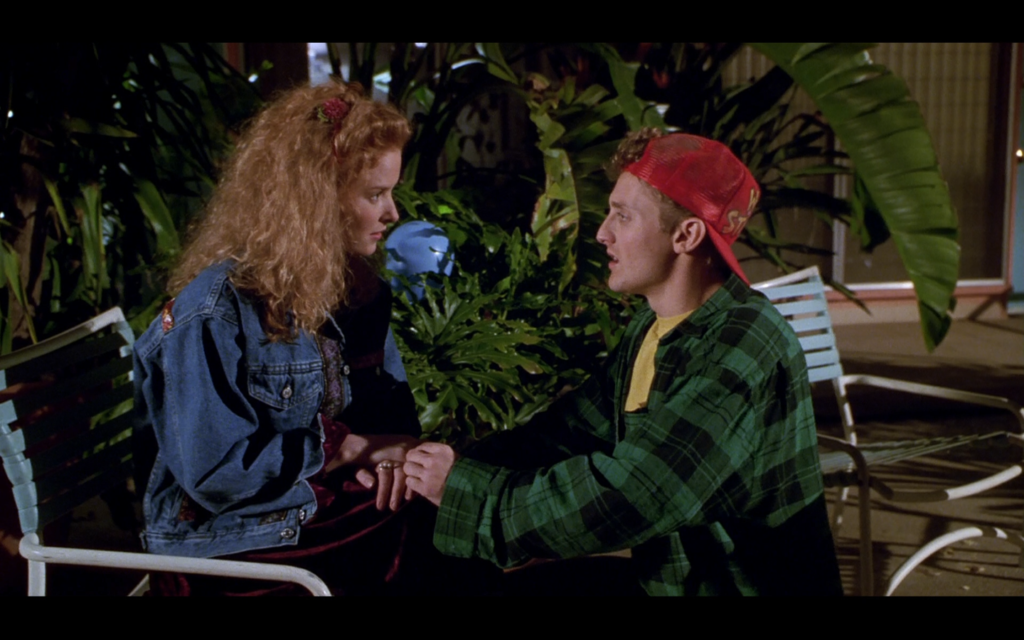 Shout! offers up Bill and Ted’s Most Excellent Collection in a bulky Blu-ray case with matching slipcover. As is common with their releases, new artwork has been commissioned for this release, produced by Paul Shipper. Shipper’s amalgamation of characters from both films is a fitting image to go along with this release. Included within the case is a black guitar pick with “Wyld Stallyns” on one side, a nice touch. The spine notes that this is Shout! Select release number 5. Shout! Factory has gone all out for this release, recording a slew of new commentary tracks for the films and producing two new engaging and entertaining documentaries that reflect on the production and release of both films. Shout! has also cherrypicked previously release featurettes to include as well, making this a most triumphant set! From Shout! Factory’s database: 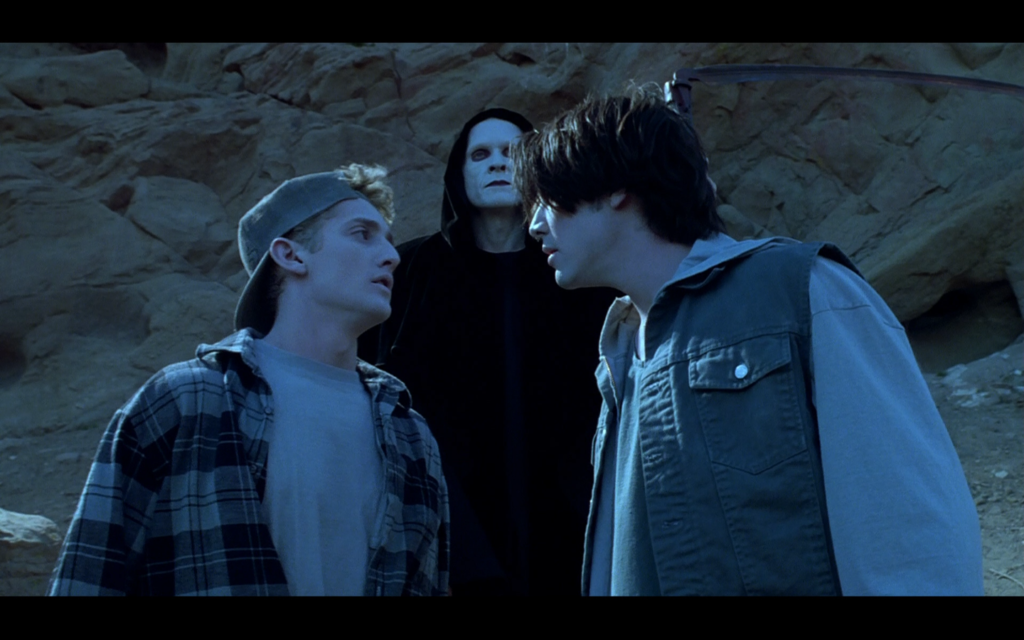 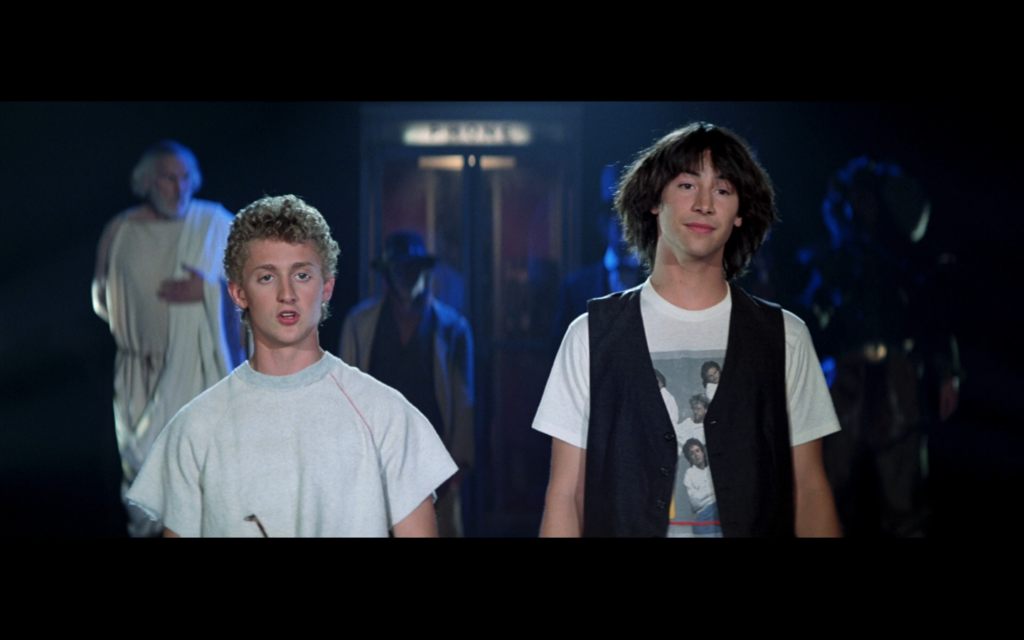 While this isn’t Bill and Ted’s first foray into high definition, Shout! has gone above and beyond in giving fans of the franchise the definitive collection of everyone’s favorite slackers. Bill and Ted’s Excellent Collection comes in a wonderful, sleek package with strong, if not remarkable, audio and visual presentations. While Shout! did not go out of their way to put together new scans, the quality is still very strong and will be a welcome addition to any home. If you’re already an owner of the previous MGM Blu-ray release, you’re not going to get a different presentation, but this collection does feature Bogus Journey on Blu-ray for the first time. In addition, Shout has produced a wealth of new featurettes and commentaries that are a treat for any Bill and Ted fan. This one is truly an excellent adventure.