Oh no, Disney made another talking-animals-who-wear-clothes movie. Did they not have a clue what would happen to this wholesome family film after the entrepreneurial members of DeviantArt caught wind of the subject matter?

Directed by Disney veterans Byron Howard (Tangled) and Rich Moore (Wreck-It Ralph) and featuring a very talented ensemble cast of voice actors (including character actors Idris Elba, Alan Tudyk, and J.K. Simmons), Zootopia was one of last year’s biggest hits in movie theaters. Zootopia’s loaded with gorgeously crafted effects, and has a ton of great individual scenes featuring fantastic bits of cartoon comedy as well as biting social commentary. Zootopia marks Disney’s best attempt at world building since 1988’s Who Framed Roger Rabbit. This isn’t a cutting edge drama, it’s a basic hero’s journey aimed at kids but don’t let that turn you off, Zootopia is one of this year’s must own films.

It’s great to have dreams. Yeah, just as long as you don’t believe in them too much.

The landscapes and biomes that Disney’s animators crafted for Zootopia are amazing, and must be seen by anyone who considers themselves a fan of animation. Under mandate from studio head John Lasseter, the filmmakers were told that making the world feel right was their first priority. They accomplished this by studying animal behavior and visiting mammals in their native habitats, even going on safari in Africa. This research gave them the ability to create a differentiation between a city where humans live and Zootopia’s mammalian city.

A large portion of Zootopia works as a social commentary on prejudice in a contemporary society. Main character Judy Hopps is an outsider who is ignorant to the cynicism and prejudices of her city-living counterparts. At first, this seems to place her on the moral high ground compared to the other characters. She faces a patronizing attitude from her boss, Chief Bogo, as well as her partner (in crime) and Popsicle hustler, Nick Wilde (Jason Bateman), neither of whom believe she has the chops or the size to be a police officer in rough-and-tumble Zootopia. However, as the plot progresses it becomes more apparent that she’s not as perfect as she would like to be. I found this introspective approach to making a morality tale to be rather refreshing. It’s not overly preachy and it presents the characters’ problems in a believable fashion. It’s a great lesson in humanity for both kids who are ignorant to prejudice, as well as those who face discrimination on a daily basis.

Life isn’t some cartoon musical where you sing a little song and your insipid dreams magically come true. So let it go.

Zootopia is a gorgeous film, filled by a rich, colorful world with hundreds of different animals and a wide variety of scenery. It is hard to find a more vibrant looking film than Zootopia. While a UHD release might benefit Zootopia’s broad color palette, until that becomes a reality the 1080p bluray does fantastic job relaying the movie’s world to your home theater. Rendered, edited, and mastered entirely in the digital realm, the picture is crisp and incredibly clean and does not suffer from film to digital conversion. The special features included on the disc are also all presented in 1080p, and look almost as good as the movie. Disney spared little expense in the presentation of Zootopia and it shows.

The breathtaking environments in Zootopia would not be possible without great sound work. Zootopia not only looks, but sounds like a real city. The jazzy orchestral soundtrack, while never overpowering, carries the film with grace. I listened to the film with my 2011 model Pioneer 5.1 receiver and while it does sound very good, there are a lot of better sounding movies out there. The visuals in Zootopia are reference quality, but in my opinion, the audio is only above average.

Shakira plays Zootopia’s premier pop singer, Gazelle, and is featured heavily in the soundtrack. Depending on your taste for latina-fueled pop music, this can be a good or a bad thing. I found Shakira’s contributions a little grating after my third viewing. Your kids will probably love her.

Zootopia can be purchased in an Ultimate Collector’s Edition 3D Combo Pack, a standard release Bluray/DVD/Digital combo pack, and Target exclusive versions of both the Standard and Ultimate release. All of these releases come inside basic slipcovered blue plastic clamshells. A Steelbook version has not yet been released in the US.

This review features the Target Exclusive standard Bluray/DVD combo pack version of Zootopia. This release isn’t quite as special as Target claims, but it’s nice to have a copy of the movie with a different slipcover. It’s also good to see that Target and Disney have learned their lesson and gone back to the basics after releasing an exclusive version of The Force Awakens in atrocious “birthday card” packaging. The Target slipcover features Judy Hopps and Nick Wilde taking a street selfie, and is bordered in Target Red instead of the standard blue slipcover Disney uses for most first-run releases.  Besides the Target slipcover, you still get the normal bluray clamshell from the standard release. I would like to see Disney include things like reversible cover art with their releases, but other than that, this is a nice looking bluray package. 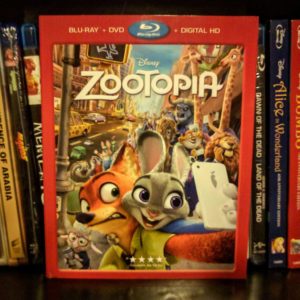 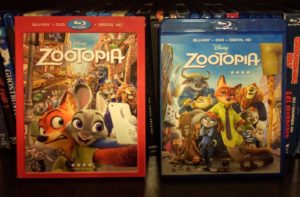 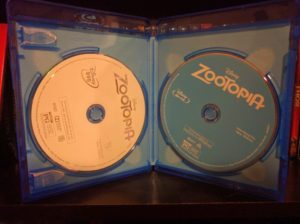 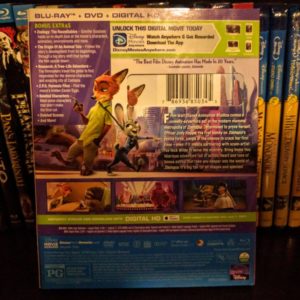 The Target combo pack includes all the special features from the standard release, as well as a code to access two exclusive featurettes with the Disney Movies Anywhere service. While I am a huge fan of Disney Movies Anywhere and its platform neutral approach to digital distribution, it is very disappointing that these featurettes cannot be accessed on the blurays. Exclusive content should always be included in the package and it shouldn’t require you to jump hoops to play it. This is pure laziness, Target and Disney could both do better if they want to make these exclusive releases genuinely special.

The documentaries, deleted scenes, and featurettes included on the bluray are all top notch and provide fascinating insights from the actors, animators, and other filmmakers. These videos showcase the artistic development behind the world of Zootopia as well as the problems Zootopia’s writers faced in developing a script. I would have enjoyed a commentary track, but for a variety of reasons Disney never includes audio commentary with its releases.

The “dunnah” (DNA) of these Lasseter-led Disney productions share many trademarks. Tangled, Frozen, and Zootopia are meant to represent a modernized and revamped Disney. While Zootopia pays homage to 1973’s Robin Hood, it doesn’t try too hard to mimic it. However, Lasseter’s CGI animators have created a film that stylistically bears more resemblance to the recent work of Dreamworks Animation than Disney’s classic pencil and paper masterpieces. Lasseter may have put his Pixar experience to bear when he brought Disney Animation back from the dead, but he didn’t want to simply copy and paste the formula he created at Pixar. Dreamworks made a better target for inspiration. Hybridizing the stylistic CGI of Dreamworks with a modernized interpretation of classic Disney has worked fantastically for Disney Animation. If you can’t beat them, then you best put a shit-eating grin on all of your characters. That having been said, it’s hard to fault Disney Animation too heavily for being a bit derivative when they’re putting out high quality CGI-animated films like Zootopia.

Zootopia is a must buy if you enjoy world building and animation, and if you’re buying this movie for your kids, they’ll find a lot more reasons to watch it over and over again. Pixar legend John Lasseter has done it again, adding another successful film to Disney’s catalog of Animated Classics.