As someone who has been a fan of 70’s and 80′ exploitation my whole life its a pleasure to live in a world where a company like Arrow Video exists. For every beloved cult classic they have cleaned up and released back into the world they have another 1 or 2 movies that you may have never heard of. Its these films that are the truly exciting releases because for most of us these are blind buys. Will we discover a new favorite slasher film or some action schlock that no one remembers? Maybe it’ll be a purchase we regret, a film that should have been left buried in the annals of cinema. Sometimes we get a release that’s a little bit of both and maybe even more often we get a release where I don’t know what to make of it at all and that’s just where Niko Mastorakis’ The Zero Boys comes in. 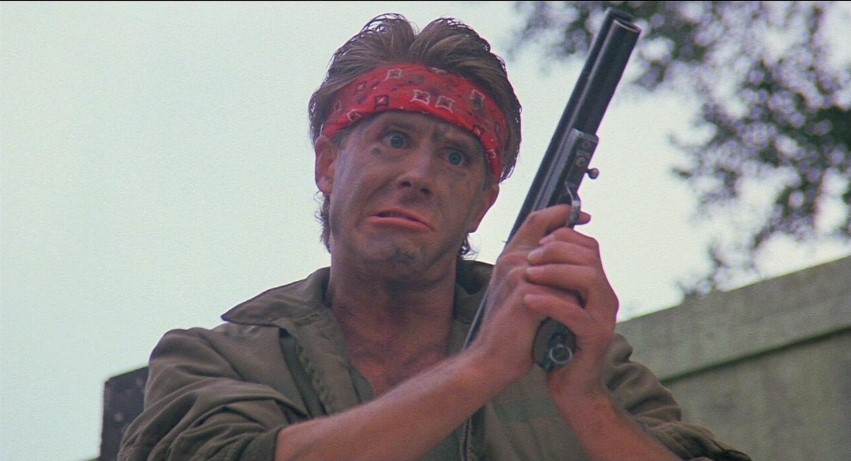 In anticipation of getting to review one of the newest releases from Arrow I did absolutely no research on director Niko Mastorakis, only knowing his name from the controversial video nasty, Island of Death, also available through Arrow Video. This being my first experience with the filmmaker my expectations were completely up in the air. What I got to experience was a melting pot of the 1980’s, a film that is self aware but is a combination of so many elements it never becomes it’s own thing. Is it an action movie like Mad Max or Rambo? A slasher flick like Friday the 13th? A surreal psychological thriller like an episode of The Twilight Zone? Definitely not. Maybe its just a backwoods standoff like Deliverance? Maybe its all of the above? Whats interesting about The Zero Boys is it lives in a world where these films exists. Our main lead Steve (Daniel Hirsch from nothing we’ve ever heard of) is immediately nicknamed Mad Max by our female lead, Jamie (Kelli Maroney from Night of the Comet). Rambo is not only mocked but seen on screen in the opening minute, Jason Voorhees is name dropped multiple times, The Twilight Zone theme is hummed jokingly, it’s almost fascinating how much this films acknowledges its older and more mainstream brothers from the time.

Our film opens with what seems like a violent shootout in an old west town between our heroes “The Zero Boys” and a band of baddies led by a Nazi general, in reality this is just the most involved and dedicated game of paintball you’ll ever witness. Fully automatic rifles shoot up dust and drop bodies which lay limp the duration of the game, then after some not so sportsman like tactics as we find out later, our three Zero Boys take victory in the tournament and decide to celebrate with a trip out to the woods for the weekend. Joining them will be “the prizes” of the tournament, the girlfriends of the other team. Cue some redneck maniacs with sharp weapons under the cover of a thunderstorm and we all know where this is going right? Or do we?

Yeah pretty much but with some interesting elements along the way. Our maniacs are not the “kill em and move on” types, they are sadistic and have a barn set up where they film the torturing of the victims. We also discover that our Zero Boys carry real guns with them to practice for the paintball tournaments? I know, that confuses me too. With this revelation to even up the odds and a couple of gruesome discoveries later, our Zero Boys and their girls suit up for a backwoods showdown to the death! The big problem here is it never really gets as exciting as it sounds like it should be, even for a lower budget flick.

Fans expecting some good bloodshed and a high body count will be disappointed like me, I’m sure. While we of course get some death and the crimson does starts flowing, the movie never really delivers in a way more bloodthirsty fans will enjoy. As you patiently await through the first half of the movie for the expected carnage in the second half the movie never catches a stride and it really comes to a lot of wandering around the woods with very little payoff. Now the caveat here is that what payoff we do get may be worth the whole journey. The climax of the film, which I’ll say is only about 2 minutes long, becomes very exciting and features one of the most extravagant uses of a taser I have ever seen.

I really did enjoy myself while watching The Zero Boys, but I don’t know if I could recommend the film to everyone. The characters are likeable enough and even pretty smart for this kind of film, the film looks great, and it has a killer score. Getting down to the brass tacks of it all though The Zero Boys is not a lost hidden gem by any means, it’s not unintentionally funny enough to be so bad it’s good, and its not violent enough to satisfy the gore hounds even though comparisons to “Hostel and Saw” are touted on the back of the box. The Zero Boys is a completely serviceable backwoods thriller that dips it’s toes into action and horror but ultimately only does everything completely average which depending on how you look at it, could make it worth your time or one for you to skip. 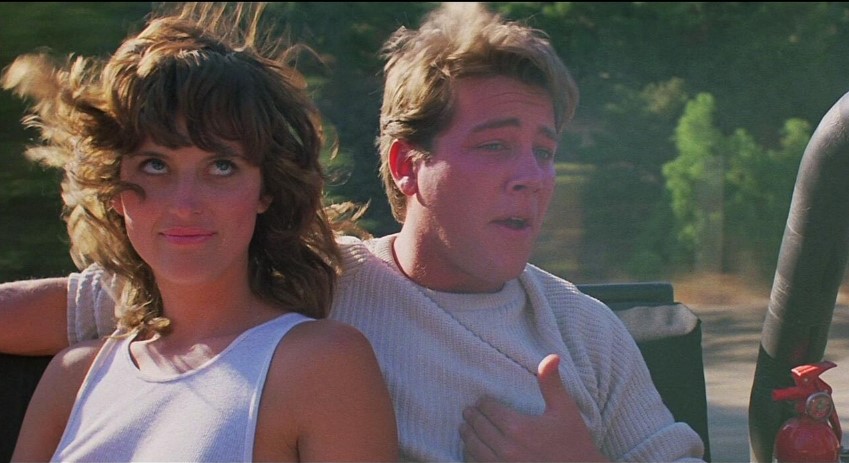 It’d be a crime to compare The Zero Boys to other modern releases but for what it is and where this movie came from its looks fantastic. Arrow Video restored this film with a 4K scan of a 35mm interpositive element, it truly is as good as this film will ever look. Instances of scratches do appear from time to time but overall the painstaking restoration process that Arrow Video has gotten us used to does not disappoint. My question is, do we really need to scan these films in 4K? I feel that overall the picture quality is hurt here by the resolution. While the color and image is crisp and detailed, the grain is quite frankly distracting in some scenes and lacks any sort of consistency from shot to shot. It’s a minor gripe and I personally enjoy a grainier picture but others might be put off by this. 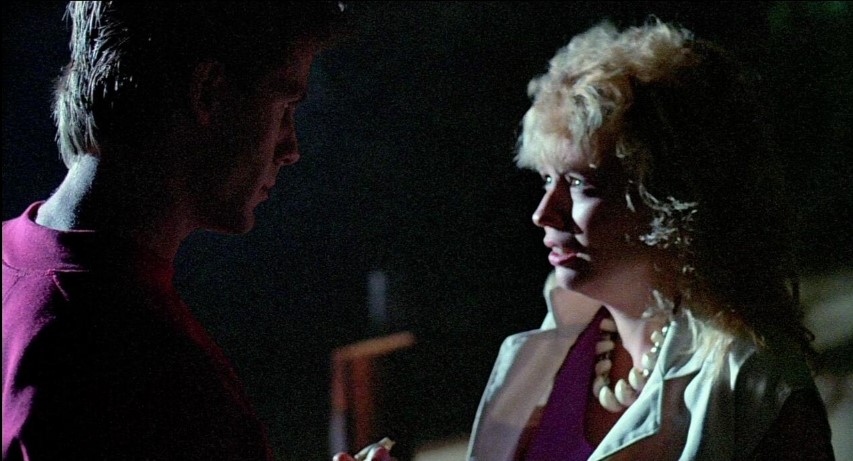 My favorite element of the film was some of the cinematography involved. The camera is constantly moving in interesting ways that keep the on screen storytelling more interesting than it could be with more boring use of a camera. There is some genuinely striking images presented on screen combined with some generally creepy lighting and use of fog making The Zero Boys a real treat to look at. 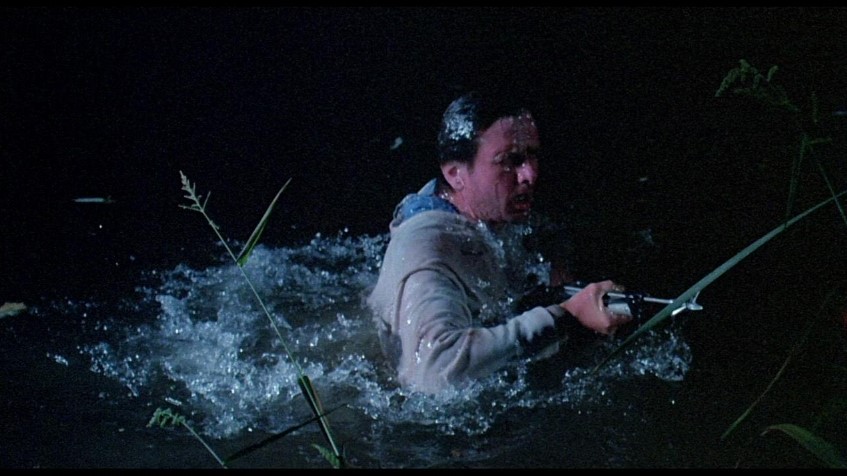 My other favorite part of The Zero Boys was the sound. The cheesy horror movie sounds and effects sound great with the original uncompressed stereo 2.0 audio Arrow Video presents us with. The biggest treat here though is the score. I failed to mention that Frank Darabont served as an assistant to the art director on the film but he’s not the only one who went on to do great things. The Zero Boys is backed by a wonderful score from the one and only Hans Zimmer. The man responsible for the scores of The Dark Knight, Interstellar and so much more does his best Friday the 13th impression here combining it with tinges of Psycho and the exciting triumphant music he’s now become known for to create one of my favorite B-movie soundtracks ever. I’ll be making the music used during a certain driving montage a ring tone for sure. 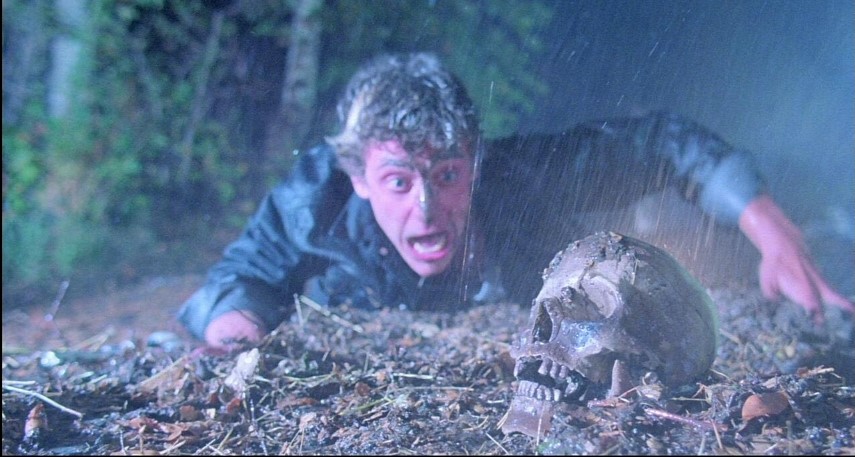 What makes a release from Arrow Video truly a release from Arrow Video is the features and package we are presented with. As usual we get their custom blu-ray case with reversible art on the sleeve and a booklet with an essay on the film by film historian, James Oliver. We get a brand new interview with star Kelli Maroney entitled “Zero Girl” complimented with another new interview with her female co-star Nicole Rio, “Blame it on Rio”. These provide some enjoyable insights into the film that will make you appreciate the film itself more. 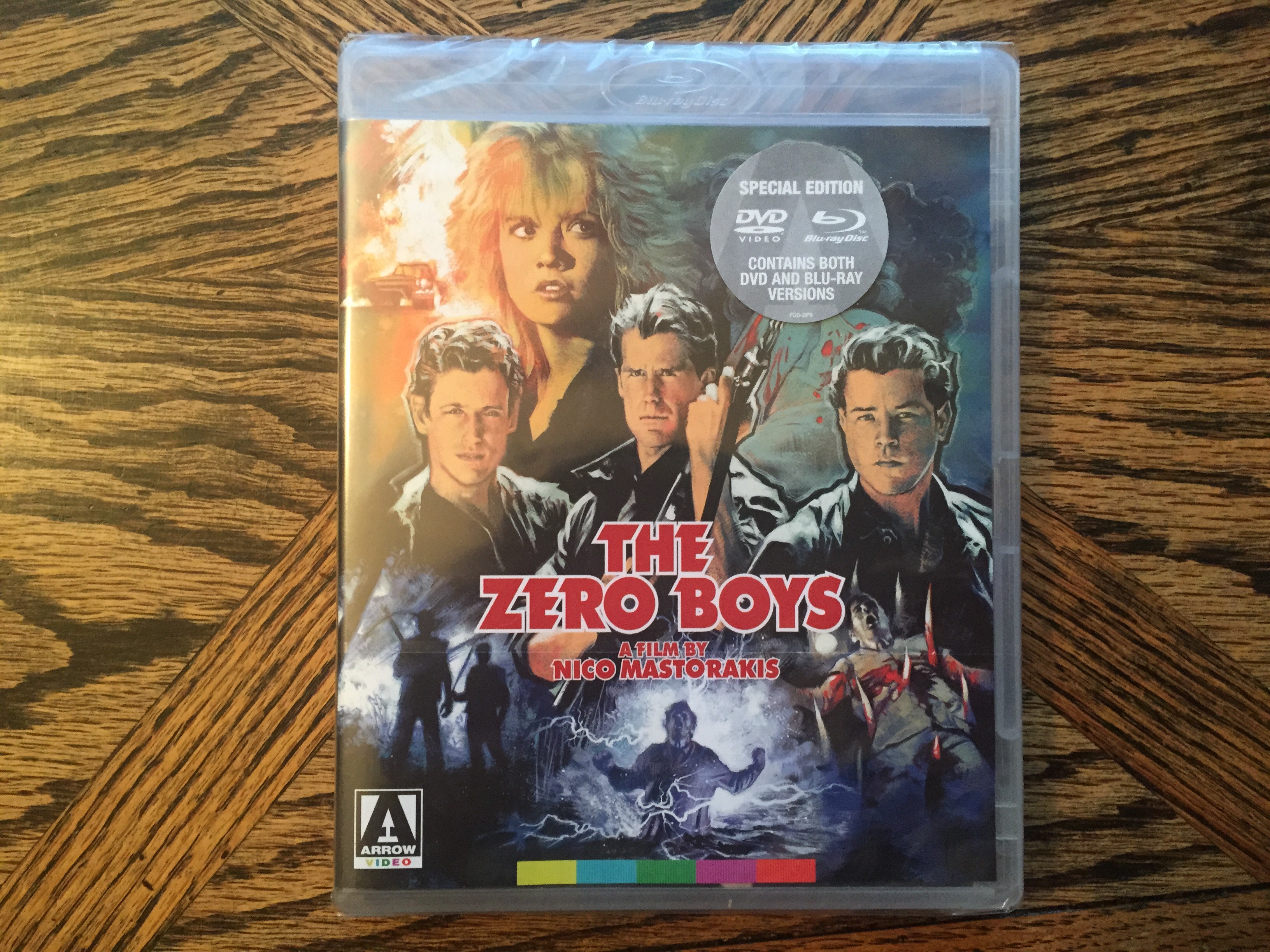 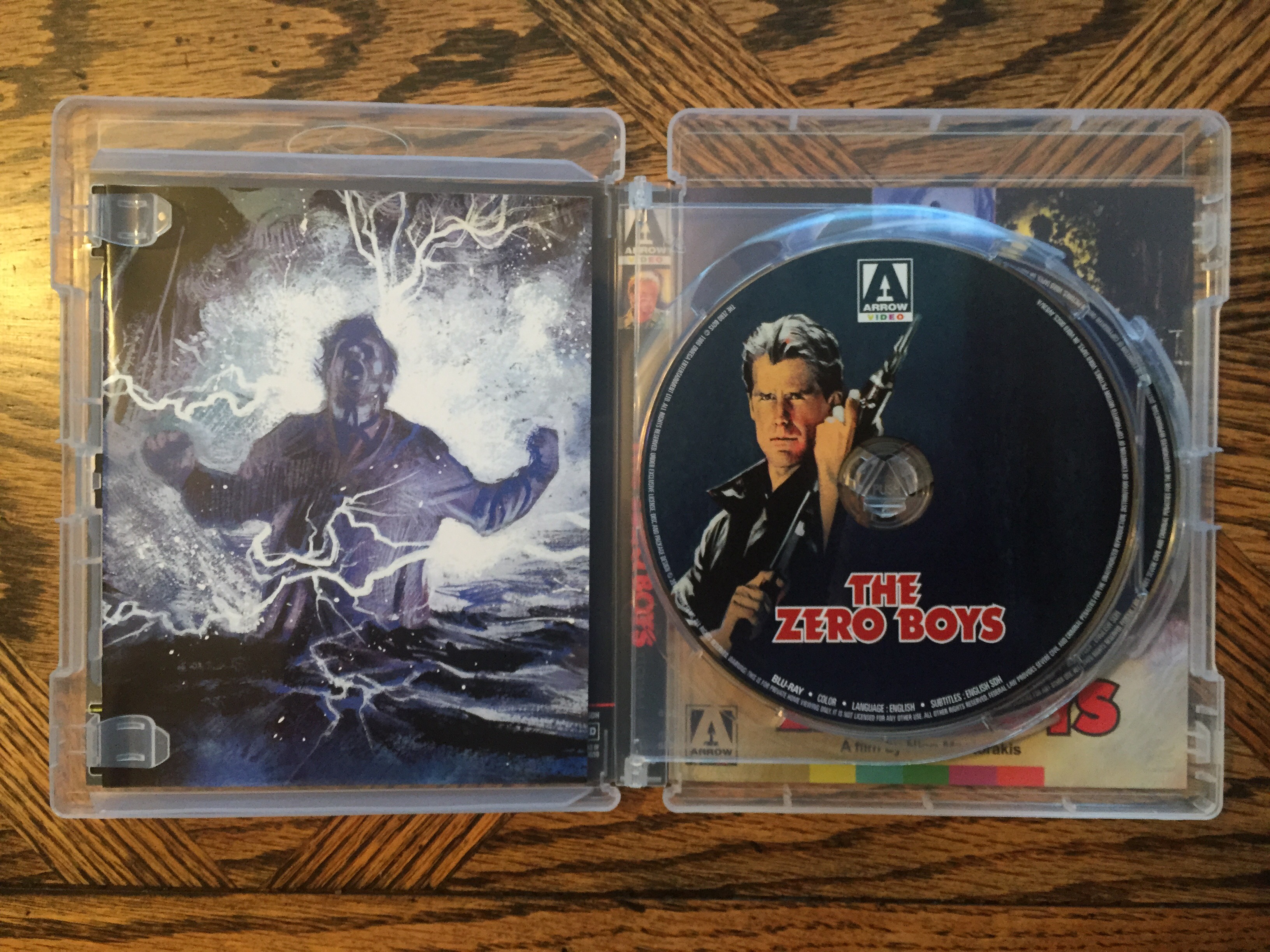 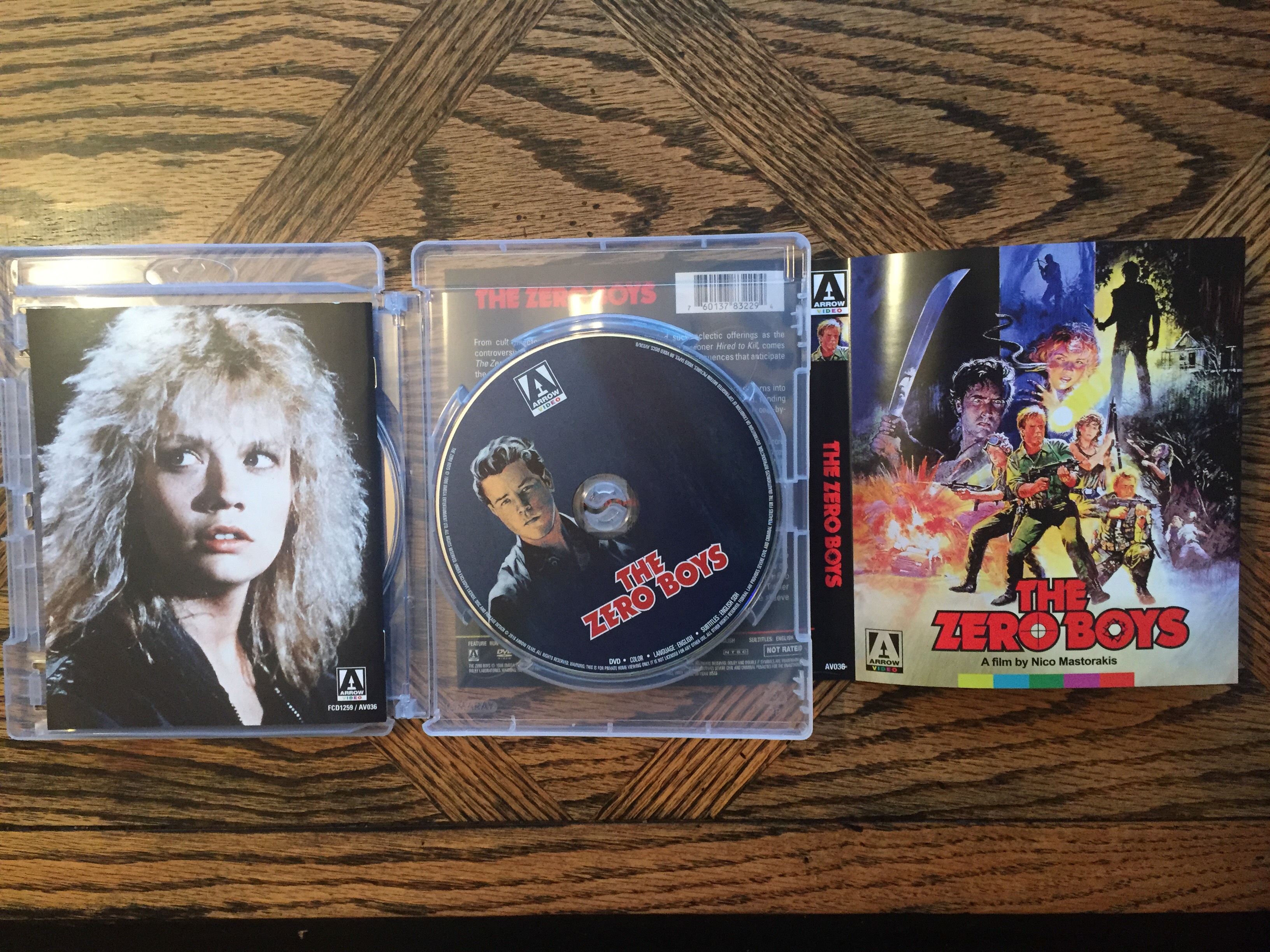 The best thing included here is the interview with director Nico Mastorakis where he sits down with Nico Mastorakis in the unexpectedly funny & charming self interview, “Nico Mastorakis on… Nico Mastorakis”. He gives us some information on his career, what he’s doing now and lots of fun stories and facts about The Zero Boys. Like how they actually use the same house used in one of the Friday the 13th films. Understanding the personality of this zany director definitely made me enjoy the movie a lot more and I’m looking forward to going back now and checking out the release of “Island of Death” and the upcoming “Hired to Kill”, available on May 17th. Also included are an audio commentary of the film with Kelli Maroney, the theatrical trailer, and a stills gallery. Overall its a lighter package than we’re used to from Arrow but for this kind of film it is totally acceptable. 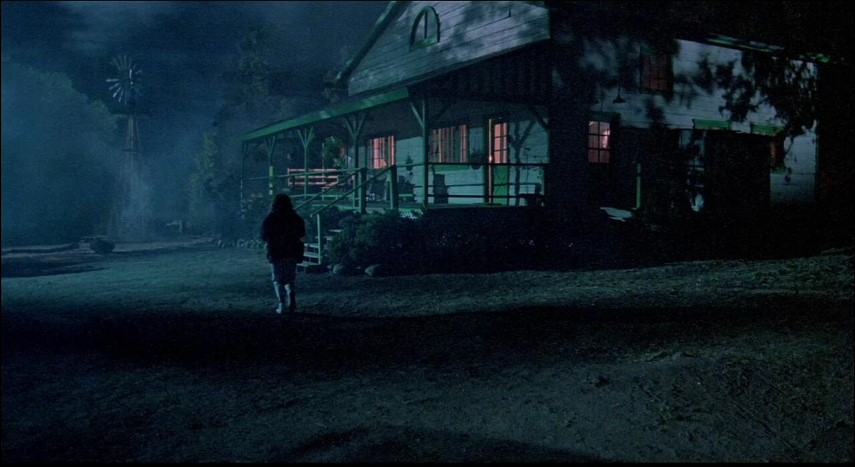 If you’ve read this far into the review you probably already know if The Zero Boys is for you or not, it’s a hard film to recommend to anyone that isn’t a collector of this type of cinema or a fan of previous releases like this in Arrow’s catalog. After some reflecting on it I really did like The Zero Boys though and it’s definitely a film worthy of the Arrow Video treatment. It’s well made and has enough going for it to make it worth a watch. Though some poor acting, a slow pace, lack of gore and an abrupt ending definitely brings The Zero Boy down a few pegs from what it could be with all it’s moving pieces it puts into play. I guess what truly makes The Zero Boys disappointing is that it really could have been so much more, only you can truly decide if what we did get is something for you or not. To me it was a worthy introduction to the films of and the character that is director Nico Mastorakis, I’m more eager to check out more of his work than anything else after my time with The Zero Boys. 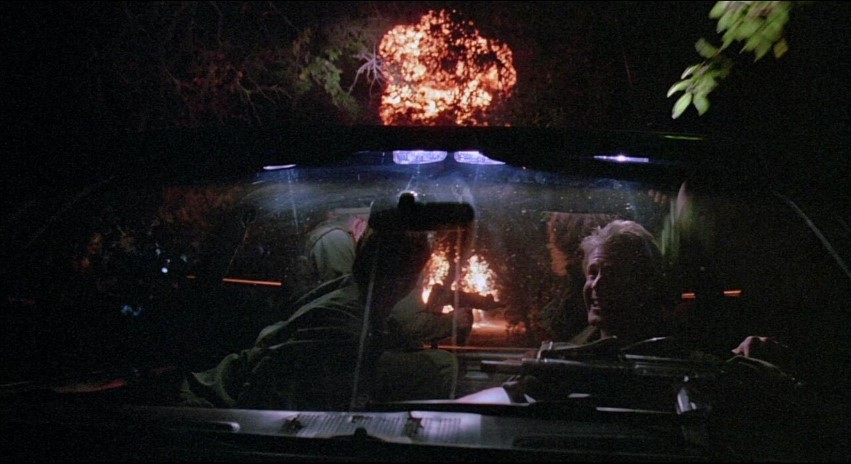 Please note: This film was sent to us for review, that has in no way affected my review process or opinion on the film or product presented.