It’s hard for Hollywood directors to inhibit another culture than their own comfortably. Almost every time they do, it feels contrived and awkward, especially when trying to break free from stereotypes to make an interesting movie. The Yakuza, a 1974 Warner Bros. production directed by legendary Hollywood director Sydney Pollack, is this kind of movie, but that doesn’t necessarily stop it from being an effective feature, just an awkward one. 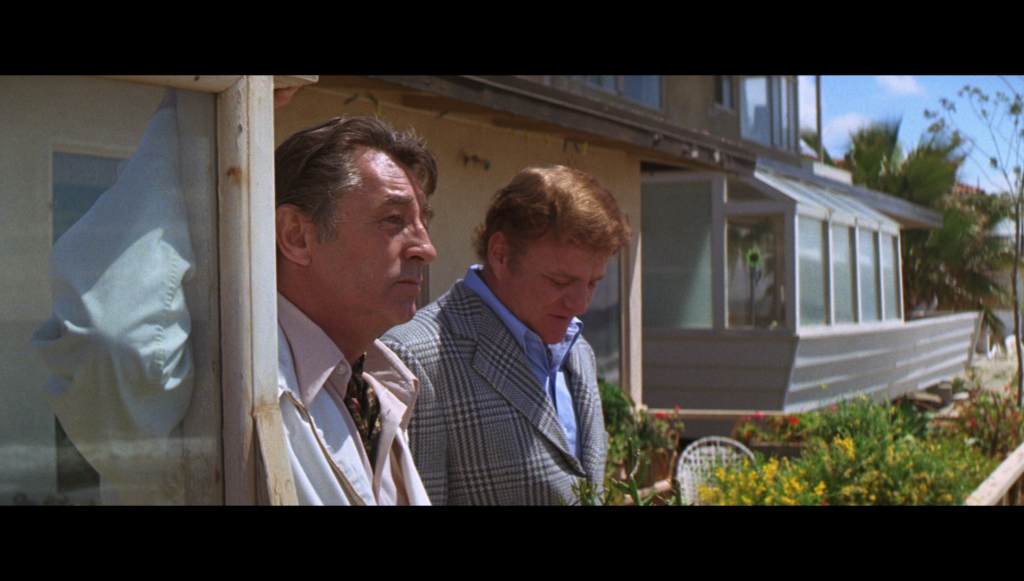 Set primarily in Japan during the early 1970s, The Yakuza is a hybrid neo-noir, samurai action film centered around private eye Harry Kilmer’s return to Japan to settle some business for a friend of his with the legendary gangsters of Japan, the Yakuza. A former member of the American military presence that occupied Japan after World War 2, he must do his best to rekindle the various connections to the underworld of Japan that he once had, leading him to the former love of his life, Eiko. He is forced to both face the life that he left behind, and use what’s left of it to find the Yakuza gangster Tono, who has kidnapped his friend’s daughter. His quest to find and dismantle the Tono family will force him to take up arms with Ken, Eiko’s brother, whose intense hatred of US soldiers forced Harry out the country in the first place, leading them down a path of intense destruction as they defend themselves from the gangsters they have angered. 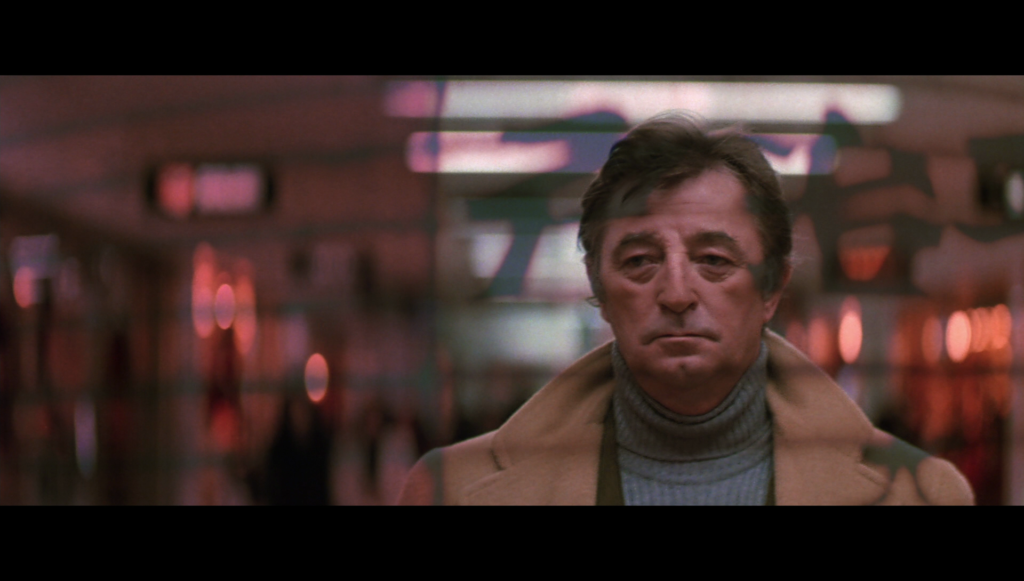 The Yakuza is at times a powerful neo-noir styled film, filed with beautiful high contrast lighting, phenomenal nighttime exposures, and an air of nostalgia and romance that allows us to comfortably inhabit the misery and shame that Harry felt in leaving Japan nearly twenty years prior to the movie. Coupled with the film’s phenomenal jazz score, composed by Dave Grusin,  it makes a powerful case for just how effective the tools that made film noir such an interesting genre can be under a more modern lens. Unfortunately, not content with making the film a pure noir type movie, screenwriters Paul and Leonard Schrader decided this also had to be a brutal action film, inserting a gangster story line filled to the brim with Sam Peckinpah inspired, heavily stylized violence. It clashes immensely, and while both of the styles of filmmaking here would stand well on their own, it makes for a weird mix. It’s like a pizza that’s half pepperoni, half applesauce. It just doesn’t feel quite right. 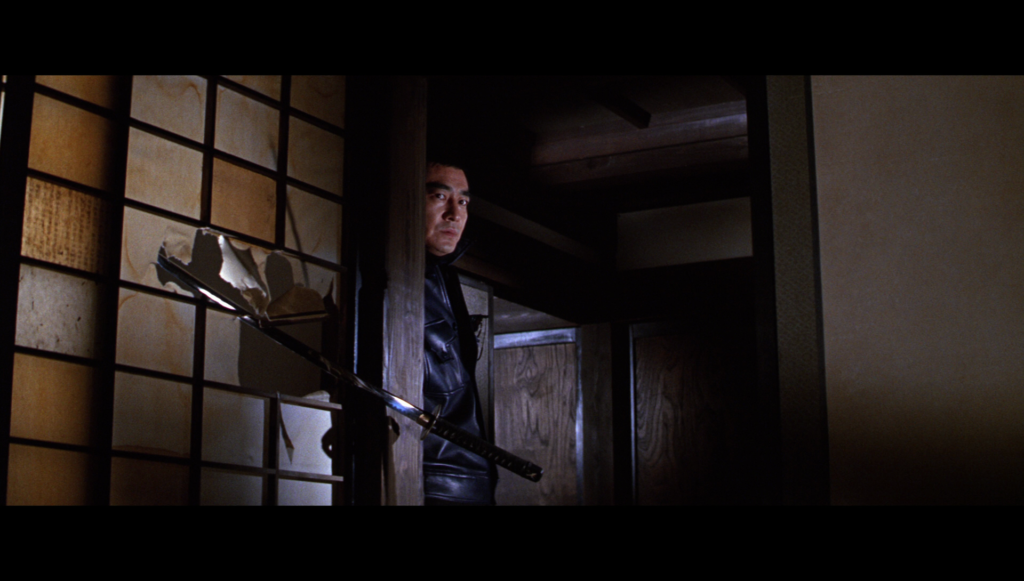 On top of the weird criss-crossing genre issues, sometimes the film trips over itself as it tries a little too hard to remind us that the Yakuza are a strange extension of the Samurai class of warriors of Japan’s past. As the blood begins to shed, we’re introduced to a bunch of antiquated Samurai-esque philosophies such as giri, essentially a convoluted life debt, and yubitsume, an act of apology in which you cut off your own finger as a symbol. Like many Hollywood films, it doesn’t really give these concepts a ton of weight, or any real historical context, but uses it as a means to drive that narrative forward, trivializing the Japanese culture that the film is meant to be glorifying just a tad bit. It also doesn’t do a very good job of establishing cultural norms and customs of the Japanese, resorting to uncomfortable plot twists that later get their own plot twists. Its messy, and somewhat distracting. 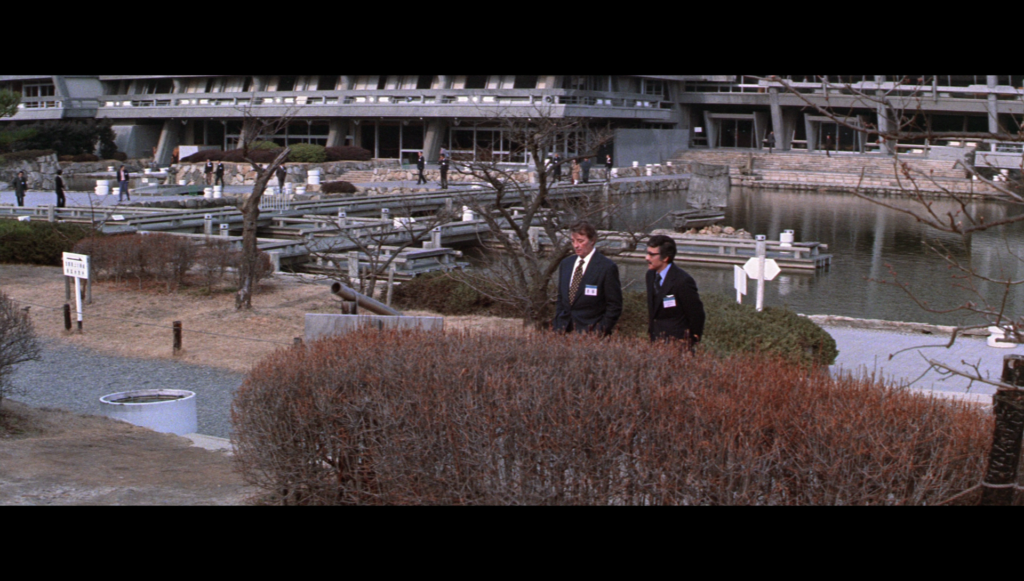 Does this mean that The Yakuza isn’t worth your time? Absolutely not. Pollack and his creative team in a stroke of genius chose Hollywood legend Robert Mitchum to play retired detective Harry Kilmer. Bringing out both his film noir chops and his ability to leading a convincing action sequence, he gives a nuanced performance that cements the film into place. Speaking Japanese like the best of American bred actors, he radiates an aura of the pain and frustration his character has felt during the last twenty years, channeling it into a measured, but brutal level of chaos as he takes on the Yakuza. His partner in all of this, Ken Tanaka, played by legendary Japanese actor Ken Takakura, is his perfect foil, embodying the more quiet, reserved nature of the Japanese people, channeling his rage into a less chaotic, but no less measured thirst for blood as Mitchum. The action scenes these two participate in are second to none in terms of combining the traditional sword fighting of Japanese samurai films with the blood and gore of the ultra violent early 70s. Pollack shines in both sections of the film, handling the delicate nature of Kilmer’s broken past, and the frantic mayhem of war with the Yakuza with great finesse. I just wish he had been able to better integrate them into a more cohesive story. 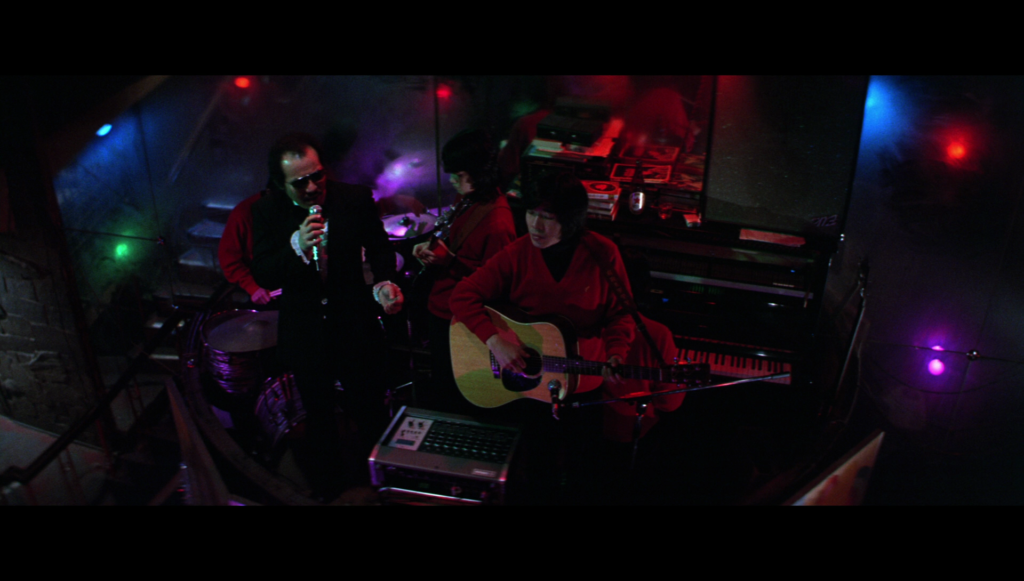 Although unable to ignore its Dr. Jeckell and Mr. Hyde two faced narrative issues, I had a blast riding through The Yakuza. Its an interesting artifact of the 70s, and it feels like it could have easily been split into two, perhaps less interesting, but more complete and interesting films. What we have here is a ton of fun, but I wish both ends of the spectrum got a little more time to flex their legs and develop in a more fulfilling way.

The Yakuza was shot on 4-perf 35mm film with Panavision anamorphic lenses, resulting in a projected image of 2.35:1 when shown in theaters in the 1970s. Sourced from a brand new HD master prepared by Warner Archives, The Yakuza is presented in 1080p resolution, maintaining the original 2.35:1 aspect ratio. 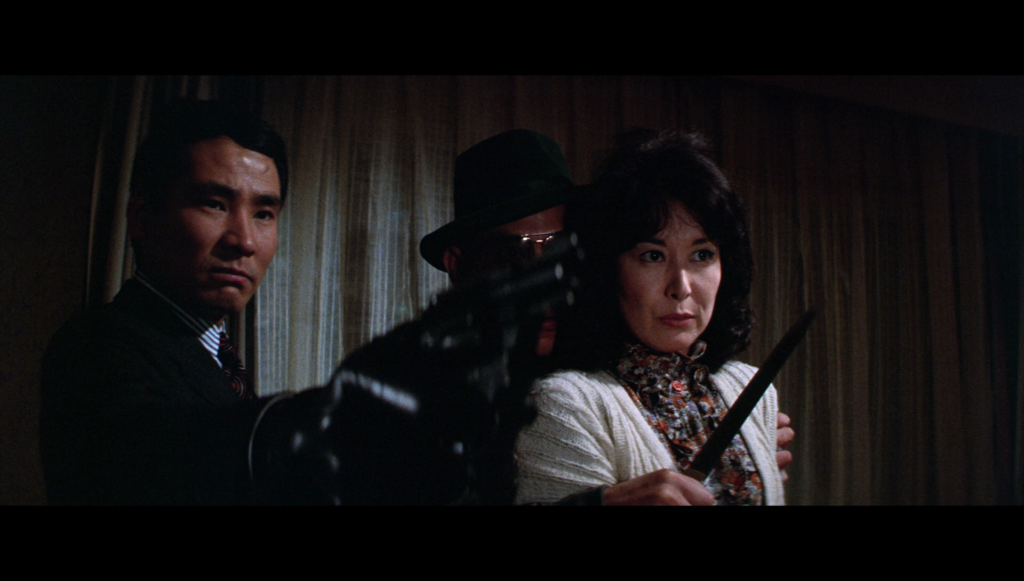 Between the start of 2017 and now, I’ve seen a ton of great restoration and remastering work from the guys at Warner Archive. Of all of those however, The Yakuza takes the cake as the best looking one yet. This brand new master, much like a few key moments in the film, comes out gun blazing with inky black levels, excellent detail in close ups and in mid shots, and a lovely film layer of grain. It strikes the perfect balance between all three, and outside of one flash that I caught that could have been a result of a negative splice and some waning softness, The Yakuza looks flawless. As the camera paces through the bloody halls of Yakuza meeting places, Warner Archive has ensured that we’re there to catch every detail in a phenomenal 1080p presentation.

Original shown in theaters with a mono optical soundtrack on film prints, The Yakuza is presented on home video with a DTS-Master Audio 2.0 mono soundtrack. 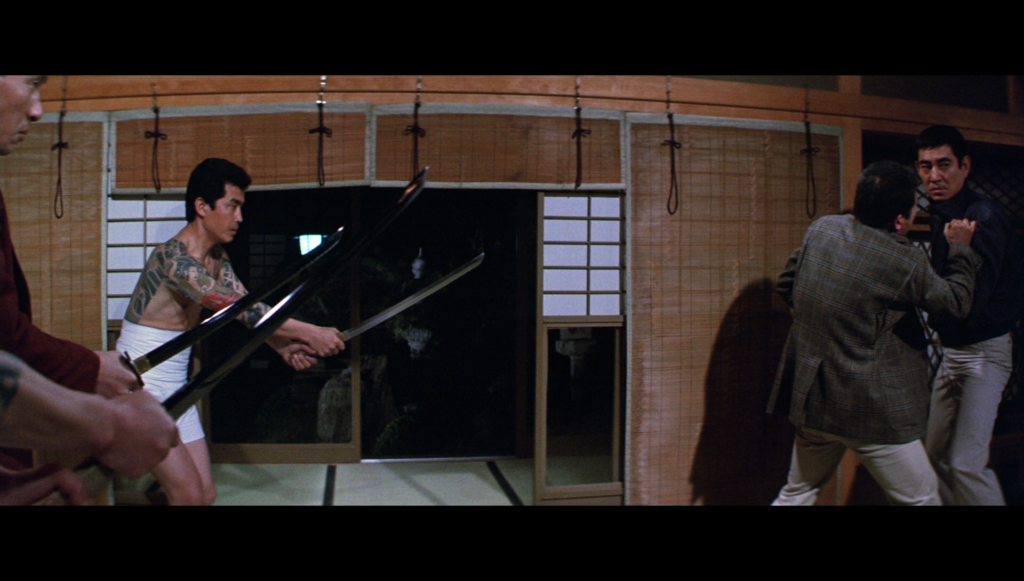 Almost all mono and early stereo tracks from Warner Archive sound the same, in that they have a fairly leveled range in dynamics, little to no pops or hisses, and excellent layering that balances the score, sound effects, and dialogue. The Yakuza is no different, except with the added punch of Harry Kilmer blowing through the walls of a dojo-esque house with a double barreled shotgun. This mono track is perfectly serviceable, with a noticeable amount of punch to it during the larger action sequences.

Released to home video by the folks at Warner Archive, they have elected to package The Yakuza in a standard Blu-ray keepcase. The front artwork features an amusing poster design featuring a samurai sword with the faces of the main Japanese characters behind the barrel of Harry’s shotgun against a background of wooden shutters. Robert Mitchum is amusingly just sorta shoved beneath the title in a small box. The back features a few shots from the film, a review quote, and a paragraph about the film against a hazy window pane. Below this is a list of features, with our two leads on either side dressed in black and drinking together, credits, and a list of technical specifications for the release. A goofy, if not well made package from the folks at the Archive. 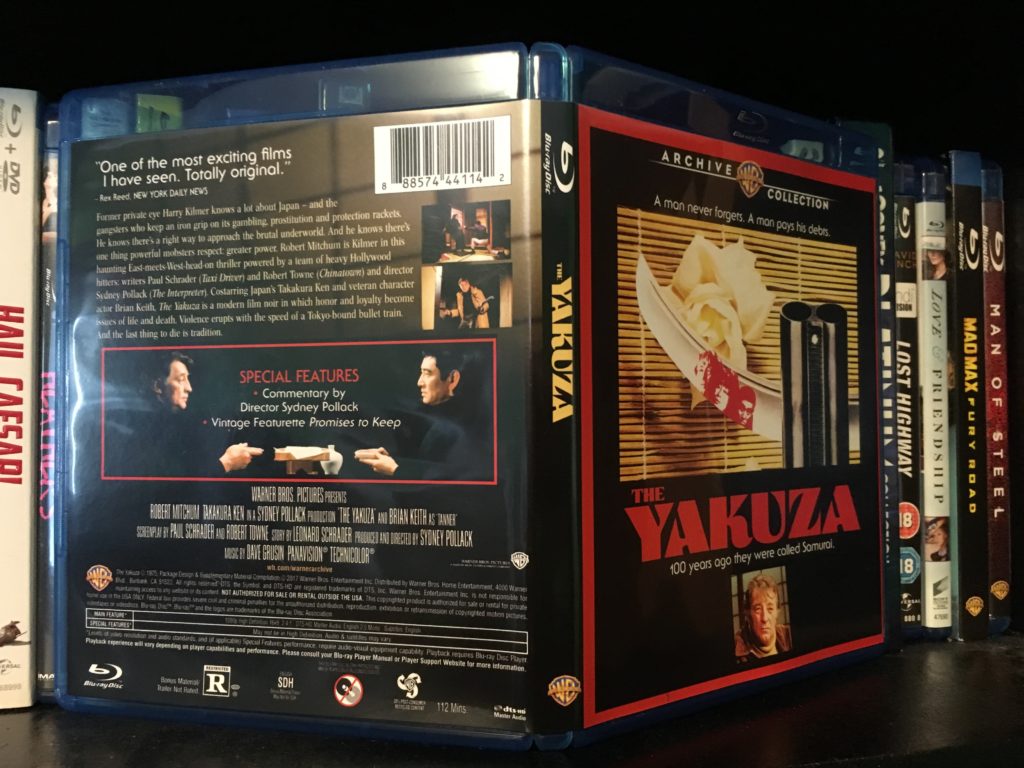 Feature Length Commentary – audio commentary performed by the film’s producer and director Sydney Pollack. He goes into why he chose to make the film, and gives some of the context the film really needed to make it feel more complete, as well as shares anecdotes from the film’s production.

Vintage Featurette: Promises to Keep – a 20 minute documentary about shooting the Japanese portion of The Yakuza on location in Japan. It focuses on the cultural differences, teaching English to Japanese actors, and other various oddities the production faced when shooting in Japan. Scanned off of a pretty rough print, but it looks authentic and is a pretty solid behind the scenes featurette.

Theatrical Trailer – the film’s trailer as seen in theaters before its release in the 1970s. 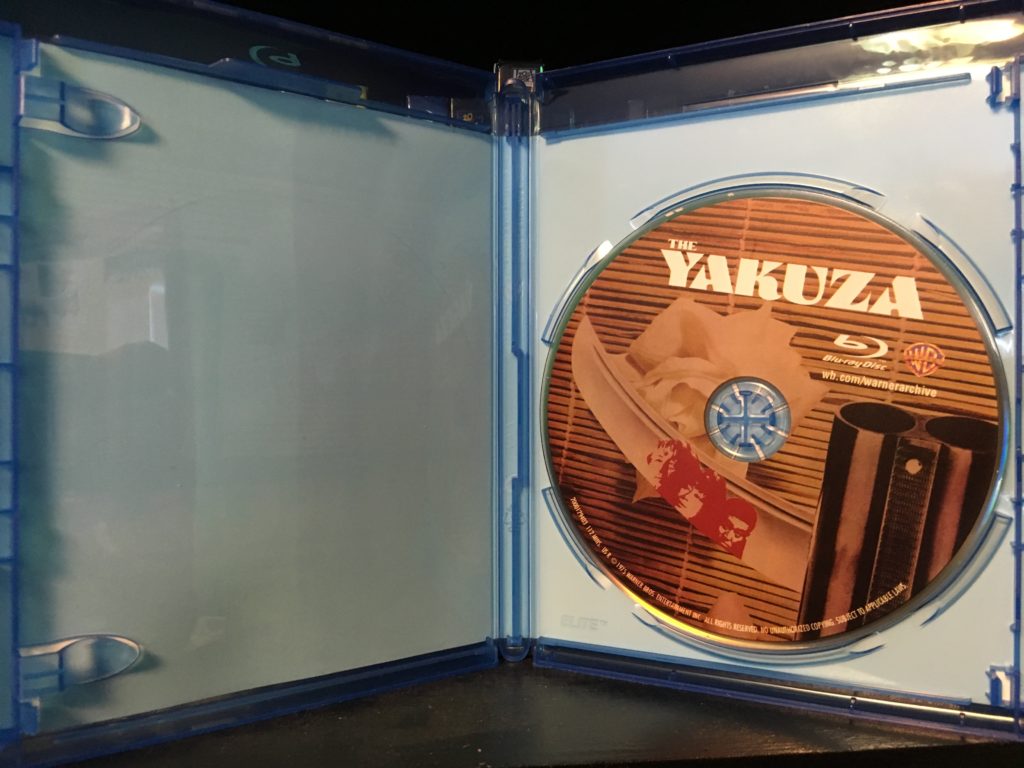 Although there isn’t much here, the inclusion of a fascinating documentary, and a great commentary track do an excellent job of elaborating on the intriguing aspects of making this film. 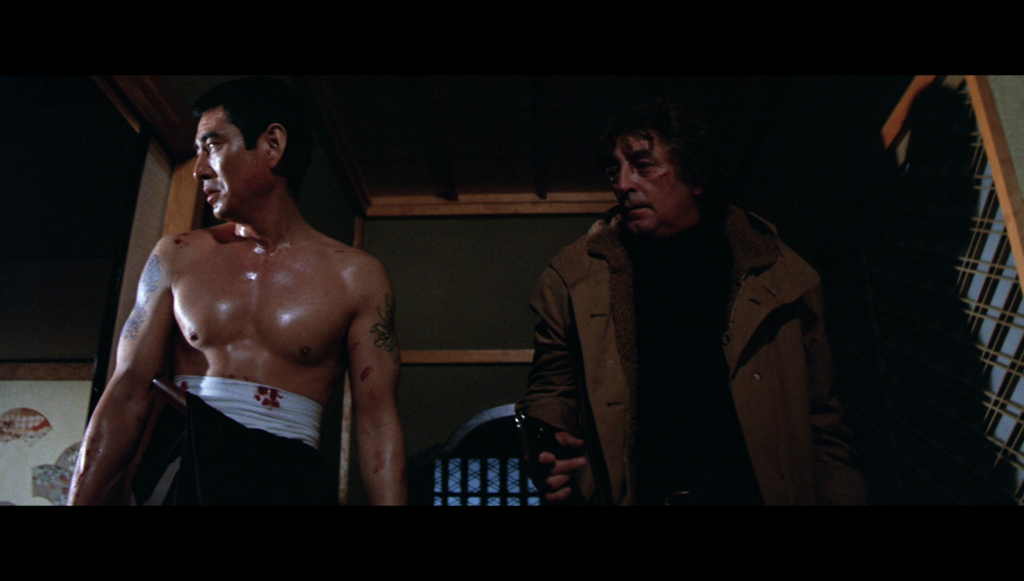 The Yakuza is an often half baked, but effective and exciting Hollywood action film set almost entirely in Japan. Script issues aside, the film is carried by a wonderful old man Mitchum performance, a great score, and wonderful noir-like cinematography. The action is no slouch either. Combining all of this it’s easy to sit back, turn your brain off, and enjoy the mayhem. Released to Blu-ray by the team at Warner Archives, it hits home video with a stunning 1080p presentation, great mono audio, a couple of decent features, and great packaging. As is usually the case with Warner Archive releases, The Yakuza is recommended.