The Wrong Man, one of the lesser known Alfred Hitchcock features, comes to Blu-ray courtesy of Warner Archive and delivers an excellent home media presentation, especially for a movie celebrating the 60th anniversary of it’s release this year.

The Wrong Man was released in 1956, right in the heyday of Hitchcock’s “masterpieces”. With films like Rear Window and Dial M for Murder preceding it, and Vertigo, Psycho, and The Birds following (all found here in a nice Blu-ray box set), The Wrong Man is a film that could be easily forgotten within Hitchcock’s extensive catalogue. However, I urge you to re-visit this film, as it centers around one of entertainment’s hottest themes right now; American trial law and false accusations. Think Making A Murderer or the Serial podcast, but in a classic 1950s black and white film. Sixty years ahead of it’s time, The Wrong Man is suddenly as relevant as ever. 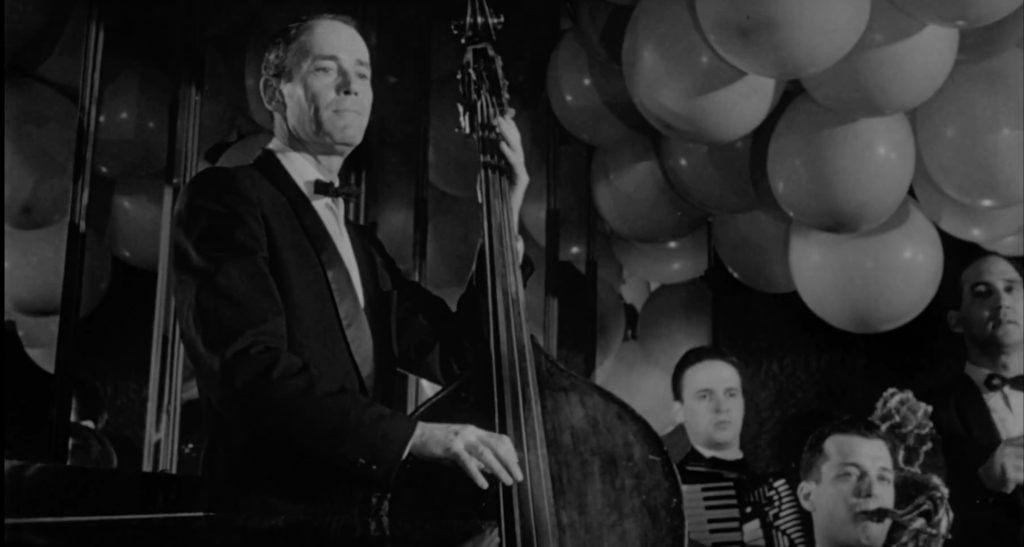 The film follows the real-life trial of musician Manny Balestrero (played wonderfully by Henry Fonda), who is falsely accused of a string of robberies based only on his appearance and resemblance to the criminal. As Manny nervously incriminates himself to police and loses his only alibis to untimely death, it begins to look as if he will spend a lot of time in prison for crimes he never committed. Like many of the “true-crime” stories being told in the entertainment world these days, The Wrong Man is wrenching and leaves you feeling hopeless as an innocent man faces penalties that will ruin his life. 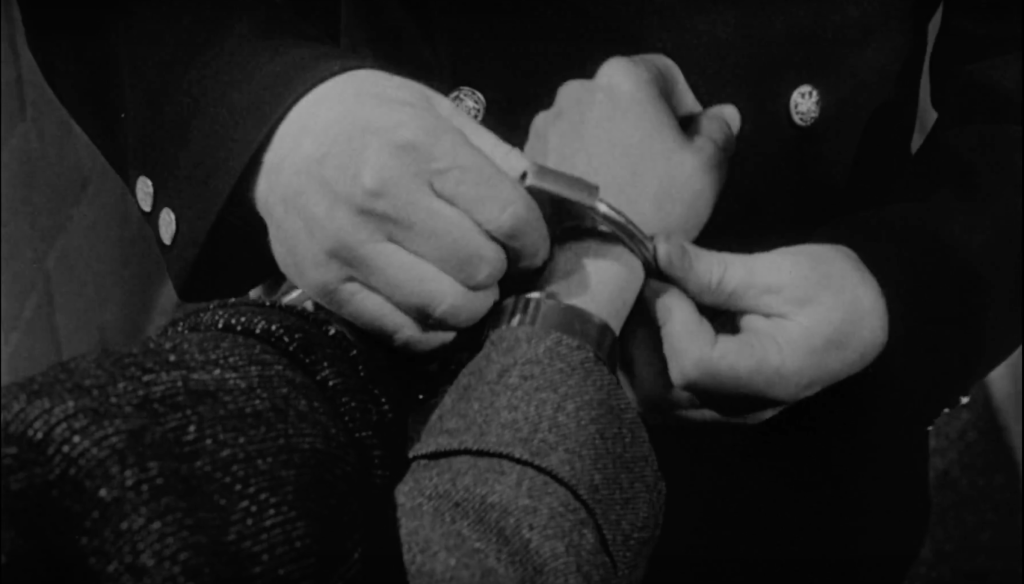 It definitely has a Hitchcock feel to it, with the twists and turns coming at every corner, but they are in fact following a true story and so this is not of his doing. Other than that, you really would not know this was a Hitchcock product, which probably hurt its chances for success back in the day. The film is shot in a sort of documentary style, much differently than Hitchcock’s typical style, but it does so very effectively. There is no Hitchcock cameo, as he cut it before the film’s release, and the “feel” that his films have just isn’t there. It is a bit hard to explain. 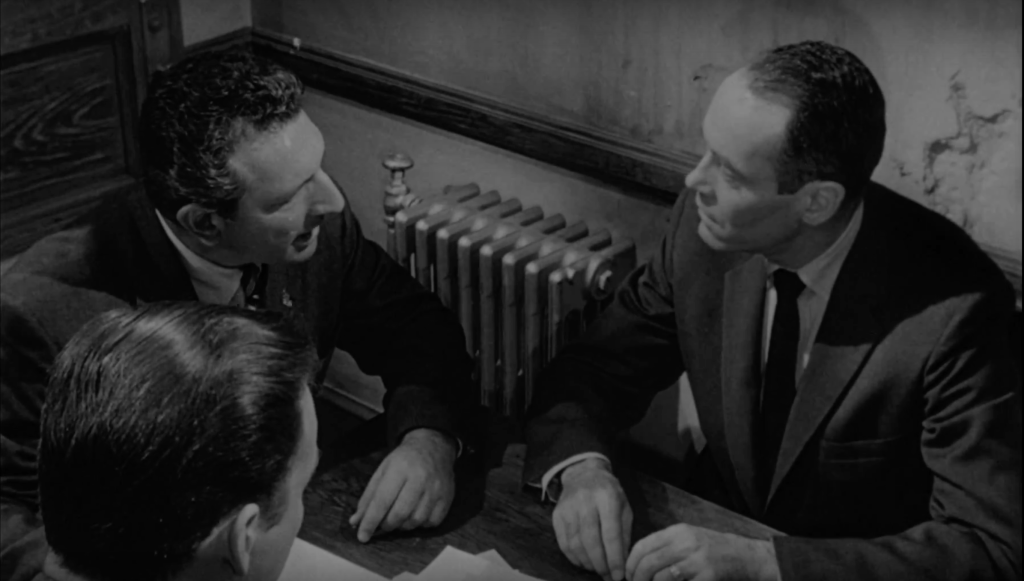 It is certainly a good film and one worth watching if you are a fan of this genre and want some old school black and white to counter all of the new true-crime media, but it does not come anywhere near the level of Psycho, Vertigo, or Rear Window.

The Wrong Man was transferred to Blu-ray by the masters of restoration at Warner Archive from a 2K master source, and I was pleased to see that they did not scrub the grain and try to digitally smooth out the image. The grain is heavy, and being in black and white, it shows more than the typical color film, but this is part of the experience when watching older movies. I would much rather watch something as it was originally shot and intended to be presented by the director and cinematographer than an unrealistically smooth presentation based on digital noise reduction (DNR) techniques. As reference for those who are not familiar with DNR, Disney infamously used this technology heavily on their Blu-ray transfers of The Sword in the Stone and Robin Hood, and those films have never looked worse. Thankfully Warner Archive did not fall into this trap, and the heavy film grain on The Wrong Man gives it a nice classic look and dates the film appropriately. Hitchcock would be proud. 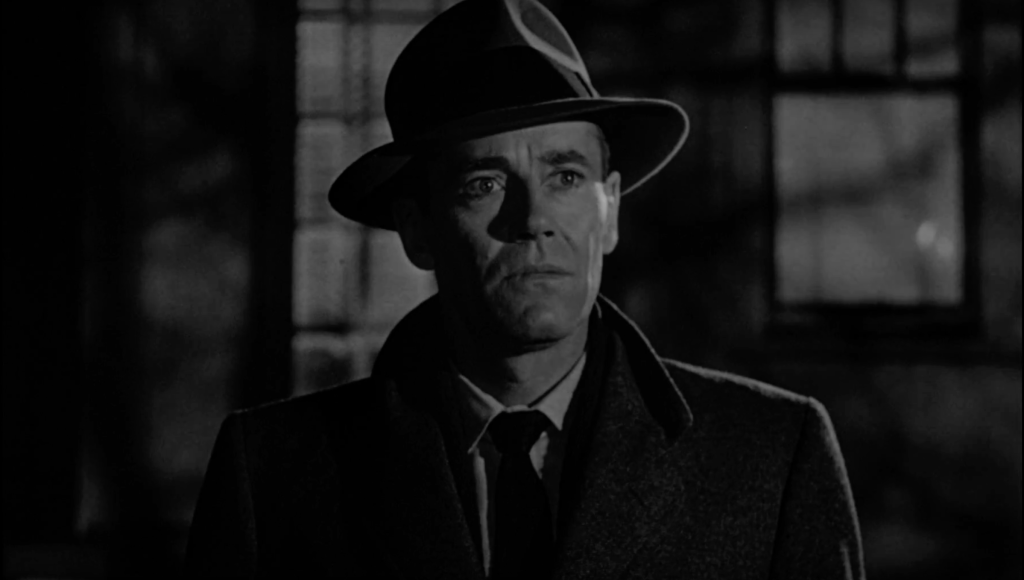 Since this is a black and white film, black levels and gray uniformity are the most important aspects outside of the grain, and they do present nicely on my 2015 model 55″ Sony TV. This is a fairly dark film, with lots of scenes taking place indoors, and I will say that it could probably benefit from an OLED TV that has deeper black levels and would help distinguish the gray scale better, but it is a very nice presentation and those of us without the new technology should not be wary of this release for that reason. Everything is made out very easily on screen and there are no issues with grays running into each other and muddying the picture. The transfer was done well enough to avoid this problem, and it will look great on any decent TV. As mentioned, OLED would probably deliver the best presentation possible in terms of black levels, although this could be said for just about any black and white (or color) home media presentation, so do not avoid this film just because your TV is a few years old.

The audio on this release is an identical DTS-HD Master Audio 2.0 track, upconverted from the original mono track. This simply means that your left and right front speakers will play identical audio, but they are both utilized to give the original mono track some extra power. The audio is definitely not to be used as a reference track for showing off your system as it is fairly dialogue driven, but the 2.0 track is mixed well from the original audio elements.There are no real negatives, but also no overwhelming positives either. It is an average audio presentation, typical for a movie from this time period, and thus it receives an average score.

There are a very limited amount of features on this release, which is a bit disappointing but not surprising for a lesser known movie, even from a great like Alfred Hitchcock.

There is nothing wrong with the packaging for The Wrong Man, but also nothing special. Again, it is simply average and adequate, packaged as a typical one disc Blu-ray would be. It comes in a blue Amaray case (not an eco-case) and features the original theatrical artwork on the front cover for a classic look. 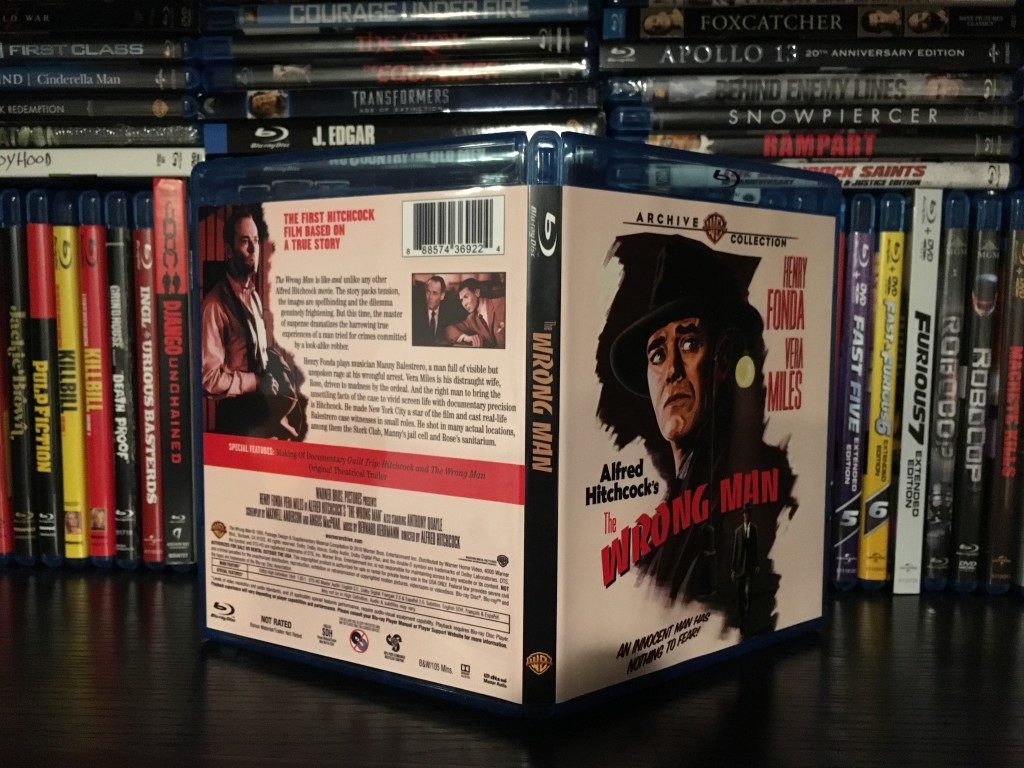 Hitchcock fans need to pick this one up as an integral part of any collection, and The Wrong Man should really appeal to any collector based on it’s very current subject matter and it’s excellent black and white presentation. It is always good to have some nice older films to showcase in your home theater, if you do not have any films like this yet, black and white is a treat to watch in HD. I would recommend this release if the subject matter is of interest to you or if you are looking for a great black and white film to add to your collection. The Wrong Man can be picked up from the Warner Archive store or on Amazon. 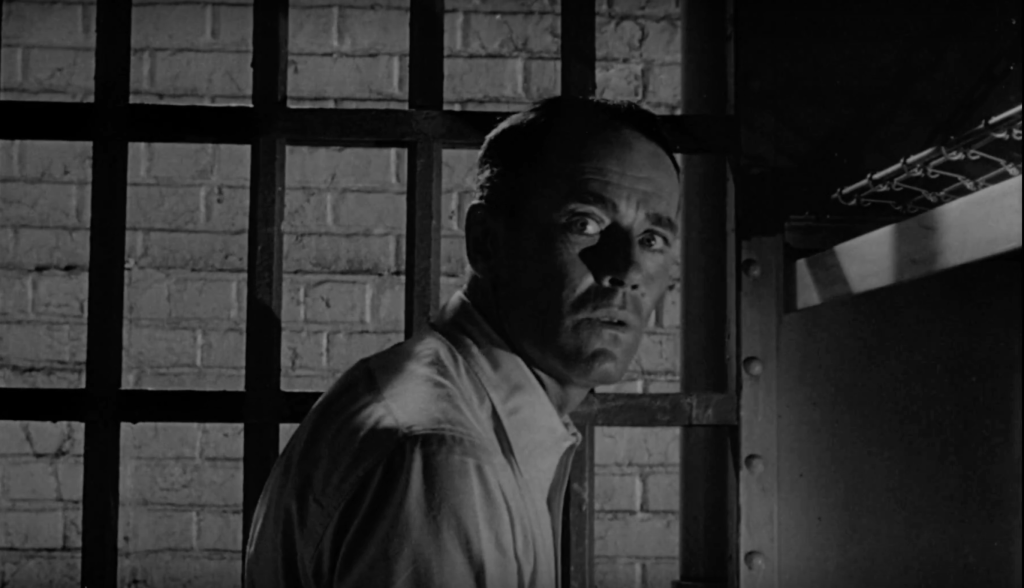