READ HERE FIRST: I’m going to break character to lay this down: I do not possess a way to collect direct screen captures from my Laserdiscs. As a result, these screen captures are all point and shoot shots from my Sony PVM CRT using my iPhone SE. Yes, they look horrible. I know. It does not reflect the actual quality of the film in motion, which actually looks very watchable for nearly 20 year old analog video. I apologize in advance for anyone who feels I have misrepresented the laserdisc format as a result of this.

I love West Side Story. Second to My Fair Lady, it is probably the finest stage show adaptation the Hollywood studio system of old churned out before it bit the dust in the 1960s. Co-directed by legendary Hollywood chameleon Robert Wise and the Broadway show’s original director Jerome Robbins, the film is a brilliant retelling of the tragedy of Romeo and Juliet, augmented by elaborately choreographed musical numbers, more relevant than ever race tensions, and the power of the Super Panavision 70 camera system. It reached maximum relevancy decades ago, and has stayed there ever since; it sees frequent revivals, has hit home video almost as many times as Terminator 2, and is often used in middle and high school music classrooms as fodder for examination all across the country. It’s practically a cornerstone of 60s Americana – so the question is, does it hold up in 1999 as well as it did in 1961? Let’s find out. 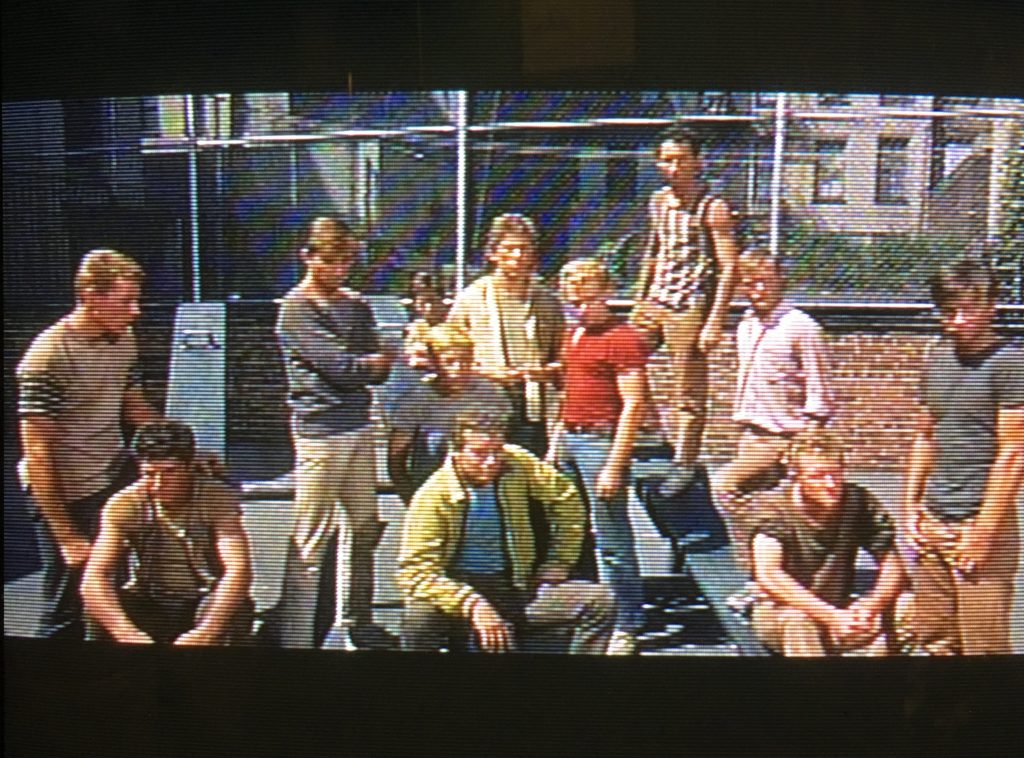 West Side Story, a retelling of the classic Shakespeare play Romeo and Juliet, is the story of two lovers, Tony and Maria, who are caught on the opposite sides of an ongoing feud between two New York City gangs; a gang of caucasian delinquents, The Jets, and a gang of Puerto Rican street dwellers, The Sharks. After meeting each other by chance at a neighborhood dance, they find themselves prey to love at first sight, while Riff, Tony’s best friend and leader of the Jets, and Bernardo, Maria’s older brother, make plans to wage war across the neighborhood to determine who owns the block once and for all. Together, the two of them try their best to not only find each other, but find a way to put an end to all the vicious fighting before the neighborhood is consumed by the petty squabbles of these two gangs. 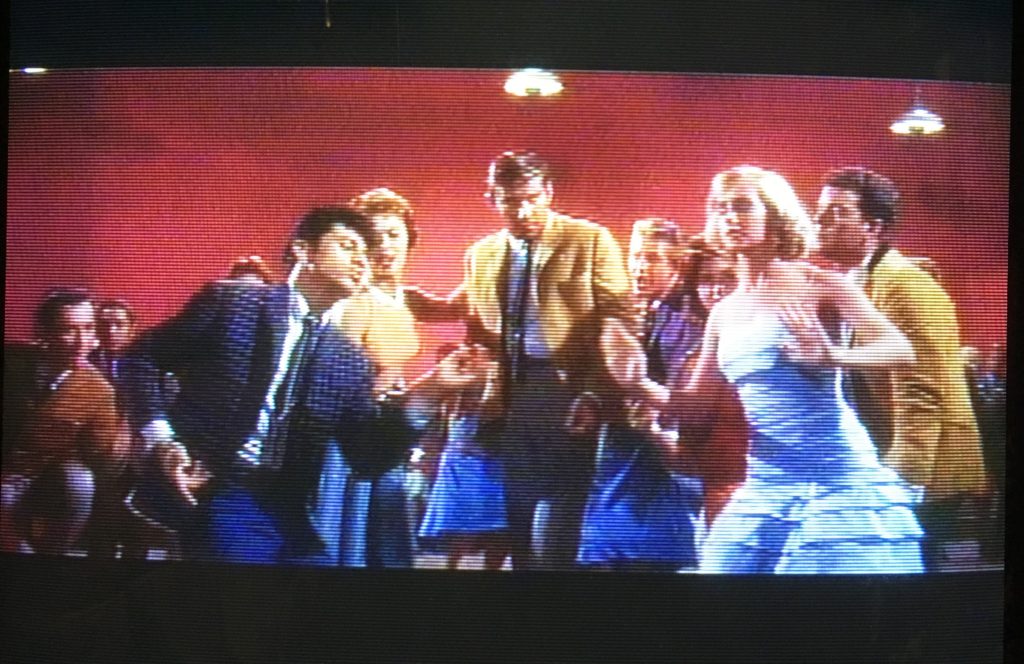 It’s hard to know where to start with West Side Story. It’s a movie that tells a story so small and intimate at times, but also a movie that’s made in such a big and grandiose way that its hard to really nail it down and analyze it. For every simple plot beat established, or cliche that’s readily apparent, there’s an amazingly smooth musical number, or a new set that’s full of rich detail and oozes production value that you can’t help but smile and keep on truckin. Each musical number, from the celebration of male camaraderie that is The Jet Song, through the examination of the pros and cons of living in America as a Puerto Rican through the song America, all the way to tear jerking melodies of Somewhere as the film concludes, is engaging in the best way. There isn’t a single dud in the mix, something that I can’t say for most musicals. Carried by a beautiful Leonard Bernstein composed score, and lyrics by stage legend Stephen Sondheim in one of his early breakthroughs, the songs in this film are absolutely unforgettable.

A good song however, is nothing without a stellar cast to bring them to life on screen. An ensemble cast of stage performers and screen stars, West Side Story features such legends as Natalie Wood, whose performance as Maria in this film is her most fondly remembered, Rita Moreno as the feisty Anita, girlfriend of Sharks’ leader Bernardo, Richard Beymer as heartthrob Tony, and Russ Tamblyn as general nuisance and leader of The Jets, Riff. Not only are their performances excellent, delivering their lines with enthusiasm and integrity, but they manage to hold their own when it comes to dancing, keeping pace with a number of the original show’s cast members, who joined the cast of this film as other members of the Jets and Sharks, shuffling around to different roles. These dance numbers were some of the most complex to ever be executed, especially when considering the large size and slow movement speed of the Super Panavision 70 cameras, which makes the performances of these stars even more impressive. 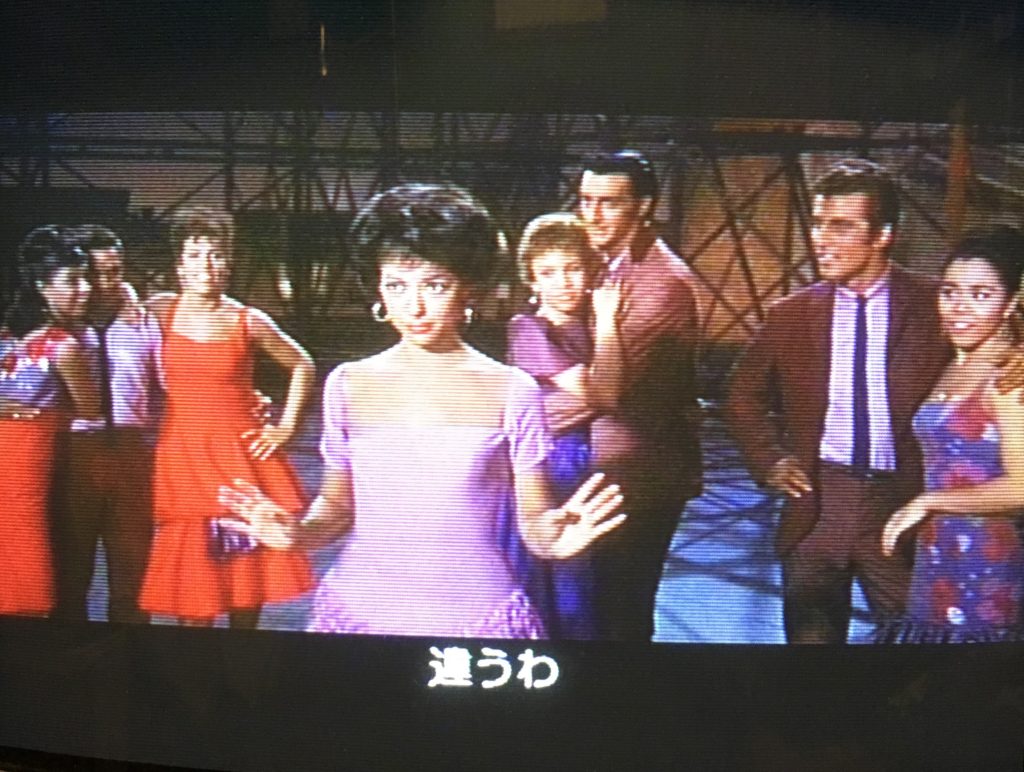 Cinema achievements aside, West Side Story succeeds at encapsulating all of the narrative weight that the original stage show brought to the table. It examines the fierce discrimination that Puerto Ricans faced when immigrating to New York City during the mid-1900s in a way that is both revealing for the time period, but delicate, softening the blow through its application of song and dance numbers. It spends time exploring the systemic discrimination exhibited towards the Puerto Ricans, and the controversy that is generated when members of one race decide to date a member of another race, something that often still happens to this day. It also manages to comfortably explore the gang culture that exists in impoverished neighborhoods, and the difficulties of trying to escape the behaviors and habits of teenage life. At the same time, it also successfully manages to make Shakespeare accessible to the non-English majors, embodying all of the most important plot points of Romeo and Juliet to keep things rolling. 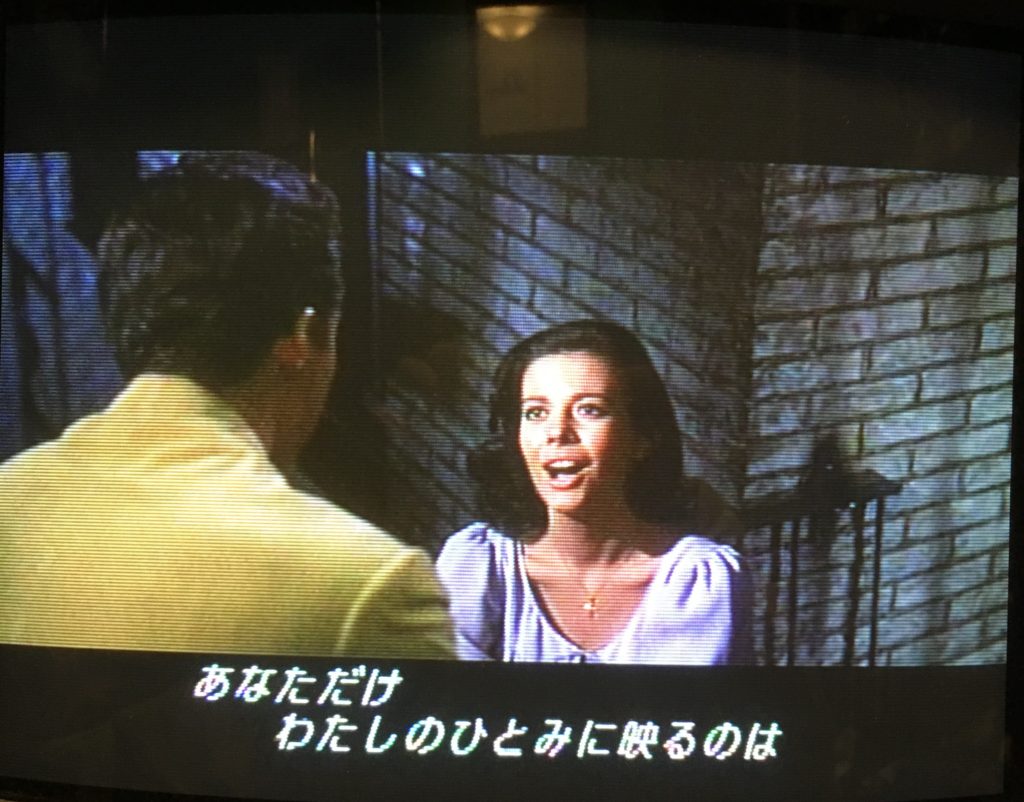 On top of its narrative force and impressive production and acting values, West Side Story is a testament to the impressive talents of director Robert Wise and editor Thomas Stanford, who both earned Academy Awards for their respective roles in the production. They manage to craft a tight two and a half hour musical that never feels bloated or on the other end of the spectrum, cinematically empty. Instead, the film is directed with a sense of passion and energy. It makes for a memorable experience, one that has transcended the ages and become a testament to the persistence of the American musical feature. Even now, 38 years later, it manages to still engage with the same aggressive likability that it possessed in 1961.

Presented as part of MGM Home Entertainment’s 70mm film series, West Side Story is presented in its original 2.35:1 widescreen aspect ratio, letterboxed into a 4×3 video presentation on Japanese Laserdisc. 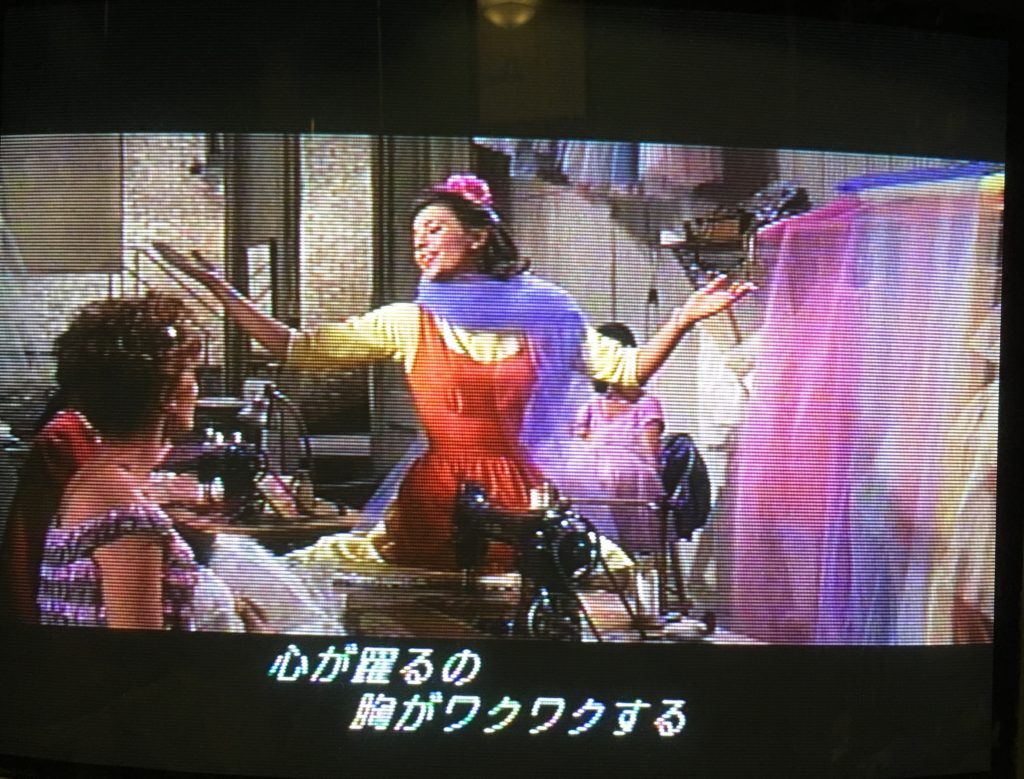 Scanned from what is most likely a 35mm interpositive element to digital video for this standard definition release, West Side Story looks pretty good for a film of its age. The image features average detail for a 1999 Laserdisc release, although it most likely shares a master with the earlier American DTS and AC-3 remastered editions of the movie that surfaced as early as late 1998. Color leans a little heavily on the red side, a sign that the source they used may be getting on a bit in age, and print damage does surface on occasion. Compared to the earlier MGM and Criterion releases of the film, this release has more embellished colors and a sharper image. It isn’t perfect, but without a MUSE or Squeeze disc to compare it to, I can’t imagine there’s a release of West Story Story out there that looks any better at this time.

This release does feature Japanese subtitles that are burned into the image. They do not edge into the viewable area of the picture.

West Side Story was originally released to theaters with a 6-track magnetic stereo soundtrack mix. Unfortunately, that mix has since been lost, and the surviving tracks that do exist have been used as the basis for the 5.1 Dolby Digital, 16-bit digital Dolby Surround encoded stereo tracks, and mono audio mix that are all available on this Japanese Laserdisc release of the film. For review purposes, the film was viewed with the 5.1 Dolby Digital soundtrack included on the right analog channel of this Laserdisc release. 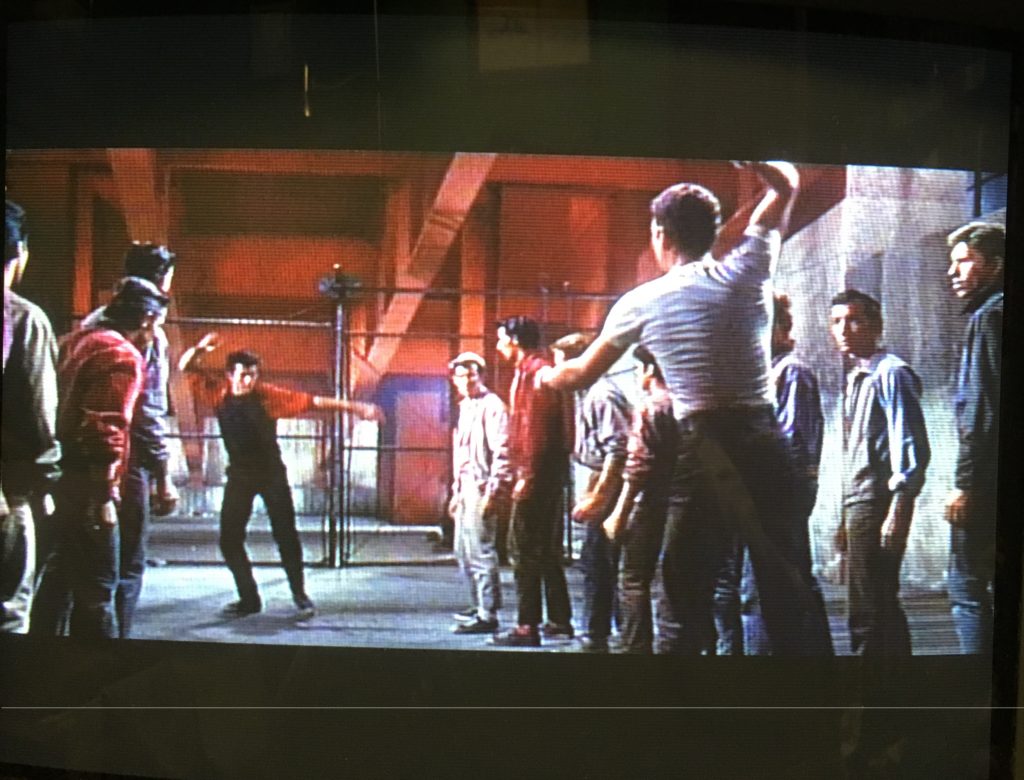 Previous releases of West Side Story only feature stereo or stereo-surround mixes of the film, and I gotta say; listening to West Side Story in 5.1 Dolby Digital feels like listening to this film for the first time all over again. Listen closely during the film’s opening shots of New York City, as the signature whistling bounces around the 5.1 sound space, and during some of the bigger musical numbers, as the surround channels are used to more effectively fill out space that was previously impossible to achieve with a stereo soundtrack. Dialogue has been centered, as per Dolby’s post 70s requirements, and much of the film’s original panning has been reduced significantly. The soundtrack has been cleaned up during the remix significantly, and generally sounds pretty good overall. Could it have been better? Sure, but that might be something you’d want to wait for the DVD release of the film for- Laserdisc is on its way out, and everyone knows it.

West Side Story, released to Laserdisc in Japan by MGM Home Entertainment, is packaged in a beautiful gatefold sleeve with accompanying white OBI strip which features information about the film’s release and technical information about the transfer. The front of the jack features artwork that looks something similar to the film’s original vinyl soundtrack release, with the film’s title in big black letters next to the film original theatrical credits. The back artwork features a number of full color shots taken and reframed from the film, as well as a cast list, a paragraph about the film, a full chapter list complete with songs in English titles, and more detailed technical specs for the disc. Opening the gatefold sleeve reveals a number of detailed black and white photos from the film’s production, as well as the complete credits for the film’s production, and a ton of information about the film’s production on the left side of the gatefold. What does it say? No idea – I don’t speak Japanese. Overall, a beautiful release in every sense of the word. 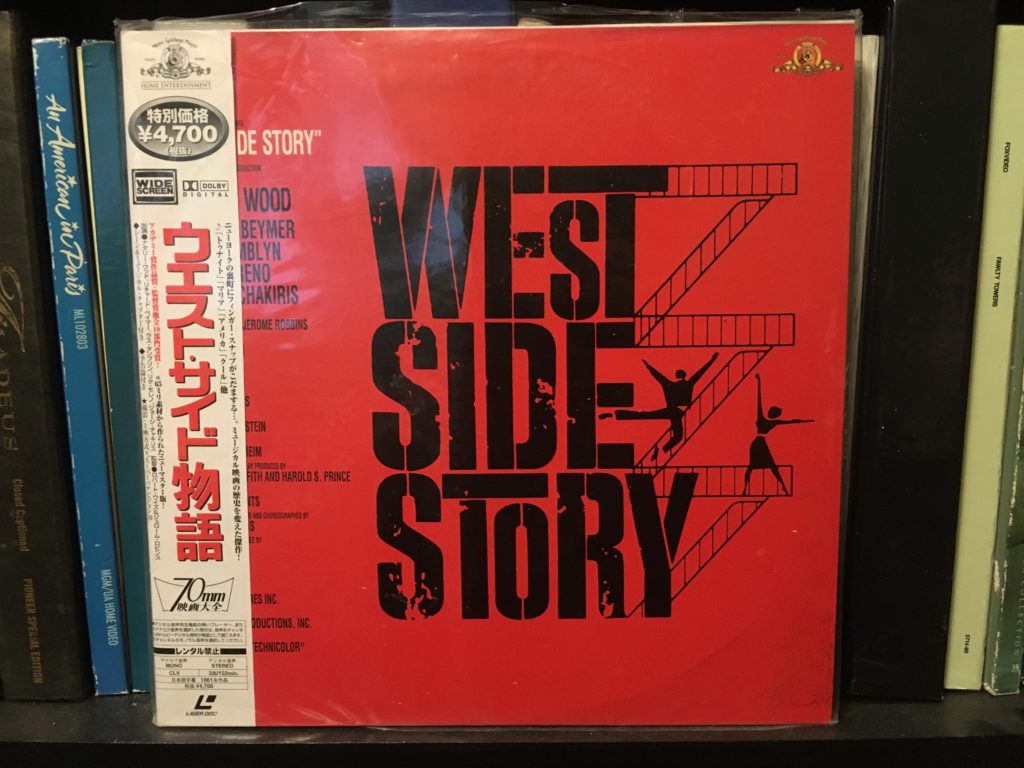 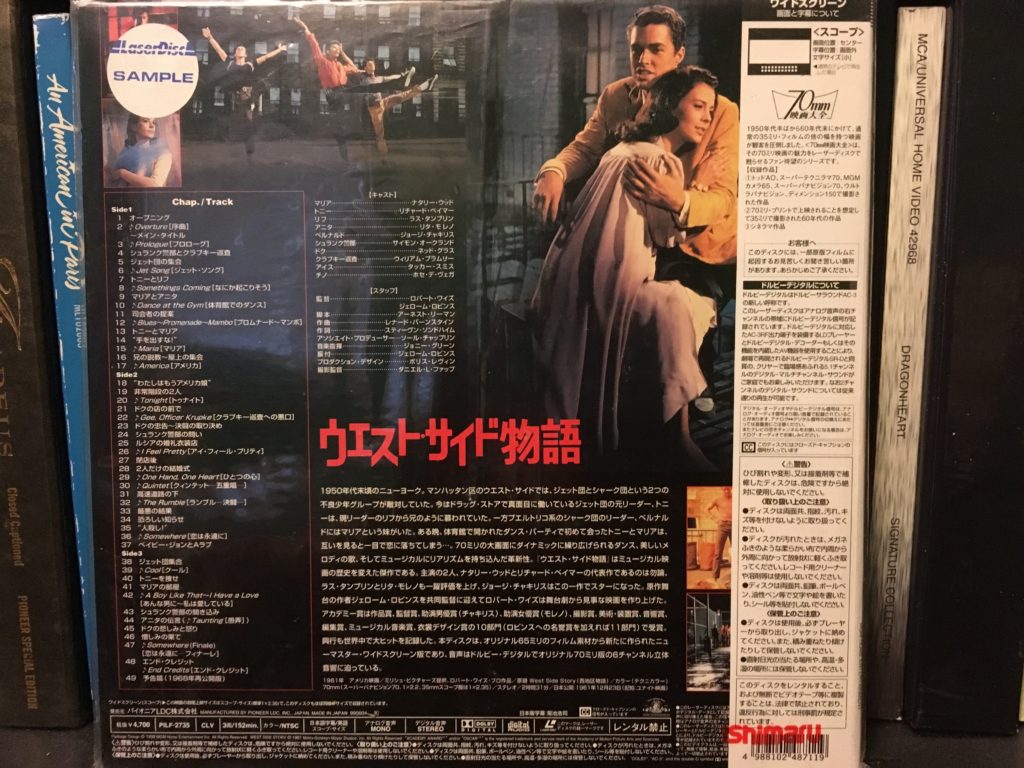 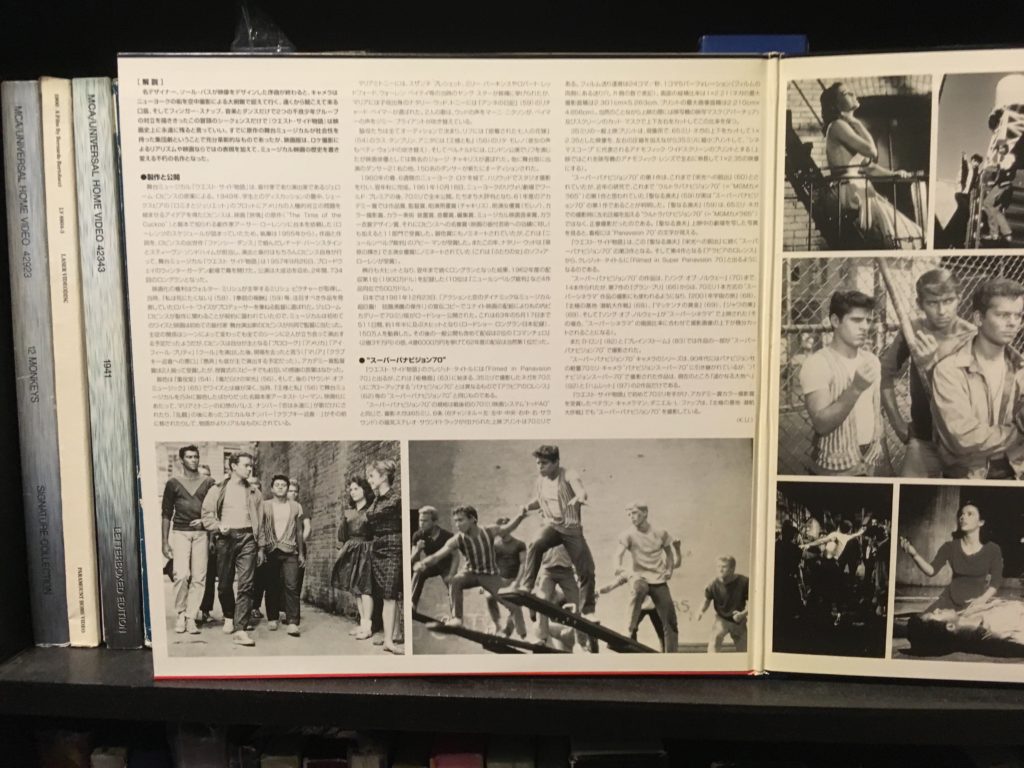 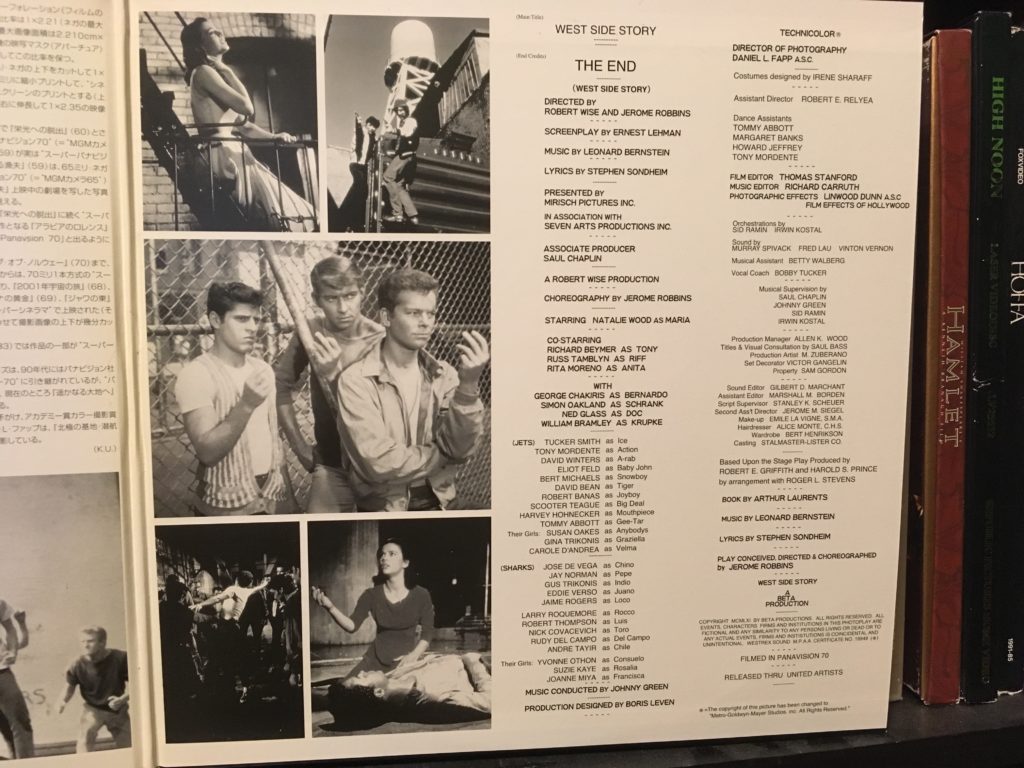 The only feature this disc includes, outside of what is printed on the film’s gatefold sleeve, is a trailer from one of the film’s rereleases. It is, after all, a non-deluxe Laserdisc release of the film from 1999. No one does extras these days – too much money to press extra discs! 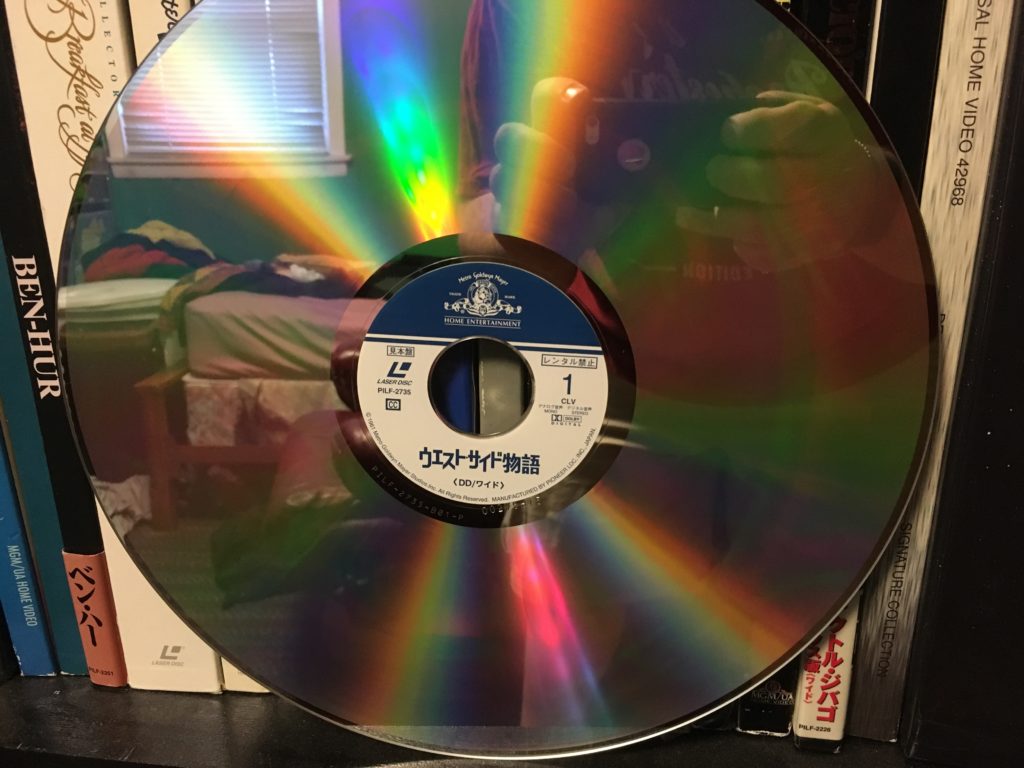 Still – great packaging. That’s why we still do this, right? 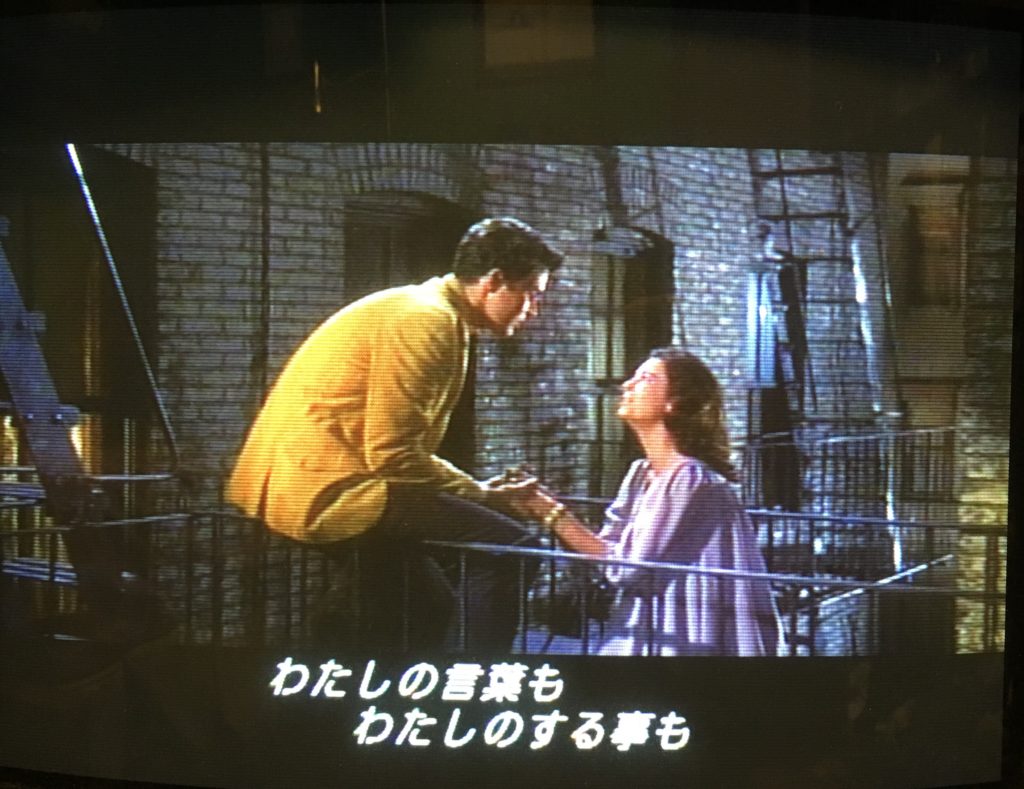 Winner of 10 Academy Awards during the 1962 Academy Awards, West Side Story still holds up well today with its culturally relevant themes, brilliant song and dance numbers, and grandiose production values. This most likely final release of the film on the Laserdisc format carries with it all of the qualities a 1999 release should have; sharp letterboxed video, a decent Dolby Digital sound mix, and a beautiful gatefold release. If you can find it, or its American counterparts at your local video store, don’t hesitate for a second. Buy this release – while you can.