We are in New York in the late 70s. We have a gathering of hundreds of gangs brought together to see one charismatic and commanding leader. Shockingly enough, something goes wrong. As a result our heroes, the Warriors, are blamed for it all. The Warriors is the story of how this gang fights its way home past all the other gangs who want to exact revenge on them.

Inspired by the Sol Yurick novel by the same name, Lawrence Gordon and Walter Hill brought us a slice of late 70s entertainment that would grow into a cult classic after some minor bumps in the road. The Warriors tells us a story that mirrors that of Xenephon’s Anabasis. Like the soldiers in Anabasis, the Warriors soon find themselves stranded in unfriendly territory and have to fight their way home against great odds. They know that above all else if they can just get home, everything will be fine. 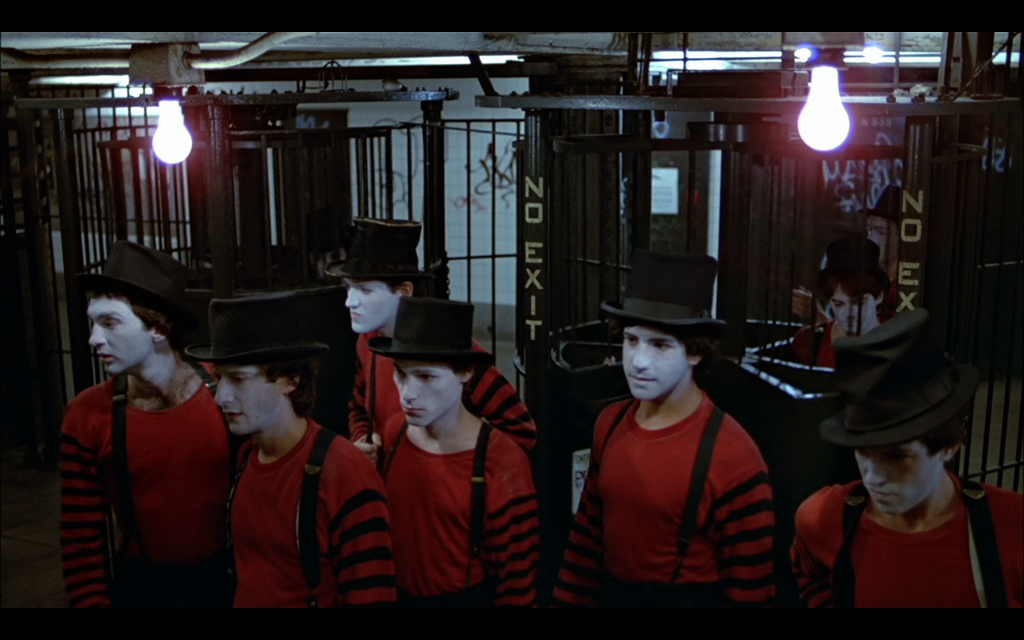 The movie starts off with the Warriors and the delegates from all the other gangs in New York attending a midnight summit led by the charismatic Cyrus (played fantastically by Roger Hill) of the Gramercy Riffs. When somebody shoots Cyrus, all chaos breaks out and the Warriors are blamed for the murder. And so starts their Anabasis-style journey home. The soldiers in Anabasis are in Persian lands and must fight their way back to the sea and their Greek cities. Likewise, the warriors are from Coney Island and find themselves stuck in the Bronx and hunted by all the gangs in New York. 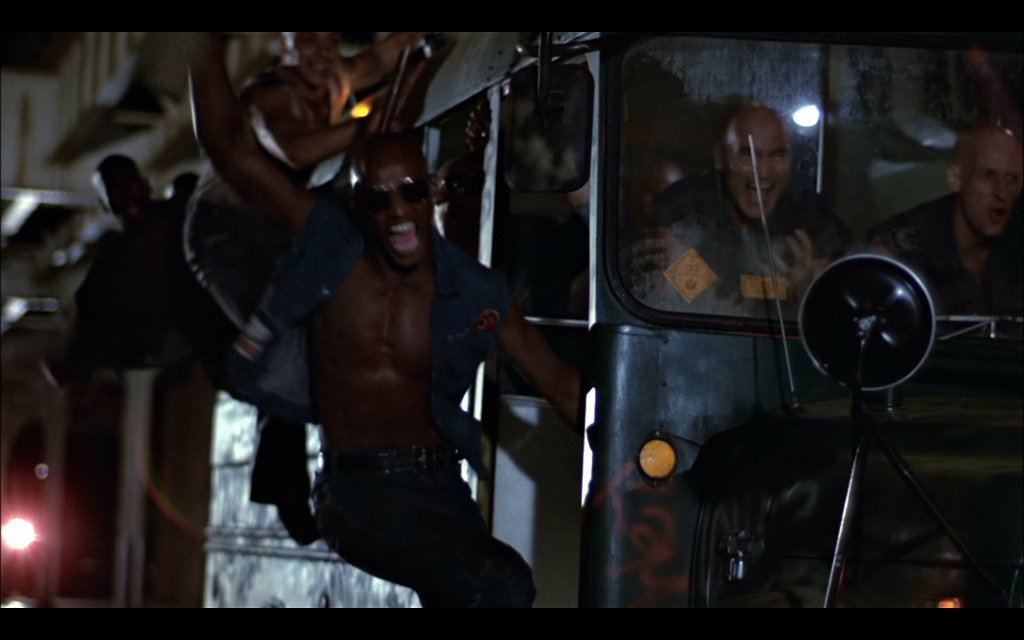 Along the way, nothing really seems to go smoothly for the Warriors. Every time things seem to be working out for them, something comes up to derail them again. This allows the movie to present us with a number of entertaining fights with a number of colorful and interesting rival gangs. Unfortunately, through the events we lose some of the members of the gang, but we even pick a new one up. While it doesn’t feel good to lose some of the members the way we do, it does enable the movie to add some consequence and gravitas to their actions. 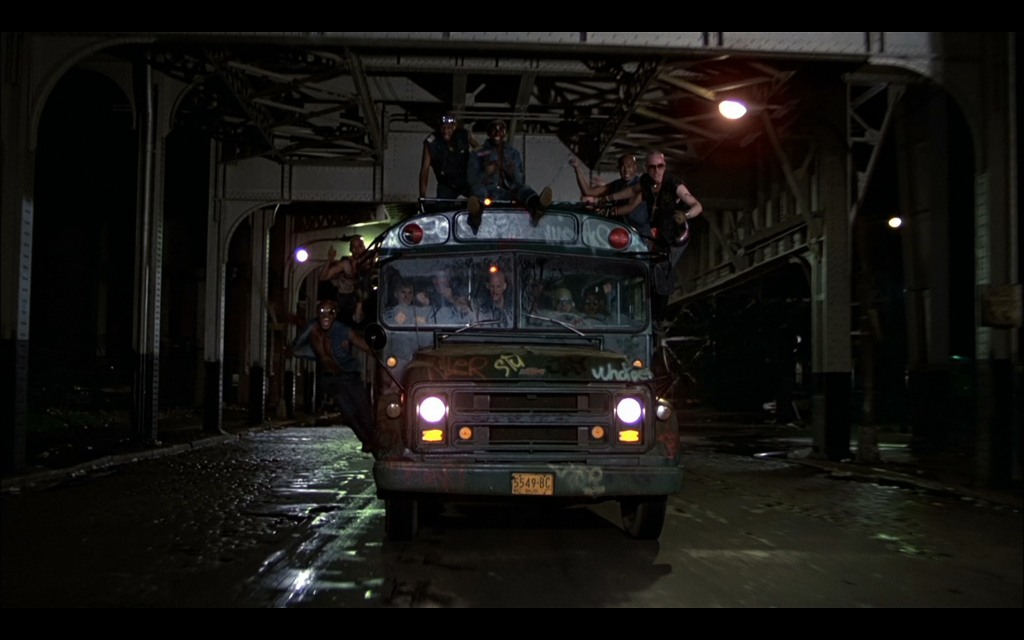 There are a few things that have helped this movie achieve cult popularity. First, we have a classic story of this group trying to get home while everyone stands against them. It is not a new story, but when told well it will always be one that fans can rally behind.

Second, there is a lot to like in the gang members and we get to know them better throughout the movie. We have some impetuous ones and some reserved ones. We have the leader who is always doing what he can to get the whole group home safe. We even have ones that have their weaknesses and don’t know when to reign themselves in for their own good. 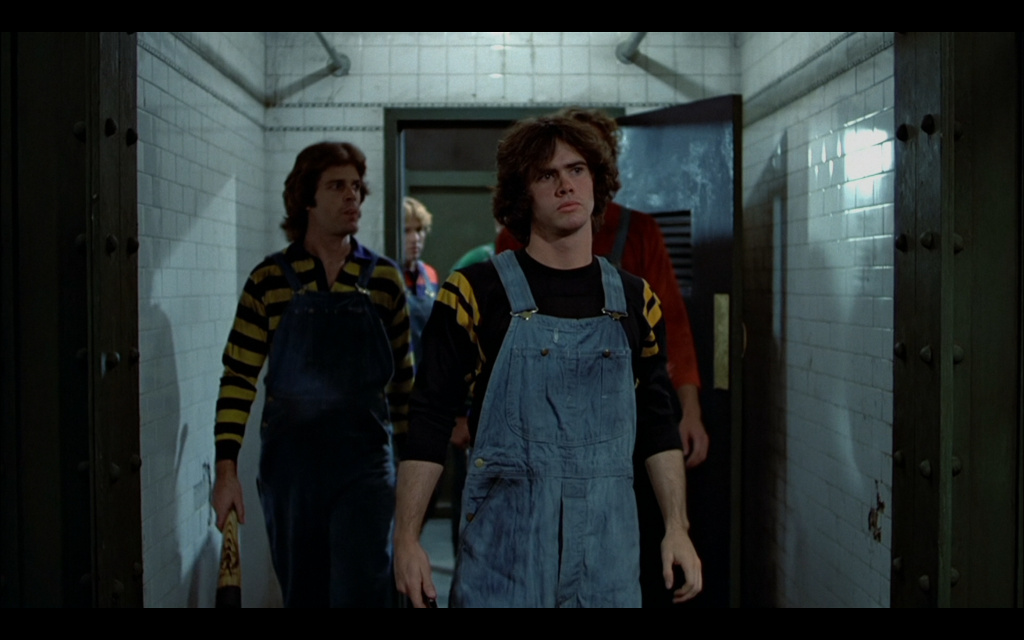 Third, the antagonists make for great entertainment. Not only are there hundreds of them overall and dozens we get extended time with, but they are interesting and varied. The tough as nail female gang is excellent in how they hide their true intentions to lull the protagonists into a false sense of security. The baseball furies (pictured below) are some of the most colorful antagonists I remember seeing in a movie like this. There is even have a gang leader that coasts along everywhere on roller skates. 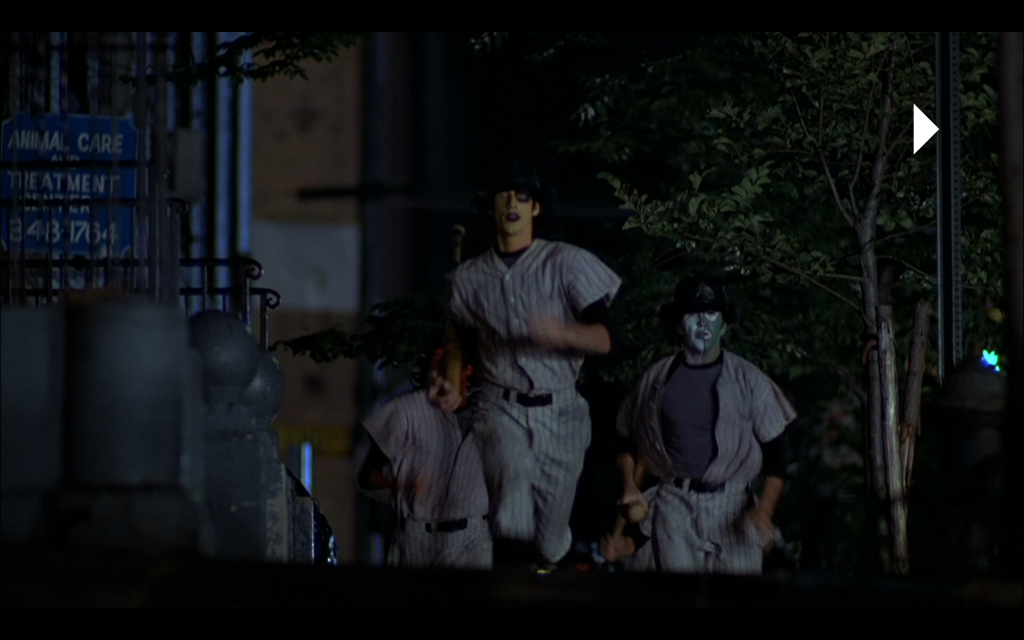 All these pieces come together in a fun and effective thriller chase adventure with its own personality. There are certainly some sad and darker moments in The Warriors, but the movie does a great job in also balancing it out with more fun and lighter moments throughout. The colors and characters often times bring a surreal feeling to the movie. The cut presented on this disc also has comic stylized wipes from one scene to the next added in by the director. The movie rarely lets up for too long. The score also does a great job of reinforcing the pace of the movie. 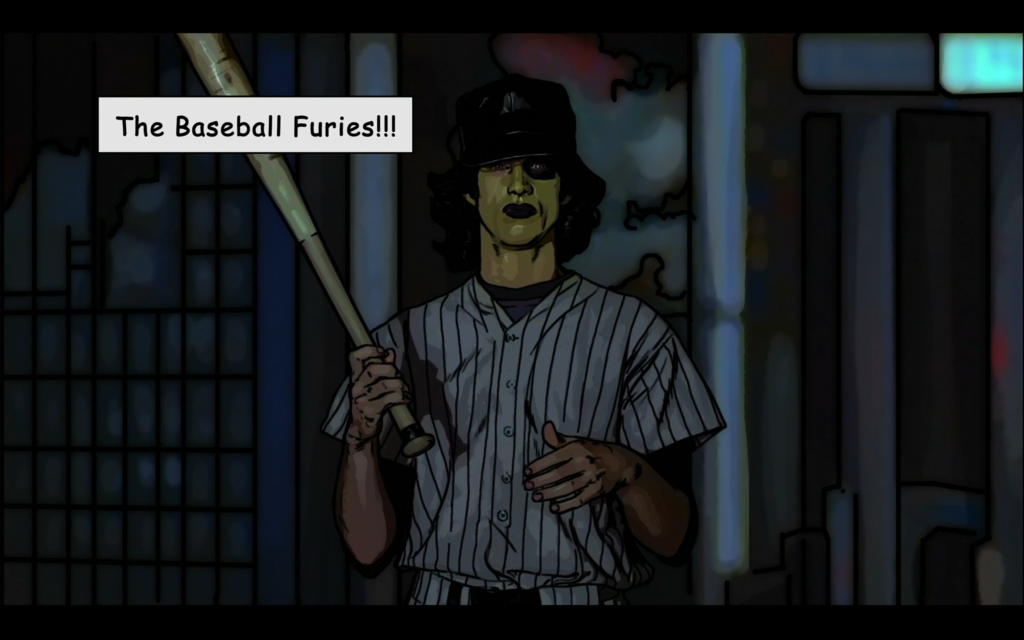 Another factor that might influence its cult classic draw is its troubled theatrical history. At the time of its release, the movie was associated with a lot of violent occurrences at theaters. The movie was initially successful, but it drew in a lot of people who were prone to violence or vandalism. As a result, theaters had to bring in security and many theaters removed it completely to protect themselves from loss. Paramount also nearly removed all advertising following these incidents. With no advertising and fewer places showing the movie, the success was severely hampered. It is possible that this has actually had a positive effect on the movie in more recent years. I know that the history does draw some people in to see what caused such a ruckus. 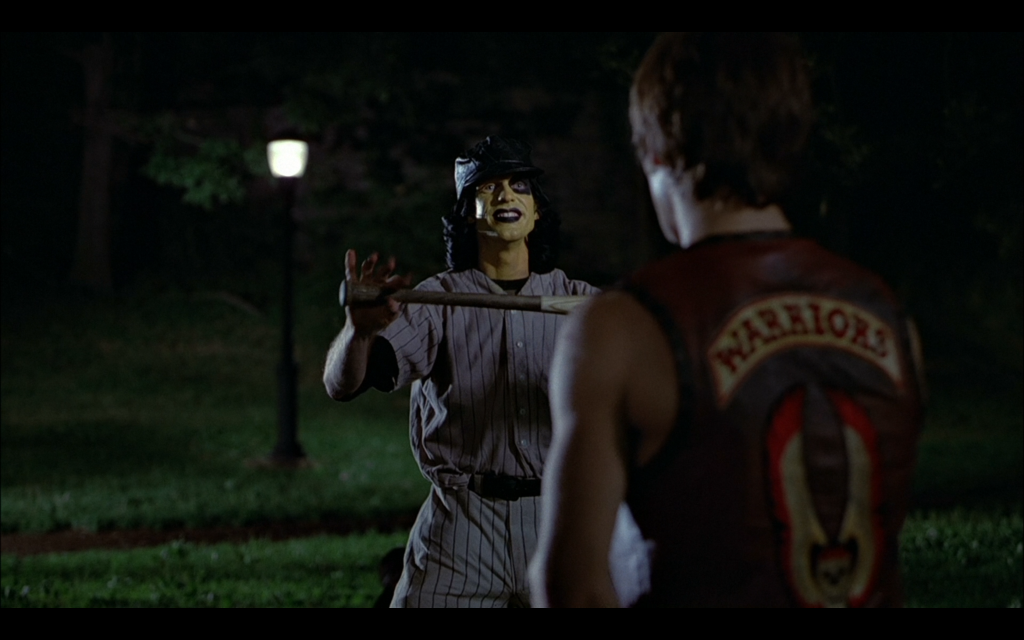 While not the deepest film, The Warriors is a fun, yet sometimes dark and frequently frantic film. It’s hard not to have fun while watching as they run between encounters and colorful costumes scroll by scene after scene. It is definitely worth checking out for anyone who enjoys action. 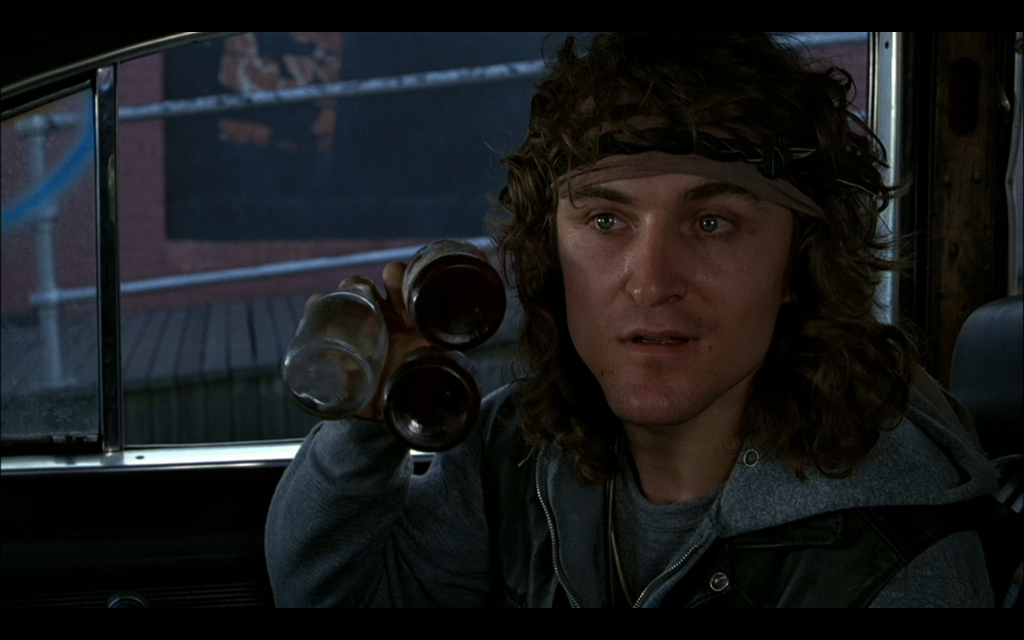 Paramount has done the film a solid with this transfer. For a movie from the late 70s, it looks surprisingly clean and sharp. It also doesn’t look like they went overboard with any DNR effects. Most everybody’s skin tones look the way we should expect them to. The dark scenes also look agreeably clean and smooth.

Here we have a disappointingly limited Dolby Digital 5.1 audio track. On the upside, the score sounded pretty good every time it kicks in. On the downside, the surround is not as effective as it should be. Additionally, the scenes that should have powerful and overwhelming and enveloping sounds never really seem to hit the appropriate levels.

The extras on this disc consist of the theatrical trailer and a documentary of sorts split into four parts discussing the movie:

The Beginnings – Here we learn about the origins of the story from the producer Lawrence Gordon stumbling upon a discount rack book missing its cover and optioning it on a lark. We also get some entertaining anecdotes about the casting. One such anecdote, “I had to give him the job. He picked the fucking table up.”

Battleground – In this segment, we learn about some of the challenges of filming in short New York summer nights and developing relationships for using the locations. Production crew and cast members discuss the experiences of shooting some of the iconic scenes.

The Way Home – This segment is focused on the costumes, the gangs and the fights on the journey home.

The Phenomenon – This focuses on the work following the filming and the response. Talks centering on the editing process and scoring the scenes. This is a bit of a treat for me, as I really like how the score and the cuts work in the movie. I am a little sad that they removed the Orson Welles narration in the movie, but not all ideas work out. You also get a little insight into the controversy that hit while the movie was in the theater.

Your money will also net you a very standard package for the Blu-ray. The standard case and nothing really new in the artwork department either. 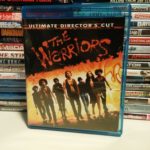 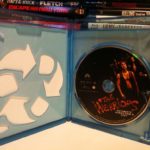 Can you dig iiiiit? I sure can. This release is often bargain priced at under $10. It doesn’t revolutionize cinema, but you really shouldn’t be taking this one so seriously anyway. The Warriors is a fun comic book sensibility filled romp through the city of New York at night. This disc has a decent selection of extras and solid video. The audio isn’t exactly impressive, but not really disappointing either. This is easily the best it has looked on home video and I’d rate it a safe buy.