War for the Planet of the Apes is the third and final movie of the re-rebooted Planet of the Apes Trilogy, Caesar (Andy Serkis) leads his Apes in a final conflict against the mad Colonel McCullough. Director Matt Reeves is fond of pitting humanity against nature in his films, and this movie is no exception to that pattern.

First off, I must acknowledge that this trilogy has brought an amazing and unique scifi visions to life. The humans are the clear antagonists of the series, the Apes dominate the screen time and in a fun twist communicate primarily through hand gestures, and the special effects work and motion capture work is breathtaking and revolutionary throughout all three films. Andy Serkis deserves his moment in the spotlight and it is truly amazing to see a man who started his career as a creature feature character actor helming a Hollywood Blockbuster trilogy that has brought in over a billion dollars of ticket revenue from cinema goers.

While I enjoyed this unique spin on a classic during the first film in this series (Rise of the Planet of the Apes), I feel like something was lost in adapting the concepts which began in that movie into a trilogy and it really shows here in the finale, War for the Planet of the Apes. I’m not certain Caesar’s tale merited 4 more hours of storytelling after the first movie, and the plodding rate at which War dragged during its 2 hour and 20 minute runtime did little to make me think otherwise. I’m normally a big fan of vastly original concepts coming to life on the big screen, but I feel like I missed the bandwagon for War.

I went in with an open mind, but there just wasn’t enough here to get me invested in the story. I felt like I was watching another adaptation of Cormack McCarthy’s The Road with Great Apes thrown in for good measure. Much like The Road, the setting is incredibly bleak. Yes, the Apes themselves look amazing, but the movie has been made to look so drab that I feels it harms the vitality of the special effects and the natural landscapes.  War turns the incredibly lush forests of Northern California into a bleak and lifeless place. Post-production filters have sucked the color out of the film and the continuously dreary and washed color tones that dominate this film are incredibly tiring to watch. 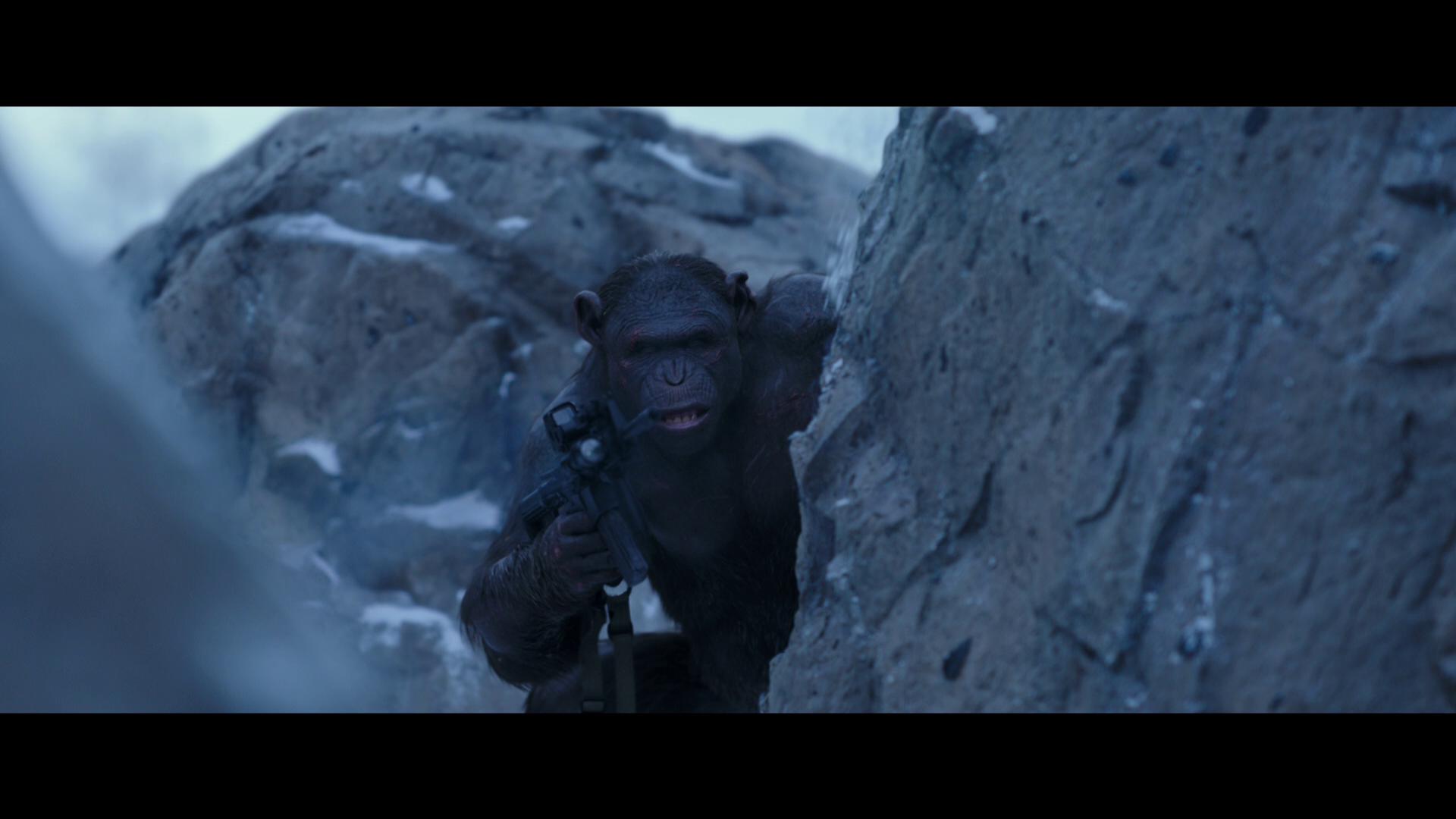 Most damning of all is the strangely muddled plot of the film (light spoilers ahead).  I’m usually good at reading movies, but this one eluded me. I don’t know if I missed key dialogue, or it was chopped up on the editing room floor, but the timeline of this film did not make much sense. Caesar’s Ape tribe is attacked by humans and his family is decimated, Caesar orders his tribe to run to the hills (presumably in the opposite direction of the human baddies), and Caesar and a crack team of his Ape pals from the previous two films track closely behind the humans and find their fortress. Somehow the hundreds of Apes he sent away to the hills have all been rounded up by the small military detachment of humans and forcibly dragged to their evil fortress without Caesar noticing. It doesn’t feel like enough time within the film has passed from the moment he left his tribe to get his revenge to the moment he finds his tribe enslaved in a concentration camp and starving to death. There’s also the question of why the humans are even bothering to round up the Apes in the first place. Imprisoning the rowdy and unreliable Apes keeps the humans from devoting all their resources to their very dire problems.

The audio in this film did an adequete job, and matched the tone we received in the rest of the film. The audio does nothing to distract me from the pacing of this film, but its hard to fault sound engineers and composers for a dragging plot. The few battle scenes were reasonably epic, and the audio did a good job conveying the scale of what was happening. I would have liked for the soundtrack to be less drab, maybe even a bit more sorrowful (anything to add color, visually or thematically, to this film). Overall it sounded appropriately cinematic via the DolbyHD track, but at the same time nothing really stood out to me as truly spectacular regarding the audio in War of the Planet of the Apes. 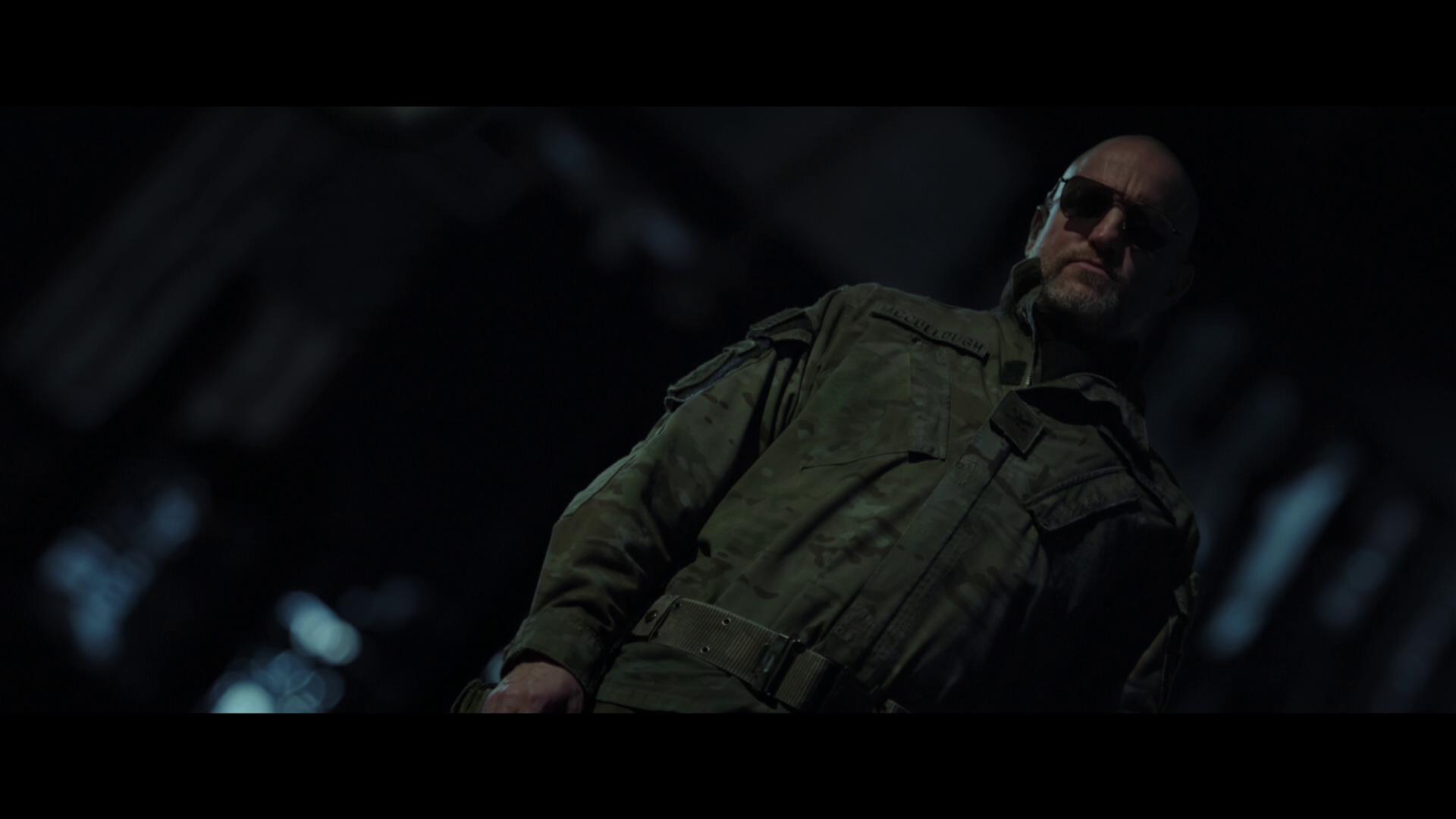 While I don’t currently own a complete 4K Setup, I did invest in the 4K version of this film as a means of future proofing my collection. 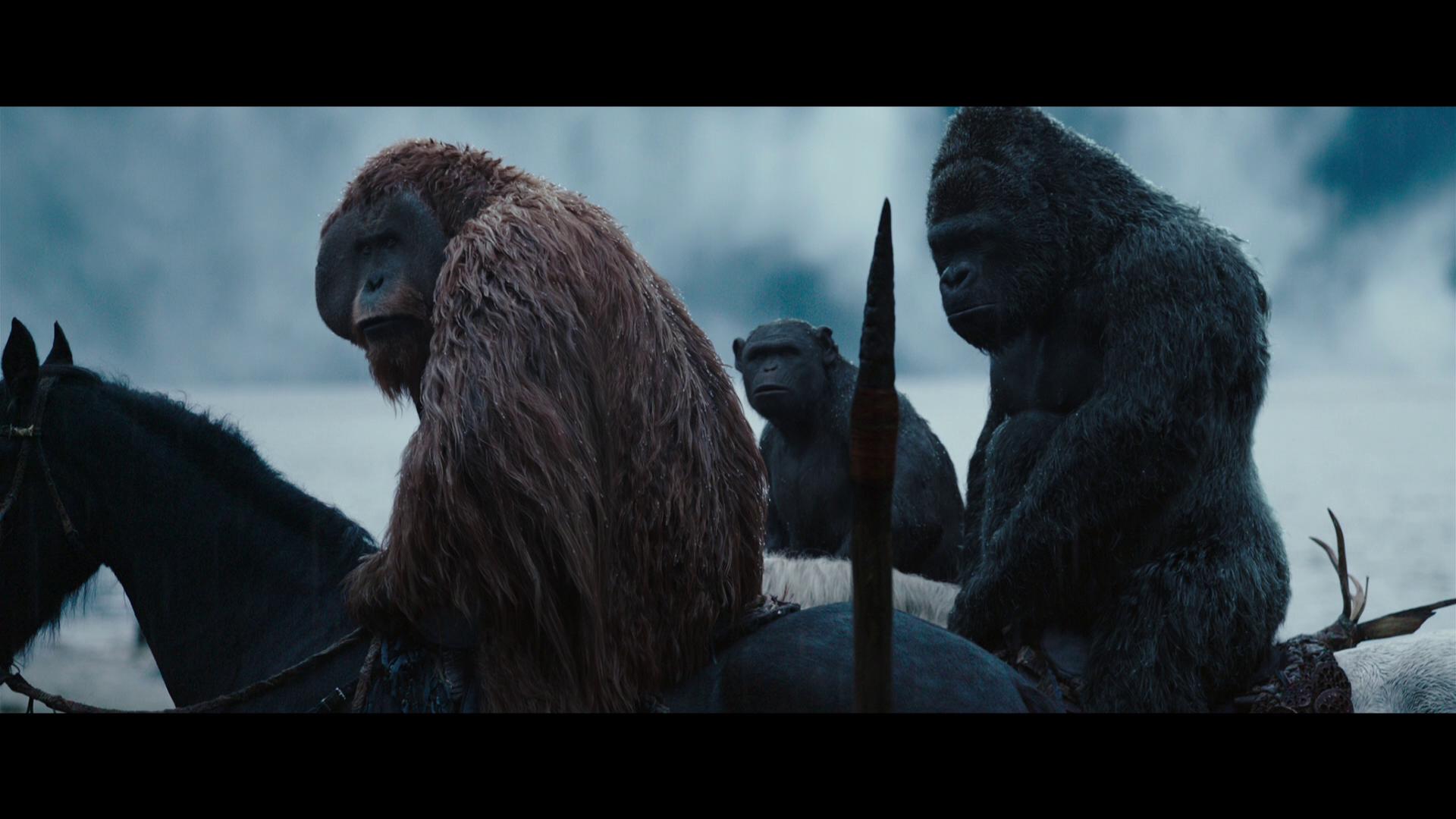 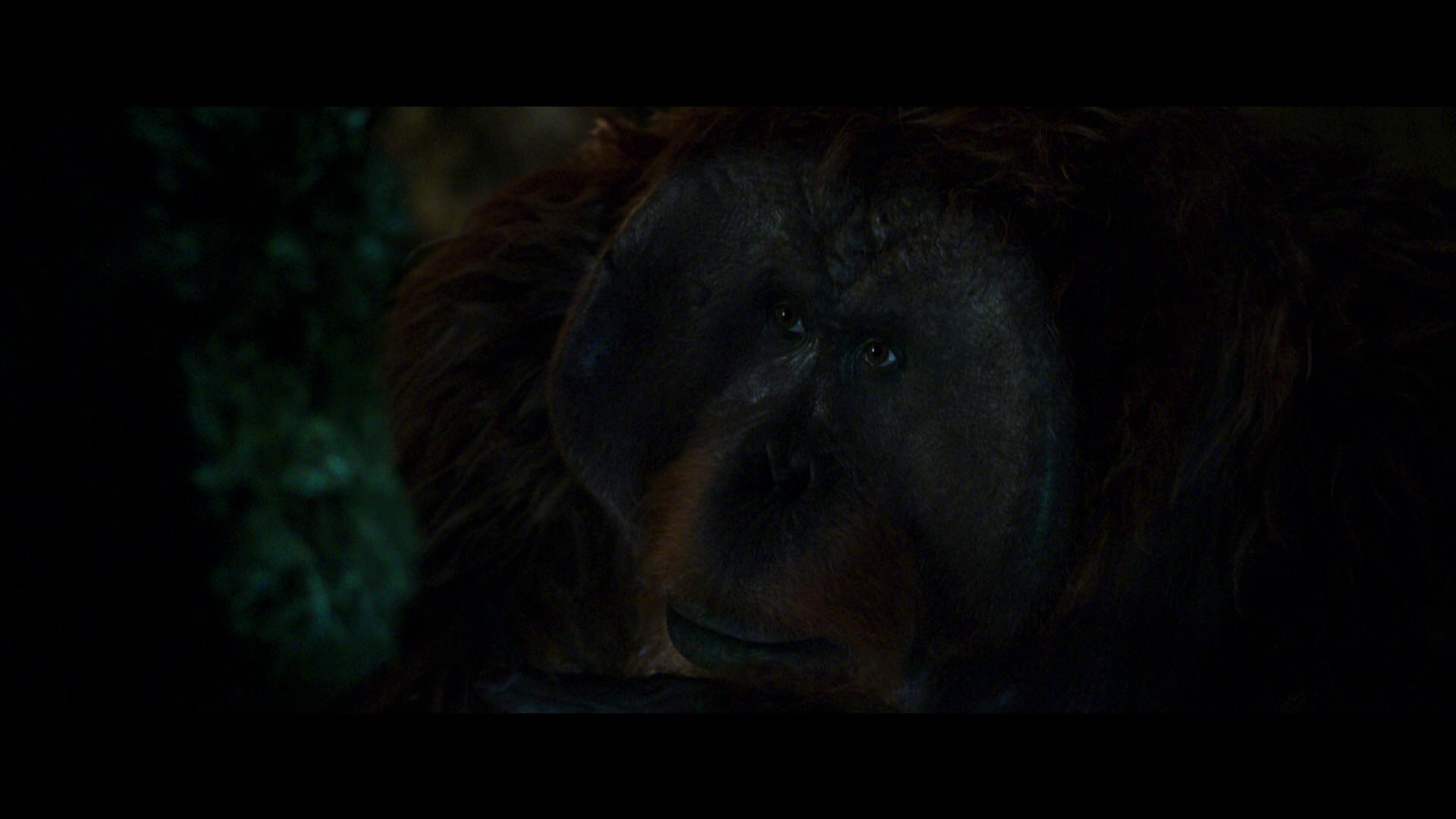 War is definely a massive technical achievement in filmmaking, but there isn’t much to watch in this film besides its special effects. The pacing of this film drags hard, and the plot is convoluted. The most dissapointing thing about this film is the waste of a 4K UHD release. While I have only viewed the standard Blu-ray version, I chose to purchase this film’s 4K UHD release with the blind hope that the 4K Resolution and HDR would help the first class effects in this film really shine after I upgraded my setup enough to appreciate it. Sadly, after seeing the bland digital color filters this film has been harshly subjected to and learning that this film was digitally mastered at 2K, I’m not sure there is much room for improvement via the 4K UHD disc. You should judge this with your own eyes, but I feel that HDR really only helps films mastered at 2K when the color gamut is more broad than what we received on this release. Speaking in general, I was not very impressed by War for the Planet of the Apes, and I don’t feel like it did a good job in justifying a trilogy about Caesar’s tale. The end of humanity and the rise of the Apes simply should not be this boring. 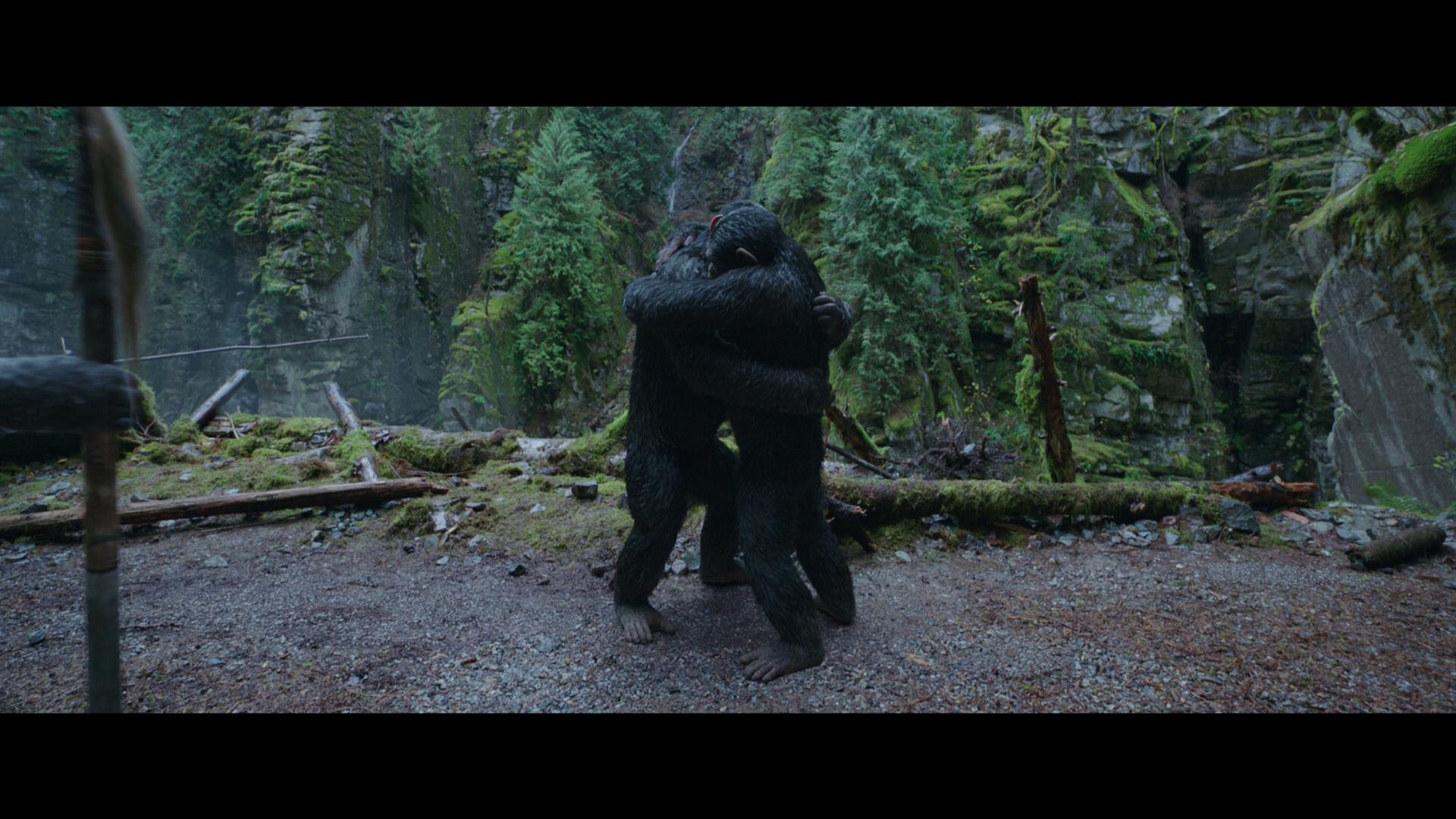