There’s something to be said about a movie that’s so sure of itself, that it secures permission to dim the exit lights in the theater to heighten the tension in the room during the last reel. Wait Until Dark, a 1967 Warner Brothers adaptation of the stage play of the same name did just that, hurdling into theaters with its famous “Warning,” trailer which primed audiences for a tense, frightening experience in which no one would be admitted during the last reel of the film, and that the lights would be dimmed to increase the fright fact. The gimmick worked, drawing audiences in droves, and securing Audrey Hepburn her fifth and final Academy Award nomination for best actress, the only award for which the film would be nominated that year. 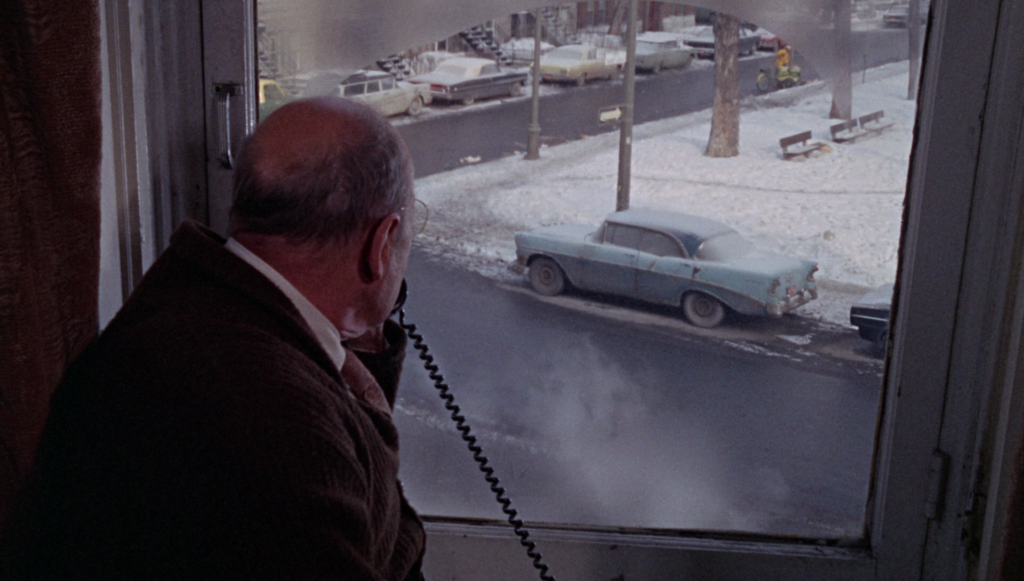 Wait Until Dark is the story of a small gang of criminals who are hired to retrieve a doll full of cocaine from the apartment of photographer Sam Hendrix, who had the doll forced upon him under false pretenses by another member of the gang on his way out of the airport. Knowing his blind wife Susy would be easier to manipulate into handing over the doll, they target her while her husband is away, assuming different roles to manipulate and coerce her into revealing its location. As their elaborate plan moves slowly, and starts to unravel around them, impatience sets in motion a shift from wordplay to violence, as Susy must overcome her blindness to stay alive till help arrives. 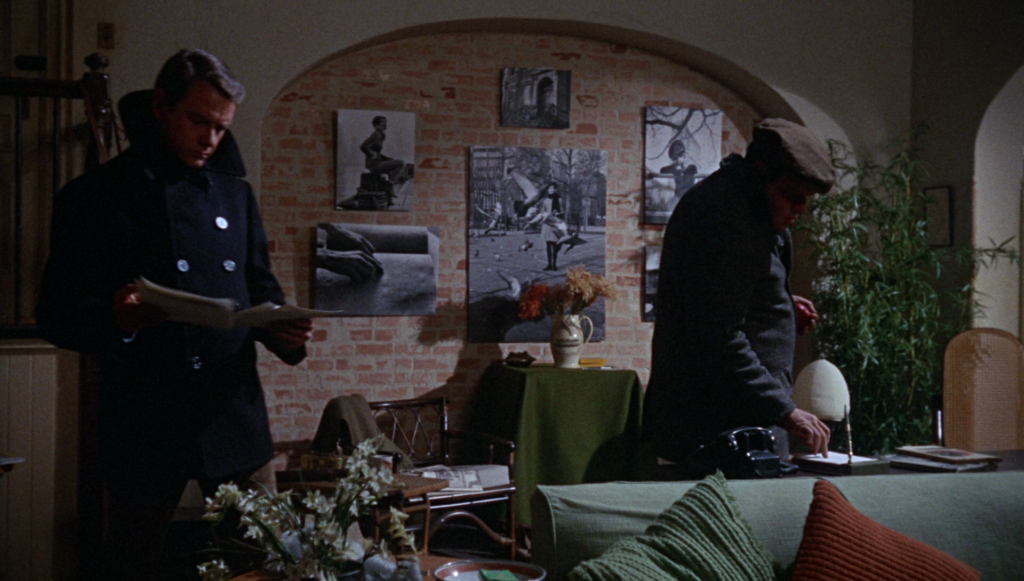 A critical and financial success in its year of release, Wait Until Dark is a slow, methodical build into a hectic and somewhat terrifying conclusion. Based on a 50s Broadway play that was just as successful in its run, it tells the story of not only a gang of violent criminals trying to pull the wool over someone’s eyes in order to further the violent drug trade in America, but also the sympathetic story of a young woman who struggles to cope with the fact that she’s been recently blinded. Much of the film is spent exploring how Susy, played by Audrey Hepburn in one of her last major roles, struggles to navigate her environment. She bumps into objects, and struggles to maintain autonomy as her husband leaves her to rely on a temperamental young girl who angrily lashes out at her when he’s away. Not only that, but suddenly strangers are barging into her house, praying on her emotions and her vulnerabilities due to her lack of eyesight. In order to find the doll, 3 men who form a loose gang of criminals take on different identities in order to manipulate her worst fears and bully her into giving up the doll she knows little about. Hepburn however plays the role to extremes, existing somewhere between convincing and utterly hysterical, almost to the point of absurdity. It somewhat undermines the character to a degree. 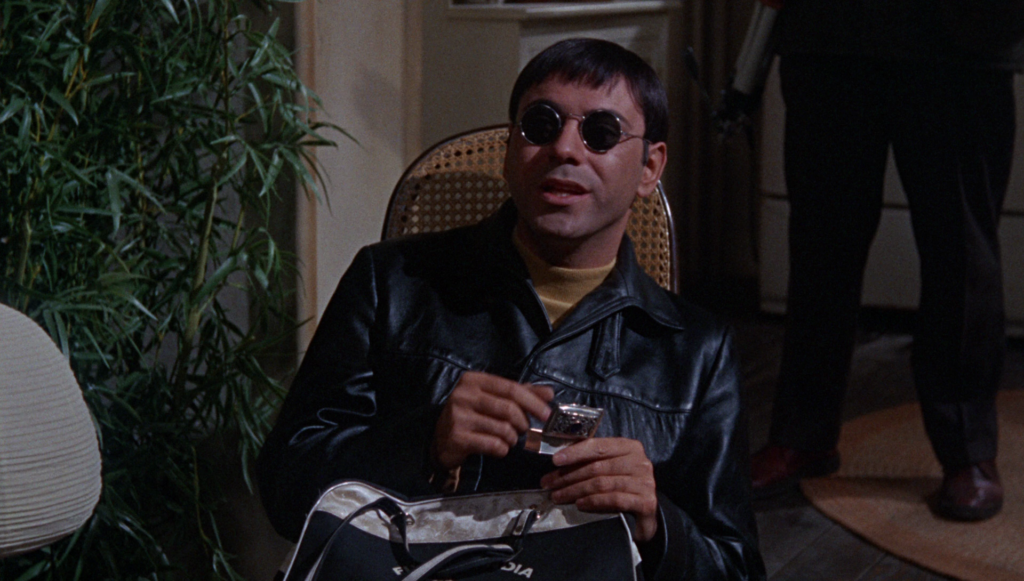 Rather than try to intimidate her using physical force, our group of criminals resort to what amounts to be no more than putting on an elaborate stage play in order to find the doll. Led by con man Mike Talman, played by Richard Crenna, they attempt to pull an elaborate ruse over Susy, convincing her that her husband is connected to a murder, and that they only way to prove his innocence is by finding and giving them the doll. It may have been amusing to pull off the whole playacting within a play routine on stage, but after awhile I find that it just sorta drags on. Maybe this was exciting in 1967, but in 2017 it moves slow. Slow enough that somewhere along the way the film sort of loses me as it attempts to build tension by adding layer after layer to the convoluted story that Mike and his partners Carlino, played by Jack Weston, and Roat, played by the unusually creepy Alan Arkin, come up with.

Set mainly in a single, small apartment, the film feels incredibly confined. It works wonders during the film’s major climax sequence, but makes the rest of the feature seem bland and non-cinematic. It feels like we’re watching a filmed stage play, but without a lot of the exaggerated acting and stage antics that make a stage play so much more exciting to see unfold. Outside of the sequence mentioned in the famous trailer, it just feels cramp, and the setting grows stale quickly as the movie trods along. 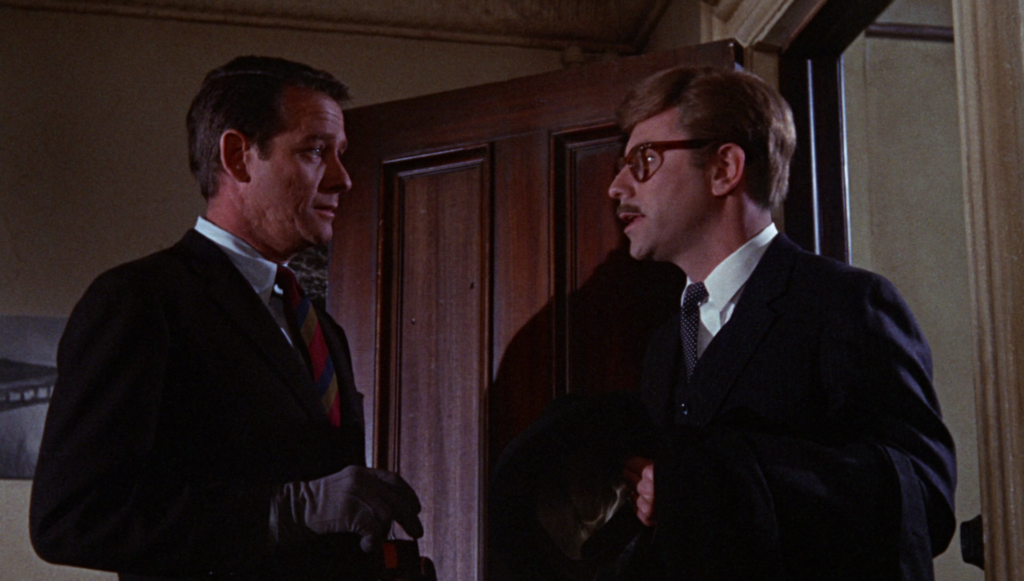 Much of the film however, is redeemed as soon as Susy begins to unravel the truth behind Mike and his story. In a moment of brilliance, the wonderful Henry Mancini score kicks in, and suddenly the film boils into an adrenaline rush as Susy must fight for her life. I’d say more, but I risk spoiling the most effective part of the movie. It’s like director Terence Young, better known for the early James Bond films, woke up from a nap and realized he was way better at concocting action and suspense rather than slow and methodical tension building.
I’ve now seen Wait Until Dark twice, and each time I nearly fall asleep during the build up into the climax, and then it hits and I’m drawn to the film like its a magnet. It’s like a switch goes off, delivering a satisfying payoff that makes an otherwise drab stage adaptation feel memorable; watching this with my mom was a treat for her, because she got to reminisce about how scary the final moments were to her when she saw it in the theater relatively close to its original release. It’s so intense and engaging that it makes it easy to look past the drab, convoluted and fairly melodramatic lead in that lasts for much of the film.

Shot on 4-perf 35mm film and cropped to 1.85:1 for theatrical projection, Wait Until Dark is presented in 1080p from a brand new HD master prepared by Warner Archive in the 1.78:1 aspect ratio. 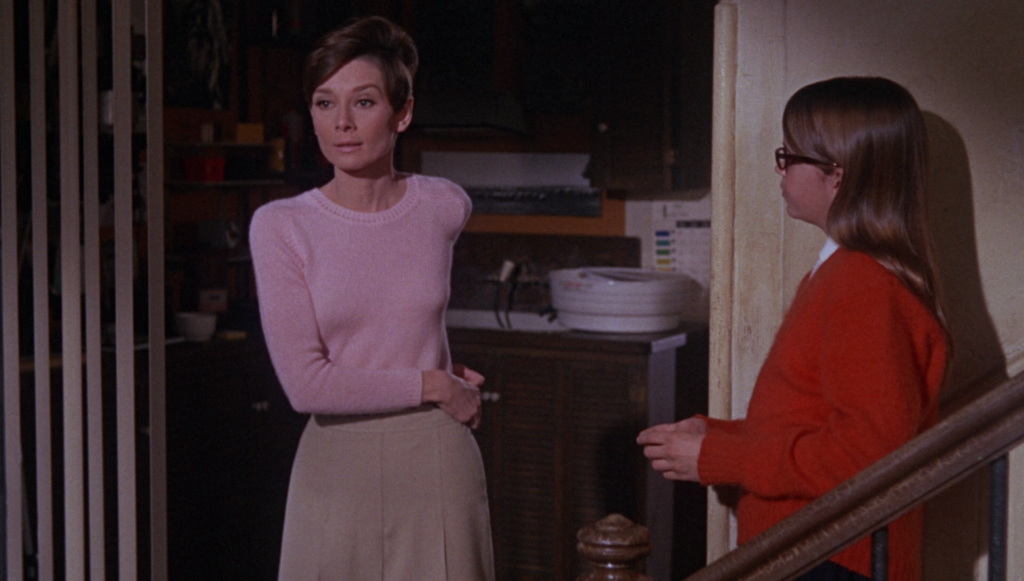 Featuring a rather grounded, naturalistic color palette, Wait Until Dark will never exactly be an eye catching film. Further compounded with the fact that it’s main set is a plainly lit apartment in New York City that becomes increasingly darker as the film continues and you have yourself a fairly bland source to showcase in 1080p. Detail is acceptable, although the film typically falls on the soft side of the spectrum. Black levels are never that impressive, and quickly become a problem during the film’s last act where often times the screen is caked in total, uneven darkness that just becomes ugly. I know that it’s primarily a limitation of the film stocks of the time, but it becomes distracting when two thirds of the screen is covered in this off-black gray color, and the last third is almost true black. Outside of the aforementioned color issues, the film upscales well on my 4K television, showcasing the transfer’s excellent level of sharp, natural film grain.

Wait Until Dark was originally shown in theaters with a mono optical soundtrack. That track has been recreated here via a DTS-Master Audio 2.0 soundtrack. 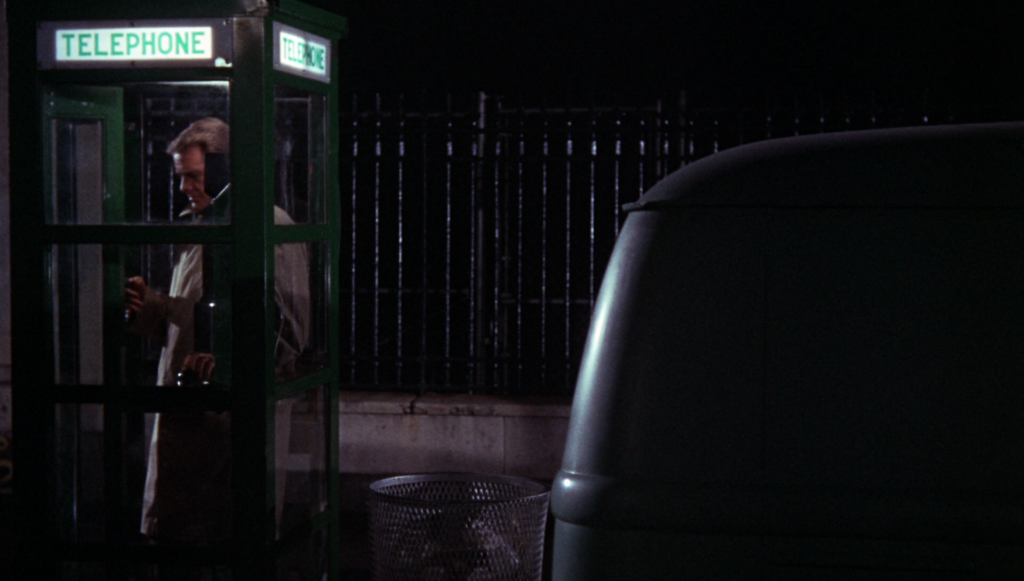 Wait Until Dark, having been sourced from a stage play, is all about the dialogue. Luckily, this track is well balanced, and the dialogue never gets lost under the score or sparse sound effects. During the climax, the track handles the great contrast in sound throughout the sequence with ease. Excellent.

Released to home video by Warner Archive, they have chosen to package the film in the typical Blu-ray keepcase. The front artwork features the same artwork used for previous releases of the film, which pulls a frame from the film’s final moments and then breaks it apart like a glass pane separating with the three lead players’ names featured above against a stark white background. The back features shots of the three leads, separated in a similar manner, next to a review quote, two paragraphs about the film, a list of features, credits, and technical specifications. A minimal, but pleasing effort from the folks at Warner Archive. 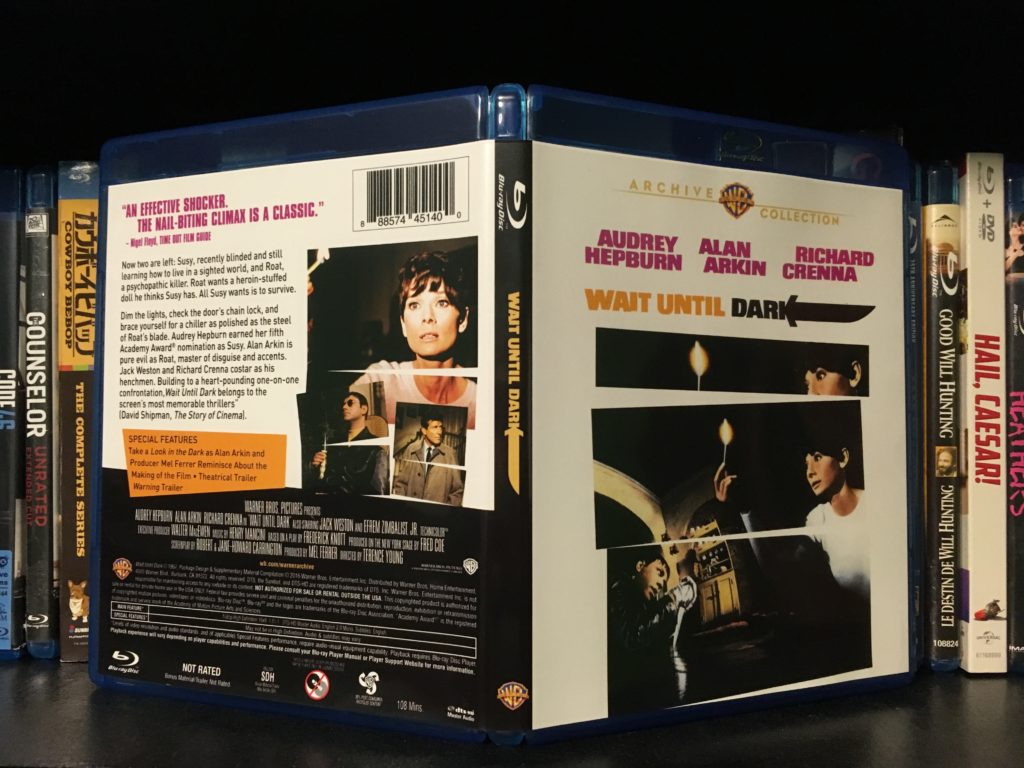 Onto the features, of which there are three:

Take a Look in the Dark – an 8 minute feature with actor Alan Arkin and producer Mel Ferrer, in which they explore the character or Roat, as well as the performances of the other actors involved in the production and reactions to the film upon its original release. Held over from a previous release of the film on home video.

Theatrical Trailer – the film’s standard trailer as seen in theaters before the film’s release, presented in 1.78:1 widescreen in a relatively good looking condition.

Warning Trailer – a softer, uglier presentation of the classic Warning trailer, which details the dimming of the lights and lack of seating during the film’s finale. I love this trailer, it’s a personal favorite of mine, so I’m glad it was included. 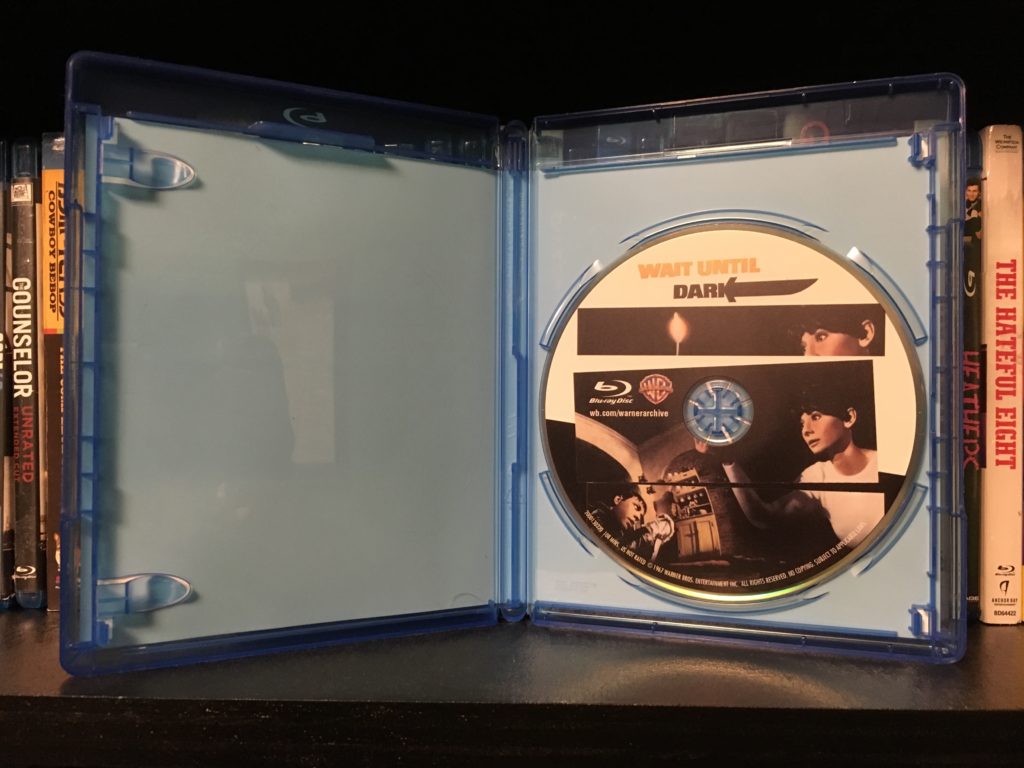 Wait Until Dark is packaged well, but it has little in terms of substantial extras which is a shame. I love the Warning trailer, but I always hunger for more when it comes to Warner Archive releases. 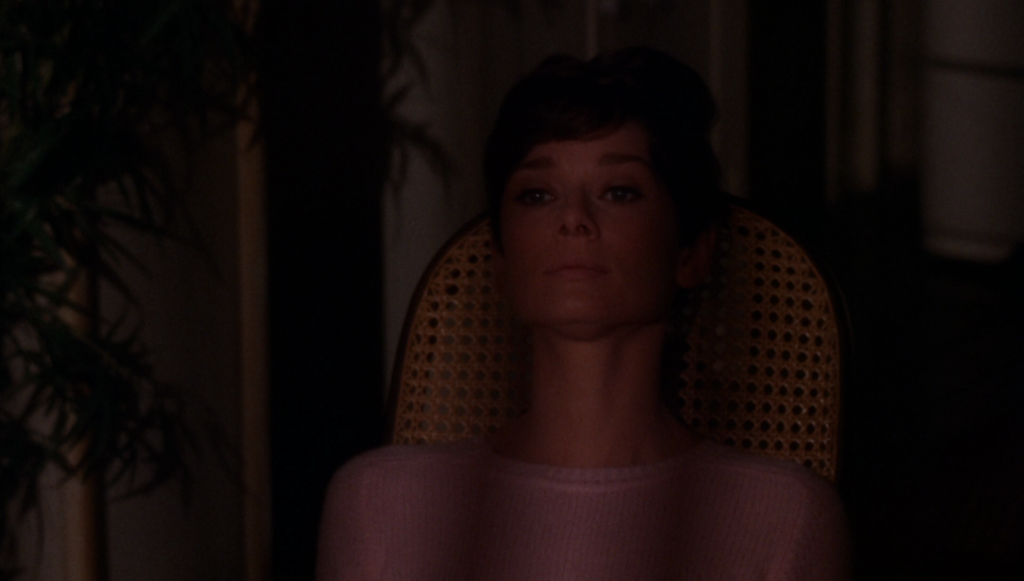 If it wasn’t for the spectacular finale sequence, Wait Until Dark would be another unremarkable stage adaptation featuring big Hollywood names to draw crowds in. However, once the lights go out, and the music kicks in, the film kicks into overdrive and becomes quite the experience. It isn’t my favorite Audrey Hepburn picture, or even my favorite Terence Young directed feature, but it is incredibly memorable if only for its last fifteen minutes or so. Warner Archive have done a fine job bringing this film to Blu-ray, with decent picture, great audio, pleasing packaging, and the inclusion of the classic, “Warning,” trailer.