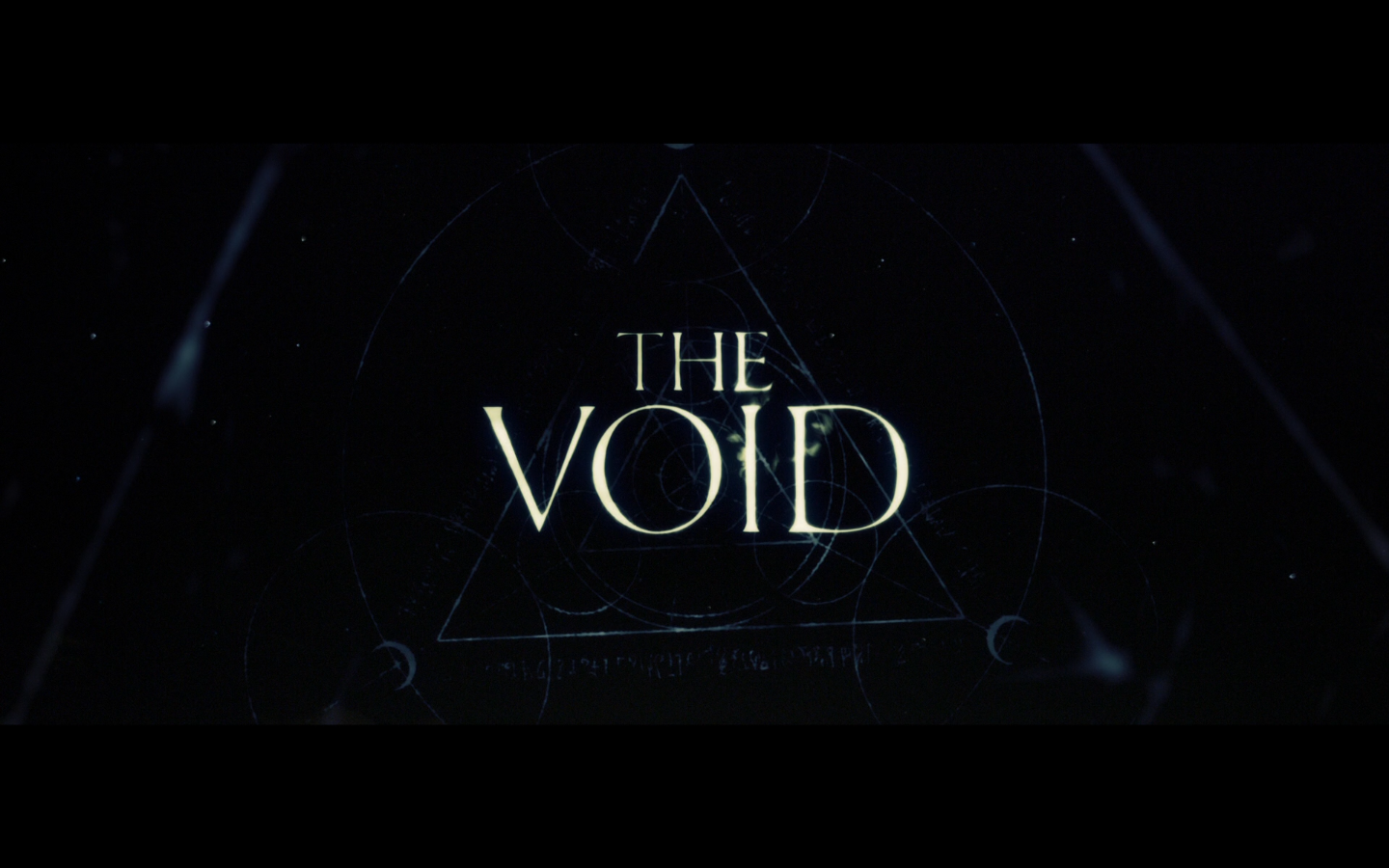 Ironing out the distinction between “fear” and “dread” seems, at first glance, a semantic exercise in nuance: looking at different shades of the same color. I would contend, however, that there is a vital difference between the two and it comes down to longevity. The modern horror film suffers from a division of labor when it comes to these two words: some rely on the jump scare, the leading music, the doom that comes straight at you: this is the “fear” side of things. The films that rely on building atmosphere, suggesting rather than outright showing what is coming, that terrorize with whispers rather than screams: these are the films that rely on “dread”. Horror films that lean towards the “fear” side of the equation are a dime a dozen, and that’s not meant to be a knock against them, some manage to rise above the morass of the endless parade of scary movies to really grab its audience by the throat. Some of the greatest slashers even manage to dip their toes in both sides of the equation, but the great horror films almost always rely on that sense of permeating dread that manages to stick with you long after leaving the theater. Some entires are legendary: Roman Polanski’s Rosemary’s Baby and John Carpenter’s The Thing spring to mind. Others are more contemporary: Robert Eggers’ The VVitch was a masterpiece in this vein. Now, horror fans have yet another film to celebrate as the latest entry in a storied line of pictures dripping with atmosphere and oozing a sense of doom. 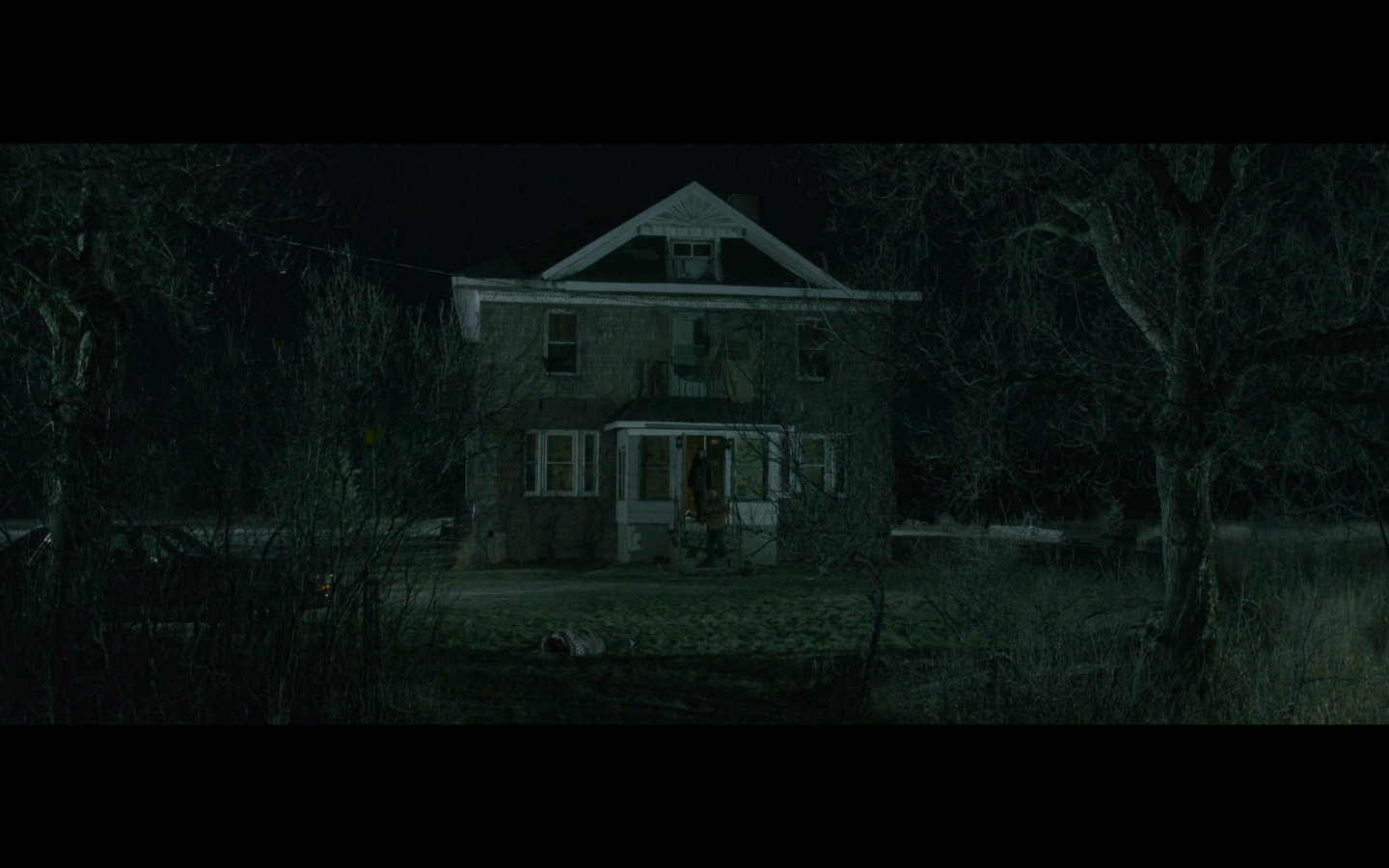 Coming from two members of the Astron-6 film collective (responsible for Manborg and The Editor), The Void is a prime example of what’s possible with the new avenues available to filmmakers with a vision. Partially funded by Indiegogo contributions, writer/director duo Steven Kostanski and Jeremy Gillespie scraped together a film that pays homage equally to the best visions of John Carpenter and Alfred Hitchcock. Wearing the influence of H.P. Lovecraft unabashedly on its sleeve, The Void is a trip that veers from the mundane to the cosmic and the orderly to the chaotic with bold strokes, strong direction, and impressive creature work. Now, after a limited theatrical run, The Void has made its way to Blu-ray for a similarly limited pressing thanks to the folks at DiabolikDVD. Does the disc do justice to this indie gem? Let’s take a look. 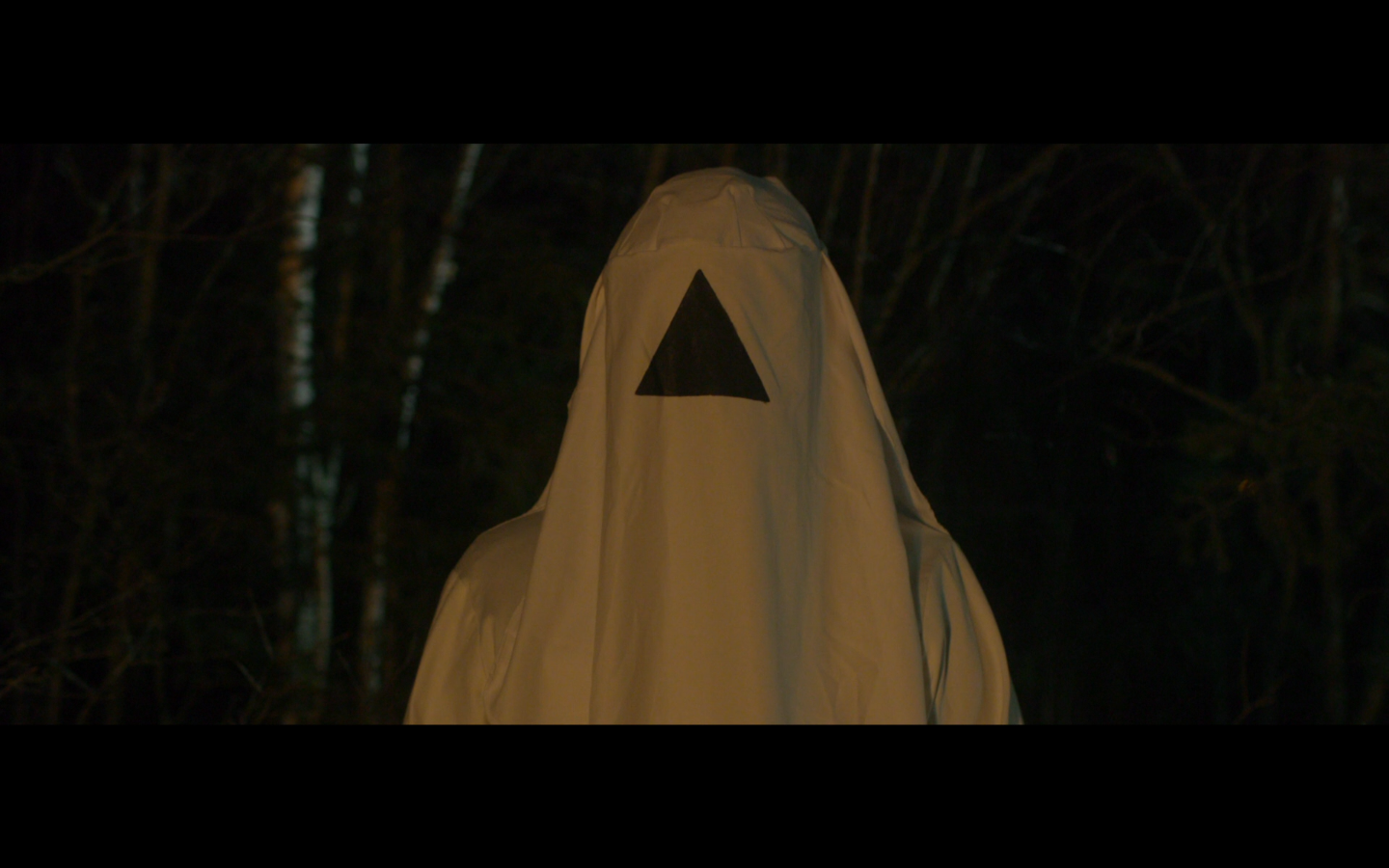 After stumbling across a crazed youth on the run, Deputy Daniel Carter (Aaron Poole) brings his catch to the local hospital. Understaffed on a quiet night, the Deputy intends on leaving the man in the care of long time friend Dr. Richard Powell (Daniel Fathers) and his estranged wife, nurse Alison Fraser (Kathleen Munroe). Before he can leave, Carter finds that the hospital has been surrounded by people in white robes and masks bearing with a black triangle who refuse to let the leave by any means necessary. Before long, the men chasing the youth Carter rescued make their way into the hospital, detailing a supernatural menace spreading throughout the area. With no means of escape, Carter and the rest of the people stranded at the hospital soon find themselves facing unearthly creatures and unholy cultists as they descend into the basement of the building to attempt to stop the apotheosis of some thing from beyond. 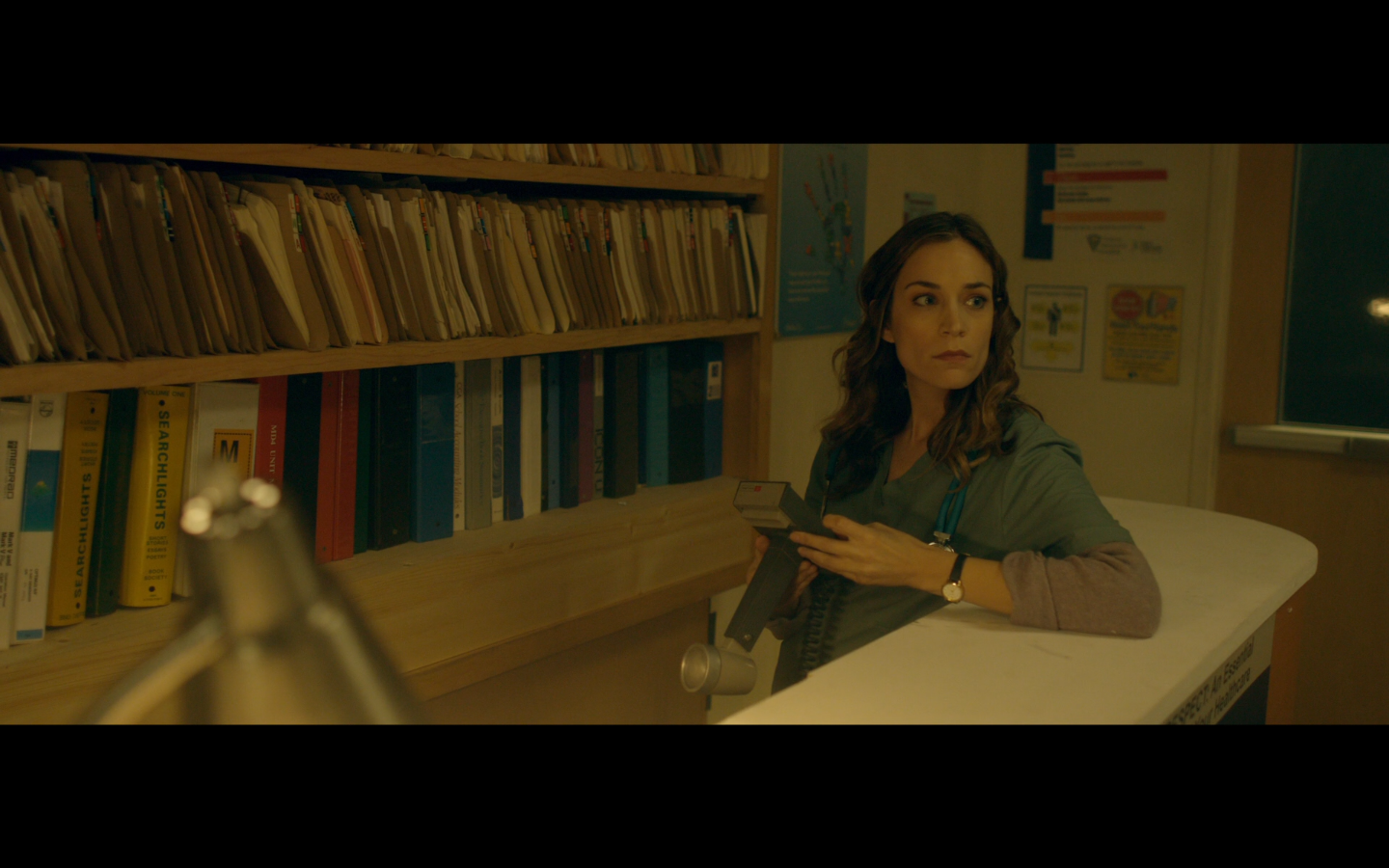 A gleeful tribute to horror films past, The Void manages to be successful where so many other horror entries fail. The creature work is used just enough to be memorable without letting the viewer linger too long on each piece and the script manages to exploit the more noteworthy tropes of the Lovecraftian archetype without losing audience in a mess of jargon. That being said, at times the relatively modest budget does shine through and you wish for another take (or two) of some lines. However, all can be forgiven on the strength of the film’s climax. A stunning set piece in every sense of the word, the director’s may flub the resolution to some extent, but the beauty of those few minutes where Deputy Carter finally faces down the villain are perhaps the truest representation of cosmic horror ever committed to film. 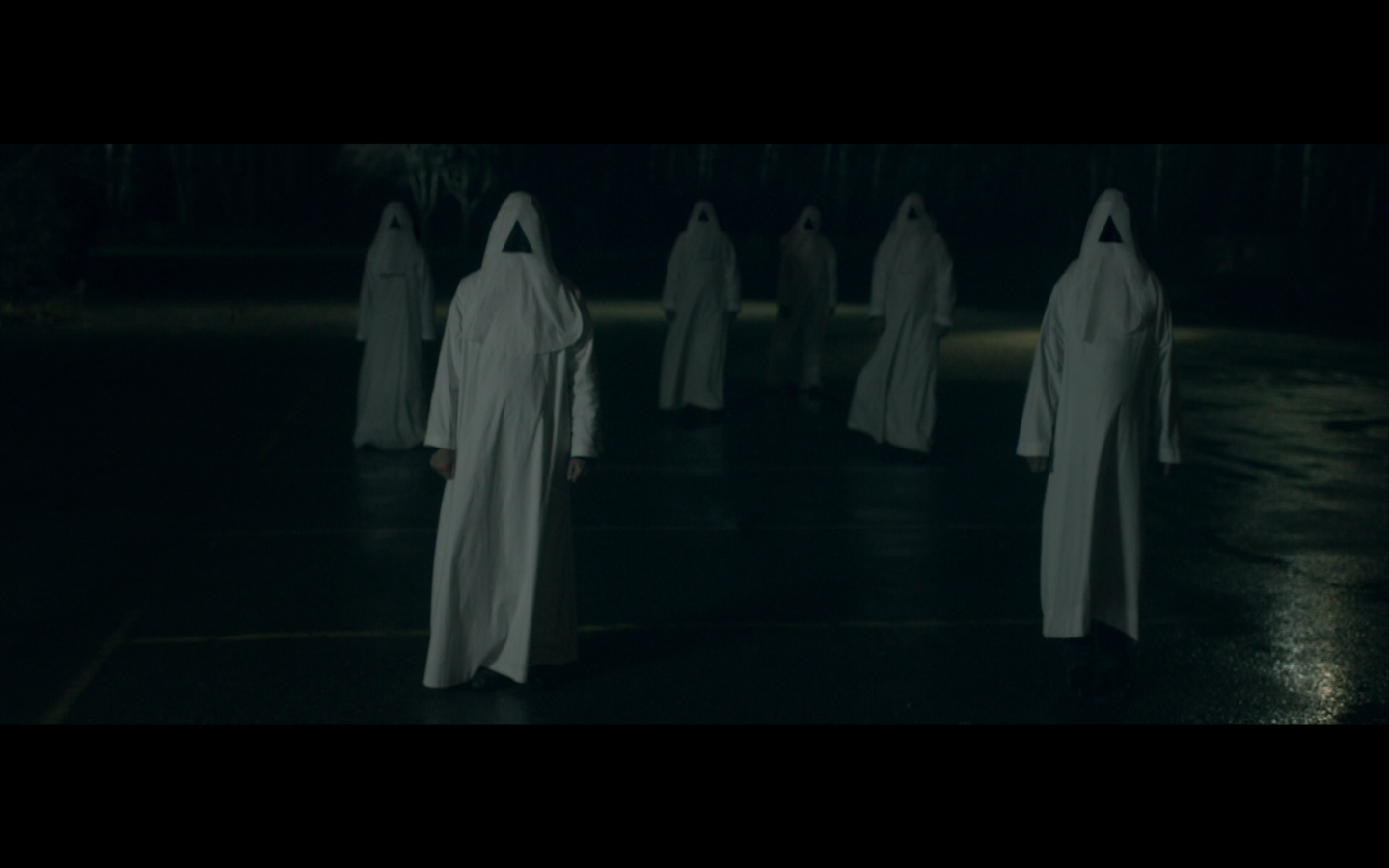 The Void arrives on Blu-ray with a stunning visual presentation courtesy of Screen Media. Technical specifications on the shoot are all but non-existent online, but it’s clear that the film was shot on video. As for the presentation itself, The Void delivers the goods. Of particular note is the richness of the blacks throughout the film. As much of the picture relies on darkness and shadow, getting this particular element perfect is of the utmost important. Outside of the blacks, detail shots both in the close-up and the long shot are crisp and clear and only suffer in moments of hue saturation, a technique that is used fairly often throughout the runtime. Outside shots suffer from minor granulation when compared to interiors, but this is a minor differential between locations. On a whole, this presentation is frankly top notch and worthy of praise. 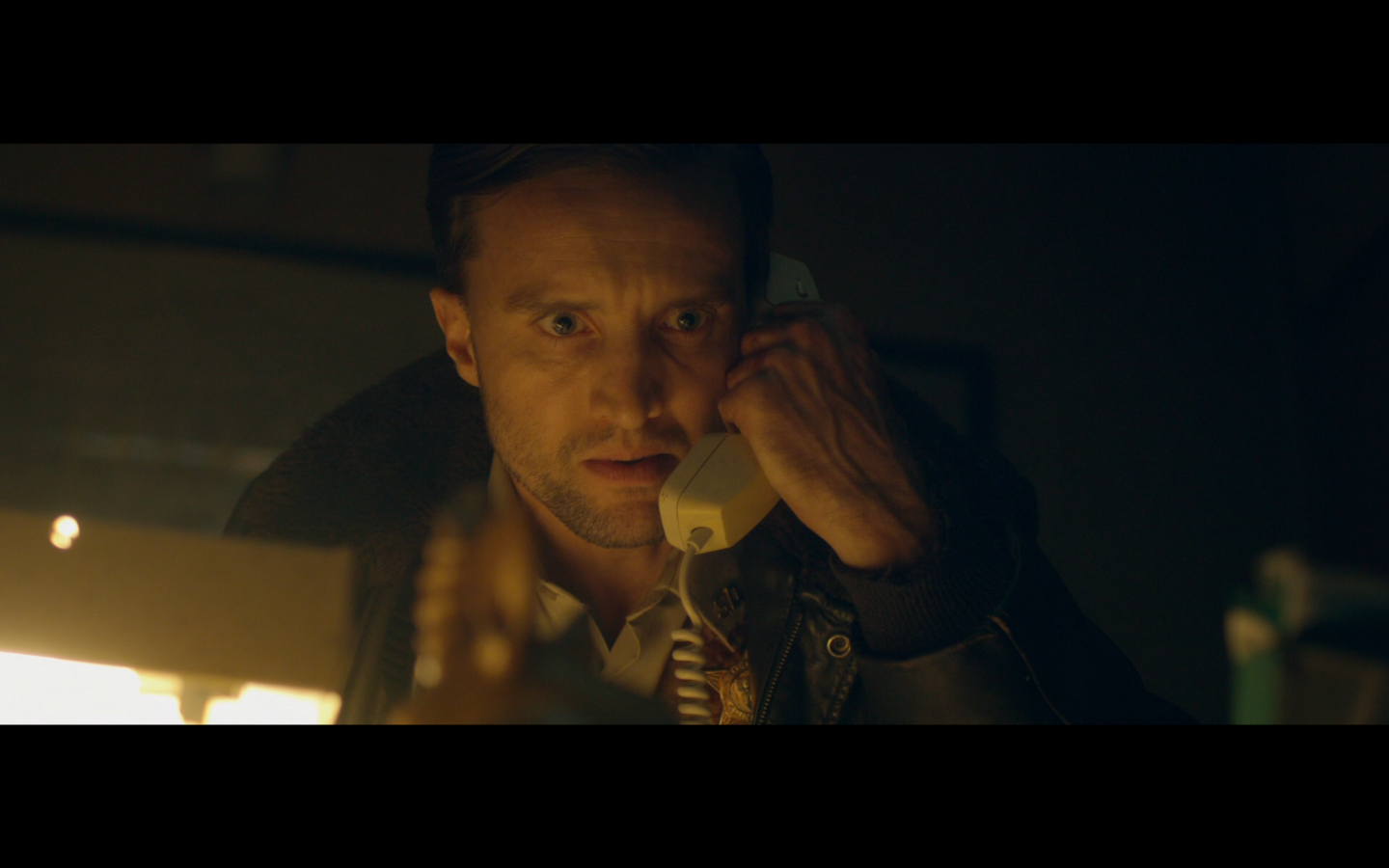 Screen Media delivers The Void to high definition home video with two audio tracks to select from: a standard 2.0 stereo presentation and a robust DTS-HD 5.1 surround track. The 5.1 surround is my preferred track for a variety of reasons, first and foremost being the score. The directors have assembled a large number of contributors for the film, which may sound like a recipe for disaster, but there’s good symmetry at work here. Of particular note are the contributions from ambient artist Lustmord, whose dark and sinister pieces contribute mightily to the success of the film’s visuals. The surround mix is very strong, utilizing the full range with a particular affinity for the lower end of the spectrum, your subwoofer is going to love this one. Dialog is clear and definitely rises above the score. 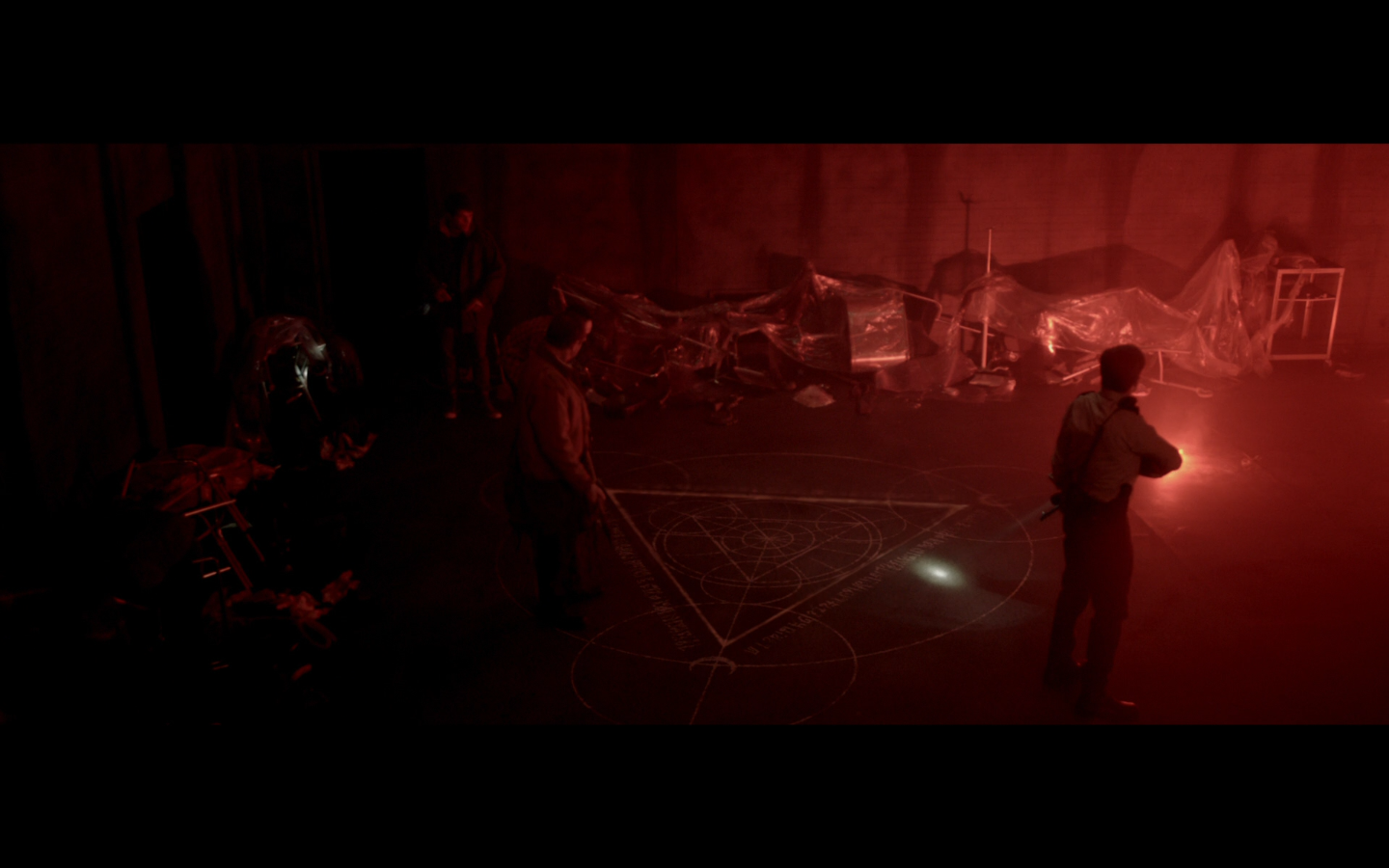 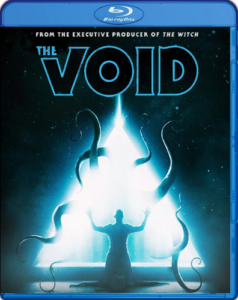 This is where this release takes a hit: the bonus features. The Void comes packaged in a basic Blu-ray case with the theatrical release poster’s artwork with a blank reverse. Inside, the disc is alone. The disc itself comes with two audio commentaries: one from directors Jeremy Gillespie and Steven Kostanski and a second from the visual effects team that put together the film’s creature work. In addition, a brief “making of” documentary is included. Both the SFX commentary track and documentary are exclusive to the Blu-ray release of the film, which is available in North America exclusively from DiabolikDVD. From Diabolik’s database: 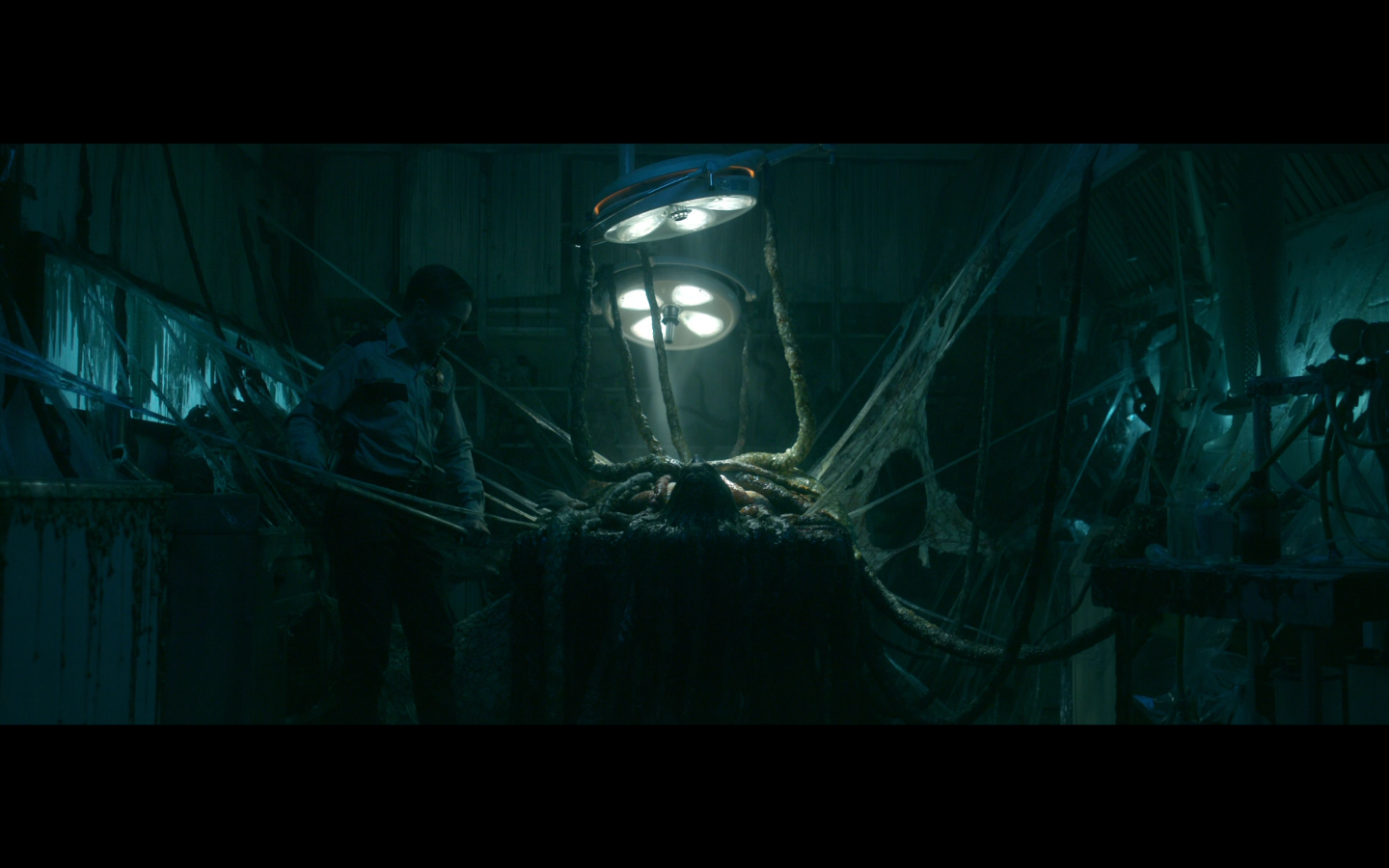 Rating: NR (would likely score an R for language, violence, and heresy) 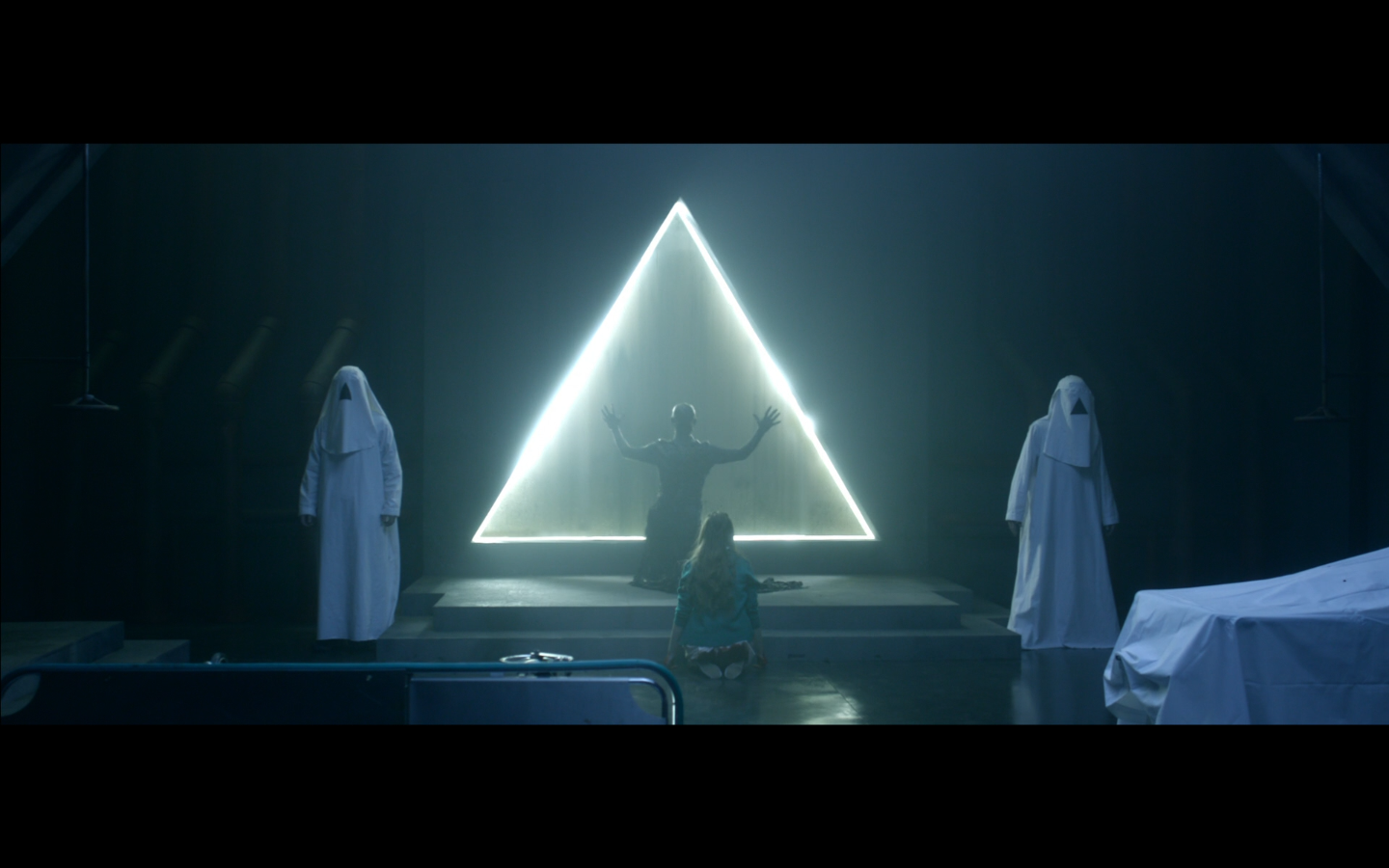 The Void succeeds where so many Lovecraftian films fail in that it manages to balance the desire to show off with the need to keep aspects of the narrative a mystery even after the film’s conclusion. What is beyond the cosmic door? Who (or what) commands these people to despicable acts? The refusal to concede any hard facts gives The Void its true power. Deftly handled by its two directors, Screen Media has brought The Void to high definition home video with a stunning and technically proficient arrival on Blu-ray. Both the audio and visual presentation do justice to the ambition of the project and the level of care and skill that went into making it. With so many horror films dedicated to the art of the jump scare, it’s a joy to see a film like The Void continue the proud tradition of going against the grain. Grab some friends and some popcorn and get ready to face the beyond.