One of the most widely available DVDs has always been Vanilla Sky. It litters the bargain bins and clearance racks at every pawn shop or used media store. This overabundance of availability has worked against this film, so it makes the timing of a new version all the more head-scratching. However, at the end of June last year, Paramount and Warner Brothers released an upgraded version, adopting the Blu-ray format.

There is a huge discrepancy between the cost of the two versions: $3.99 on DVD and $12.36, at the time of writing, on Blu-ray. Does the increase in picture quality and additional special features warrant ponying up the additional dough?  Let’s take a deeper look…

On the surface, and certainly through the early stages of the film, it has all the hallmarks of a run-of-the-mill rom-com featuring the tried and true Tom Cruise (you know the one: crass, arrogant, unwavering man who ironically discovers the errors of his ways in the course of 100 minutes, only to become a great man and a greater lover. Think Days of Thunder and Rain Man.) Even during this seemingly bumpy start, there is something amiss: something more going on subtly in the background. That is the charm and appeal of Cameron Crowe’s Vanilla Sky. 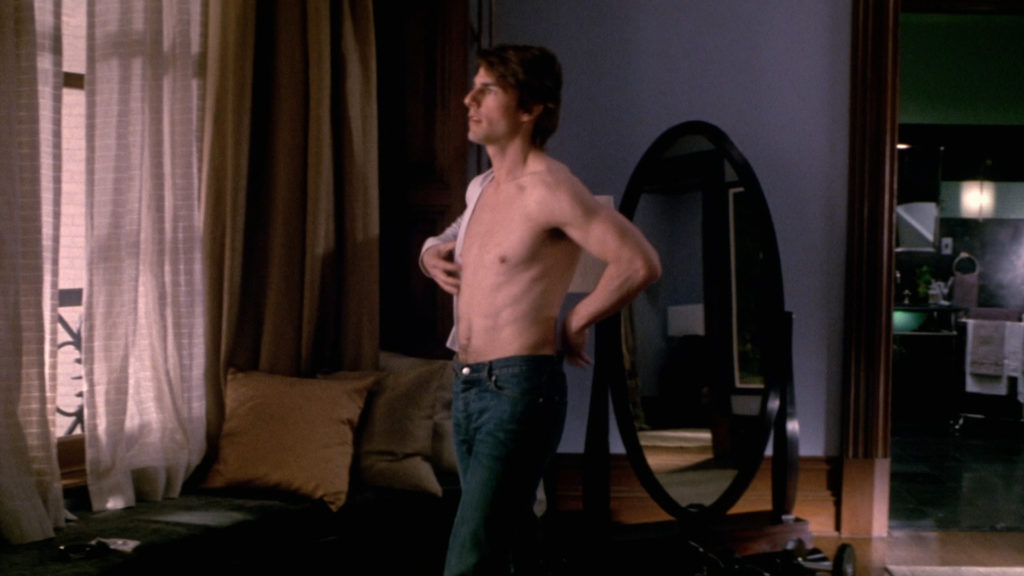 David Aames (Cruise) is the son of a deceased publishing mogul.  In the wake of his father’s death, David is given 49% control over the magazine, and his dad established a board of directors to run the other 51%. This leaves David feeling like he is still that little boy skating down the hallways years earlier. On the romantic front, David continues along this path of arrested development. Taking great joy in getting the woman more emotionally invested than himself, David is able to manipulate the woman and circumvent his own emotions. He evaluates relationships on a win-lose basis, with victory coming only when, in frustration, the woman throws herself at David, both emotionally and sexually. 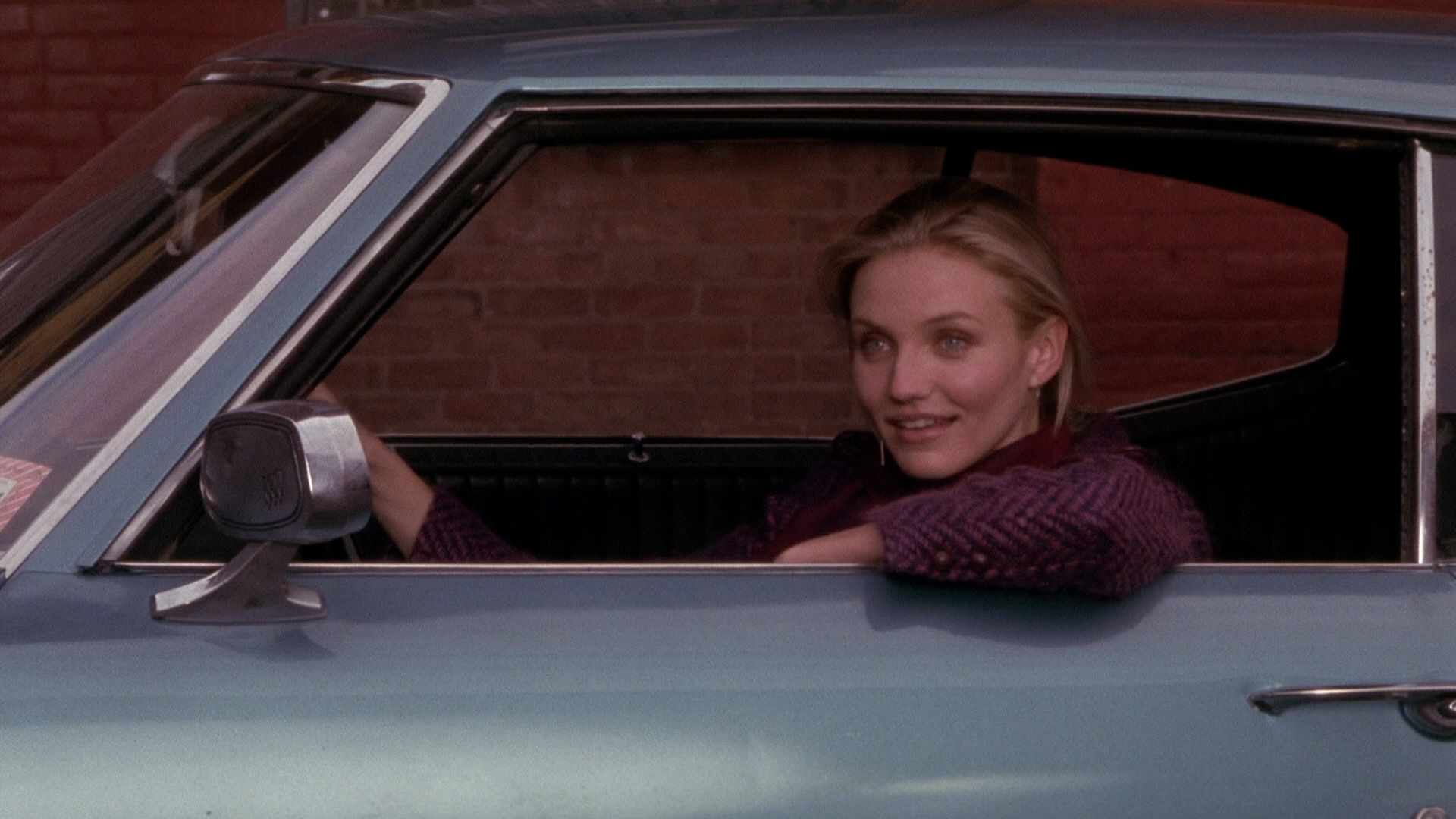 When the film opens, David is in a “friends with benefits” relationship with Julie Gianni (Cameron Diaz). There are great parallels between Julie and David. Seemingly, they are using each other to fill a void: Julie’s emotional and David’s sexual.  It is quite obvious: these two are merely propping up the other one. In atypical form, Tom Cruise plays David Aames as a very flawed man, and he remains flawed until the revealing ending. One whose weaknesses are just under the surface. David makes many head-scratching decisions which causes his life, already on the skids, to spiral completely out of control.  Prior to that, David meets what he perceives as the love of his life, Sofia (Penelope Cruz). The on-screen chemistry between Cruz and Cruise (hey!) is almost palpable. Overall, the acting was well above average. The actors had their characters nuanced enough that the viewer is able to feel almost omniscient, gathering meaning and intent through vocal changes or slight facial expressions.

One of the most satisfying elements of Vanilla Sky is the subtlety.  Director Cameron Crowe makes many references and homages in the film’s 136 minute run-time, too many to mention and probably too many to even quantify.  These references and homages are usually very clunky or heavy-handed and almost take the viewer out of the current film. David’s “floating” television is playing Billy Wilder’s Sabrina, as it descends into the floor. Later, Crowe draws again from Wilder and Hepburn casually referencing Love in the Afternoon. Typically, whether clunky or not, it does undermine the current film; however, in these two cases, the director is basically reassuring viewers that they gut feeling on a scene or relationship is correct.  As with the pair of Wilder and Hepburn homages, Crowe re-iterates that David dreams of a “storybook romance” and believes he has found it with Sofia. 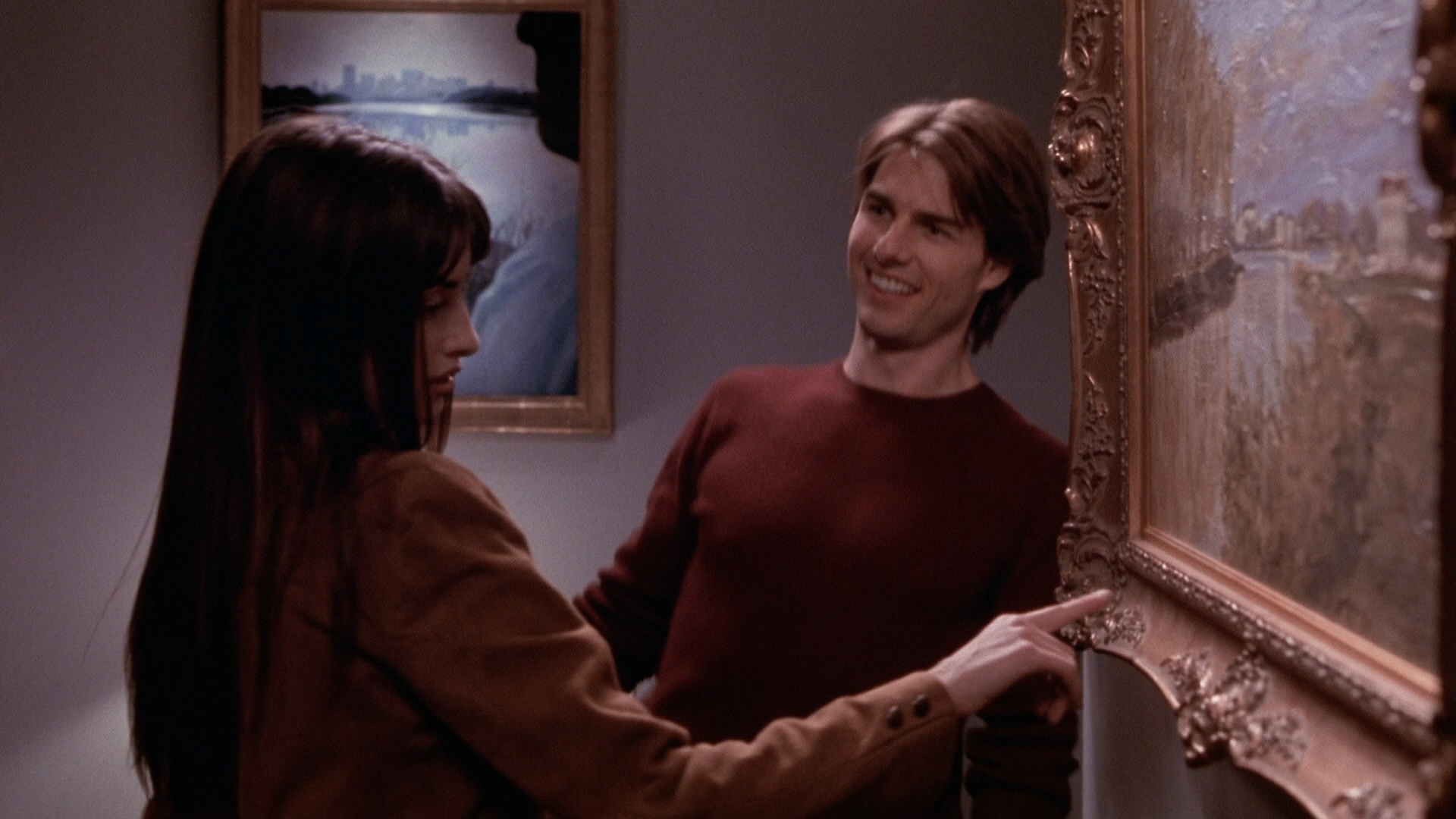 There is an almost effortless feel to the cinematography and mise en scène. Take the screenshot below: David on the dance floor at club with Sofia and Brian (Jason Lee). David has been urged by both Sofia and Brian to take the “prosthetic shield” off, as it is freaking them out. He is unable to, so he flips it back.  In this shot, the viewer sees the two halves of David, seemingly fighting for possession. The deformed face is looking forward, as it is David’s future. The mask is a representation of the shield he used to convince everyone, even himself, that he was perfect and had it all together. There is a great event from this past, the radiating strobe light, that is drawing David’s attention, which is why his future, in front of him, is so small in comparison to his past, behind him. The viewer has a a clear idea what will motivate David and where his attention is. All of this information came from just a single frame or 1/24th of a second.

All of these puzzle pieces set Vanilla Sky up for one of the most memorable endings of the thriller genre. Vanilla Sky addresses love and lust, fear and happiness, “the sour and the sweet”, as well as reality and imagination. The ending rewards, in spades, the observant viewer and will spark deep conversation with the other members of the viewing party. Vanilla Sky is quite underrated and is destined to become a classic.

Vanilla Sky has many gripping visual scenes, and the special effects are few and far between.  For this reason, visually, it has held up well in the fifteen years since its release. However, comparing the DVD and Blu-ray versions, one will not see a marked increase in picture quality. Expect considerable film grain and soft edges from the single 50GB Blu-ray disc.

The Blu-ray boasts DTS-Master Audio featuring Dolby Digital.  This is great and all, but Vanilla Sky is not a film that makes the most out of this. There is considerable music throughout the film, but it is relegated to the background on all but one occasion. In that one exception, the Beach Boys song shows its age and lack of dynamic range. This is no slight against the film, but audio is a second-class citizen to the visual onslaught. The soundtrack is an eclectic blend of then-modern alternative rock with a sprinkling of older classics.  Paul McCartney’s title track got an Oscar nomination for original song, but the Academy sided with Paul Newman and his work on Monsters, Inc.

New on Blu-ray, Director Cameron Crowe and Music Supervisor Nancy Wilson provide the film’s commentary.  It is exhaustive in detail, and it provides insight both into the world in front of and behind the camera. There is a self-serving bit showing the actors and crew promoting the film globally. There is nothing of value here. A major selling point of the Blu-ray was the inclusion of an alternate ending and twelve additional scenes left on the cutting room floor. Crowe provides his commentary on these additional scenes.  These scenes provide a fuller picture of some of the finer points glossed over in the theatrical version.  They are by no means necessary, but they are certainly interesting, though probably only for fans.  Avoid these special features if you have not seen the film at least twice. I think you will have too many questions and seek the special features to answer them, but they cannot answer them as well as an additional viewing.  The alternate ending that is prominently advertised on the case is merely a deeper, extended version of the same ending.  If anything, the alternate ending bores or insults the viewer, spelling out slowly what is happening. The director and editor made the correct decision when they selected the original ending. A ho-hum gag reel and few interviews are not worth a single view and add no value. The Blu-ray version is just that: a single 50GB Blu-ray, no DVD, no digital copy. 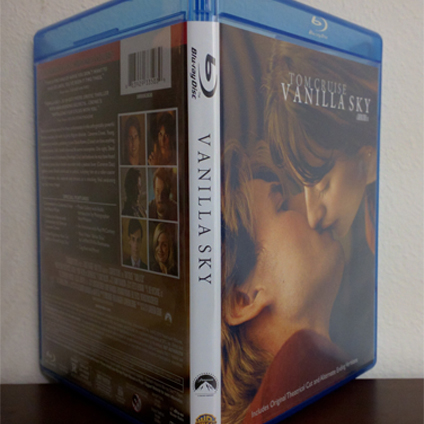 There is a great cinematic experience to be had with Vanilla Sky. It is an emotional journey. The film is both must-watch and must-own. The biggest concern here is whether the Blu-ray version is worth the asking price over its DVD counterpart. I cannot answer that for every individual, but I definitely think that it is a film worthy of a spot in any and every collection. If you are a Blu-ray collector, add it your wish list, but you would be wise to wait for a sale or other price break. If you collect both DVDs and Blu-rays, realize that Vanilla Sky’s true value is in the film itself, not in the special features. There is no definitive answer with regards to one format over the other: the choice is your wallet’s.