Unsane is a 2018 American psychological horror film that was shot, edited and directed by Steven Soderbergh and written by Jonathan Bernstein and James Greer. The film stars Claire Foy, Joshua Leonard, Jay Pharoah, Juno Temple, Aimee Mullins, and Amy Irving, and follows a woman who is confined to a mental institution after she has been pursued by a stalker. The film was shot entirely on an iPhone 7 Plus.

Following Sawyer Valentini; she is a troubled bank analyst who has recently started a new job in a completely new city to escape the trauma that she experienced from being stalked. After she brings a man home from an internet hookup app, she is triggered by the encounter to her memories of the stalking and looks up a counselor to talk things over with. During her discussions with the counselor, she confesses to sometimes having contemplated suicide. She unknowingly signs documents committing herself to spend 24 hours in the hospitals psychiatric ward.

Unsane had its world premiere at the Berlin International Film Festival known as Berlinale on February 21, 2018, and was theatrically released in the United States on March 23, 2018, by Bleecker Street and Soderbergh’s production company Fingerprint Releasing.

Giving its viewers a feeling that’s similar to that of a B-movie while touching various aspects that are common to psychological thrillers, Unsane offers a unique experience that has yet to be matched. The overall tension among the characters help to keep the audience engaged, Soderbergh’s experiment with this film is not only one of a kind, but is one that I feel should be considered to be a success. The plot line is one that immediately draws you in, and keeps your attention through to the end. There’s a significant amount of moments where you say “holy shit” to yourself, and there are a lot of things that if you aren’t paying attention to, you’re certainly going to miss. 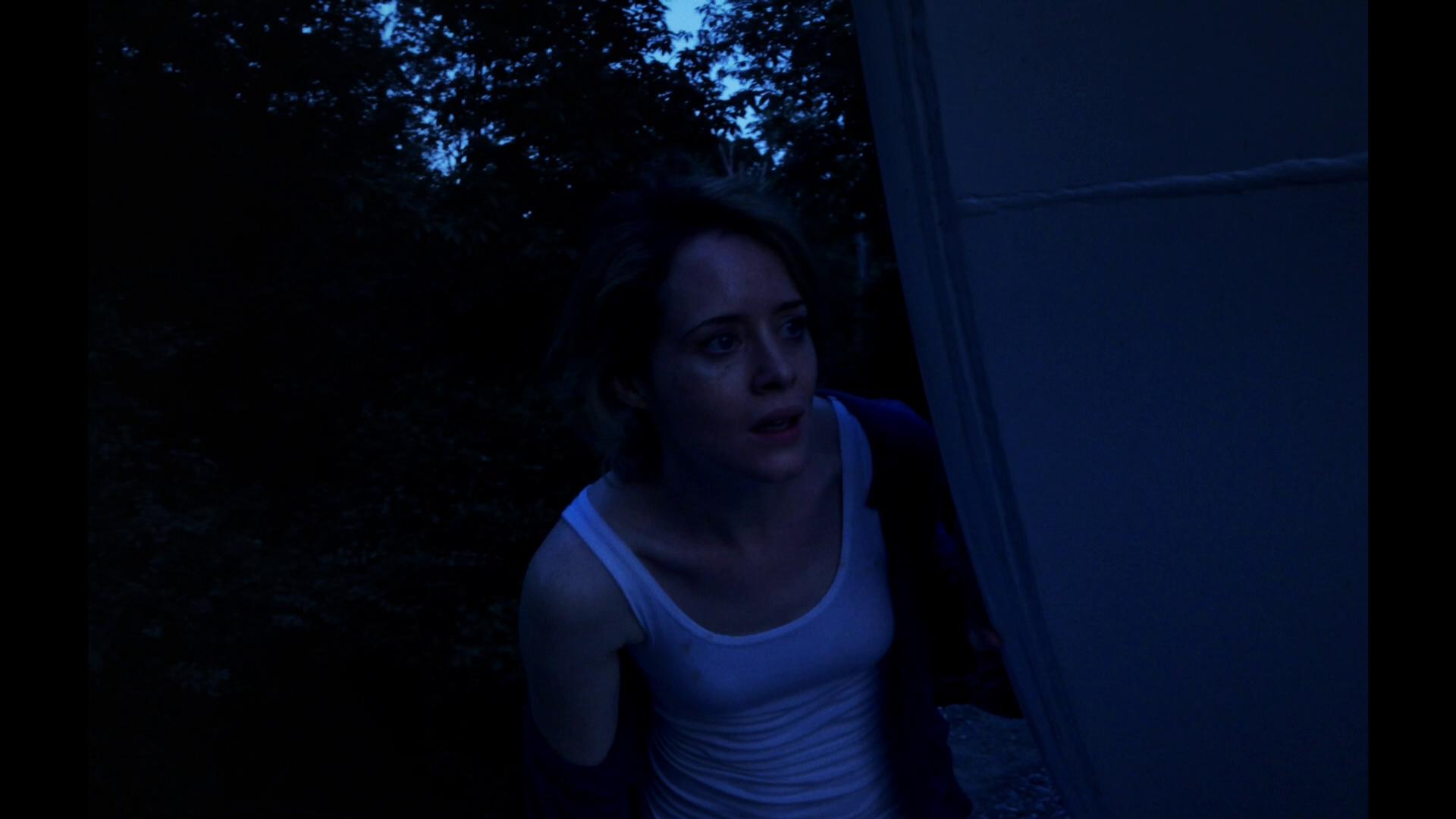 Presented in a native 4k presentation, and the fact that Unsane was filmed using a series of iPhone 7 Plus’, the overall natural feeling of this release allows for the entire experience of this film to feel all that more personal, as if it were one of your friends sitting with you sharing something from their phone.  The environmental elements of the outdoor scenery really stood out visually with this movie, as you could see and appreciate not only the grain of the gravel in a trail, but the beautiful scenery of the various wooded areas. 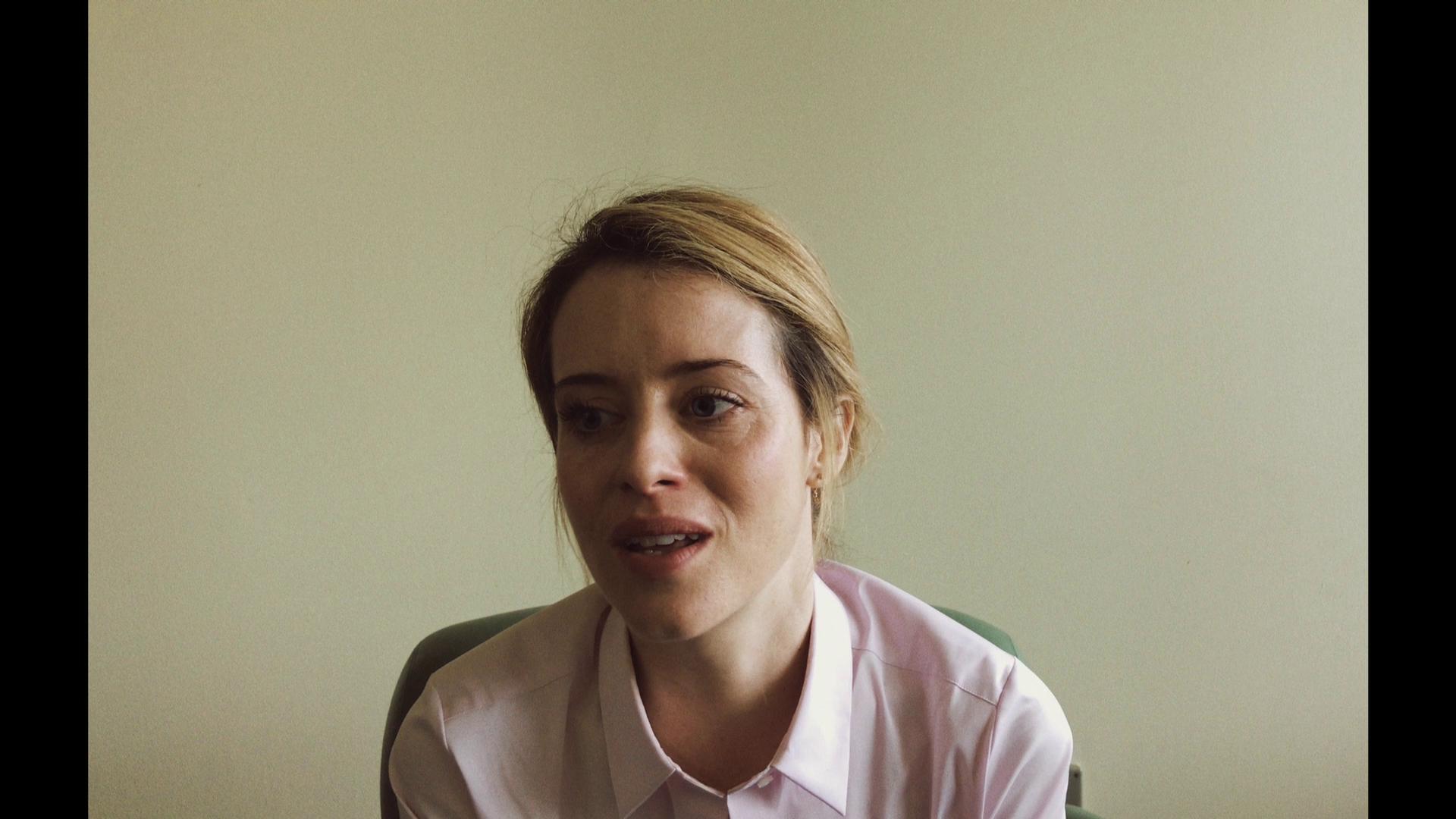 Packaged with a DTS-HD Master Audio 5.1 audio track, I normally would give some grief because it’s not as immersive as it could have been considering the format.  However, the power behind the audio mix with Unsane does an absolutely perfect job at engulfing its viewers right into the middle of everything, and providing an intense, and overall questionable experience as they try to exactly figure out what’s going on with Sawyer and the person she’s claiming is stalking her.  The bass track did a significant number with emphasizing the seriousness of what was playing out, and the dialogue was spoken clearly and allowed for everyone to be heard without the need to adjust the levels throughout. 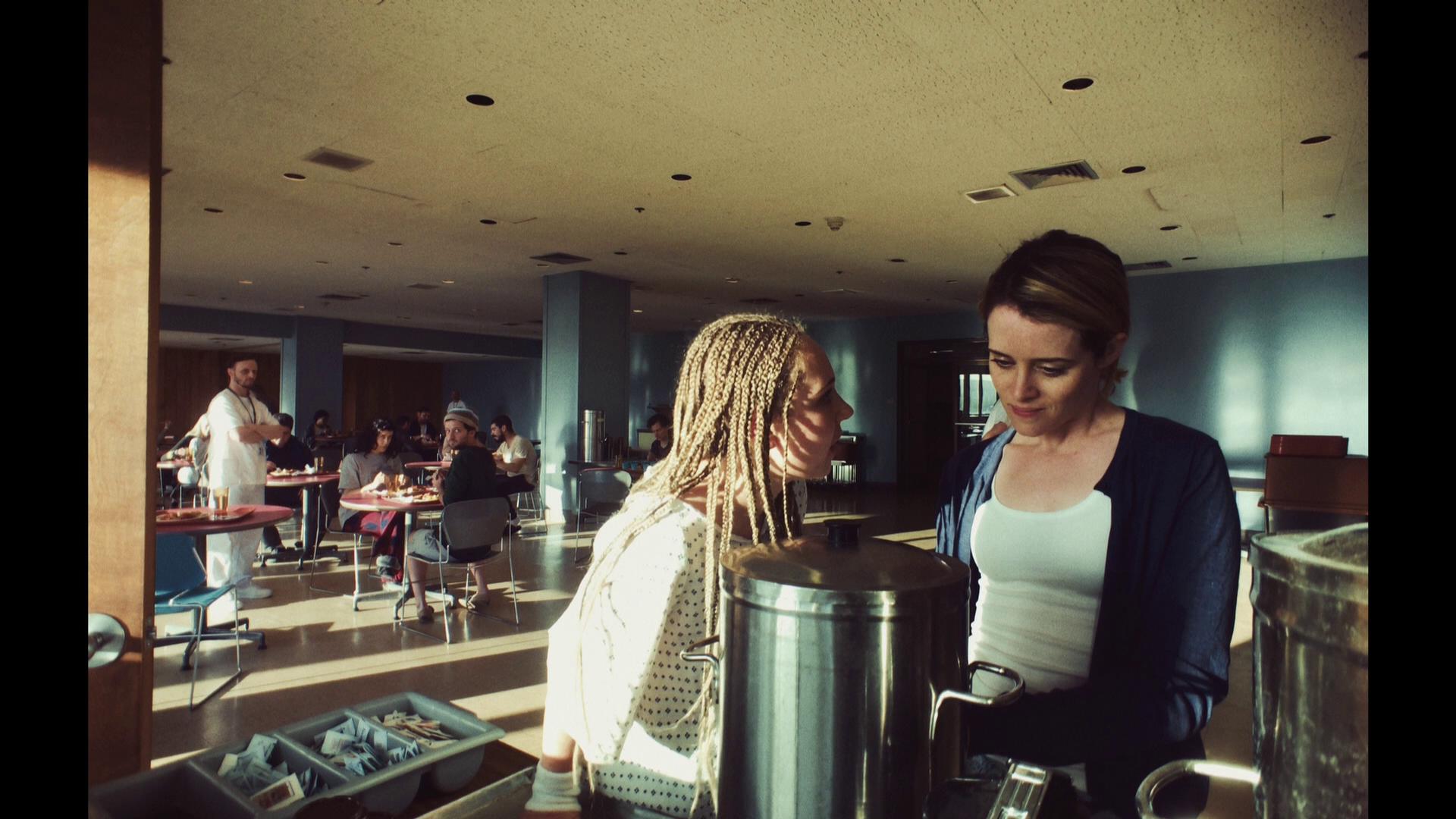 The 4K UHD release of Unsane comes bundled in your standard two-disc 4K UHD amaray case.  Within that case is the standard 4K UHD copy of the movie as well as the standard Blu-ray copy.  The UHD disc does feature a piece of artwork that matches that of the case art while the Blu-ray disc only bears the standard release text and generically solid colored background.  There is also a digital copy redemption pamphlet that’s been included for the various streaming options as well as a slipcover that’s been made available during the initial pressing that features the same piece of artwork that’s available on the case art. 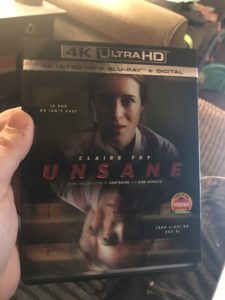 There’s only one special feature included on this release of Unsane.  That said, the content that’s been provided offers a decent look into the storyline and some of the work that went into making this film.  The only reason I even bothered to review this was because the feature titled Unsanity is also included on the UHD disc, but in a 4K resolution.  I would really consider this release to be barebones in terms of additional content as they really could have done a better job with making more content available. 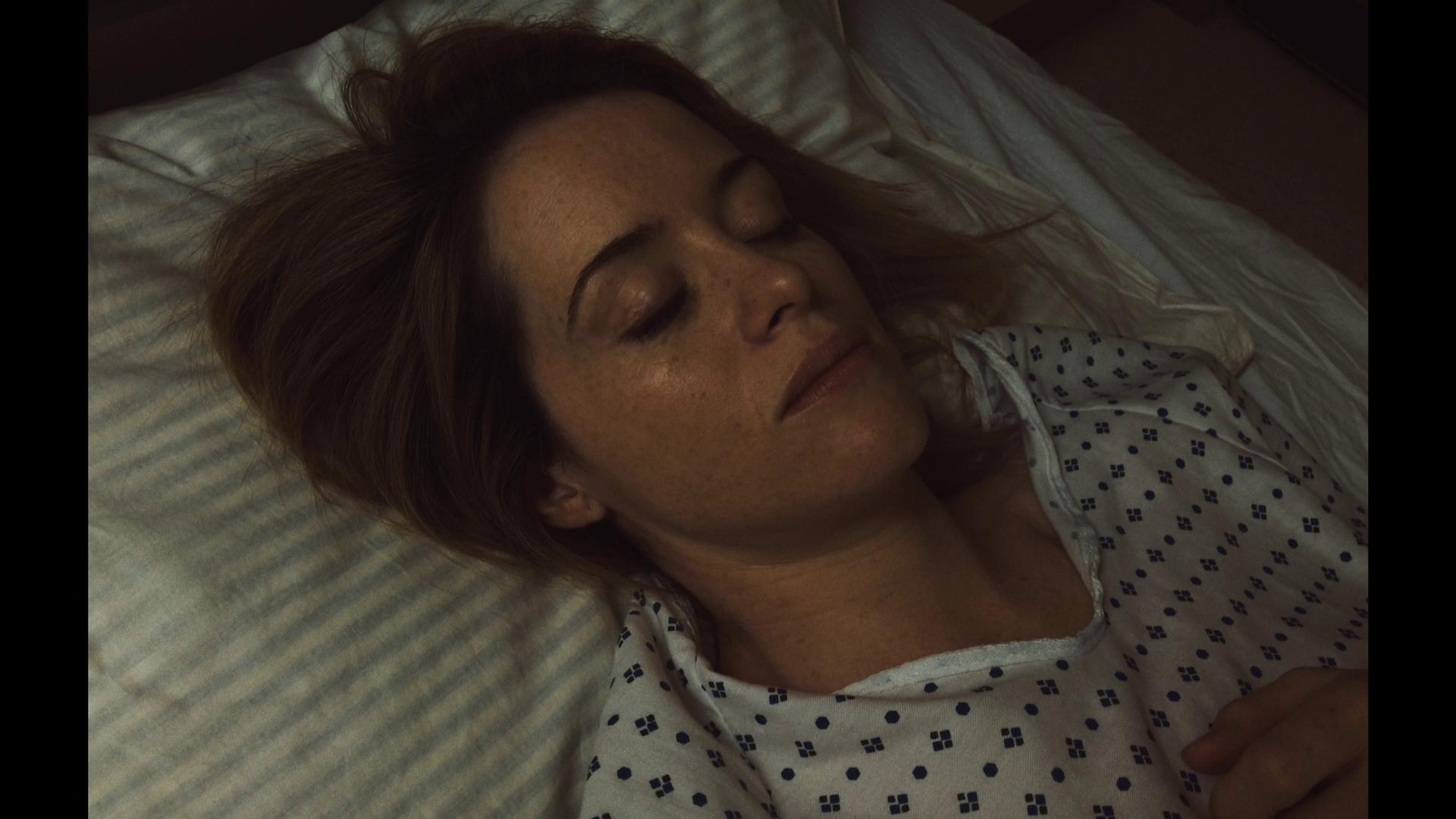 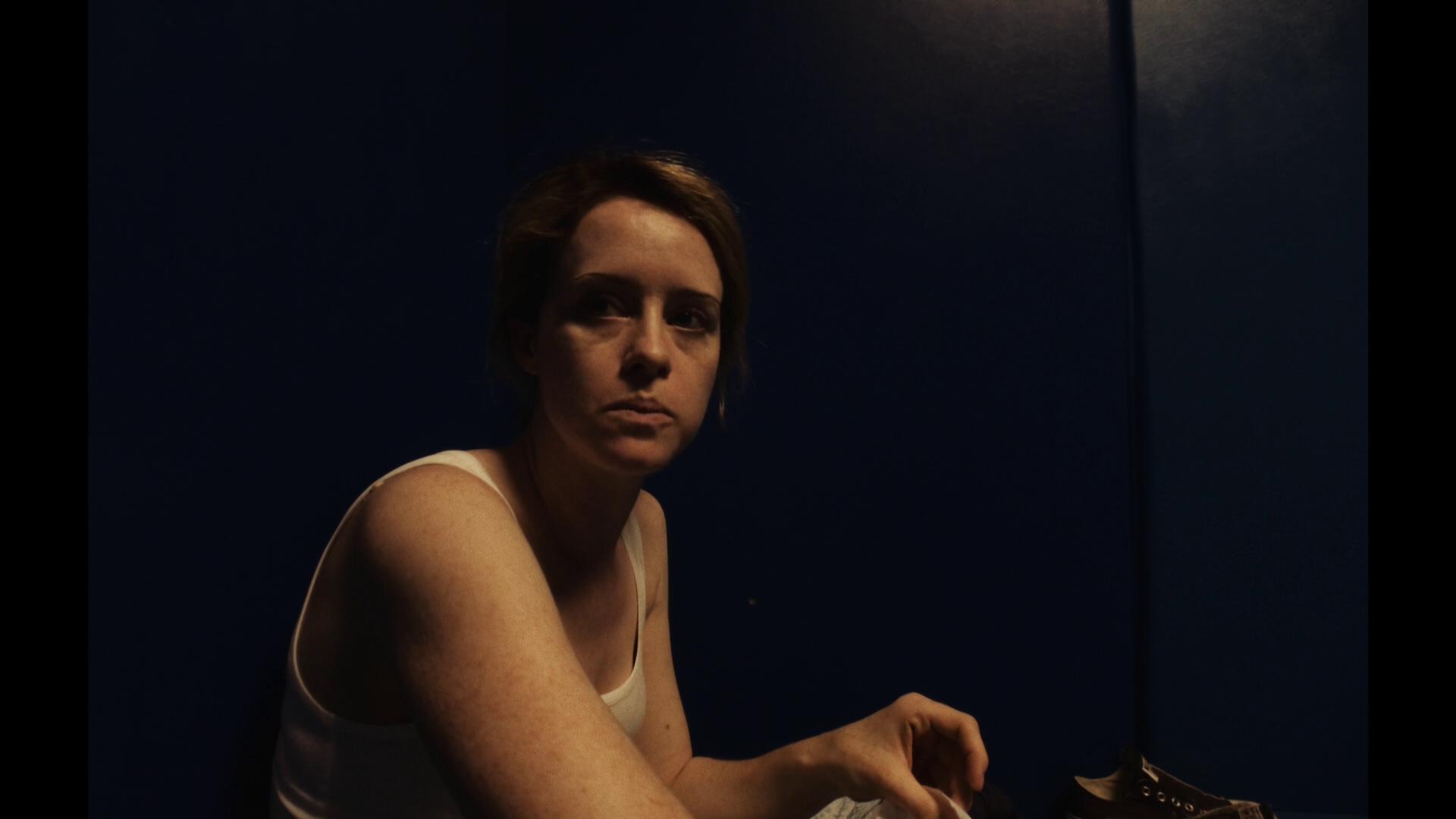 Overall, both my wife and I found Unsane to be quite the experience.  Having not seen anything promotional for this film, and only looking it up some after it arrived on our doorstep, we were definitely given an experience that was one of a kind, and one that we found to be thoroughly enjoyable.  It kept us on our toes throughout, and throughout most of it, we couldn’t help but feel some sort of empathy for Sawyer as it progressed along.  The visual and audible experience of this release were really nicely done, and are pretty stunning considering the movie was filmed on an iPhone 7 Plus.  Special features are really lacking, and should be noted as such if you’re on the fence about this release.  If you’re considering checking this movie out, I would absolutely recommend checking it out, as long as you’re not a stickler for special features or additional content.  Unsane is available on 4K UHD, Blu-ray and DVD today! 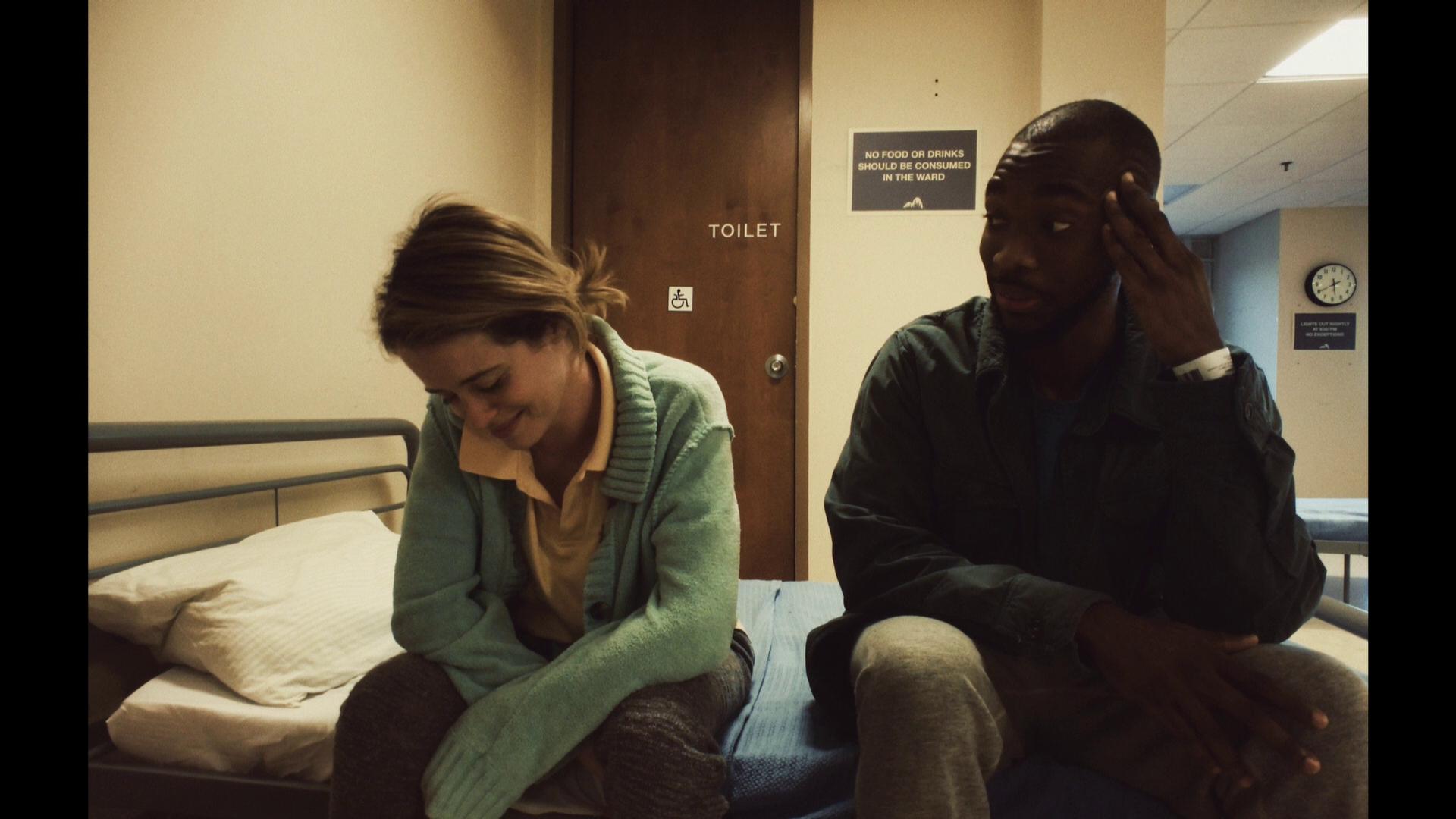