Underworld: Blood Wars is a 2016 American action horror film that was directed by Anna Foerster (as her feature film directorial debut). It is the fifth installment of the Underworld franchise and serves as a sequel to the 2012 film Underworld: Awakening. It features Kate Beckinsale reprising her role as Selene; and the cast also includes Theo James, Lara Pulver, James Faulkner and Charles Dance.

Principal photography for this film began on October 19, 2015 in Prague, Czech Republic. Initially, it was slated for an October 21, 2016 release; however there was an announcement about the release delay, the earliest release date became available was November 24, 2016 in Russia, Ukraine, Georgia and Kazakhstan, followed by a December 1, 2016 release in various countries like El Salvador and Australia followed by the US on January 6, 2017.

In North America, it was expected to gross $15-$19 million over its opening weekend. It ultimately ended up bringing in $13.7 million, which is down 49% from the previous installment and finished fourth at the box office and marking the lowest debut of the franchise. The review aggregator Rotten Tomatoes gives the film an overall approval rating of 17% based on the 78 reviews, with an average rating of 3.8/10. The sites general consensus reads that “Underworld: Blood Wars delivers another round of stylized violence that the series is known for, but — like many fifth franchise installments — offers precious little of interest to the unconverted.” Peter Travers of Rolling Stone Magazine was considerably negative in his review, writing that “scraping bottom would be a step up” for the film, and that the franchise “needs a stake through the heart.” One of the more positive reviews written by Owen Gleiberman of Variety wrote that it was “gun-blazing, body splattering business as usual”, and that the film made a “token stab at actual theatrical drama” in step for the “auction slaughter” that is “its own numbing reward”. He also praised the performances of Beckinsale, Pulver and especially, Dance.

Len Wiseman, one of the films producers has since announced that a sixth film is in development and that Kate Beckinsale will be reprising her role as Selene again. 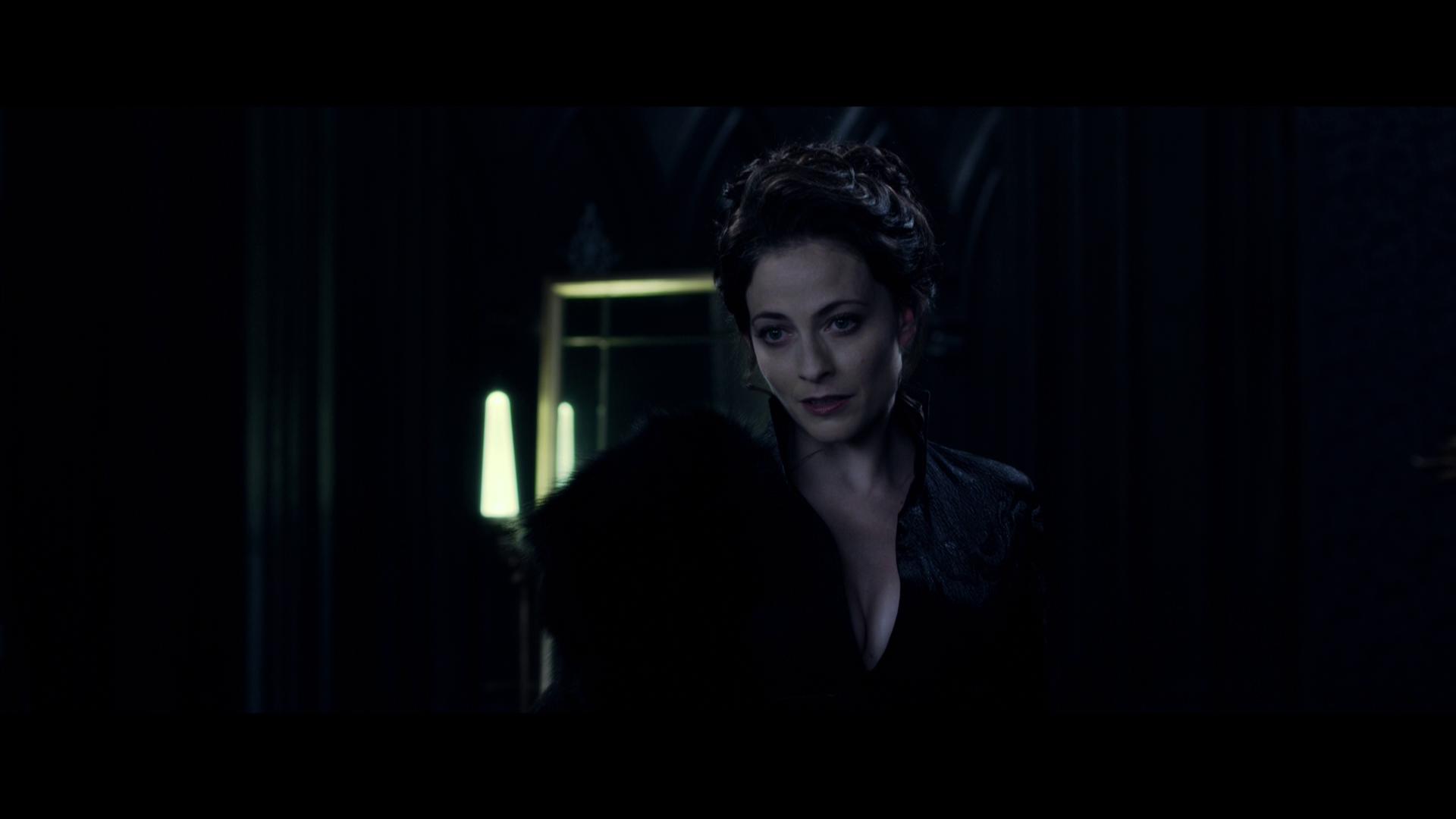 At first, when I had heard that Underworld: Blood Wars was being made, I couldn’t not share the excitement since it had been  4 years since the last film of the franchise; not to mention the sheer anticipation in the continuation of a story line that I had loved.  I’m going to be blunt, this movie didn’t quite live up to the expectations that I had.  The story was considerably bland; there wasn’t as much action or visual effects like we had seen with the previous films; and the pacing was considerably slow.  Now, with that said, it wasn’t a terrible movie; it just left myself and my wife asking for a lot more than we anticipated.  The story that we’re given does a pretty solid job at picking up after the previous film, and the story itself is very well maintained throughout.  Sure, there was some action, but not like I remember from the earlier films.  After reading the quotes that I mentioned above, I can semi-agree with both individuals to a point; and want to certainly emphasize that this film should not be watched as an introductory film into the series (anyone with any common sense would start with the first film anyway, but it needed to be said).

It is reported that Underworld: Blood Wars was shot at 6K and finished with a 4K presentation.  It is presented on the 2160p UHD format with what one would call a “Real 4K” presentation.  The movie does a solid job at its presentation, despite being a considerably dark and not very colorful film.  There is a noticeable uptick in sharpness and clarity over its Blu-ray counterpart.  While the Blu-ray’s display is great and lives up to the expectations that one would have with the format, it is definitely second-rate in terms of crispness and clarity to its UHD counterpart.  The implementation of HDR into this release helps with toning everything down.  The skin tones of the cast are more of a ghostly pale with the red lips and the red of the blood being much more “punchy” and saturated. 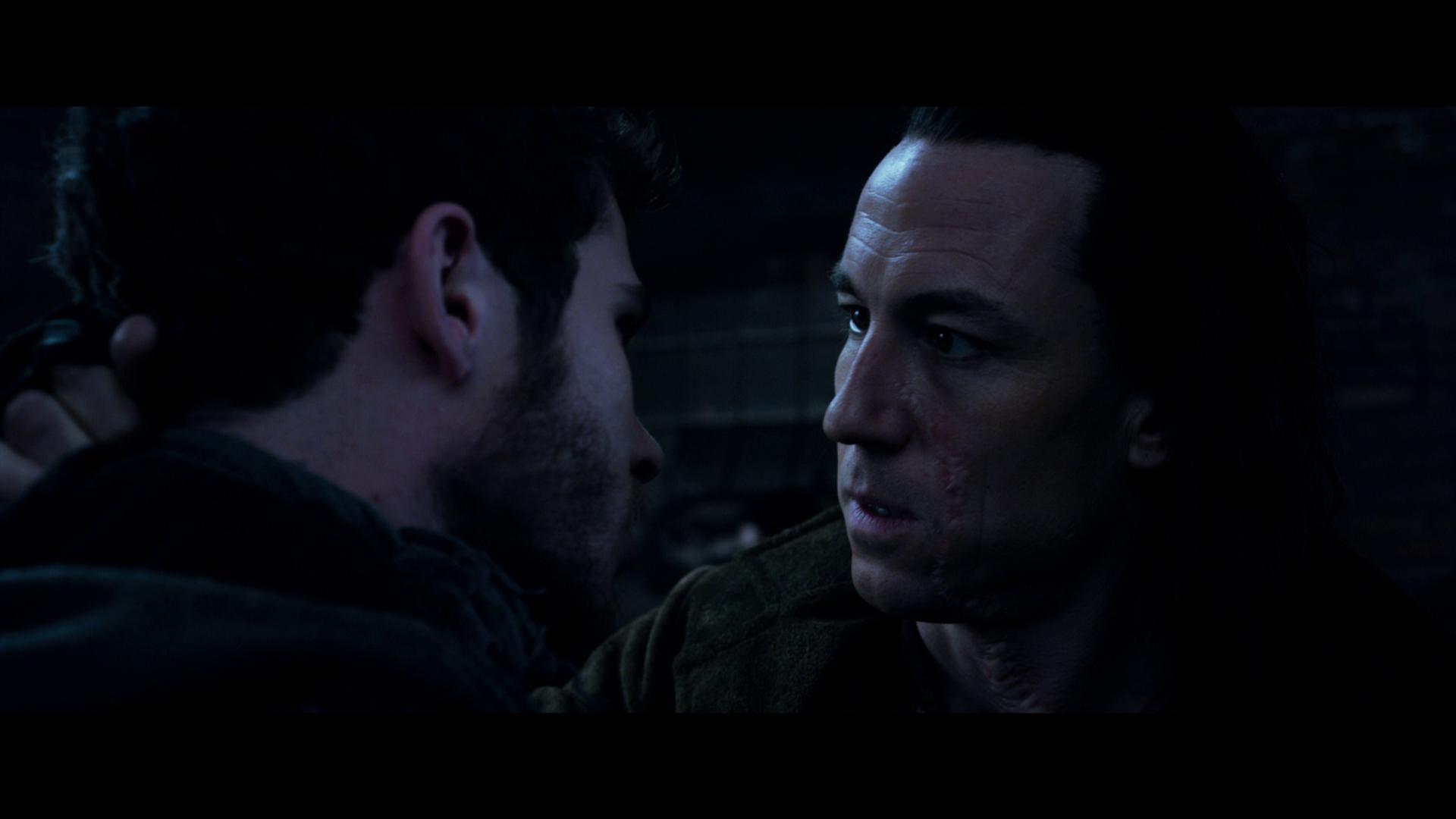 Making use of the Dolby Atmos technology and the benefits that are associated with it, Underworld: Blood Wars sounded absolutely beautiful as it played out through my home theater system.  The audio track that’s included on the UHD basically takes everything that’s great about a 5.1 audio track and enhances it so that everything feels larger, wider and much more full.  The sense of space with this film is considerably increased, and it doesn’t take much time to recognize it.  There was absolutely no distortion to the included audio track; my wife and I were able to hear and understand absolutely everything about this film as we watched it last night. 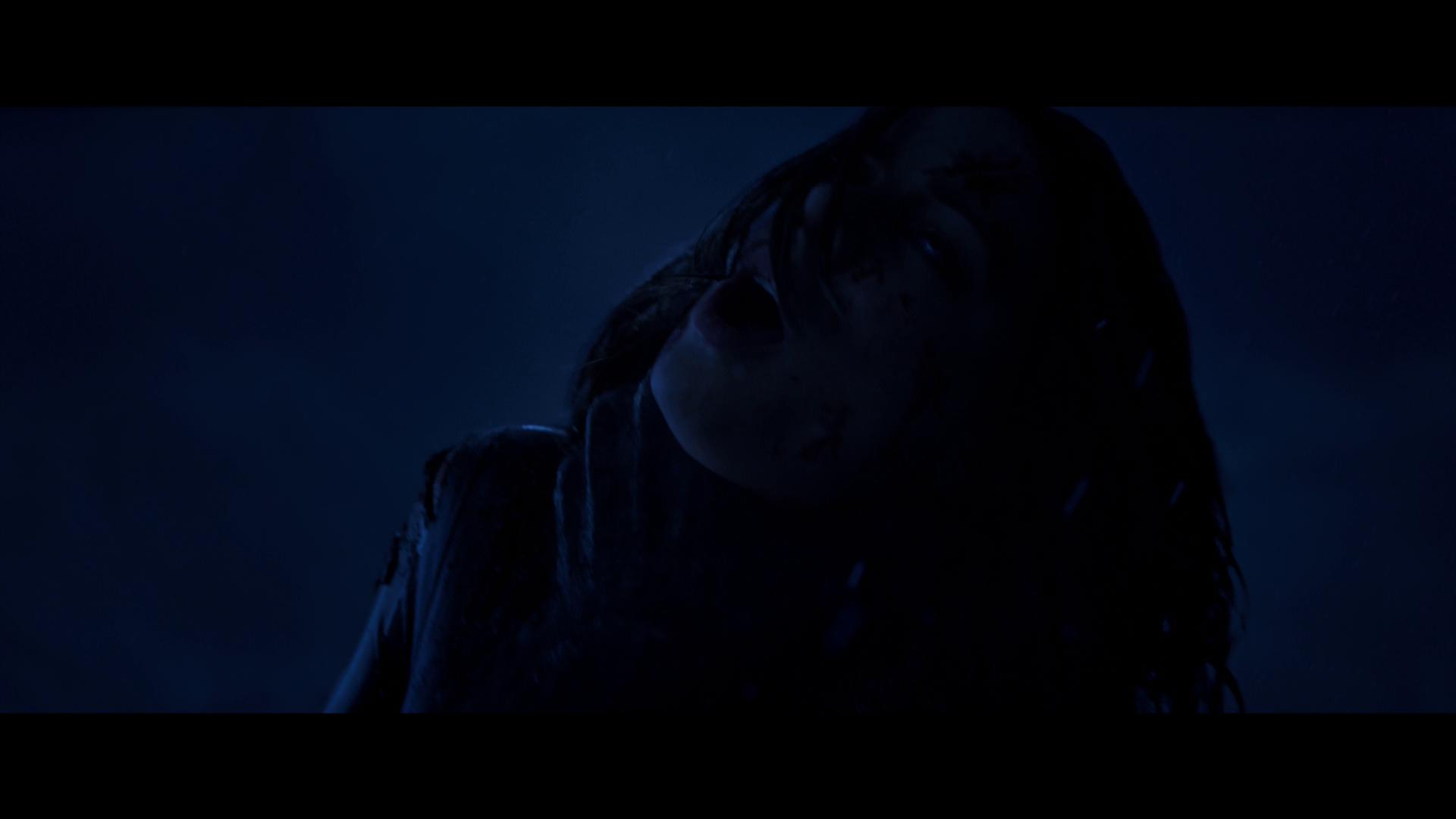 Underworld: Blood Wars comes packaged in your standard 4K UHD Blu-ray amaray case.  Contained within that case is the standard 4K UHD copy of the film, the standard Blu-ray copy of the film as well as the digital copy redemption pamphlet for on the go streaming.  The discs don’t really feature any artwork whatsoever and are rather generic.  There is a slipcover that’s been made available in the initial pressing of the film that features similar artwork to the amaray case. 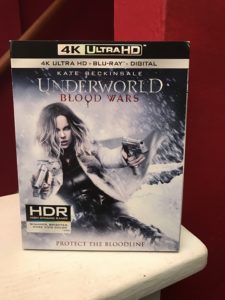 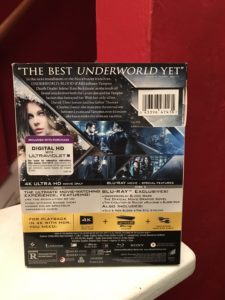 Just like most other 4K UHD releases, Underworld: Blood Wars does not include any additional content on the 4K UHD disc.  All available bonus features are made available on the included Blu-ray copy of the film.  Included with this release is: 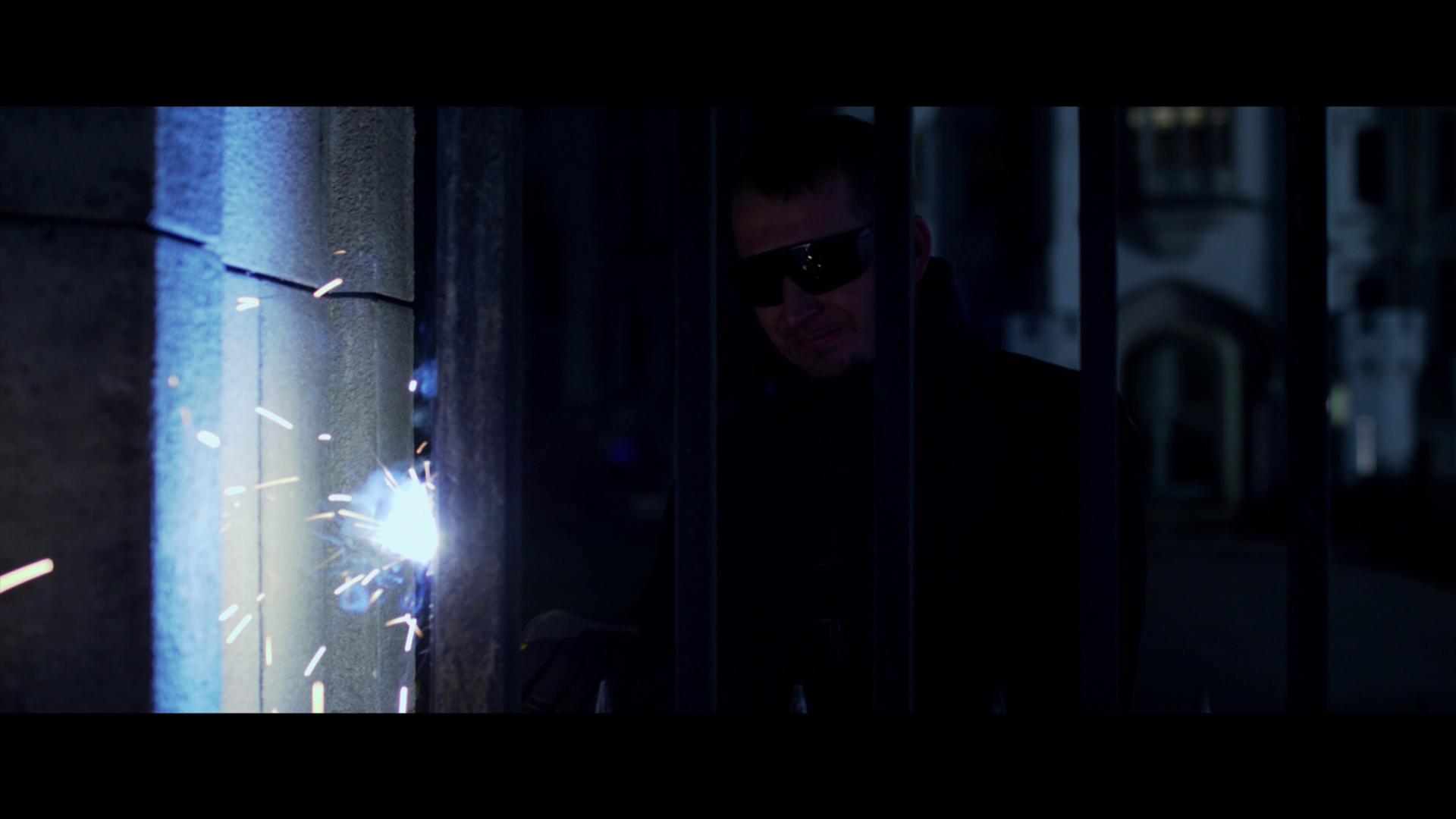 Overall, Underworld: Blood Wars wasn’t horrible.  I mean, I was rather disappointed at a few things that I mentioned above.  But considering that I’ve already seen the earlier films, and that I already had a lot of excitement going into this film, I was left feeling “okay”.  While it didn’t necessarily live up to all of the hype that I had, it still offered an extremely sharp and solid visual and audible presentation.  My wife and I were able to see, hear and completely understand everything as the story progressed on my living room television.  There is a decent amount of additional features that are included with this release that allows you to dive deeper into the production aspects of the film.  If you’ve already got the earlier films of the franchise in your collection, then Underworld: Blood Wars is definitely something you should pick up and watch.  Otherwise, go get the earlier films before you consider grabbing this. 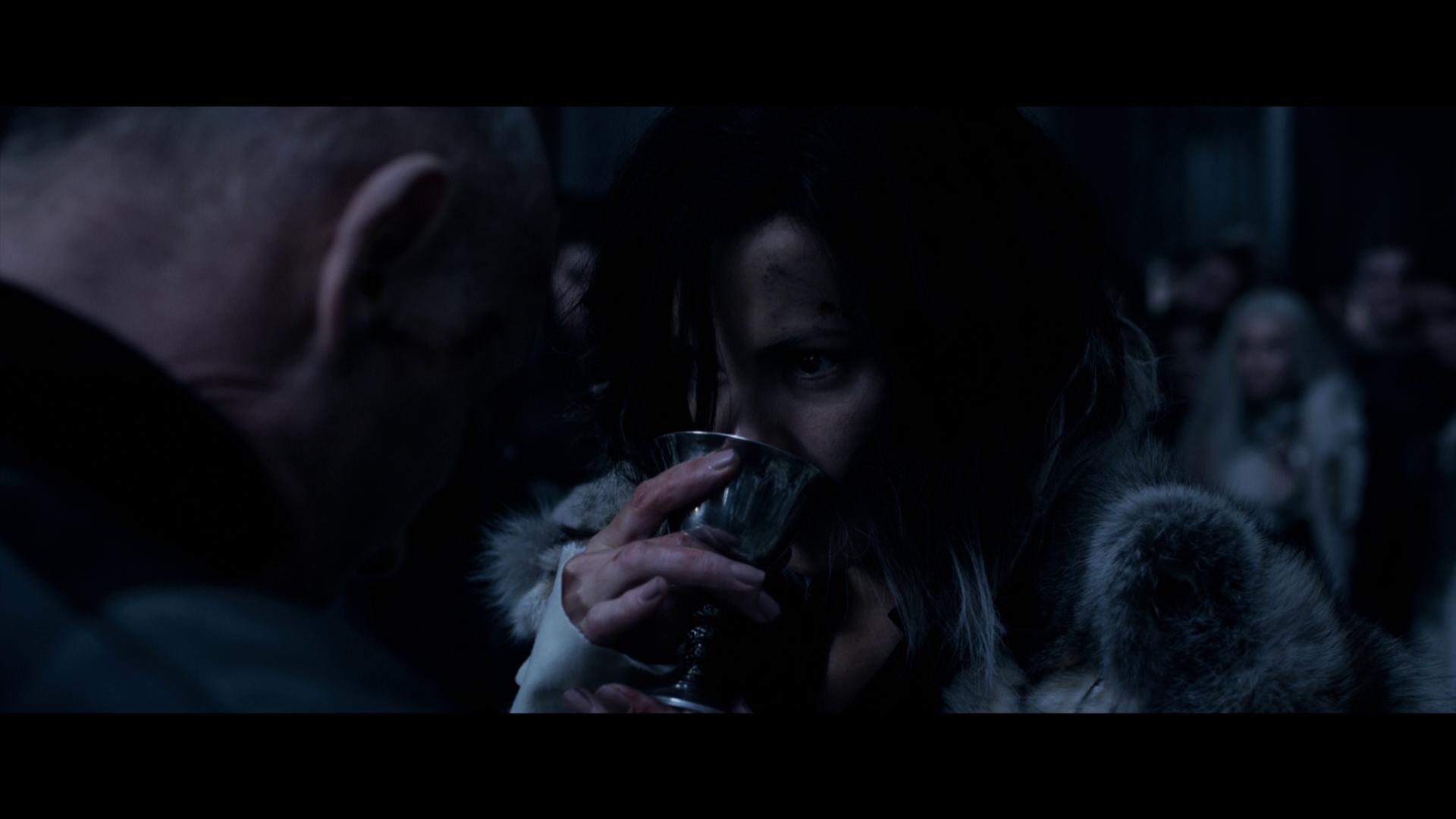