There have been countless WWII stories that have been brought to the big screen, and for good reason. Few events have affected so many lives in so many ways.  With all of those stories out there it is sometimes hard to hone in on one that stands out, but the tale of Louis Zamperini, as told in Unbroken, is definitely one like no other.

Unbroken is a true story of an Italian-American who has what has to be one of the craziest life stories I’ve ever heard.

As a young man in school, Louis Zamperini, after years of being an outcast based on his heritage, finds a talent he can grasp ahold of — running. He quickly sets records for school and state and is sent to the Olympic games as a representative of the United States.

Shortly after, Zamperini joins the Army Air Corps where he was sent on missions in WWII, including a rescue operation aboard a faulty airplane called The Green Hornet that ultimately crashes in the ocean, killing all but three of the soldiers aboard.

Ultimately, the survivors of the plane crash are caught by a passing Japanese ship and carted off to a series of POW camps, which is where the majority of this film takes place.

The core message of this story is the unbelievable life that this man had,  the extreme situations he had to face, and how he overcame each and every obstacle in his life. It’s truly a remarkable tale.

Jack O’Connell plays the part of Louis perfectly, finding a way to make you feel a myriad of emotions that I’m not quite sure I can describe. Each other person he encounters throughout the film has a story to tell, and a depth to them that leaves you wanting to know more.

Unbroken is a fantastic film that will inspire you and give you a window into the hell that POWs faced, and shows us that no obstacle is too much if you have the courage and willpower to endure.

Unbroken has a wonderful quality on blu-ray. For a film that displays a lot of tans and browns, the detail is immaculate and crystal clear. The earthy tones provide a way to show off the vibrant reds and blues that show up from time to time throughout the film. Blacks remain true and further accentuate the vibrant colors when they appear on screen.

War films like this really shine on blu-ray, where the dirt and grit can be shown in fantastic detail. Even scenes shot in the dark come across with impressive clarity.

As one would expect from a war movie, there are scenes with intense combat, gun fights, and explosions, and boy do they sound great in this film. The sound is mixed perfectly so you never miss a line of dialogue or sacrifice the satisfying booms of war.

There are four audio tracks on the disc, including Dolby Atmos and TrueHD 7.1 for English viewers, and Dolby Digital 5.1 in Spanish and French. For those who haven’t upgraded to Atmos yet, have no fear, the 7.1 channel TrueHD audio is absolutely fantastic. The channels are mixed well, giving a detailed immersion into the film. 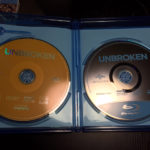 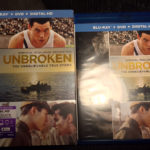 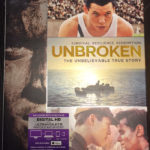 While there isn’t a lot of different items here, the documentaries are absolutely worth a watch and extremely well done.

Unbroken is a wonderful and almost unbelievable true story of a genuine hero during wartime. There’s a strong message throughout the film of enduring insurmountable odds. I cannot recommend this one enough.