Whether you were a fan of long running sitcom Malcolm in the Middle (which I personally recommend binge watching on Netflix) or the critically acclaimed triumph of the small screen Breaking Bad, it’s safe to assume that you have heard of Bryan Cranston.  However, it may surprise you to hear that Cranston’s Oscar Nominated performance in Trumbo went relatively unnoticed.  Trumbo is a film about the Hollywood blacklist in the late 1940’s and early 1950’s.  The blacklist impeded on several prominent and talented screenwriters simply because of their political views.  Cranston no doubt delivers an Oscar-Worthy performance bringing to life this absurdly eccentric screenwriter who may or may not have been single-handedly responsible for keeping good film alive during this time. Unfortunately, a good performance only goes so far as to save a film.  With Trumbo it feels as if all the pieces are there but they just don’t fit together well enough to bring to life a great film. 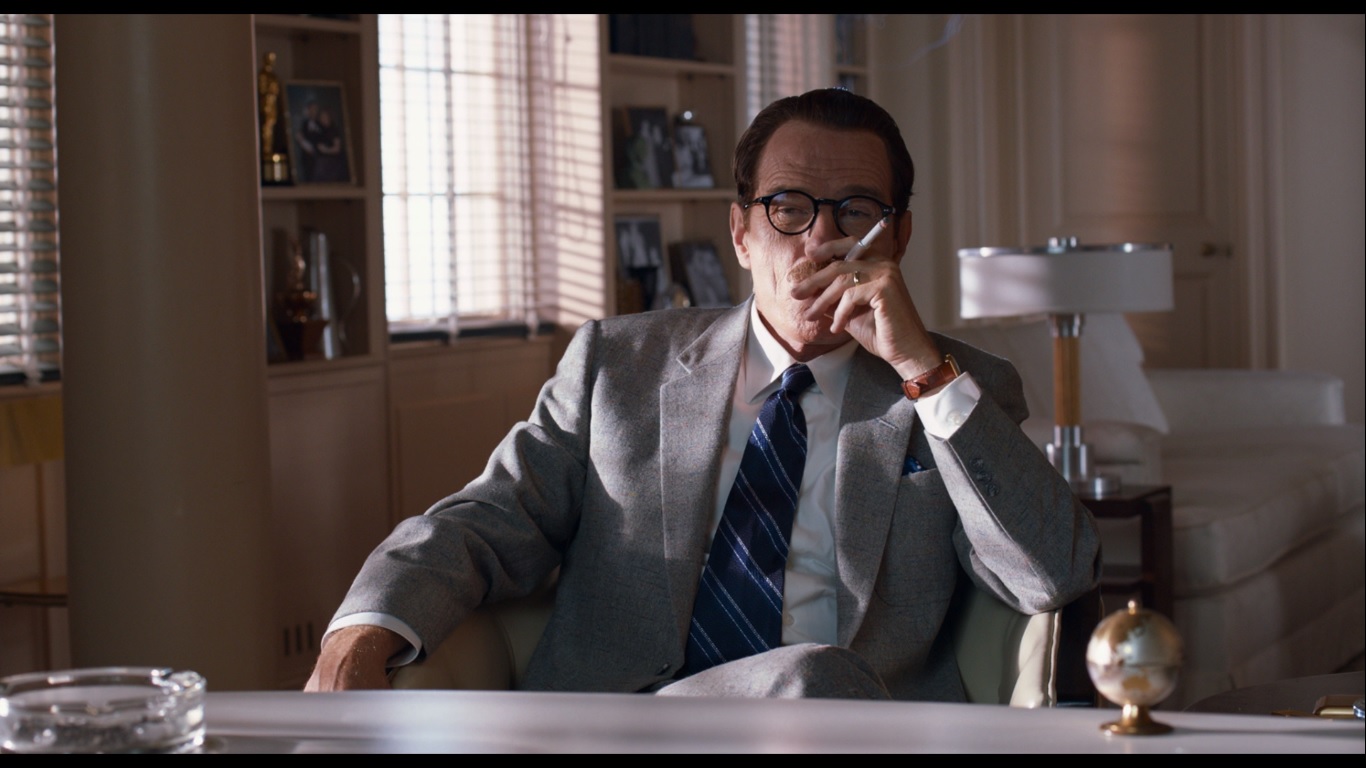 Our story follows Dalton Trumbo, an acclaimed screenwriter and outspoken communist.  At a time when fear conquered rational thought, Trumbo and his cohorts were publicly scrutinized and branded as criminals without just cause or rationale.   In 1947, many honest and uniquely talented writers found themselves out of work and some even incarcerated.  Dalton Trumbo was considered to be the face of a very distinct group of writers known as “The Hollywood 10”.  He desperately tried to keep them working by publishing their works under various pseudonyms.  Dozens of these films were made, many won prestigious awards including Roman Holiday and The Brave One both of which received Academy Awards. 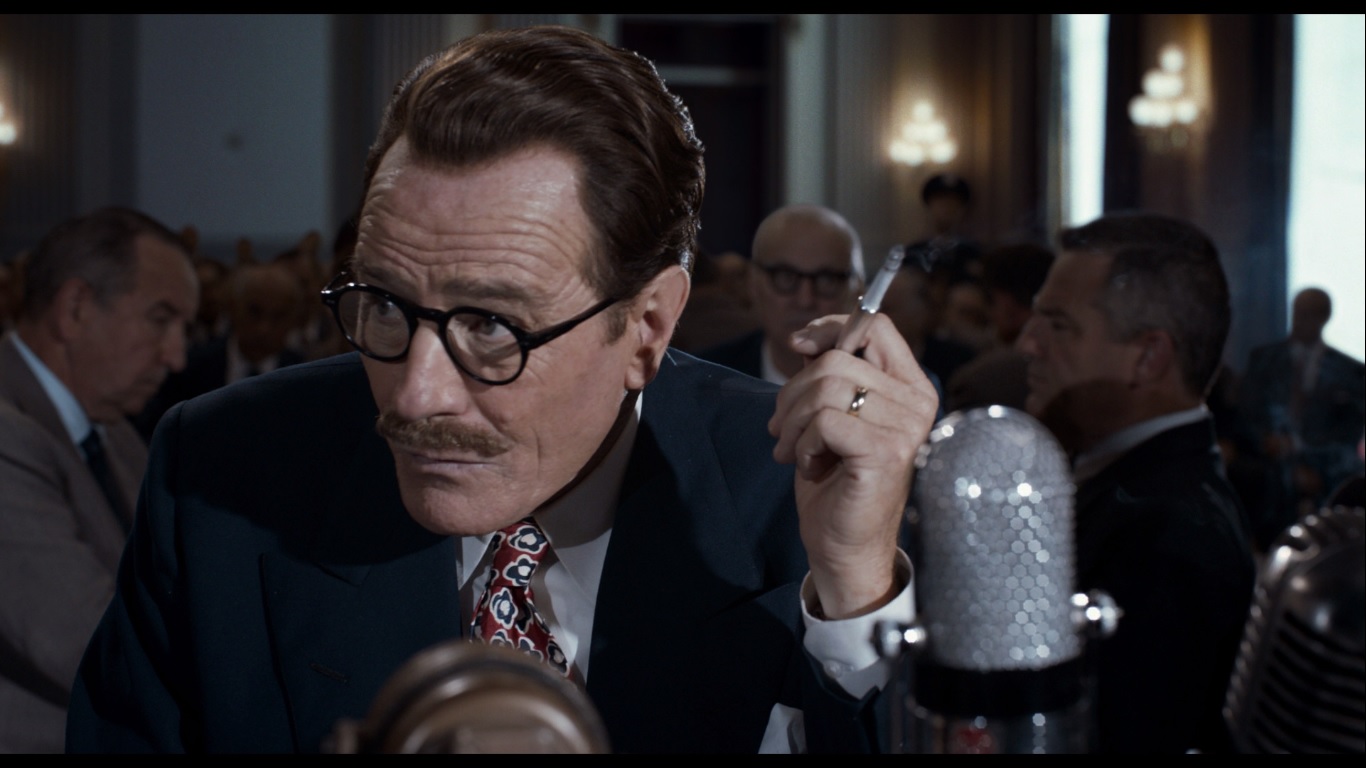 The film has a distinct and old feel to it throughout.  Director Jay Roach worked closely with Cinematographer Jim Denault to achieve an older, less modern feel to the film.  They used a combinations techniques, including the use of slightly older lenses to make certain shots appear less crisp and modern feeling.  Nonetheless we get a great sense of the time period throughout the film and keeps the story moving effortlessly. 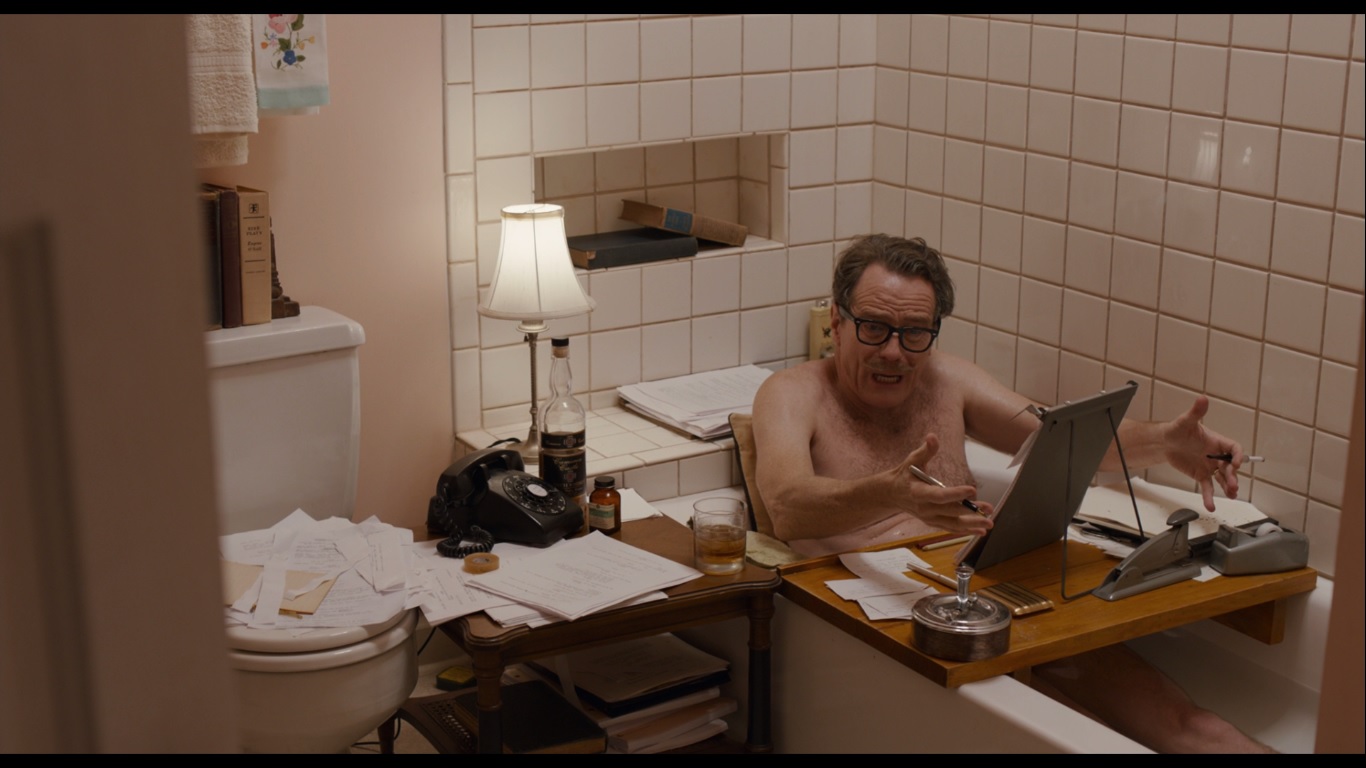 When it comes to audio, there are no grand action scenes or  extreme change in the audio levels.  Although the score is presented beautifully and oddly fitting with the tone of the film, the movie finds itself switching often between light-hearted comedy and serious drama and the soundtrack keeps true to the tone. While nothing particularly shines in the audio, it is a very serviceable and modern sounding DTS-HD Master Audio 5.1 audio presentation that is on par with any other new release.

I am not a fan of this cover art one bit.  I do not think it’s relevant enough to the story line to justify throwing the three highest paid actors/actresses on the cover.  They really should have stuck with the promotional image of Cranston sitting at the typewriter on the cover which, in my opinion, is a much cooler and more appealing image to advertise the film.

Trumbo comes with just the single Blu-ray disc, and there is no DVD included with this release. The disc is packaged in a typical one-disc Amaray case, and it is not the cheaper “Eco-case” model, which is always nice. For fans of digital copies, there is a Digital HD code which can be redeemed on either a UV service like Flixster or VUDU, or on iTunes. Early print runs will include a slipcover, as previously mentioned. 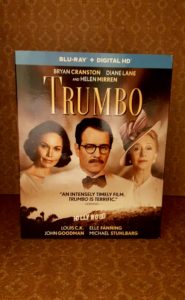 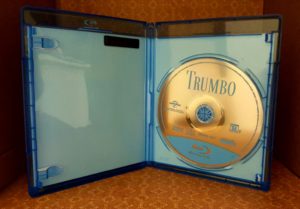 When considering the special features on this release, it’s obvious they missed the mark.  There are only two extras included and neither really do much to add to the incentive of purchase.  It feels almost as if, since Cranston did not win the Oscar, the studio did not want to put any more effort into the production of the release.  The Special Features included in this release are as follows: 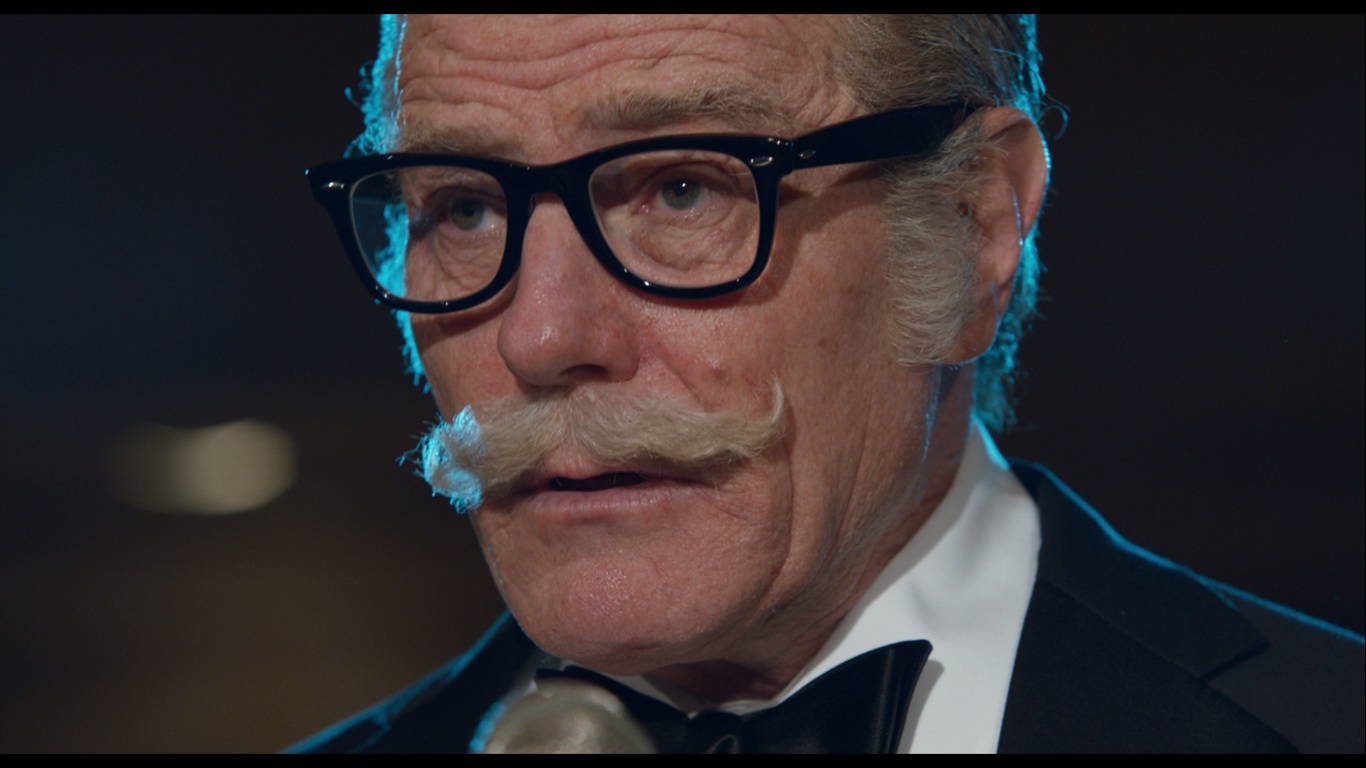 Trumbo is a vehicle.  It had everything that Cranston needed to really step out and just act his ass off.  The film itself, however, falls short in a number of ways.  It doesn’t come off compelling enough, soon enough, and does not create a sense of urgency for the audience to really start caring about it quickly.  Trumbo does well in various aspects including delivering an absolutely tremendous cast for the film.  It seems the only mistake on the part of the casting director was choosing Louis C.K. for what turned out to be quite an important role.  I have nothing against C.K., it just seems that the performance fell flat on what seems to be an already struggling film.  That being said, the film can be quite enjoyable.  Cranston carries the film as hard as he can, delivering laughs and heartfelt moments at every turn. The film leaves you feeling well informed and with a new perspective which is a lot more than many films can boast.  Overall I do recommend the film.  I really did enjoy the story and the way they were able to present in a way that stays with you.  You can purchase this edition HERE.