Tron Legacy is a film that has always troubled me. I’ve always, since I saw it in the early 2000s, been a huge fan of the original Tron. I chose that film to kickstart the 70mm Classics review series, because of my deep respect and admiration for the passion and innovation put into the production of Tron. Nearly 30 years later, in 2010, Disney decided to jump on the big budget sci-fi bandwagon hoping to cash in not only only the sci-fi craze going around, but also the nostalgia factor, waves that have continued to have profound effects today in 2016 with the relaunching of Star Wars, Jurassic Park, and comic book movies en masse. 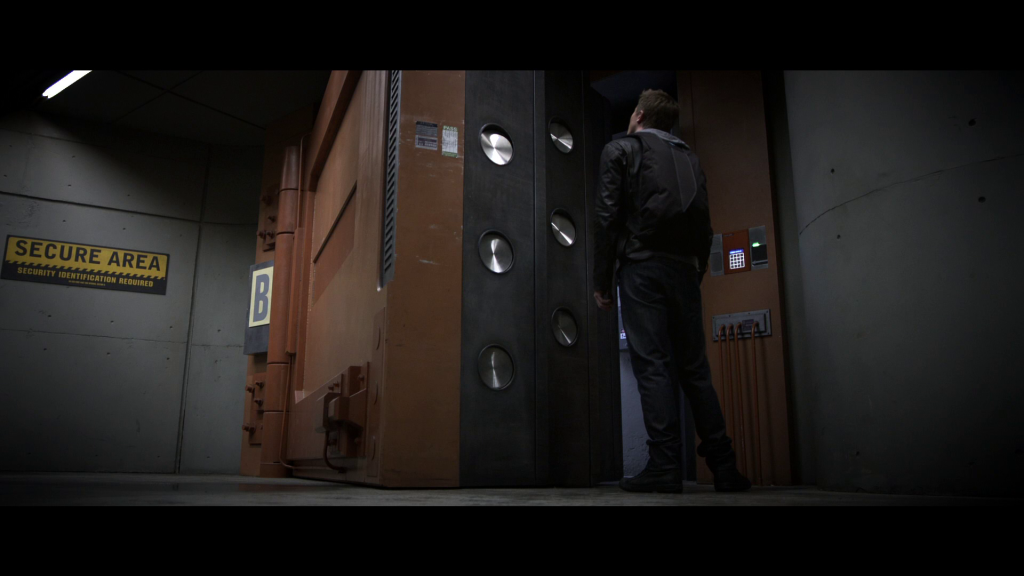 When I originally saw Tron Legacy in its initial release, it drove me crazy. As a conflicted, hormonal 15 year old, I lashed out at Tron Legacy. I hated it’s stupid ending, the pacing of the film, the guy who played Flynn’s son, and just about everything about it. It lacked so much of what I loved in the original film, the sense of fun and adventure, and exchanged it for a desperate dash away from the world of Tron, something that never really clicked with me. There was just something that was missing, and that really pissed me off. Viewing it now however, I’ve found that six year later, maybe I was a bit too hard on Tron Legacy.

Tron Legacy follows the story of Sam Flynn, son of legendary computer genius Kevin Flynn, our hero from the first film. After his father goes missing during his childhood, he channels his passions into getting off the grid, dropping out of school, and living on the edge of society. He satisfies himself by causing mischief at ENCOM, and driving around on his motorcycle. After Alan Bradley receives a mysterious page from Kevin’s arcade, Sam goes off to investigate, and much like in the first film, accidentally ends up transporting himself to The Grid, the computer world of the first film. Once there, he’s condemned to the game grid, much like his father, where he saved from disaster by Quora, a mysterious computer program. She then reunites him with his father, and the three of them must work together to escape The Grid, fighting against the forces of Clu, a rogue computer program who has taken control of everything in order to create the perfect world.

Tron Legacy does its best to pay respect to the original Tron, while also trying to break free from the original film’s plot, which it does in a sort of half baked way.The same foundation is there, where a Flynn is sucked into a computer, and partners up with a computer program in order to defeat the ruler of the Grid and escape the computer. And yet, it lacks the same heart that Tron did. Jeff Bridges, now in his old age, tries to step back into the role of Kevin Flynn, but he can’t seem to figure out whether he’s a wiser, older Obi-Wan Kenobi style Flynn, or The Dude. Garrett Hedlund has about as much charisma as a plank of wood, and Olivia Wilde is alright, but nothing to die over. There’s very little imagination in this film, and it’s shown through a cast of middling performances and a weak script that just tries to ramp up the intensity when compared to the original film; and yet, due to the editing style used, Tron Legacy just comes off as agonizingly slow. It tries some new things to deviate from the original, but it just comes off as generic and leaves a lot to be desired, especially when the original is charged with such imagination.

Where Legacy does succeed however, is in sound design and visuals. The world of Tron has aged well, dropping the fuzzy, innovative yet dated visual of the original, trading them in for a sharp, colorful world, full of heavy contrast and visual flare. As with his work on Tomorrowland, director of photography Claudio Miranda keeps the camera moving, the focus sharp, and the detail at a maximum. The film’s sound design is excellent, with forceful sound effects and a busy 7.1 sound mix. The score, composed by acclaimed artist Daft Punk, is an appropriate match for the film, matching it beat for beat with intensity and subtly, at times expertly carrying the weight of the film on its shoulders. 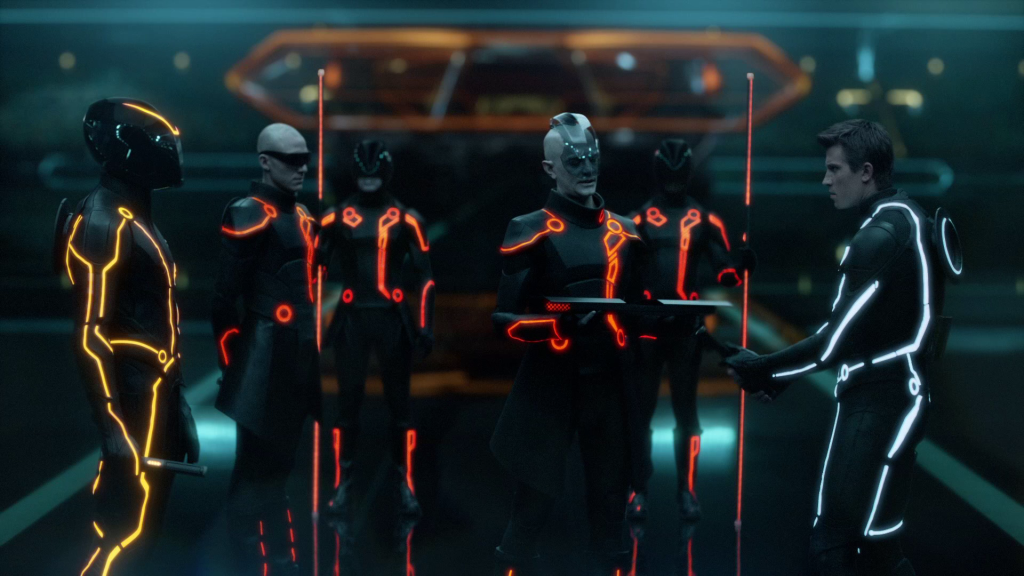 Tron Legacy is not a particularly good movie, but as the years have softened me, I have softened my view on the film. Where it fails in terms of writing and acting, it succeeds in spades in terms of confident visual design and style. It is the ultimate modern example of style over substance, while still maintaining a moderate amount of entertainment for the viewer. It lacks the heart and adventurous nature of the original Tron, but meets it in the middle in terms of visuals, sound design, and score. For those who appreciate technically brilliant movies, Tron Legacy is your kind of thing. All others might want to stay away.

One of the early major digital 3D productions, Tron Legacy was filmed using the Phantom HD Video camera and the Sony CineAlta F35 in 1080p, and mastered using a digital intermediate at 2K resolution, Tron was released to theaters in 35mm and Digital 3D with an aspect ratio of 2.35:1. IMAX film locations got a special vertically enhanced version of the film, that switches between 2.35:1 and 1.78:1 to better take advantage of IMAX screens. Those scenes are preserved here in 1080p for the Blu-ray, which features aspect ratio switching, with about 40 minutes of the film presented in 1.78:1 open matte. 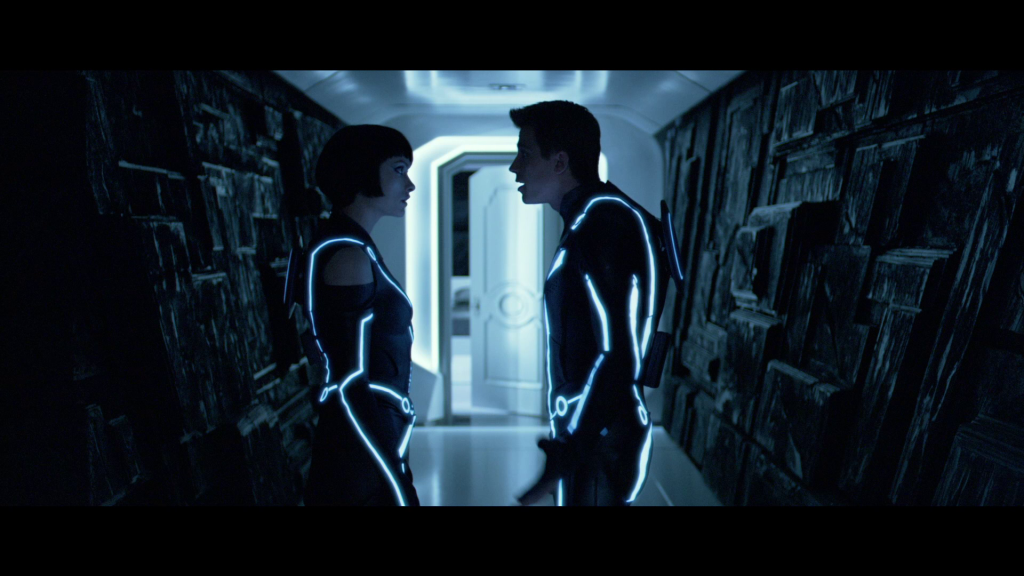 Shot by Claudio Miranda as I mentioned above, Tron Legacy is incredibly sharp and detailed in 1080p. The color is deep and saturated, and the blacks are nice and inky, giving the image a great level of contrast. The visual effects nearly pop out of the screen in 2D. The image however, due to its 1080p digital camera source, is quite noisey almost all the time. I’m glad they chose to not eliminate the noise in the image, but it does give the film a video-esque look. The 1.78:1 scenes are fantastic at showing the size and scale of the production, but unlike true IMAX sequences such as those in The Dark Knight or Interstellar, they offer very little in terms of enhanced quality. This Blu-ray transfer was definitely reference quality in 2011 when it was released, but to me, the noisy image quality detracts heavily from my overall enjoyment, forcing me to deduct half a point. 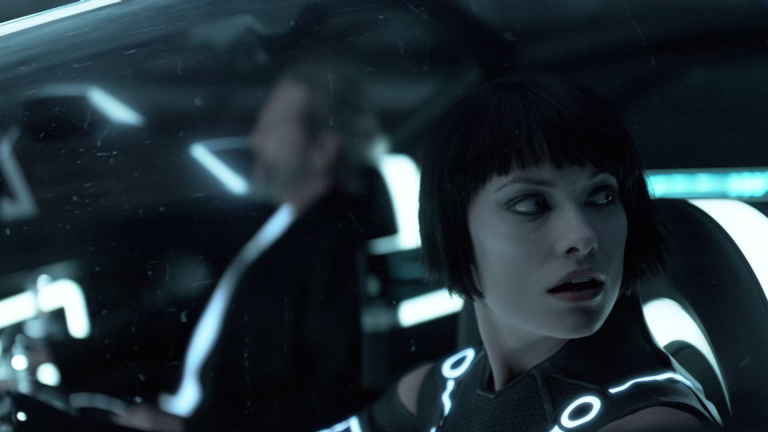 Tron explodes all over the place. Glass shatters in the game grid, buildings are detonated. Light cycles whiz about and crash. Spaceships zip in and out of the frame, shooting at one another. Tron Legacy is a busy movie in terms of sound design, and it holds up incredibly well on home video. The sound mix is balanced for the most part, on occasion dialogue gets lost in the action, but it’s never that terrible. Sound effects pan across the front speakers and pass from the surrounds to the front speakers incredibly naturally. The subwoofer sees plenty of action, with sharp, distinct bass used heavily throughout the movie. Tron Legacy holds up well in the audio department.

Tron Legacy, released on Blu-ray by Disney, is presented in a standard blue keepcase with a slipcover. The included slipcover features artwork that is identical to the keepcase, but the cover is slightly embossed to give a slight sense of depth to the image. The front artwork is a multi-layered collection of the cast’s characters, with each character on a different plane of depth, which is really nice. The back cover, in standard Disney fashion, contains a few shots of the film, but mostly credits, a paragraph about the film, info concerning the bonus features, and technical info. I’m actually a big fan of the way this one is packaged.

In terms of special features, Tron Legacy comes up with a light, but satisfying load of extras, with a disproportionate amount of ads for other Disney products. They are as follows:

The Next Day: Flynn Lives Revealed – a sort of documentary, shot in the world of the film, about the Flynn Lives movement, and the conspiracy surrounding Kevin Flynn’s disappearance. There’s more footage of Bruce Boxleitner in this set of clips then there was in the actual film, which is disappointing. I almost wish this movement had been touched on in the film, instead of demoted to a bonus feature. The info here however, does some excellent world building, and is incredibly insightful, especially for fans of the Tron universe. 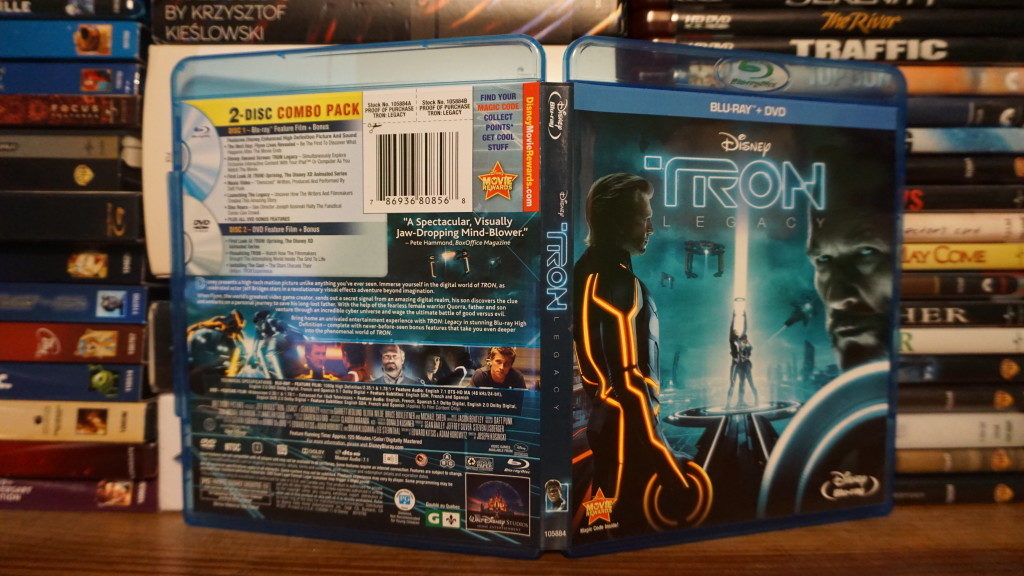 Launching the Legacy – a short documentary clip about the process of creating the story and designs for the new Tron film, and the lengths that the filmmakers had to go through to get Disney to fully support the product.

Visualizing Tron – another documentary series of clips, about the visual design, and effects work for Tron Legacy. Covers a lot of info such as costume design, set constructions, etc…

Installing the Cast – filmmakers and cast members talk about their roles in Tron Legacy, and how they landed the roles. Pretty standard stuff

Disc Roars – a short clip, showing the recording of the crowds at San Diego Comic-Con, which was used to simulate the crowds that watch the game grid in the film. 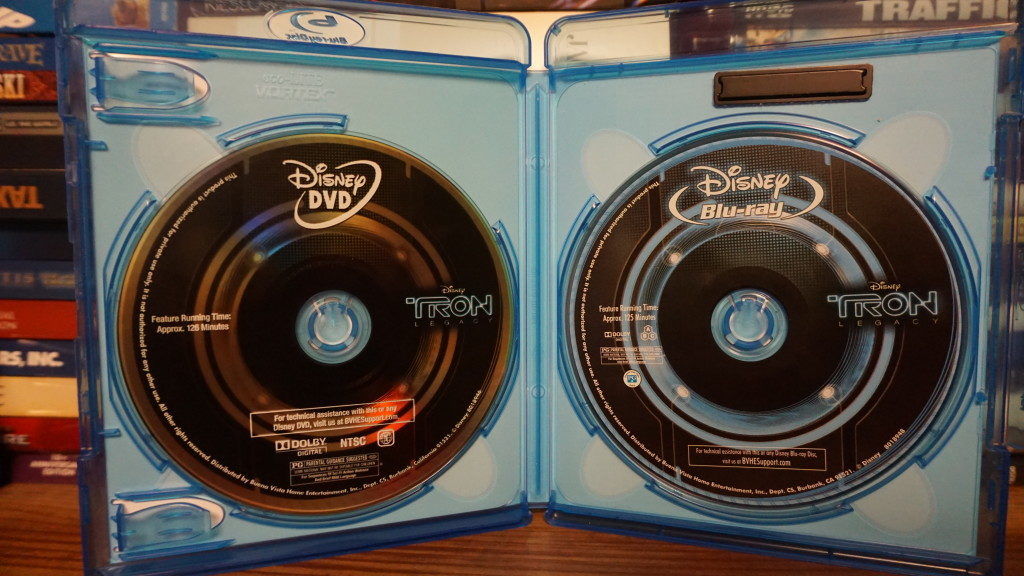 “Derezzed” Music Video – a music video featuring animation inspired by the film, based on Daft Punk’s song from the soundtrack.

All other extras on disc deal with various advertisements and extraneous information. Overall, there isn’t a ton here, but what is included is pretty satisfying, especially if you’re a big fan of the Tron universe. 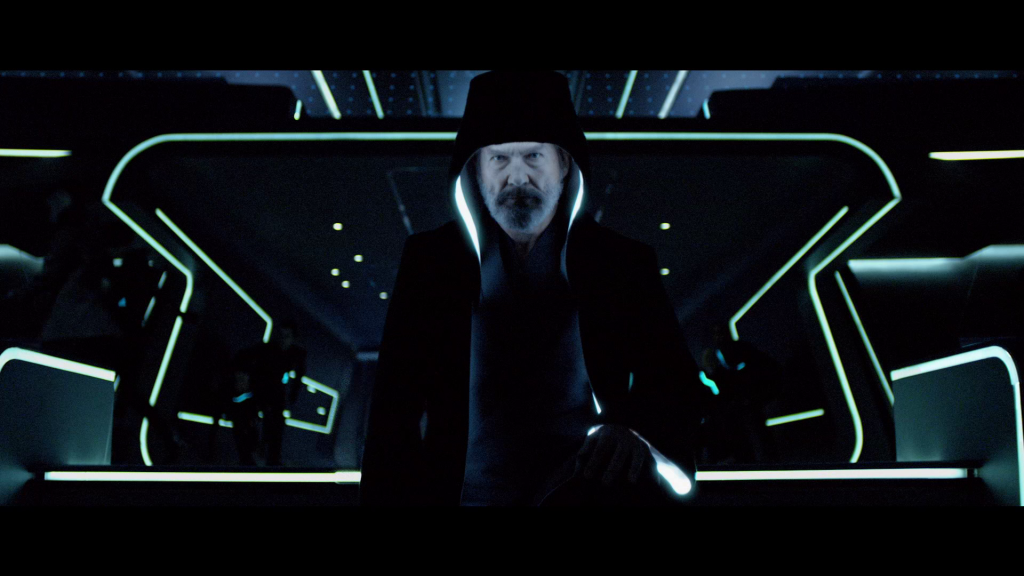 Tron Legacy could have been something special, but ultimately the filmmakers chose style over substance. The story is weak and disappointing, an unworthy follow up to the original in terms of tone and pure entertainment value. The visuals are, however, outstanding, and the film’s visual transfer holds up those incredible visuals, even if they fall prey to the limitations of early digital cameras. The 7.1 DTS-Master Audio soundtrack is lively, and loud in all the right ways. The special features are limited in quantity, but not quality, and the packaging is pretty cool. Overall, this Blu-ray release is moderately recommended.