Triple 9 is one of those movies with a very interesting behind the scenes story about how a script finally makes its way to screen. The Triple 9 script had been floating around for a while, finally making Hollywood’s “Black List” of great available scripts in 2010. After being picked up in 2010, the film still went through many changes until shooting finally commencing production in 2014.

The film was originally slated to star Shia LaBeouf in the Casey Affleck “good rookie cop” role, and had famous musician Nick Cave (The Road, Lawless) on to compose the movie’s score. However, LaBeouf dropped out and was replaced by Charlie Hunnam (Sons of Anarchy), who then dropped out himself and was replaced by Affleck, and Cave dropped out of the project shortly after that. In 2013, Cate Blanchett and Christoph Waltz were set to join the film, but then they dropped as well and were replaced by Kate Winslet and Woody Harrelson. By the time this film started shooting in 2014, there had been a ton of major changes; never a good sign for a film’s future.

Even with all the confusion, the final cast is great. In fact, on paper, it may be the best ensemble cast of any film in 2016. As previously mentioned, Casey Affleck, Kate Winslet, and Woody Harrelson star along with Aaron Paul, Chiwetel Ejiofor, Norman Reedus, Anthony Mackie, and Gal Gadot. A powerhouse lineup for sure, Triple 9 had more than enough star power to push this film to a successful run. However, many of these great actors are either miscast or poorly utilized, and so Triple 9 is not nearly the home run it should have been.

One great example of a poor casting choice is with Kate Winslet, who plays a Russian Mob wife named Irina, and is the antagonist of the story. This is not a great fit for her, as her Russian accent is weak and her look is much more “Soprano” than “Putin”. Also, for you Walking Dead fans out there, Norman Reedus (Daryl Dixon on the popular AMC show) does not see more than five minutes of screen-time. If you went in expecting lots of Reedus, this one may not be for you. Aaron Paul (Jesse Pinkman in Breaking Bad) also plays a fairly minor role, so fans of any of AMC’s terrific television programs will leave Triple 9 wanting much more from the these two fan favorites.

The film follows a group of ex-military, ex-cops, and dirty detectives who have the Russian mob pushing them to pull off some fantastic, near impossible heists. When the group squeaks by on a major bank heist in the opening sequence, they are immediately tasked with a follow-up task stealing old files on the Russian Mob’s patriarch, which are hidden in a secret Homeland Security compound. Without pulling off the big one, they will not receive payment from the Mob and will likely all be killed, so a plan is proposed to pull off a “9-9-9”. A “9-9-9” is police code for an officer down, which will pull all of the department’s resources to that spot and allow them to get into the DHS building with limited police intervention, hence the film’s title. The tension builds as the plan unfolds, and nobody is sure who to trust, or when to turn their backs. It’s an intense film, and it keeps you engaged and on the edge of your seat for most of the runtime. In the end, the final heist is a bit of a disappointment, but the resulting payoff and consequence is well-worth waiting for.

The bright spots in the cast are Mackie, Affleck, and Ejiofor. Mackie plays a dirty gang squad detective named Marcus, who is tasked with taking Affleck’s character Chris, a rookie gang squad officer, under his wing as a partner. The relationship between the two is Traning Day-esque, with Mackie and Affleck dealing with the typical conflict between the rookie cop and the hardened veteran. The relationship between Mackie and Affleck culminates in a way very similar to the way it does with Denzel Washington and Ethan Hawke’s characters in the aforementioned 2001 film . Marcus and Chris both play a part in the larger plot as well, but their separate storyline is one of the better parts of the film.

Ejiofor plays the heist squad leader, an ex-military contractor named Michael who became involved with the Russian mob via his relationship with his son’s mother Elena (Gal Gadot), who happens to be the sister of Irina, the mob wife. The struggle between his life as a criminal and a father and the lengths he is willing to go for his son create some of the movie’s most intense and emotional scenes. He plays an excellent “bad guy you want to root for” type of character, and he really carries the film in any of the scenes which don’t include Affleck or Mackie.

Even though it is not an all-time great heist film like The Town or Heat, Triple 9 is an above average film and a very enjoyable viewing experience. It is much smarter and better made than most of the typical action movie fare that has hit the screen recently, and I would recommend it based on its excellent cast, extremely intense, nail-biter action sequences, and the original story.

Triple 9 struggles at times to find itself, but I found it to be a great time and a fun movie to enjoy at home. I would recommend it to fans of this genre, and if you liked End of Watch, Heat, Training Day, or The Town, you will most certainly enjoy Triple 9 as well.

Triple 9 was shot on a few variations of the Arri Alexa and was finished in a digital 2K intermediate for theaters. The film has a nice amount of grain, which is strange for a film that was shot digitally, so it must have been added as an artistic choice in post-production. However, I think it was a smart choice and it added to the grittiness of the story and to the immersion at home.

There are many dark sequences, but they never look washed out. The opening sequence features most of the color and daytime shots, and they look great, especially when the dye/smoke packs from the bank robbery explode in the minivan. Overall, it looks like any modern film should, but it would not be great to watch as a reference quality disc for the lack of any real color pallette. I would suggest adjusting black levels on your TV prior to watching, and if you have an LCD/LED TV that is prone to a flashlighting effect in dark scenes, this one is certainly one of the darker movies I have watched on my current setup. My 55″ Sony HDTV performed well, but others may not fare as well as I did if you have lower end models.

I had a great experience with the audio on Triple 9 and the DTS-HD Master Audio 5.1 track made full use of all 5 speaker channels. The action sequences, especially the first heist and the police department’s apartment raid, were very impressive and the pulsing soundtrack combined with the blaring gunshots made for an intense experience. Dialogue was clear throughout, and the volume never needed any adjusting. The film is LOUD, and so if you have cranky neighbors, this would not be the choice for a late night movie. I could definitely see this being a Blu-ray that could show off a new home theater system, and I was very happy with Triple 9‘s audio.

Triple 9 comes packaged in a typical slipcover/Elite case with a digital copy that can be redeemed on UV services or iTunes, and one Blu-ray disc. There is no DVD included with this release. The slipcover was actually a pleasant surprise, as it had some great texture to it. The title on the front and on both spines is raised and embossed, and the front cover also features the “red dye/smoke” scene from the opening heist and gives the smoke a rough texture to accentuate the look. The slipcover and case feature the same artwork. 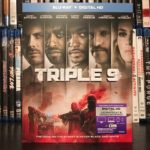 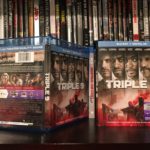 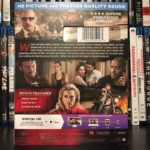 Under the Gun – The acclaimed cast of Triple 9 offers an in-depth look at its characters and the pulse-pounding twists and turns at the heart of the film.

Authentic World – Director John Hillcoat and the cast of Triple 9 discuss how their grounded approach to filmmaking helped highlight the film’s gritty, authentic look and feel.

Triple 9 is certainly fun to watch, and the twists and turns, though a bit predictable, make for a great experience. The story has plenty of holes, but for pure entertainment purposes, this one was fun. The video and audio presentations were above average, and the slipcover is one of the nicer ones I remember on recent releases as a lot of effort went into the packaging design. However, the lack of special features and the subpar casting choices leave Triple 9 just a few steps away from being one of the great releases of early 2016.

Note: This Blu-ray was sent to us for review. This has in no way affected the review process or opinion on the film or product presented.