Since Romero created Night of the Living Dead in 1968, zombie films have been a mainstay of genre filmmaking. While the Zombie genre has plenty of diehard fans, it’s not uncommon to hear critics say that zombies have been beaten like a dead horse. What roads are left to tread in a genre that has been so thoroughly exploited already?  As I’ve outlined previously, Korean filmmakers aren’t beholden to Hollywood’s stigmas and they’ve been able to breath new life into genre filmmaking. I’m not saying this film is a special snowflake unlike any other zombie film. It’s impossible for someone to make a zombie film that isn’t derivative in 2017.  However, Train to Busan (2016) is still one of funnest and most intelligent zombie films I’ve seen. 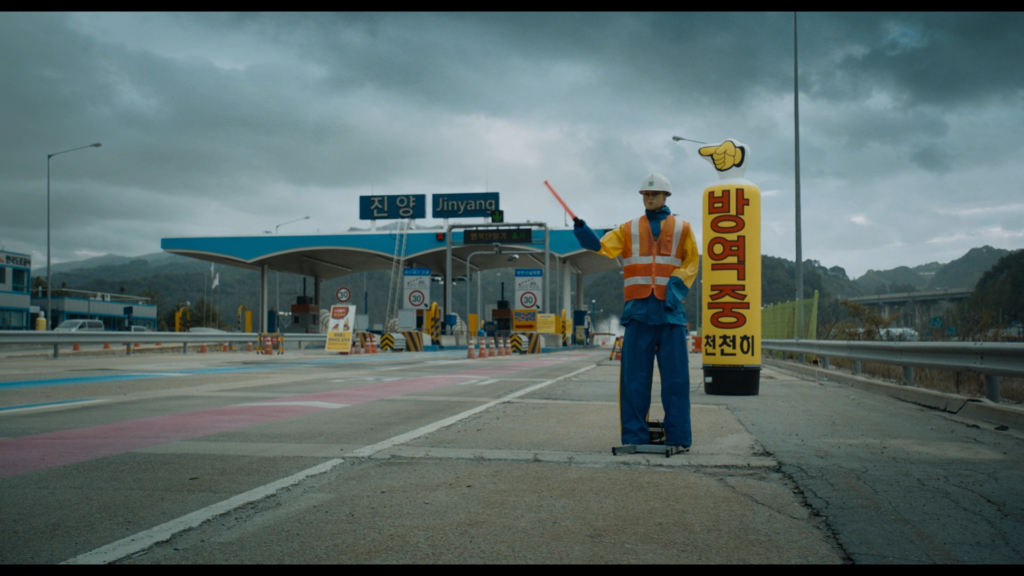 At first, its hard to tell this is going to be zombie movie. It’s just another day for investment funds manager, Seok Woo. Stealing from the poor, giving to the rich, and eating some nasty Burger King at his desk. Not surprisingly, Seok Woo works long hours to the detriment of his family life. He arrives home late at night, bearing a dud of a birthday gift for his neglected daughter, Soo-an. Thoroughly guilt tripped, he asks her what can he do to make up for it. “Please daddy, just let me go to Busan to visit mommy.” How could he let her down again? He’s already done that too many times. Thankfully, it doesn’t take long for our heroes to board the ill-fated zombie train. In addition, clever hints warn the viewer of the approaching apocalypse during Seok Woo’s melodramatic introduction.

Train to Busan follows a small group of people attempting to survive a zombie apocalypse on a bullet train bound from Seoul to Busan. While the plot is fairly straightforward, there’s a lot of depth to this film. Just to list an example, it’s hard for as a Cold War history buff like myself to not to notice the similarities in the train’s flight from the zombie horde to the opening months of the Korean War. The Republic of Korea Army was forced to make a similar pyrrhic flight to Busan, besieged and overran by their enemies on all sides (Yes, the zombies are a metaphorical representation of the North Korean Army). While I won’t bore you with many more historical details I always enjoy it when films make clever metaphorical references to real world events. 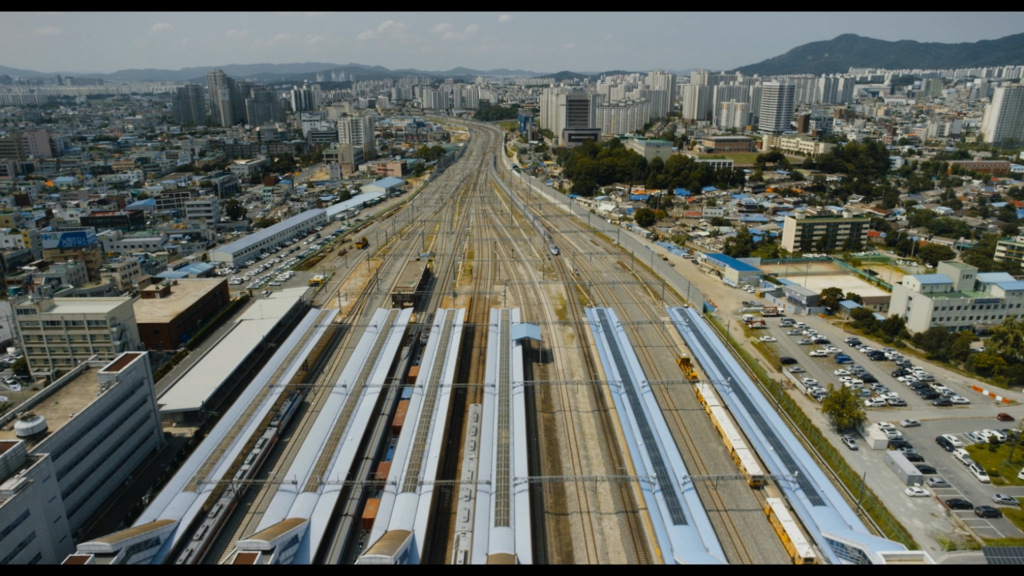 One of the dirty little secrets of zombie flicks is that they are rarely about the zombies. A good zombie movie is chock full of metaphors and will tell you about the human condition, leaving the zombies for a treat (or perhaps giving the zombies a treat?) later in the film. Writer-director Sang-ho Yeon deftly handles the human element in Train to Busan. He creates believable and very human characters and has a firm understanding on how to get you to like or hate the people standing on the screen. That might sound like a basic skill for a filmmaker, but it’s one so often neglected in genre films in the name of special effects. 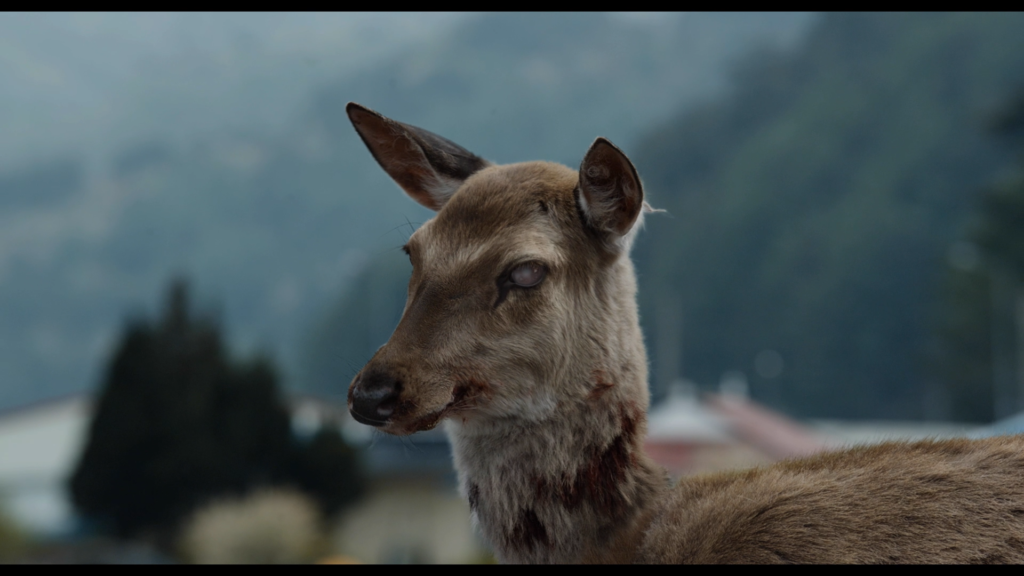 Speaking of the special effects, they’re also quite ingenious. Matched with great Asian fight choreography and cinematography, the closed spaces of the train are used ingeniously. Korean fight choreography often moves like a side-scrolling video game, depending heavily on the tracking shot. The confined train plays well to that sort of fighting, and it looks great on screen. While the CGI in this film seems a bit budgeted at times, the practical effects are top notch and some of the best I’ve seen in a 21st century film.

While zombie films are rarely about the zombies, I must admit that mindless horde still needs to be convincing. Train to Busan has some fantastic zombie makeup, equal parts irresistible and absolutely disgusting. The zombies are covered in blackened varicose veins, showing how the infection has spread (very quickly) through their bloodstream. While I wasn’t a big fan of the hive mind zombies as they were introduced in World War Z, I think this film takes that concept in a more positive direction. The living dead seem nearly unstoppable in this movie, but they’ve got some interesting weaknesses and not just the typical headshot. While not exactly revolutionizing the genre, Yeon utilizes a unique approach in imagining the mindless horde. While some people don’t like it when zombies don’t follow the rules established by Romero, I honestly don’t mind it here. 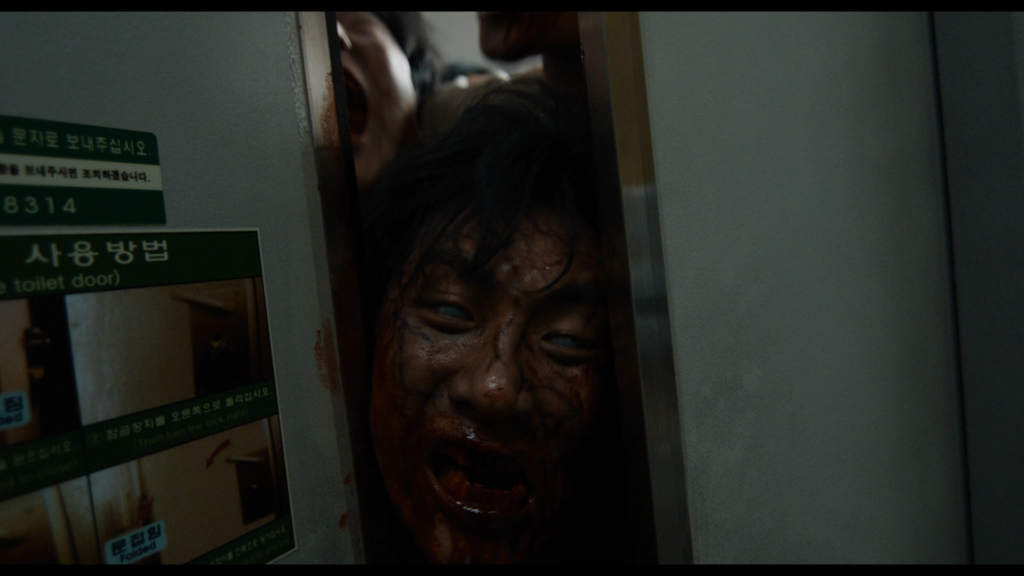 Train to Busan is competently filmed and edited, and there’s not much to complain about with the picture quality. Train to Busan was filmed digitally at 2.8K with Arri Alexa cameras and mastered in 2K. After repeated viewings I was able to nitpick some of the CGI-laden scenes, but the action-based cinematography was otherwise top notch. Digital noise is about what you would expect for a film like this, not overwhelming but not hard to pick out either. I didn’t notice any issues with compression or artifacting. There is a slight green tint applied throughout the film (common to modern zombie flicks), but it’s far from obnoxious. This is a very pleasant film to watch, and it really looks great on blu-ray. If the CGI effects weren’t so noticeable I would have no issue in giving this film a higher score for picture quality. 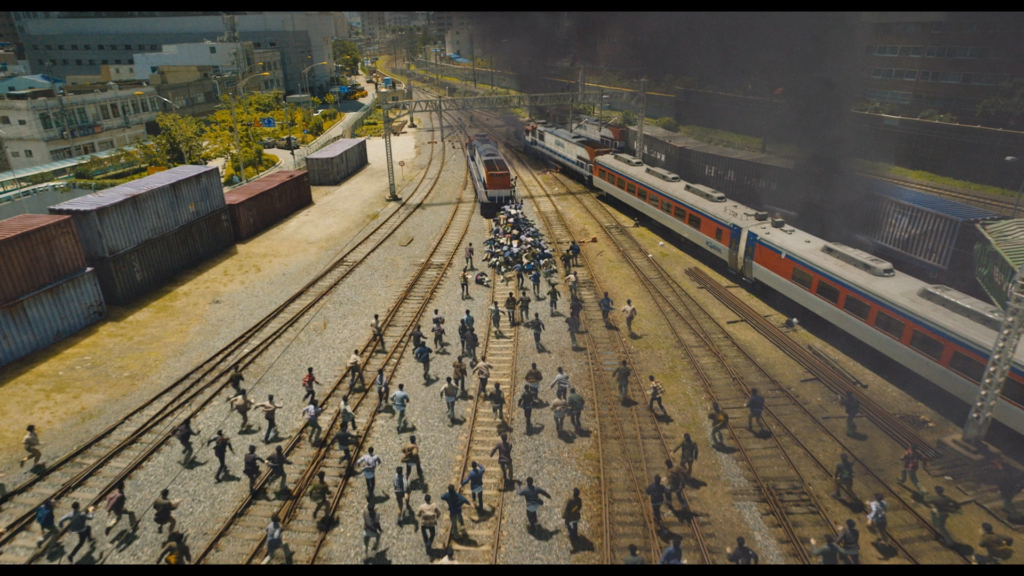 Once again, the sound in this film was very competently handled. Nothing blew me away, but nothing seemed out of place either. I listened to the DTS-X Korean track played as DTS-HD MA 5.1 on my surround receiver. It’s great that the DTS-X track is available if you have the equipment, but I didn’t feel like I was missing much by listening to this movie in 5.1. Much of this film is spent inside the intimate confines of the train with a large zombie horde constantly moaning. This drowns out much of the little things that can typically be picked up in surround audio and doesn’t really allow a surround system to do much besides making the zombies more apparent to your ears. There were a couple moments where I noted the quality of the film’s score, and enjoyed its accompaniment to the fast-paced fight scenes. 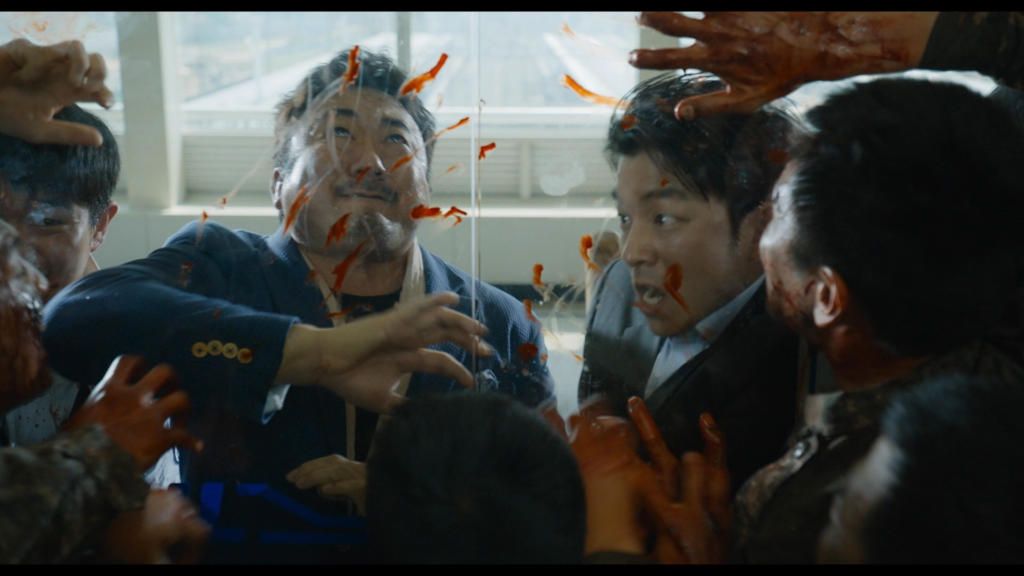 As always, the Well-go packaging looks great, but the special features in this release are somewhat disappointing. The bonus features videos (Behind the Scenes, That’s a Wrap) can be viewed in a period of around 20 minutes. They’re fun and I enjoyed seeing the practical effects in action via the Behind the Scenes video, but there’s just not enough here. Thanks to their recent release of Phantasm, I know Well-go can make a blu-ray with a decent amount of features. Especially when Netflix is a hovering phantom on many new release foreign films, I wish they would take some cues from that release and bring more bonus content to their Korean releases on home video. 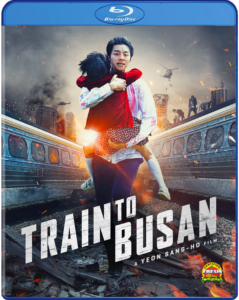 Listed as a bonus feature, Train to Busan includes full-cast English dub tracks. I tried to watch the film in English, but I felt the characters lost their emotions and sense of urgency in the translation. It’s not easy to convincingly dub an Asian film to English, so I’m not going to count this against them in my review. That being said, I highly recommend you view this movie with the Korean tracks if possible (everyone has a friend who hates subtitles). 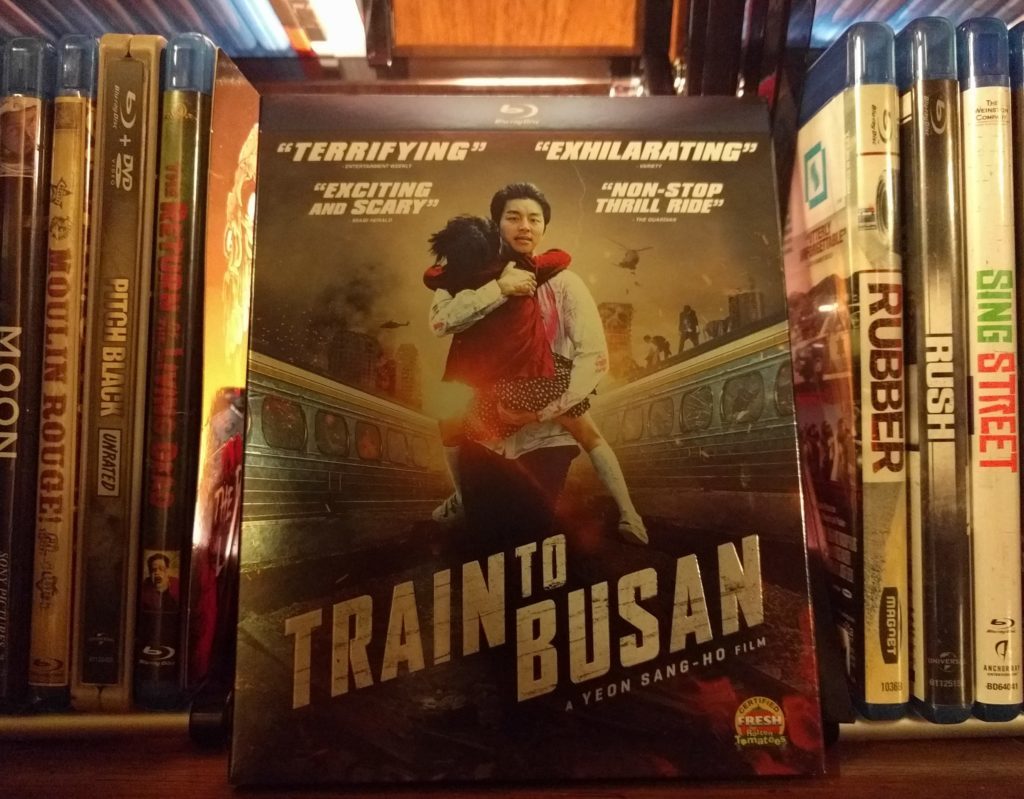 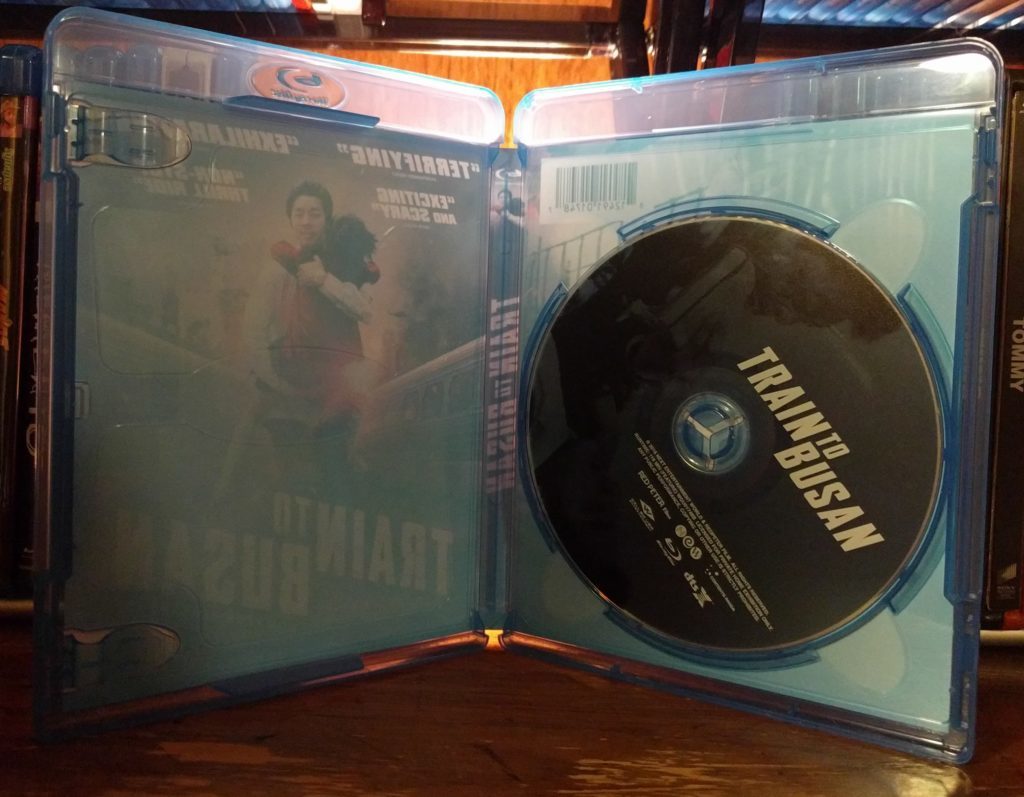 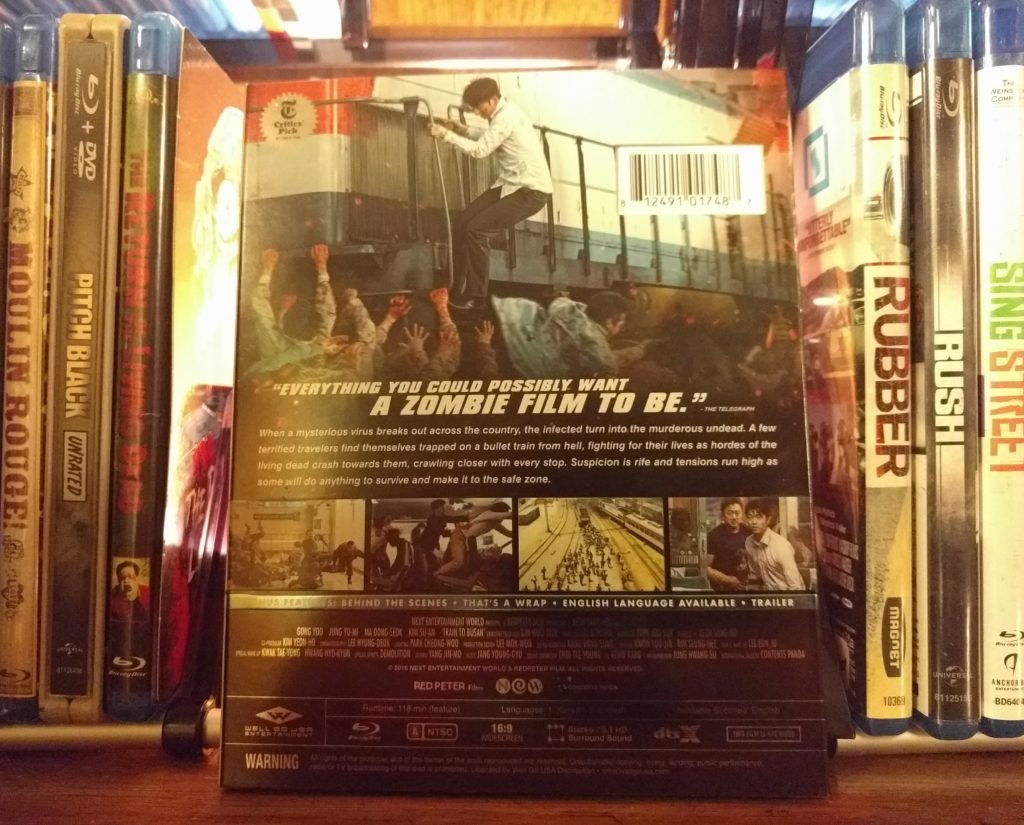 In Train to Busan, Yeon has brought together two of my favorite genres: train movies and zombie flicks. It’s hard not to compare Train to Busan with 2013’s Snowpiercer, another recent big budget Korean action movie set on a train. However, I would like to quickly point out that these are very different films. Don’t let an unfavorable opinion of Snowpiercer stop you from viewing Train to Busan. Yeon has created a much more approachable film. Train to Busan is rooted in the melodrama and development of its main characters, the script leaves few mysteries atr the end, and the ending is well rooted in the reality presented in the movie. Most importantly, Train to Busan has no qualms with being a straightforward action movie. Snowpiercer on the other hand is an arthouse flick hiding behind its big budget.

On that same token, if you’re tired of zombie flicks consider giving Train to Busan a chance. There’s so much more to this film than the zombies and I’d hate for someone to miss such a great film simply because they hate zombies. 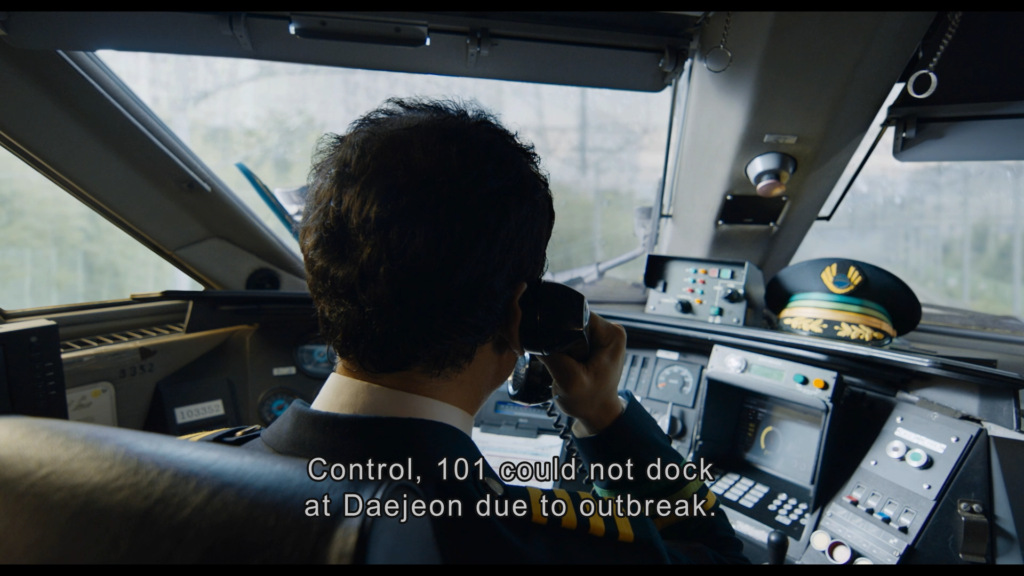 All aboard the zombie train! Choo! Choo!

Interested? You can buy your own Blu-ray of this film by clicking this link.