There are many definitions of what a “Special Edition” may be in the movie collecting community, from the famous Scream Factory! Collector’s Edition series, to the various Box sets, down to the lame “Special Editions” which contain an extra 5 minute featurette. So, for the purposes of this list, I will focus on the Special Editions which go above and beyond just the movie and include some sort of figure or statue, creative packaging, or a physical characteristic that separates them from a typical Blu-ray release. 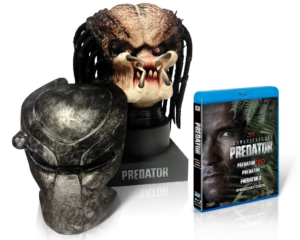 Predator received a new 3D release back in 2013, and although the 3D release is still widely available, the limited edition “Predator Head” version is now only available outside of the US, on places like Amazon Japan. However, if you were lucky enough to grab the US release while it was available, you got a great set. The head piece actually holds the 3D Blu-ray in a drawer located within the base of the bust, and the bust itself is extremely well-done. The head features a removable gray mask, with the ugly Predator head in full effect underneath. The detail on the bust is exquisite, and it really would look magnificent on any shelf. This would be a centerpiece of any Blu-ray collection, and is a must-have for Predator fans. 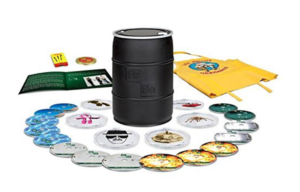 Most collectors have heard of the Breaking Bad Barrel set, but I still see a lot of inquiries on various forums and online communities asking about this excellent Blu-ray release. I personally own the barrel, and it is one of the best pieces that I have ever purchased. The packaging is great, with the barrel opening up on the side, revealing a slot for each of the seasons of Breaking Bad, including tons of bonus discs with over 55 hours of extra content and a full-length 2 hour documentary. The top of the barrel also pops off, held together nicely by a rubber seal, and it includes items like an “El Pollo Hermanos” apron, a “Better Call Saul” matchbox which is also a 4GB flash drive, and  a commemorative coin celebrating the great run that Breaking Bad had on AMC. Basically, there are cheaper options available if you just want to get the entire series on Blu-ray, but the barrel is the gold standard for TV Complete Series sets on Blu-ray, and I recommend picking it up before it is gone. 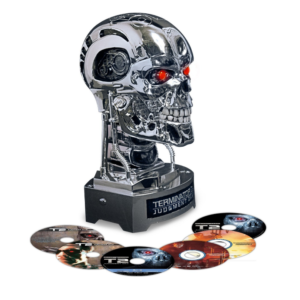 Terminator 2 is already one of the best sci-fi/action movies ever made, and this set just makes it even greater. This is probably the nicest bust that is on this list, and I rate it a tad bit higher than the Predator bust because of the beautiful chrome (insert Mad Max: Fury Road joke here) which would stand out on a shelf even better than the Predator bust. I called the Predator bust a “centerpiece”, but this Terminator Endoskull bust is shiny enough to be an actual centerpiece on a dinner table, and the light up eyes would make for a great candlelight dinner. Besides the great packaging, the six discs included in this release are packed with features that would impress any fan. 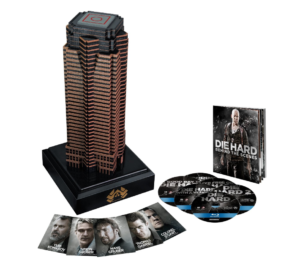 At just $65, this may be the most affordable special edition on this list, and for that price, this is a steal. This set is packaged within the iconic Nakatomi Plaza building from the first Die Hard movie, with the Die Hard Collection box set hidden in a drawer at the base of the building. The building itself is a very nice model, and was a very clever way to release this collection. If you have the shelf space for a fairly tall model like this, then I highly recommend it over some of the other Die Hard collections available on Blu-ray. This release includes all five movies on Blu-ray, as well as a bonus disc, a Digital HD copy of each Die Hard movie, and a 32 page booklet. 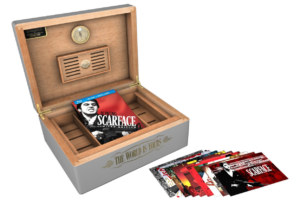 This is probably the most unique and rare special edition on this list, as this Limited Edition Humidor packaging was limited to just 1,000 copies, and is currently listed at a reasonable $999.99 on Amazon. However, if you ever happen to see one of these in the wild, make sure you snap it up. This release was hand-made by legendary humidor crafter Daniel Marshall, and it is a 100% functional humidor that can store up to 100 of your favorite cigars. The humidor is beautifully made, individually numbered and complete with a Certificate of Authenticity and embellished with a Scarface medallion. Inside, it features a Scarface steelbook, complete with a digital copy of the movie, 10 collectible art cards, and the 1932 original Scarface film. I own this steelbook as a standalone, and it is one of my favorites. To include it with a beautiful functioning humidor makes it a no-brainer for true fans of Scarface, or just split it with a friend who loves cigars and keep the steelbook if the humidor isn’t really your thing.

Special Editions might not be for everyone, and you certainly need to have some open shelf space for most of these releases, but if you are a super fan of a movie or TV series, these could all be the best piece in your collection. For those looking for something new, there is always the brand new Independence Day remaster set with the alien ship figure, the upcoming Batman V. Superman special edition Blu-ray with beautiful Batman statue, or the new 4K remaster of Labyrinth, with unique packaging.