With the Scream Factory “Summer of Fear” Sale running right now, I thought that this was as good a time as ever to write about my Top 5 favorite Scream Factory releases. Obviously, my opinions may not align with everyone’s tastes, but I hope that by reading this list you will find some new titles, re-discover old favorites, and help you start to shop through the extensive Scream Factory catalog.

The second installment in the Texas Chainsaw Massacre franchise is probably the most different from all of the rest, but in the best way. Rather than a creepy, terrifyingly bloody movie, this sequel is colorful, funny, and entertaining. It is really a lot of fun, and you don’t have to have seen the original movie for TCM2 to make sense. Some of the characters overlap, and there are some references to the original, but for the most part this is a standalone film. I watched both the original TCM and the sequel back-to-back when this Blu-ray was released, and I found that I enjoyed the sequel much more from an entertainment standpoint. The original is a timeless horror classic, but TCM2 is so unique and has a higher replay value, making it well worth a purchase. The new 2K transfer from Scream Factory is incredibly well done, and the packaging and special features are excellent. Click here to read our review of this release! 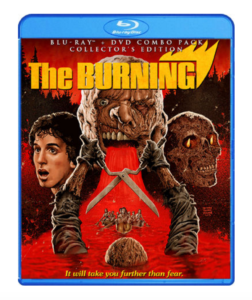 The Burning is my favorite slasher film not from a franchise. Sure, Michael Myers, Jason Voorhees and Leatherface are more recognizable characters to most horror fans, but Cropsy from The Burning is absolutely one of the most terrifying characters in any slasher. The makeup work for Cropsy is a little dated, but he sports a face that you will be seeing in your nightmares. This film was released right at the start of the 80s slasher-craze, and was mostly overshadowed by Halloween and Friday the 13th. However, Scream Factory saw the cult following it achieved over the years, and released this Blu-ray packed with features in 2013. There is no new transfer noted with this release, but the special features and excellent packaging are well-worth a purchase. For fans of slashers. this is a must-see movie, and I would not be surprised if it became an all-time favorite after viewing. 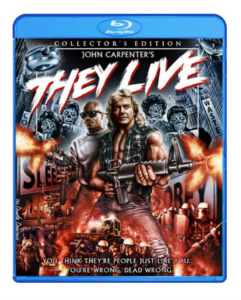 They Live is my favorite John Carpenter film outside of the original Halloween, and in today’s consumer-centric society, it is as relevant as ever in its message. The late ex-WWE Wrestler Roddy Piper stars in this movie, with Keith David (The Thing) in a supporting role, and it delivers some of pop culture’s most iconic quotes and references. If you have ever seen an “OBEY” shirt, or heard the phrase “I have come here to chew bubblegum and (insert action here), and I’m all outta bubblegum”, then you owe They Live a watch. The movie isn’t necessarily horror, but it is more of a dystopian sci-fi movie like Escape From New York. I went into this movie blindly, and really enjoyed it. Scream Factory released another feature-packed release of this movie, and if you can find one with a slipcover, you are one lucky buyer; this is one of the most notoriously hard slipcovers to find in the Scream collection. 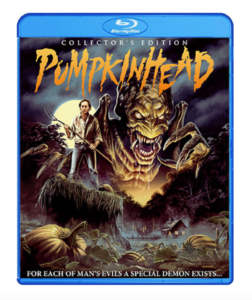 Pumpkinhead is classic cheese-horror; teenagers do something stupid, which sets forth a chain reaction and creates a monster. However, Pumpkinhead is special for the monster itself, the titular creature that is created by a scorned father to pay back the teens for their crimes. This movie is full of creepy rituals, excellent creature-work and special effects that add just the right amount of cheese, and a fun-filled horror adventure. Scream Factory delivers again with a Collector’s Edition Blu-ray release that features a great slipcover and tons of special features, and is well worth the purchase price. I would recommend picking up this release because of the excellent creature work, above all else. 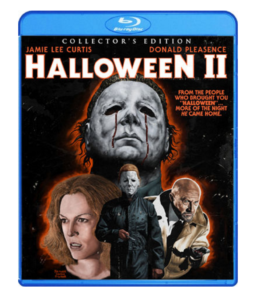 Halloween II is close to my heart, as I am a huge John Carpenter fan, and a huge fan of the Halloween franchise. Simply put, this release from Scream Factory deserves to be on any horror movie Blu-ray Top 10 list, as it is that good. It was actually the first movie that Scream Factory released on Blu-ray, along with Halloween III, and it is one of their finest releases. This movie picks up immediately after the original movie, and extends the story of Laurie Strode and her battle against Michael Myers on that fateful night. This Blu-ray release features both the Theatrical Cut and the Television Cut with added footage, which is a great addition to the Blu-ray that was previously unavailable on home media. Thankfully, these are the things that Scream Factory realizes collectors are clamoring for, and they have provided us with the definitive version of Halloween II. This Blu-ray release is also packed with commentaries, features, and interviews, making it a must-own for fans of the franchise. Also, if you are a super fan with a fat wallet, the Halloween: Complete Collection set, also from Scream Factory, is the best way to own all of the films in the franchise.

Thanks for checking out my Top 5 Scream Factory Blu-ray releases, and enjoy the “Summer of Fear” sale. Hopefully you find some great deals and pick up some new horror titles from the excellent Scream Factory catalog.