Brad Bird’s work made a really strong impression on me as a child, with films such as The Iron Giant and The Incredibles providing humor, action, and fantastic characters who broke the bounds of reality in the most fascinating ways. As I moved into my high school years, I got to watch Brad move into directing live action movies, as he took the helm of the Mission Impossible franchise, sending Tom Cruise and his team on another awe inspiring journey with fantastic set pieces, great action, and phenomenal large format photography. As a result, I awaited the theatrical release of Tomorrowland with great excitement, following the unique trailers straight to the Digital IMAX screen on May 22nd of this past year. The results? Tomorrowland is……somewhere lost in the middle. 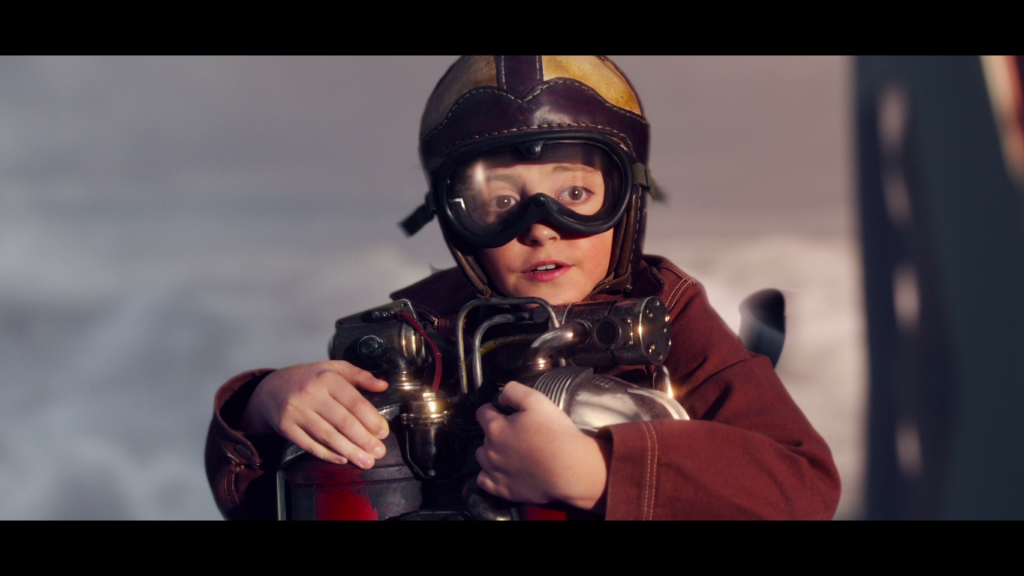 Tomorrowland opens up in the midst of a world fair, as we watch a child inventor, Frank Walker, try to enter a jetpack that he’s invented into a contest, with hopes to one day finish the device. A young girl his age, having watched him be rejected, encourages him to look to the future, and whisks him off to a futuristic world, full of incredible innovation and artistry, a world rooted in the visions of the future from the 1950s. Our main story, however, follows Casey Newton, a young girl, who after being caught and arrest for sabotaging the project to tear down NASA’s launch platform, is given a pin. The pin transports her temporarily to this same future world, giving her but a taste of what Tomorrowland has to offer. She then embarks on a quest to learn more about this pin, and in the process she meets up with the same young girl from the world fair, Athena. She has recognized her potential as a dreamer, and sends her on a quest to enlist the help of Frank Walker, now much older, in an attempt to unite them so that they may work together to save the world of Tomorrowland and Earth from disaster.

Tomorrowland is essentially two different movies, one that’s incredibly intriguing and exciting, and one that kind of falls on its face. The first of those two, comprising of the majority of the film’s briskly paced 130 minute runtime, is the quest to find Tomorrowland. Following Casey, played by the lovely Britt Robertson, on her adventure to meet up with Frank Walker and convince him to take her and Athena to Tomorrowland is an absolute blast. This part of the movie is full of action and humor, constantly pitting our average teenage girl against a variety of dangerous android assassins, as she attempts to figure out just what exactly is going on. Her interactions with the now old and bitter Frank Walker, played enthusiastically by George Clooney, are hysterical, as Casey’s curiosity and energy is foiled by Walker’s frustration and bitterness, with Athena, played by Raffey Cassidy, stuck in the middle trying to keep them under control. 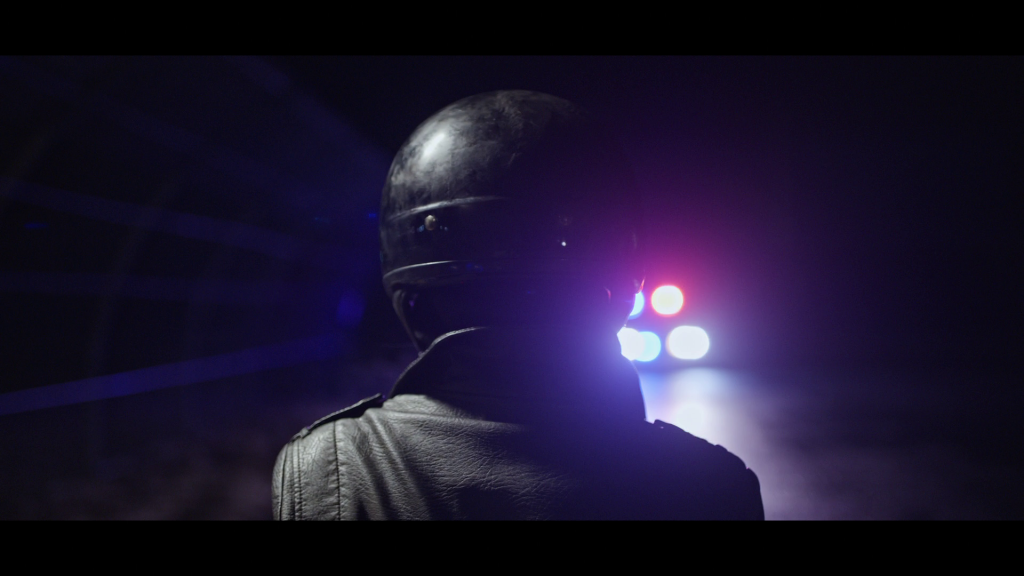 The film’s second piece, which takes place in the much hyped Tomorrowland, utterly falls on its face. It loses its spark, swapping out the energetic and bombastic nature of the Earth portion of the film for a preachy message driven climax, all about how we’ve poisoned our planet and have sent Earth spiraling towards doomsday. Our trio is pitted against Governor Nix, played by television favorite Hugh Laurie, who attempts to thwart them from saving the two worlds. Unfortunately, instead of coming off as intimidating or menacing, Nix just comes off as a stubborn jerk. The film’s pacing kind of grinds to a halt, and all of the momentum it had rolling into the Tomorrowland sequence being tossed out, in order to lecture us on what a terrible job we’re doing taking care of the planet, before speeding right back up into an exhilarating climactic battle.

There’s just something off about the entire Tomorrowland portion of the film, and it poisons any kind of enthusiasm I had for the feature, as it feels lecture-y and played out. If I wanted to here a lecture on the trends of modern consumers and environmentalism, I probably wouldn’t look for it in a blockbuster Disney movie, especially when it’s handled this poorly.

Tomorrowland should be a fantastic movie. It has an amazing cast of actors and actresses behind it, some truly incredible effects sequences, and a really fun first half that really gets you going, only for the film to topple over as it tries to sell you on its idealism. It’s so disappointing, as you spend most of the movie being driven along by that Brad Bird magic, only for it to crash into a wall and explode in the latter half of the film. I still found enjoyment in the film, but it ultimately falls way short of the grand expectations that Brad Bird and his team’s work has set for themselves. It’s not a bad movie, but it could have been a great movie, and that makes me sad.

Shot on the newest line of Sony digital cinema cameras, the CineAlta F55 and F65 in 4K, and prepared using a 4K digital intermediate process. Tomorrowland was shown in standard theaters with an aspect ratio of 2.20:1, an homage by Brad Bird to classic 70mm features of the 50s and 60s. The 1080p image for this Blu-ray maintains the letterboxed 2.20:1 aspect ratio. 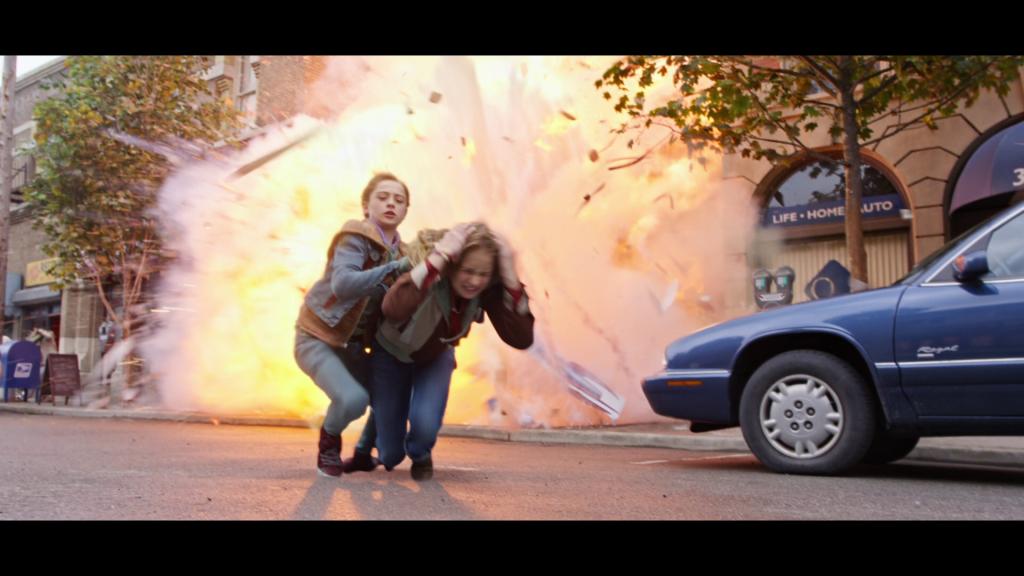 Tomorrowland is a beautiful movie, shot by Claudio Miranda, who has been at the forefront of digital cinematography pretty much since it began. His work is gorgeous maintained on the Blu-ray, as each detail is rendered in life-like crispness. Close ups are incredible, revealing every inch of our main casts’ faces. The film features sharp, color rich wide shots of the film’s various large set pieces, each once resolving absolutely. Not a single shot falls soft throughout the film’s runtime, making for a beautiful viewing experience. Digital noise is present in even amount throughout the film, lending it a bit of a rough texture, spiking during nighttime scenes, and is about the only thing holding this presentation back from being absolutely perfect. 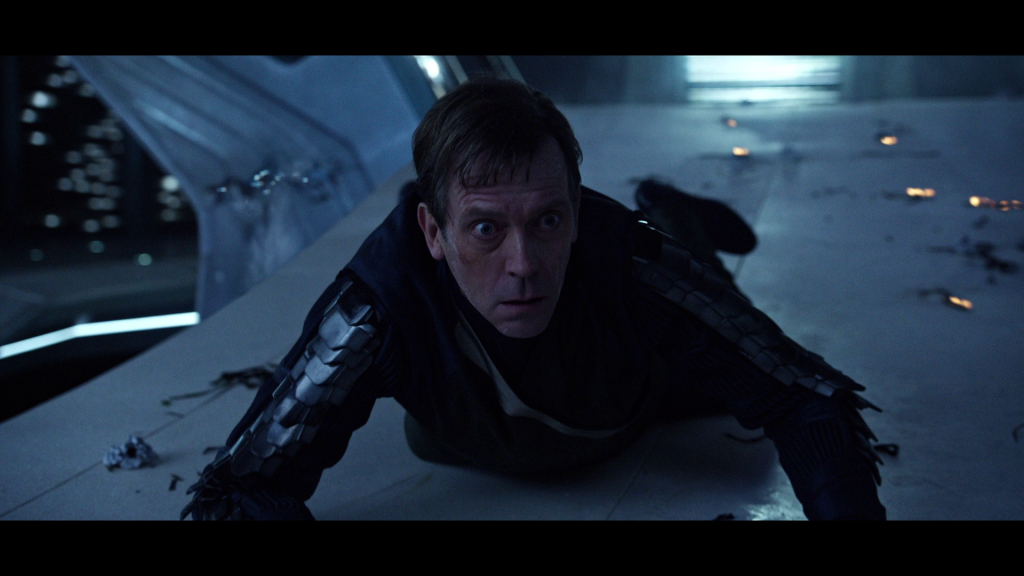 Tomorrowland is an absolute tour de force in the audio department. During futuristic scenes, ships are constantly zooming around the soundscape, taking full advantage of the rear as the zip by. The same goes for lasers and debris during the more exciting scenes. Dialogue pans nicely a frequently to the left and right channels depending on where characters are in the frame, only sounding a bit off once or twice in the mix. Subwoofer activity is intense and sharp, frequently called upon as the action ramps up in intensity. Michael Giacchino’s wonderful score frequently fills out the front and rear speakers as an excellent partner to the film’s sound mixing. This one definitely receives top marks in the audio department.

Tomorrowland comes in a standard blue keepcase with an accompanying slipcover, which I did not receive with my copy. The two feature identical front and back artwork designs, with the front showing out three heroes set against a backdrop of Tomorrowland. The back cover art, in typical Disney style, is mostly text, with a list of bonus features, a paragraph about the film, and a set of technical specifications. Overall, the packaging for Tomorrowland is quite nice, and is very easy on the eyes. 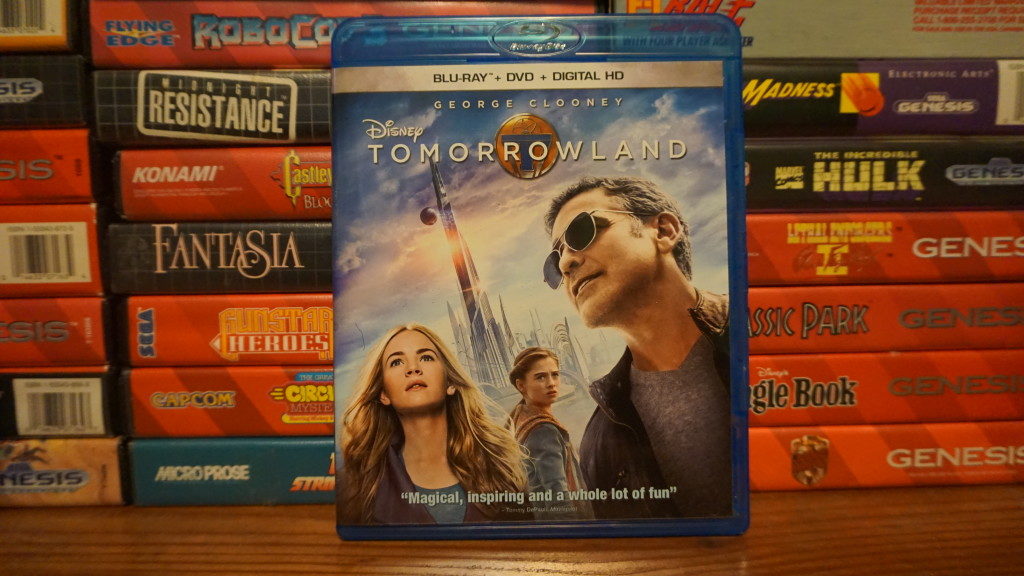 In terms of special features however, I wasn’t exactly blown away. It’s mostly throwaway gags and shorts that don’t seem to do a whole lot. They are as follows:

Remembering the Future: A Personal Journey Through Tomorrowland with Brad Bird – a short feature about how Brad Bird and his team developed Tomorrowland, and what inspired him to make the movie, things such as space exploration, and the Disneyland theme park.

Casting Tomorrowland – your typical feature, in which the team talks about how they chose who to cast for what, and how they got big names like George Clooney to join the film. Nothing mindblowing here. 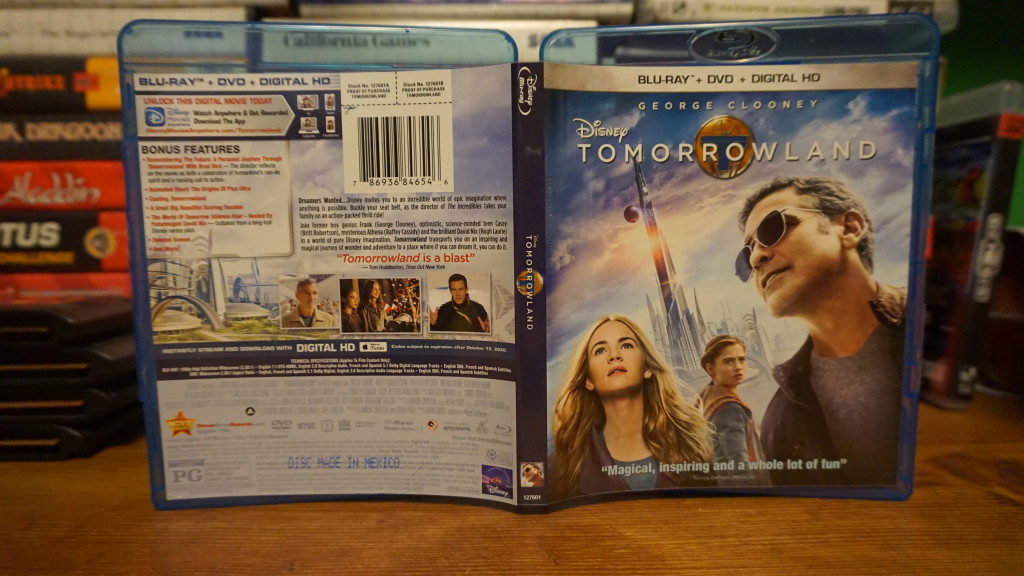 The World of Tomorrow Science Hour – Hosted by Futurologist David Nix – a short that places the character of Governor Nix into a children’s television special. Again, much like in the movie, he comes off as a jerk, as is generally just nasty to the kids that he works with. Most of the jokes fall flat, making this kind of cringe worthy.

Animated Short: The Origins of Plus Ultra – a Pixar animated short about the backstory behind the group that created Tomorrowland, in the style of 50s propaganda. Cool, but not very memorable.

Brad Bird Production Diaries – a set of two production diaries, narrated by Brad Bird from the first day of shooting, and the NASA shoot. Most of the footage is recycled into other features, but the 4 minutes or so of his insight is pretty cool. 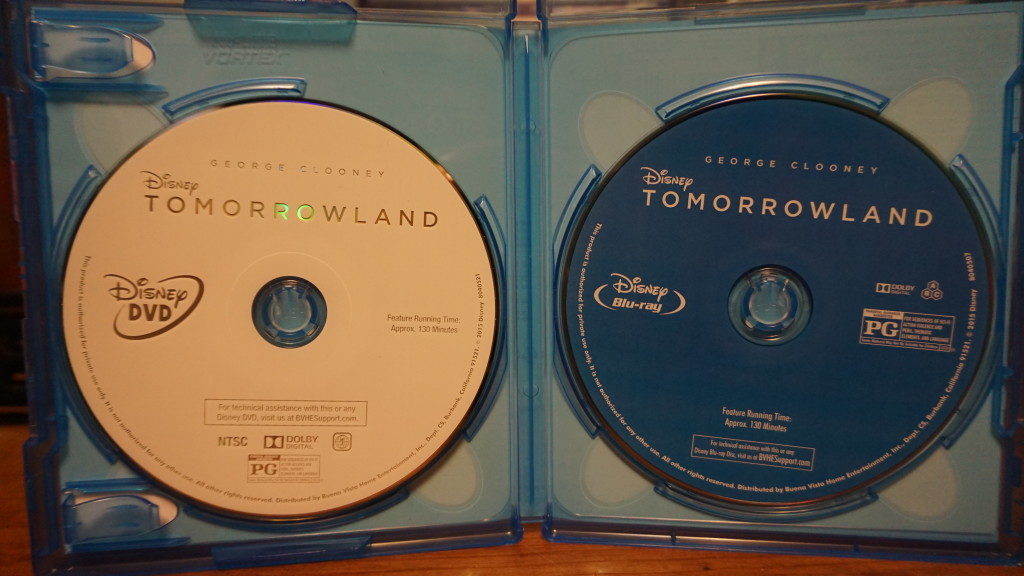 Blast from the Past Commercial – a commercial for the fictional collectible store from the movie. I guess it’s cool, if you like ads.

Deleted Scenes – a collection of several short scenes from the film that were ultimately cut, with length introductions explaining their reasoning. It’s clear why they cut these scenes, as they’re wordy and slow the sequences that they were cut from way down, although we get to see glimpses of Judy Greer’s cut performance, and a little more back story on Governor Nix, which is neat. 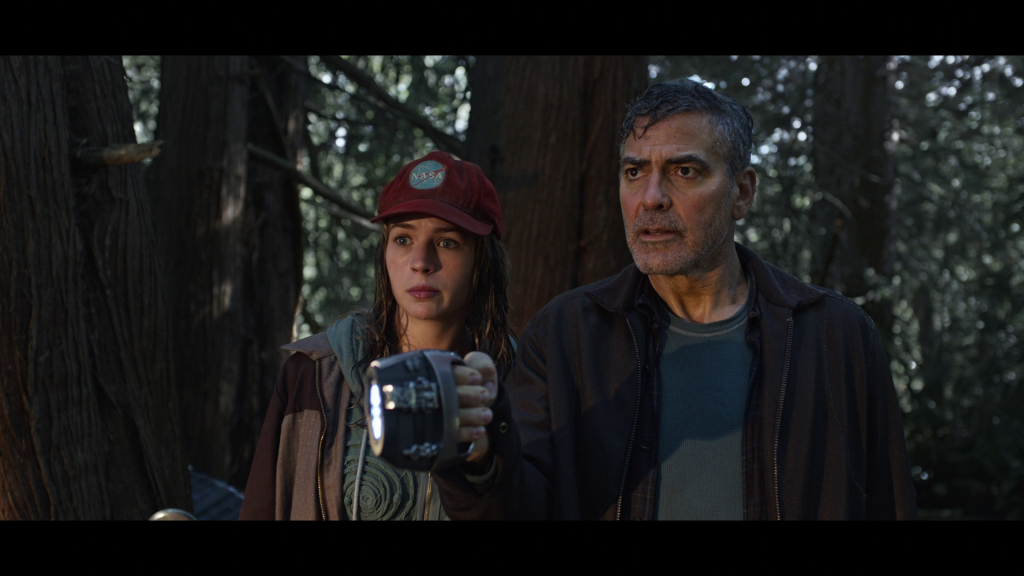 Tomorrowland starts out strong, with a great pace and a good sense of adventure, backed by a set of strong and enthusiastic main cast. Unfortunately, once we leave Earth, the film trips over itself, becoming a bit too preachy as it races towards a climax, where our heroes come face to face with a less than convincing villain. It lacks the confidence and conviction of Brad Bird’s earlier films, which just makes it disappointing. The Blu-ray, however, is technically proficient, with an excellent presentation sourced from a lovely 4K digital master, and a great sound mix. The packaging is nice, but the special features are pretty weak, offering minimal insight into the making of the film. Rather, they focus their efforts on one-off productions and an animated short that do little to generate enthusiasm. Tomorrowland is moderately entertaining at times, but in the end, it just isn’t a good movie.