Nicholas Meyer is a personal hero of mine. As a writer and director, he helped fine tune the script and direct Star Trek II: The Wrath of Kahn, co-write Star Trek IV: The Voyage Home, and co-wrote and directed Star Trek VI: The Undiscovered Country. Without his talent, Star Trek, a huge part of my life, probably never would have been saved, and we would have missed out on 20 years of fantastic movies and television. Even now, he’s been announced as a member of the writing team for Star Trek: Discovery, and as his career with Star Trek continues, Warner Archive gives us a chance to return to where his feature film making career as a director began, the 1979 time travel movie Time After Time. 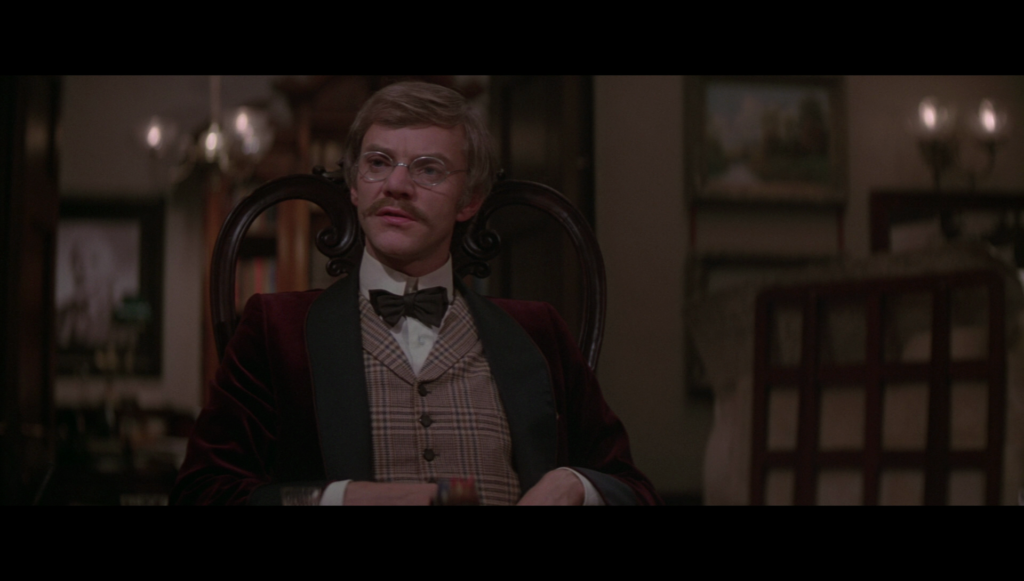 Time After Time follows the story of scientist and fiction writer H.G. Wells, who after developing an elaborate time travel machine in the basement of his house in London must follow the famous criminal Jack the Ripper on an adventure through time after he uses it to escape to the year 1979. Finding the time machine at an exhibit in San Francisco, Wells must enter the vast cityscape to find Jack before he can continue his murder spree. Along the way, he meets and is seduced by bank teller Amy Robbins, an outspoken and highly independent woman, who offers to help in his quest to track Jack. Together, they work to stop Jack the Ripper before he can cause any more carnage in the city, and maybe find love along the way.

Time After Time is an absolute delight, as H.G. Wells, played with poise and civility by the always fantastic Malcolm McDowell, looks upon the city of San Francisco with the eyes of a child. The early scenes in which he revels in the sophistication of ’70s America are amusing, as we look at the fashion, the social trends, and the technology of the day through the lens of a hopelessly lost Victorian age scientist. Much like in Star Trek IV: The Voyage Home, Wells immediately uses his natural intelligence to acclimate to the world he’s been dropped into the middle of. In a smart move by Meyer, who wrote the script, he drops his idealized expectations of the future and charges immediately into his quest to stop Jack the Ripper, played by the delightfully sinister David Warner. His quest leads him straight into a passionate romance with Amy, played by the always lovely Mary Steenburgen, who is smartly used as a character to not only represent the entirety of the modern, independent woman, but also Wells’ guide through the modern world, much in the way that a very similar character would do the same in Star Trek IV. Together, they build a convincing romance, and the chemistry between McDowell and Steenburgen is practically tangible as they get to know each through solving, and later explaining the mystery behind the problem of Jack the Ripper.

Meyer is a smart man, crafting a script that smartly balances the fish out of water story of Wells’ and the manhunt that he leads to find Jack. There is little time spent explaining time travel, and unlike in most time travel movies, no frustrating paradoxes that restrict the fun of the movie. He smartly uses the character of Jack the Ripper as commentary on the state of violence and anger that flows through our society, but doesn’t force it down our throats and rather uses it as a plot device that allows Jack to slip into the shadows. 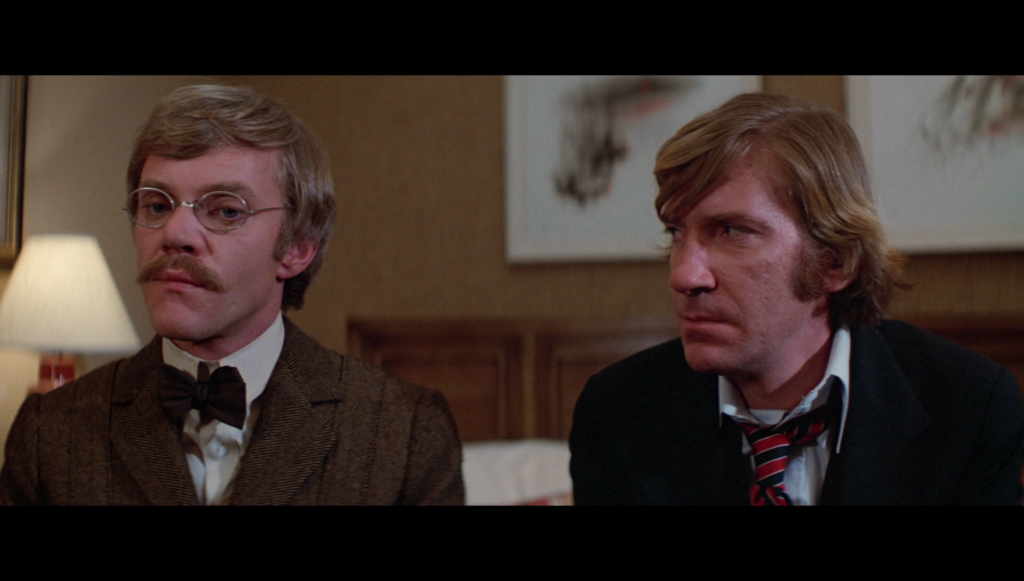 I had very few complaints to note while watching Time After Time, finding amusement in every joke, and thrills in every action scene, where it be a chase through a crowded financial district, or an intense car chase through nighttime streets of the city. One of my biggest complaints, and this goes for every movie I come across featuring him, is that there just isn’t enough David Warner in the movie; it’s not that he doesn’t get good lines, or appropriate development, I just love Warner as a villain. He often doesn’t get enough time to shine however, and this movie is no different, as it focuses almost a little too heavily on the developing of romance between Amy and Wells. Just a little. The only other serious concern is in the film’s score, which was composed by famous Hollywood composer Miklos Rozsa. It frequently, and this is a problem for almost every post-Ben Hur Rozsa score, sounds way too much like many of the fantastic themes from Ben Hur. Each time I heard one, it pulled me out of the movie, and almost disoriented me. 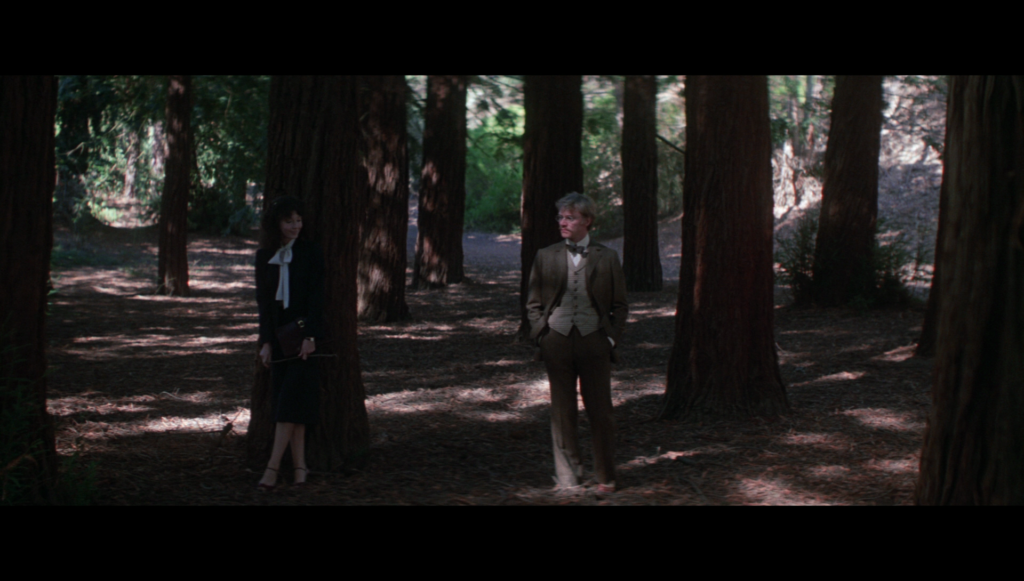 I am a big fan of Nicholas Meyer, and predictably, I had a blast visiting his first movie behind the director’s chair with Time After Time. The movie is a great blend of action, humor, romance, and light introspection into modern society, and comes together in the best kind of way. Its 112 minute run time simply melted away before my eyes, and I’m sure it will for you too.

Time After Time was shot on 4-perf 35mm film using Panavision anamorphic lenses for a final projection aspect ratio of 2.35:1. For this release, Warner Archive has produced a new HD master, presenting the film in 1080p, maintaining the original theatrical aspect ratio. 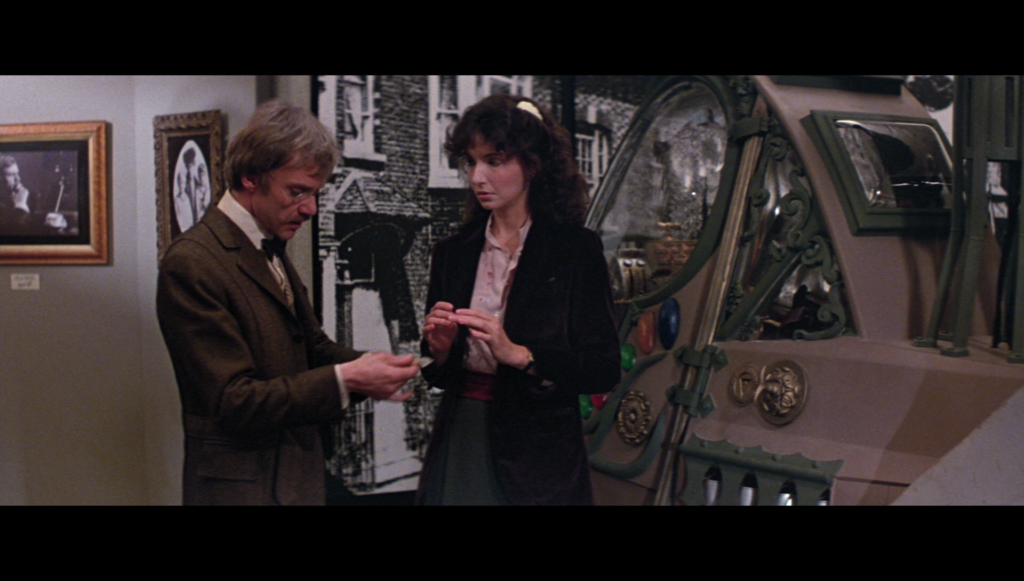 Time After Time, shot by cinematographer Paul Lohmann, comes off as a bit strange looking at times in 1080p. For the most part, the film has great color, a natural looking coat of film grain, and the wonderful softness that is typically associated with 1970’s Panavision lenses. At times however, and perhaps this was intentional, there is almost some sort of odd smearing on the lens that is especially apparently during some of the early wide shots of the film. Beyond that however, the presentation features excellent detail, and the print is absolutely spotless throughout the entire runtime. Outside of the few visual oddities noted, Warner Archive has crafted another excellent HD master of a lesser catalog title. 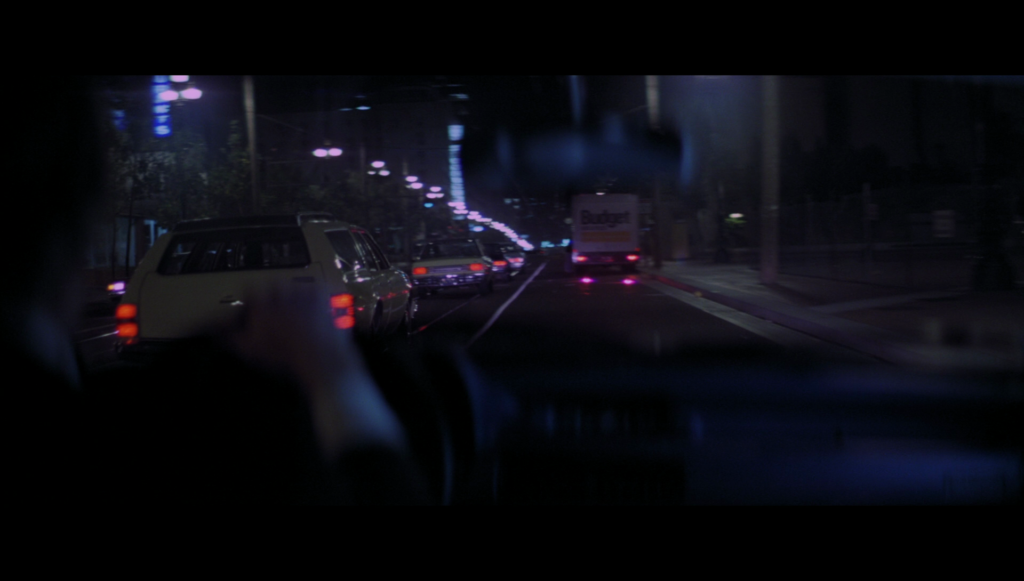 Time After Time is presented on home video with a DTS-Master Audio 2.0 Stereo soundtrack, recreating what audiences heard in theaters in 1979. This new HD track sounds fantastic, carrying the weight of every Miklos Rozsa swell, and every car that zooms down the night time streets of San Francisco. Dialogue is intelligible at all times, and directionality in decent when listened to in a stereo listening environment. A solid stereo track if there ever was one.

Time After Time has been released to home video by Warner Archive in a standard Blu-ray keep case. The front artwork features a lovely night and day based drawing from a previous DVD release, over which an ominous hand holds the stopwatch from the film with a man trapped inside, and a detailed, humorously long tagline for the film. The back artwork features a few shots from the film placed next to a dark, mysterious head shot of H.G. Wells, paired with a few paragraphs about the film, a review quote, credits, and technical info. Overall, a really nice package job from Warner Archive. 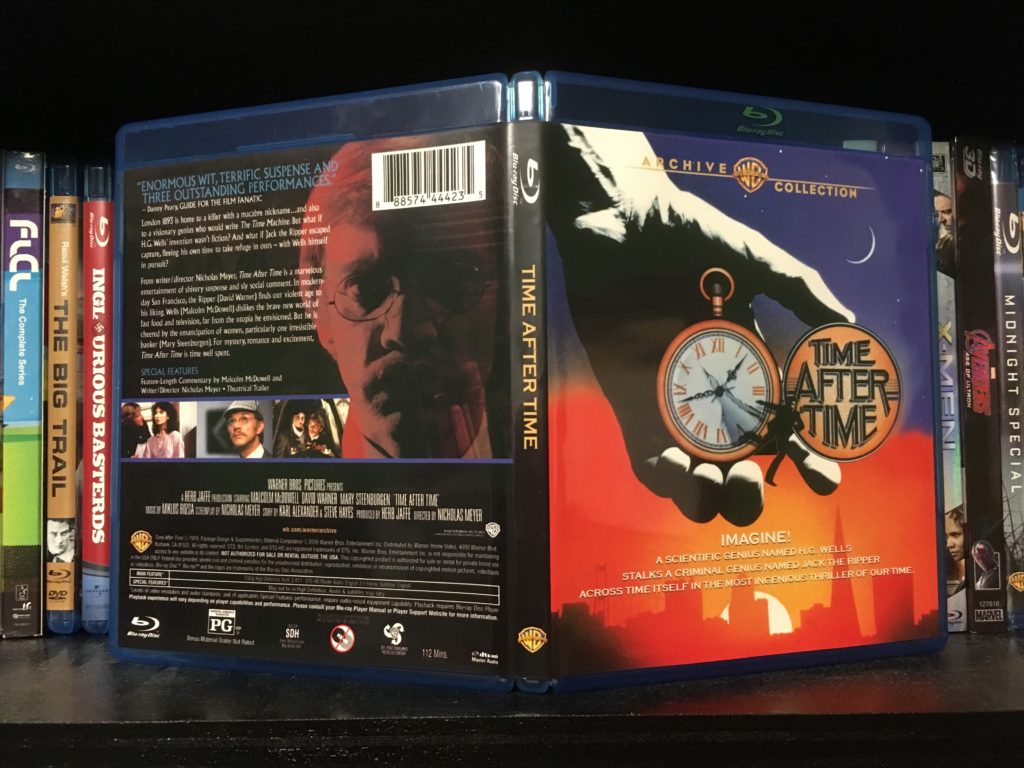 And now, onto the features, of which there are two:

Audio Commentary – a feature length commentary performed by director/screenwriter Nicholas Meyer and lead actor Malcom McDowell. A great commentary, in which they share technical stories, anecdotes from the shooting of the film, and many more great facts about the production.

Theatrical Trailer – the film’s original theatrical trailer, as seen in theaters before its release. 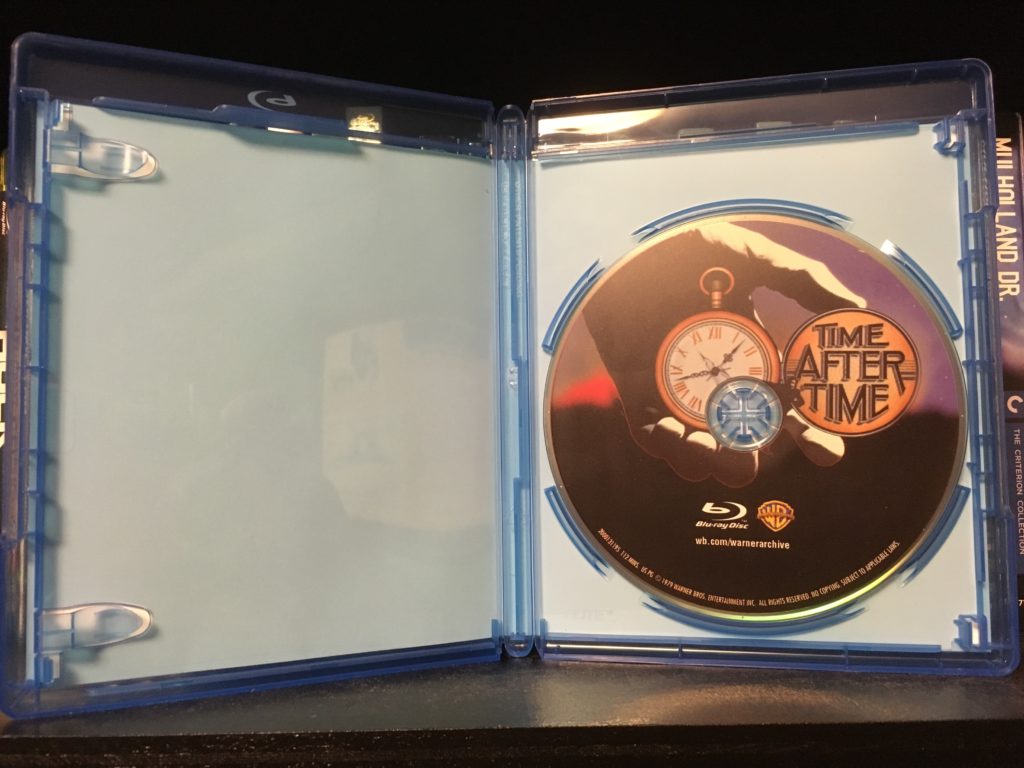 Although it’s a little light on features, especially on new features, it does feature excellent packaging. Stick around for this one if you like a good commentary. 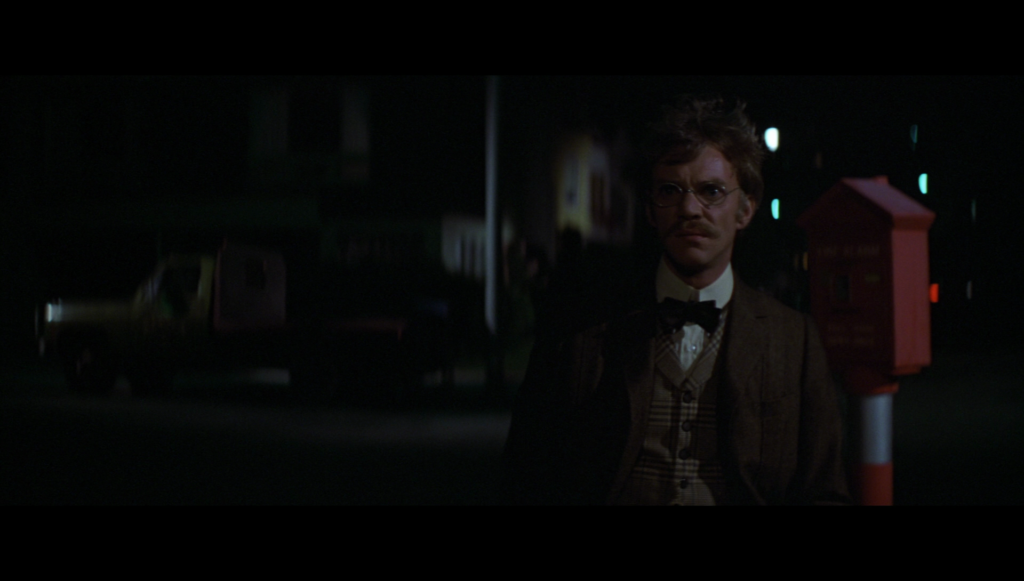 Time After Time is pure escapism of the best kind. It doesn’t dwell too much in hard science, and the script is fun and never fails to entertain. If anything, watching this movie makes Meyer’s later work on Star Trek IV: The Voyage Home seem derivative, as it follows almost exactly the same story beats. The movie is fun, well-acted, and deserves you attention, especially as it gets new life on Blu-ray from the folks at Warner Archive. It features faithful video, competent audio, and adequate packaging. I’d hoped for more than just a trailer and a recycled DVD commentary, but hey, beggars can’t be choosers, especially when the movie is such a fine product. Recommended.