The Tribe is one of the most unique films ever made, and it is coming to the US on Blu-Ray courtesy of Cinedigm and Drafthouse Films on March 8th. It is available from Amazon right now.

For those who are unfamiliar with the story of The Tribe, it is a roughly 2 hour movie which is entirely free of any dialogue due to the use of sign language. The film takes place at a Ukrainian boarding school for deaf students, and every character in the movie uses Ukrainian sign language to communicate with one another. There are no subtitles offered for the viewer, and you must understand the movie solely through the characters’ emotions and actions. It is a visceral watching experience, and one you cannot take your eyes off of. The lack of dialogue forces the viewer to focus on the film and devote all of their attention to the screen, something that is sorely lacking in recent films with the loads of generic action/superhero films catered towards the “ADHD Generation”. This is not a movie you can just throw on in the background and still understand. This one requires focus and attention to detail, and you will be grateful for the experience when you are finished, as it will surely make you appreciate the power of film.

The Tribe was filmed with 100% native Ukrainian sign language speakers, and none of the cast were professional actors. They were all recruited from local deaf groups and boarding schools in the Ukraine, in a process that Director Myroslav Slaboshpytskiy said took “half a year”. This in and of itself is a tremendous achievement, but you would never know that this was an amateur cast. The emotion in every scene is powerful, and it looks as if these students were veterans of the screen.

The story itself is a brutal coming of age tale, and it holds nothing back. It did not get an MPAA rating in the US, but I have to imagine that it would have been a hard “R” or even possibly an “NC-17” based on the content. There is some very realistic violence, sex (lots of sex), drugs, one very uncomfortable scene, and an unsettling tone to most of the film. If you are someone who is easily offended or squeamish, then The Tribe is not for you. However, the realism of the film is based on the director’s twenty years as a crime reporter in Ukraine, and he assured me (look for our full interview in the coming days) that these scenes were all something he had witnessed and wrote about. So, as with most films, scenes that shock us are most often those that are closest to reality. Nobody wants to see realistic violence, but when Captain America kills a “bad guy” with his shield, nobody blinks an eye. This is one film that will leave you reflecting on what you just saw for days and weeks to come, and I think that this is important in today’s society.

Overall, this is one you should not miss. Any true fan of cinema will realize the greatness of this film, even without dialogue. The film is full of masterful, long tracking shots, often spanning minutes. The frames for each scene are also beautifully composed, often focusing on straight or split lines like windows, doors, etc. If Wes Anderson, Quentin Tarantino, and Alejandro Iñárritu had a baby, it would be The Tribe. It is that well done, and this is a masterpiece. Film students will be watching this film for years to come as an important lesson in visual filmmaking. When all dialogue is removed, a true visionary filmmaker will still shine, and The Tribe is an incredible example of how to shoot movie and tell an amazing story with nothing but emotions. It is truly a modern-day classic.

This is a film that is full of beautiful shots and excellent cinematography, and the Blu-ray transfer from Drafthouse serves it well. The color palette is fairly dark and gray, being based in the Ukraine does not make for a very colorful image, and the tone matches the color well. That being said, the transfer is very well done and easily distinguishes grays from blacks and never looks washed out.

Without dialgoue, the visuals are The Tribe’s bread and butter, so they have to be top notch in order to keep the viewer’s interest. I can say without a doubt that this is an excellent Blu-ray transfer. It is not a movie you would put on to show off your new home theater with crazy visuals and colors, but within its own means it is one of the nicest Blu-rays available, even from the acclaimed Drafthouse line of releases.

It is hard to give a movie with no dialogue an audio score, as much of the film is nearly 100% silent. The only consistent noises you get are the occasional audible emotional response from one of the deaf students, or the background and set noises; shuffling feet, a cup hitting a table, or a bird singing in the trees.

As short an audio reference that the movie offers, what is available is very good. The birds singing ring in from the back speakers, as the students move from room to room or walk down a hallway, so does the sound. It is very well done, and presented on an efficient DTS-HD Master Audio track.

As previously mentioned, subtitles are not available for any of the sign language. You can turn it on, but it will only give you descriptive subtitles, i.e. when a bird sings, it will say [Bird Singing]. That is all you have to work with when watching this movie, and even if you are fluent in American Sign Language, this film uses Ukrainian and Russian sign language, so most of our readers will be viewing this sans translation. I truly recommend doing so, as it adds to the overall movie experience.

A solid line-up here, but maybe a few extra features, given the uniqueness of the film, would have been nice. 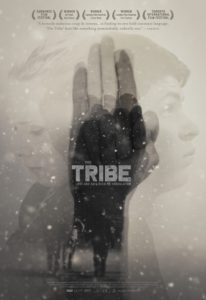 As usual, the packaging from Drafthouse is some of the best in the industry. The Tribe includes:

I wouldn’t recommend it to everyone just based on the content and the unique way the film was made, and it certainly is not for the mainstream audiences, but for cinephiles (like myself and many of our readers) I would say that this is one worth picking up. I really enjoyed this film, and it has earned my first “5 star” rating.

The Tribe is a highly recommended Blu-ray release.