As a child, I was terrified of closed-spaces and darkness, for it was in these environments that the demonic and disturbed horrors of my imagination would thrive. I knew I wasn’t alone in having these types of fears; it’s quite a natural instinct to become uncomfortable in face of the unknown. I believe the true masterpieces of film come in the form of stories that take advantage of our more primal emotions and uncertainties; stories that don’t really discriminate their audience because all of us share that core terror of a foreign, nameless entity that only seeks to harm us. The Thing is a prime example of such a film, and it’s chilling premise and phenomenal practical effects still hold up incredibly well to this day.

John Carpenter’s The Thing (1982) is a remake of the 1951 film The Thing From Another World, which itself is based on John W. Campbell’s novella, Who Goes There? Arguably, Carpenter’s adaptation of the story is the most horrific and visually disturbing. The film follows a group of American scientists stationed in an Antarctic research base. After an unsettling encounter with several Norwegian researchers from a nearby station, the Americans come into possession of a seemingly docile dog. However, the situation becomes increasingly disconcerting as the Americans discover the charred remains of a grotesquely disfigured human at the inexplicably abandoned Norwegian base, and the dog is caught slaughtering the American dogs in their kennel after shifting into the form of a unidentifiable monster. It is soon realized that there is a shape-shifting extraterrestrial creature stalking the research station, and anyone could be ‘the thing’ in disguise. 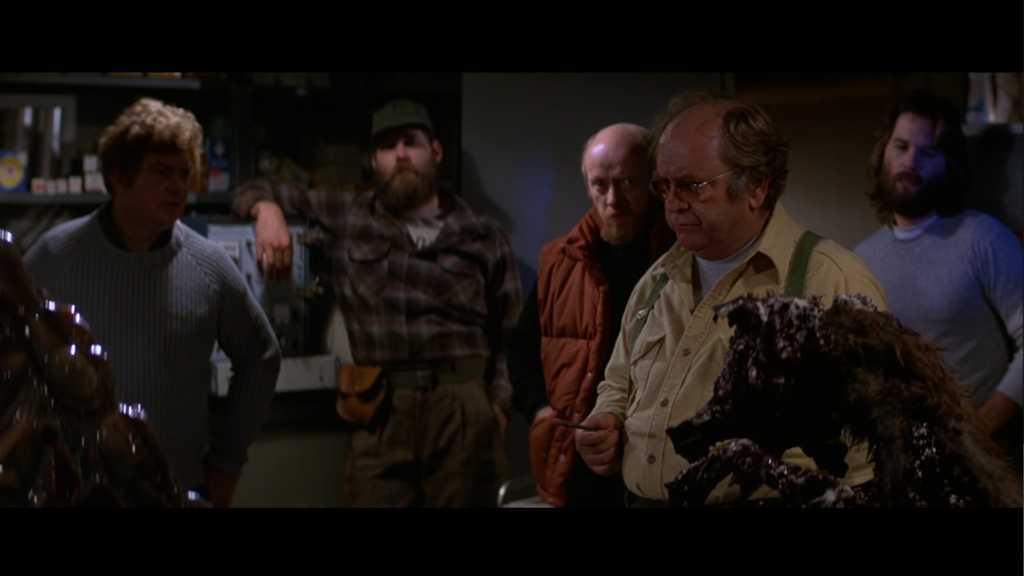 Aside from the brilliant practical effects used in the film, which brings the ‘the thing’ to life in an unusually disturbing fashion, Carpenter also creates an extremely paranoid and claustrophobic atmosphere in the film, which is only enhanced by the fact that each of the characters are distinct in their personalities. There are no run-of-the-mill unintelligent teenagers in this horror film; the victims are educated and non-naive, and their predicament feels significantly more dire.

Upon it’s initial release, the film did not achieve much box-office success or critical acclaim, likely due to competition from other science fiction films of the day such as E.T. The Extra-Terrestrial and Blade Runner. Since then, however, the film has transcended even it’s cult following into a full-blown sci-fi classic, and is widely considered a staple of the genre.

As is somewhat typical of low-budget films of the late 1970s – early 1980s, the picture quality of this release is good, but not necessarily benchmark-level excellence. The cold Antarctic setting is actually quite visually stunning at times, but a lot of the movie does have a more dull tone in terms of color. One could argue that this adds to the atmosphere of the film, and I agree to a certain extent, but I would have appreciated a tad bit more vibrancy. Also typical of films from this era, there is a fair amount of grain present. The amount of detail seen inside the research station, in characters faces, and in ‘the thing’s’ many different forms is satisfactory, though overall clarity in the film as a whole is not exceptional. The transfer really can be considered quite good, though I am curious to see the new Shout Factory transfer to be included in the collector’s edition of the film in September. We will post a comparative review of the two when the time comes. 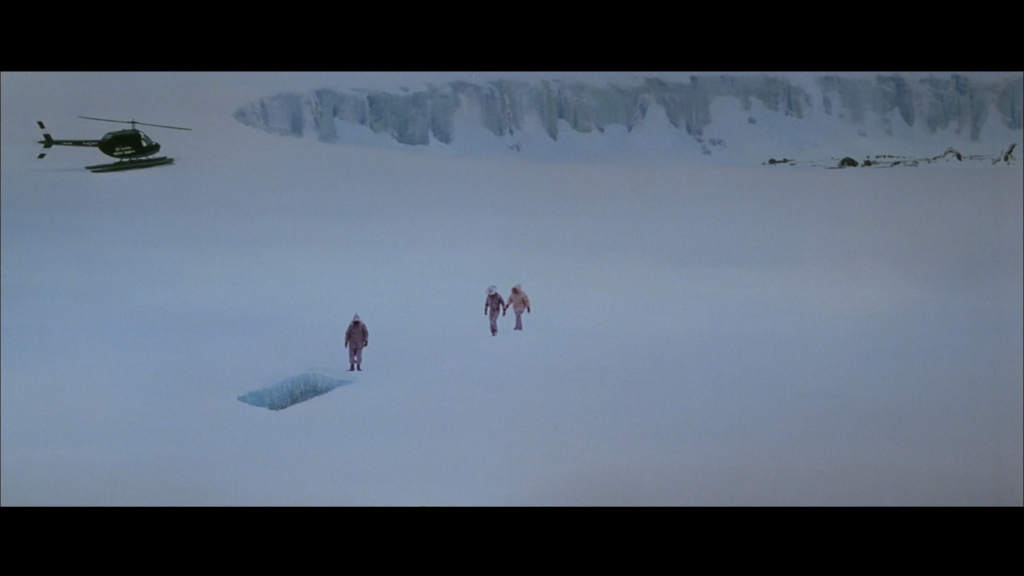 The audio present in The Thing is a mix of a spectacular score and some less-than-stellar sound effects. Truly, I feel one of the highlights of the film in general is it’s soundtrack. From the very beginning we are greeted with the haunting theme, which is used throughout the movie at more pivotal points or to enhance the paranoia factor, and I feel it’s simplicity acts in a similar way to, say, Jaws, in terms of just setting the stage for the events of the film to unfold. The DTS-HD MA 5.1 soundtrack is rich and clear where it counts, and even has an adequately punchy bass to complete the spectrum of sound. Gun shots are crisp, dialogue sounds well-recorded, and flamethrower blasts sound true. The only gripe I really have is some of the effects of ‘the thing’ itself. Creating sounds for a creature that doesn’t actually exist certainly is a tough task, but it is unfortunate that it’s howls have an almost compressed-sounding aspect to them. They aren’t quite as clear and life-like as I feel they could be. That isn’t to say that are subpar throughout the film, however. Sometimes, you may feel the hairs on the back of your neck perk up as the creature lets off bloodcurdling screams and ungodly roars. Overall, I would consider the film an example of great sound design, with only minor objections here and there. 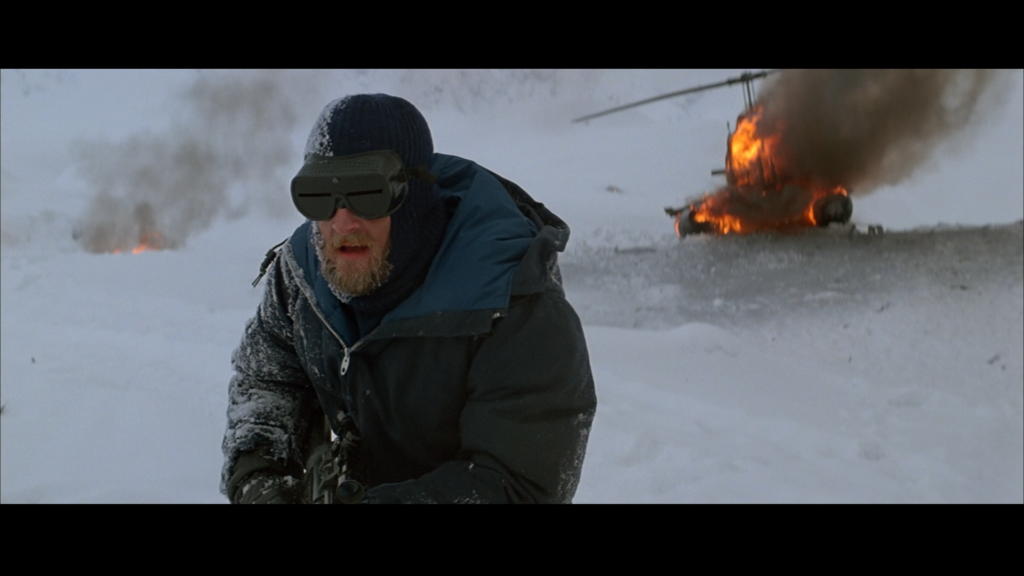 The Thing features very basic packaging; the theatrical release poster image as a cover, no slip-cover, and barebones inserts in the form of an advertisement. The image I do like; it has style and personality unlike a lot of generic covers featuring main characters that has become more typical of recent releases. Also unlike many recent Blu-Ray releases, the case features sturdier plastic without the money-saving cut-outs that result in overall flimsier packaging. The banner stating “The Perfect Hi-Def Movie Experience” on the front is a bit tacky, but I guess a result of the release being a bit older and more in the “Blu-Ray is new and exciting!” era of the format. Only a single Blu-Ray disc is included; no DVDs or digital copies here. 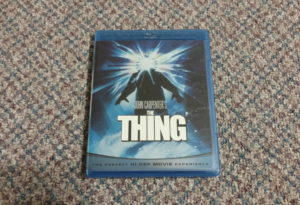 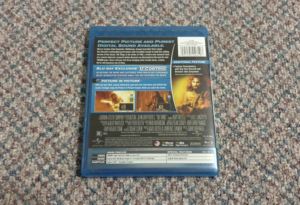 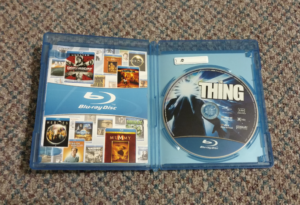 Unfortunately, the special features of this release are extremely limited. You get a commentary featuring director John Carpenter and lead actor Kurt Russell (both these men are very talented and are definitely worth listening to), and access to U-Control. So, you’ll get some access to a few behind-the-scenes tidbits and facts, but nothing to write home about. As stated before, there is a Shout Factory collector’s edition of the film being released in September. Featuring two discs, I assume there will be significantly more extras included. A ‘making of’ documentary of The Thing does exist, and I hope this will be included as well in the release. 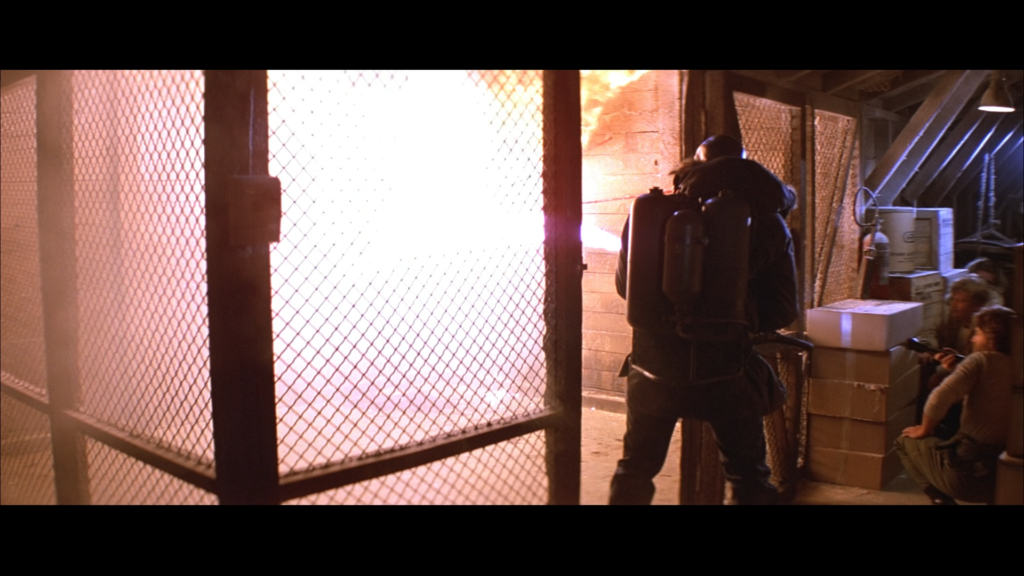 The Thing is a terrific film, and I highly recommend it to all science fiction, horror, and monster movie fans. This release is currently the highest quality home release available, but due to it being so barebones, and the fact that a collector’s edition is set to be released in under three months, I can only recommend this particular version to people looking to view the film immediately. It can be purchased very inexpensively on Amazon.