When I had first heard of the release of The Other Side Of The Door, I’ll admit the first thing that came to mind was “Oh, great! Another horror movie.”  Despite thinking that this was the run of the mill horror fare, I had definitely garnished an interest in checking this film out because I’m always in new horror projects; especially one that’s leaning toward being more psychological thriller than typical horror.

The Other Side Of The Door tells us the story of Maria, played by Sarah Wayne Callies (Into The Storm, Prison Break, and The Walking Dead). After her young son is killed in a tragic accident,   and while grieving for her loss, she learns of a ritual that can be used to allow her to communicate with him, letting her to finally say goodbye to her child.  However, after ignoring a sacred warning, she upsets the balance between life and death and things take a turn for the worst for her and her daughter.

As you saw in my introduction of this review, I wasn’t too thrilled about seeing this when I was originally given the opportunity to review this.  However after watching what Maria and her daughter Lucy went through after selfishness kicked in and Maria ignored all warnings, I could not take my eyes away from the screen.  This movie has several instances that will make you ask “What in the hell is going on here?” but in a good way.  I say that it’s in a good way because at some point in this movie you will encounter something that will get under your skin and will probably make you shiver in discomfort.  I think what really got to me is that this film is centered around a child who had unfortunately lost his life and his immediate family members.  While I didn’t have the opportunity to watch this with my fiancee tonight, I certainly cannot wait to sit down with her, have all of the lights turned off and sit back and watch her reactions as terror unfolds on Maria and her family.

The Other Side Of The Door is an extremely dark movie.  That being said, the fact that most scenes were covered in the darkness did not detract from the at home viewing experience. Everything looked amazing and that definitely added to the creepiness that was expected from a film of this nature.  I was able to perfectly make out things as the scenes portrayed on my television.  I think this film is definitely going to be one to watch together with the fiancee simply because of the freaky undertone that is consistent only because of the picture that’s presented.  One part that really stood out to me with this was the scenes that showed what appeared to be a ghoul of some kind.  It almost felt as if it was a nod to the earlier horror films and their use of stop motion-esque movement for the undead or evil creatures.

Featuring a DTS-HD Master Audio 5.1 track, The Other Side of the Door packed just enough punch to knock you off of your chair during every jump scare. An extremely important part of any horror film which is often overlooked is the audio. The subwoofer action is always played low to instill a sense of dread, and the surround speaker action is so integral to ensure that the jump scares coming from off-screen hit you just right. Overall, the mix was presented very well, and I never found myself adjusting the volume, except for the few times where I hit the remote accidentally as I screamed like a child. I was very impressed with the audio presentation from this lower budget horror movie, and 20th Century Fox certainly put a lot of effort into this release, which is always nice to see from the big studio giants who often ignore their smaller films.

The Other Side Of The Door is released just like any other Blu-ray combo pack, where upon its first run, it includes a slipcover.  However I would like to take a brief moment and point out the amazing artwork that came with this release.  Both front and back artwork for this film do a fantastic job at conveying just how creepy this movie is.  Included in this package is the following items: 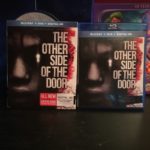 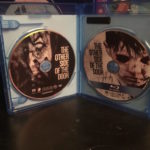 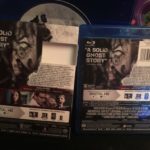 This release comes with some really interesting special features that help you to dive into the story a little more and get a greater understanding of the work that went on behind the scenes to create this film.  The special features are:

Holy hell was this an amazing ride.  While incorrectly assuming that The Other Side Of The Door was going to be anything like your everyday horror film, I am certainly happy to have had the opportunity to watch this.  It’s been quite a long time since I had seen a horror movie that had managed to truly get under my skin.  Constantly keeping a dark theme in every  scene, and carrying an overly creepy undertone as the story moved along; this film certainly was no disappointment by any means.  If you are into the horror films that mess with your mind and those that have these in-your-face kind of jump-scares, then The Other Side Of The Door is one that you need to get for your personal library. I highly recommend this Blu-ray release.