Terrence Malick was hard at work on the latest of a long line of passion projects. Paired with Steven Soderbergh, a legendary director in his own right, Malick had worked on and completed a script about the life and times of (in)famous revolutionary Che Guevara. Yet, nearly two years passed without securing definitive funding, the reality of the financial difficulties the film was having began to wear on the director. When interest began to emerge surrounding his long-gestating screenplay based on the life of John Smith and Pocahontas, Malick made his move. He left the Che Guevara project in March of 2004 (which would eventually become the Soderbergh epic Che in 2008). Shooting over three months on location near Jamestown’s historical site, Malick’s film would blend the historical and mythological in its telling of the relationship between Pocahontas and John Smith as well as that between the settlers from across the sea and the Powhatan natives. Upon its release in 2005, The New World polarized many critics and moviegoers as Malick’s refusal to be explicit in conveying the plot and ratonale in a manner familiar to audiences. Notorious for his near-endless tinkering and editing of his films, it came as little surprise that such a divisive film would see an extended cut released to home video with New Line Cinema’s 2008 Blu-ray release. Between this extended cut and the salve of time, The New World‘s reputation has steadily improved since its release. With Malick continuing to become ever more experimental, The New World represents the beginning of his transition into the latest phase of his film making journey. Now, the Criterion Collection has produced a stunning release of Malick’s The New World, featuring three different cuts: the 2005 theatrical cut, the rarely seen “first” or “Italy” cut (referred to as such due to its limited release in a 2-disc set of the film in Italy), and the 2008 extended cut. How does this release measure up to New Line’s 2008 Blu-ray? 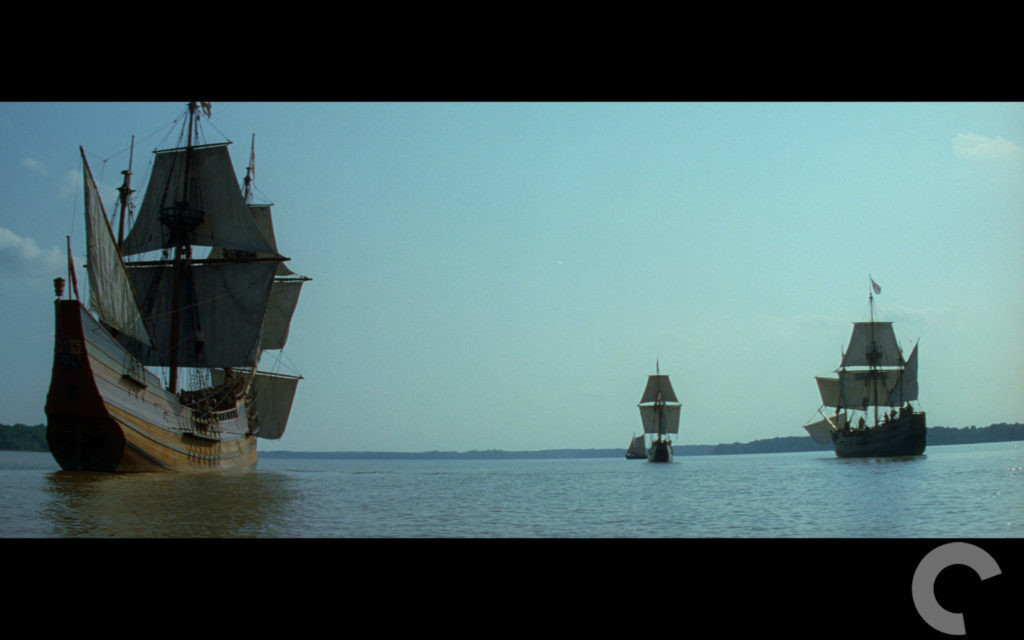 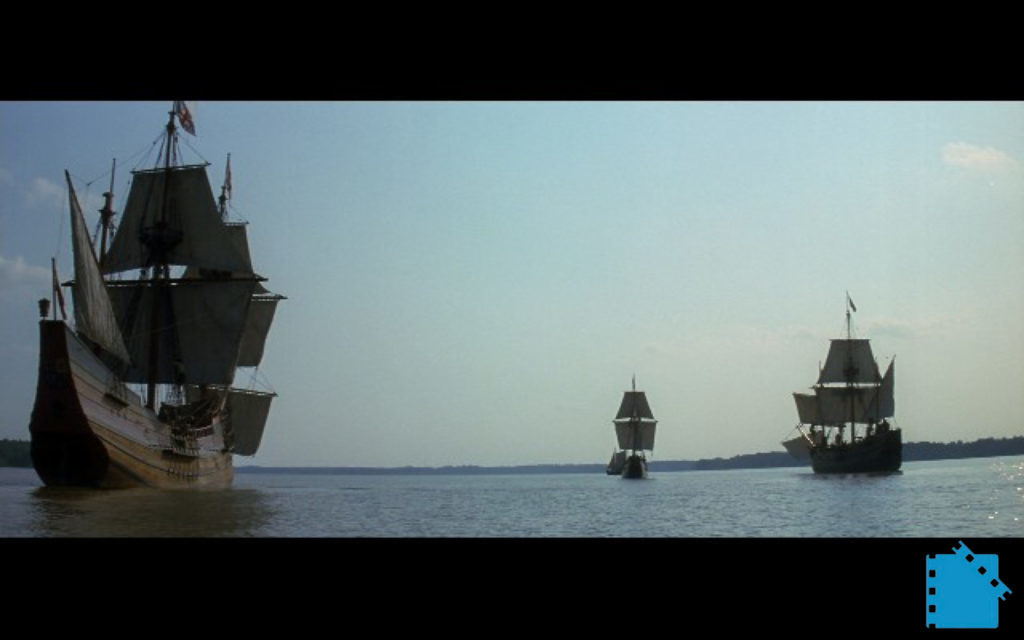 Let’s get something out of the way before we dig in, though: this is a Terrence Malick movie. Most famous directors have a “thing”, the stylistic choices that say “oh, this must be directed by _______”. For some, it’s simple: M. Night Shyamalan has his twist endings, Steven Spielberg has his “Spielberg Face” shots, Neil Breen destroys his laptops. Malick’s calling card is both easy to pick out and is still somewhat amorphous. His films have that dreamlike quality to them, and there’s always a fair share of poetic voiceover, meandering characters, and knowing looks shared between two lovers, but the experience of a Malick film can’t be reduced to any of these parts anymore than you can say Kubrick films are Kubrick films because they’re shot with unerring precision. It’s part of the experience. The New World is a Malick film, and that means it’s an experience. His films are not for everyone, there are conceits he expects you to accept before you watch. Be aware. Now, let’s dive in! 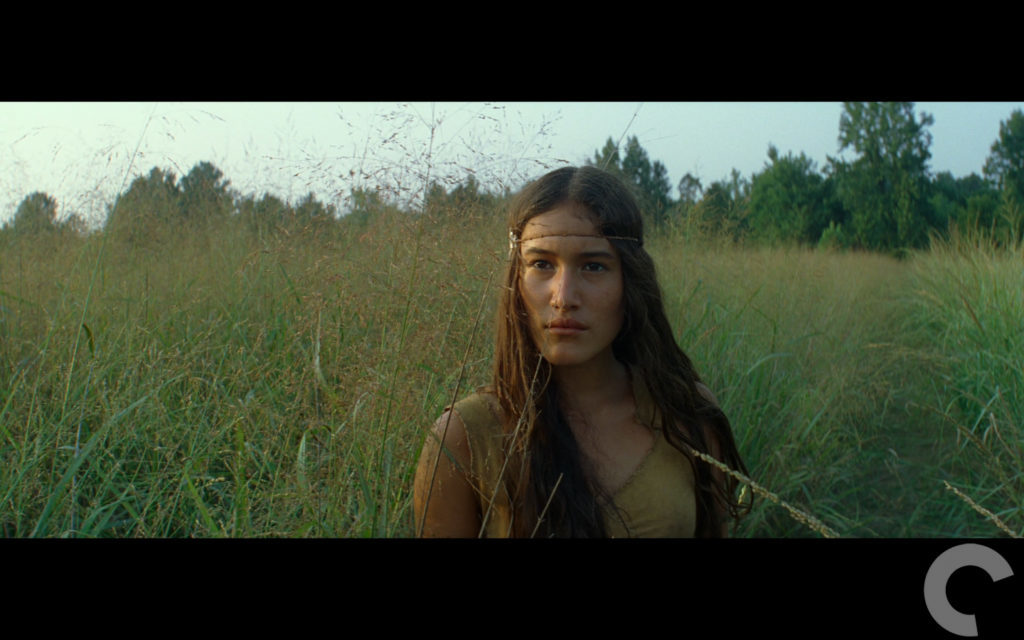 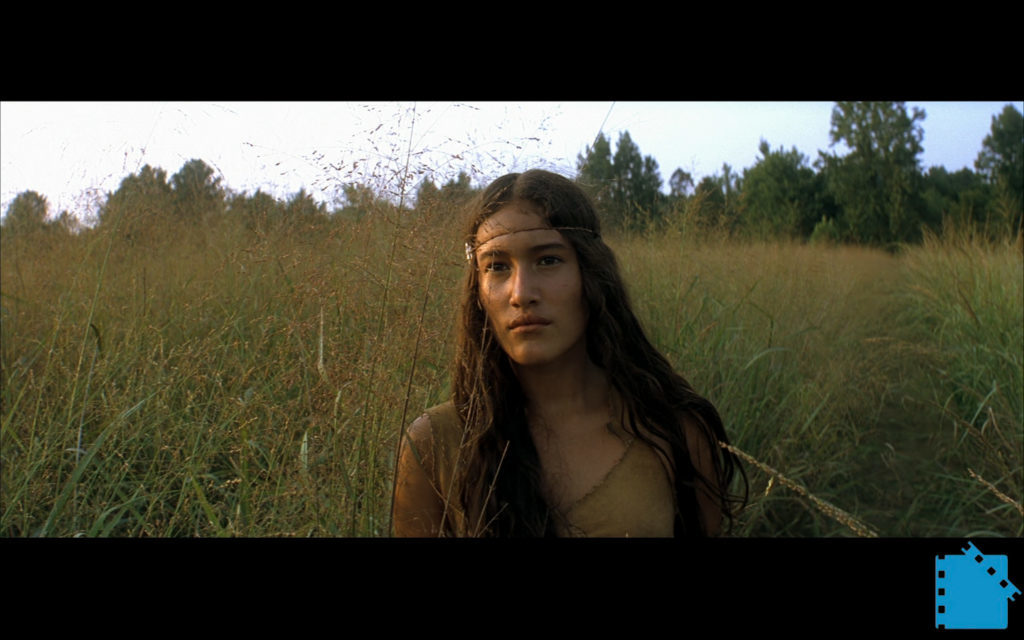 Depicting, with some dramatic license on loan from tales woven throughout the ages, the founding of the Jamestown colony and the meeting of Pocahontas and John Smith, The New World is simultaneously a peeling back of the veil over which must of early American history suffers under while still refusing to exit the half-truths inherent in the telling of old stories. In contradiction we find John Smith (Colin Farrell), destined for the noose at the beginning of the film for talking mutiny during the voyage, but spared by the forgiving and prudent Captain Newport (Christopher Plummer). Smith’s fortures quickly shift as he is placed in charge of the expedition destined to make contact with Chief Powhatan (August Schellenberg). There, Smith is nearly killed before the intervention of Pocahontas (Q’orianka Kilcher). Smith’s time as Powhatan’s captive is highly formative, as Smith not only comes to appreciate and even adore the native’s way of life, but he also forms a deep bond with his savior, Pocahontas. When Smith is eventually returned, he is thrust into the leadership of the struggling Jamestown. Smith’s arrival back with the English begins a journey from which both he and Pocahontas will never fully recover. Famine and betrayal sting Jamestown’s uneasy existence, and when Powhatan realizes that the English do not mean to leave, tensions boil over. Smith himself comes face to face with the most difficult of all choices: following his head or his heart. His dreams will cause Pocahontas to veer from her own life into one of inexorable historical value and her relationship with newcomer John Rolfe (Christian Bale) will set the stage for a journey she could never have expected. 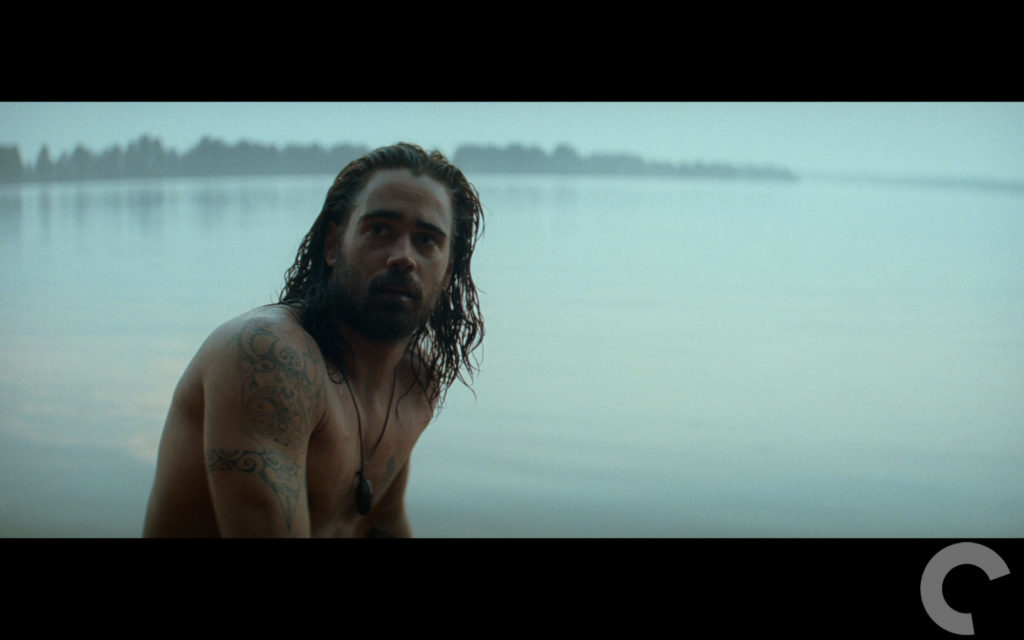 As I’ve mentioned above, Malick’s film is an uneasy alliance between the different interpretations of Pocahontas’ life and journey as it has been told and retold throughout the ages. Accuracy and indulgences bounce off each other with a carefree beauty that could only be balanced by a talent like Malick’s. The New World was highly divisive, especially after how well received Malick’s previous, comeback film (The Thin Red Line) was, but Malick’s extended cut does come across as the definitive viewing experiences. Few Malick films would work if not allowed to fully explore their own wandering commitment to the sort of narratives that his films tend to explore, and while many of the additions do not highlight specific scenes not present in the theatrical or first cuts, the inclusion of the scene where John Smith saves a Powhatan tribe child from drowning is a welcome addition to a crucial point in the story’s development. On the other hand, the extended cut is the only of the three to feature the “chapter” cards separating the film into distinct acts or movements. As far as I’m concerned, they’re a distraction at best and a detriment to most viewers, but they’re also indicative of Malick’s emerging “later” style. The first cut is somewhat of a mixed bag when compared to the theatrical and extended cuts. With its length somewhere between the other two, it’s great to use this as a comparison point for the extended cut and as a curiosity, it’s a fun addition. On a whole, though, the extended cut provides the strongest narrative experience. The more time that Farrell and Kilcher get to spend together on screen, the better off we all are. It’s no surprise that this is the cut that has seen two high definition releases. 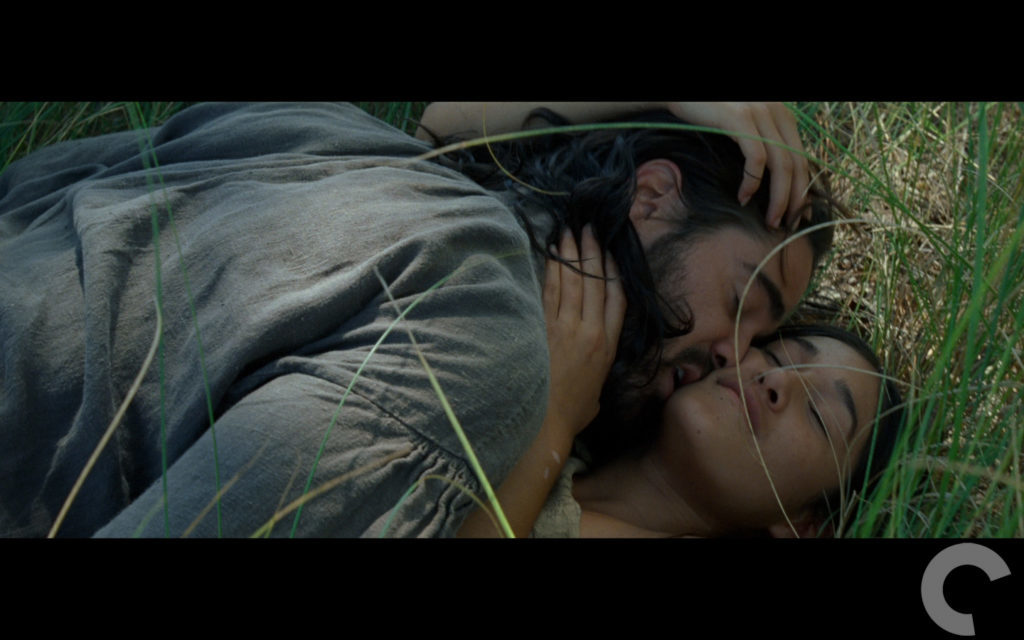 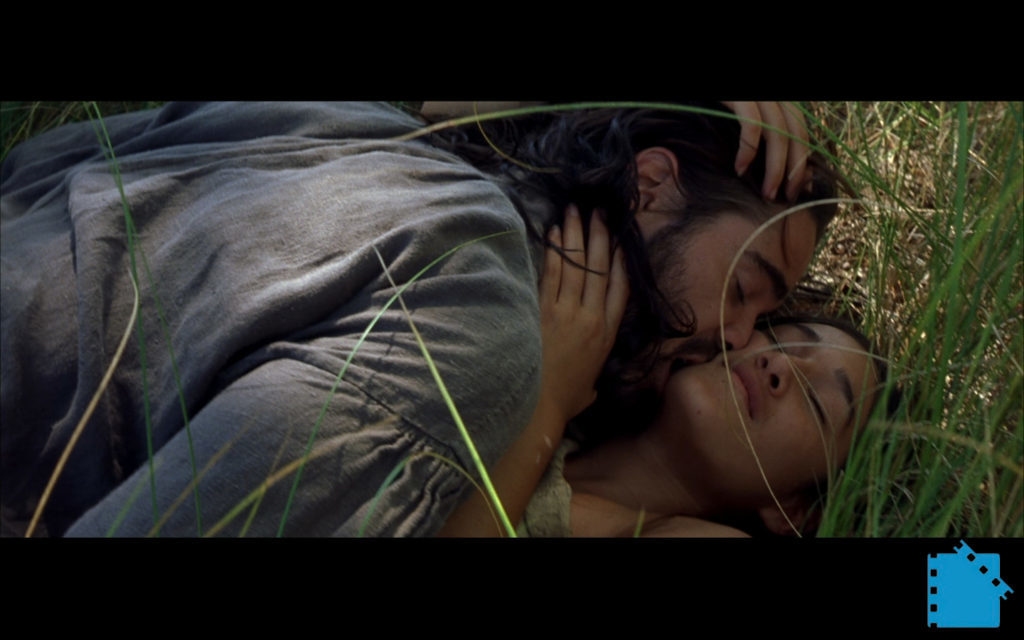 We’ll be focusing primarily on the extended cut here, as it is the point of contrast between this release and the New Line Blu-ray released in 2008, and is also the subject of a substantial restoration effort undertaken by the Criterion Collection under the direction of director Terrence Malick and cinematographer Emmanuel Lubezki. Going back to the negative provided by Lubezki himself, a brand new 4k scan was undertaken especially for this robust release. The results are striking on their own, if less dramatically so when compared with previous releases. The Criterion release is a stunning piece of cinema presented in the finest possible conditions and you’ll be awestruck if this your first time seeing the film on your home high definition display. The slightest appearance of film grain exists only as a reminder to the viewer that this beauty was shot on film (a good portion of which on the rare 65mm format) . I do not give the rating of 5 (a perfect score) lightly, delivering a strong home viewing experience with film as source material requires a master’s touch, but this presentation is absolutely flawless. That’s not to say that the previous release was less than stellar, the 2008 release was a stunning work in its own right, but you can’t argue with Criterion’s results. Color balance has been restored from minor oversaturation in some scenes in the New Line release, and any other minor issues lingering from New Line’s release are fully resolved. With Lubezki and Malick supervising this transfer, we now have the definitive visual release of the film and a demo-worthy presentation for A/V enthusiasts. 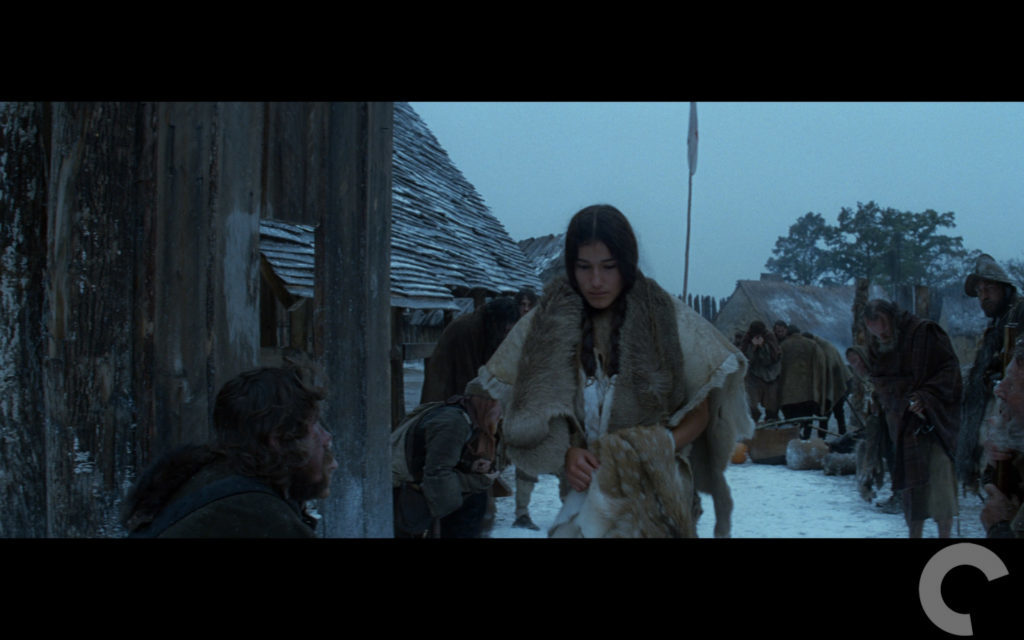 Unlike the different sources for the video, this release of the New World comes to us with the same audio option across the differing cuts. Where the previous New Line release opted for a Dolby TrueHD 5.1 mix, Criterion transitions to its preferred DTS codec with a strong if front-loaded DTS-HD 5.1 presentation that is used across each cut. Malick’s films tend to focus on breathy conversations that can easily dip below the standard listener’s comfort zone and this mix does an admirable, if somewhat blunt job, in making sure the audience doesn’t struggle. Conversations are loud, surprisingly so, and front loaded to a strong extent. That’s not to say they’re overwhelming. This was the case to an extent on the New Line mix as well, but it’s slightly more pronounced here. The score, one of Malick’s strongest (a mix of James Horner’s original score with other pieces mixed in, most notably Wagner’s Das Rheingold) surrounds the viewer and wraps them up in the grandeur of the moment, enhancing the viewing experience considerably. It’s a strong, if not remarkably different, mix to pair with the stellar visual presentation. 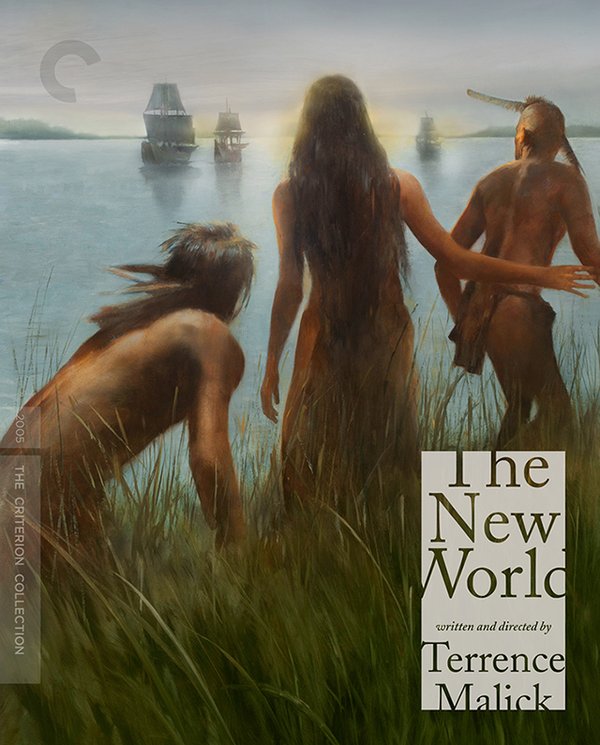 This is a sumptuous release from the Criterion Collection, remniscent of their packaging and material for other releases like Scanners, Seven Samurai, and Persona. A deluxe slipcover encases the three discs and the accompanying booklet, all covered in new artwork commissioned for this release and painted by Robert Hunt (whose work has also been featured on the Criterion releases for Picnic at Hanging Rock and Autumn Sonata). From the Criterion catalog: 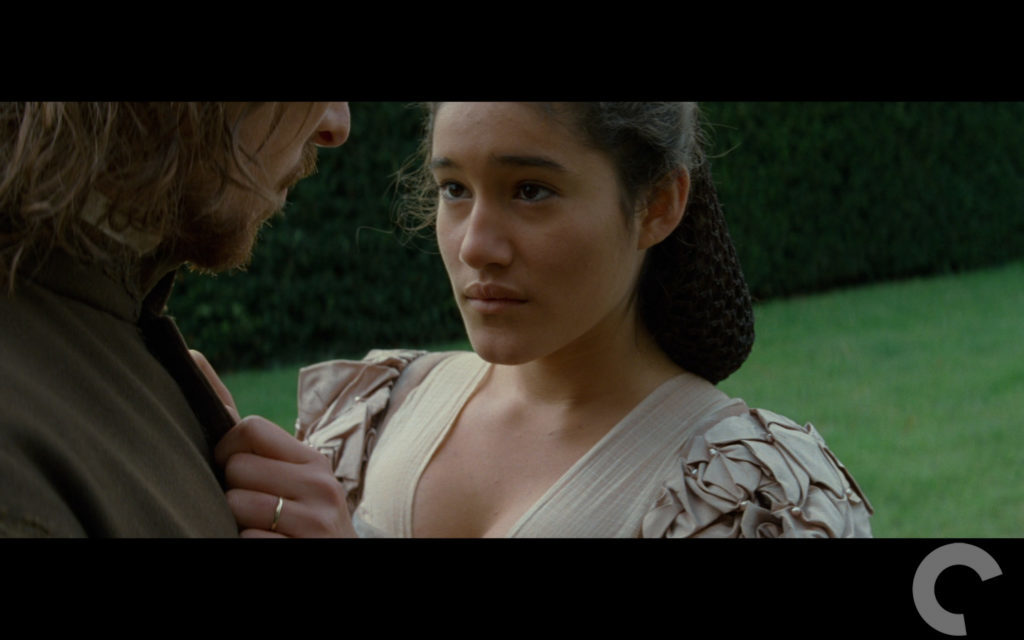 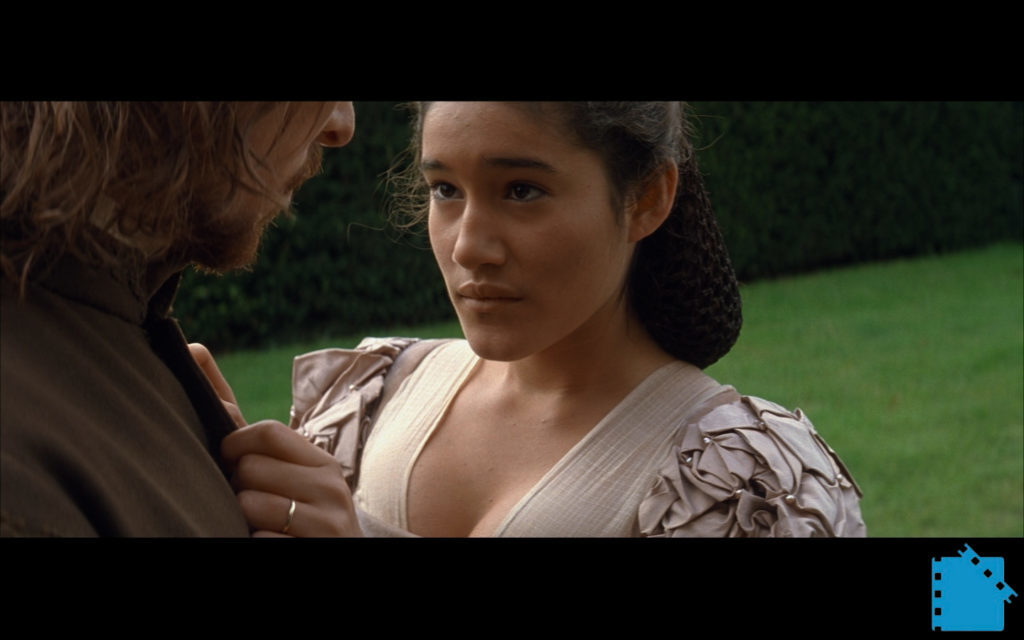 Perfect releases aren’t the sole purview of the Criterion Collection, but few can ever match their flair and style when they put their minds to it on a release. Terrence Malick’s The New World is given the five star treatment in nearly every metric for this release, leaving fans of the film with only the slightest of complaints to be measured. Surely, the only one I could manage myself while going over this release was the fact that the extended cut was the only cut of the three available here to receive a 4k restoration, but considering the time and effort needed to produce such a magnificent piece, one must be somewhat understanding. If you do not already own The New World but are a fan of Malick or this film in particular, then this release is an absolute “must buy”. If you’re already an owner of the New Line Blu-ray from 2008, I can give a more measured recommendation. If The New World is a film you like but do not love, then maybe you’ll be satisfied with the pleasing if bare-bones release New Line put to market. However, if you hoping to see the film in all its glory with an astounding array of special features to accompany it, then now’s the time to upgrade. This one is a marvel.