Ridley Scott may not be the king of the Sci-Fi/ Space Genre, however he may be one of the most notable directors within it. With films like Blade Runner, Alien, and Prometheus behind him, it came as no surprise when he chose to direct the brand new summer blockbuster and Oscar Nominee The Martian. Based on the book of the very same name, The Martian delivers a fresh take on an old genre.

The film has a lot to offer and almost defies any genre altogether. It brings tears, a wide range of suspense, and a good deal of laughter as our protagonist comes to grips with his fate. Our story starts with the crew of the Ares III mission gathering samples on Mars when an incoming storm is upgraded and is arriving a lot sooner than the crew had anticipated. The crew tries to gather to the M.A.V. (Mars Ascent Vehicle) to launch immediately and leave the surface of Mars. In the process of leaving, Mark Watney (Matt Damon) is hit by a piece of debris and the crew is left with no choice but to presume him dead and leave. Mark Watney wakes to find himself alone and stuck on Mars with no way of getting home unless he can “science the shit” out of it and find a way home. Much of the film is told through the process of a video journal that Watney keeps and through the use of humor we are right there with him every smart-ass step of the way. 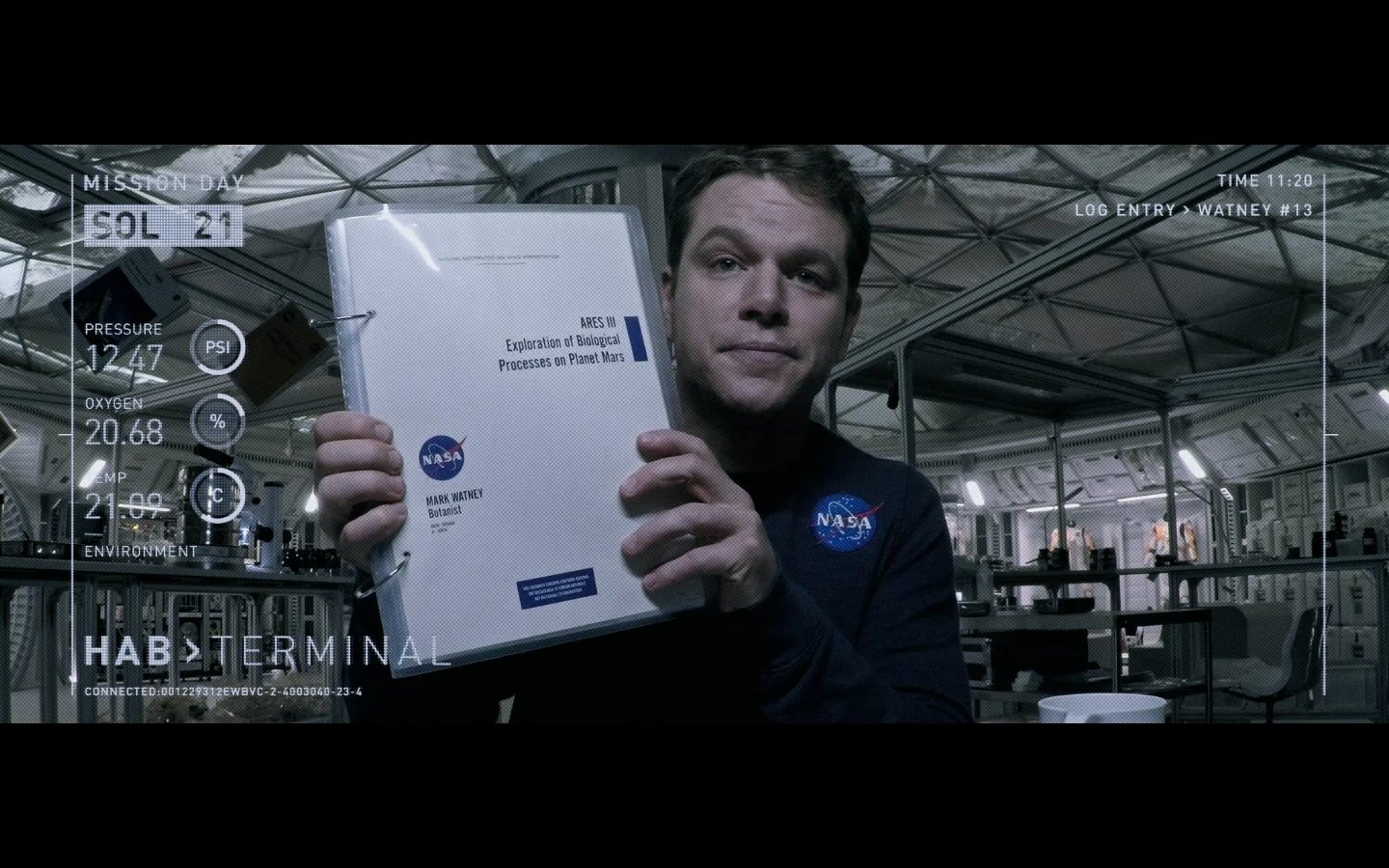 The movie itself was shot using a combination of GoPro Hero4 Cameras set throughout the HAB (Mars HABitat) and Red Cameras giving the film a seamless yet rather personal feel. You are meant to connect with Watney immediately and remain connected throughout the entire experience. The transfer to Blu-Ray is stunning however with the movie being as big and breathtaking as it is you really are left with this feeling that your television needs to be eight times bigger. Other than size-envy, the picture is absolutely beautiful and even on my ancient Samsung it comes across bright, vibrant and epic.

We all know it can happen. You get a movie home, pop it in, and it clearly was not edited properly for home viewing. That is what I was forced to think when I began to watch the Martian. For at least the first twenty minutes of the movie I kept adjusting the volume up and down trying to compensate one way or the other for the storm versus the dialogue. They were fighting for their lives but I was fighting for an audio level I could be happy with. That being said, once the storm was over I really did not notice anything like it again. I won’t say it wasn’t annoying but it definitely did not ruin the movie experience.

The packaging does not really do the movie any favors of impressing the buyer. The version I purchased (Blu-ray + Digital HD) came in the standard slipcover with UV sticker and all (you know – the one that is impossible to remove). Single disc with the recyclable case logo on the inside. I do hope they release another version of the movie. It was definitely enjoyable enough to buy some sort of special edition. My suggestion would be some sort of minimalistic steelbook, but that’s just me. 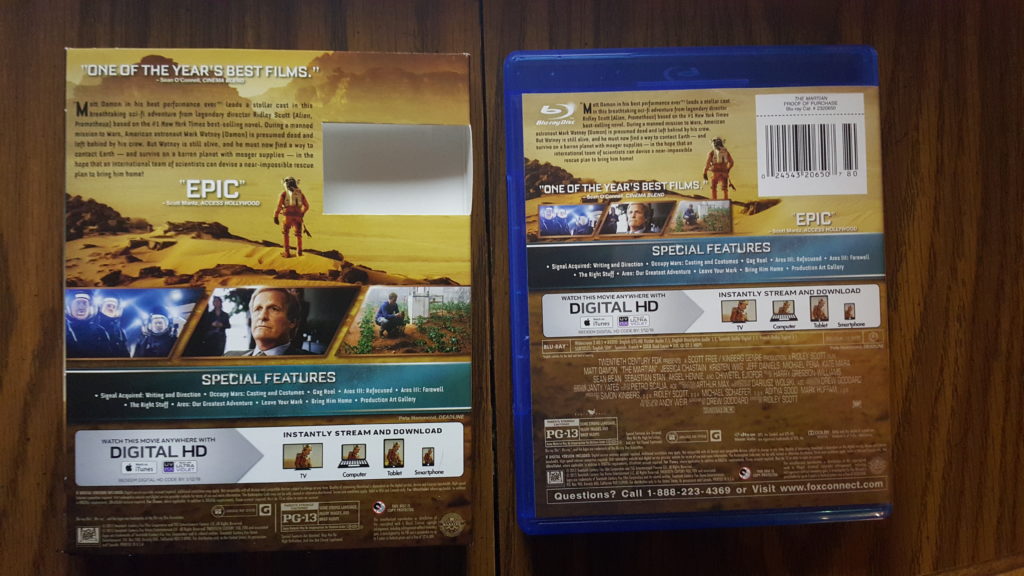 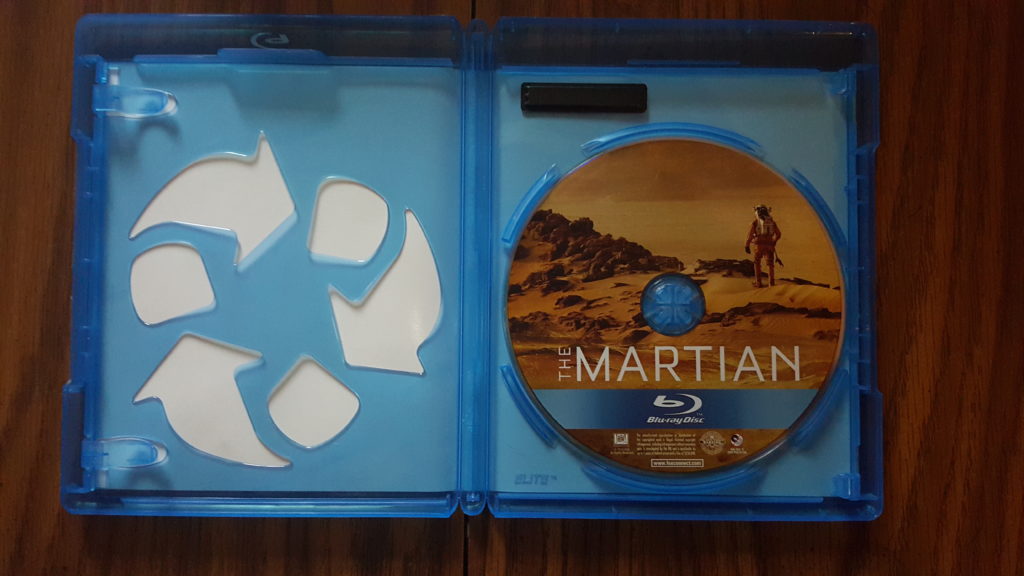 Consistent with the tone of the movie, the special features are full of smart ass remarks and quips from Watney. They really seemed to go the extra mile to tell the tale of the surrounding events of The Ares journey through faux documentary shorts. The Special Features are as follows: 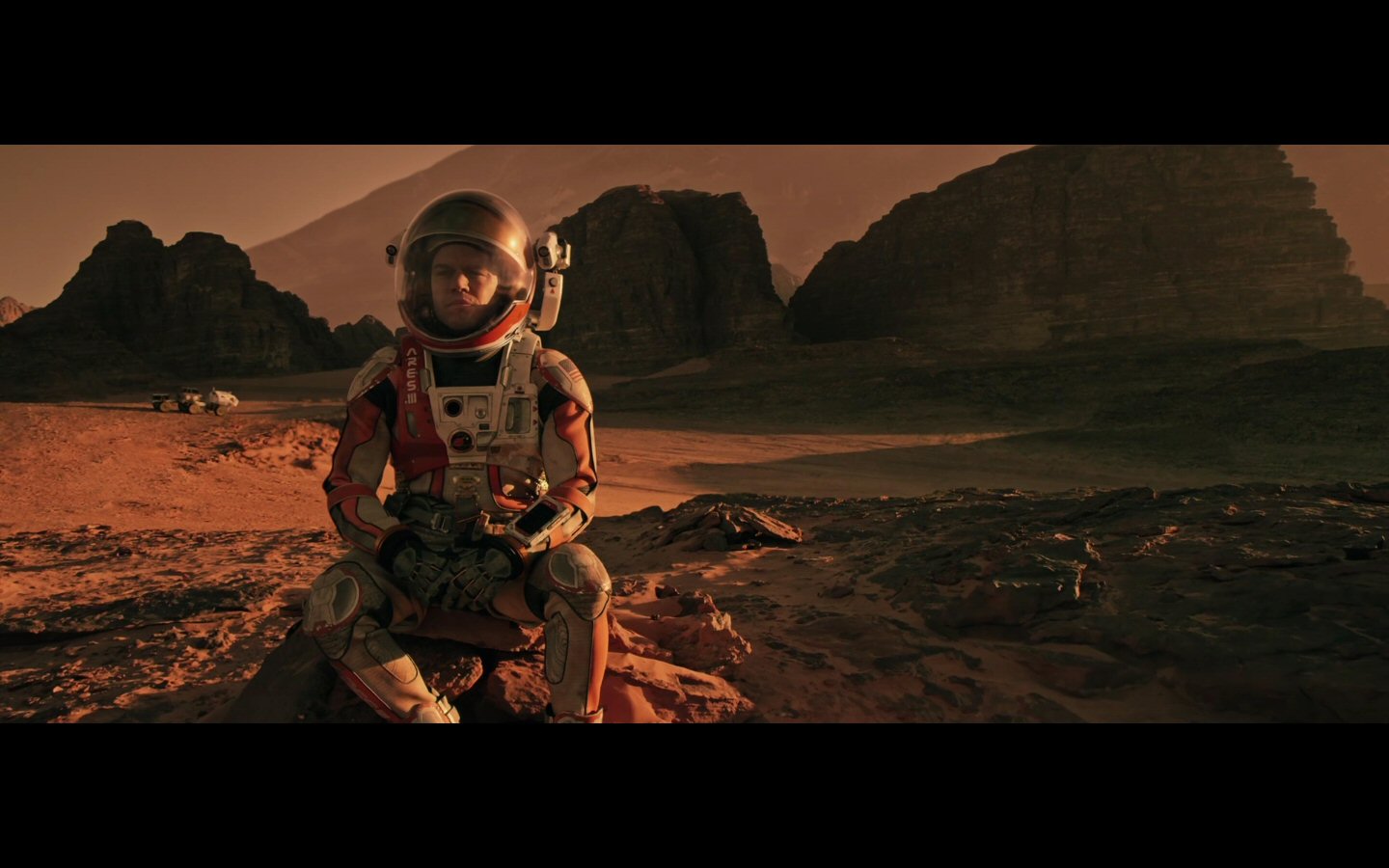 If we are judging this movie purely on its enjoyment factor, I cannot recommend it enough. However, the second time around the laughs do not hit as hard and it starts to feel as if they relied too heavily on them. Overall, Matt Damon’s Performance is absolutely spot-on perfect casting for the role of Mark Watney. In fact, in the special features they brag about how they ended up casting all of their first picks for each role a rarity to say the least. This is a great movie overall and I will enjoy watching it for many viewings to come. You can purchase this edition HERE and the Blu-ray 3D Version HERE.