The Lobster is a movie that I can only describe from end to end as a nightmare. In just under two hours, it presents a tragic, but deeply comedic story, supported by intentionally wooden and awkward performances, a score that often contrasts the mood of the on screen action, and a dark script that presents a twisted, dystopic view of humanity’s future. It is the kind of movie that at many moments can be considered a funny movie, but once the ride is over, you realize that it wasn’t a fun movie. 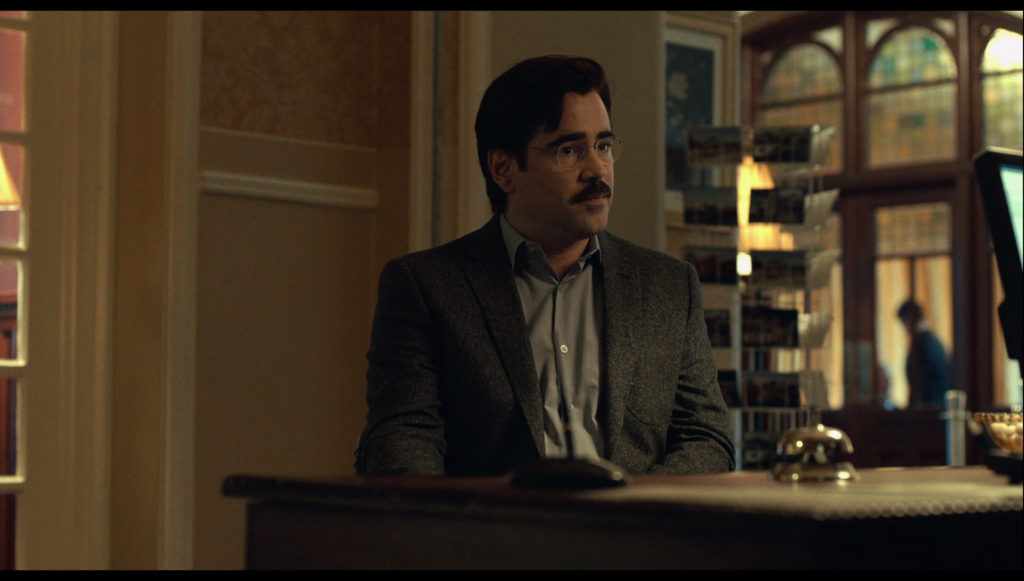 Directed by Greek filmmaker Yorgos Lanthimos in his English language debut, The Lobster is a tough movie to describe without ruining just what makes it work. Simply put, the movie takes place in the near future, in a post-modern society in which partnership with another human is mandatory. If you lose your partnership for any reason, you are taken to a state run hotel, in which you have 45 days to find a new partner, or else you are transformed into an animal. The film tells the story of a man named David, who at the beginning of the film, has been left by his wife. Accompanied by his brother, who has become transformed into a dog, he enters the hotel with hopes of finding a mate. During his stay, he makes many friends, but also enemies, and eventually escapes the hotel, joining a group of rebels, both politically and romantically charged in their goals, who lead him on an ambitious adventure in their attempt to destroy the system that has exiled them.

The Lobster is a slowly paced, intentionally uncomfortable movie. Over the course of two hours, it throws you into a fascinating world, full of crazy ideas concerning romance and social etiquette, and how the law is centered around them. It keeps on introducing new ideas right up through the film’s ending, without wasting much time on explaining anything that it tosses your way. It makes you feel as if you are constantly catching up to where the film is, and by the time we as viewers figure things out, it throws something new at us. David’s story is disorienting, and for some, including myself, it will take more than one viewing to really grasp the world that has been built through this film. 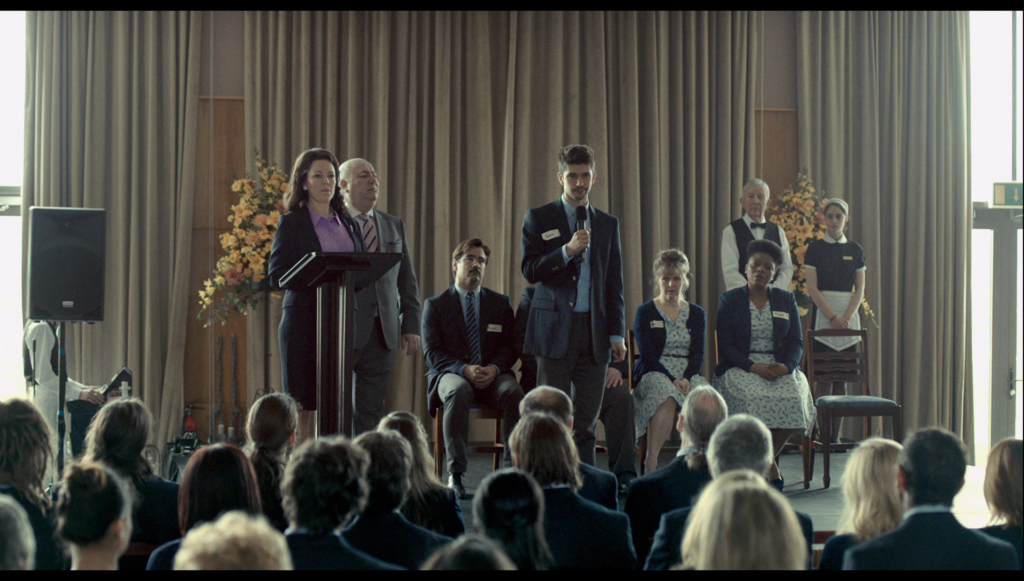 In keeping with the film’s themes of social awkwardness and stifled romanticism, The Lobster is acted from start to finish with a series of intentionally wooden performances. David, played by Colin Farrell, is a man who is constantly subjected to tragedy and general weirdness in his quest to find peace and yet he talks in small, broken chunks of dialogue, and shows little emotion outside of a key sequence in the film. Farrell steps into the role of a broken, bewildered man, and owns the role, delivering one of the strangest, but most satisfying performances of his career. On screen, he is accompanied by a wonderful supporting cast, filled out with talent such as Ben Whishaw, who is delightfully amusing as a manipulative, unsympathetic man who stops at nothing to make his match work, and John C. Reiley, returning to a character that he often portrays on screen; the sympathetic, incompetent guy that people tend to lean on, much to his disadvantage. Also filling out the cast are the predictably cold, but entertaining Lea Seydoux, and in a performance that is perfectly paired in its wooden-ness and awkwardness with that of Farrell’s, Rachel Weisz plays the romantic interest of our leading man. Her character is subjected to all kinds of horrors, and yet she plays the role at times like a statue, resulting in some fantastic humor later in the film. 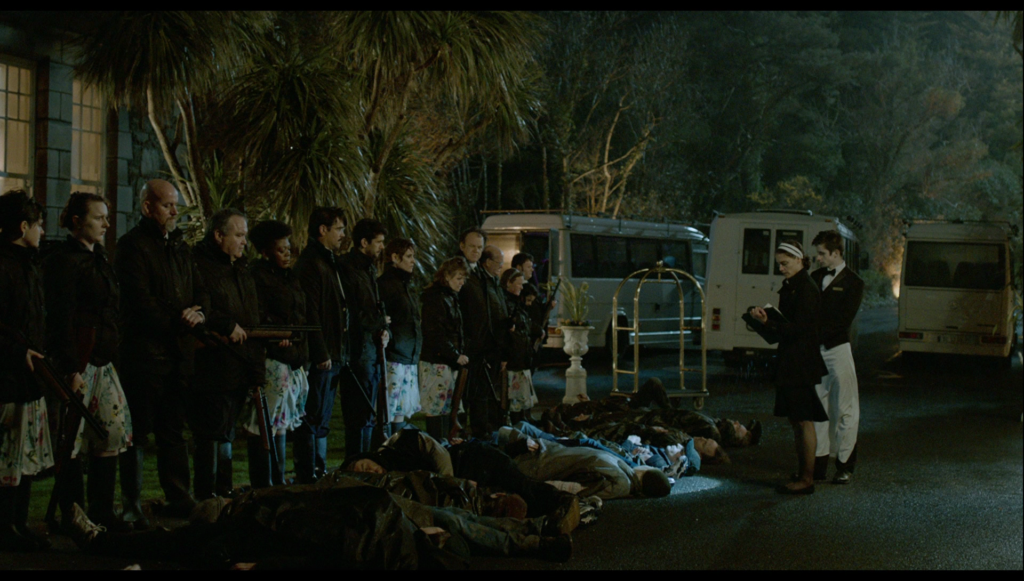 The Lobster is at many moments humorous, especially when certain sequences are paired with the often times contrasting score, which consists of various pre-recorded pieces of classical and other forms of music. The script is funny, but not fun, especially when paired with the film’s editing, which lingers on many a shot, giving us time to really think and feel the gravity of each situation. The cinematography is cold, grey and lifeless, as if to emphasize the dystopia that lingers beyond the walls of the film’s settings.
On my first viewing of The Lobster, which I saw with a friend at a local independent theater, we both agreed that The Lobster is a disturbing, sometimes funny, but overall nightmarish movie. On revisiting it for the Blu-ray release, that opinion still stands strong. The film is strong in its execution and makes for a fascinating viewing experience for the most part, full of interesting characters, especially under the lens of satire on the modern fascination with relationships. 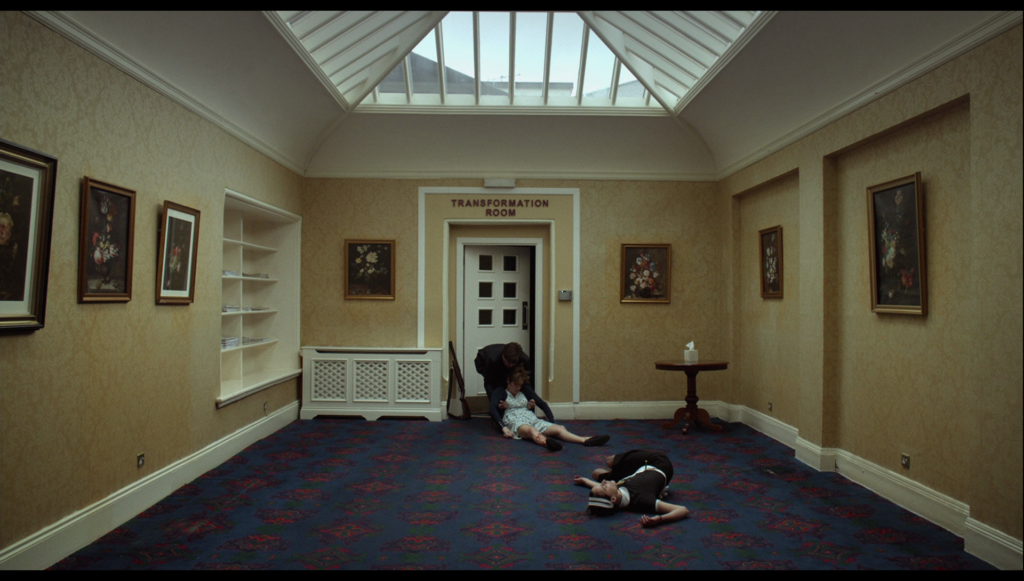 The Lobster, having seen it in theaters, is not a particularly good looking movie. Colors are often minimal at best, favoring greys and browns over any other color. There isn’t a whole lot of contrast in the image, although this traces back to the source photography. The digital image has been layered over with artificial film grain, and while it looked sharp when I saw it in theaters, it looks murky and messy in 1080p. Instead of providing a filmic image, it obscures details in wide shots, and looks unnatural. Close ups feature alright detail, but there is an overall softness to the visual presentation of The Lobster that looks less than stellar. 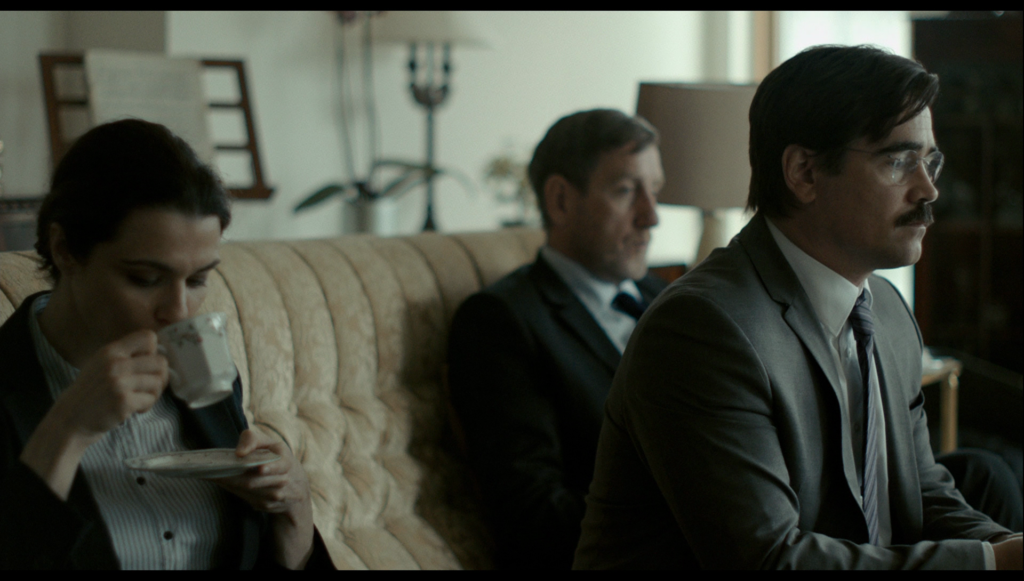 The Lobster is presented on Blu-ray with a 5.1 DTS-HD Master Audio surround sound track. The soundtrack is somewhat limited in its scope. The movie is a dialogue driven film, that primarily takes place in enclosed areas that don’t exact open themselves up to expansive sound design. The film’s dialogue and music are restricted mainly to the front speaker spread, and there is little to no subwoofer activity whatsoever. Surround activity is minimal, but quiet when present. Overall, not exactly the bleeding edge in sound design, but appropriate for the type of film we have here.

The Lobster, released to home video by Lionsgate Home Video, is packaged in a matte finished slipcover, and standard blue keepcase. The case and the slipcover feature identical artwork on both the front and back sides. The front artwork is a rather minimal composite of all of the film’s main characters just sort of scrunched together in the middle, with the title, the names of the two leads, and some quotes against a white background. The back art features three frames from the film, credits, a paragraph about the film, and technical specifications for the movie. It should be noted that the slipcover is some sort of off white, while the case art is set against a traditional white color. Overall, not a very appealing set of artwork. 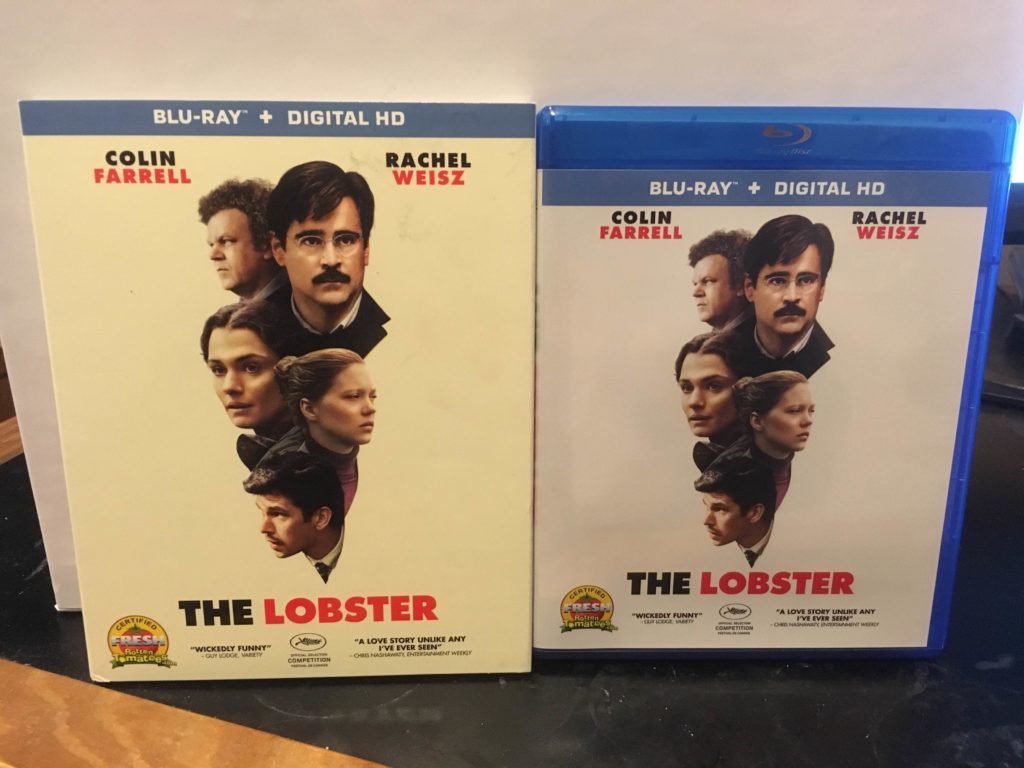 The Lobster features only one special feature:

The Fabric of Attraction: Concocting The Lobster – a 22 minute behind the scenes piece on the overall story of the film, in which the themes are explored by the cast and crew in detail, as well as the work of Yorgos Lanthimos through the context of this movie. 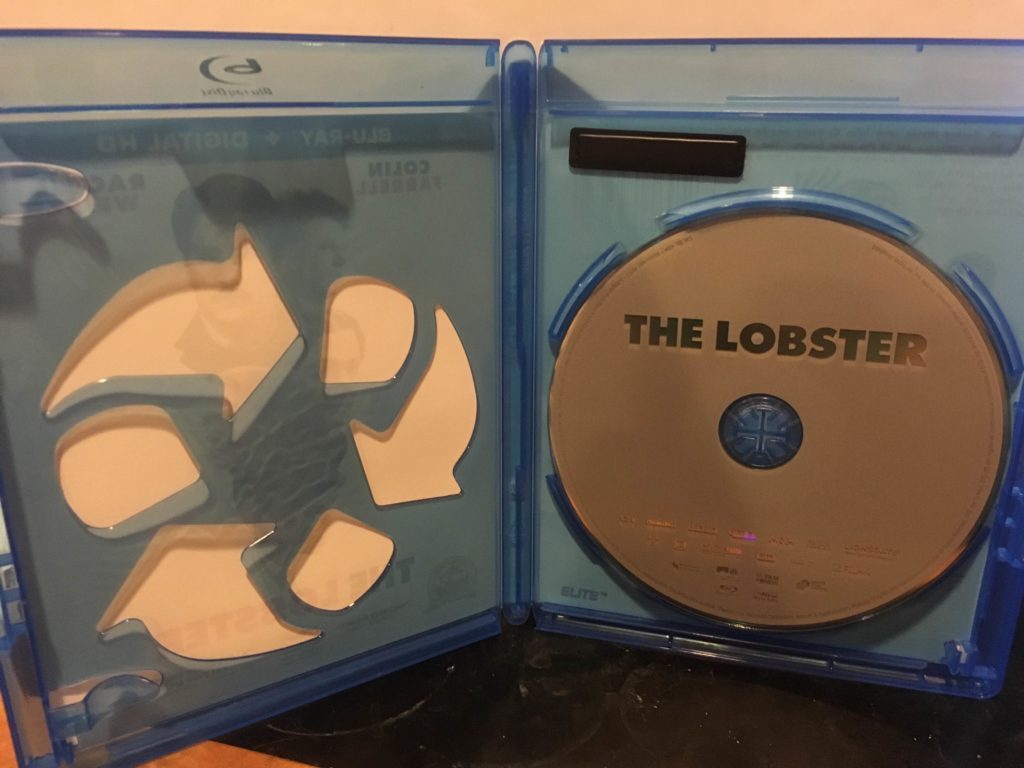 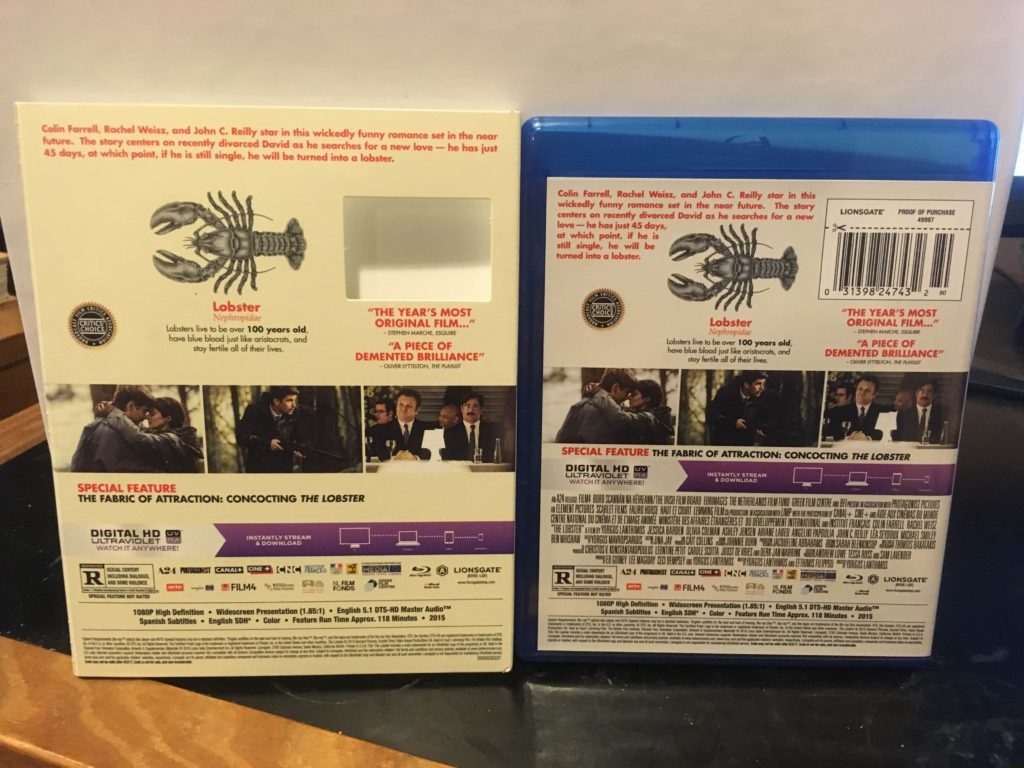 With only one special feature, however informative that it is in explaining the ideas behind the movie, and some rather bland packaging, I find it hard to give much praise in this department. 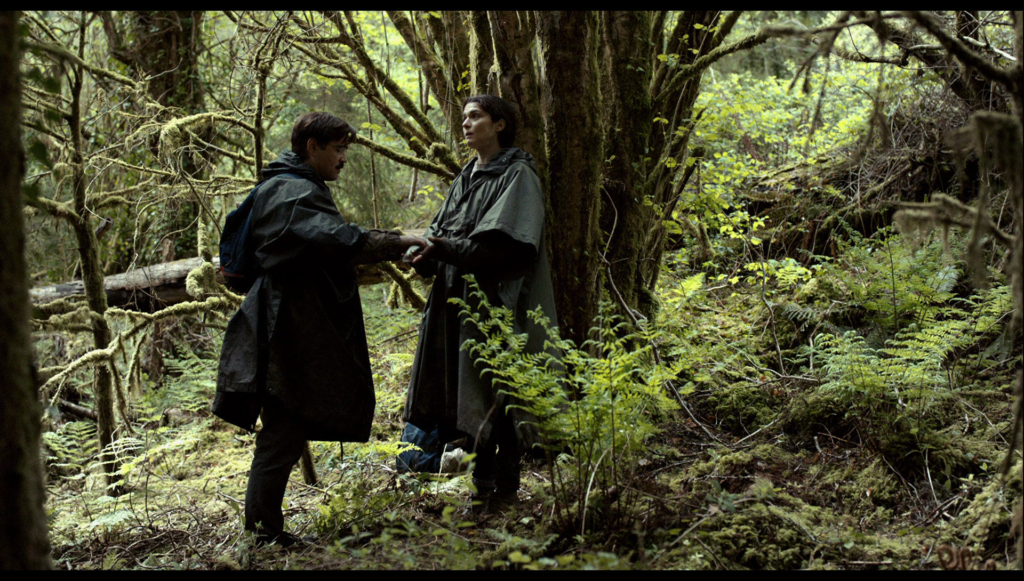 The Lobster is a fascinating film, managing to combine a sense of humor with an overwhelming sense of dread and ambiguity. The script is sharp and full of satire, and the cast brings their A game to the table, especially Colin Farrell and Rachel Weisz. Presented on home video by Lionsgate, the Blu-ray features an average video transfer, marred by an overly dark shooting style and an artificial layer of grain that just gets in the way of things. On the audio end, there isn’t much to write home about, and with little in terms of exciting special features or interesting packaging, it is tough to recommend you race out to grab this release of The Lobster. The movie is excellent, but the Blu-ray is barebones, and at a 17.99 price tag, is not much of a bargain.