What happens when the head of Motown wants to make a martial arts film with a 19 year old who had never acted and jam it full of music and the most cartoony characters this side of Scooby Doo?  You get Berry Gordy’s The Last Dragon.  Now, does it all work together and make for a good time?  Sho’Nuff!  (You’ll get it after you watch the movie)

The Last Dragon is at the very least a peculiar and interesting film, as full as Motown as it is devoid of big-name actors. Let’s be clear, that is not a bad thing. I first saw the movie as a 9 year old at school in a pre-class recess session. I arrived halfway through the movie and had no clue what was going on, not that seeing the whole thing would have remedied that at the age. That didn’t stop the movie from sticking with me through the years and when it came out on DVD I rented it and soon after purchased it.

Why did it hold such a grip on me? Probably because much like Big Trouble in Little China, it is a little quirky and a lot of fun. The movie is full of martial artists and musicians over actors. The plot is goofy and the villains are greatly entertaining. The director said they wanted to make so much of it just short of cartoonish. The best thing is that they failed with one of their antagonists, Sho’Nuff, and that is why it works so well. Sho’Nuff wouldn’t work if it Julius Carry didn’t play him full cartoon as he spits out phrases like “kiss my converse” and calls himself the “Shogun of Harlem”. Just for good measure, the movie isn’t completely devoid of quality actors. The aforementioned Julius Carry is a perfectly fine actor in his own right and we even see an early William H. Macy. 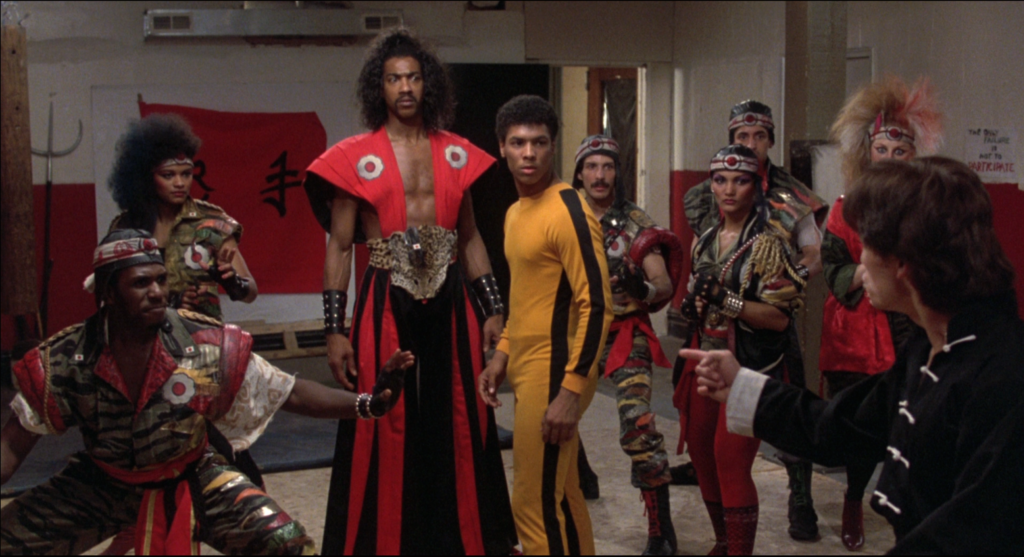 We start the film off with an accomplished martial artist named Leroy Green, played by Taimak, who is on a quest to finish his training. He so idolizes by Bruce Lee that he is often called “Bruce Leroy” and he even wears a yellow jumpsuit reminiscent of the one Lee wore in Game of Death. Leroy is searching for his final stage where he will master “the glow” while Sho’Nuff stands in his way. Leroy doesn’t wish to fight him, but Sho’Nuff wishes to be known as “the baddest mofo low down around this town”. Obviously, the community’s love and respect for Leroy as a martial artist stands in his way of controlling the city and puts the two on a collision course. All this and an obligatory love story with the singer Vanity. 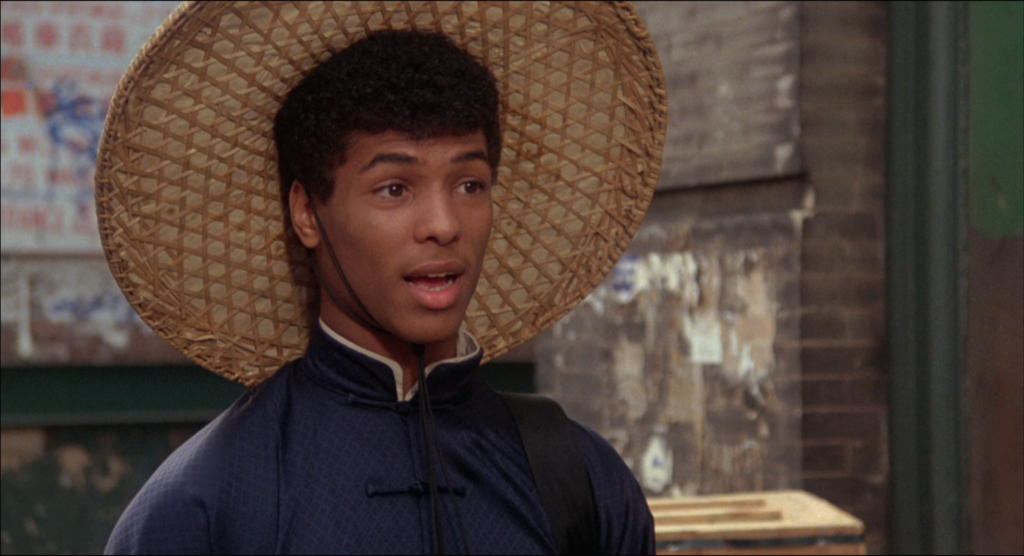 I think the strongest thing about this movie is that it really never takes itself too seriously and just wants to have fun. The main protagonist, while a great martial artist, is a bit of an awkward dweeb and inept with the ladies that his younger brother constantly mocks him. The soundtrack invades the movie in such a way that you often feel like you are now watching a music video. In fact, at one point a music video is featured in the movie. Sho’Nuff may be the  wackiest character in the movie, but his cronies and Leroy’s own entourage are no slouches. While this may keep it from being a straight action movie, the action is still satisfying. You are treated to an all out martial arts gang fight which is fantastic and goofy. Unlike some movies, this fight still doesn’t take away from the final showdown. 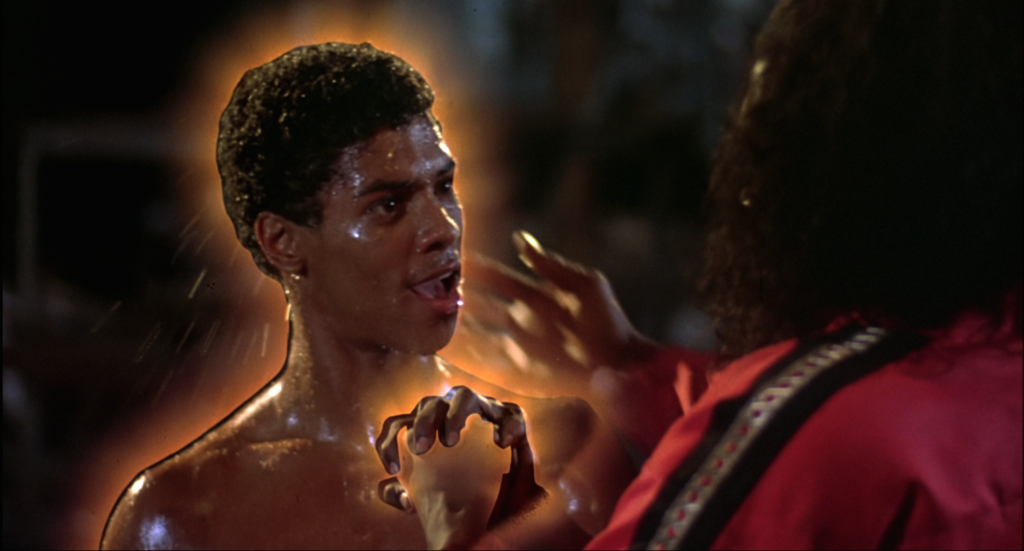 This is a movie that is from the mid-80s – and delightfully so. As such, you would expect some grain in the film. While there are differing opinions on this, I prefer my 80s movies to retain their natural grain. This blu-ray does not disappoint as it offers a well-detailed picture with what feels like a natural satisfying grain to it. For a movie as colorful as this is at times, I think the presentation is up to the task. For comparison, I pulled out my DVD copy of it and found a greater appreciation for the new video. The grain is about the same, so they haven’t destroyed the look with noise reduction. However, the image is much, much sharper and cleaner than the DVD. This is certainly the nicest this movie has looked on home video.

The disc comes equipped with a DTS HD 5.1 track. The audio stays clear throughout the movie and uses the surround effectively enough. I never struggled to understand anything in the dialog and the effects were pretty solid. They did a good job of mixing the music so you can enjoy all of that wonderful Motown goodness as well.

The blu-ray packaging includes a brand new cover art for the cover and slipcase created by the original art director of Rue Morgue, Gary Pullin.  This new artwork is a nicely stylized departure from the previous DVD releases and includes all the major players form the movie.  The disc art itself is nearly the same dragon art as the DVD release with some minor color changes. 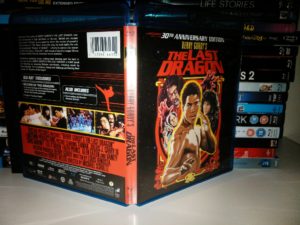 A little light on the extras for this release, but no lighter than the DVD before it. You lose the filmographies of the director, Taimak, and Vanity. But its an overall win because you gain a pretty good featurette.

Audio Commentary (Director Michael Shultz) – Overall, this was a fine commentary, but I honestly felt it would have been great to get more people in it. I would have loved for Julius Carry to join in. As it is, it is very matter of fact telling of the production of the movie. Offers some interesting insight into the racial make up of the union at the time and pros and cons of casting martial artists over actors. It is worth listening to at least once. 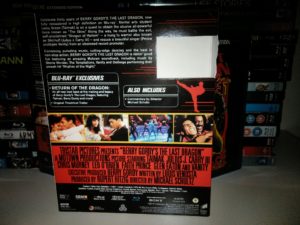 Return of the Dragon – Featurette including several cast and production members discussing some of the trials of the film and its impact.

I’ll admit that I have a sentimental preference for this movie.   I’ve already mentioned how I rented and then bought it on DVD because of how I remembered half of the movie from when I was in elementary school. But, in its defense, there are a lot of movies I watched years later in similar circumstances and didn’t enjoy it. This movie has the pure silliness and fun to hold up to repeated viewings. This presentation is perhaps a little light on extras, but what it does have is satisfying. Given that it is often found for under $10, I’d say it is worth the gamble to pick it up if you at all enjoy energetic, silly movies. I think you’ll find yourself re-watching it over time for a fun evening. Just don’t pick it up expecting a Bruce Lee martial arts movie and you shouldn’t be disappointed.