The Hunt is a 2020 American horror thriller film that was directed by Craig Zobel and written by Nick Case and Damon Lindelof. The film stars Betty Gilpin, Ike Barinholtz, Emma Roberts, Ethan Suplee, and Hilary Swank. Jason Blum was a producer on this film under his Blumhouse Productions banner, along with Lindelof. Both Zobel and Lindelof have said that the film is intended as satire on the profound political divide between the American left and right.

The film was first announced in March 2018, and the cast signed on a year later. Filming took place in New Orleans. The film was originally scheduled for release on September 27, 2019. However, as a result of the Dayton and El Paso mass shootings in early August 2019, Universal Pictures decided to delay it. The studio announced the delay in the days after receiving criticism from Donald Trump and right-wing media for its perceived bias.

The Hunt was theatrically released in the United States on March 13, 2020 by Universal Pictures and received mixed feedback from critics. The onset of the COVID-19 pandemic resulted in the closure of most theaters within a week of the film’s release, which resulted in the film underperforming at the box office and grossing only $15 million. Universal Studios made The Hunt available digitally on March 20.

The Hunt is a movie that, while it didn’t advertise itself as one, really did an amazing job at being a bloody action thriller as it accompanied the insanity of our entire political ecosystem as it stands today. While it’s nowhere nearly as clear cut as our Left v Right or Red v Blue spectrum of politics, it’s a clear enough cut in its presentation that you just know. The story as a whole is enough to capture you in and keep you engaged from beginning to end considering the events that are going on within society, and overall I found it to be one hell of a ride from beginning to end.

Encoded onto a BD-50 disc, the Blu-ray release of The Hunt is brought to us courtesy of Universal Studios with a 2.40:1 visual presentation. The overall finer details of the film, including the more rural sequences in which the actual hunting takes place really looked damn good on my living room TV. This movie was reported as being shot on the Sony CineAlta Venice and with its final digital intermediate, I would have personally loved to have seen this movie come out onto 4K UHD too. The camera movements were perfect in that they really do a great job at making you feel as if you really are a spectator of this insane sport; and overall I had a really good time watching this and engaging with the story.

Bundled with an English DTS-HD Master Audio 7.1 mix, the Blu-ray release of The Hunt packs an insanely immersive audio experience that is considerably deep, rich and does a fantastic job at putting you right into the middle of the action. The transitions from channel to channel, especially during the more quickly paced parts of the movie, were effortless and you could close your eyes and put yourself into the center of the action. Dialogue is spoken clearly, and the characters were able to be heard and understood without any need to adjust the volume levels. If you have a complete home theater setup in your movie room, this release is definitely a good one to showcase the capabilities of those speakers!

The Blu-ray release of The Hunt comes packaged in the standard 2-disc Blu-ray amaray case. In that case are the standard DVD and Blu-ray copies of the movie, neither disc really featuring any artwork outside of the standard release text. There is a digital copy redemption pamphlet that will allow you to add the digital copy of the movie to your preferred digital media locker. There was also a slipcover that was available in the initial pressing of the release featuring the same artwork as the case. Unfortunately, my copy did not come from the first pressing of the release; so I did not get a slipcover with it. 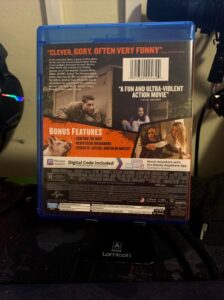 The supplemental content that comes packaged with The Hunt leaves a lot to really be asked for.  While the material that was included was a nice exploration, they were way too short and offered very little of anything that’s of any kind of benefit to the release.  Included with this release is:

Overall, I really enjoyed watching The Hunt.  Regardless of political stance, we can all agree that society in America is royally fucked up right now, and this movie does a phenomenal job at capturing and presenting the two completely opposite ends of the political spectrum we live in and it throws in a good bit of violence to make it somewhat entertaining.  The video and audio presentation of the Blu-ray were really nicely done, and I can only dream of what this movie would have looked like with a 2160p presentation with HDR.  Special features weren’t really worth my time in exploring.  If you’re looking to grab this movie for your collection, I’d recommend picking it up while it’s on sale somewhere like myself.  The Hunt is available on Blu-ray and DVD today.