Unless you attend film festivals all over the world, chances are you have not heard of The Demolisher, which was picked up by Dark Sky Films after a festival run in 2015. The front cover of the Blu-ray release features a quote from Bloody-Disgusting, promising “A powerful, jolting entry in the vigilante genre”. With other review snippets comparing The Demolisher to a film by John Carpenter, Michael Mann, or even the visually stunning style of Nicolas Winding Refn, this should have been an amazing indie film experience. Unfortunately, these reviews could not have been further from the truth. At a certain point, the film community will realize that positive reviews for a film like this are almost certainly a marketing ploy, and nothing more than that. The team at Bloody-Disgusting, Ain’t It Cool News, or The Hollywood Reporter, to name a few, know that if they give these films a positive review, they will have their publication’s name front and center on posters, Blu-ray covers, and promotional materials. Otherwise, there is absolutely no explanation for a positive review of The Demolisher, as it is one of the most disjointed, completely confusing, and boring films that has ever been released.

The Demolisher follows Bruce, a cable repair man, and his quest to get revenge on the cult or biker gang who attacked his wife, Samantha, a police officer in Toronto who was left disabled and unable to walk after the attack. The cult/biker gang dilemma is a total mystery, as the film never explains what exactly they are supposed to be. In an early scene, where the flashback to Samantha’s attack is shown, there is an attempt by the group to sacrifice a newborn baby. This speaks to the cult side of the argument, but in all future scenes, Bruce hunts down members of the group by identifying them through their branded leather jackets, which speaks to the group being a biker gang. Personally, I am going with a cult that has an affinity for leather jackets and motorcycles, because newborn sacrifices seem outside the realm of a simple biker gang; maybe I’m naive.

The confusion on the cult/biker gang is just the tip of the iceberg, as we are introduced to characters with no background, the vigilante attacks are unexplained, dialogue is almost non-existent, and the film is edited clumsily, with fast cuts between action and calm, meaning to serve as a contrast in tone, but instead serving as an extreme annoyance. Bruce randomly kills anyone he runs into, and then becomes an extreme stalker in the third act, for seemingly no reason and in a completely absurd way. Revenge is a very cool topic, and, as John Wick has proven, when it is done well, it can create a masterpiece. However, The Demolisher gives the viewer no context or motivation for the majority of Bruce’s actions, the revenge killings are sloppy and spliced with quick cuts to other scenes which lessens their impact or importance, and the construction of the film stands on a shaky foundation from the start. If there is a positive, Bruce looks cool in his police riot gear, which he wears when he goes on his revenge rampages, but that is it.

In all honesty, I shut this movie off after 45 minutes due to complete frustration. I eventually came back to it to write this review, but one can only take so many long stares, terrible dialogue, poorly designed plot points, and complete and utter confusion. I kept waiting and waiting for things to connect together and start to make sense, but it just never materialized to anything more than an overly stylized crapfest. I cannot recommend that anyone, even the most art-house loving film fan, should watch this movie. If you can make it through the entire film in one sitting, you are a stronger person that I am, but I will never spend my time trying to understand this movie again.

The Demolisher was shot on an Arri Alexa camera, and has a soft, digital feel to the visual presentation. There are a few scenes that really caught my eye, like an opening sequence of Bruce in full riot gear under blue neon lights at night, or the scenes with Bruce in his car at night in the third act. The visuals are much nicer than the film itself, and even though this is a low-budget release, things are put together nicely. Dark scenes often feature some sort of colored light, whether it be the aforementioned neon lights of the city, a soft, red lighting in a cult hideout, or street lights reflected off a car, and this allows the viewer to easily distinguish every action, even if they are left unexplained. The Demolisher looks better than most indie films, but it still lacks behind a major studio production. The best thing about this release is the way it looks on your TV, but unless you just want to let it run in the background of parties as some sort of visual art piece, the visuals aren’t a big enough draw to warrant a purchase. 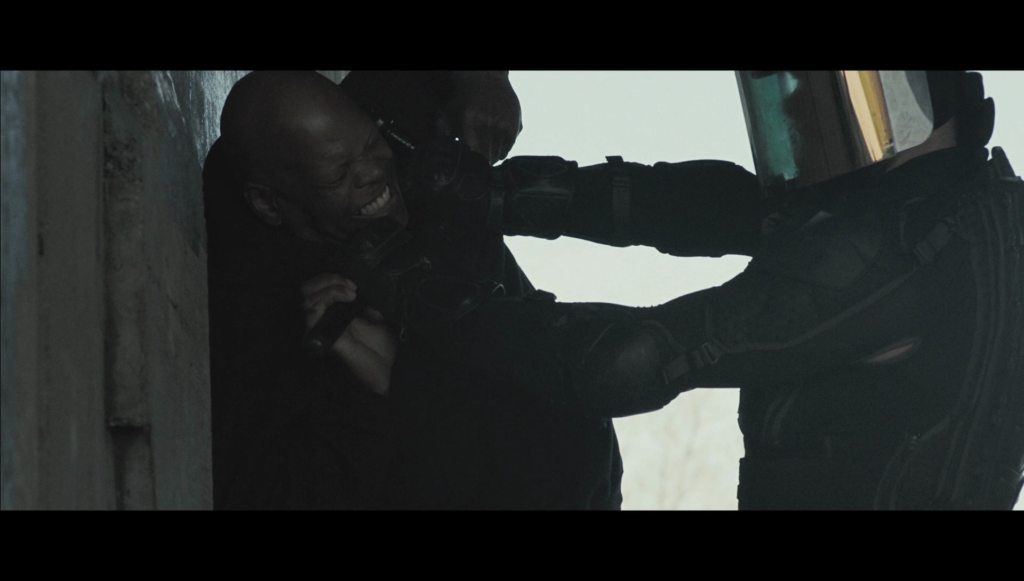 The Demolisher features a standard DTS-HD Master Audio 5.1 track, which, while not as impressive as the visual merits, is solid and well-balanced. There is not much of a soundtrack to this film, which is sorely lacking. Vigilante films are always best served with an equally aggressive soundtrack. I fear that style may have taken preference here, as slow, electronic music dominates the score, but never really leaves the viewer excited for what’s next. My SVS Prime home theater performed well, and the ambient sounds worked well in the confusingly empty streets of Toronto. Maybe The Demolisher takes place in a post-2016 Election world, where every bordering country of the United States has fled for cover, but the empty city streets did make for some cool audio effects and echoes. 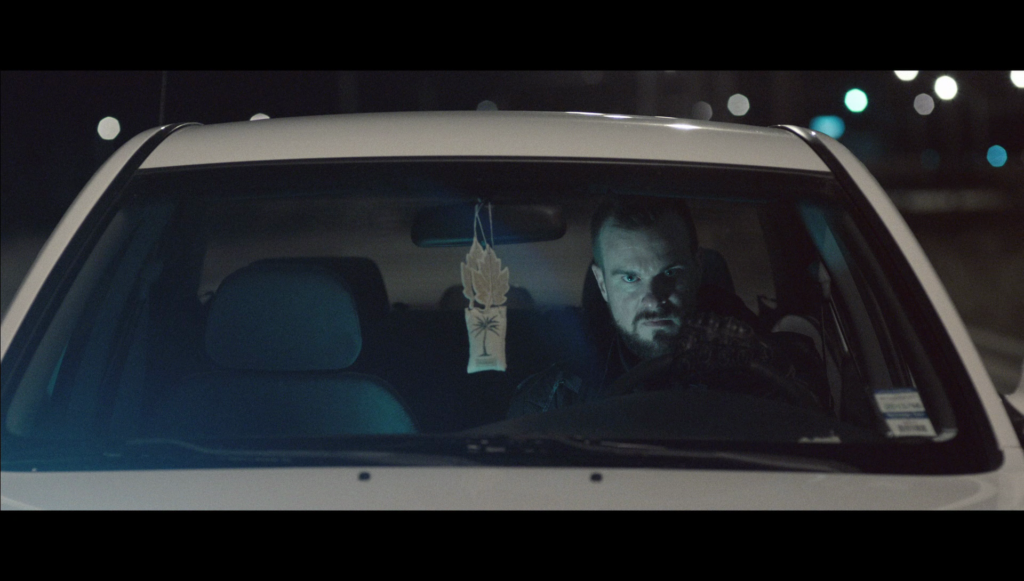 Dark Sky Films has released The Demolisher in a one-disc Amaray case, featuring just the Blu-ray disc and no digital copy or DVD. The artwork is nice, with a creepy, throwback vibe featuring turquoise lettering, almost looking like an old 80s VHS tape in its style. 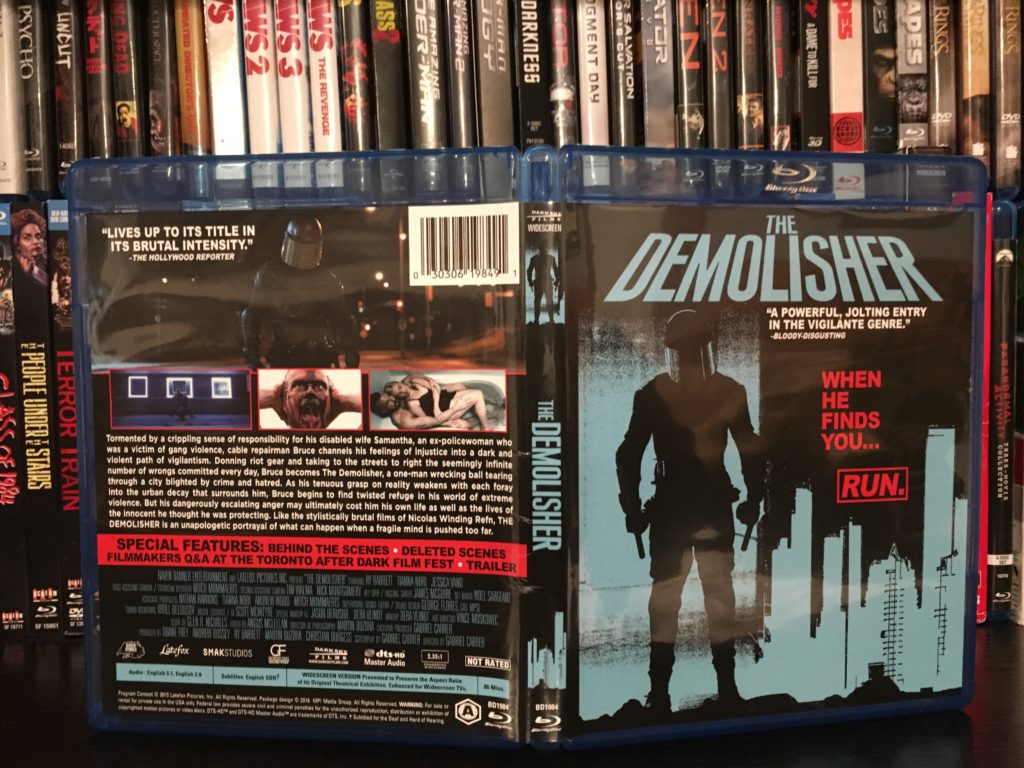 The special features for this release total just over 30 minutes, although I am not sure anyone will bother with them after watching the movie. There are some deleted scenes, which add no context to an already confusing storyline, and a behind the scenes featurette which does not explain just how The Demolisher became the disaster that it is. There is also a 23 minute filmmaker Q & A from the Toronto After Dark Film Festival, which is actually pretty interesting. 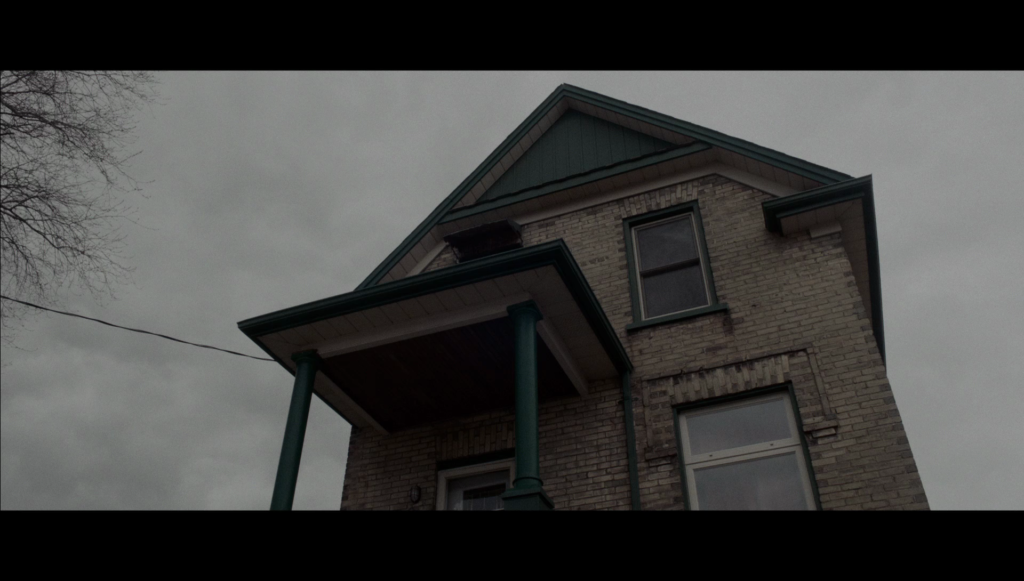 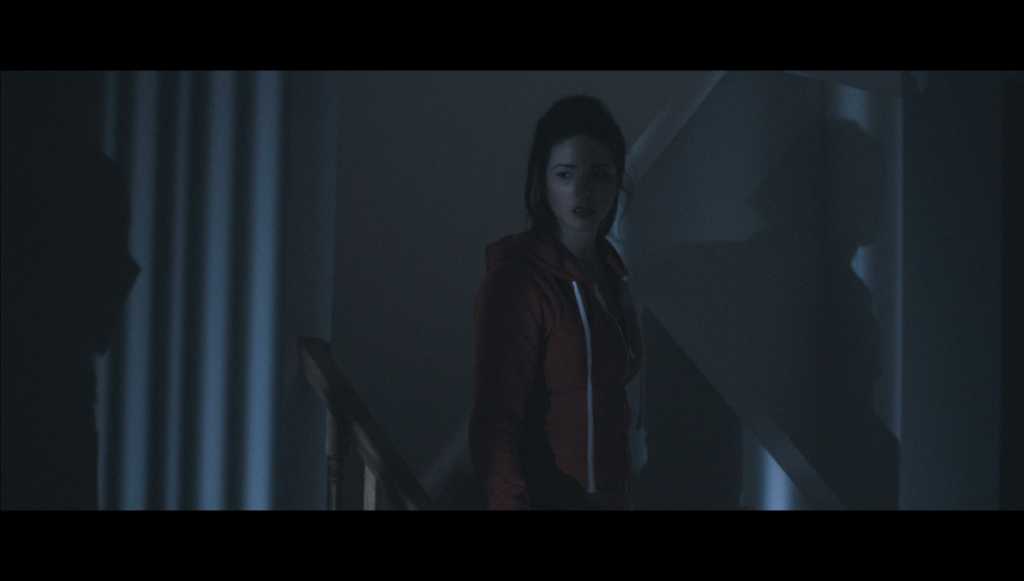 While the audio and visual merits are solid, and special features are of a decent amount for a film of this caliber, there is absolutely no reason to run out and purchase The Demolisher on Blu-ray. The storyline is so convoluted and confusing that you would need pages of background on the characters and their motives to even begin to understand what is happening. I appreciate the attempt at making a sort of Nicolas Winding Refn stylized film, that inserts visual cues rather than excessive dialogue, but that style is extremely hard to replicate, and The Demolisher misses the mark. Even Refn himself has struck out on his own trademark style for his past two films, and so for an amateur filmmaker to attempt this is a bold act, and unfortunately it does not pan out. If you must, you can find The Demolisher on Amazon, but my suggestion is to skip this one, and maybe give it a try on Netflix or another streaming platform later on if your curiosity gets the best of you. Just don’t say I didn’t warn you.