Nolan’s inspiration for the film was the Joker’s comic book debut in 1940, the 1988 graphic novel The Killing Joke, and the 1996 series The Long Halloween, which retold Harvey Dent’s origin. The “Dark Knight” nickname was first applied to Batman in Batman #1 in 1940, in a story that was written by Bill Finger. The Dark Knight was filmed primarily in Chicago, as well as in several other locations in the United States, the United Kingdom, and Hong Kong. The film was the first mainstream feature to partially utilize IMAX 70mm cameras, with Nolan using them for 28 minutes of the film, including the Joker’s first appearance. Warner Bros. initially created a viral marketing campaign for The Dark Knight, developing promotional websites and trailers highlighting screenshots of Ledger as the Joker. Ledger died on January 22, 2008, some months after he completed filming and six months before the film’s release from a toxic combination of prescription drugs, leading to intense attention from the press and movie-going public.

Upon its release on July 18, 2008, The Dark Knight achieved significant critical and commercial success. With over $1 billion in revenue worldwide, it became the highest-grossing film of 2008 and the fourth-highest-grossing film at the time of its release; it also set the record for highest-grossing domestic opening with $158 million, a record that it held for three years. At the 81st Academy Awards, the film received eight nominations; it won the award for Best Sound Editing and Ledger was posthumously awarded Best Supporting Actor. The Dark Knight is considered to be one of the best films of its decade and one of the best superhero films ever made. The Dark Knight Rises, the final film of the trilogy, was released on July 20, 2012.

The Dark Knight is the Batman movie that REALLY took my interest into superhero movies and the tales of Gotham City to a completely new level. A combination of the performances from both Bale and Ledger, this movie is and will always remain one of my top ten favorites. Everything from the storytelling to the character development from beginning to end, this movie is just that good.

The 4K UHD release of The Dark Knight takes the overall Batman saga and breathes a significant amount of new life into the saga, as well as the previously released Blu-ray counterparts. The parts of the picture presentation that certainly stood out more than others, would be those that were originally shot using IMAX cameras. Those particular scenes were, without a doubt, the best parts that made this release; and as a result, I would definitely agree that this particular release should be used to show off your 4K setup at home.

Going into the 4K UHD release of The Dark Knight, I would expected a significant amount of immersive-ness to the movie and the experience. I mean, this is the time and format for them to shine, and I couldn’t help but feel a little underwhelmed by the chosen DTS MA 5.1 track. The track as a whole wasn’t bad; but I feel that this release could have really shined had they opted to remaster the audio into Dolby Atmos. Other than that one minor grievance, everything presented in the 4K UHD release is clean, clear and easily understandable without the need to manually adjust your volume levels.

The 4K UHD release of The Dark Knight comes packaged in the standard two-disc amaray case.  In that case is the standard 4K UHD copy of the movie, the standard Blu-ray copy as well as a digital copy redemption pamphlet.  There is a slipcover that was made available during the first pressing of the release that features the same artwork that’s made available on the case.  I, however, do not have the slipcover as I purchased The Dark Knight trilogy and the cases are stored in a larger box that keeps them together. 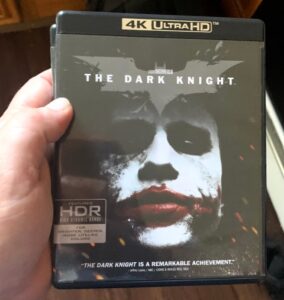 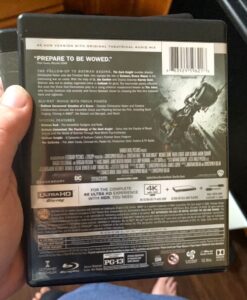 I’ve read some significantly negative reviews about the fact that the The Dark Knight 4K release doesn’t really include much in terms of additional content when looking back at the previously released 2008 Blu-ray copy. Regardless of that feedback, I do feel that the content that is included with this release was spectacular as it was a new look at the material that I had previously neglected to check out. Included with this release is:

Overall, it was really great to sit down and re-visit something that’s been many years since I’d last seen it. The story is still one of my personal favorites, and the upgrades that were done to make the 4K release were really nicely executed and offered an extremely clean and clear presentation in terms of both video and audio. Regardless of the people out there complaining about the special features, I can understand your frustrations with it; but beggars can’t really be choosers. If you’re looking to add this to your collection, I would definitely recommend picking it up. The Dark Knight is available as a standalone 4K UHD release, as well as being included with the The Dark Knight 4K UHD Trilogy Collection.

Additionally, if you would like to check out my colleague’s review of the previously released Blu-ray copy, you can do so HERE.