Cars, guns, explosions, damsels in distress, evil kidnappers, zany police. These are things that feel more at home in say, a James Bond film than in a Japanese anime film, let alone one directed by legendary Japanese director Hiyao Miyazaki.

But, like most famous directors, Miyazaki didn’t get started with innovative, thought provoking action-adventure films, but got his start directing more traditional types of movies, such as The Castle of Cagliostro, a Lupin the 3rd feature film that was released in Japan in late 1979. 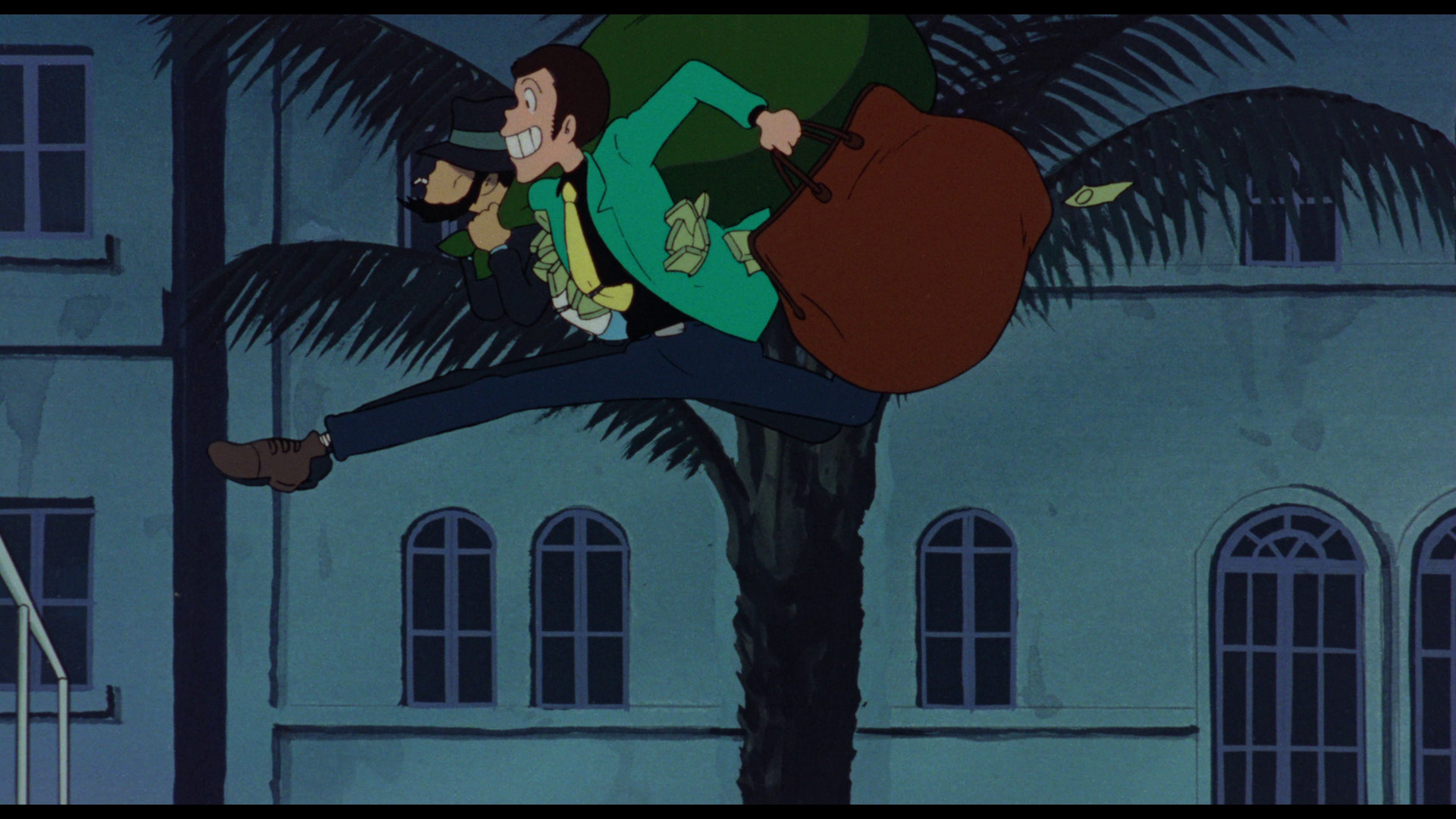 Lupin the 3rd is, for those who don’t already know, one of the most beloved of all anime franchises, getting its start in the1960s, with a following television adaptation in the early 70s that would reappear in short spurts, infrequently running as recently as last year in Japan and Italy. The series follows the exploits of Arsene Lupin the 3rd, the greatest thief in the world, and his adventures with his partner Jigen. They travel the world stealing desirable items, and avoiding getting caught by Lupin’s nemesis, Interpol officer Zenigata. The easiest way to describe Lupin the 3rd, to the best of my knowledge, having only seen a handful of episodes of the anime television series, and this feature film, is the love child of James Bond and Alfred Hitchcock movies. 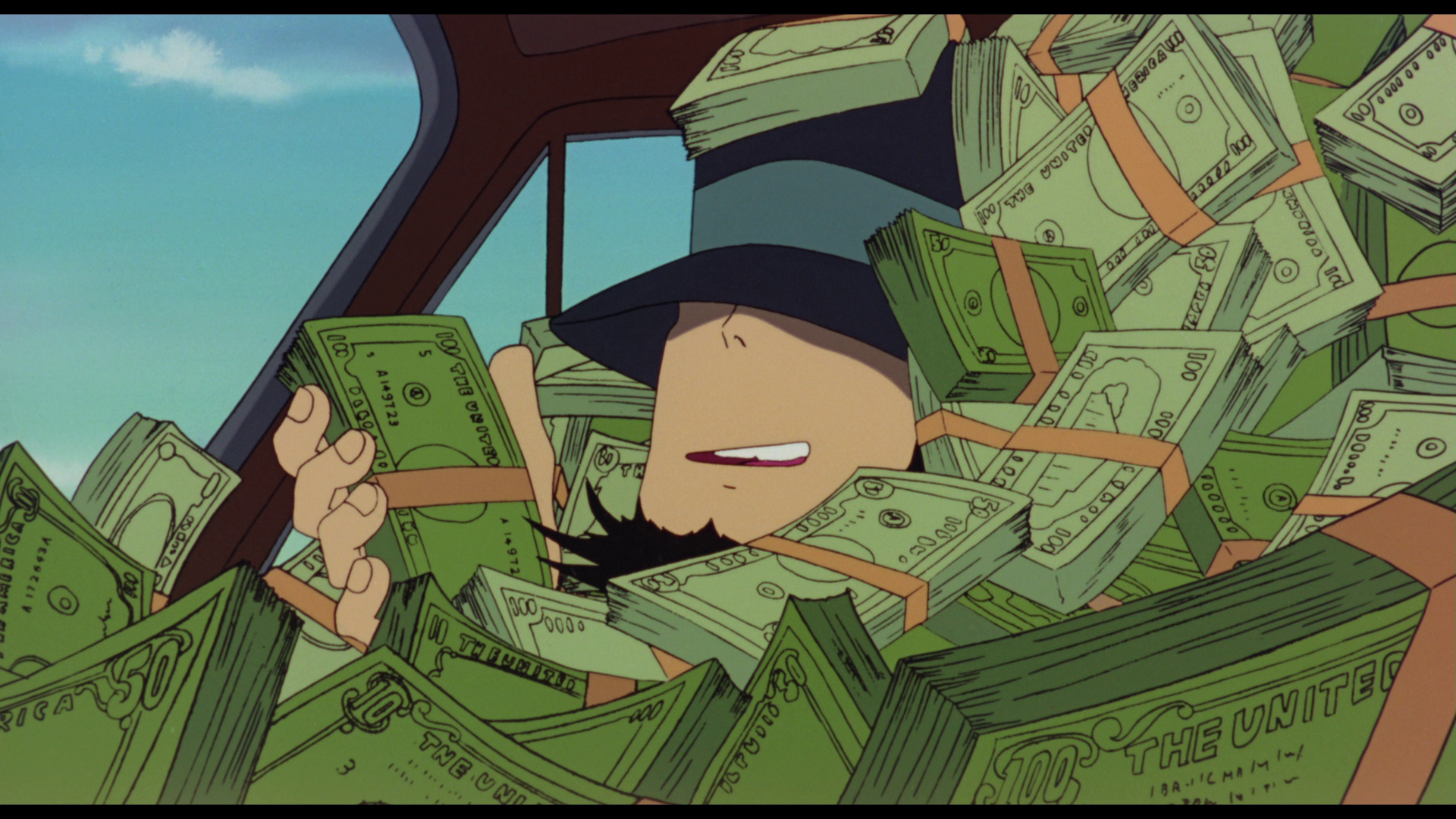 This movie follows Lupin and Jigen as they attempt to track down the source of a legendary stash of counterfeit bills. Their quest leads them to the tiny sovereign nation of Cagliostro, where they get tangled up in a plot that concerns a family conflict, a long lost treasure, and an international crime ring. To say anymore would be to risk ruining the fun packed into the film’s brisk 100 minute run time. 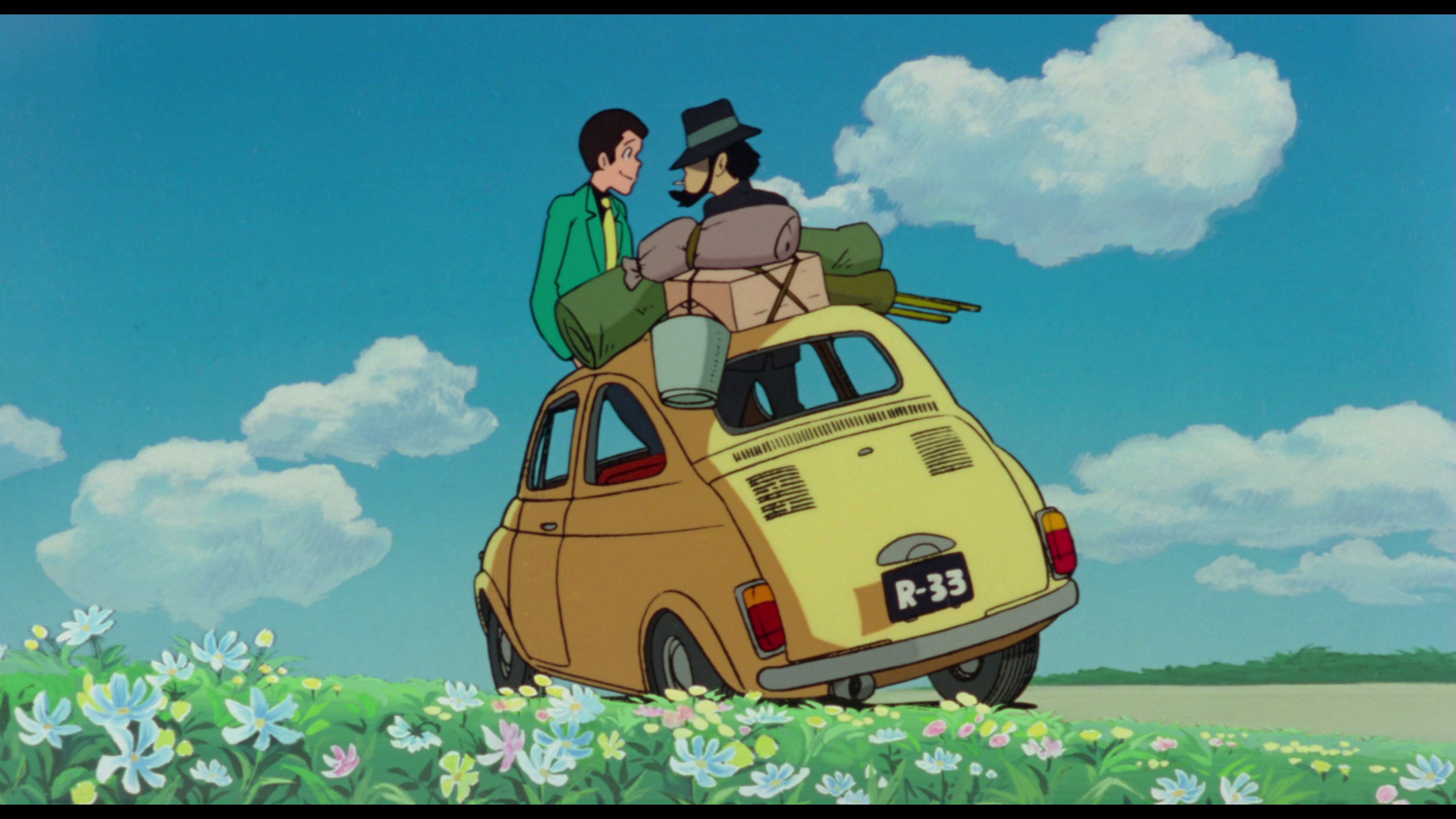 The film carries many of the qualities that carry into future films from our famed director. The colors are bright and varied, and the animation is generally of very high quality, with some especially painterly landscape shots sprinkled throughout. The film contains various bouts of over the top violence, something that Miyazaki would mold and refine into an art of sorts in his later films. The film is a lighthearted crime caper of sorts, and features a moderately watered down take on the characters of the Lupin the 3rd world, to help it appeal to a wider audience. The film is packed with humorous moments, and never slows down enough to let any one sequence drag. The score, while not as memorable as a Joe Hisaishi score, is fun and bouncy, with a heavy jazz influence. The film features several characters from the television series, but heavy background knowledge is not required to understand their place in the universe. 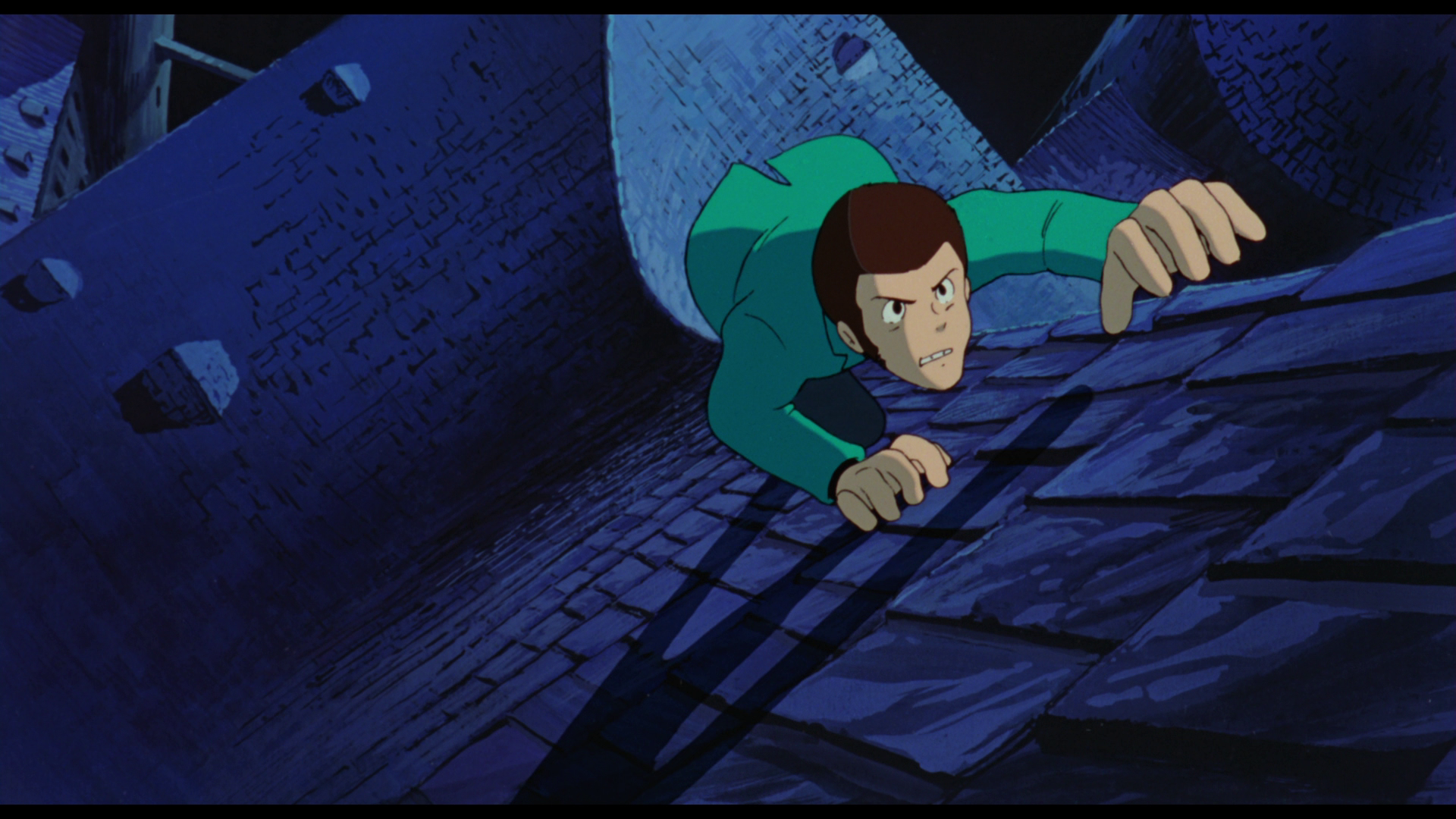 The Castle of Cagliostro is fast, fun, and makes for a very satisfying experience. It will never stand up to his later original masterpieces such as Nausicaa of the Valley of the Wind, or Princess Mononoke, but what we’ve got here is still very impressive, especially for the work of a first time feature director.

Animated by hand, and then shot on 35mm film for theatrical distribution, The Castle of Cagliostro is presented in the slightly letterboxed aspect ratio of 1.85:1 in 1080p by Discotek on Blu Ray to match the theatrical presentation.

As I mentioned above, the video transfer features great color, that pops right off the screen. The film switches color palettes subtly to represent the different characters of the film, and the video transfer keeps up quite nicely with the shifts. Detail abounds in background animation and character animation for the most part, only hiccuping in a few soft moments that date back to limitations inherent to the source material. 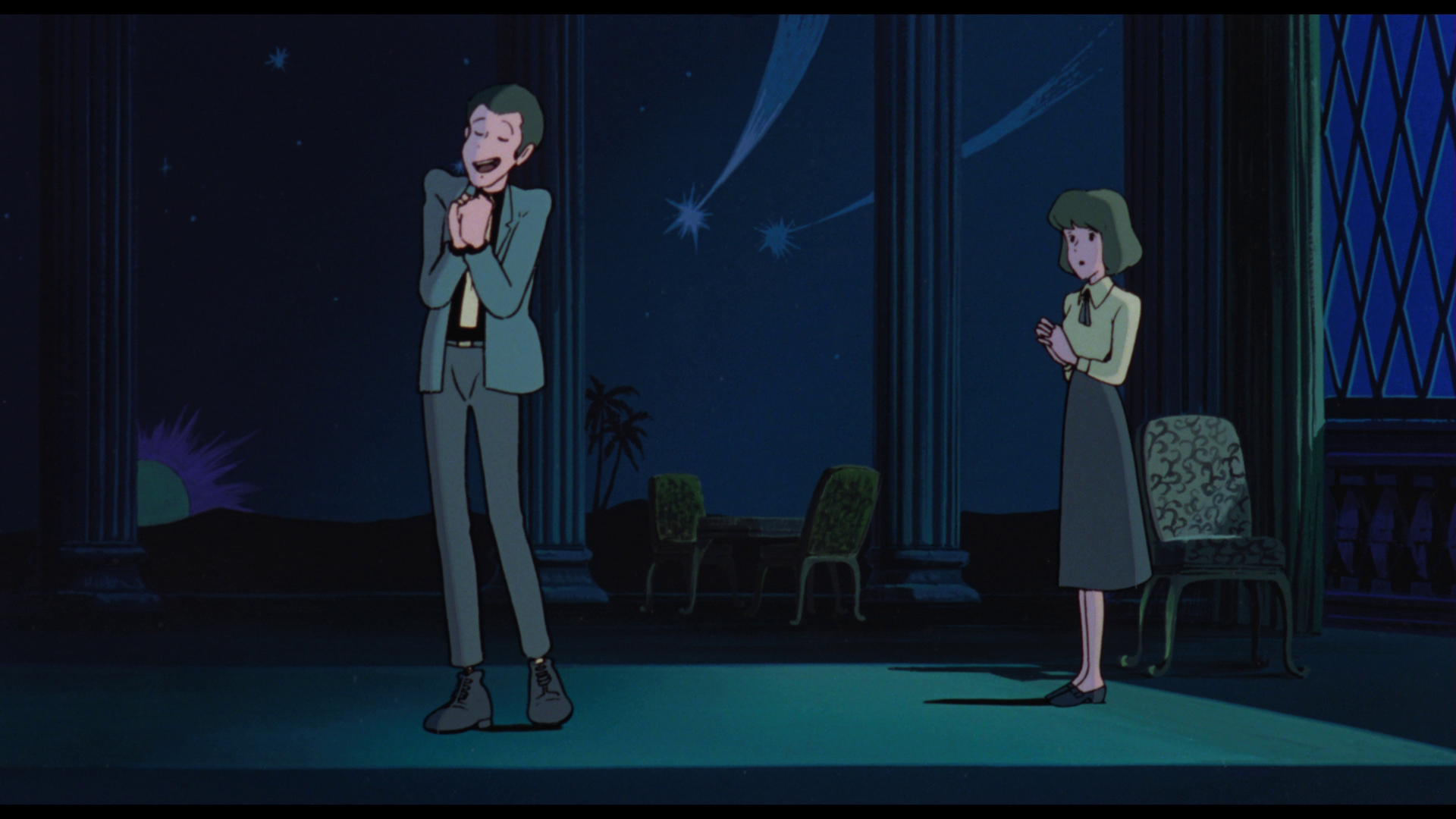 This Blu Ray however, falls prey to the hands of grain reduction fairly heavily. Throughout the film’s 100 minute run time, there is little to no film grain present. It doesn’t result in loss of detail, but it loses a little bit of that film like texture that movies of that time period have, like the Blu Ray release of Miyazaki’s 1983 film Nausicaa of the Valley of the Wind. 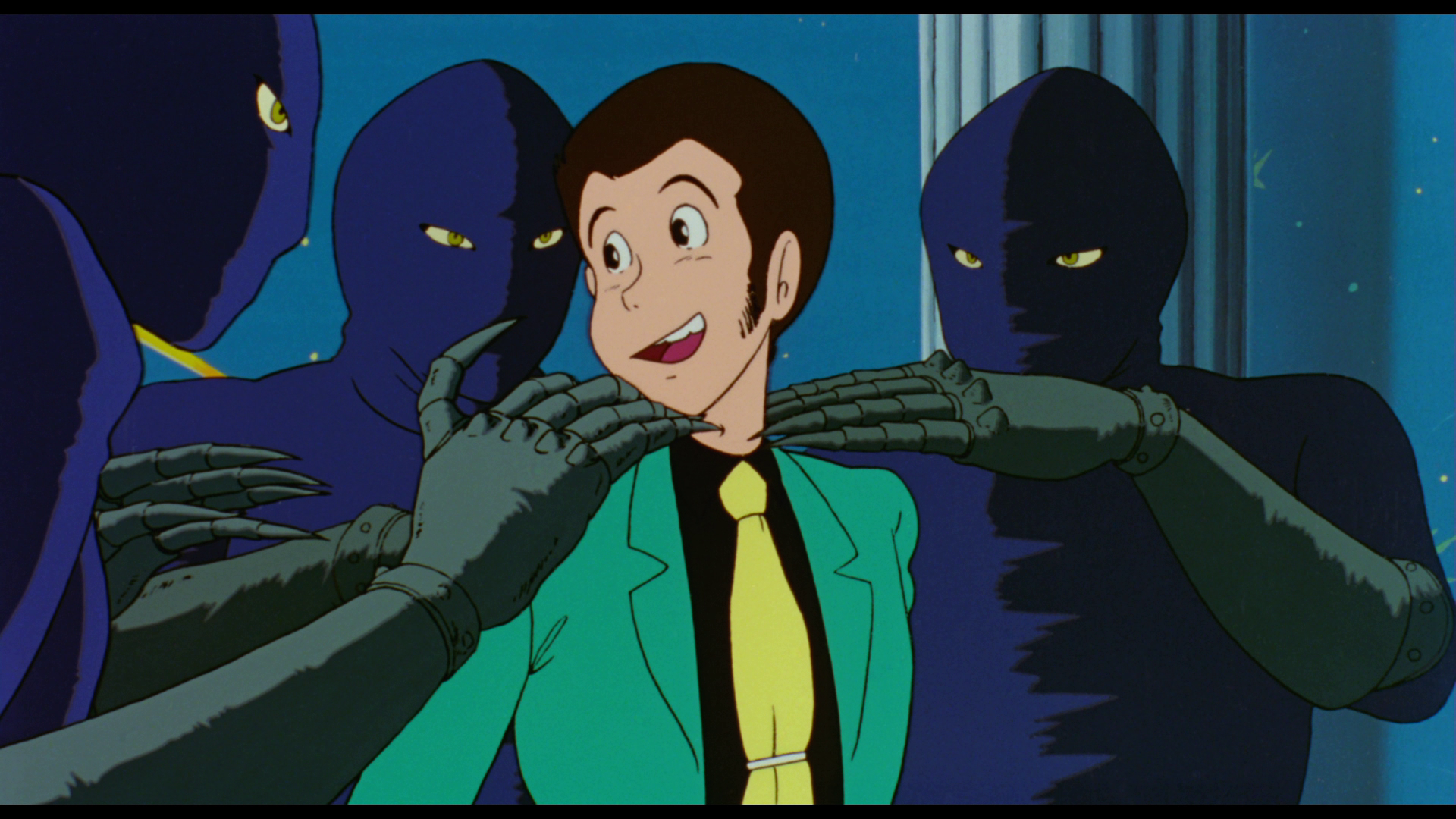 On top of that, print damage is present throughout the film, sometimes tainting large portions of the frame, such as in a shot that features the full Interpol police force early on in the film, and a few other times. Other than that, the presentation feature some light speckles all over the place, and some obnoxious gate weave. I also noticed some strange artifacts on screen during a wedding scene that occurs late in film. I was not exactly thrilled with the visual quality of this presentation. 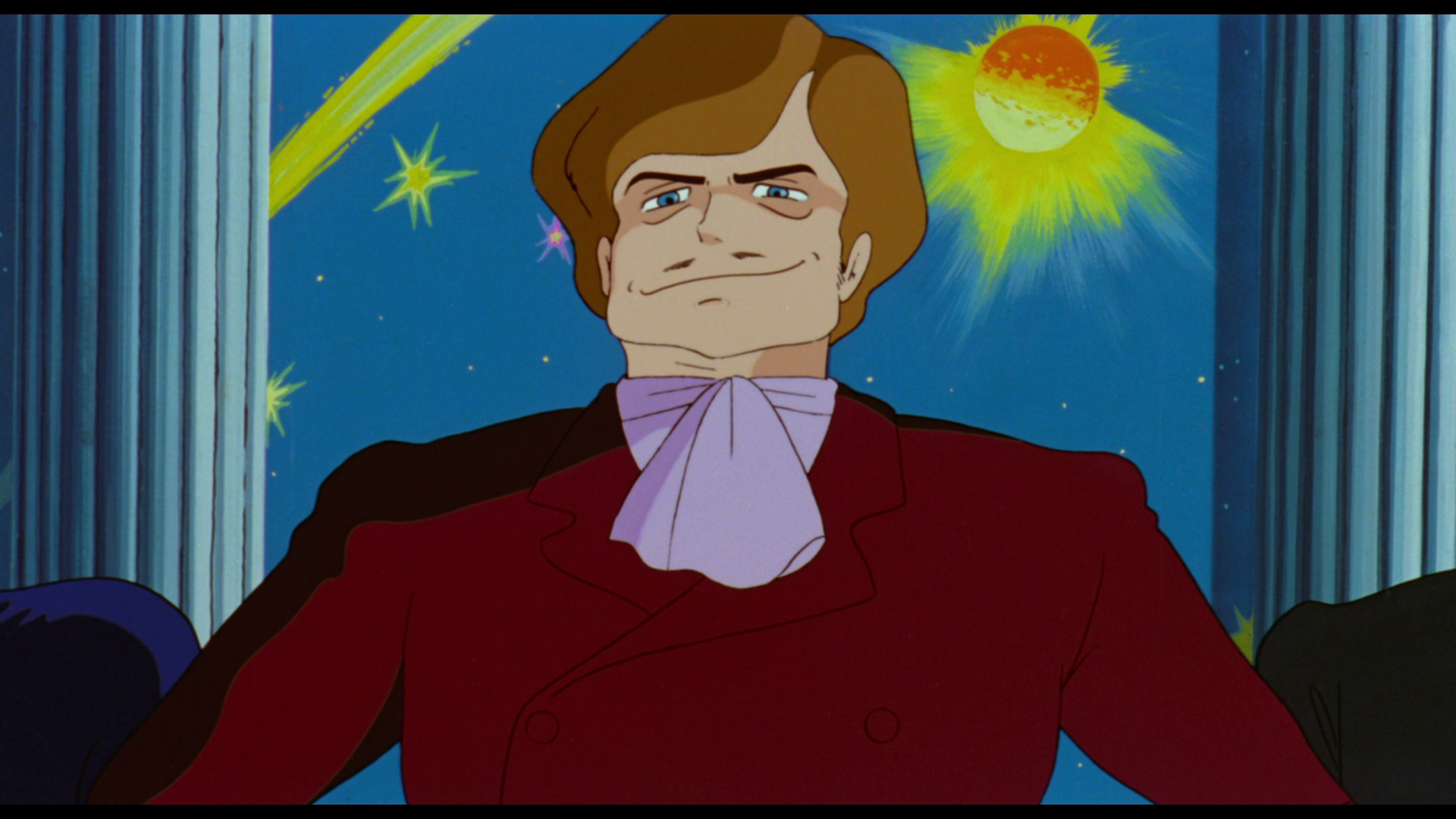 It should be noted that there are two sets of subtitles, a 1980 translation, and a 2014 translation. Both appear inside the film’s framing, and are generally non-intrusive.

The collector’s edition of The Castle of Cagliostro, in true collector’s form, includes five separate audio tracks for your listening pleasure. They are as follows:

I chose to view the film using the mono Japanese mix, and found that even though it was restricted to a single channel, the sound was full and pleasant to listen to. The mix was created for a low budget animated feature, and while there is very little low end to speak of, the sound effects, dialogue, and score never get lost in under another. I watched the first half hour of the film using the other five sound formats. I found that the Japanese 5.1 soundtrack is quite good for a remix, although as a rule I always prefer lossless audio when possible. The music and sound effects pan across the entire front spread quite nicely, and there is a little low end kick when the music warrants it, or say, an explosion happens on screen. Surrounds are used sparingly, and to good effect, much like in modern films. 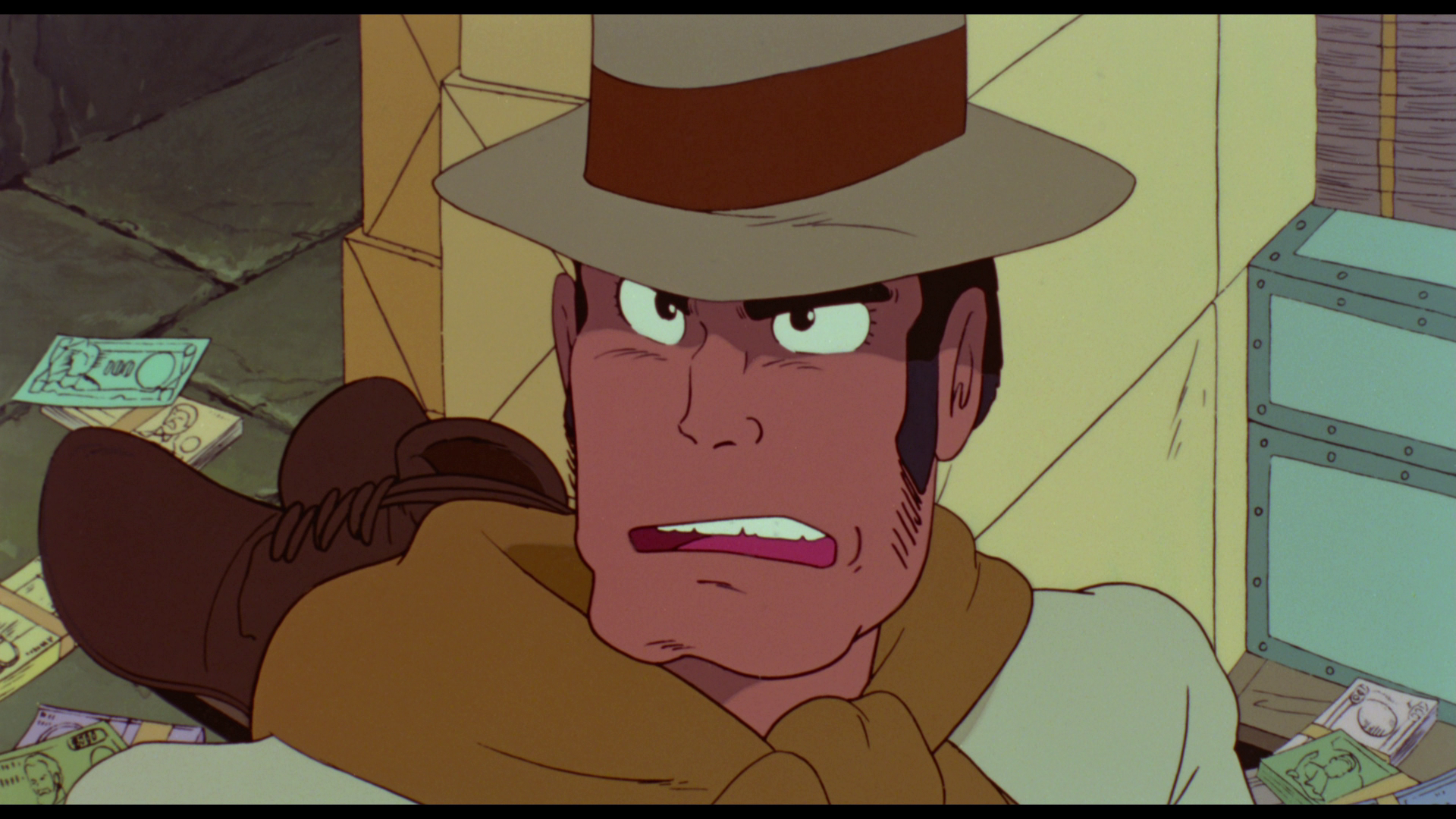 As for the English sound choices, the 1992 Streamline dub, while not exactly amazing by any standards, sounds about as good in terms of quality as the mono Japanese mix, with little fanfare to speak of. The 2000 Manga dub, whether you choose the slightly altered family friendly mix or not, in 2.0 stereo, sounds excellent. The dub itself is of slightly higher quality, featuring well known American voice actors such as David Hayter, known for creating the distinctive voice of Metal Gear Solid’s Solid Snake character. The stereo track features excellent panning across the two channels, and a healthy amount of low end kick, perhaps even more so than the 5.1 Japanese Mix. Overall, considering the variety of tracks, and the overall quality of each one, the audio portion of this Blu Ray is fantastic. 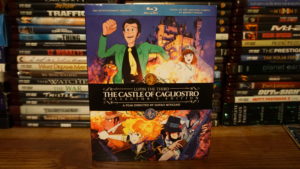 The Castle of Cagliostro, released by Discotek, features excellent packaging. The Blu Ray, which comes in a standard keepcase design with slipcover, is colorful, and full of detail. The slipcover art does an excellent job of highlighting all of the film’s major characters. The keepcase art itself mirrors something much closer to that of the theatrical poster from Japan. The release features reversible cover art, which reveals a third piece or art, which retains the vibrant colors and quality of the first two designs. 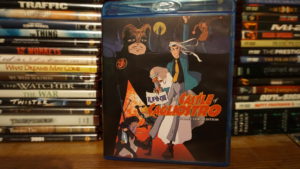 As for special features, this release comes with a huge assortment of extras. Included are a series of alternate versions of the opening, one without credits entirely, and a set that represents the early US release’s attempts to hide the Japanese text on screen during the intro credit music. The credit-less opening has a painterly, calm aesthetic to it, while the two US intros are rather amusing, as it shows the extreme lengths to which the distributors went to reduce the Japanese text, either heavily cropping the images, or replacing them with still frames entirely. An international opening is also included, which amusingly features the original film grain, and overall has a pleasing, filmic look. If only they’d chose to follow this path with the entire video transfer. 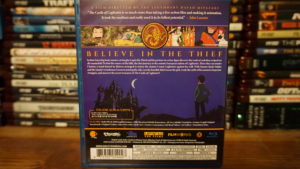 A series of interviews with major production members, including series creator Monkey Punch and David Hayter, are featured, as well as a introduction to the film by David Hayter, in which he highlights the importance of the film’s release, and its influence. The interviews from Japanese members of the production, while short, are informative, where they discuss the things that led them to working on Lupin, and their thoughts on Miyazaki, and working with him. The interviews with the two English leads from the 1992 and 2000 dubs talk mostly about their influences, and how they ended up working on the film, and their thoughts on the process and importance of working on a Miyazaki film. 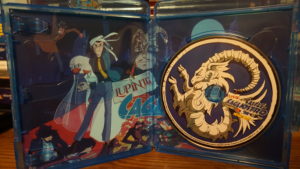 The entire collection of storyboards for the entire film are included as an extra feature, as well as a large collection of concept art, and various other pieces of art related to the production of the film. A commentary is included, recorded in 2014, which talks about the movie, and historical features of the film, and all sorts of important tidbits about the movie. The commentary is delivered in an engaging manner, and is worth at least a single listening. Overall, this set has an exhaustively comprehensive set of bonus features, perfect for fans of the film. 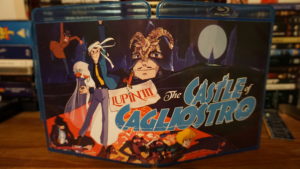 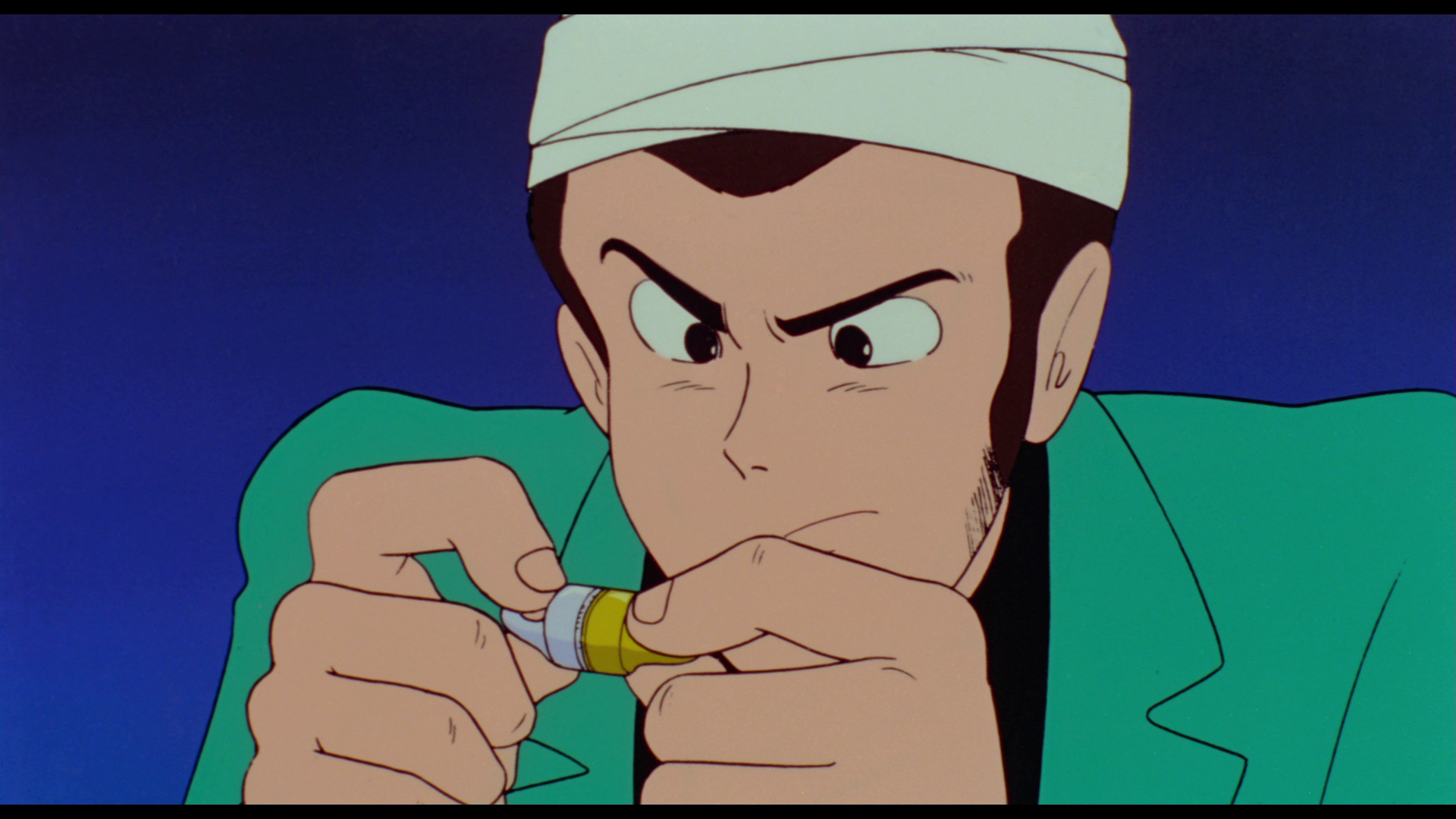 This release of Hiyao Miyazaki’s The Castle of Cagliostro features an incredible set of bonus features, a large quantity of audio productions, and a less than thrilling video transfer. If anything, the video transfer is the only weak link in the Blu Ray release. The film is fun, fast, and lighthearted, and although it isn’t as thought provoking as later Miyazaki works, it works incredibly well as an action-adventure romp. This, “collector’s edition,” comes with an enthusiastic recommendation, based on the strength of the film, its packaging, and its special features.