The Texas Chainsaw Massacre franchise has had a solid run of over 40 years, featuring seven films with varying degrees of critical and box office success. I have seen every one of these films (even the corny 3D sequel from 2013, which is a guilty pleasure of mine), and the second installment in the series, aptly titled Texas Chainsaw Massacre 2 (TCM2 for purposes of this review) is certainly the most unique film in the franchise.

It is extremely difficult to compare Texas Chainsaw Massacre 2 to the rest of the Texas Chainsaw Massacre films as it has an entirely different tone than anything else in the series, even though director Tobe Hooper was back at the helm. There is a much more colorful and “comic-book” feel to the way the sets were designed, and the antagonists feel so much less threatening than in the original 1974 classic. In fact, there are several laugh-out-loud moments in scenes featuring Leatherface and his disturbed brother, Chop-Top, who is a freakishly great character and my favorite part of this movie.

The protagonists in this film, Stretch, a young female radio DJ captured by the cannabilistic Sawyer family, and Lefty, the grizzled veteran Texas lawman out for revenge, are also excellent. Stretch is a highlight as the leading lady, and her awkward sexual tension with Leatherface is absolutely one of the most hilarious yet disturbing parts of the film. There’s only so much lip-licking you can do while wearing someone else’s face and still look sexy. It’s a fine line. 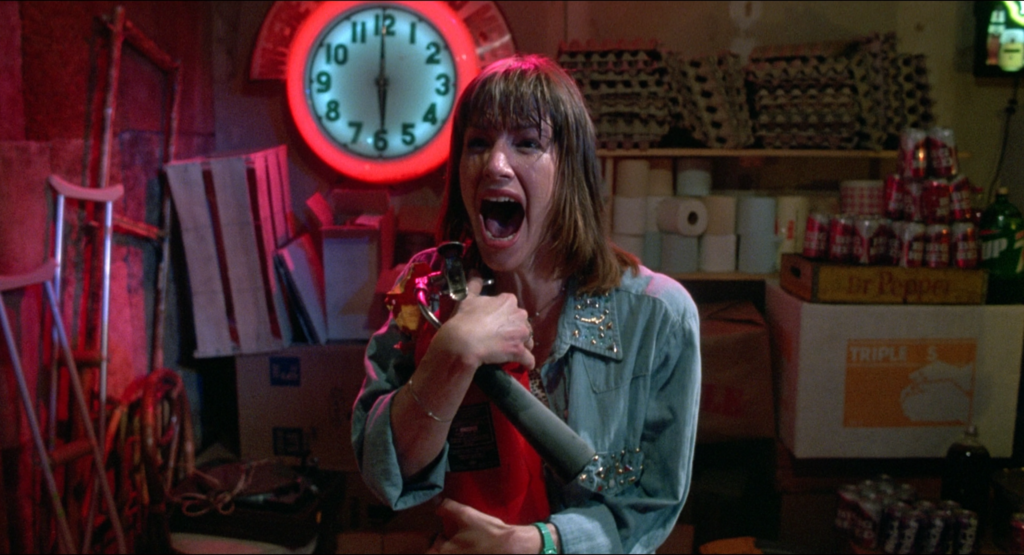 The film follows Stretch, who has the unfortunate experience of listening to one of the Sawyer’s killings live on air from a phone-in caller on her radio show. After talking to Lefty about helping to break open the murder case and airing the recorded audio during prime time, she is taken by the Sawyer family. Lefty follows in hot pursuit, wielding a chainsaw himself to take down the Sawyers in their hidden lair, and old abandoned amusement park. Texas Chainsaw Massacre 2 is a wild ride, full of gruesome moments, hilarious one-liners, an excellent cast, and one of the most epic final battles in any horror movie, ever. 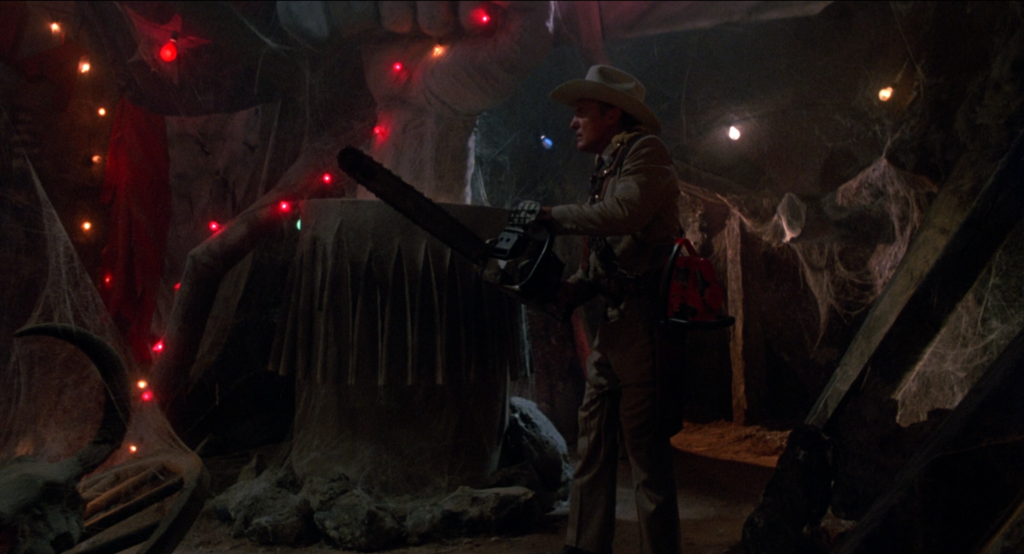 I enjoyed this one a lot, and as a standalone, it is one of my favorite horror movies. It’s a far cry from the original, so some hardcore slasher fans may be disappointed, but this is one sequel that does not require a prior knowledge of the characters or the story because it is so unique in its own right, and I find that to be refreshing in today’s age of countless generic sequels, remakes, and reboots.

I know we sound like a broken record on any Scream Factory review, but they really set the bar high and always meet expects  for Blu-ray transfers on their trademark “Collector’s Edition” series. TCM2 is no exception. The picture is beautiful. There are two different Blu-ray transfers available on this release. On disc one, there is a new 2016 2K HD scan direct from the interpositive film elements, which means that it isn’t straight from the camera negative back in 1986, but it is the next best thing. On disc two, there is MGM’s original HD Master, which was previously available on releases like Arrow Video’s TCM2 Special Edition, and was the only HD master available until Scream Factory took their turn. 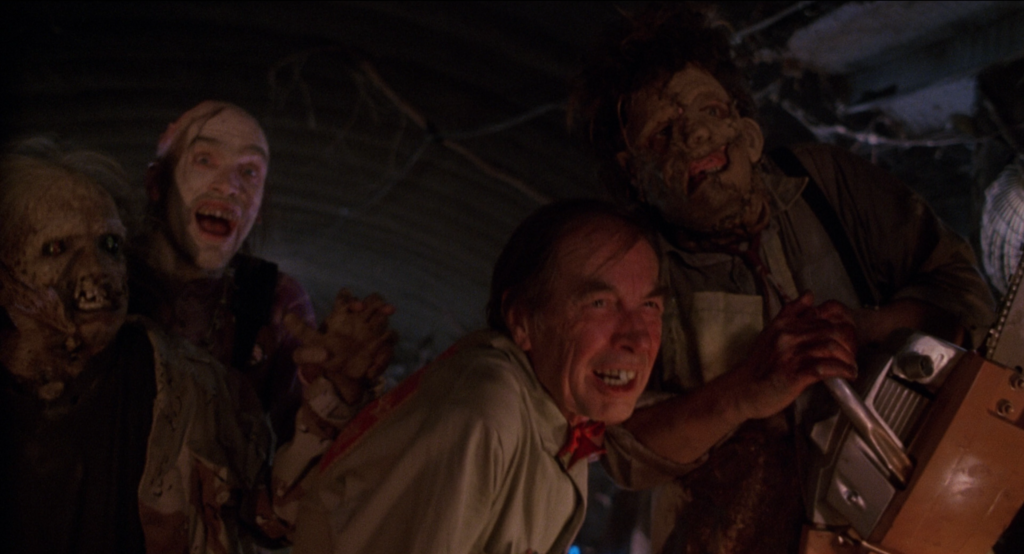 Personally, I think Scream’s transfer is better and cleaner, but I’m not sure that someone with a trained eye in a blind test could determine the difference. Personal preference may lead you to choose your own favorite – they are both very nice, but I do think Scream’s new 2K scan will be preferred for its color, clean transfer free of artifacts, and smooth image. Honestly, although TCM2 is now 30 years old, this transfer makes it look as if it could have been filmed within the last 10 years. It is that smooth. This will absolutely be one of the best looking horror films from this time period in your collection.

For as good as the picture is, the audio on this release is the little brother who lives in his older brother’s shadow. That is to say, it’s fine, but comparatively, it’s weak. We do get a new DTS-HD Master Audio 5.1 track, but I found myself doing a lot of adjusting to try to find a nice balance between dialogue and action. There were multiple instances where I had cranked the volume to hear the dialogue a bit better, and then a revving chainsaw from the background would blow me off of the couch.

I do give props for the attempt at a new surround sound 5.1 audio track, as that is something new to Scream’s release and is always a welcome addition to older films. Previous releases of Texas Chainsaw Massacre 2 included only a 2.0 stereo track, and so I think that the transfer to 5.1 probably caused some of the audio balance issues I was experiencing. That being said, the more immersive experience was worth the few adjustments, but the DTS-HD Master Audio 2.0 track is also included in the audio options if you choose to go that route. Again, not a terrible audio track, but not near as perfect as the picture quality.

As is the standard with Scream Factory Collector’s Editions, Texas Chainsaw Massacre 2 comes with a beautiful slipcover. These slipcovers are always extremely limited, so if you like the artwork, make sure you order it soon to have any chance at getting one. The artwork featured on the slipcover was also available as a limited edition poster with a pre-order direct from Scream Factory, but those have sold out. You can probably find one on eBay if you want it/need it to complete your set, but you’ll be paying a premium for not pre-ordering.

On the inside, we have a double-sided standard case containing two Blu-ray discs which feature some really great disc art, something which is severely lacking in today’s Blu-ray market. We also have reversible artwork for the front and back sleeve, with one side featuring the newly commissioned artwork seen on the slipcover, and the reverse side featuring the original theatrical artwork. This is standard with all Scream Factory Collector’s Editions, and is always a fun choice for the owner to make. 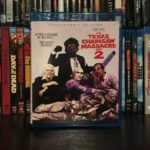 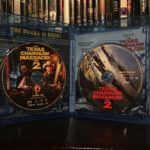 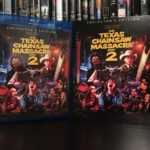 Overall, as always, Scream Factory treats collectors right with meticulous detail on their artwork and packaging, from the slipcover right down to each individual disc.

With the huge list of features available on this two-disc set, what more could a Texas Chainsaw Massacre fan ask for? Scream Factory always provides great audio commentaries and exclusive features, and this release of TCM2 is absolutely one of the most comprehensive they have ever had in terms of features. Items marked NEW are exclusive to this Scream Factory release and will not be found on any other version of Texas Chainsaw Massacre 2. As follows: 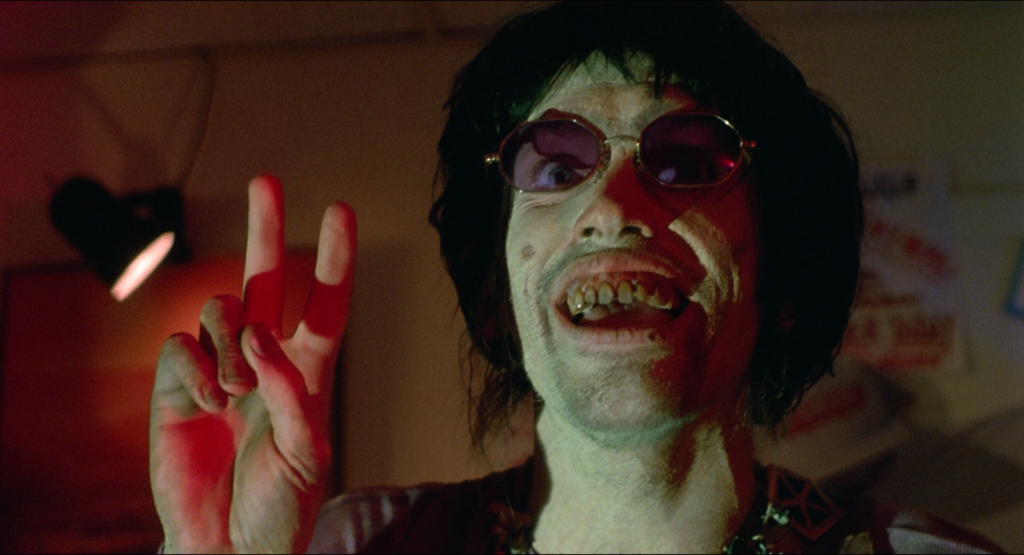 I really enjoyed this release, and it just missed a perfect score for two reasons. One, I cannot give the corny sequel to a masterpiece a perfect score in my head. I won’t allow it. Two, the 5.1 track was a bit of a let down. It is cool to finally have an immersive audio experience for this film, but I think that the 2.0 track is the better option because of the weak balance between channels on the 5.1 track. Other than that, the slipcover is gorgeous, the special features are top notch, the picture quality is as good as any horror film, modern or not, will look, and it is a very enjoyable film, albeit in a much different way than the original 1974 classic. I highly recommend this Texas Chainsaw Massacre 2 Blu-ray release from Scream Factory, and suggest picking it up shortly if you want the highly coveted slipcover. 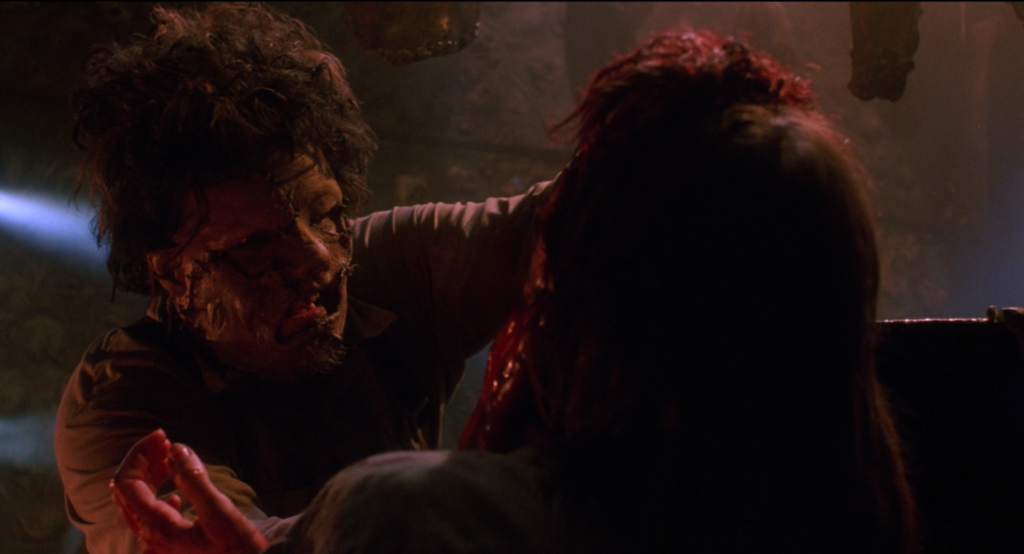