The Terror is a British horror drama anthology television series that premiered on AMC on March 25, 2018. The series is named after Dan Simmons’ 2007 best-selling novel, a fictionalized account of Captain Sir John Franklin’s lost expedition to the Arctic in 1845-1848, which serves as the basis for the series’ first season. On June 22, 2018, it was announced that AMC had renewed the series for a ten-episode second season to premiere in 2019.

After the success of the show The Walking Dead, the American cable TV network AMC had planned to create a horror TV series based on the novel The Terror. In March 2016, it was confirmed that AMC had ordered 10 episodes of the show, with an expected premiere date in 2018. David Kajganich and Soo Hugh serve as co-showrunners, while Kajganich penned the adaptation. Ridley Scott, Alexandra Milchan, Scott Lambert, David W. Zucker, and Guymon Casady serve as executive producers. In September 2016, it was announced that Tobias Menzies was cast as the series lead and the showrunners were seeking an Inuit woman, between the ages of 16-30, to play an unspecified ‘major character’, most likely Lady Silence.

The series begins with the Royal Navy’s polar explorer ships, the HMS Erebus, and the HMS Terror having recently left Beechey Island, and are heading south toward King William Island into uncharted territory, seeking the Northwest passage. The ships are soon stuck, frozen and isolated, and those aboard must survive the harsh weather conditions and each other, while being stalked by an elusive menace.

According to the review aggregation website Rotten Tomatoes, the series has an overall approval rating of 93% based on the 40 reviews that have been submitted, with an average rating of 8.83/10. The website’s critical consensus reads, “A thriller wrapped in a prestige drama package, The Terror makes for gripping, atmospheric supernatural horror.” 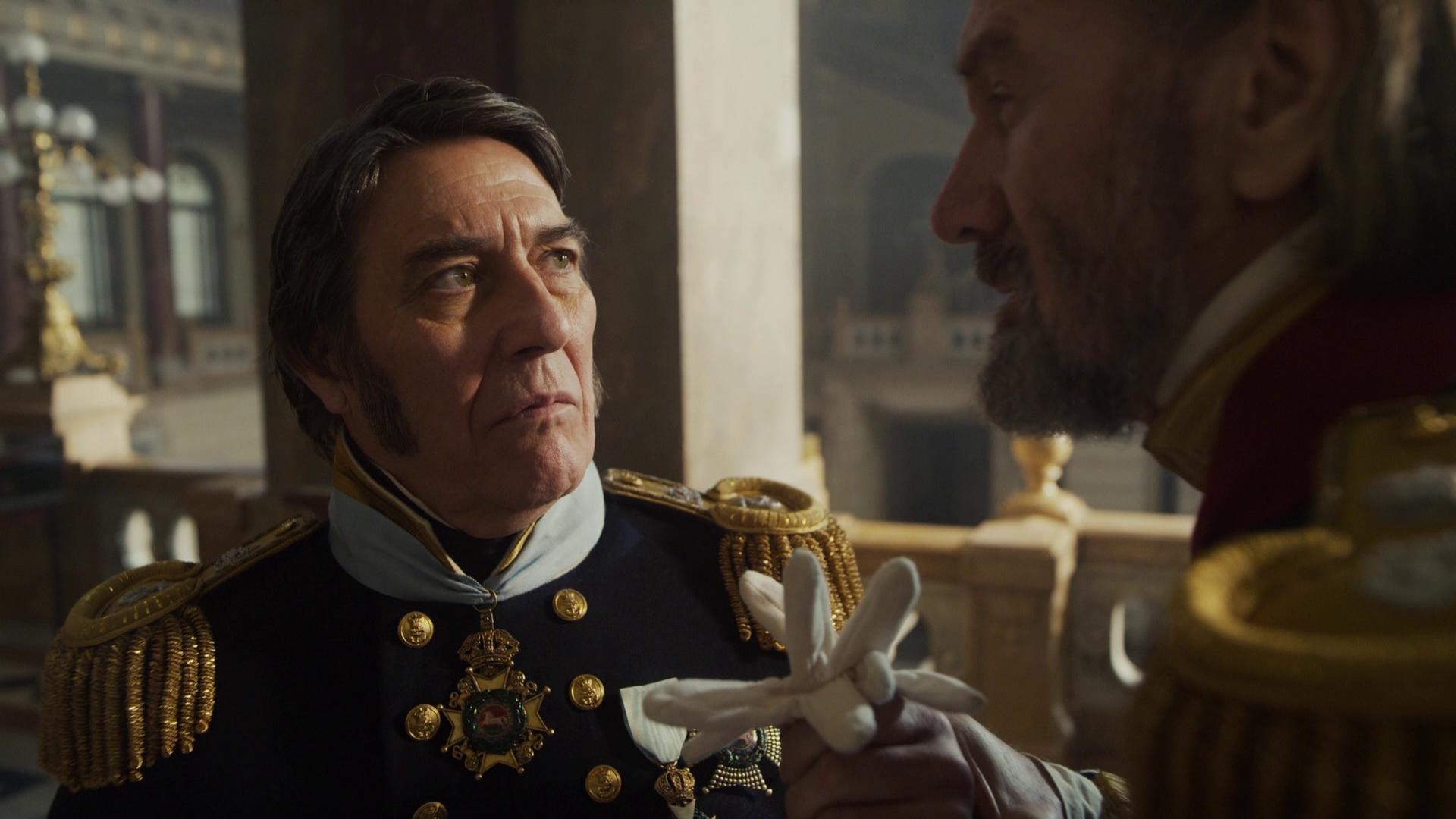 Inspired by true events, The Terror: Season 1 provides audiences with what has been quoted as being a lavish experience that combines the likeness of Master and Commander with The Thing.  While it’s certainly not as exciting as the mention of that combination promises, this is a show that once that initial foundation is set, things really start to get pretty crazy.  As my wife and I watched through it over the past few days, we found ourselves wondering what was going to be happening, finding ourselves in a position where we really couldn’t hit that pause or stop button to take a step away from the television to do our normal adult things.  The subtle scares that were used in the series was more than enough to suck you in right from the get-go, making sure that your eyes do not leave the TV so you don’t miss a single thing. 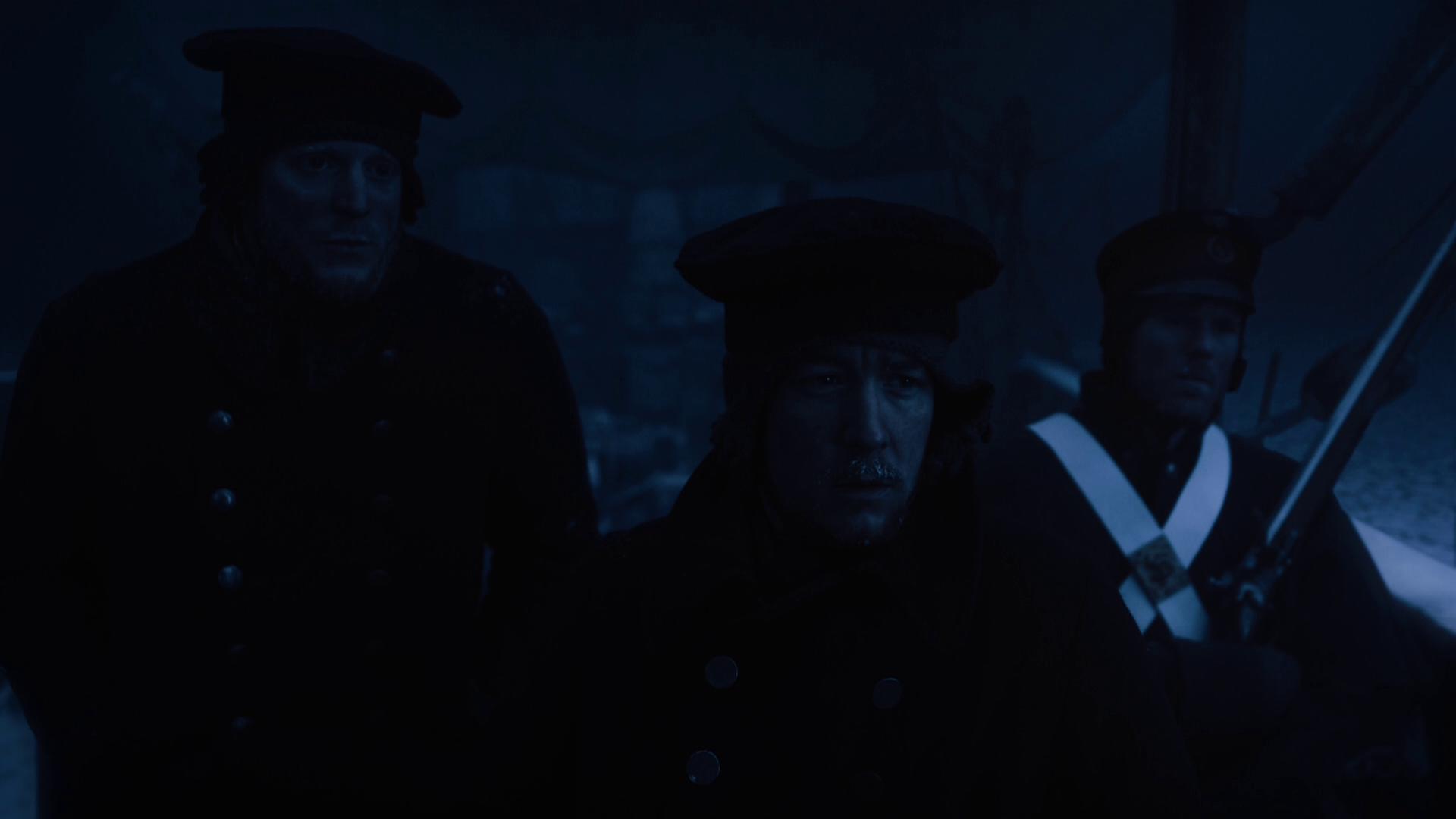 Season 1 of The Terror is made available by the folks over at Lionsgate Films and AMC Studios with a 1.78:1 presentation.  Offering a beautiful, sleek and distinctive appearance, there are two hues that are bounced back and forth between with this series.  It bounces back and forth between a variety of blues for the colder, and more exterior shots, as well as a variety of warmer browns.  As you watch through this show, the attention to detail that the production crew put into making this was considerably high, especially given the fact that it was shot in Hungary and Croatia, you can tell that a lot of the scenic views weren’t digitally created on a green screen, as it gives what feels to be a more authentic experience of the barren location that the crew finds themselves to be stranded in.  There are some exterior sequences that are carried out that appear to have a slightly smoother visual presentation as the shades of blue appear to be masking some of the finder details.  However, it doesn’t distract from the overall experience too terribly, allowing for an interesting visual performance that looks really damn good on any high-definition television. 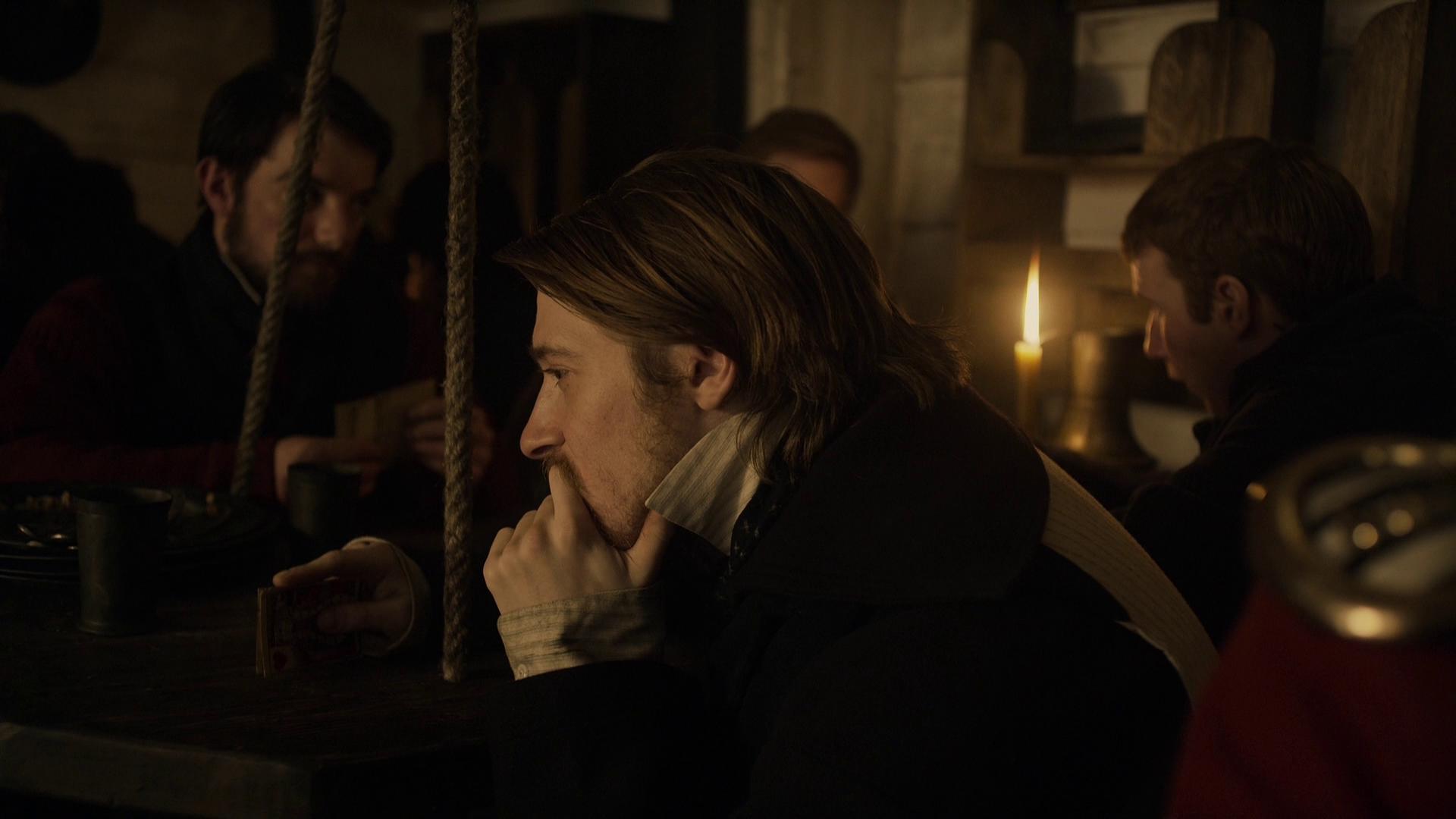 Bundled with a Dolby True HD 5.1 audio mix, Season 1 of The Terror offers a presentation that features a nicely done range of sound effects that are clearly audible throughout each episode.  There are a handful of subtle, yet very audible, moments that provide a decently done surround experience as well as a considerably forceful low-tone.  While I do think that the series would have fared significantly better had they opted to include the surround channels, they certainly did a fantastic job at emulating it, allowing for the experience to be one that’s powerful, and generally conveys even the smallest amount of fear that the ships crew had experienced.  The dialogue is spoken cleanly and clearly, allowing everything to be heard and understood without having to manually adjust the volume levels as it progresses onward. 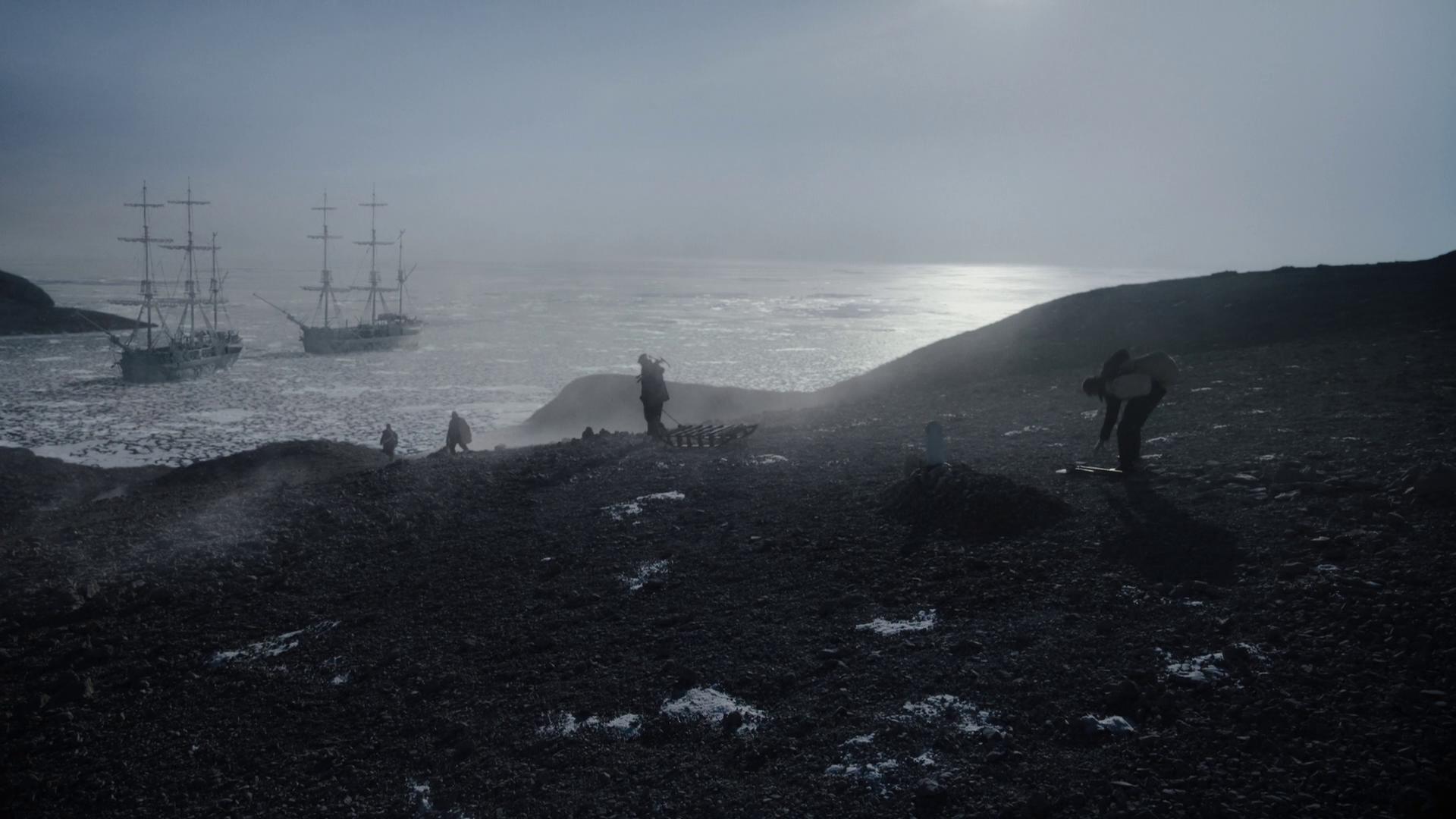 The Blu-ray release of The Terror: Season 1 comes packaged in your standard three-disc Blu-ray amaray case.  Within that case are the three standard BD-50 Blu-ray discs that features the episodes and special features respectively.  Unfortunately, none of those discs feature any artwork that’s related to the series outside of the standard release text and considerably generic blue background.  There are no DVD copies included with this release; however, there is a digital copy redemption pamphlet that has been included for the various streaming platforms.  There is also a slipcover that’s been made available during the original pressing of the release that features the same artwork that has been provided on the case art. 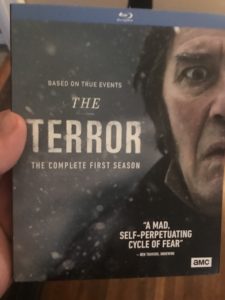 There are only a few special features that have been included with this release of The Terror: Season 1.  The content, while minimal, offers a small look at the series itself as well as the work that went on behind the scenes.  I do think that there could have been more included, especially more of a behind the scenes look.  But, the content that has been provided were a decent touch.  I just hope that we get to learn more as the show eventually launches into additional seasons in the future, and they continue to release this series on to home media.  Included with this release is: 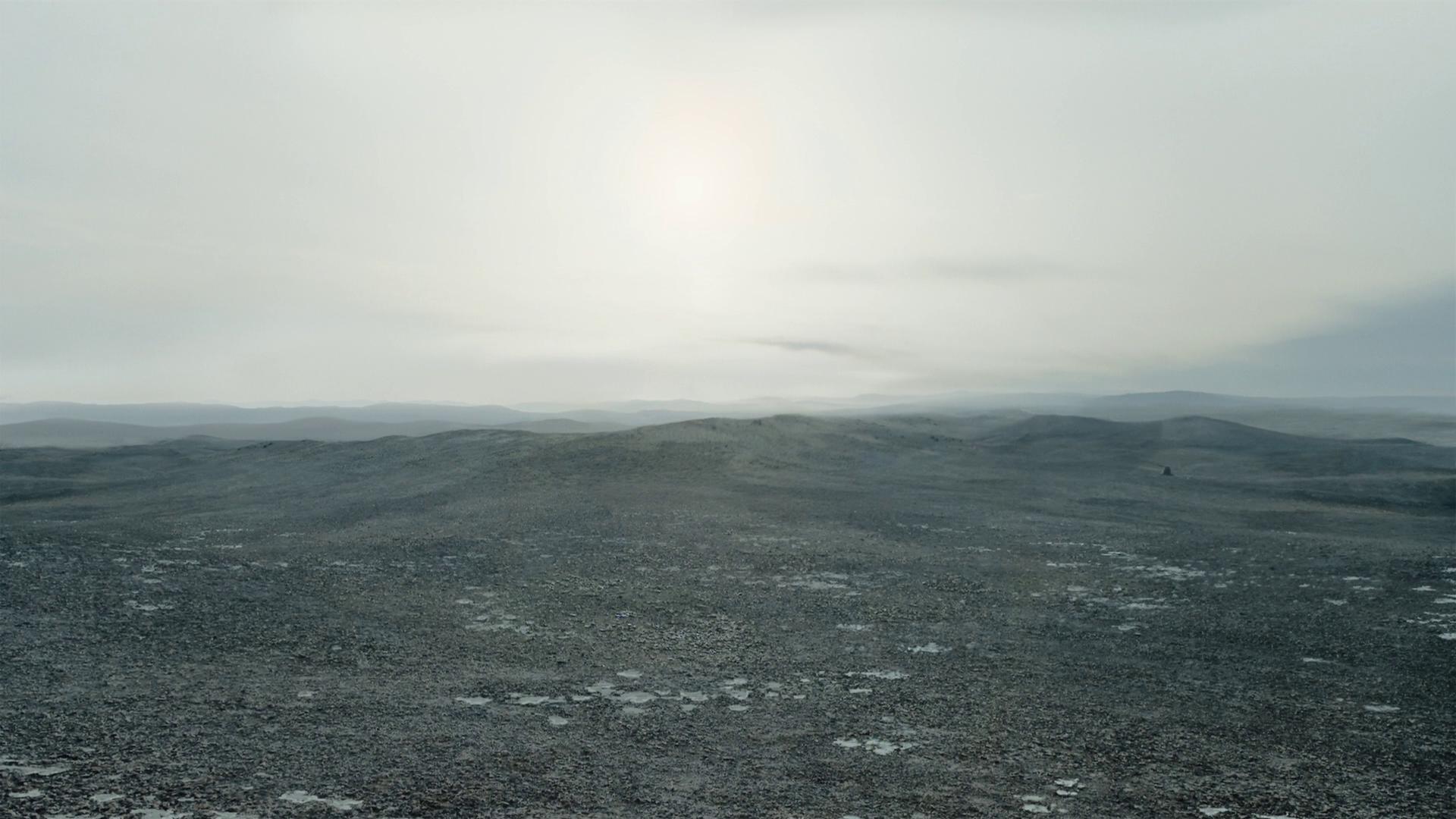 Overall, I found that Season 1 of The Terror allowed for one hell of an experience.  Being one of the few shows that I’ve watched from AMC (besides Breaking Bad) my wife and I thoroughly enjoyed the story that was offered with it, as well as the experience and overall presentation.  Despite the lack of the use of the surround channels in the audio mix, the presentation of the visuals and the sound were considerably robust, and very detailed as they suck you in right from the start, and maintains that attention through until the end.  If you’re considering grabbing this release for your personal collection, I would absolutely recommend it.  The Terror: Season 1 will be available on Blu-ray and DVD beginning on Tuesday, August 21, 2018. 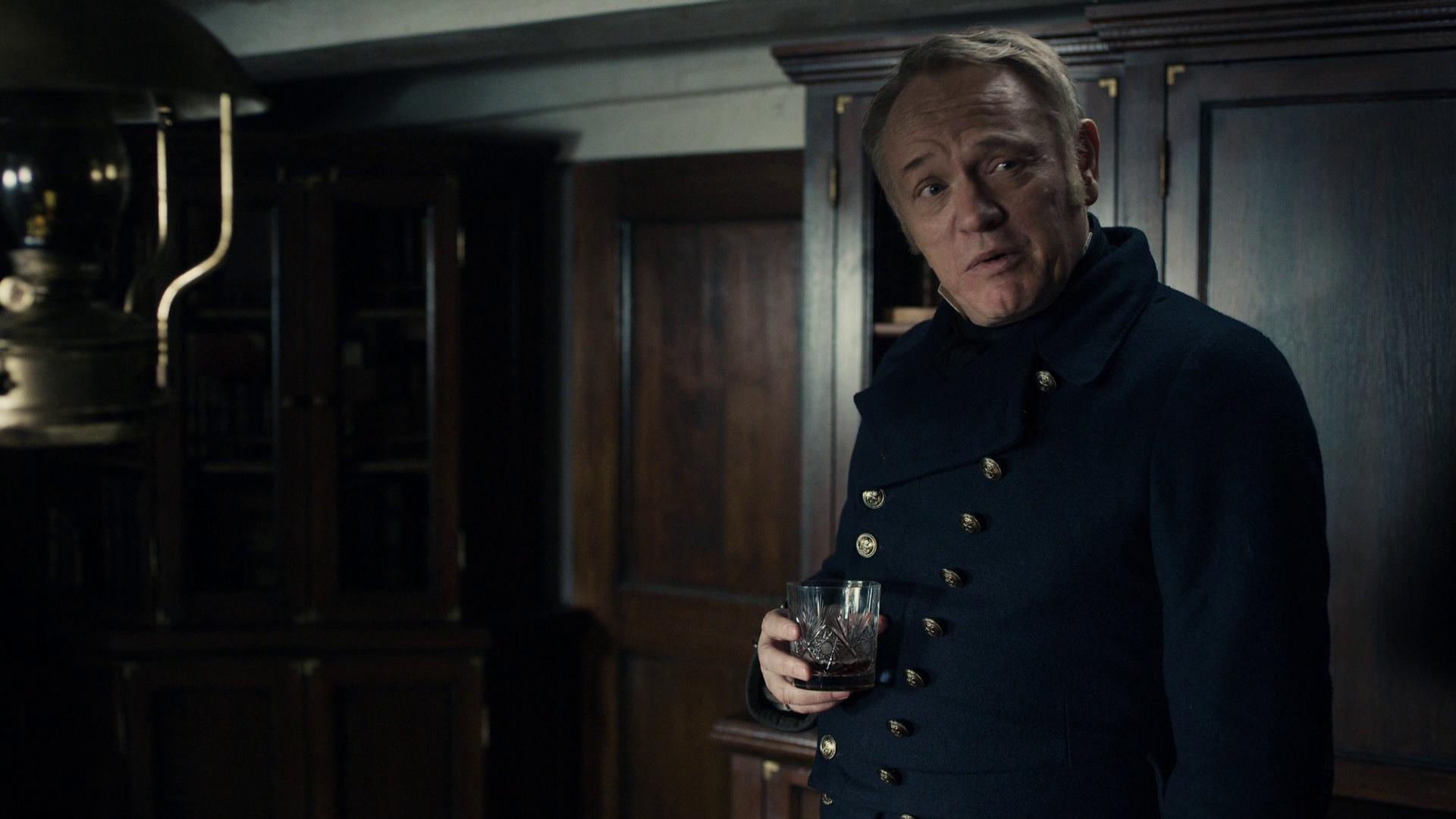