Terminator 2: Judgement Day (also referred to as Terminator 2 or T2) is a 1991 American science-fiction action film that was co-written, produced and directed by James Cameron. The film stars Arnold Schwarzenegger, Linda Hamilton, Robert Patrick, and Edward Furlong as its principal cast. It is a sequel to the 1984 film, The Terminator, and the second installment in the Terminator franchise. Terminator 2 follows Sarah Connor and her ten-year-old son, John, as they are pursued by a new, more advanced Terminator, the liquid metal, shapeshifting T-1000, sent back in time to try and kill John Connor and prevent him from becoming the leader of the human resistance. A second, less advanced Terminator is also sent back in time to protect John.

After a troubled pre-production process that was characterized by legal disputes, Mario Kassar of Carolco Pictures emerged with the franchise’s property rights in early 1990. This paved the way for the completion of the screenplay by a Cameron-led production team, and the October 1990 start of a shortened 186-day filming schedule. The production of Terminator 2 required a budget of approximately $100 million making it the most expensive film made up to that point. Much of the film’s massive budget was spent on filming and special effects. The film was released on July 3, 1991, in time for the U.S. Independence Day weekend. In 2017, Terminator 2 was re-released in 3D and 4K UHD resolution for AMC and Cineplex theaters. The re-release debuted at number one in the United Kingdom during the weekend of its release.

The film’s visual effects saw breakthroughs in computer-generated imagery, including the first use of natural human motion for a computer-generated character and the first partially computer-generated main character. Terminator 2 was a critical and commercial success and has since influenced popular culture, especially the use of visual effects in films. It has received many accolades over the years, including four Academy Awards for Best Sound Editing, Best Sound Mixing, Best Makeup, and Best Visual Effects. The highest-grossing film of 1991 and of Schwarzenegger’s career, Terminator 2 has since been ranked by several publications such as the American Film Institute as one of the greatest action films, science fiction films and sequels of all time. The film was followed by another sequel in 2003 entitled Terminator 3: Rise Of The Machines, and the upcoming sixth film in the series will serve as an alternate sequel to the film and reboot the series from Rise Of the Machines onwards, slated for a release in 2019. 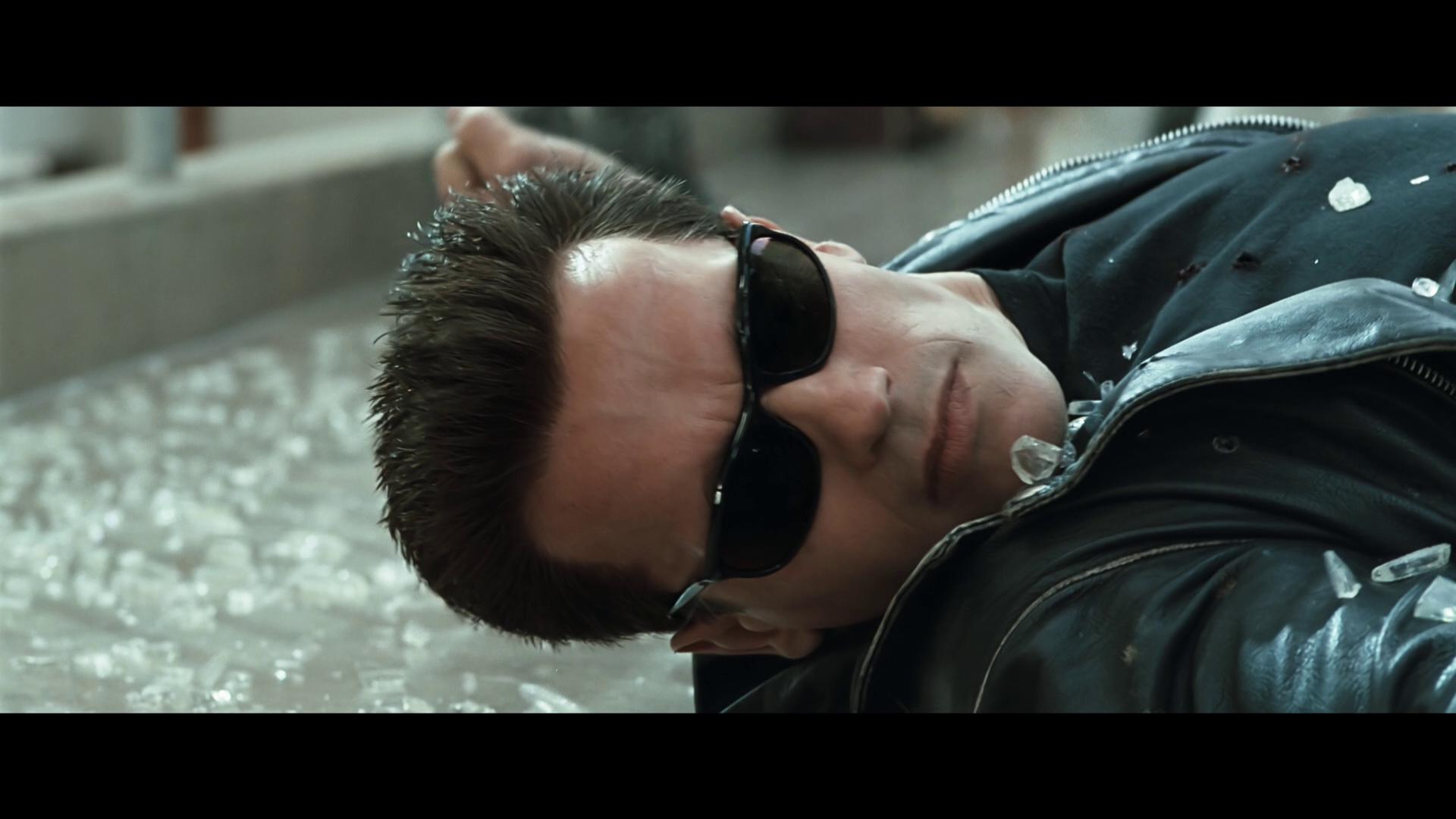 Terminator 2: Judgement Day is a movie that has always had a special place in my heart.  Growing up with this film and its predecessor, they’re ultimately what had gotten me interested into the genre.  Sure, there are a fair share of plot holes that come with this film; but the performances of all that were involved more than make up for it and allow for a really good time to be had by anyone that’s watching it.  In fact, my wife had absolutely zero interest in watching this with me the other night; once we got past the introductory part of the movie, she was fully invested and could not look away from the television.

Terminator 2: Judgement Day is a movie that has, for a very long time, received a lot of complaints; enough that it’s been said among film enthusiasts that this title is “cursed”. Most videophiles will have two major complaints about this newest release. The first being the fact that there is a complete lack of “original feel” or film grain, and that in some of the scenes, there is a slight greenish tone that were there previously. However, if you are able to look past those two things, the presentation that’s offered with this release is significantly smoother, and allows for a more modern feel to the overall experience. Various parts ranging from the visibility of the endoskeleton to the general liquidity of the T1000 really shine in this release. The color tones of this specific release allows for everything to feel much crisper, providing audiences with a very clean experience.

I’ve seen this release get a significant amount of hate for it’s excessive amounts of Digital Noise Reduction, I do feel that I should go on to say that I am personally not a huge videophile who will give heavy criticism on this release; mostly because the visual presentation felt very similar to that of when I was a kid and I had first seen this movie. If you’re not too overly concerned about that and want to re-experience this “remastered” edition, then don’t let anybody’s negative comments stop you from doing so!  I opted to give this section a 3.5 out of 5, as I feel that this release would have been significantly better without the excessive noise reduction, and really offering a much more original feel.  However, that isn’t the goal of the 4K UHD format as the intentions of the format have been to let the film companies present these movies in a way that had been originally planned for or what the studios wanted to try and present when these movies had originally came out. 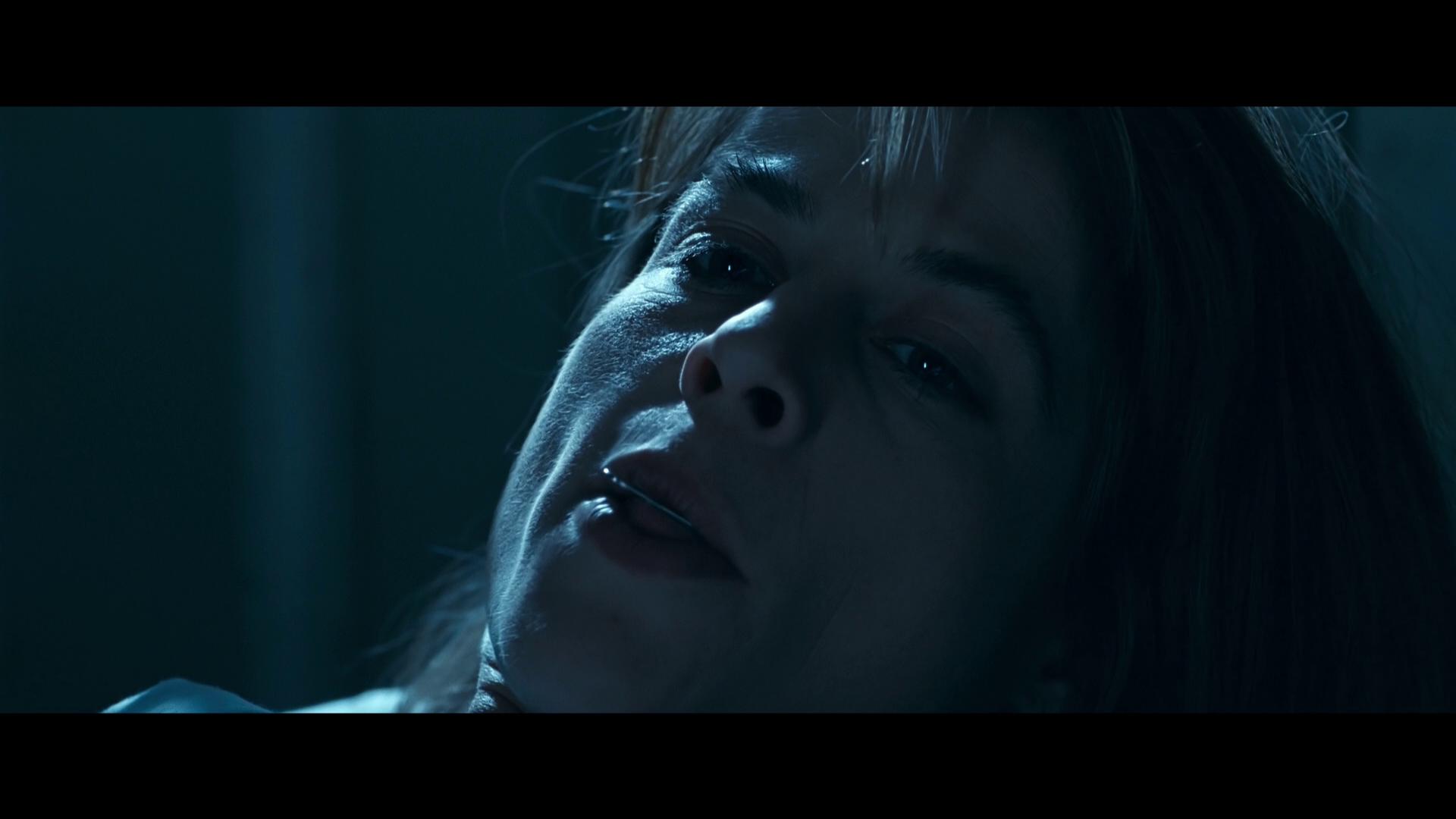 The 4K UHD release of Terminator 2: Judgement Day comes packaged with a DTS-HD Master Audio 5.1 track. In fact, it is the exact same track that was provided on the 2015 Blu-ray release of the film. While there really isn’t anything that’s noteworthy or fresh about the audio experience, as my wife and I watched through this the other night, I found the track to be quite powerful and offering a very nice transition from channel to channel, particularly from the rear and side channels. I do wish that they would have gone the whole mile with this “remaster” and brought in the surround elements for a more immersive experience; but, given the experience with this track, I really didn’t have any complaints. The dialogue is spoken cleanly, allowing for it to be easily heard and understandable, and is considerably prioritized over the other elements of the sound mix. 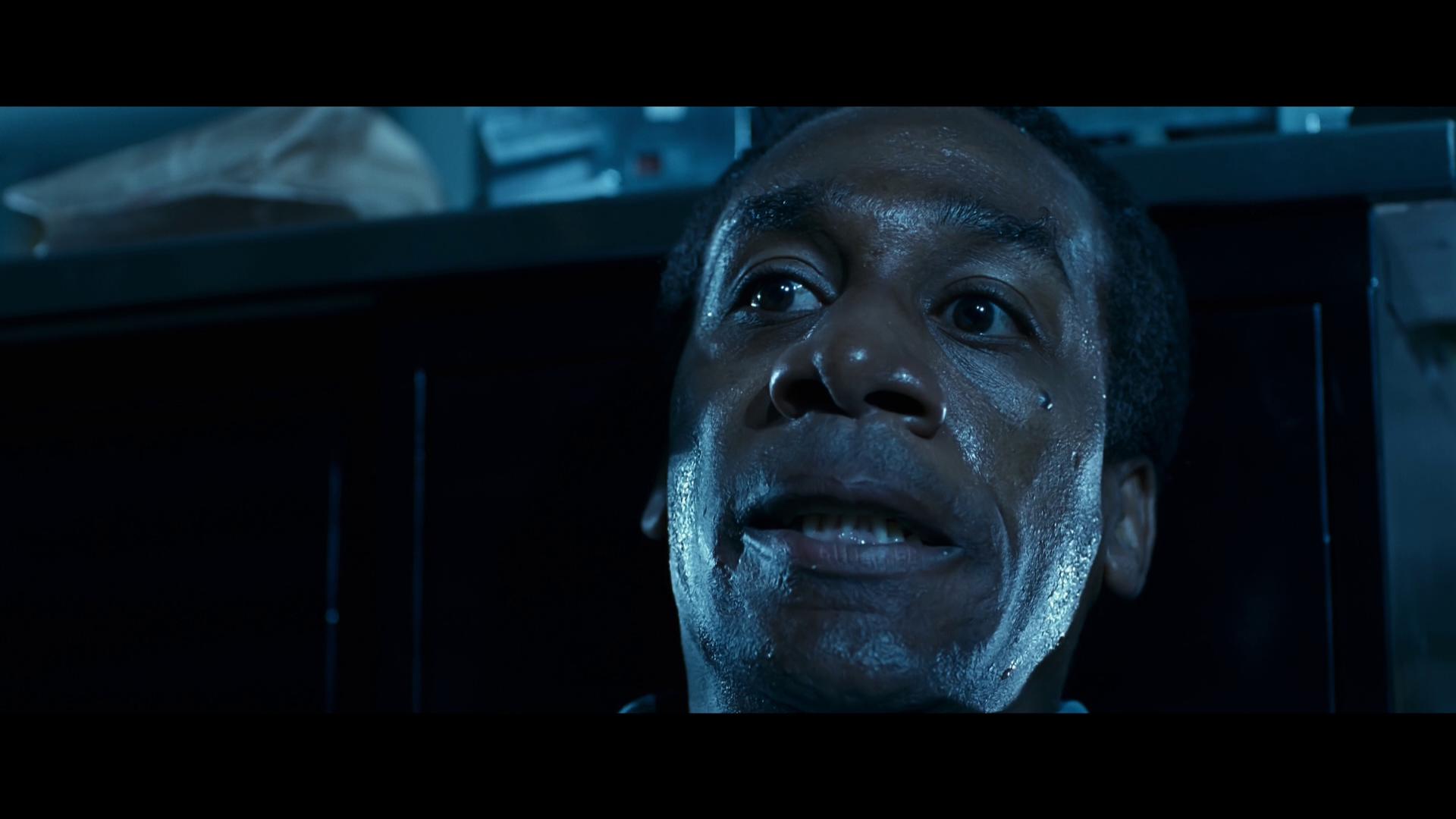 The 4K UHD release of Terminator 2: Judgement Day comes packaged in your standard two-disc 4K UHD amaray case.  Within that case is the standard 4K UHD release copy of the film as well as the standard Blu-ray copy.  Both discs feature a completely different piece of artwork that varies between the two, the case art, slipcover and are still relevant to the film.  There is also a digital copy redemption pamphlet for the various streaming options as well as a slipcover that was made during the original pressing of the release.  Also, as of today, there is now the EndoArm Special Edition that includes a model EndoArm from Arnold’s Terminator.  Unfortunately, I can’t comment on the quality of the arm as I do not have one in my possession. 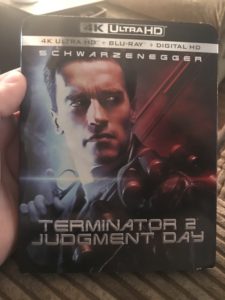 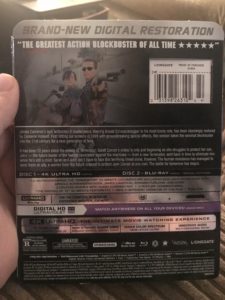 Unfortunately, the 4K UHD release of Terminator 2: Judgement Day is just like any other standard 4K release in that the UHD disc does not contain any special features at all.  All included content is made available on the included Blu-ray disc.  That said, the features that were included with this release offers a really extensive look into this film as a whole.  There’s material that covers not only the making of the film, or the behind the scenes work itself; but, some nice variations of the original storyline that wouldn’t normally be seen without exploring these features.  Included with this release is: 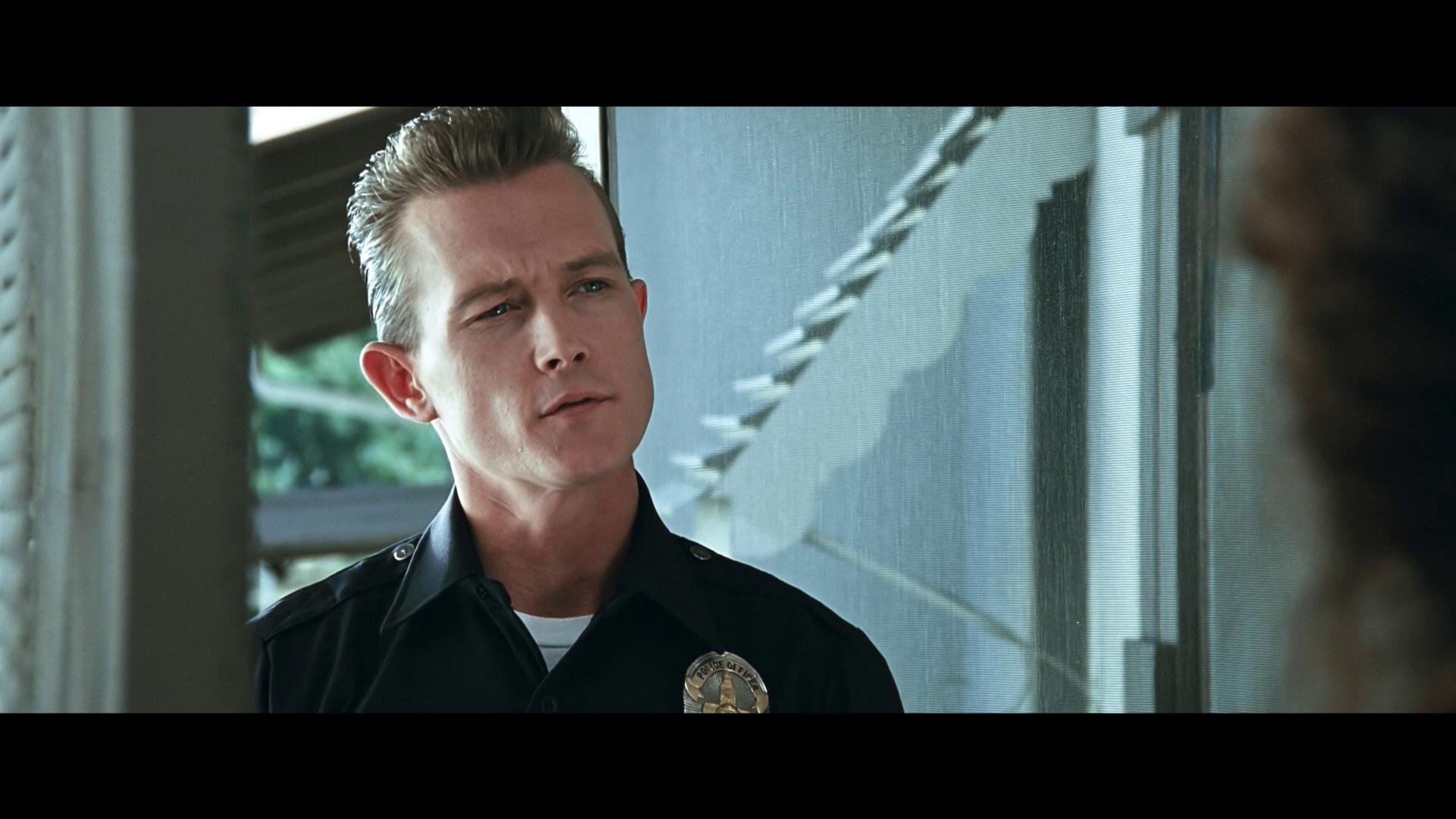 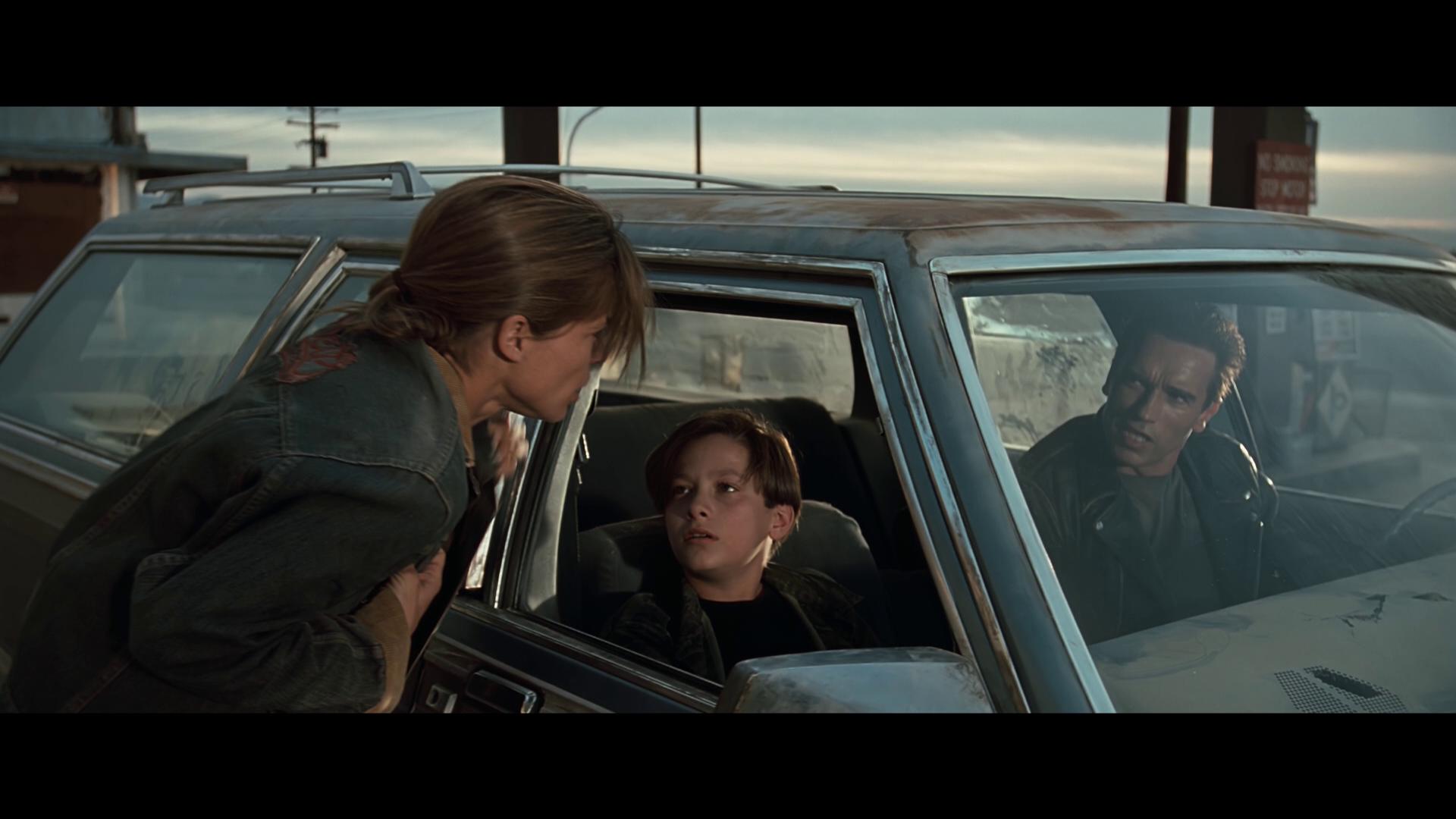 Like I had mentioned previously, Terminator 2: Judgement Day is a movie that I grew up with and will always enjoy a screening of it.  Everyone’s hatred toward this release, I feel that while it’s warranted due to the excessive amount of noise reduction, but not necessarily that it’s justified.  Only the true of the true videophiles really have any reason to complain, and the majority of the whining that I see in the forums are just people who think that they’re “videophiles”.  Overall, the presentation of the 4K UHD release allows for a significantly more modern feel to the movie and its presentation, and I really feel that the added sharpness made the experience that much better.  If you’re considering grabbing this release for your collection, I’d say it’s worth grabbing.  Especially since the disc release alone is going for $13.00 at the time of writing this.  Otherwise, if you’re an absolutely die-hard fan of the film, the EndoArm release is available as of yesterday! 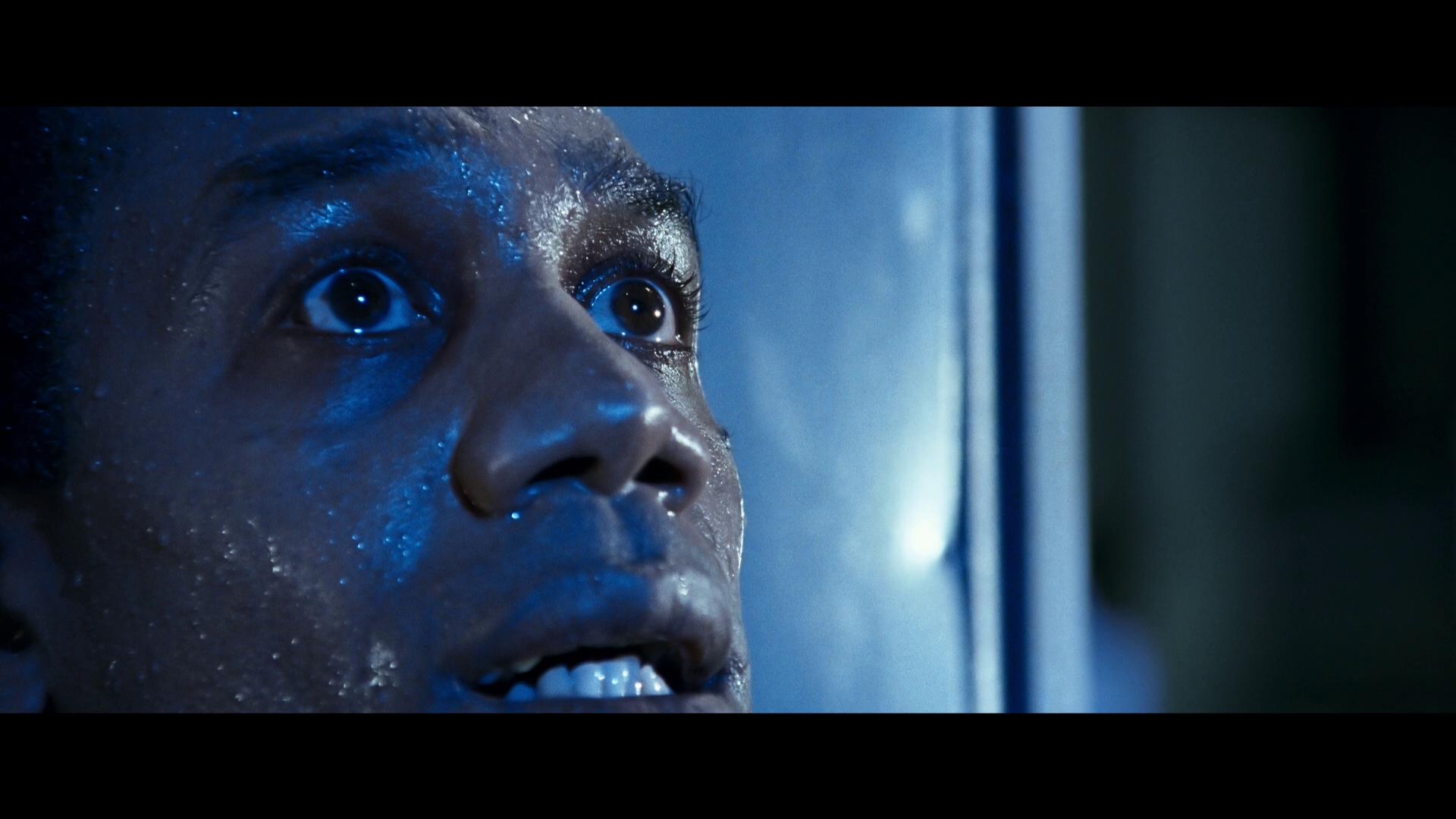