Tenet is a 2020 science fiction action-thriller film that was written and directed by Christopher Nolan, who also produced the film in conjunction with Emma Thomas. A co-production between the United Kingdom and the United States, it stars John David Washington, Robert Pattinson, Elizabeth Debicki, Dimple Kapadia, Michael Caine, and Kenneth Branagh. The plot follows a secret agent as he manipulates the flow of time to prevent World War III.

Nolan took more than five years to write the screenplay after deliberating about Tenet’s central ideas for over a decade. Pre-production began in late 2018, casting in March 2019, and principal photography lasted three months in Denmark, Estonia, India, Italy, Norway, the United Kingdom, and the United States, from May to November. Cinematographer Hoyte van Hoytema shot the film on 70mm and IMAX. Scenes of time manipulation were filmed both backwards and forwards. Upwards of one-hundred vessels and thousands of extra were used in making the film.

Delayed three times because of the COVID-19 pandemic, Tenet was released in the United Kingdom on August 26, 2020, and the United States on September 3, 2020, in IMAX 35mm, and 70mm. It was the first Hollywood tent-pole to open in theaters after the pandemic shutdown, and has grossed $361 million worldwide, making it the fourth-highest-grossing film of 2020. However, it failed to break even due to its costly production and marketing budget, losing distributor Warner Bros. Pictures as much as $100 million. Tenet received generally positive reviews from critics, who praised the visuals, the production, and the cast performance, but criticized the plot and the sound mixing.

Tenet was an extremely anticipated movie for a very long time, and even then, that anticipation only grew with the delays that were a result of the COVID-19 pandemic. As much as I like Nolan’s work, this movie is one that really took the “I think it’s too smart for people” approach that we saw with Inception and increased it tenfold. The entire concept of inverting time through entropy was very appealing; however not your average person is going to fully understand that concept and as a result, they’re not going to be too pleased with the thought. It took a little bit of reading on my part as I wanted to understand what exactly what entropy was because I was pretty frustrated on the first watch. The storyline as a whole is really nicely written and beautifully executed; and the action sequences were absolutely phenomenal from beginning to end. Overall, I really enjoyed the movie, especially more on the second viewing.

As we’ve seen with Nolan’s earlier works, he definitely did his best to recreate the overall IMAX experience for home viewing, and Tenet is without a doubt an exception to his approach. And without a doubt, the visual presentation of the 4K UHD release is simply jaw dropping from beginning to end. The overall visual presentation that’s given is one that cannot go unrecognized as the improvements this movie gets from the HDR components are really what make it great. With a considerably warm presentation that’s bundled with deep, saturated colors, everything simply popped on my living room TV. Overall, everything was able to be seen without any hesitation and this release should serve as another showcase title for your 4K setup.

Packaged with an English DTS-HD Master Audio 5.1 mix, the audio track for Tenet is something that could be best described as being too powerful. Focusing rather heavily on the audio accompaniments of the action sequences, or the parts that were more tense, there were some issues with hearing everything as the movie progresses. I ended up having to go back and re-watch the movie with subtitles so I could catch everything, and the overall experience was much better. Other than the mix issues, those sequences where something’s about to happen really pack a wholesome punch from all channels. And the transitions between each of the channels was pretty effortless.

The packaging of the UHD release for Tenet is that of the standard “dual-hubbed” two-disc amaray case with the right-most hub being a stacked hub.  There is the UHD copy of the movie, a Blu-ray copy of the movie, a separate Blu-ray containing all of the supplements, a digital copy redemption pamphlet and a slipcover that’s been made available in the initial pressing of the release.  The slipcover does feature the same artwork that’s been made available on the case. 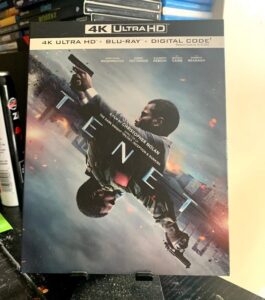 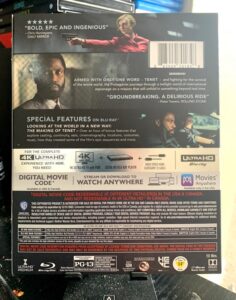 They really knocked it out of the park with the supplements for Tenet.  Not only taking a look into the work that went into making the movie, but expands upon a lot of the questions that went unanswered during the film; as well as some really nicely done highlights on some of the more detailed work that went into the project.  Included with this release is:

Despite having to re-watch the movie and do a little bit of reading to understand entropy (to an extent), I found the overall experience with Tenet to be a wild ride.  Sure, it was way too much packed into the movie that it creates an issue, but the complexities that Nolan brought to the screen with it were quite intriguing.  The visual presentation of the 4K was one of the best I’ve seen so far, but the audio track had its issues.  If you’re a fan of Nolan’s previous work, then I absolutely recommend checking Tenet out.  It is available on 4K UHD, Blu-ray and DVD today.