I’ll never forget sitting in the movie theater back in early 2010, waiting to see Iron Man 2, when the very first trailer for Super 8 premiered. I saw Steven Spielberg’s name attached to it, along with J.J. Abrams’, and I went ecstatic. I don’t believe there were any films I saw as a child that were more defining to my imagination and personality than those of Mr. Spielberg’s direction. Close Encounters of the Third Kind, E.T., Jurassic Park; all these films taught me that kids do have a special sort of power, a particular innocence that allows them to see through the greed and corruption that all too often takes hold of us (without us even noticing sometimes) as we age. Super 8 pays homage to this timeless moral, and thanks to Abrams, introduces that style of filmmaking to a new generation of movie-goers while still remaining brilliantly nostalgic to those who remember Spielberg’s early works.

The actual plot of Super 8 draws a great deal of influence from previous works in the Spielberg-style of science fiction, but places it’s own spin of originality on the story and characters to create a work of novelty. A group of young teenagers working on a Super 8 film for a competition accidentally witness a catastrophic train wreck, and soon come to realize they have involved themselves in something mysterious, and possibly quite dangerous. Strange disappearances of pets, engines, and other appliances begin to overtake the small town the children live in, and military personnel also begin arriving and are apparently in search of something, though what for is unknown. Throughout the confusion, a romance begins to form between the film’s two main characters, Joe and Alice, but there is conflict between their parents due to Alice’s father being involved in the death of Joe’s mother. The kids also slowly begin to uncover the reason for the military’s presence in the town; the crashed train contained an extraterrestrial lifeform that has escaped.

Super 8 conveys its tale in a very cinematic fashion. From the camera angles to the close-ups, to the trademark Abrams lens flares, to the progression of the story, the film has a highly polished feel to it. As it does hearken back to the Universal blockbusters of the late 70s and 80s, this is a welcome stylistic choice, though it can distract from realism at times. 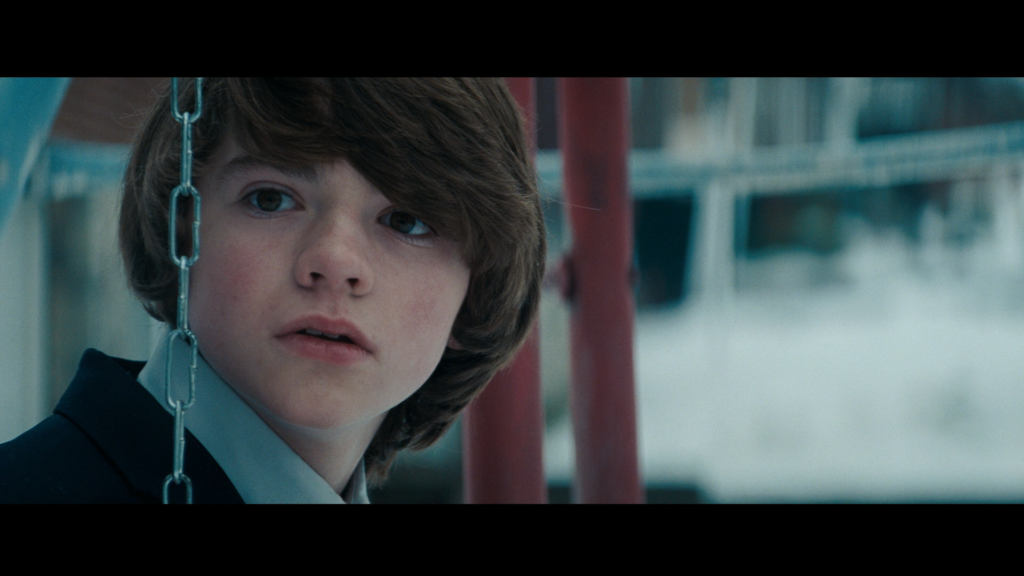 Effects-wise, Super 8 is simply stunning. The CGI utilized in the film, especially for the train derailment, is breathtaking even for being five years old, and constructs a surprisingly realistic and chaotic atmosphere for that scene. Other digital effects, from the ferocious creature to floating washing machines, are on point, and fit the mood of the film well. At times it may seem just a tad overdone, and there are few scenes which probably could have benefited more from a practical approach to the effects rather than digital, but overall I would consider Super 8 exemplary in terms of its special effects.

What I love most about the film is its definitive charm. It exudes the late 70s flavor with it’s grainy picture, bright colors, and superb set design, and overall it portrays a simpler time with a lack of electronic presence and modern influence. I would’ve liked to see a deeper glimpse into some of the characters’ identities, but generally people’s personalities are demonstrated effectively to create characters that are worth caring about and that are capable of development. And as stated before, all these elements contribute to create an effective homage to the classic Spielberg style that has not been so present since the mid 90s. I feel for a lot of people, that is honestly enough (though I do appreciate that there is an actually solid film to go along with the nostalgia). I cannot deny that just watching kids ride around on bikes, chasing after aliens, and running from corrupt government agencies is sufficient to draw an emotional tear or two from my eye, but from a more objective standpoint, there is enough competent storytelling, acting, drama, eye-candy, and atmosphere to warrant praise.

Super 8 is an absolute treat to watch on Blu-ray, and is possibly one the most theatrical-looking home releases I’ve seen. It almost seems like nothing has really been sacrificed from the original theatrical presentation; the picture has that cinematic crispness to it, along with a layer of grain that completes the image. Colors are vivid, but the whole film also has a subtle layer of warmth over it that hearkens to a late 70s style of imagery. Certainly, this is one of the better modern productions utilizing a more retro approach to the picture. There are also a multitude of nighttime scenes that have not surrendered any clarity or visual splendor; they too are also crisp and colorfully dynamic, whereas night shots in other films sometimes have a loss of “life,” appearing more bland. 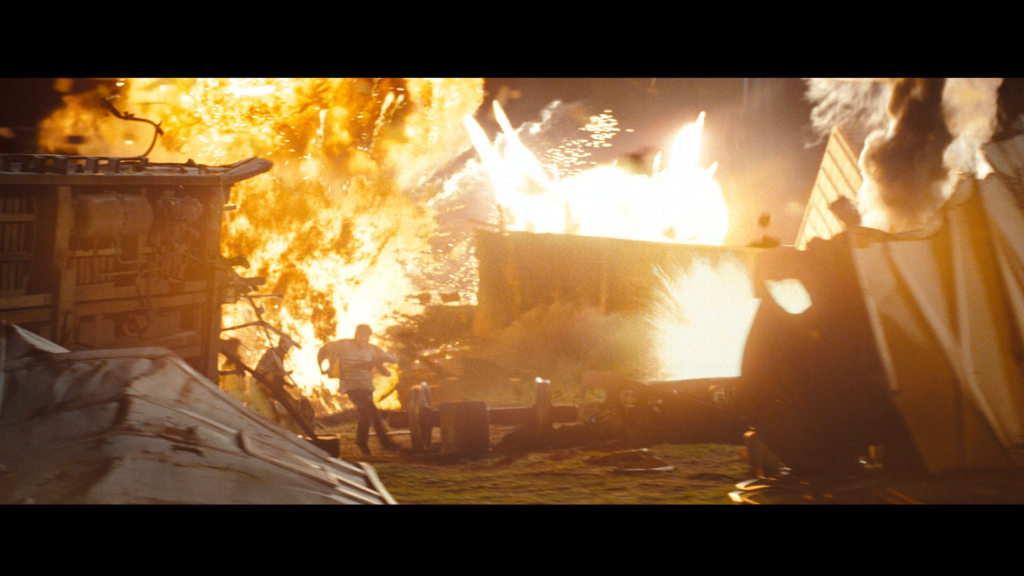 What better way to compliment a quality picture than with an equally impressive audio track! Seriously, Super 8 is an utter champion when it comes to it’s Dolby TrueHD 7.1 track; it’s incredibly full and deep, with exceptional clarity in both ends of the audio spectrum. Turbulent train crashes boom like thunder, and contains zero elements of muddled bass or overdone squelching. High-pitched glass shattering is piercing, and twisting metal frames groan with brilliance. On the other end of the scale, we have subtle ambience across the film that breathes cinematic life into even the calmest of scenes. Dialogue is mixed well into the track, and has excellent clarity. From a surround-sound standpoint, we have truly a masterful mix. I felt the positioning on particular sounds like footsteps were lifelike, and emulated a theatrical presence in the living room. I can say with sincerity that this one of the best home-release soundtracks I’ve ever heard, and I also want to say that Michael Giacchino’s score does an excellent job of throwing back to some of the classic John Williams scores that Spielberg was known for including in his pictures. There’s just the right amount of balance between theatrical epic melodies and more modern music composition to create the perfect blend for a film such as this. 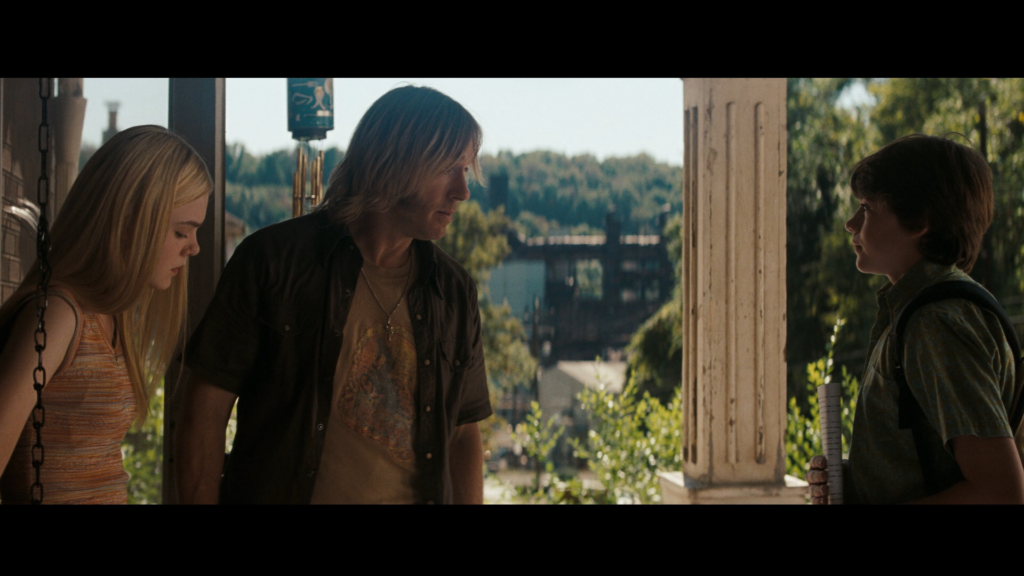 This release of Super 8 is fairly plain, with traditional Blu-ray casing and covers that emphasis those involved with the film, and its critical praise. This film screams ‘Hollywood,’ and though I’ve come to find all the extra stamping to be a bit useless, it’s not bad. I did appreciate the yellow coloring around the art, specifically at the back and on the spine.  It creates a bit of a retro feel, and is a nod towards the Super 8 film that the movie features.If you were lucky enough to score a first-run copy, the Blu-ray slipcover also features this yellow in a minimalistic look. A DVD copy of the film is included in this release, as well as a redemption code for a digital copy. 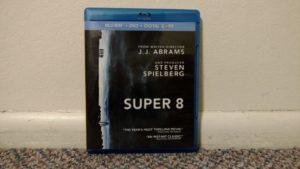 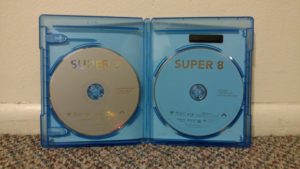 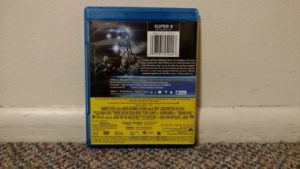 In terms of special features, there’s actually a solid selection to choose from:

–Deconstructing the Train Crash: Interactive experience that displays the special effects process in terms of pre, during, and post-production. Contains interviews, storyboards, and more along those lines.

–The Dream Behind Super 8: Featurette on the cinematography of the film, Spielberg’s influence, Abrams’ childhood and comparisons to the film, and to an extent the development of the film.

–The Search For New Faces: Featurette on the child actors in the film and the nationwide search.

–Meet Joel Courtney: Featurette on the film’s lead actor, giving a brief life story and his experiences on set of the film.

–Rediscovering Steel Town: Featurette on Weirton, West Virginia where the film was shot.

–The Visitor Lives: Featurette on the film’s alien creature, and his associated concepts and development.

–Do You Believe In Magic?: Featurette on the film’s cinematographer, Larry Fong.

–The 8mm Revolution: Featurette on the influence of 8mm filmmaking on modern-day filmmakers, and how it’s important to the film.

In addition to these featurettes, there are 14 deleted scenes included, in full HD. Compared to a lot of the standard Blu-Ray releases for summer blockbusters, there is a surprisingly decent amount of bonus content in Super 8. 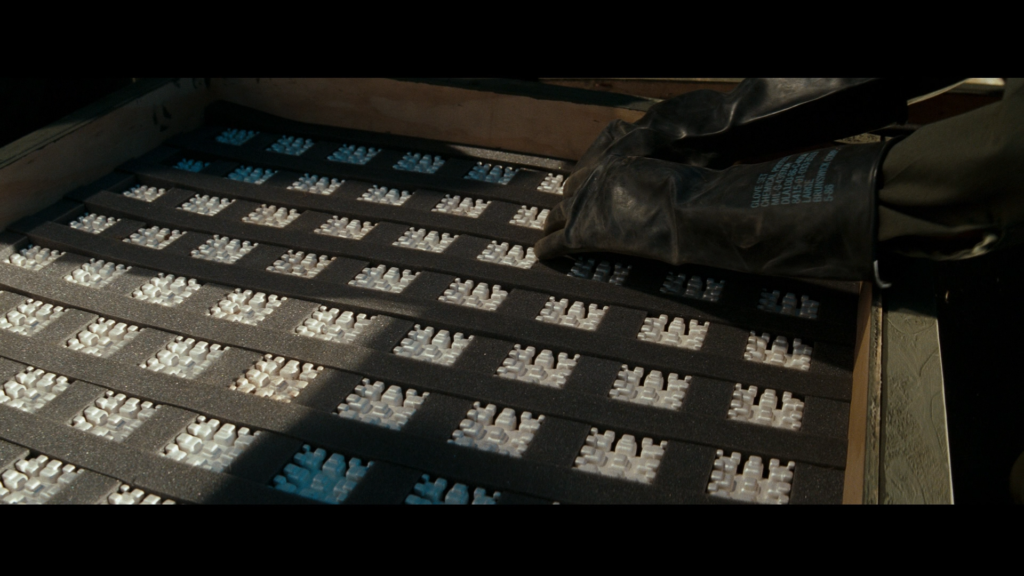 If someone asked me to name a reference-quality Blu-ray to test out a home theater system off the top of my head, I’d have to suggest Super 8 (especially at its current price-point). From a technical standpoint, it’s an incredibly well-produced film, and will be a audio/visual treat to anyone giving it a watch. For Spielberg fans, this movie is a no-brainer; you’re almost guaranteed to love it. And for science fiction and drama fans, there’s plenty of quality storytelling (albeit a tad predictable) and overall style and charm to keep you engaged for the entire feature. As one of my favorite films to be released in recent years, you won’t hear any complaints from me regarding this release.