Anyone who has followed my writing for the past year knows that I was a staunch supporter of Batman V. Superman, where I wrote a fairly positive review for a movie that was otherwise completely panned by critics and audiences worldwide. I had a lot of faith in DC to create a universe like Marvel has, and I thought that Suicide Squad would be a great jumping-off point, introducing new characters and a darkly twisted colorful experience. Jared Leto was going to be a great Joker based on his creepy shots from the trailers, and Margot Robbie looked like a complete natural as Harley Quinn. Throw in a small dosage of Batman, Viola Davis as Amanda Waller, and Will Smith, and it had all the workings of a great action-comedy. I kept thinking that Suicide Squad could be DC’s Guardians of the Galaxy, and those were the expectations I had set for it when it released. Boy, was I wrong. 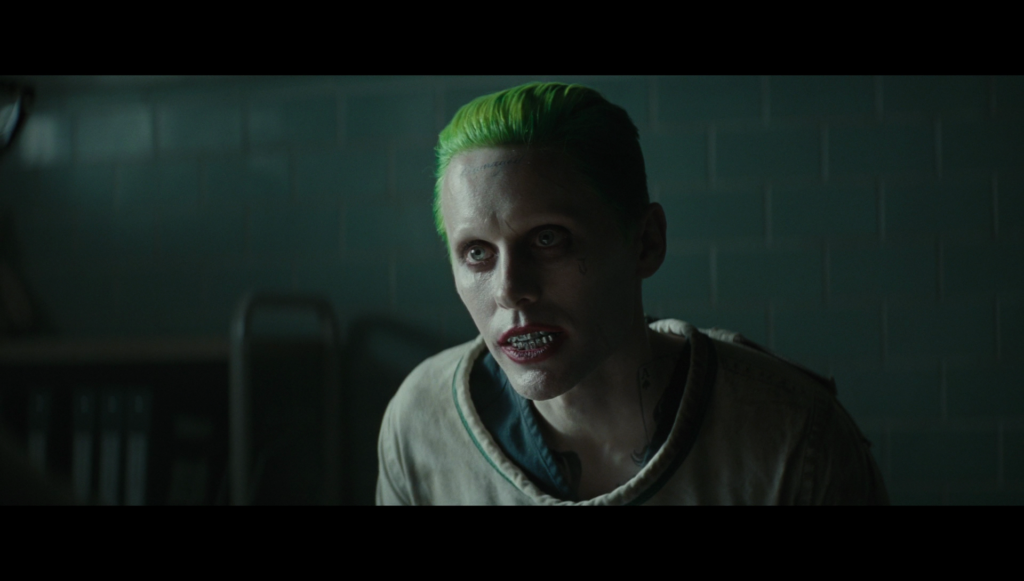 There are many stories out there about David Ayer’s experience making this movie, and his clashes with studio executives over the tone, the story, and the look and feel of the movie. I do like Ayer as a director, and enjoyed Fury very much, so I had complete faith in his ability to create the dark and twisted landscape that Suicide Squad so desperately needed. I wanted a despicable Joker, a maniacal Harley Quinn, and a no-holds-barred version of Deadshot and Amanda Waller, but instead, I got a neutered version of what could have been. After the general displeasure many critics and audiences expressed about the dark tone of Batman V. Superman, the studio allegedly took Suicide Squad and completely watered it down, removing the darker tone that it originally had, and inserting more comic relief and a lighter tone to the film. It ruined the film for me, and the tease of the Joker was a complete waste of time, as Jared Leto was not great, and he was only present for maybe 10 minutes of the runtime. The Extended Version, included with the Blu-ray release, was supposed to show more of Ayer;s original direction, but it really did not add much to the story and was also a disappointment, especially since the Director’s Cut of Batman V. Superman was a marked improvement. 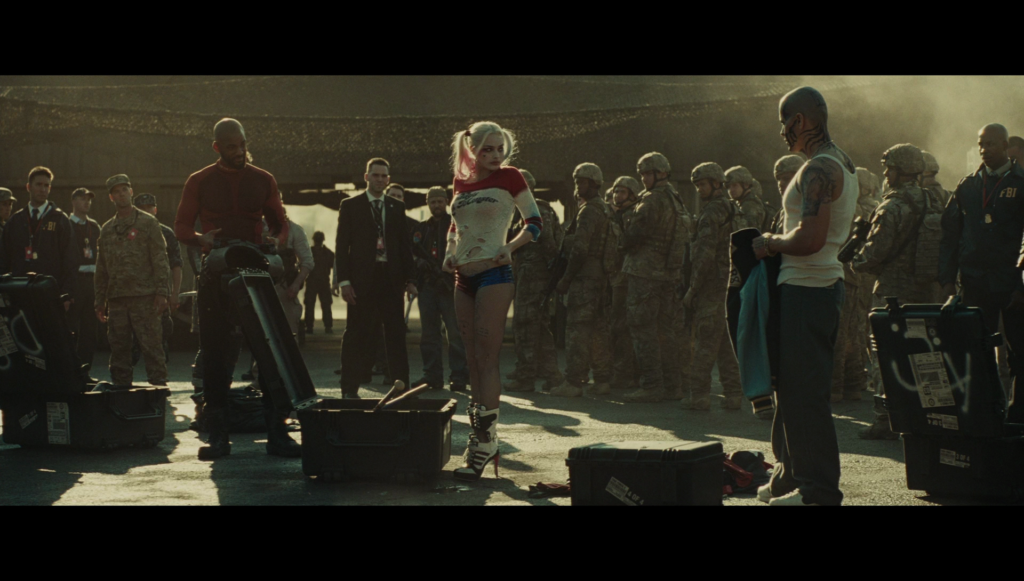 DC really needs to get its act together, but as a super fan of Batman, I do hold out hope. I know Ben Affleck can play the character, as I think he is actually an all-around better Batman/Bruce Wayne than any we have seen before, and with his expertise as a director, I do think the standalone Batman film will be excellent. The Justice League movie also has promise, as does Wonder Woman, but I am just afraid that Warner Brothers will ruin it by inserting their ivory tower business beliefs into the world of comic book movies, where fans need to be impressed in order to turn a profit. There is a reason Marvel Studios has hit on almost every one of their movies, and it is because they allow characters to develop freely under the watchful eye of directors like Jon Favreau, James Gunn, and Kenneth Branagh. DC Studios needs to do the same, and give these talented directors more freedom to create the universe and develop these characters. Suicide Squad was a huge disappointment, but I do hold out hope for the future.

Suicide Squad is an extremely dark movie, and where it tried to be lighter in tone than previous DC installments, the visuals are still a mix of grays and blacks. It rains for nearly the entire movie, and thus, it is not a very fun movie to look at. Where something like Marvel’s Guardian of the Galaxy took a rag-tag group of anti-heroes and turned their story into a colorful, rainbow-filled experience on screen, DC has dulled Suicide Squad down to an entirely too depressing visual canvas. The moments I was expecting, like the colorful scenes from the trailer, were not on full display. I expected tons of color considering the costumes of Harley Quinn, The Joker and his purple lamborghini, and the swirls of magic coming from the Enchantress, and yet for most of the film it is just too dark. The Blu-ray transfer handles the darker visuals okay, but the experience just isn’t that great. That being said, it is still a nice transfer, with no issues, but it simply isn’t a great movie to show off your new display. I will be interested to see how our 4K review talks about the HDR and if the additional color adds anything to the experience, but the Blu-ray is a pretty dull, almost boring visual experience.

I did also have a chance to take a look at the 3D video, and although it does add some nice depth and makes the film a bit more entertaining, it does get extremely dark. 3D has that effect on any Blu-ray transfer, but Suicide Squad was already so dark that the 3D was actually hard to make out, especially in rainy, outdoor scenes. I personally did not enjoy the 3D experience, as I just think it is much too dark, but for fans of the format, the transfer is well done and if you can deal with the muddied color in a few scenes, it can be a fun experience.

Featuring a strong Dolby Atmos track, Suicide Squad sounded amazing on my newly upgraded home theater. I recently added two Prime Elevation speakers from SVS to create a 5.1.2 system capable of handling the Dolby Atmos audio technology. This review was actually my first experience with the Dolby Atmos technology in my own personal home theater, and it was a treat. The height affects were especially great in the action scenes, where gunshots would literally ring overhead. Of course, Suicide Squad features an outstanding soundtrack, one which went platinum in the United States by selling over 1 million copies. The music roared through my speakers and meshed well with the action, serving as the backbone to an overall well-balanced audio mix. 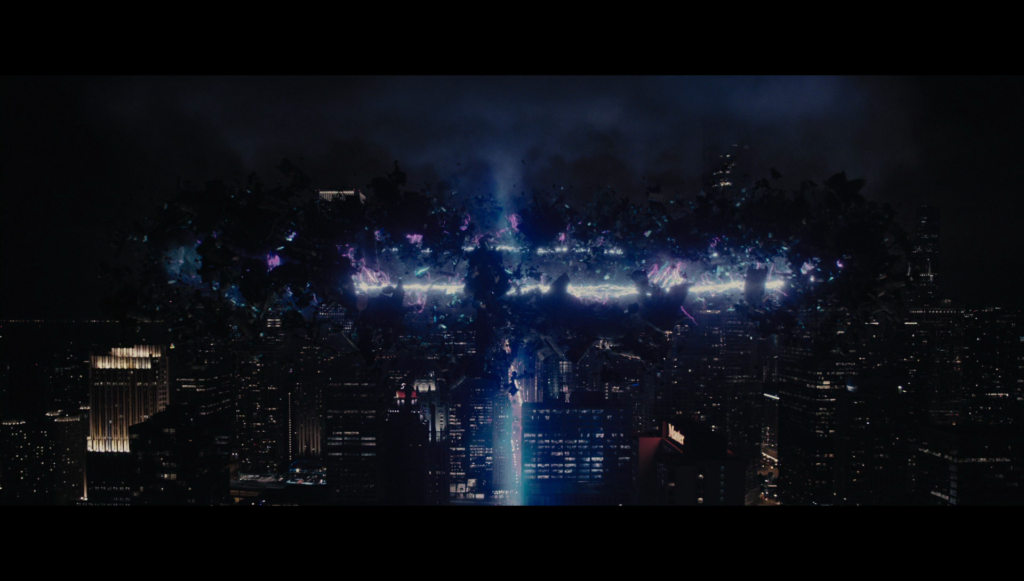 Dialogue was strong, even at the film’s loudest moments, and the two Atmos Elevation speakers helped to spread the soundstage and allowed my center speaker to shine on its own. Suicide Squad is a reference quality audio experience, and regardless of the merits of the film, the home theater experience is worth it.

My 3D copy of Suicide Squad comes packaged in a typical 3D Blu-ray combo pack, with a Blu-ray copy featuring the extended and theatrical versions of the film, and the 3D version, which features only the theatrical version of the film. There is a digital copy included which can be redeemed on any UV service, and there is a slipcover with the initial print run. There are a few other options, including a 4K steelbook and a copy of the film complete with a graphic novel, and I would recommend those over the standard issue packaging. 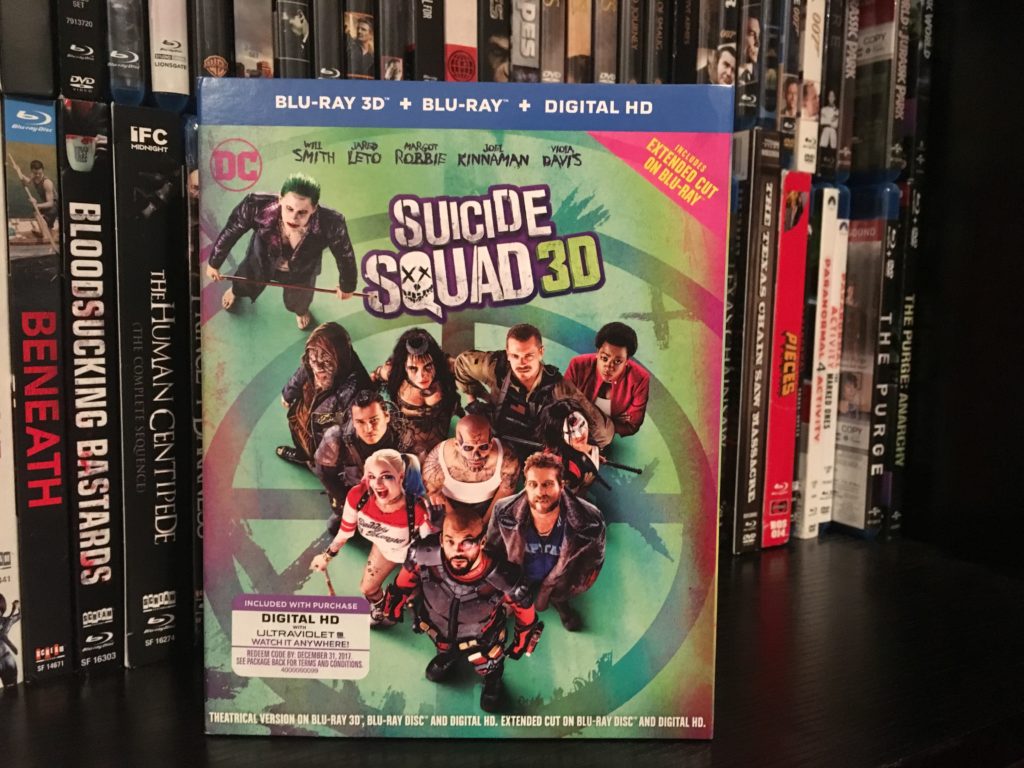 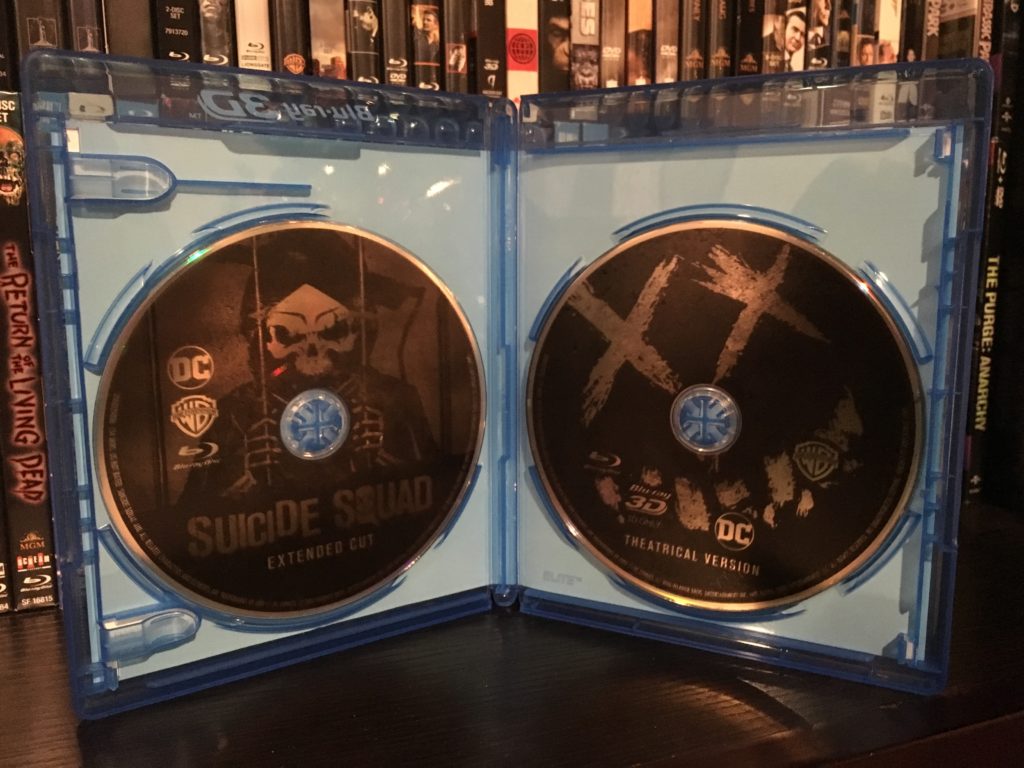 As for special features, there are a few featurettes and short interview packages, but nothing really to speak of that was worth my time. The extended edition could be considered a special feature, but it didn’t add much other than a few extra scenes. The features are as follows: 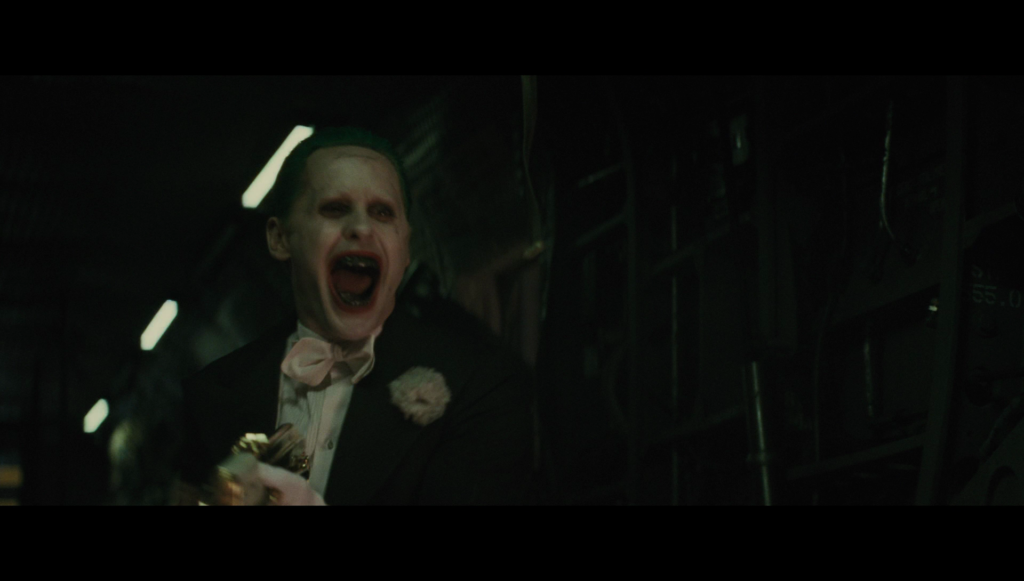 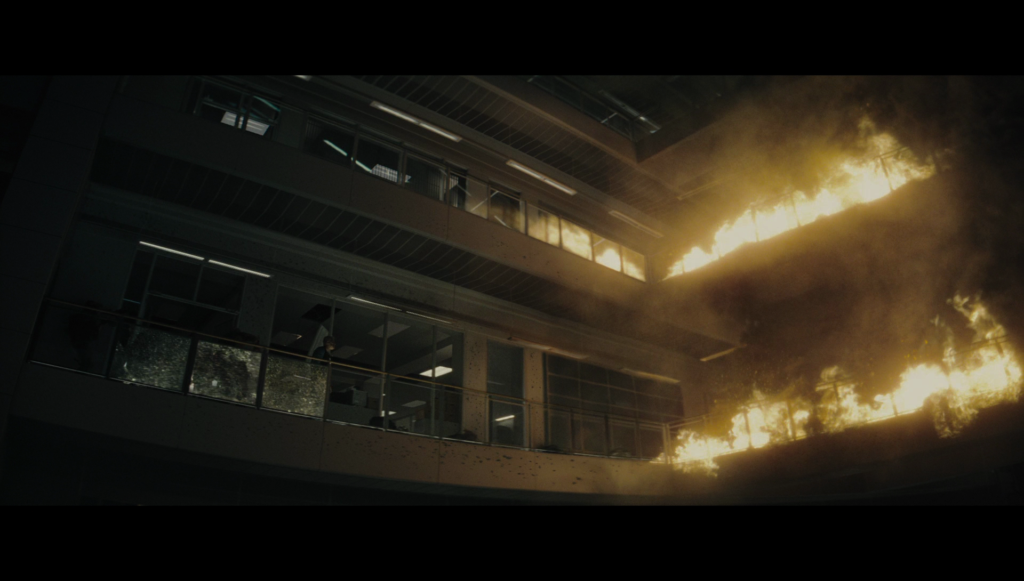 While the technical merits are strong, especially the audio, the movie itself just is not that great. DC has a lot of work to do over the next couple of years to keep pace with Marvel, and hopefully the executives at Warner Brothers learned something from this experience, and give the filmmaker more flexibility to make the movie they want to make, not the Hot Topic commercial that they ended up selling to moviegoers. I would recommend going with some sort of special edition packaging if you want to pick this one up on release day; otherwise, I would wait for a price drop. If you must have the 3D version, I would recommend it, but it is an extremely dark movie which 3D unfortunately only makes darker. Final verdict: wait for a sale. If you haven’t seen this one yet, you truly are not missing much. When this hits $10, it would be a good buy.