Suffragette starts off slow, really slow. So slow, that I almost lost interest during the first act of the film. Don’t let that put you off though, because once it gets going, it REALLY gets going. In fact, once the film starts building momentum, it becomes one of the most engaging and important stories of 2015. 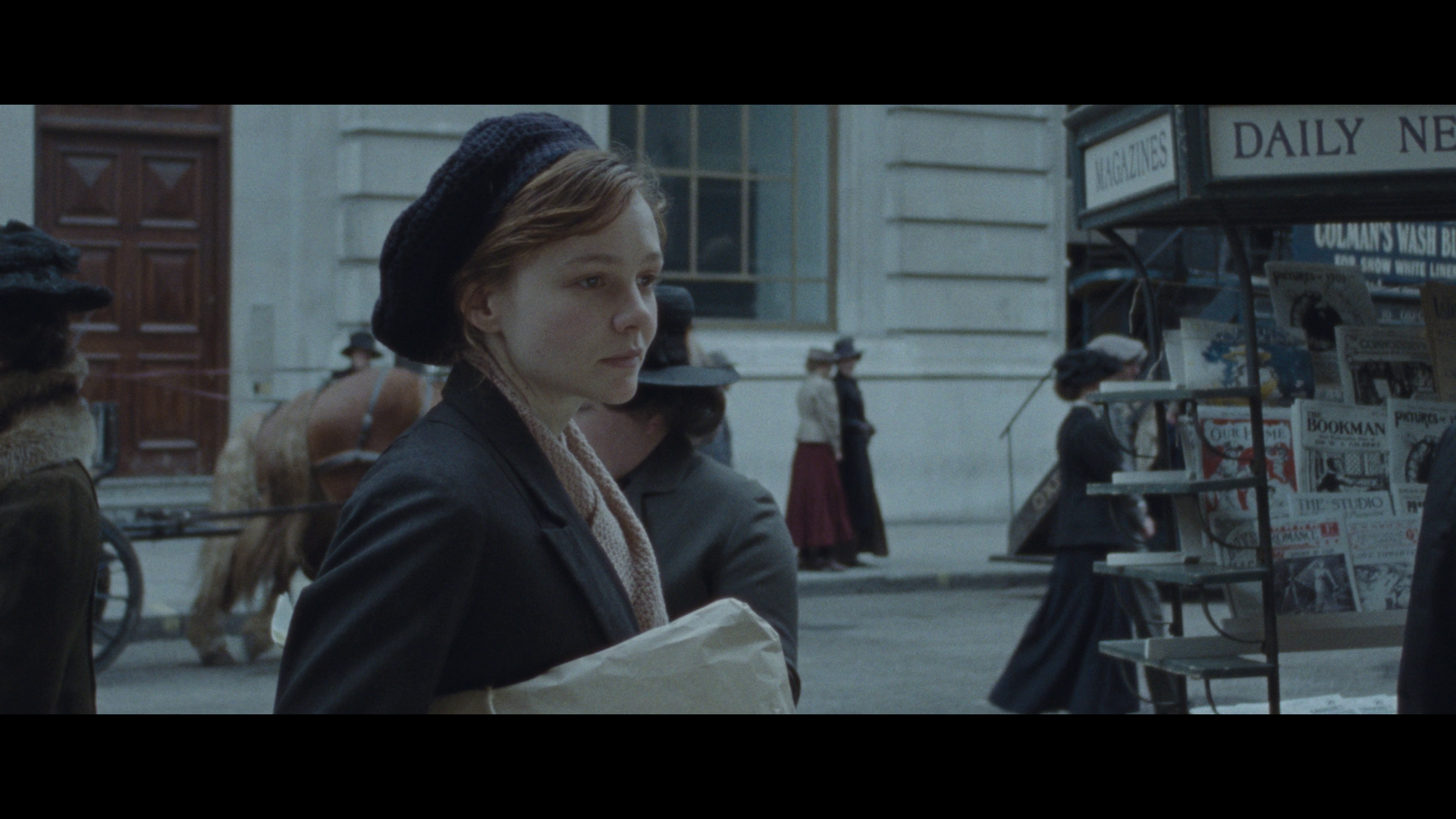 Suffragette tells the story of Maud Watts, played by Carey Mulligan, a woman who has slaved her entire life away in a industrial laundry factory. She spends her days dropping off her son, going to work, and then coming home to her husband, played by Ben Whishaw. The Watts family is strained, scraping by on minimal wages, earned under cruel work conditions by the members of the household. One day, while delivering a package after hours for her job at the laundry, Maude is swept up into the world of the women’s suffragette movement of 1910’s England working towards the right to vote, as she accidentally ends up in the middle of an intense act of violent civil disobedience. Suddenly, her eyes are opened, and the world of the suffragettes slowly starts creeping into and later destroying her life, first at work, and then at her local pharmacist’s. Suddenly, Maud is knee deep in the movement, and it slowly pushes away anything else in her life, consuming everything she is. 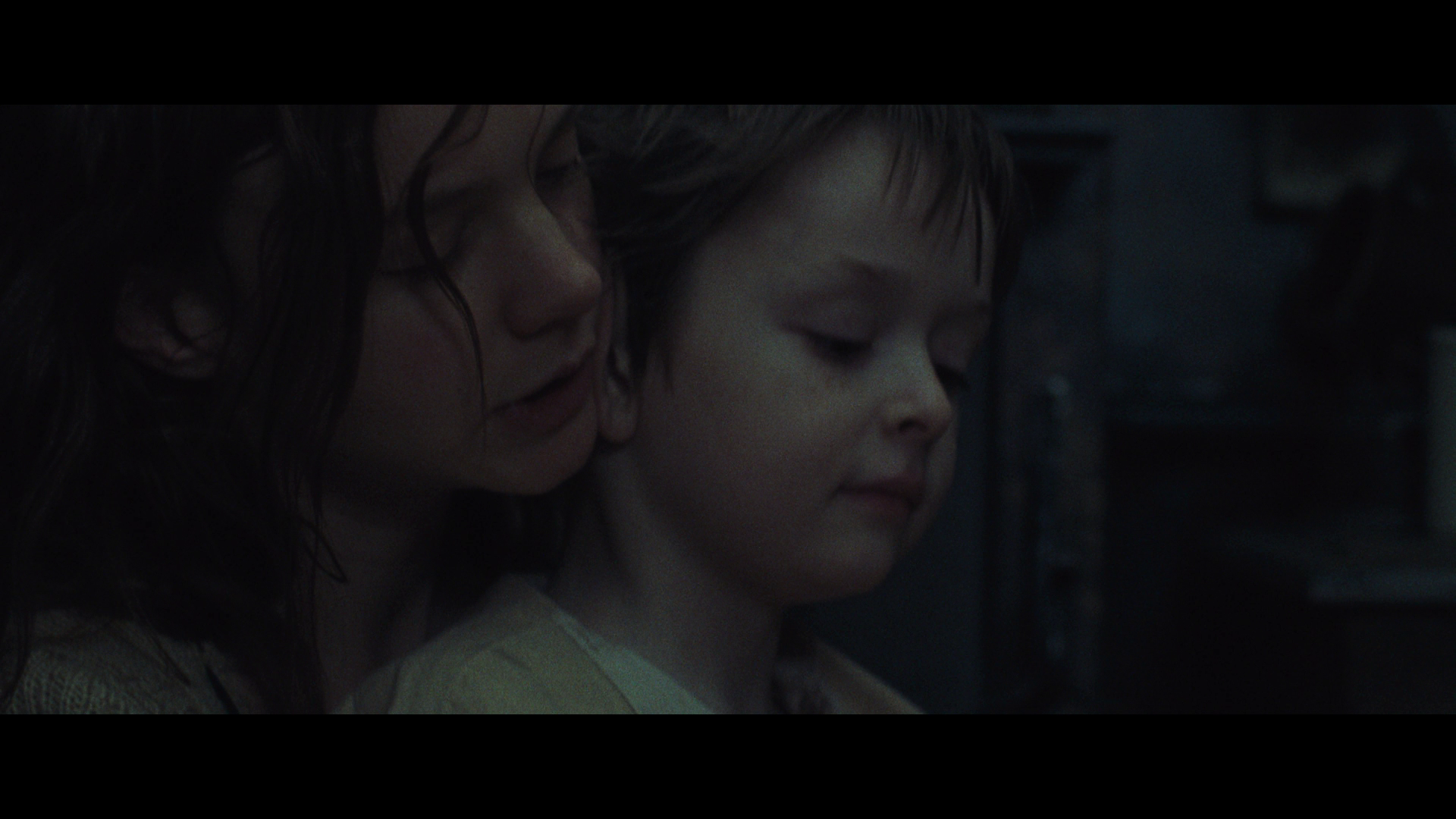 Along the way, she is joined by a colorful cast of characters, such as Edith Ellyn, a pharmacist’s wife and pseudo-leader of the movement in London, played enthusiastically by Helena Bonham Carter, and Violet Miller, Maud’s closest friend, both at work and in her suffragette participation. She’s played by Anne-Marie Duff, an actress better known for her television work in Great Britain, and plays the role with intensity, as well as a convincing amount of frailty. Brendan Gleeson, best known for his role as Mad Eye Moody in the Harry Potter films, takes a brilliant and sympathetic turn as the lead policeman in charge of investigating and hunting down the suffragettes as they wreak their havoc, and a quick appearance by Meryl Streep, no more than a glorified cameo really. In standard Meryl Streep fashion, she steals the show in her single appearance, and things really take off once she’s made her mark on the film. 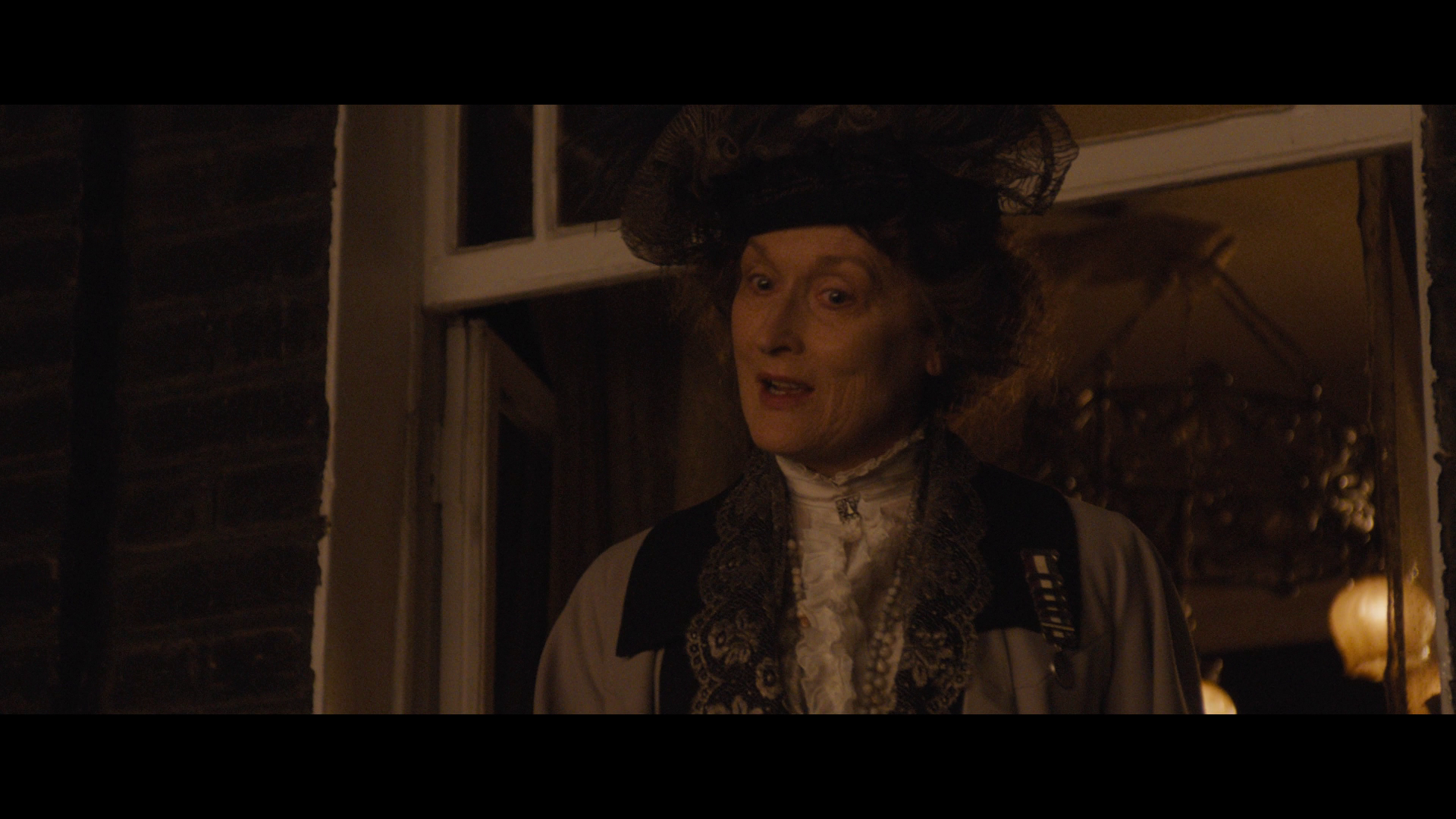 The film starts off slow, as I mentioned, and moves through establishing our cast of characters in an agonizing manner. Once the film focuses less on introductions, and finally shifts into gear about forty minutes in or so, its true colors shine, and shine brilliantly. We get to see the women of the movement show their strength, taking on prison sentences, terrorist acts, and organizing massive gatherings to help make their voices heard. The film carries a tone of intensity, but also of desperation, which permeates through each scene. 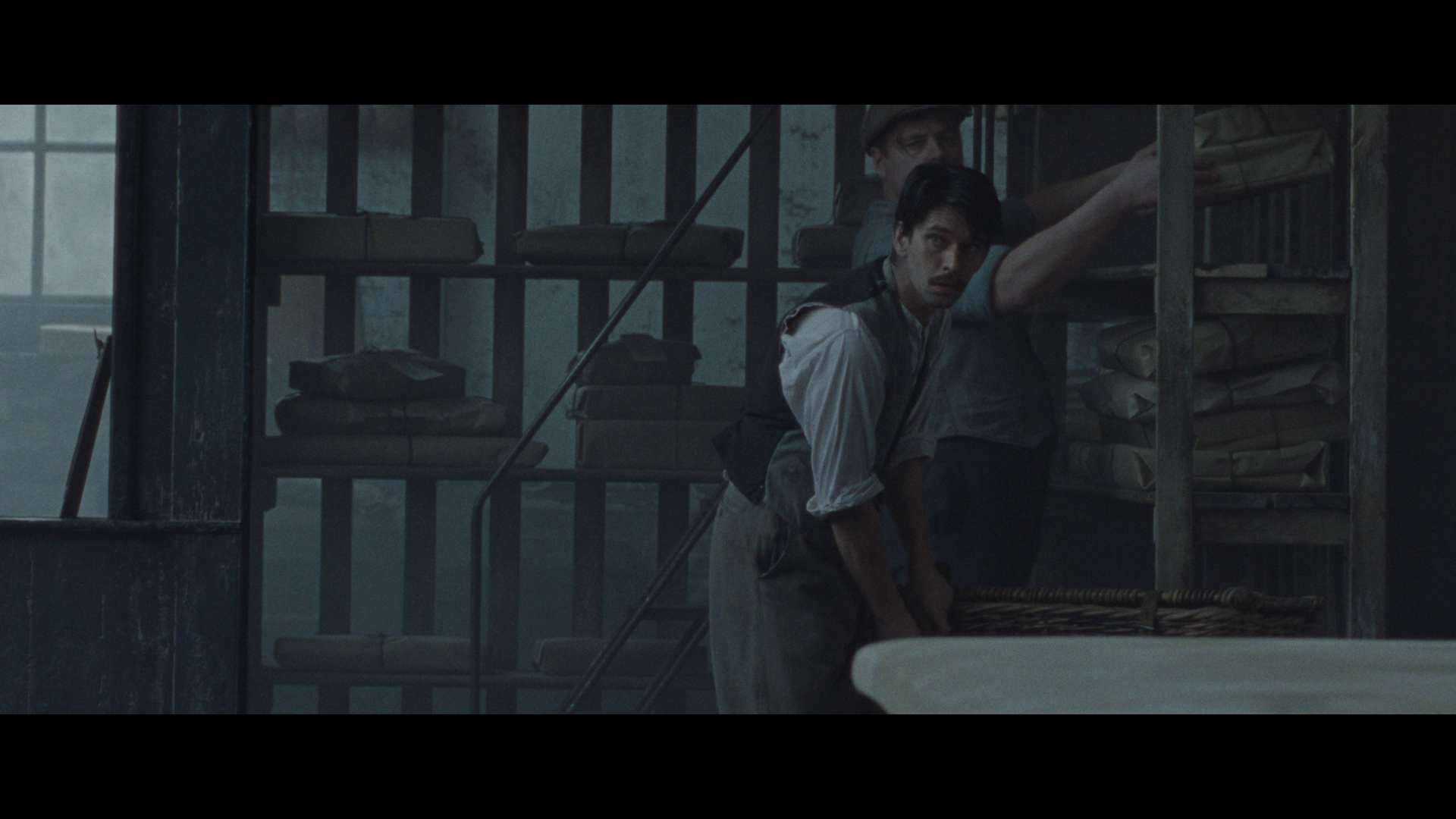 Suffragette tells an amazing story, and does a rather convincing job of recreating 1910’s London, using a combination of great special effects, and an impressive amount of period attire and period sets. The film, once it gets over its early growing pains, tells an inspiring story, full of heart and intensity. I missed Suffragette in its theatrical run, but I am mostly thrilled with my experience viewing it now on Blu Ray. 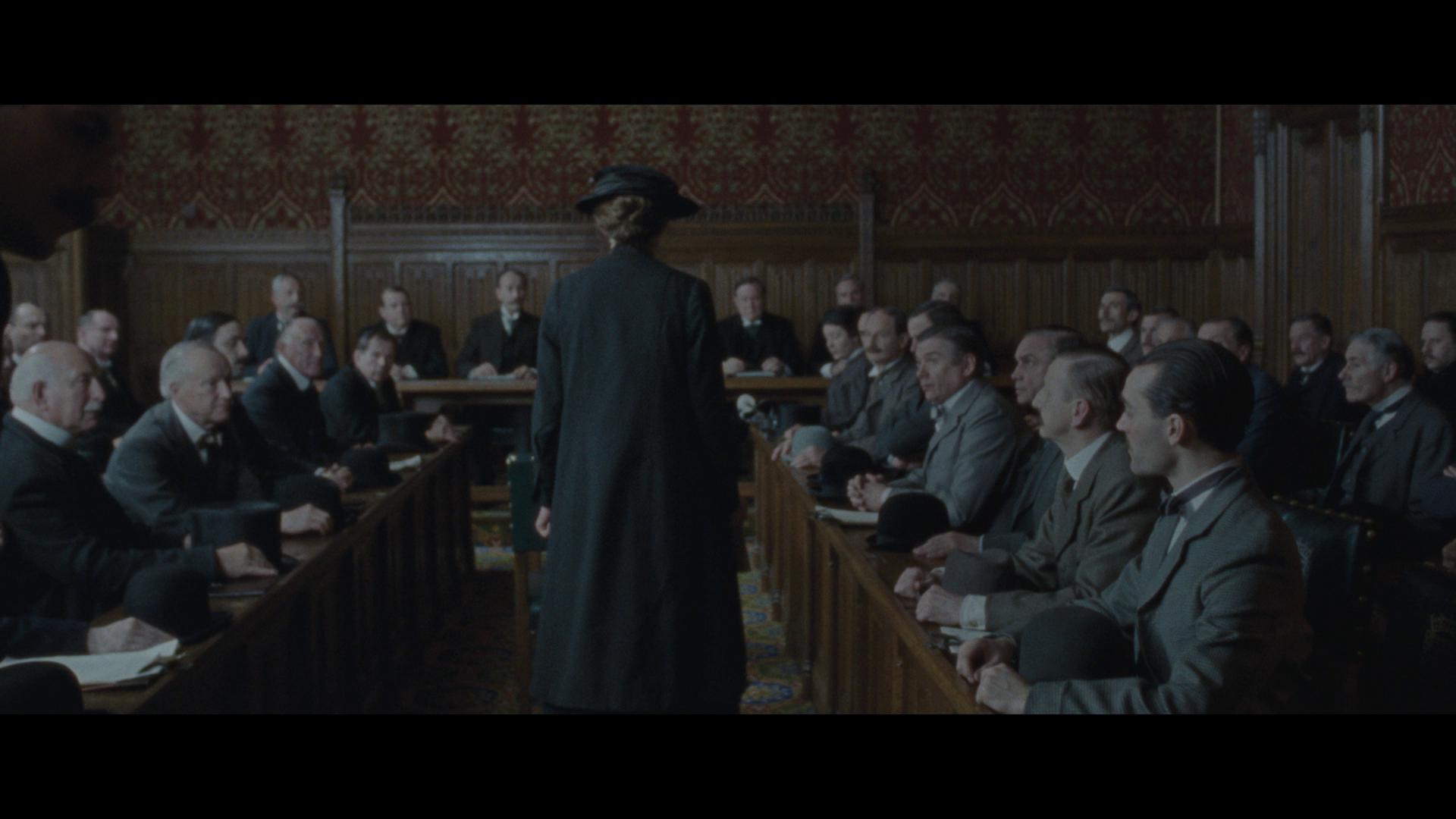 Suffragette was shot using a combination of the Super 16mm film format, and the Arri Alexa digital camera. The film’s digital intermediate was created at 2K resolution for digital projection, and is presented on Blu Ray in 1080p resolution at a letterboxed aspect ratio of 2.40:1. 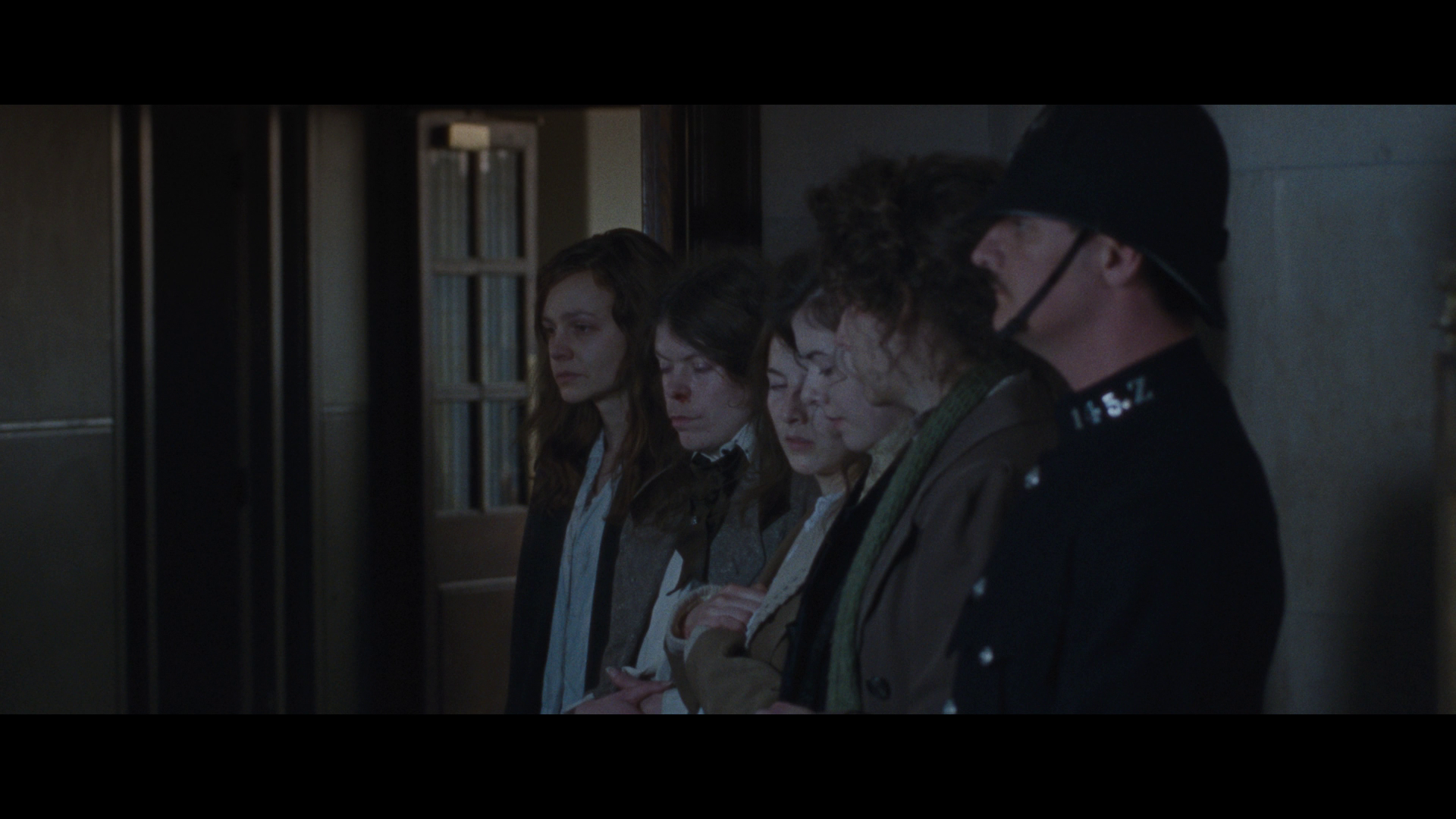 Super 16mm film stocks, and the digital methods that are used to emulate the format in post production have come a long way. Unlike Carol, or Steve Jobs, whose 16mm footage embraces a heavy layer of grain, as if to accentuate the contrast in time periods, Suffragette’s transfer, while still grainy, feels more like a cheaper 35mm production. Grain is present across the entire image, but it never feels overwhelming, or messy, as 16mm can sometimes look. 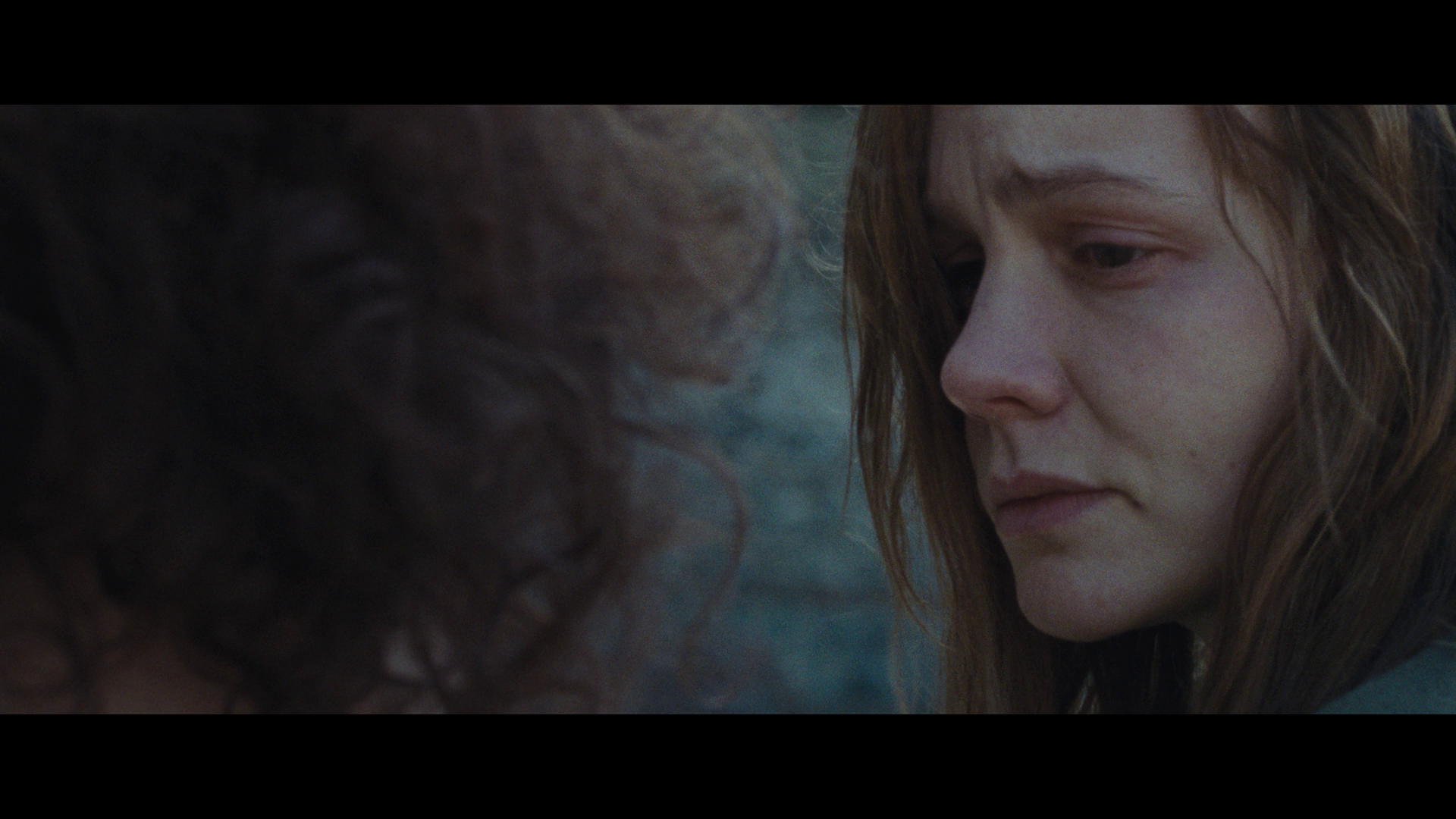 Where the 16mm footage shows its weakness however, is in overall detail, which drops off in medium and wide shots. The Blu Ray reproduces it faithfully. Close ups feature an average amount of detail, but nothing I’d consider mind blowing. All of the film’s night photography, as noted by American Cinematographer magazine, was captured digitally, and much of that footage holds up poorly, with most of the sharpness and color drowned in darkness. The film otherwise is awash in reds and golds, and is heavily pushed into the warm end of the color spectrum, almost overwhelmingly so at times. The digitally sourced master is clean, and stable. Overall, while this transfer is wonderful in that reproduces how the film is supposed to look, it doesn’t exactly scream, “incredible Blu Ray” to me.

Suffragette, presented in 5.1 DTS-Master Audio, is not exactly a force to reckoned with. However, it isn’t a lame duck either. A lot of the movie happens in close quarters, using hushed tones to portray the secrecy the suffragette movement used to carry out its method of mayhem. For those kind of scenes, the movie tends to ignore the surrounds, and stick with the front spread, with out any real sense of directionality.

However, when the film treats to large crowd scenes, racetracks, and parades of all sorts, suddenly there is life. There is one scene in particular, were the women gather in a Parliament courtyard, where the crowd is so immense and tightly packed, and when chaos breaks out, the entire sound stage goes wild. Its almost as if you’re in the courtyard with them. The subwoofer is present, although in small amounts, mostly during the second and third acts of the film, but never really feels like it carries the full weight of what you see on screen. Overall, this film’s soundtrack is merely average.

Universal’s release of Suffragette features a standard keepcase, with a glossy slipcover that mirrors the artwork of the keepcase. The front artwork features a rather dispassionate picture of 3 of the main characters in the film. It imagine its meant to make the women look strong, and it sort of works, but especially in Carey Mulligan’s case, it just makes her look cold and unpleasant. The back artwork is standard, featuring various key moments from the film, as well as information on bonus features and a little paragraph about the film itself. Nothing too crazy or awe inspriring.

As for special features, being that this is just a standard release, the included set of extras is fairly light. There are three features, and a commentary that runs the entire length of the film, performed by the director of the film, Sarah Gavron, and screenwriter Abi Morgan. 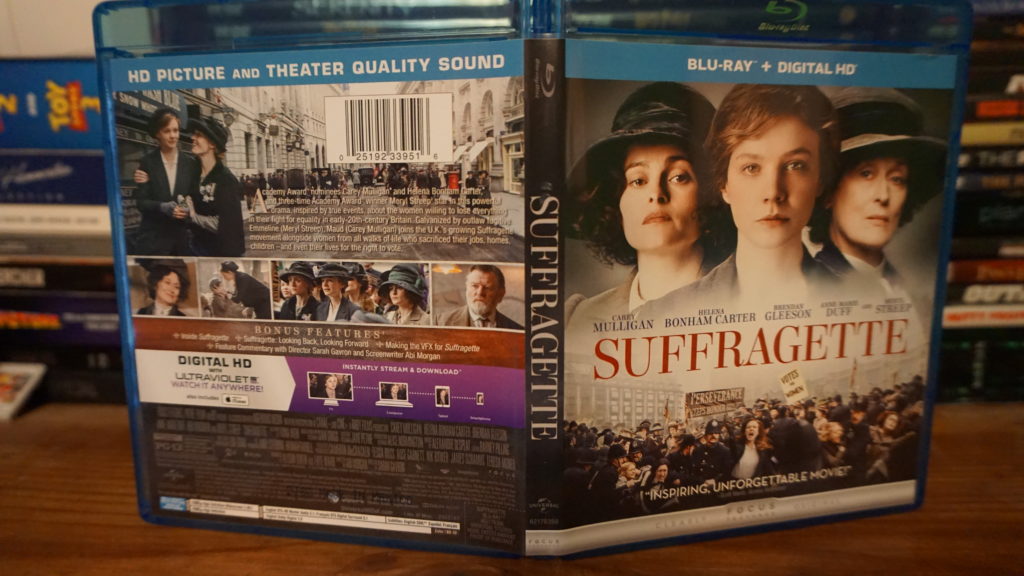 The first of three features, Inside Suffragette, is a fairly standard “making of” feature. Actors and actresses discuss their inspirations and what they enjoyed about taking on their specific roles, main production members discuss their thoughts on creating the world of Suffragette, their choices in terms of casting, and what lengths they had to go to in order to create an authentic feeling movie. It doesn’t run terribly long, but gives some good insight into the making of the film.

The second feature, titled “Suffragette: Looking Back, Looking Forward,” is much like the first feature in tone and style, but focuses more on the historical basis of the film. Production members and historians discuss the real woman that were either modified or combined to create the women depicted in the film, and specific characters in the film that actually existed, and their achievements. They wrap things up with a discussion about how the film’s ideas are still relevant today in many societies. 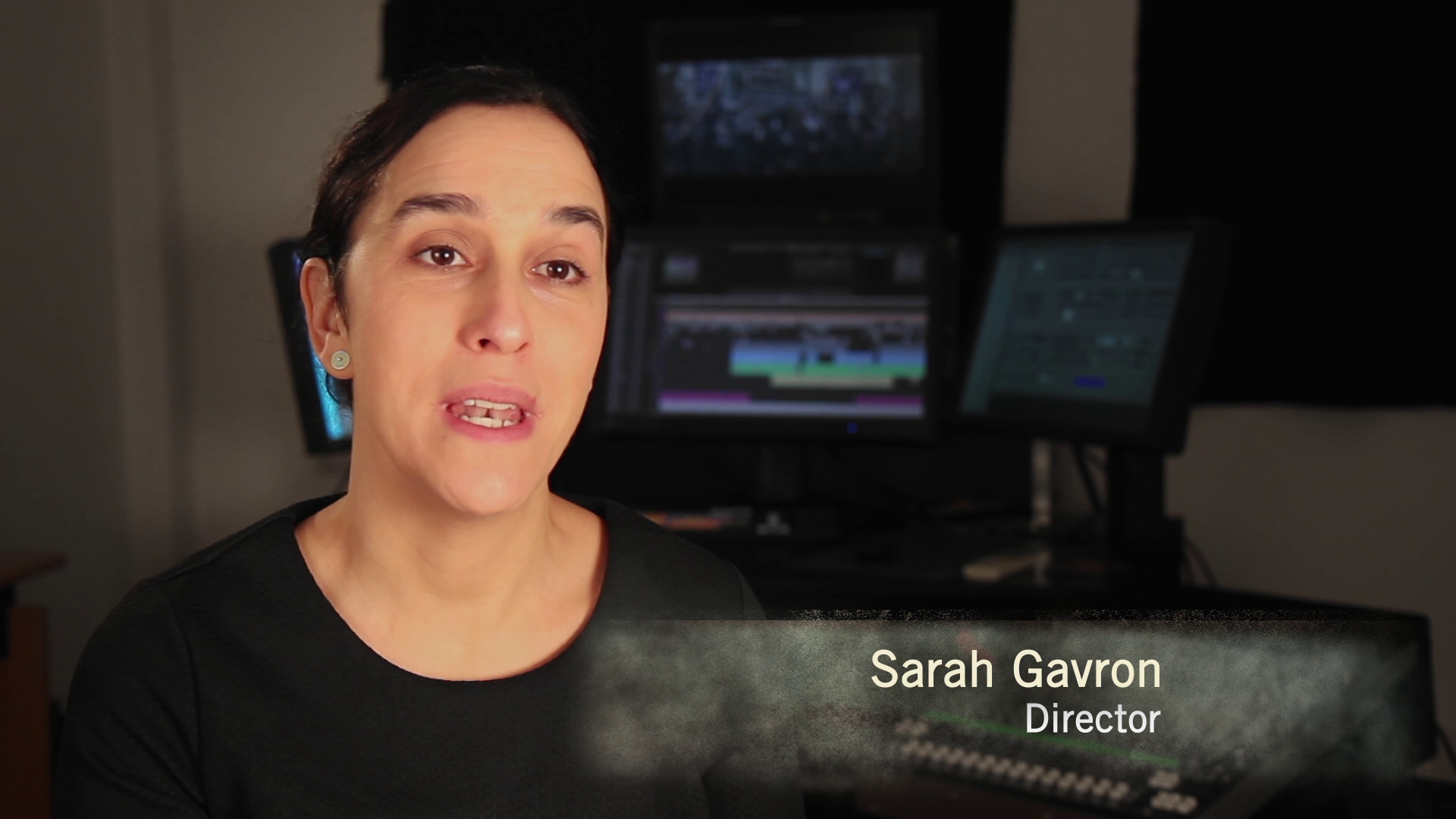 Finally, there’s a short five minute feature titled, “Making the VFX for Suffragette.” This piece, narrated by the film’s visual effects supervisor, looks at how they used digital effects to extend sets and create large crowds throughout the run time of the film. 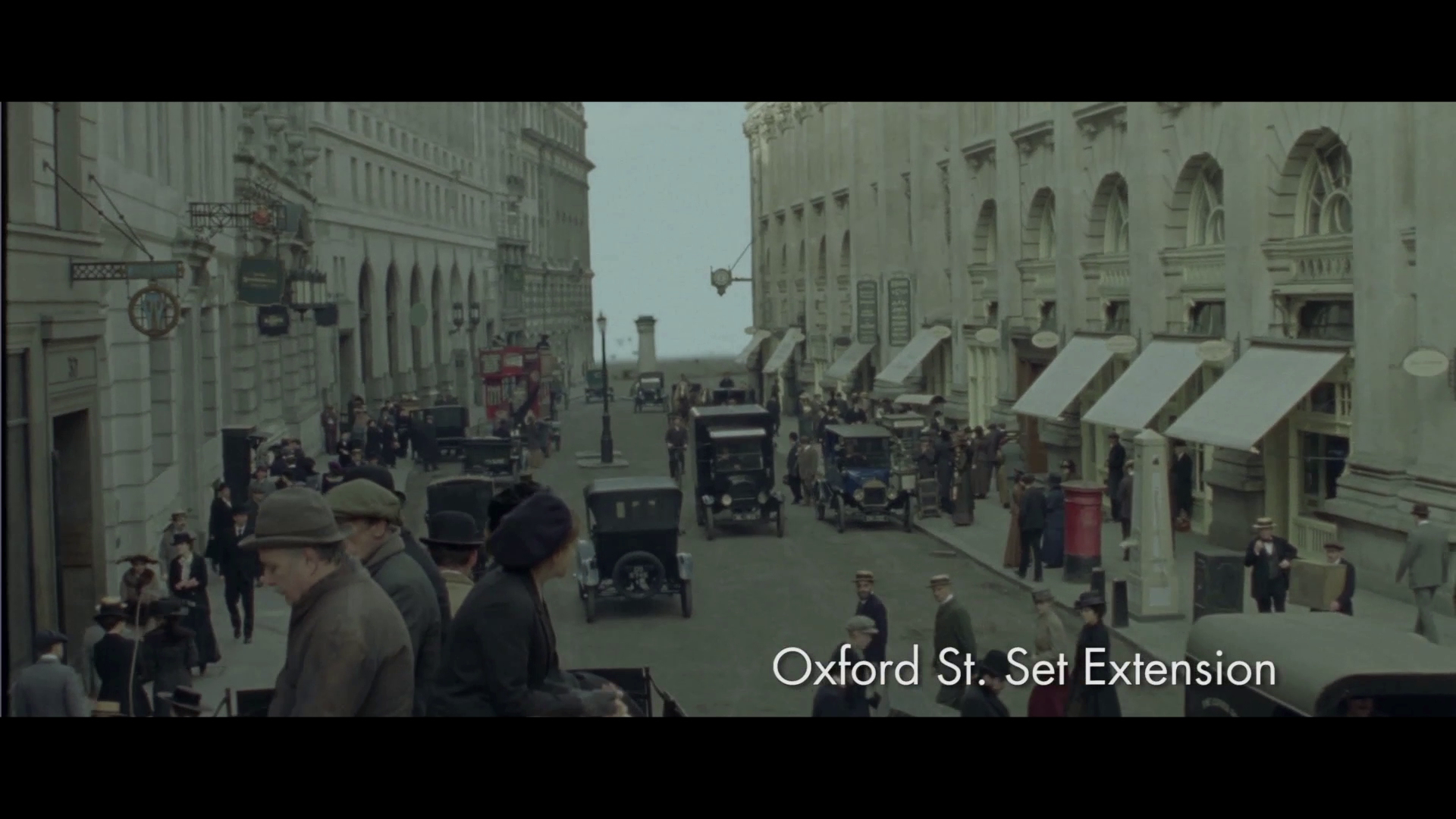 The commentary, which features a lively discussion between the two mentioned above, discusses great performances and scene-specific inspirations. Standard fare for those who enjoy film commentaries from production staff. Overall, this release’s special features and packaging are nothing I’d consider, “to die for.” 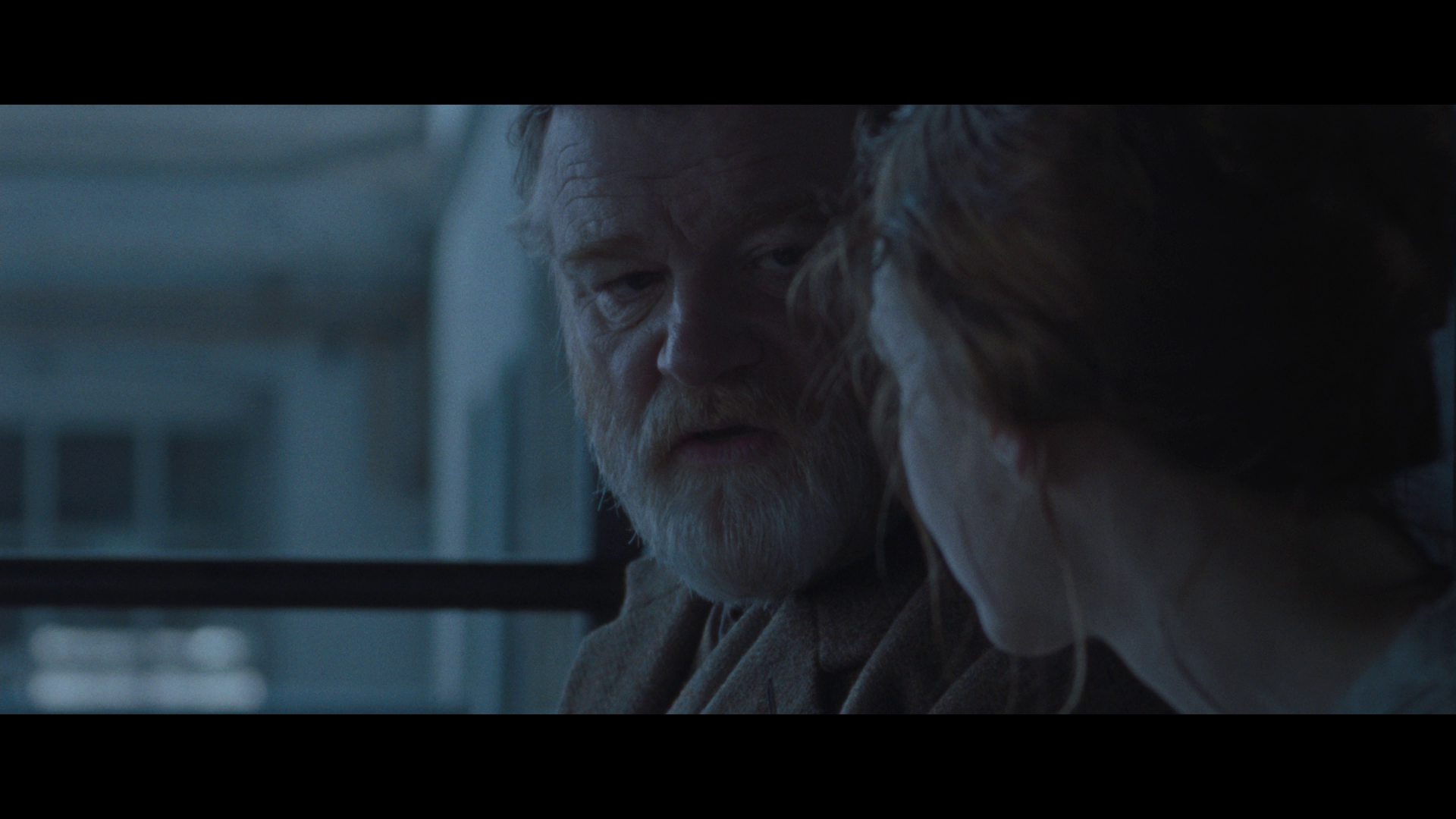 Suffragette is a solid movie, but not exactly a mind blower. There is a lot of passion and intensity to be found within its nearly two hour run time, but it takes a long time to build up to that point, and I imagine most won’t be willing to sit through the agonizingly slow first act. Performances are solid across the board, especially from Carey Mulligan, who I am learning to love more and more as a leading lady, and television actress Anna-Marie Duff, who plays the character Maggie wonderfully. However, on the audio and visual spectrum, while it does very little wrong, it does not really do anything all that impressive either, and with an underwhelming selection of bonus features and lame packaging, this release does not necessarily make for the most exciting Blu Ray purchase, especially at a price point of $24.99 at the time of writing this review.