Streets of Vengeance is a 2016, 80s-styled feministic revenge film, and is the second film from the filmmaking team of Paul Ragsdale and Angelica De Alba. Written and Directed by Ragsdale and De Alba, the film features Delawna McKinney, Anthony Iava To’omata, and the legendary adult film and B-movie icon Ginger Lynn.

Taking inspiration and ideas from films like Savage Streets, and New York Ripper, Streets of Vengeance takes a blend of 80s slasher aesthetics and mixes it with the corresponding social commentary. The film follows the former adult film star, Mila, as she is attacked by a misogynistic cult known as “The Sword”. She turns vigilante and puts together a group of bad-ass girls to seek revenge; the film tackles several issues, including misogyny, violence against women, and the entire rape culture with a satiric attitude.

Streets of Vengeance presents itself in a manner that follows similar 80s style revenge films. While keeping true to its roots, the movie perfectly mashes the aesthetics of the films it took inspiration from with the social commentary that typically accompanies these films. Loaded to the brim with neon lights, babes, and gore, this movie is the latest epitome of cheesy goodness that comes with films of this particular genre. With its extreme satirical approach, this movie is one that I personally feel should be seen by anyone who has even the slightest interest in checking it out, even if it is to see the production that was done on a $3,500 budget. 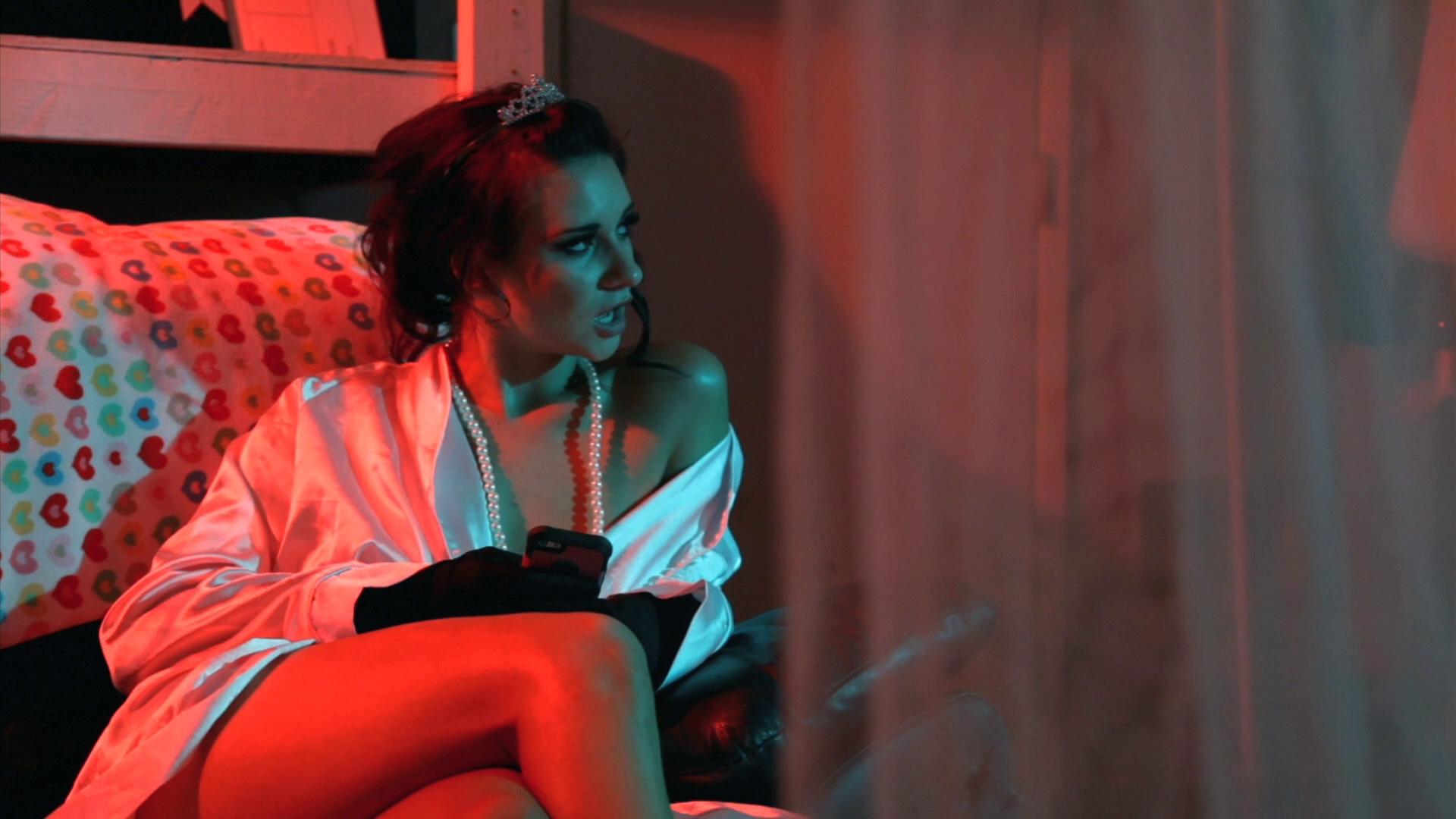 Presented in 1080p, standard high definition, Streets of Vengeance looked pretty damn good as it played out across my living room television.  Perfectly capturing the nostalgia that accompanied slasher films of the mid to late 1980s, the bright and vivid color palette that followed that of the club scene absolutely shined with this release.  The gore and effects that were used for these sequences blended into the scenes really well, allowing for them to feel as real as possible, which is the biggest surprise with this film and the budget that it had. 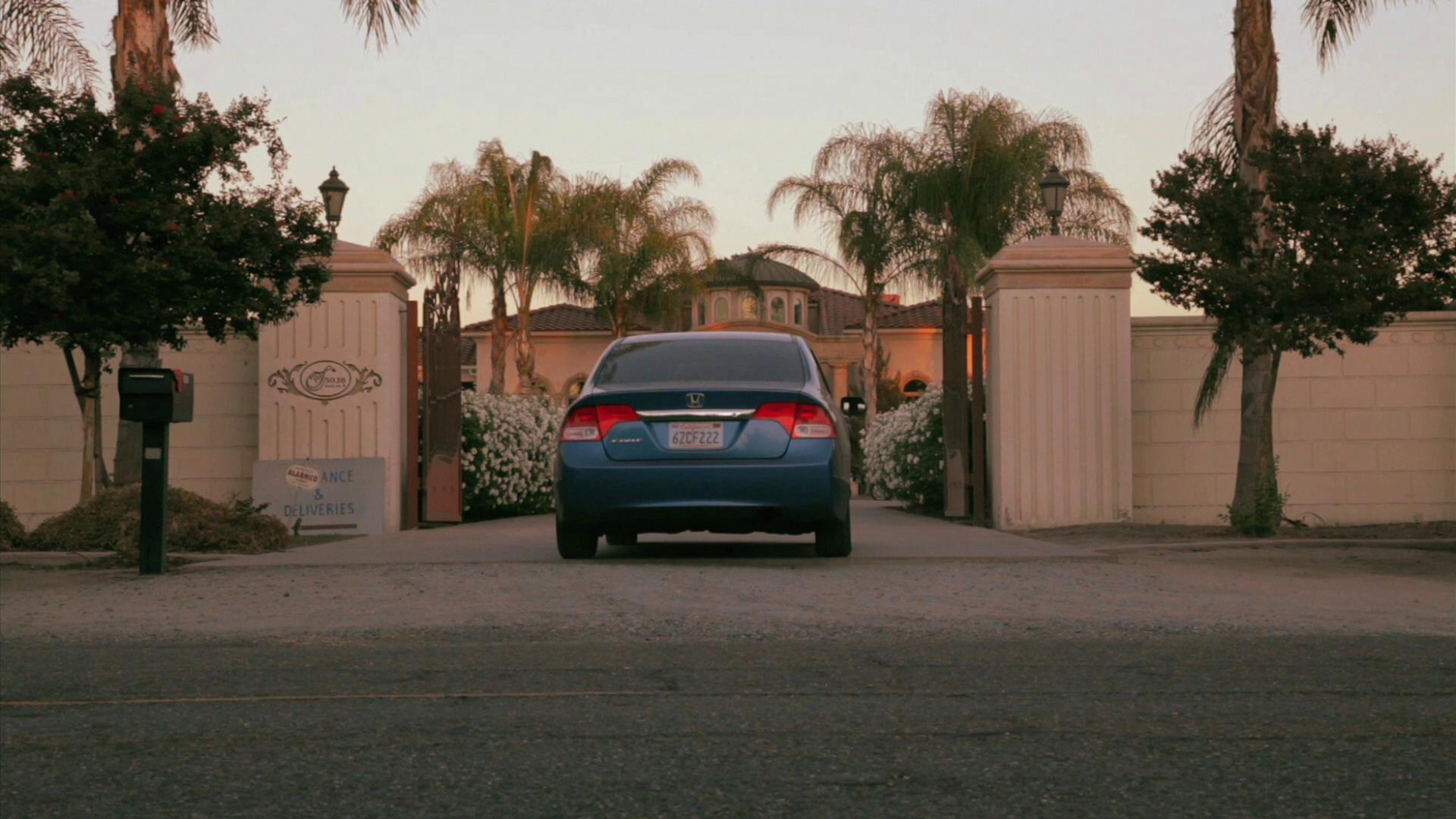 Packaged with a Dolby Digital 2.0 audio track, Streets of Vengeance doesn’t really shine at all regardless of the home theater system that’s being used.  While it is a clean track and it doesn’t have any distortion to be experienced, it ultimately lacks in power, and immersion for the audience.  The ambient elements didn’t really stand out with this release unless you tried to listen for them, and you really had to try to catch them.  Once I was able to get my volume levels adjusted to an understandable level, I was able to hear and understand what was being said without having to pay any additional thought, but they could have at least included a 5.1 mix with this release. 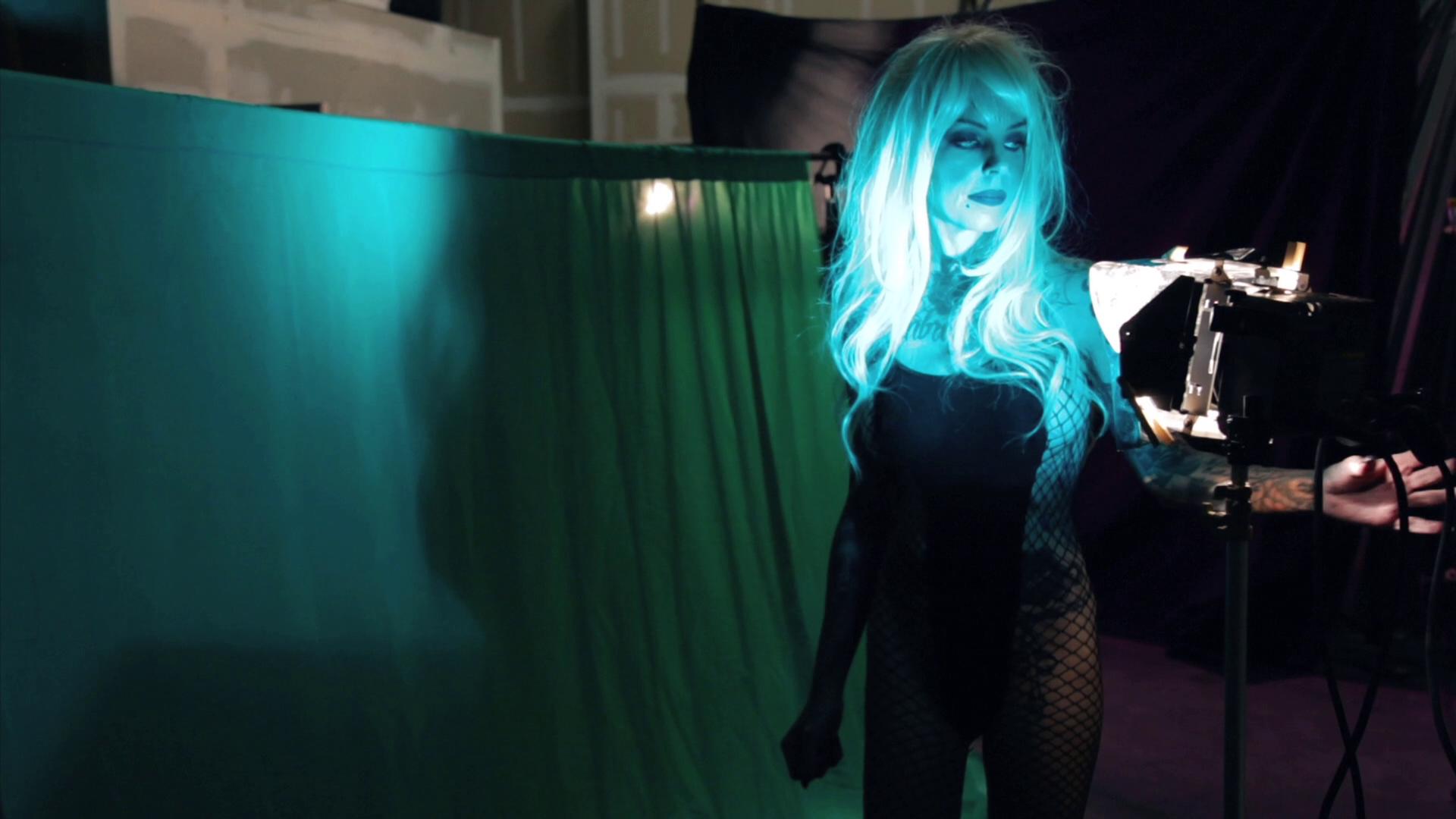 The Blu-ray release of Streets of Vengeance comes packaged in your standard single disc Blu-ray amaray case.  Within that case is the standard Blu-ray copy of the movie, the disc featuring a piece of artwork that’s related to the movie, and completely different from that of the case art.  There are no DVD copies included with this release nor are there any digital copy redemption pamphlets.  There is no slipcover provided with this release at all. 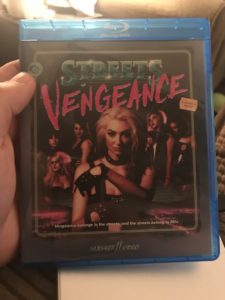 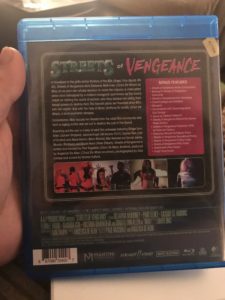 Unlike any other release from Olive Films, Streets of Vengeance comes packed full with additional content that explores not only the film, but it explores the work and promotional work that went into this movie.  The content that was included is what I would personally consider to be all inclusive, and I believe that the folks over at Olive Films should use this as a prime example of what to include in the special features of their releases.  I personally loved the “Making Of” featurette that was included as it showed some of the tricks and effort that went into working with such a small budget for this film.  Included with this release is: 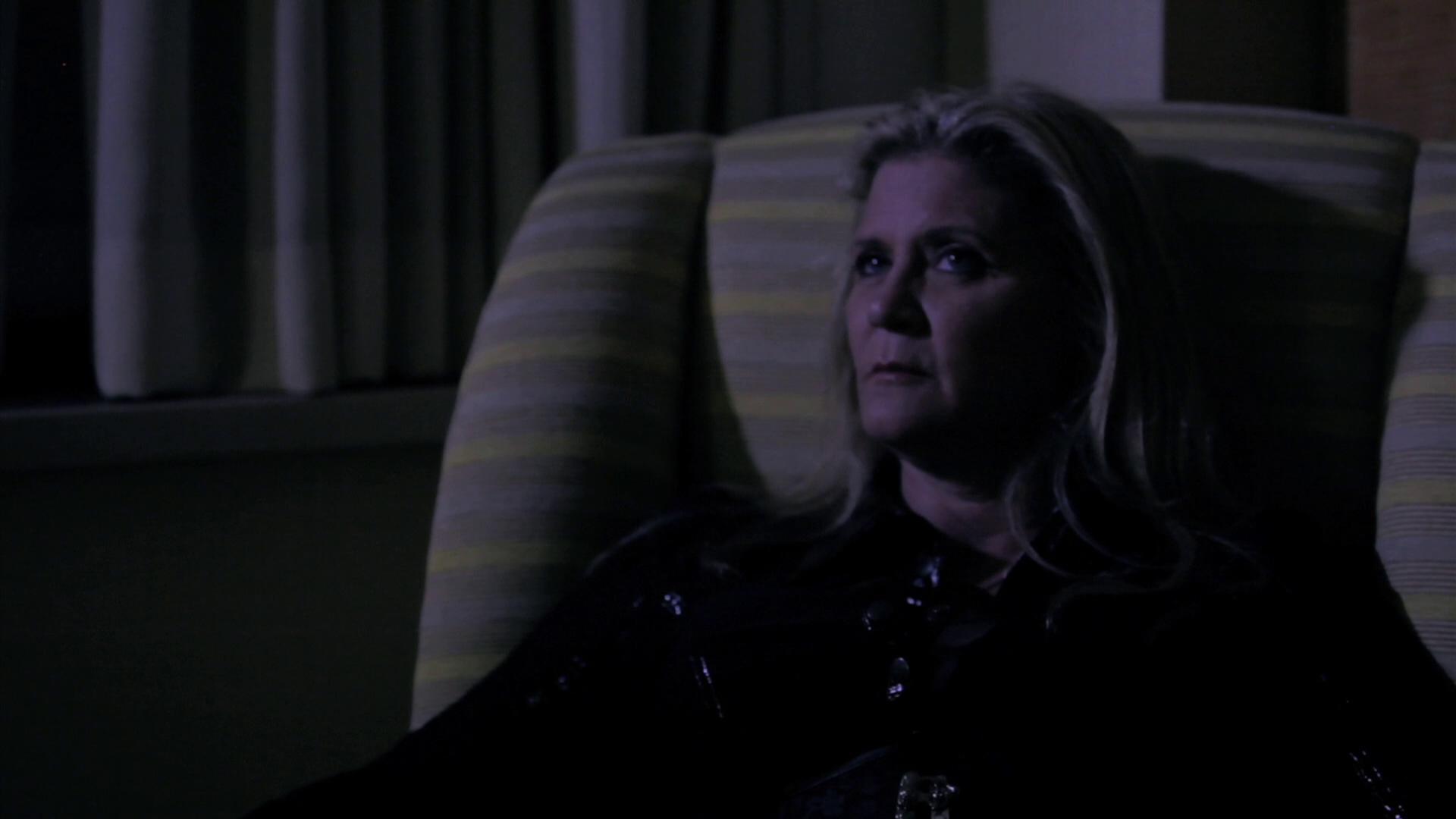 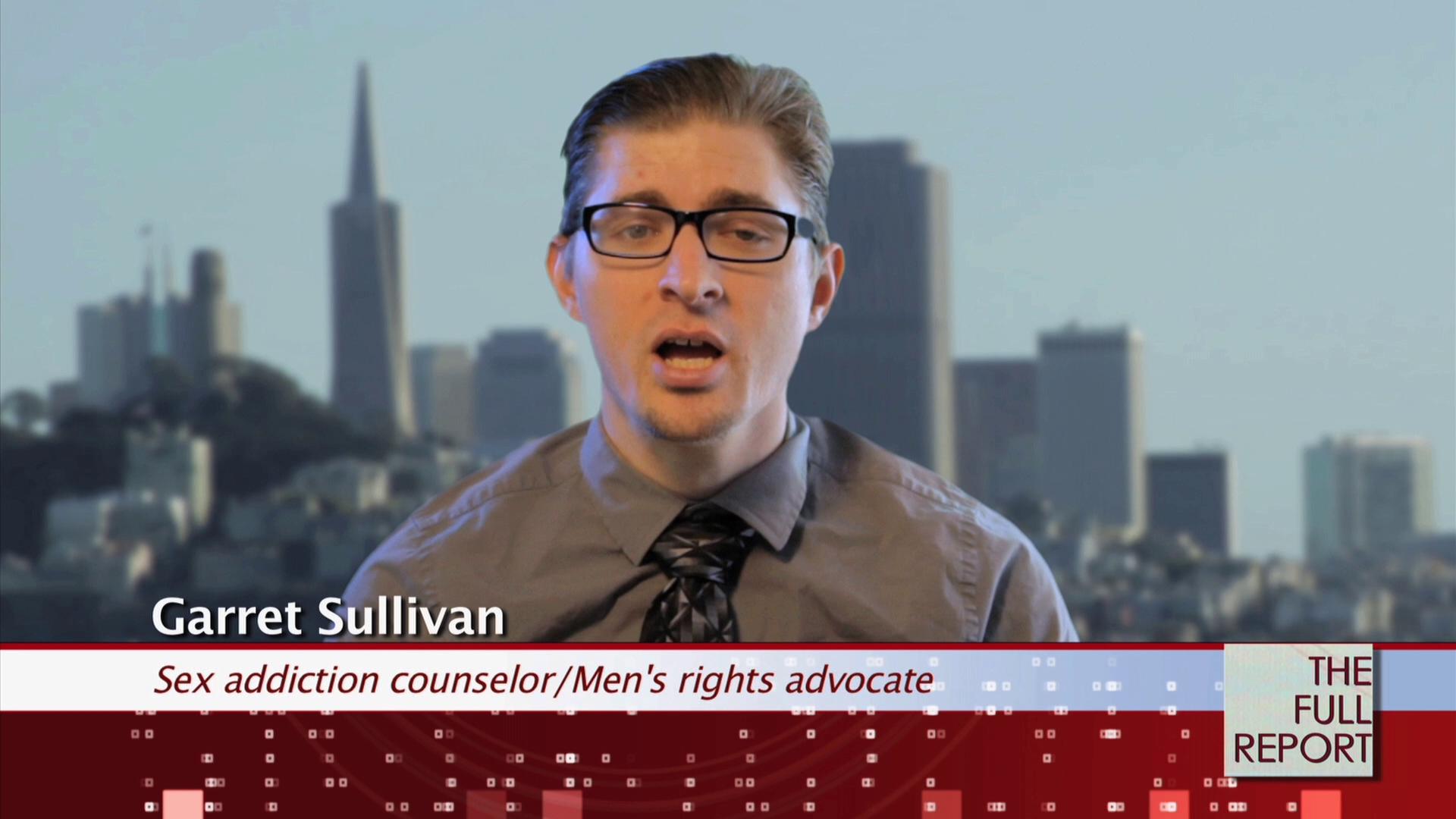 I was pleasantly surprised with Streets of Vengeance.  Personally speaking, I’m still on the edge when it comes to watching slasher films, only because of my lack of experience with them.  But, this movie provided an overall fun experience that fit right into my earlier experiences with the genre, and ultimately made for a great time.  The visual presentation of the Blu-ray release was absolutely well done, and really looked great as I watched through it the other night.  The audio track did leave a lot to be asked for since it is only a 2.0 mix, at least get into the habit of packing a lossless 5.1 mix with your releases guys!  There are a ton of special features included with this release, which is very much unlike your standard release from Olive Films, and this trend should be continued upon with their future releases.  If you’re on the fence about checking this release out, I would absolutely recommend it if you’re a fan of films like this.  Streets of Vengeance was made available onto Blu-ray and DVD last week on July 24. 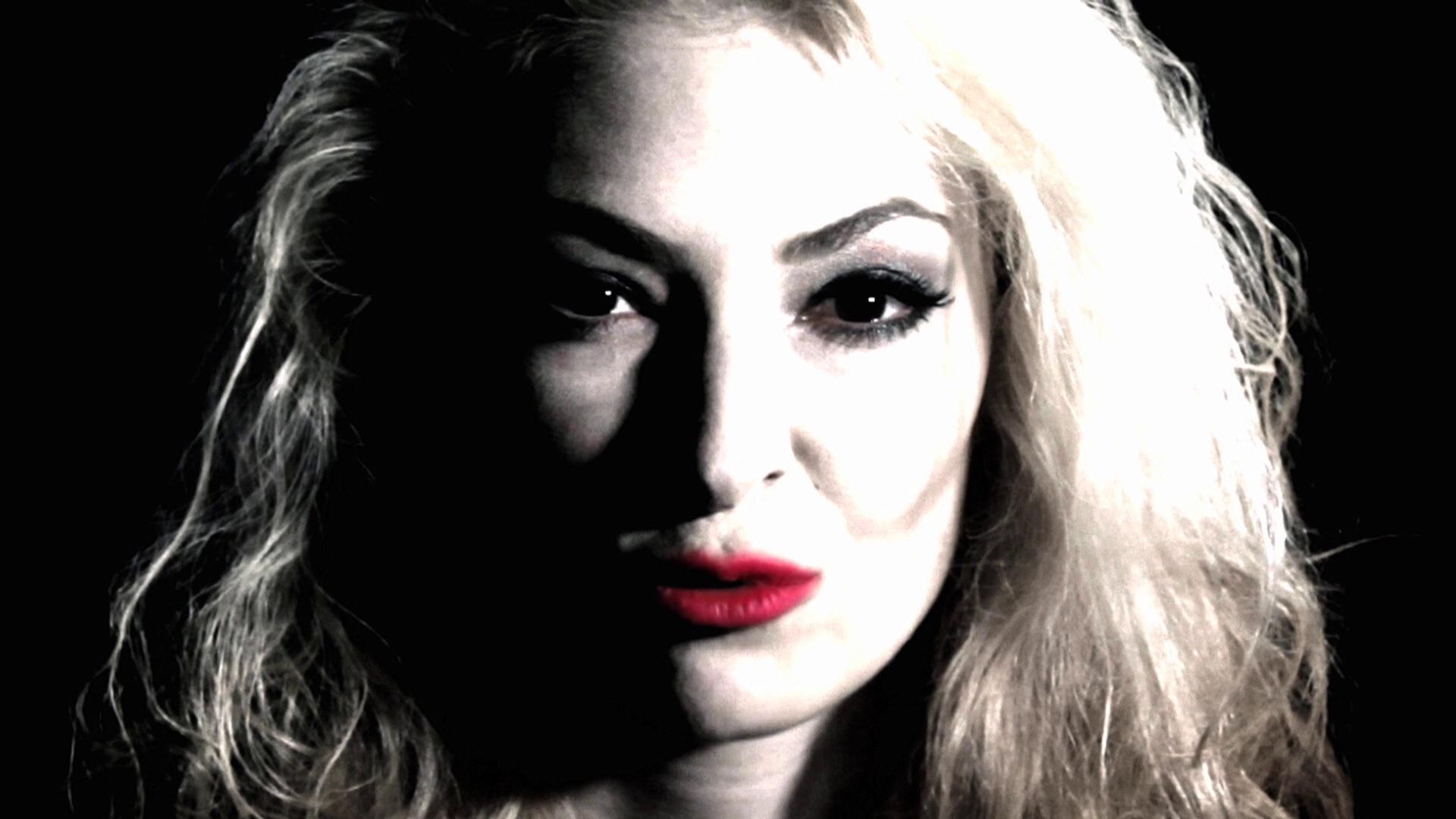