It’s hard to hear the name Guillermo Del Toro and not expect something great.  His name has become synonymous with the strange and strangely beautiful.  He is constantly changing those expectations and heading into different ventures from Hellboy to the unforgettable Pan’s Labyrinth to the blockbuster Pacific Rim.  He is well known for his interest in strange creatures, his roots in Hispanic culture, and the people they are involved with.  He also has one of the largest private collections of strange artwork.  Which brings me to the relatively unnoticed series The Strain.  I remember when I first saw the trailer for the first season and not knowing really what to expect.  I can say with 100 percent confidence that what I ended watching was not it.  The first season is chock full of deep story and character development really gearing up for what could end being a lengthy series of creatures, horror, and people driven plot lines.

The gang’s all back and following the dramatic events of the first season having finally faced The Master we see a very different group of people.  They all seem a little colder, a little wiser, and a lot less naive.  Hoping to finally accomplish finding a viable way to eliminate the infected, there seems to be nothing they won’t do to get to their end goal.  As far as shows go this season is ramped up and is headed to some really great places but it just feels like something is still missing.

I will be the first to admit that I viewed the first season exclusively through HULU the streaming service, so upon starting the second season the very first thing I noticed was a huge difference in quality.  The Blu-ray release has absolutely stunning picture quality.  The second thing I noticed is an obvious change in the budget concerns for Season Two. Typically, most TV series start with a very limited budget until they get their feet off the ground and establish an audience. If you take a look at a show like The Walking Dead or Game of Thrones and compare the first season to the next two or three, it is easy to see how large the budget of a successful show can grow. With The Strain, Season One had obviously done well enough that the beginning of Season Two is back in full force, with a story that is closer to being complete, and with more action at every turn. 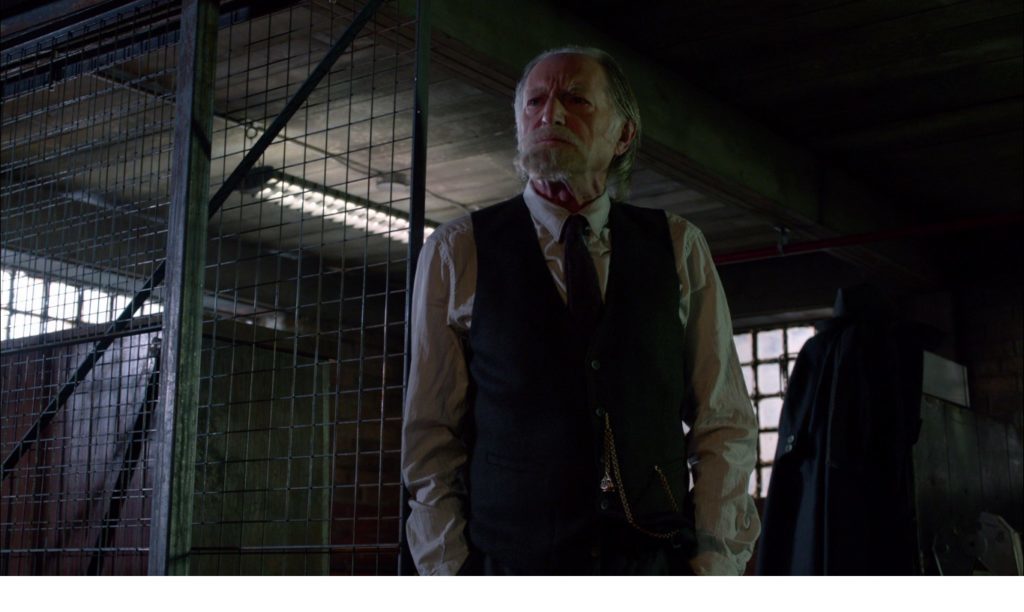 This season looks absolutely amazing on Blu-ray, with the quality of the effects and the action drastically improved, making every episode one heck of a joy ride. It definitely feels as if there was a budget increase from Season One to Season Two and it shows in the amazing visuals.  Everything that was kind of toned down and story driven has been turned to eleven and is no holds barred.   A combination of realistic makeup and practical effects, with the occasional CGI beheading, creates a result that is something special.

For a fairly dark show, The Strain also looks great in terms of contrast and brightness. There were no adjustments that needed to be made to my TV, and I never struggled with seeing exactly what was happening. Although the colors are a bit muted (this is a horror series, after all) the “Del Toro” look is beautifully present throughout the show. There are major props to be given to Fox for continuing to release at least some of their shows on Blu-ray (even if other series have been relegated to the DVD bins) and The Strain is absolutely worthy of the highest quality home media release; it looks fantastic. 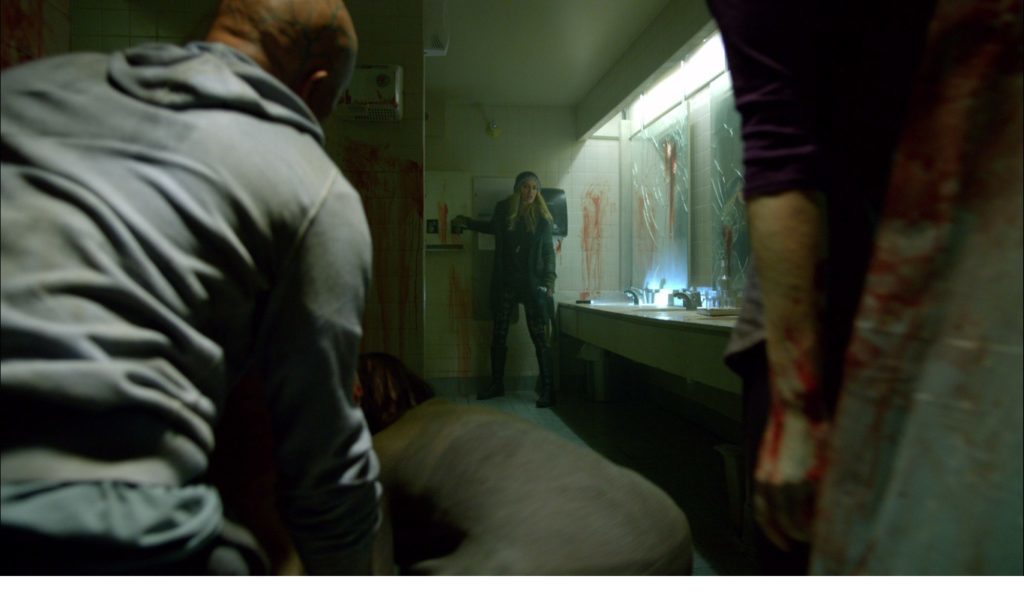 The Strain Season Two comes to Blu-ray with a powerful DTS-HD Master Audio 5.1 track, which does a powerful and impressive job. It is not unheard of that a TV series will be all over the place in terms of audio, as TV releases can often receive less technical treatment than a movie would. However, I have found that television shows, especially those from the “pay cable” channels like HBO, FX, and Showtime, do a decent job with audio quality because they are edited with home viewing in mind, and these companies take special care of their high-budget, original shows. One thing The Strain does well is highlighting scenes moment to moment with accented musical accompaniment rather than the usual course of a consistent soundtrack.  It is more than obvious that Del Toro had a specific vision in mind as far as tone goes and he is sticking to it, and it amplifies the “horror experience” that the show strives to instill in its viewers. Horror fans will truly enjoy the audio on this release, and home viewers everywhere will appreciate the level of care that was given to The Strain Season Two.

This is the part where I give my two cents about Blu-ray packaging for television series’.  Call me old fashioned but I’m used to the clunky television sets of the days gone past, usually chock full of art and inserts. When I first started collecting TV seasons, I learned rather quickly that many of the releases came in grand packaging and rightly so; you spend hours and hours watching these episodes and you are rewarded with decadent packaging. Unfortunately, the trend lately, especially for Blu-ray, is to get rid of that all together and reduce down to a single case with no slipcover, no box, and a spindle. Call me hard to please but we can do better than this, can’t we?

That being said, I absolutely love the artwork on the outside of this case, it is vivid and is hard to look away from, which is all the more reason to spice it up a bit with better packaging.  My one other complaint on top of this is that the spine is easily bruised, and as you can see in the pictures, this happened simply in transit on its way to me. I cannot imagine what the result would be if it were left alone clunking around the shelves of your local box store. 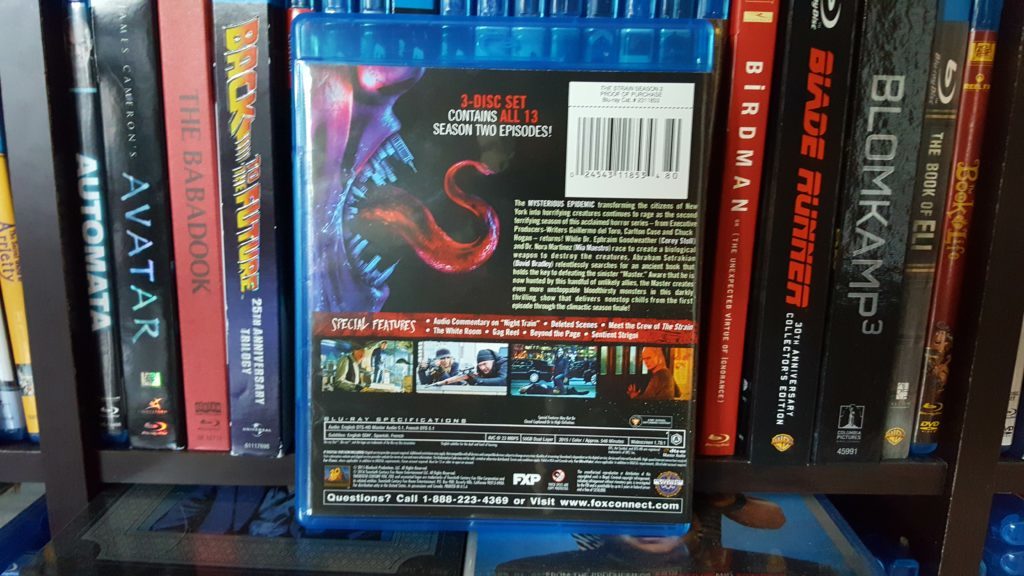 I rather like that the features included, and I thought that they are light-hearted and even playful; a sharp contract to the show, but a welcome one.  It cuts the dramatic tension and nature of the show and we get to experience a different side of the people involved. The special features included are as follows: 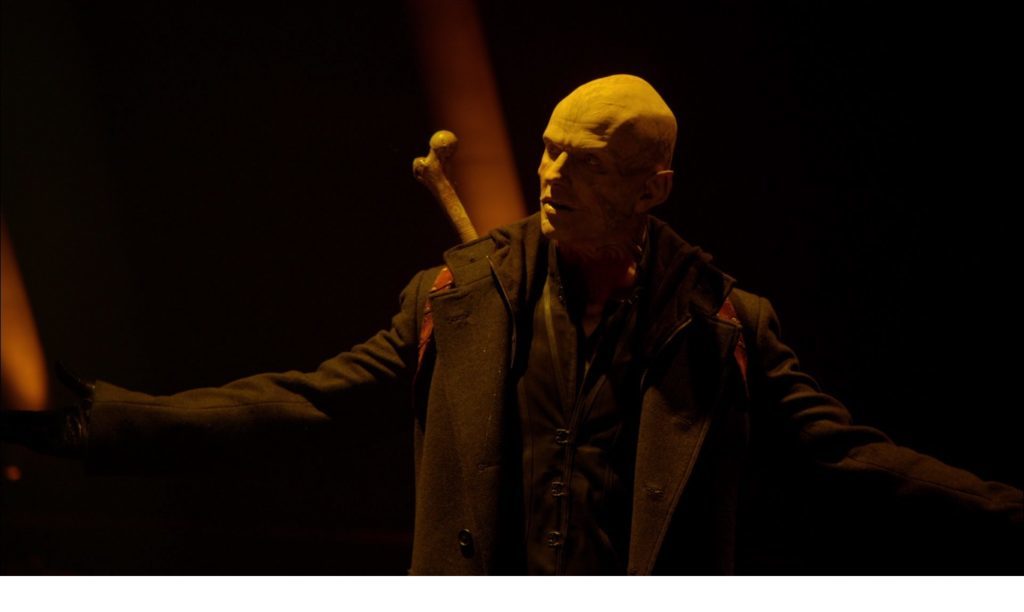 I have to admit I was left feeling unimpressed with the first season of The Strain, as it seemed somewhat ill-conceived in its entirety and I expected a lot more with Guillermo Del Toro attached.  What we ended up with was a play on some of the elements of Blade II ramped up to the Nth degree and chock full of background story. Although, there is something to be said about the fact that I keep watching, and in Season Two it seems as if it is all starting to come together. After watching Season Two it all seems to make a bit more sense and I cannot stress enough just how beautiful some of the visual and practical effects are.  If you are a fan of the series and are curious about whether or not this is worth the purchase, I might recommend waiting to see if they come out with a nice Complete Series box set in a couple of years, as the show is available to stream on services like HULU, as I previously mentioned.  From a collector’s standpoint, it’s hard for me to necessarily justify the purchase when the value will most likely increase with a Collector’s Set down the line. However, if you don’t mind the single package with the spindle then I would say definitely grab this one up, the season is more than enjoyable packed full of gore, action, and story.  You can purchase this release HERE.

Note: This Blu-ray was sent to us for review. This has not affected our judgement or editorial process in any way. Please contact us if you have any questions regarding this proce