Straight Outta Compton is one of the most well known albums of all time. It has fathered a generation of hip hop and has arguably changed the whole of music forever. The story behind the making of this album, and the formation and breakup of the group N.W.A. is equally as interesting, but until now, has not been equally as well known.

Telling the tale of how the gangster rap group known as N.W.A. formed is not an easy, or short feat. Straight Outta Compton clocks in just slightly under three hours for it’s unrated director’s cut, boasting a solid twenty minutes of extra content over it’s theatrical release. But don’t let this intimidate you, the story carries itself very well and never feels like it is dragging. If anything, it leaves you curious for more.

Living in Compton in the 80’s was rough business. Racial tension caused a rift between African American civilians and the white police who routinely denied their rights and treated them unfairly (to say the absolute least). This tension and social climate combined in the mind of a local teenager, who wrote down lyrics based on his life and then let them flow through him to the beat that his friend made on turntables. These two young men were Ice cube and Dr. Dre, the world just didn’t know it yet.

This humble beginning, combined with the help and money from a local drug dealer ultimately led to the formation of N.W.A., the rise of gangster rap, and the birth of a generation of music that has inspired countless fans.

This movie has some of the most spot on casting that I’ve ever seen. Getting Ice Cube’s own son (O’Shea Jackson Jr. who is a spitting image of his father) to play him could not be more perfect. Corey Hawkins and Jason Mitchell both play perfect impressions of Dr. Dre and Eazy E, respectively. As someone who has grown up listening to this music, and seeing the music videos, I was worried that a misstep in cast would tear me away from the experience, but instead, I was drawn in and hooked from the moment I saw these three in the same room. The chemistry is fantastic, and the story is engaging and very thought provoking.

The group’s manager is played by the always fabulous Paul Giamatti, who not only was an ally in the group’s struggles against authority, but also played a key role in facilitating the breakup of N.W.A. as well. You’ll find yourself both loving and hating his character by the time the film is through, which speaks to his talent perfectly.

At the end of the day,  Straight Outta Compton is a very well done biography for N.W.A., and is sure to inform and entertain any fans of the group. Additionally, this movie also provides a window into the social situations of the time, giving this film and almost educational value as well. The content can be hard to watch at times, but that only attests to how real this movie feels; don’t let that detract you from giving it a view.

In a film about music, it can be easy to close your eyes and get lost in the beats. But where the music would try and pull you away, the video will keep your eyes firmly glued to the screen. This movie is beautiful, through and through.

Each of the film’s unique sceneries offers up something new and exciting to witness. The streets of Compton, while dark and gritty, display some of the deepest and cleanest blacks, with stark contrasts in the glows of screens or lights, revealing crisp details that never appeared washed out or artifacted. Clubs and concerts display such a wide range of color and clarity, you will feel present. Textures will pop out in a way that makes them feel tangible.

This is definitely one of the most visually exciting blu-ray that I’ve picked up in quite some time. I would consider this reference material.

When watching a movie about a musical group, you expect a certain level of quality for the audio track, and I was definitely pleased with how this release shaped up.

Given the bass heavy focus on a lot of the music, this track will give your subwoofer a bit of a workout, but never seems to detract from the mids or highs at any point. On the contrary, club and concert scenes are extremely pleasant and tight feeling, and the vocals come through clearly, without any distortion.

Scenes in the studio while the group was recording their songs were especially interesting to see. They cut real audio of the songs in with the actors singing in a way to calls out the difference that studio production makes and I found it absolutely fascinating to hear. It further drove home how great the casting was here. If you know a fan of the group, invite them over and show off this disc!

The target exclusive steelbook version of this movie features art both on the outside and inside of the shell, giving it a nice quality look. This one will look great on the shelf, and will be a welcome addition to steelbook collections. Along with the case, you also receive: 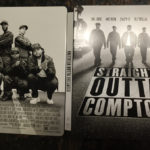 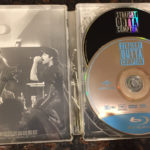 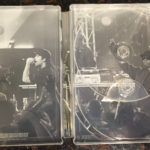 While there might not be a lot of content here, time wise, there is a fair bit of interesting things to see. Real members of N.W.A. show up to discuss their history and the movie, which is a nice touch, and brings a sense of legitimacy to the project. Fans of the group will undoubtedly appreciate all of this, but if you aren’t looking for more about the group, these features may not be for you.

Straight Outta Compton is a sure shot for fans of rap music, but it should also please a wider audience as well. At the core, it delivers a very strong and passionate portrayal of a group of individuals who rise to stardom while fighting against the racism and prejudice against them. It dares to take a long, hard look at a time and place that has been conveniently forgotten in the mainstream. Do yourself a favor and give it a shot.