In 1980, Gene Wilder and Richard Pryor would be seen for the second time on screen together in what could very well be considered one of the best duos of all time.  Their ability to play off one another so naturally in these films is something magical.  The film Stir Crazy would go down as one of Pryor’s most memorable and, unfortunately, one of Wilder’s least remembered.   The moments they are able to create in this film are just plain hilarious and timeless.  Comedy has changed drastically over the years and I fear a film like this could not be seen through the same lens as it was upon release, but instead will forever be deemed as a classic.  It is my hope that like most films of this era, the appreciation for such films will only grow.

Stir Crazy is important for many reasons, especially now that Gene Wilder has passed.  It is important to know where so many of our comedy roots have come from and it is films like this.  It could be argued that Wilder had already hit his peak by the time he did Stir Crazy, having been in Willy Wonka & the Chocolate Factory, Blazing Saddles, and Young Frankenstein (which to this day are known as some of the greatest works in comedy of all time) when he started to almost exclusively act in films alongside Pryor.  This would only be the second in the series that they starred in together but it is to this day my second favorite of the bunch only to See No Evil, Hear No Evil.

Our story follows two friends, how they met and their exact relationship seems to be of no importance, who have both just lost their jobs when they decide to travel across the country as to pursue a new life (an oddly similar beginning to Dumb & Dumber I might add) when the worst happens, they get arrested on suspicion of bank robbery.  They get sentenced to 125 years in prison in what might be one of the best sentencing scenes of all times.

Like most great comedies of the era, the initial setup was not nearly as important as the execution of the physical comedy and the underlying jokes within the text.  I am convinced that many of our favorites from this time period relied solely on the ability of the actors in the film.  Without the proper cast, these movies would not only have failed but would have been seen as awful altogether.  This film is no different.  When taking the film as a whole and taking the two stars out the equation, it does not even sound all that appealing; however, that is the beauty of this duo, there was nothing they couldn’t do. 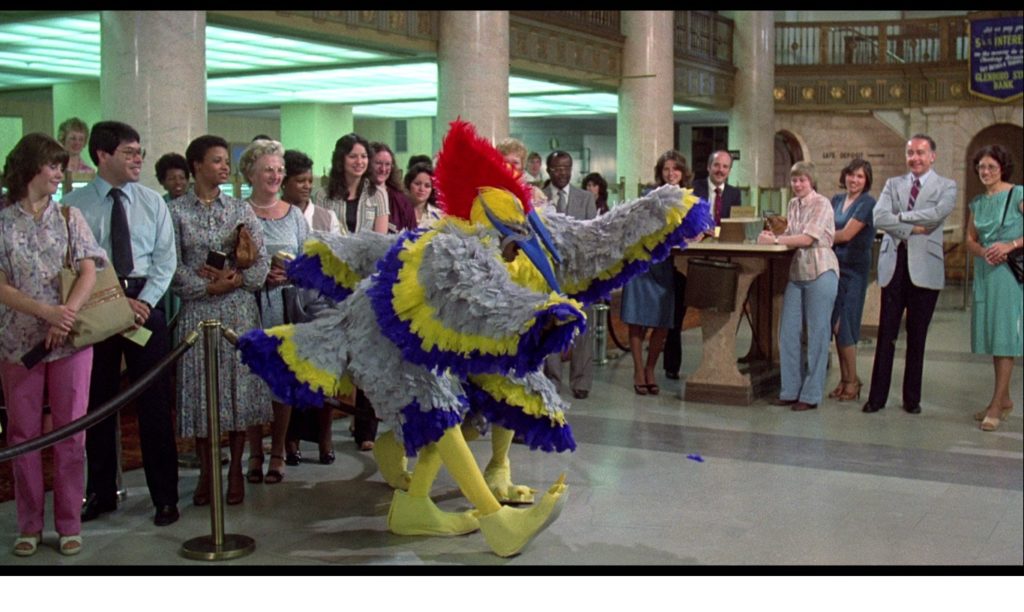 The film was obviously made in the eighties.  The angles, the graininess, and the overall style are obviously reminiscent of the era.  However, the transfer to Blu-ray does make a difference overall.  There are definitely some struggles moment to moment and even entire scenes.  I’m thinking specifically about the car scene towards the end comes to mind where the camera shakes and the quality really starts to suffer.  What is great is the film relies so heavily of the physical abilities of Pryor and Wilder that often the quality is not a problem because, if we are being honest, no one is buying this film for the amazing graphics, we are buying it to laugh our asses off.  So in that regards, I can say confidently the picture quality does not interfere. 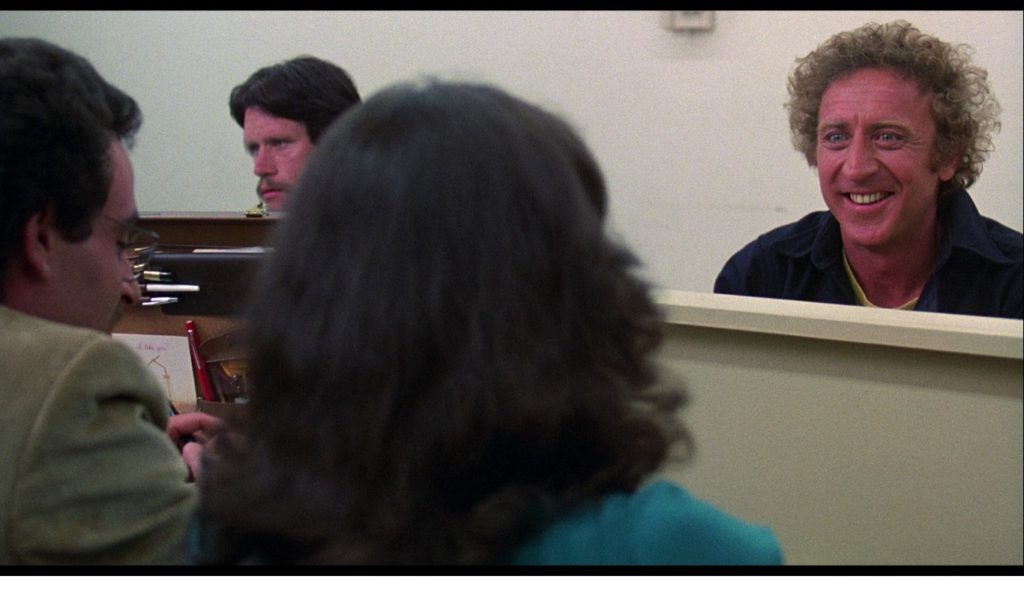 There really isn’t all that much to say, in regards to the audio for Stir Crazy, which comes to Blu-ray packaged with an LPCM 2.0 Stereo audio track.  The soundtrack isn’t particularly noticeable or great.  There are no grand special effects where sound would be an issue.  What I did notice is the fact not once did I have to adjust the volume.  For an older film, I usually have to crank it all the way up for the duration of the film with several adjustments but Stir Crazy seemed to remain at a reasonably consistent level as far as volume is concerned and, in the moments it mattered, wasn’t too hard to hear. The audio seems to be unremarkable, yet reliable.

This is yet another example of no thought going into the packaging.  I know it isn’t reasonable even for space concerns for every movie to have grand packaging, but this one really feels kind of cheap.  The packaging is the standard eco-packaging with artwork straight from the DVD packaging from before, just condensed down to size which upon initial release of blu-ray was all the rage. It just seems like kind of a shame that such a classic comedy didn’t seem to receive a second thought upon transfer. 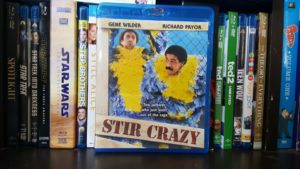 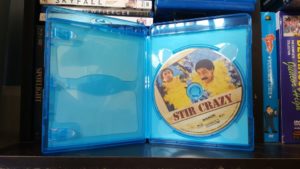 This is where I am really disappointed.  There are no special features included in this release.  You would think that between the thirty-six years since initial release, some remnant of extras would have been included or thought of.  However, I do understand that in comparison to some of the other films the duo were in together, this film has not received nearly as much of a following. Even with all that considered, it’s still disappointing. 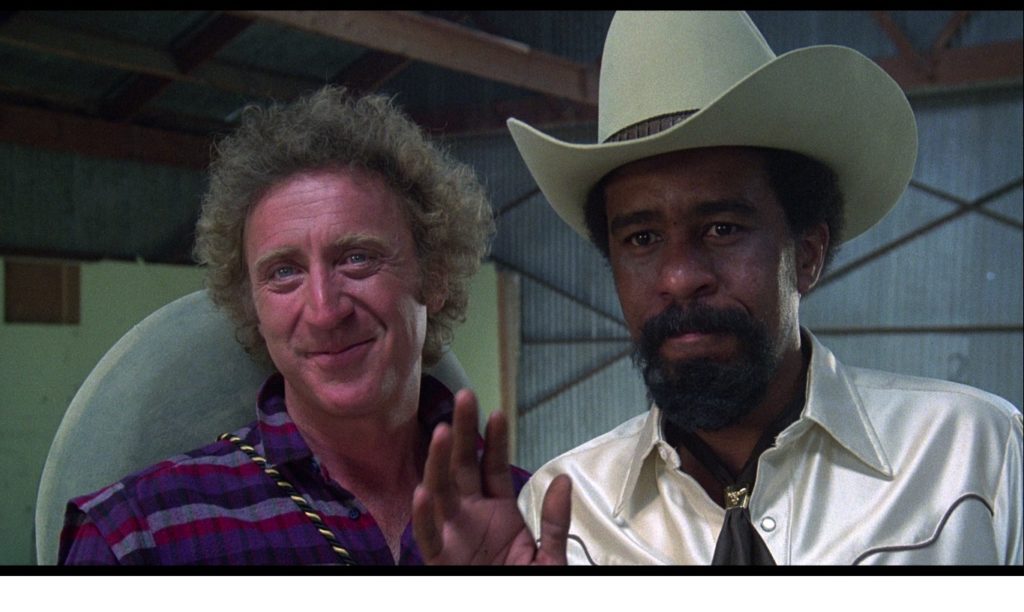 There is one simple fact to consider when looking to purchase this film – it is hilarious.  There is nothing quite like the combination of Wilder and Pryor and there never will be. There are absolutely unforgettable moments in this film and for that, I would say definitely worth owning.  However, as far releases go, I am not impressed at all.  The lack of care that was taken into the release does not make it that desirable.  I would not be surprised if we see the price of this film go up in the next few months and my suggestion would be to wait until it is at a reasonable price.  I found it for around five dollars but I would have paid ten.  You can purchase this release HERE.

Overall 3/5 -Recommended at the right price