I happen to be pretty enthusiastic about Star Wars. So enthusiastic, that I spent most of my break between my final semesters of undergrad this past January catching up on the new expanded universe novels published by Disney; novels such as Rogue One: Catalyst, Tarkin, and Lost Stars. One of the last novels I dug into, A New Dawn, was all about this former Jedi named Kanan, who’s dedicated his post-Clone Wars life to drifting through the galaxy, hiding from his past and his Jedi training. Caught up in a whirlwind started when an Imperial efficiency expert visits the mining operation he’s working for, he ends up joining the cause of a lone Twi’lek named Hera. As the book ends, they sail off into the darkness of the galaxy together, Kanan fallen hopelessly for Hera, who’s too busy trying to ignite the flames of rebellion against the empire to pay him any attention. 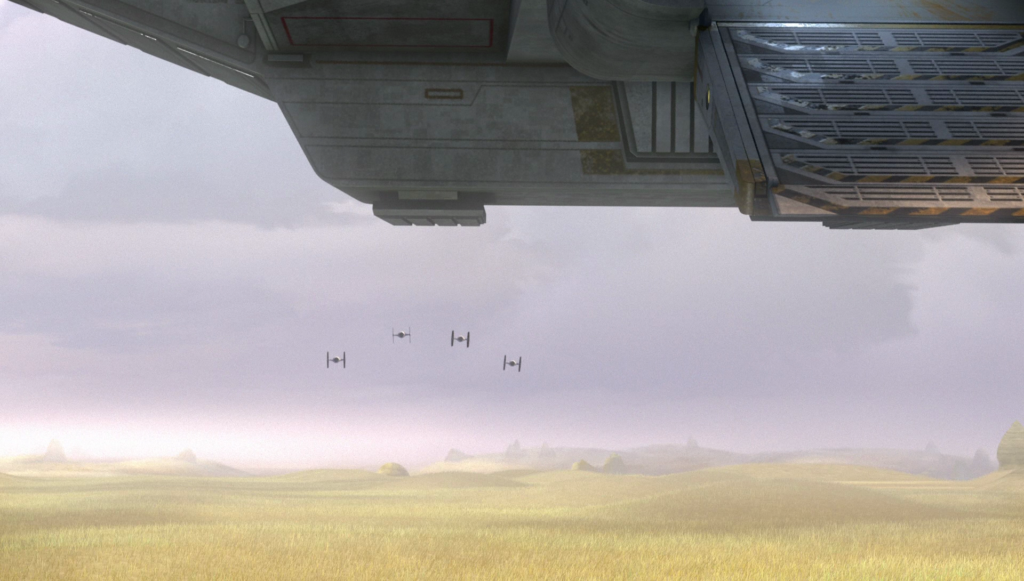 It was a pretty insignificant book, with a villain and plot that overall had little impact on my vision of the new Star Wars universe, until I dug around and learned that this novel was in fact a prequel to Star Wars Rebels, the Disney XD animated television program. Although I was mostly unimpressed with the book, I felt a slight desire to see what these two characters ended up amounting to, and had read positive things about the show. A few Amazon.uk clicks, and a few weeks in waiting, and now here we are….. 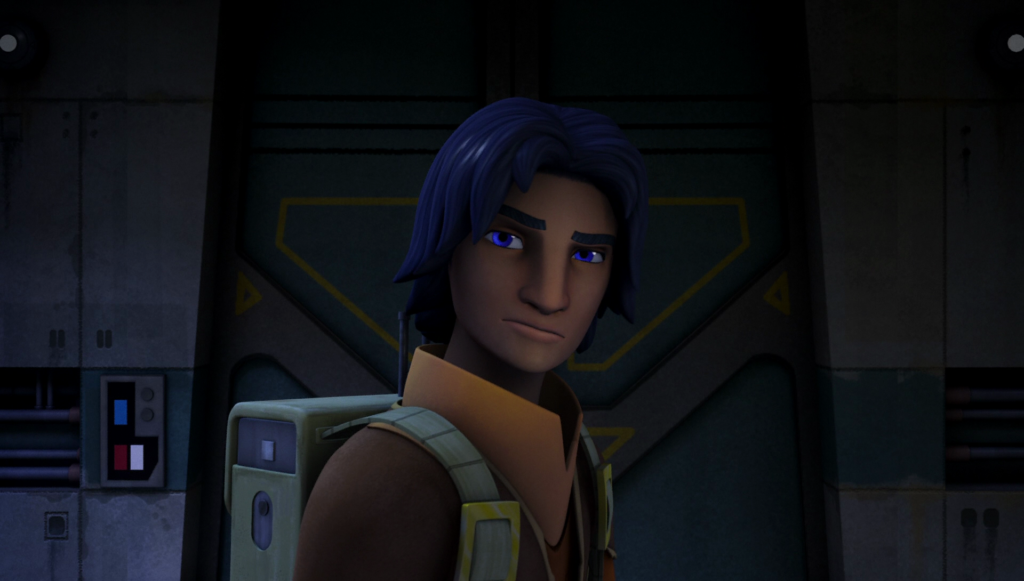 Star Wars Rebels: Season One is the story of Ezra, a young, rambunctious orphan who hails from the Outer Rim planet Lothal. Recognizing his talent and force sensitivity after being forced to chase him during a failed attempt to rob them, he is picked up by a mysterious gang of bandits led by former Jedi Kanan and pilot Hera. Given no choice but to join them on their mission to antagonize the Imperial presence on Lothal, Ezra is taken under Kanan’s wing, as he attempts to train him in the ways of the Jedi and hone his skills with the force. While Ezra join the crew of Hera’s ship, The Ghost, on missions to help further the goals of the rebellion, he’s forced to learn how to work as a team with fellow crew members Sabine, Zeb, and the wonky astromech droid Chopper, all the while working with Kanan to escape the grasp of the force wielding Jedi hunter, The Inquisitor. 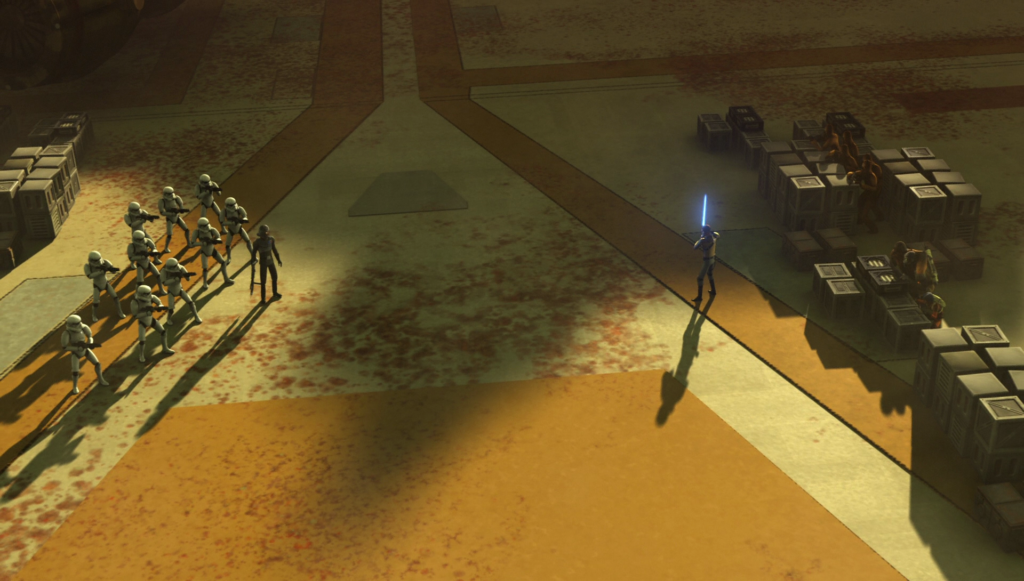 I burned through Season One of Rebels over the course of two days. I guess you could say I devoured it. I went in with some pretty low expectations due to my feelings regarding the prequel novel, and came out the other side mostly impressed. What Dave Filoni and his creative team here have accomplished is smooth, incredibly well paced, and written in a way that will satisfy both kids and their most likely long time Star Wars fan parents who are watching to catch a glimpse at Lucasfilm’s new vision for their beloved franchise. Over the course of 15 episodes, they manage to completely reorganize the rebels we’ve come to know and love from the original trilogy, turning them into a modernized band of terrorists cells. It feels darker, but a natural reflection of the world we live in; it’s amazing that they’ve taken a show targeted towards kids and managed to hit home so effectively.

Beyond their dramatic new vision for the basis of the Rebel Alliance, they present a brand new side to the master-padawan dynamic that was so often marginalized in the films, and obscured underneath a layer of war in The Clone Wars. In Rebels we find a former Jedi at his lowest point, confused and reluctant to take on a padawan during the dark times of the Empire in Kanan, and an ambitious, impatient, stubborn apprentice in the young Ezra. In many ways, he parallels our beloved Luke Skywalker, but rather than be taught by Obi Wan and Yoda, he’s got a mentor who’s gone back and decided to get a 2nd degree in education, 15 years out from the last time he’s studied his relevant field of study. It’s refreshing to come up against a Jedi who’s willing to admit his faults, and bestow a vision of the Jedi ways that isn’t so rigid and idealistic. 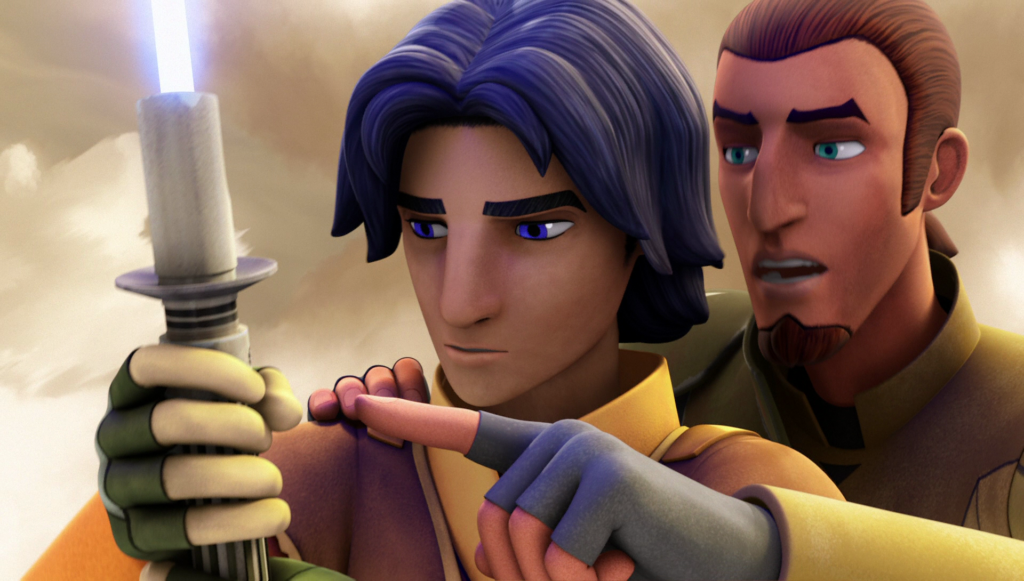 When the show isn’t focused on the ways of the force, and embracing the Jedi narrative, we’re treated something more along the lines of a Firefly-esque series of missions involving smuggling, shaky-ethics, and on more than one occasion outright terrorism. If I could come up with a solid comparison, it’s like Firefly, but with a shot of the wanton violence and tone that we got in the recent Rogue One. Casualties mount up quickly, but due to the skilled writing, and the heavily stylized animation techniques applied, it never feels inappropriate for its target audience. Instead, it treats stormtroopers much like the droid armies and clones of The Clone Wars, using violence against them as an opportunity to allow the non-Jedi members of our crew time to flex their skills, and develop as organic characters. No, not characters; rebels.

The first season of Rebels really only has one glaring flaw, which lies in its new villain, The Inquisitor. He serves as a foil to Kanan and Ezra, but amounts to little more than a snarling face and a means to throw a red lightsaber into the mix. We never get any real chance to dive into his character, or understand how he came to be; he’s one dimensional, and ultimately ends up feeling less like an imposing threat and more like an episodic element of storytelling. By the end of the season, his accomplishments are fairly minimal, and the show seem to head in a direction that makes his inclusion feel contrived. A lot of the new post-Disney era books feel the same way, in that they introduce villains that exist solely to drive forward that story, rather than contribute to the Star Wars universe in any long term way. It’s frustrating, and gives us as a viewer little reason to care about or fear these characters as serious villains.

Moving forward however, Rebels builds into a fantastic climax at the end of its 15 episode story arc that sets up big things. While most of the first season feels like a small, disconnected piece of the Star Wars universe, it’s as if a switch has been thrown, and suddenly the doors to the rest of the galaxy have been opened. As the credits rolled, I found myself thirsting for more, a thirst I plan on satisfying in the upcoming weeks. Star Wars Rebels: Season One is a mostly effective, engaging addition to the Star Wars canon. It goes down smooth, moves fast, and has some excellent action sequences and humor that make it fun for all audiences. 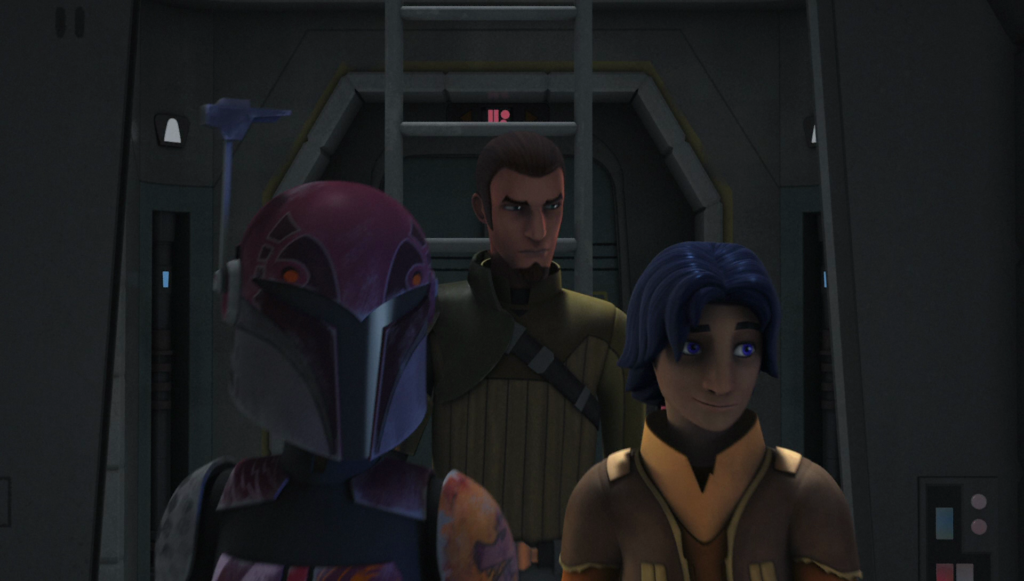 Rebels is a 3D CGI produced animated television program, and while it has dropped the cinematic 2.35:1 aspect ratio of the earlier Star Wars: The Clone Wars television series due to budget concerns, maintains many of the characters that show possessed on home video. The animation style is more aligned with the concept drawings of the legendary Ralph McQuarrie than it is with The Clone Wars, but retains the beautifully saturated colors across the spectrum, and sharp animation quality. It occasionally struggles with video noise in a noticeable way, but other than that is a flawless animated presentation. 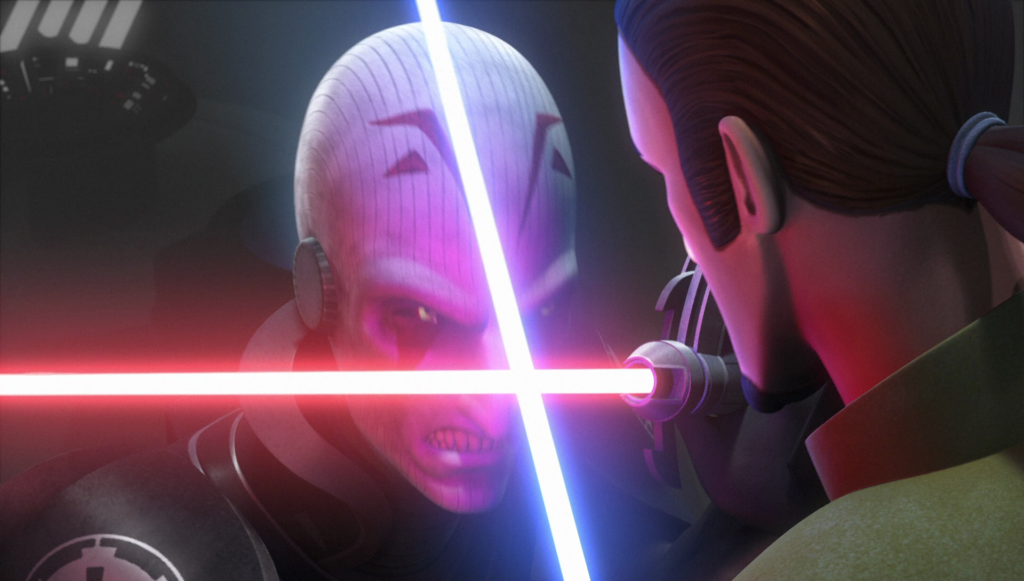 Man, talk about coming up short. This is Star Wars. Star Wars releases almost always feature some of the loudest, most active sound mixes of all time. So when Rebels comes out the gate with a sound mix that infrequently uses surrounds in an effective way, and has pretty weak low frequency effect implementation, it comes off as a major disappointment. Shootouts occur frequently, and space and air battles happen on a regular basis, but shots don’t ring out into the surrounds, and as The Ghost whooshes into the frame, it’s mostly a front speaker affair. Giant structures topple, and tie fighters explode with little more than a muffled roar from the subwoofer. As far as Star Wars sound mixes go, this one falls pretty low on the list. Also, cmon, no lossless audio? Disney plz.

Released to home video by Walt Disney Home Entertainment, the European Release of Star Wars Rebels: Season One is packaged in the standard, thicker size Blu-ray keepcase that is typical of the region. The front artwork features Ezra and his laser slingshot above the show’s stylized title, surrounded by all crew of the Ghost while The Inquisitor lingers in the background. It advertises the Disney XD network quite prominently. The back features screencaps pulled from key moments of the first season, a paragraph about the season, a list of features, and technical specifications and ratings guides. On the inside, you can find an episode title guide on the left, and a menacing picture of The Inquisitor surrounded by stormtroopers on the right. Colorful and pleasing packaging for a bright and often colorful television program! 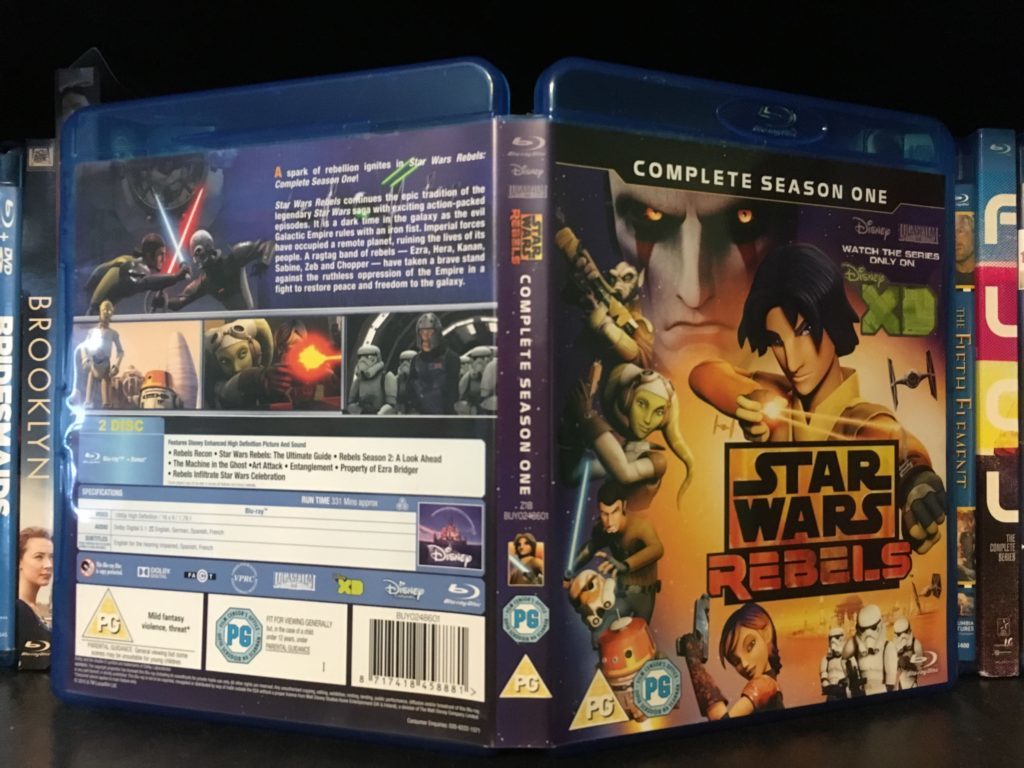 Rebels Recon – a series of 5 minute clips, in which the Star Wars web team goes behind the scenes of each episode on disc 1, talking with cast and crew members about the development of the series as well as the episodes they pertain to. Each one also includes a sneak peek into the next episode.

Rebels Recon – same deal as above, but for the episodes featured on disc 2. 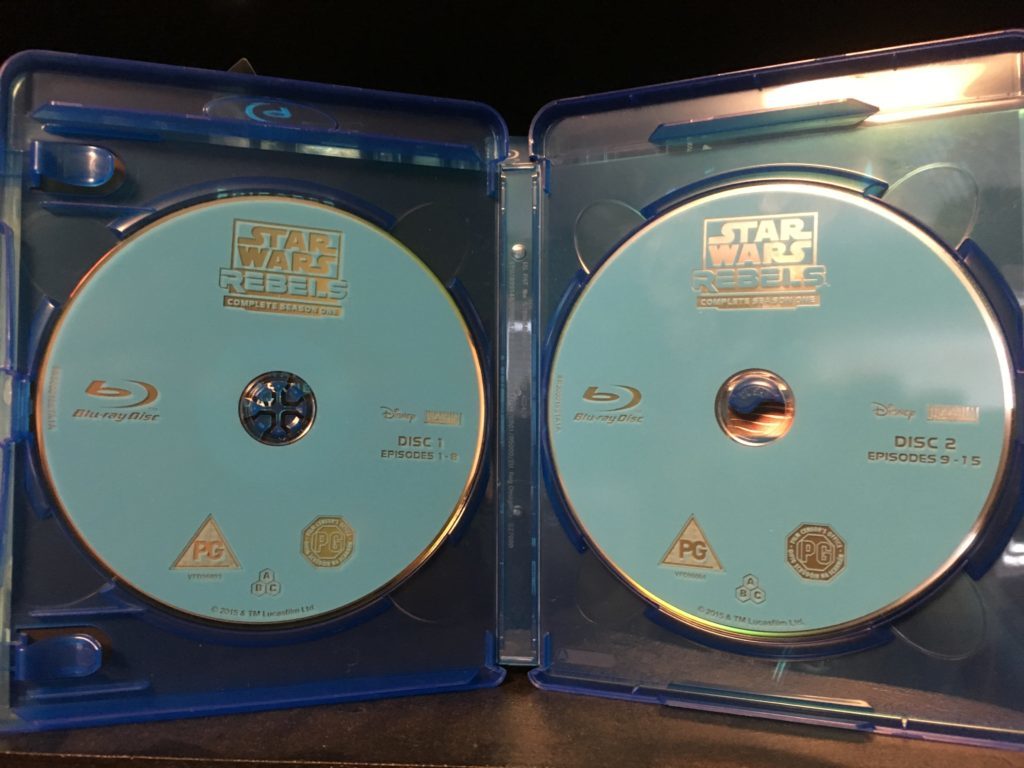 Star Wars Rebels: The Ultimate Guide – a 22 minute feature that gives context to how the crew of the Ghost was assembled, bios for the characters, and their relationships as they develop over the season. Basically a glorified recap of the entire season, from the perspective of Kanan.

Rebels Season 2: A Look Ahead – a 7 minute preview, led by series creator Dave Filoni who provides some insight into how the program will develop.

The Machine in the Ghost – a 3 minute long short cartoon about Chopper’s role on the Ghost during an intense Imperial tie fighter attack. Also highlights the playful relationship between Kanan and Hera.

Art Attack – a 3 minute long short cartoon in which Sabine distracts and later takes down a squad of stormtroopers using a art and color as her aid.

Entanglement – another 3 minute short cartoon in which Zeb takes down his own squad of stormtroopers on Lothal, highlighting his skills as the muscle of the Ghost crew.

Property of Ezra Bridger – the last 3 minute short cartoon, in which Ezra loots a downed tie fighter, and uses his force senses to escape the wrath of the Imperial pilot inside the ship. 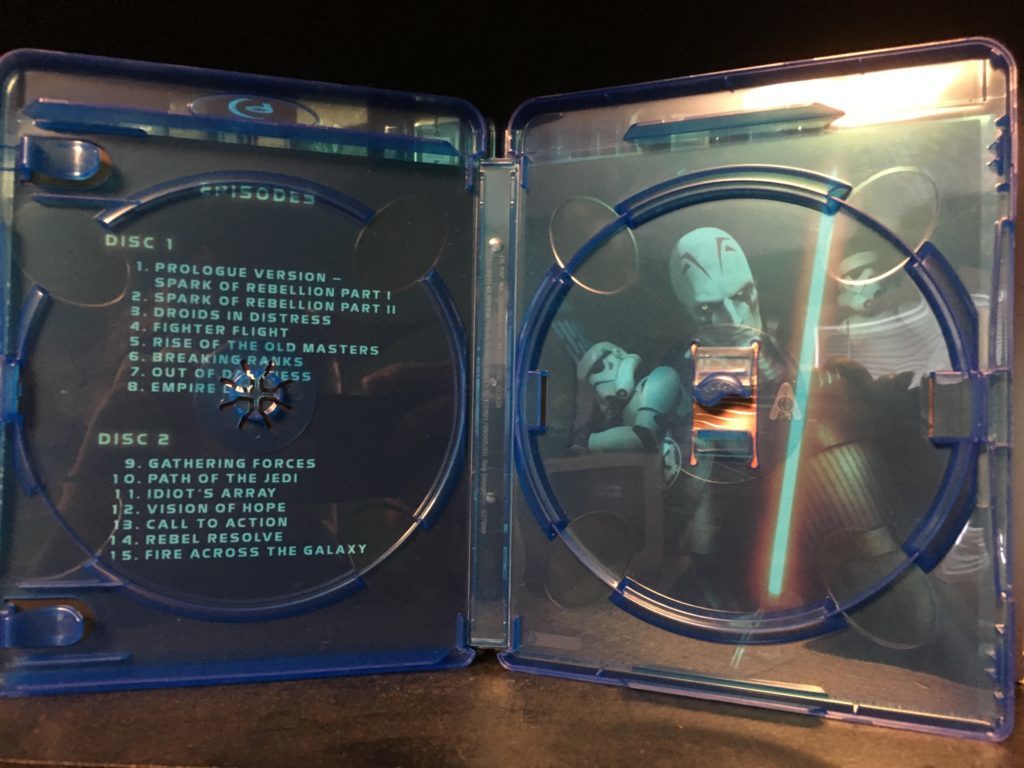 Overall, not a bad set of extras to go alongside a colorful, but minimal package for the first season of Star Wars Rebels. 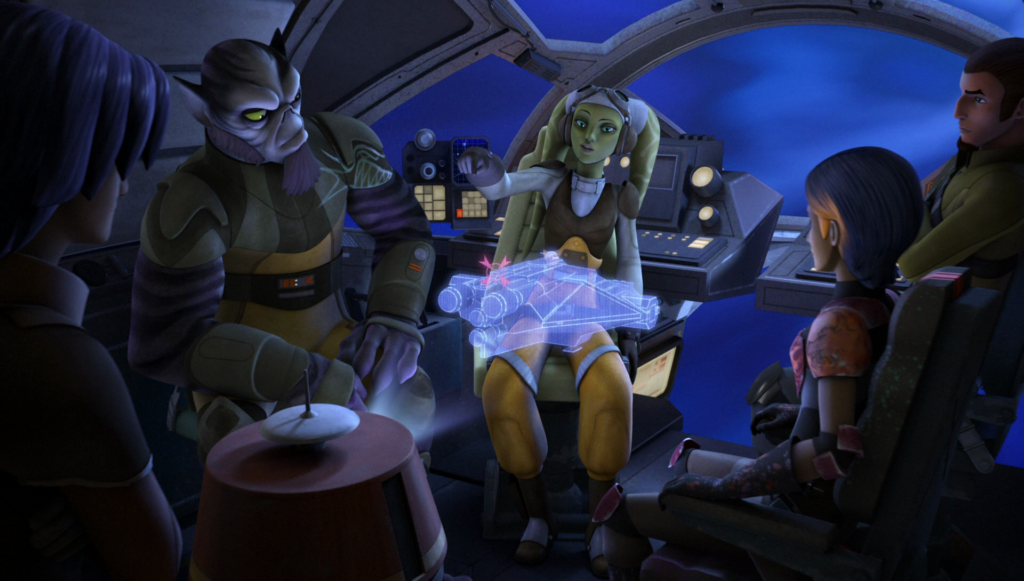 Man, all issues aside, I was so into Star Wars Rebels: Season One. It’s not flawless, but in its final moments it builds into something big that I am so excited to tear into. I have Season Two on tap for sometime in the next two weeks, so expect to hear something from me on that release soon. It’s fun, well paced, and functions in a way that will please both younger viewers and older Star Wars fans, and has enough action and character development to keep things exciting throughout 15 episodes without faltering. The Blu-ray release from Disney features excellent video, packaging, and features, but delivers a pretty weak sound experience. Surprising for a Star Wars release, especially when I enjoyed the Clone Wars releases. Here’s hoping we get a little more umph from Disney’s season two release!

Star Wars Rebels: Season One is available both in the US and EU. The only difference between releases is  minor packaging differences.