Star Wars: The Original Trilogy Blu Ray delivers excellent video (minus the controversial CGI) and solid audio, although for extras you will need to upgrade to the Complete Saga Edition.

The Star Wars Original Trilogy has been released on so many different formats and so many different versions that even the Blu Ray release offers two separate editions, not including the Complete Saga. The edition I own is found here, and must be out-of-print as it is only being offered through third party sellers on Amazon for ridiculous prices. The newer version of the Original Trilogy, found here, includes DVDs and is thus a six disc edition compared to my three disc edition, but other than that it does not offer any new materials outside of a different packaging. For the most hardcore Star Wars fans, I would suggest buying the Compete Saga Edition, found here. It is much pricier, at around $90 compared to the $70 total you would spend for the Original Trilogy and Prequel Trilogy, but it includes many more extras and can often be found on sale around the holidays, which makes it a much better buy than the two bare bones Trilogy sets which lack in extras.

Regardless of your feelings about the Original Star Wars, Special Editions, and CGI additions made by George Lucas since the initial release in 1977, this Blu Ray release is the best you are going to see these films right now. The transfer is gorgeous, and they left much of the original graininess, which I enjoy in older films. I am not a fan of the “digital noise reduction” (DNR) which takes place when many older films are released on Blu Ray and aims to eliminate the grain for a more modern, digital look. I prefer the films in their original form, and thankfully with this Original Trilogy they have kept the DNR to a minimum. The colors are vibrant, the action is smooth, and it is hands down the best that Star Wars has ever looked. 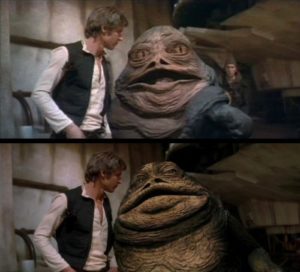 For Star Wars purists, the additional CGI added during George Lucas’s edits when he re-released the Original Trilogy in 1997 are obviously an issue. However, with the exception of the famous scene in the cantina featuring Han Solo and Greedo, a lot of the changes are minor and do not detract from the viewing experience. Do they look awkward and out of sorts in place next to the original shots from the late 70s? Sure, but it would only bother the most hardcore fans and even they should be able to move past that and realize that this is the best Star Wars we have right now, and we need to work with what is available if we want to view the films in their new, exceptional HD transfers.

There is no doubt that this is the best that Star Wars has ever looked in your homes, so will the sound stack up to the picture quality’s exceptional score? Yes, and it is actually the best part of this release. The Original Trilogy sports a 6.1 DTS-HD Master Audio track. The 6.1 mix is a bit different, as typically most films would be released in 5.1 and most newer releases or new 4K remasters of older films would carry the 7.1 sound mix. With a 6.1 mix, there is simply a typical 5.1 track with additional sound coming from a single rear speaker, if you have them. If you have a 7.1 system, the rear sound will likely only come from one of the rear speakers, and on a 5.1 system the sound reserved for the rear speaker would be split between the two side speakers. The use of a more complex sound mix creates a much more enjoyable viewing experience, as those sounds of blasters or lightsabers being drawn behind the scene create an immersive experience. We have all wanted to get lost in the world of Star Wars once in our lives, and experiencing this Blu Ray release in our home theaters is as close as many of us will get. Overall, the audio is hands down one of the better experiences I have had with the blu Ray format, and it is a must have for your collection. 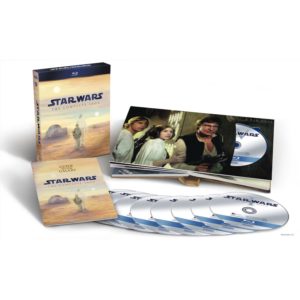 The extras are the only “Dark Side” to this release, which pale in comparison to the “Complete Saga” Star Wars collection that is also available. The only extras on this release are commentary tracks for each of the three films with George Lucas, the cast, and crew, with what is said to be “never before released commentary with archival interviews with cast and crew”. Other than this, there are no special features. In comparison, the “Complete Saga” is absolutely loaded with special features, with over 40 hours of extra content spread over three discs and the entire Star Wars series to date. For the ultimate Star Wars fan, this could easily make or break buying the trilogies as stand alone releases versus buying the “Complete Saga”.

FINAL VERDICT: This is certainly an excellent release if you are just looking to add the Original Trilogy to your collection on a budget. If you have the money, I recommend this Original Trilogy set for those on a budget, but if money is no issue, get the Complete Saga. The additional special features are worth the price alone, never mind the upgraded quality of the packaging and addition of the Prequel Trilogy. You will not be disappointed. Either way, both are highly recommended!