In anticipation of the Blu-ray release of Star Wars: The Force Awakens, we will be offering a “Dark Side” review and a “Light Side” review of the movie, followed by a comprehensive Blu-ray review after the multiple retailer exclusive versions of the film are released.

I saw Star Wars: The Force Awakens at 7:00pm on December 17th, the earliest time at which theaters were contractually able to show it. I waited from 11am to 5pm before I even got a seat in the theater. The feeling is the air was….electric. Waiting all day with some of the most deeply involved Star Wars fans I have ever met was one of the greatest experiences I have ever had. I felt at home. We did trivia, we watched the earlier movies, we talked about the books. It was a great time.

After twenty minutes of trailers, a Lucasfilm logo dropped. The theater fell silent, and the classic line popped up on screen, “A long time ago…..in a galaxy far, far away.”

As soon as those horns blared through those speakers, I was in tears. Ten years after I watched Obi-Wan Kenobi leave Luke Skywalker in the hands of Uncle Owen and Aunt Beru. Ten years after Star Wars was essentially over for us fans, we all got to go back to that special galaxy far, far away. It was a really special moment, something that I may never forget.

Star Wars: The Force Awakens has some pretty big shoes to fill. Not only does it have to fill us in on what has happened in the Star Wars galaxy between Return of the Jedi and now, but it has to tell a brand new story that doesn’t get bogged down by too much exposition. Parallel to that, it had to meet the grand expectations of both old fans and new fans. The market for the movie was so extensive, and so grandiose in scale that the hype was unbelievable. Does it meet that hype? Of course it does.

Star Wars: The Force Awakens primarily tells the story of Finn, a rogue stormtrooper and  former member of the evil First Order, and Rey, a mysterious orphan who was left on the desert planet Jakku. Thrown together by chance, they are forced to work together to escape the First Order, who is searching for a droid in their possession. In the process of escaping, they run into our old friends, Han Solo and Chewbacca. Together, using Han and Chewie’s resources, they set off on a grand journey to return the droid to its rightful owners, all the while being hunted by the murderous Kylo Ren and General Hux, who together lead the ground forces of the First Order. After meeting with the Resistance, led by Princess Leia, they devise a plan to defeat the First Order, who is using yet another super-laser weapon to terrorize the galaxy.

The Force Awakens, rather than throwing us into a brand new story, plays off as more of Star Wars’s Greatest Hits. A perfect way to reintroduce us to the world of the original Star Wars trilogy, we basically get two hours to catch up with Han, Chewie, Leia, and some of the franchise’s most famous supporting characters. We get brief synopses of what they’ve been through, and what they’re up to now. Part of me is crushed at how little we get to dive into their background, but I also understand that our filmmakers didn’t want to shove four hours of context down our throats, and I know that we’ll have plenty of time to get details later.

When I say that this movie is Star Wars’s greatest hits, I truly mean that in the best way. It’s clear to me that J.J. Abrams and his crew are so passionate about the world of Star Wars, that when they set out to make their own, they had a tough time deciding what to not pay homage to. This movie pays such heavy homage in terms of plot to A New Hope and tone to Return of the Jedi, that those who aren’t willing to dig beneath the surface may just write it off as a Star Wars remake of sorts. If you think about, there are some key similarities: a young hero who wishes to leave their desert home to achieve great things, a cantina, the use of Millennium Falcon, and a massive battle over the surface of what is essentially a brand new Death Star and many more. Where this film fails in terms of creating a brand new Star Wars story, it succeeds in creating a new and exciting Star Wars story. The planet Jakku, while closely resembling Luke Skywalker’s home planet of Tatooine, has this deep and storied past that makes it so much more than a desert rock. Our new characters, such as Finn (Jon Boyega), Rey (Daisy Ridley), Poe Dameron (Oscar Isaac), Kylo Ren (Adam Driver), and General Hux (Domhnall Gleeson) inhabit familiar roles, but their energy and commitment to the material shines through, making their characters feel foreign and exciting. After seeing them in the movie, all I want to do is see more of what they’ve got.

Harrison Ford, after stepping away from the role of Han Solo for more than thirty years, provides the emotional backbone of the story through his performance. Aging gracefully, he still hits all of the usual scoundrel high notes, although maybe a little too much Return of the Jedi Han Solo, and not enough Empire Strikes Back Han Solo. His chemistry with new leads and with Chewie and Leia is so funny and energizing that it’s impossible not to fall in love with good ol’ Han all over again. Chewbacca, played at least in part by Peter Mayhew, plays off of Han and the new crew in a wonderfully amusing way, never missing a beat.

Our new Darth Vader for this trilogy, Kylo Ren, while not nearly as intimidating, is a far more interesting character, ripe for development in future installments of the Star Wars franchise. Adam Driver plays the role with a surprising amount of vulnerability, expressing his lines with a completely different style of anger and frustration, placing him in stark contrast to the smooth, and intimidating Darth Vader. A lot of criticism has been directed towards him from fans and critics alike, but I feel that there is so much to explore with this brand new character, that I can’t help but be excited.

Visually speaking, The Force Awakens marks a return to form for the Star Wars franchise. Opting to return to the, “used future,” aesthetics of the original trilogy, The Force Awakens is a beautifully dirty movie. Shot on 35mm film using Panavision anamorphic lenses with one scene shot using IMAX 65mm cameras, The Force Awakens is a sharp, colorful movie. J.J. brought his favorite collaborator, Dan Mindel, who shot both of his recent Star Trek films onboard for Star Wars, and the result is striking. The film looks like a hybrid movie, combining the grainy, soft photography of the first Star Wars movie with the sharp, brightly lit future-ish photography of his recent Star Trek movies to create a product that is unbelivably brilliant. The look of the film, even under the weight of copious layers of CGI, feels so much closer to what we think of when we think Star Wars than what George Lucas was able to achieve with his three prequel movies. The movie feels like a natural continuation of the style of Return of the Jedi, Empire, and A New Hope. It looks and feels right. 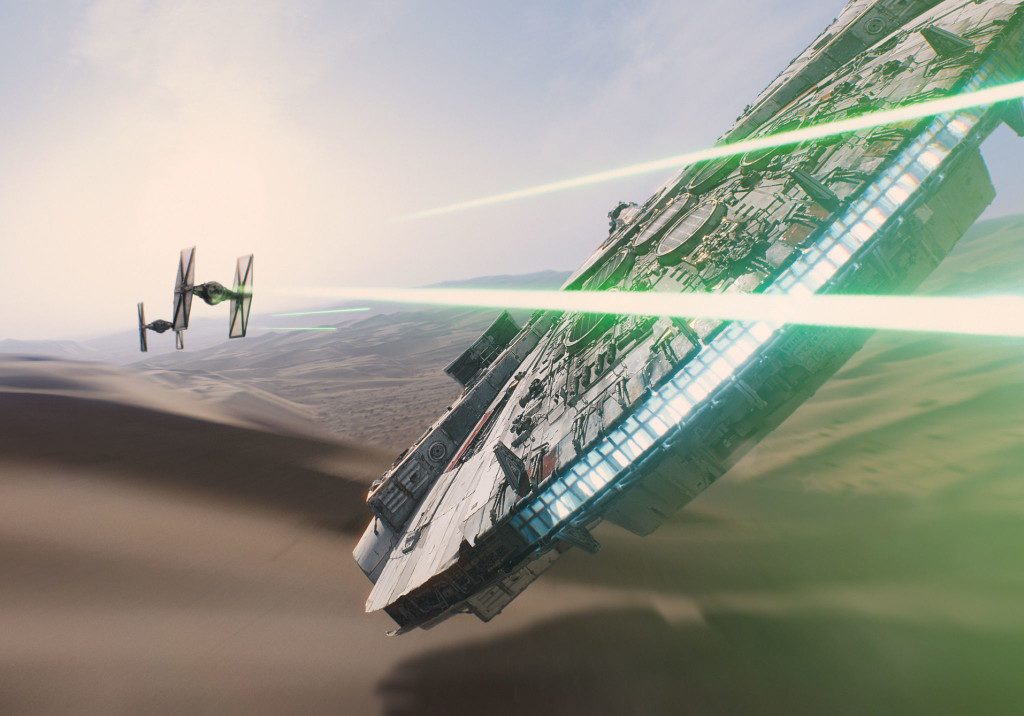 The film’s score, composed by John Williams, is pretty much a classic right out of the gate. His ability to capture and amplify the emotions of our beloved characters through music has only gotten better with age. The film recycles many of the classic Star Wars themes, such as the title theme, and the theme for the Force, but with subtle variations on each that make them feel fresh without lessening the emotions that they invoke. The theme that he has composed for Rey almost does a better job of characterizing her character than her entire time on screen over two hours does.

My final thoughts? Star Wars: The Force Awakens is a movie that’s overflowing with energy, enthusiasm, and passion for the Star Wars of old. The material presented on screen is so satisfying on so many levels that it is hard to not fall in love with the film that J.J. Abrams has created with his team for us. I knew from day one that he was the man for the job, because I knew that he, like me, was a huge Star Wars fan. Is the film perfect? Absolutely not. The pacing is crazy fast, and many of the film’s most interesting secondary characters get lost in the cracks as the momentum builds. The humor at times can almost be overbearing, and the plot quickly falls apart if you choose to sit down and tear it apart piece by piece. For each point that I’ve brought up that’s amazing, I could easily, as a fan of the former Expanded Universe and just Star Wars in general, find counterpoints and problems that are glaring issues to a guy like me. And yet, Star Wars: The Force Awakens succeeds in a way that it transcends above it’s critical issues. It’s one of the few films of this magnitude that has really met the hype head on. The film is fun, confident, and exciting. It leaves me with an unsatisfiable hunger for more, something that I haven’t felt since I screened The Dark Knight during the summer of 2008.

For an opposite opinion on The Force Awakens, check out the “Dark Side” review.